For someone who has lived in the West all my life, I find myself travelling all over Singapore quite frequently for work. After all, they always say the best food is in the East. Well, this time, my food journey led me to Hougang. I had to make a journey that’s over an hour-long just to reach that part of Hougang’s suburbs, and locate a little coffeeshop situated under Blk 435A. 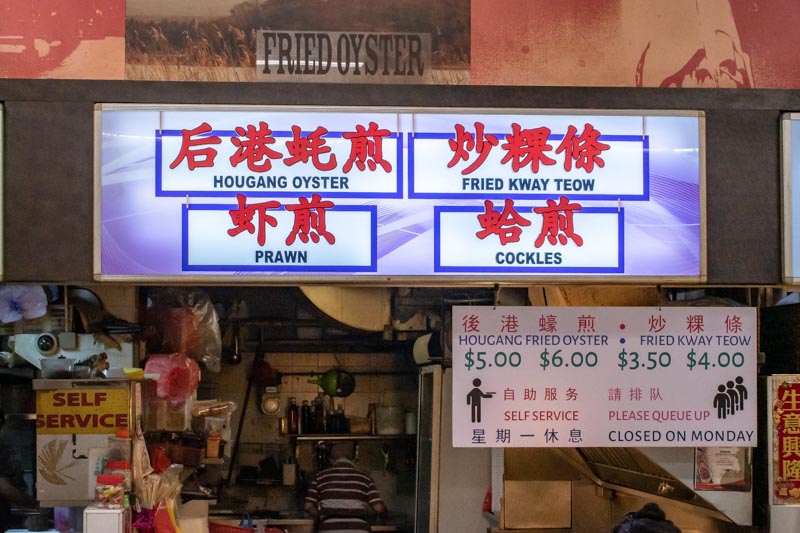 What Hougang Oyster Omelette & Fried Kway Teow is famous for is in its name—well, it’s actually the only two dishes they sell—oyster omelette and fried kway teow.

We’re still in the middle of a pandemic, so the sparse patronage of the coffeeshop wasn’t much of a surprise. Helmed by Mr Ong and his wife, Mdm Lim, this humble stall was the only one with a queue when I arrived at 1.30pm on a weekday.

The couple started their oyster omelette and fried kway teow journey 30 years ago at a pasar malam stall, and they’ve never stopped since. Observing the operations as I waited in line, it was fascinating to note how well-oiled they work as a team. Mdm Lim whipped up a storm and dished out order after order of fried kway teow, while Mr Ong took charge of frying up the oyster omelettes. Normally, diners can opt to add their desired portion of the housemade chilli. However, to keep in line with COVID-19 safety measures, Mr Ong will ask if you want chilli with your oyster omelettes instead.

As I watched diners before me place their orders, I realised that there’s also the option of prawn omelettes too. The first thing I noticed as I slid the plate of Oyster Omelette closer was how plump and huge the oysters were. Each piece was the size of my thumb! I actually got the S$5 portion, but it was already such a generous serving.

Served fresh out of the wok, I recommend digging into this plate once you get it—you wouldn’t want it to get cold. To fully appreciate the flavours, I scooped up egg, potato starch and an oyster in a huge first bite. If you’re a fan of oysters, this will make your day. Fried with pork lard, this oyster omelette was absolutely fragrant and mouthwatering. I liked that there were more crispy bits than gooey pieces—I’ve always found the gooey bits much less satisfying. But the highlight of the dish is, of course, the oysters. Plump, and bursting with briny flavour, these had to be the biggest oysters I’ve ever seen in orh luak. They were really fresh too, with a palatable creamy mouthfeel. When my husband tried this orh luak, he commented that even though the oysters were good, it can get a little overwhelming if you’re popping the oysters without much of the egg. Well, more for me then! I particularly liked how fresh and juicy the prawns were. The natural sweetness of prawns made this omelette variant more likely to appeal to the average diner. One thing I noticed was that the Prawn Omelette was slightly drier than the Oyster Omelette—to be expected, of course, considering the texture of prawn and oyster. Finally, if you’re here for a full meal, you can go for the Fried Kway Teow. I ordered the S$3.50 serving, and it was certainly hearty enough. I was slightly disappointed though, as the Fried Kway Teow didn’t really contain much wok hei. The dish came with lup cheong (Chinese sausage), fish cake, and hum (cockles), which made a decent meal. The cockles, in particular, added a hint of briny fresh flavour to the dish, so I’d recommend keeping your order as is—“mai hum” at your own risk!

While the Fried Kway Teow was nothing to write home about, I have to say that most of the diners were here for the prawn and oyster omelettes anyway. I only wish that I stayed nearby because I can just imagine ordering a plate of Oyster Omelette and sitting down to a hearty weekend breakfast.