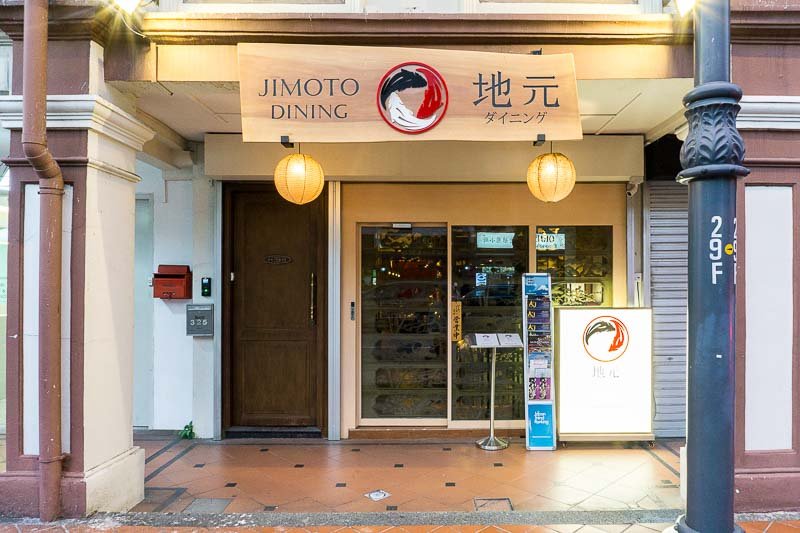 As someone who has never called the East of Singapore home, I love every opportunity to explore the food scene that every East-dweller raves about. I was pleasantly surprised to stumble across Jimoto Dining during my incessant Google hunts for new places to feed my always-hungry self.

Located in Joo Chiat, the entrance is a little easy to miss, save for the large wooden sign that hangs above. The space within seats a maximum of nine at a time at the counter, and omakase dining is the style of dining that runs the business. 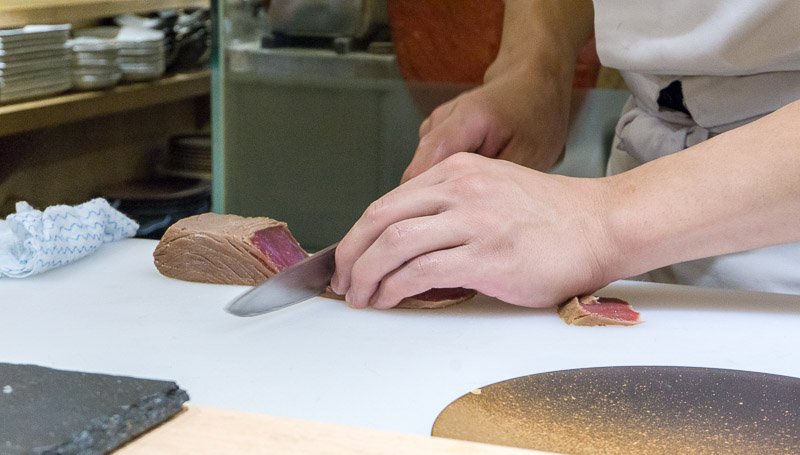 Tokyo-born Takahiro Sato is at the helm of your dining experience, and for someone who used to be a soccer coach, he finds great joy in seeing that his culinary creations bring smiles to both new diners and returning regulars—something he holds a lot of pride in.

I love the experience of being seated front-row and centre to an omakase meal, having a lucid view of the adept skills of the sushi chef.

The sets here start from S$55 for a 5-Course ‘Toki’ Edition (available on Tuesdays to Sundays, from 6pm to 7pm). The rest are seven courses long, ranging from S$68 to S$98, to S$128, depending on how premium the ingredient and seasonality of produce.

We were offered the mid-tier S$98 set for the best of both the high-end and pocket-friendly worlds. 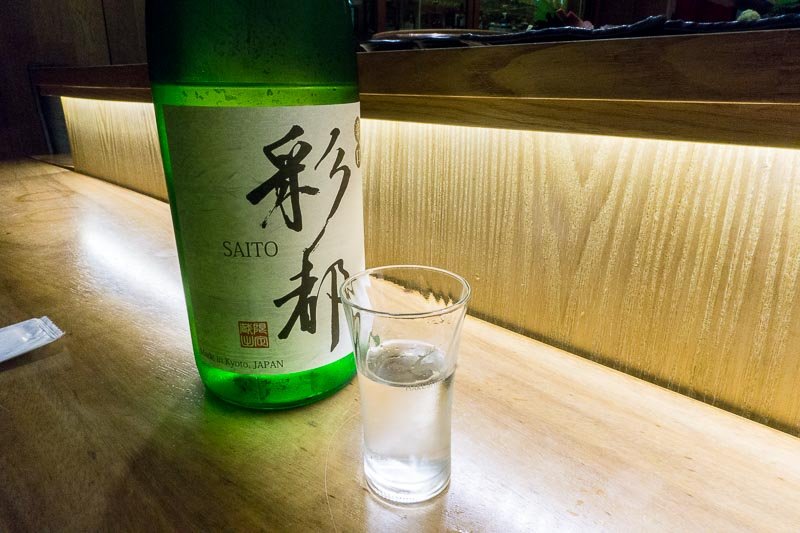 As a recommended tipple to begin our evening, the Saito Karakuchi (Kyoto) (S$9 per 90ml shot, S$38 per 36oml carafe) was a smooth, crisp housepour sake that had moderate sweetness and a balanced dryness. It was a nice way to wake me up after a day at work. The appetiser was a Tamago Tofu, drenched in century egg sauce and topped with tobiko (flying fish roe). The sauce was thicker in viscosity than, say, soy sauce and had a strong savoury flavour that surprisingly didn’t put me off.

I reckon it’s a sauce that could either win over your palate or diminish your willingness to take more than one bite. 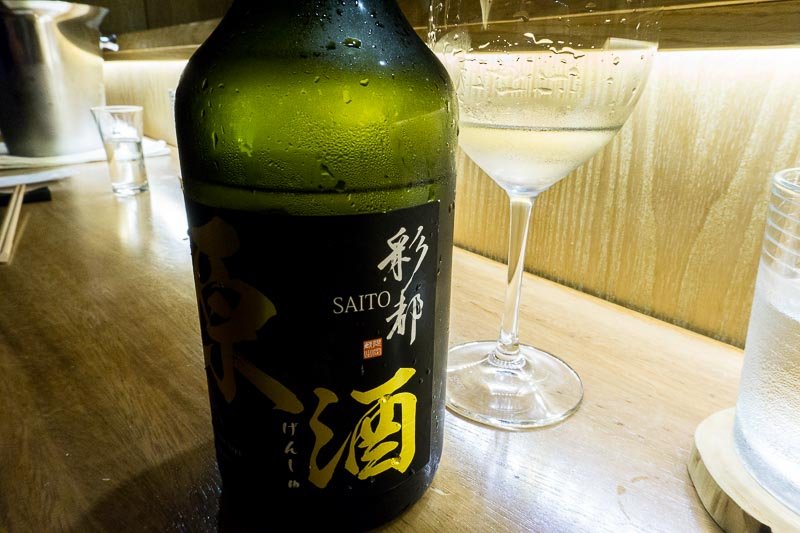 To go with the rest with our meal, we had this beauty—the Saito Junmai Ginjo Genshu (S$99). It was so flavourful, and had a robust minerality, with just a hint of tang at the finish. It complemented the fattiness and provided a tartness that proved to be well-balanced. Starting off with the staple of a Sashimi Platter, we had kurodai (a type of seabream), yellowtail, and torched tachiuo (scabbard fish). The kurodai had a firm bite, which contrasted to the yellowtail’s gentler and more tender texture. The torched tachiuo was my favourite, with its smoky exterior and naturally sweet flesh.

Even without the soy sauce, it was an absolute delight. 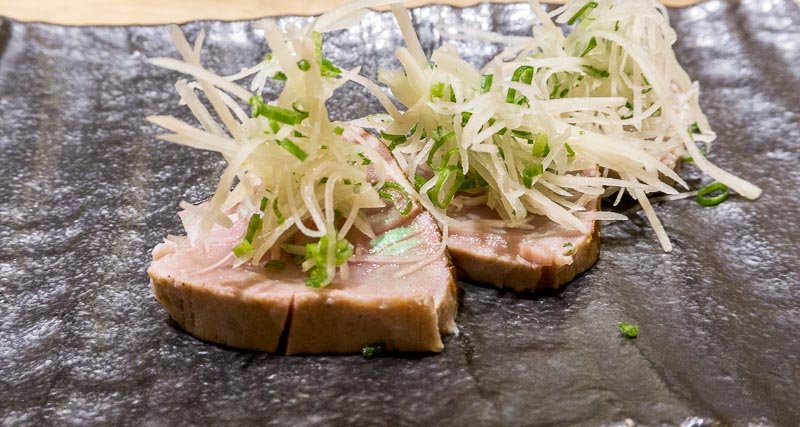 The Tuna Katsu Tataki With Ponzu Sauce was a familiar sight. However, I was pleasantly surprised to be met with a rainbow sheen, complete with a fragrant—almost floral—scent. The ginger and spring onion topping is best enjoyed with tuna and all, to have a harmonious bite of acid and fat.

The mellow spiciness from the ginger was invigorating and made this modest portion of fish a punchy number. 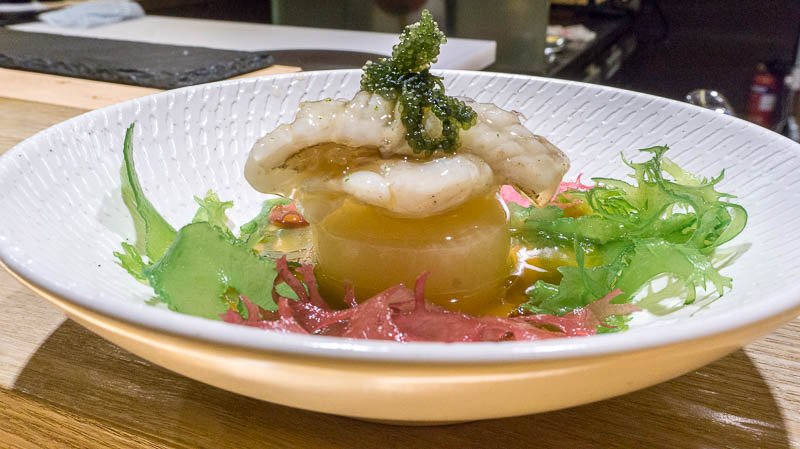 There was much confusion between my dining partner and me when this dish—that looked like it rose out of the sea—arrived. Sitting prettily atop a radish disc, was a succulent snapper drenched in a bonito–dashi sauce and crowned with seagrapes.

It was a soothing course, especially with the addition of the warm umami sauce. The burst of brininess from the seagrapes was a great addition—I could almost taste the ocean. Of course, the real star of the dish, the snapper, was flaky and ocean-fresh. The following segment showcased the proficient knife and sushi-rolling skills of Chef Takahiro as he dished out each sushi with deliberate finesse. The first of six was black seabream. It was cured in kelp and brushed lightly with soy sauce before being served.

The soy sauce proved to overpower the natural taste of the fish, which was a letdown. There was a nuance of kelp right at the end, which was as good as forgettable. 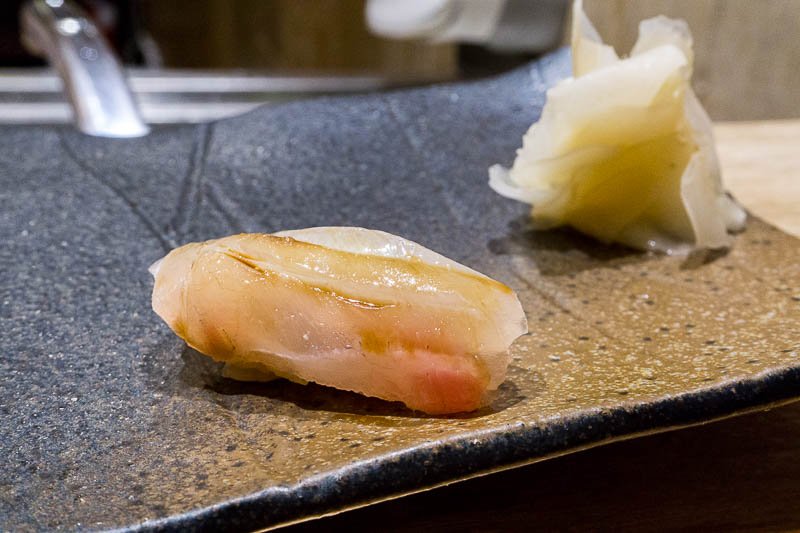 Aged fatty snapper made its appearance next. The fish was filleted, cured with salt, cling-wrapped and placed in the fridge for a week. It’s then wiped clean and refrigerated once more for a few days prior to consumption.

The result was a plump and hearty fish; one that wasn’t exactly juicy, but certainly felt meaty. Amidst a climate when we’re battling the woes of over-fishing, I felt guilty when we were served bluefin tuna. What made me feel a teensy bit better was that I had to make very little effort to chew. The pinch of Japanese mustard on top was sufficient to lend a punchy finish, but still, if I had a choice, I wouldn’t consciously order bluefin tuna. 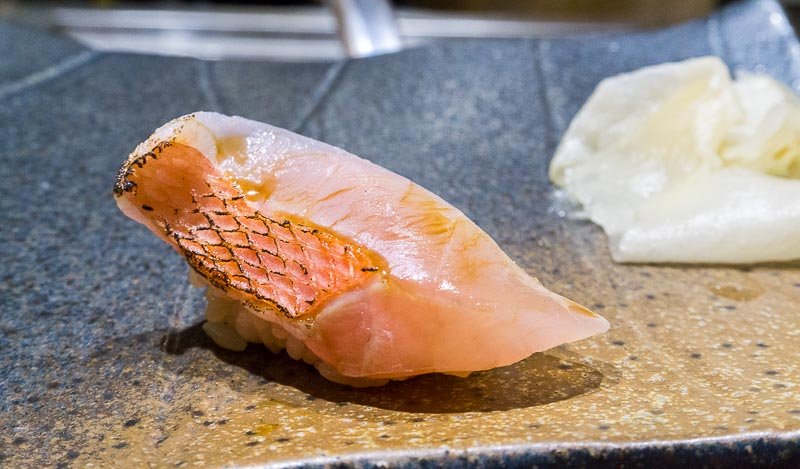 Blow-torched dishes in Japanese cuisine seem to always taste a million times better than anything on the menu, which is probably why the torched kimedai (red snapper) sushi was easily one of my top favourites of the evening.

Given it was a tad chewier than the rest, it still gave a fuller mouthfeel that left me incredibly satisfied. 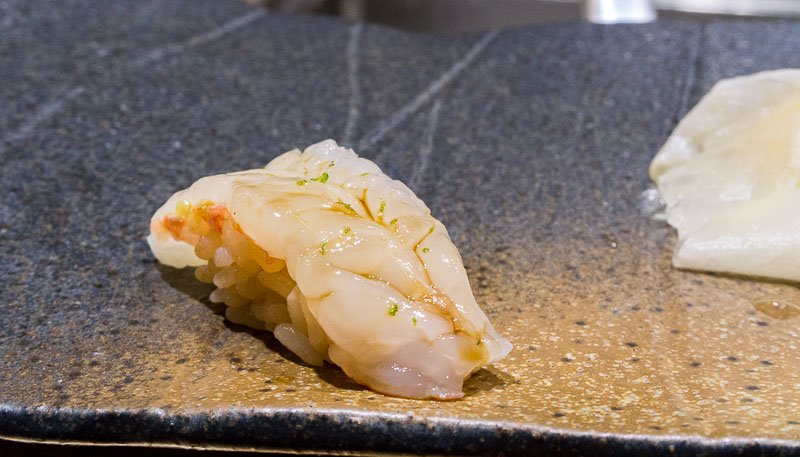 The Botan prawn with yuzu zest was a nice mid-meal pick-me-up, with its potent tangy notes that permeated the air as well as my palate. The prawn is cut edo-style and was still given an allowance to have its sweetness shine through. 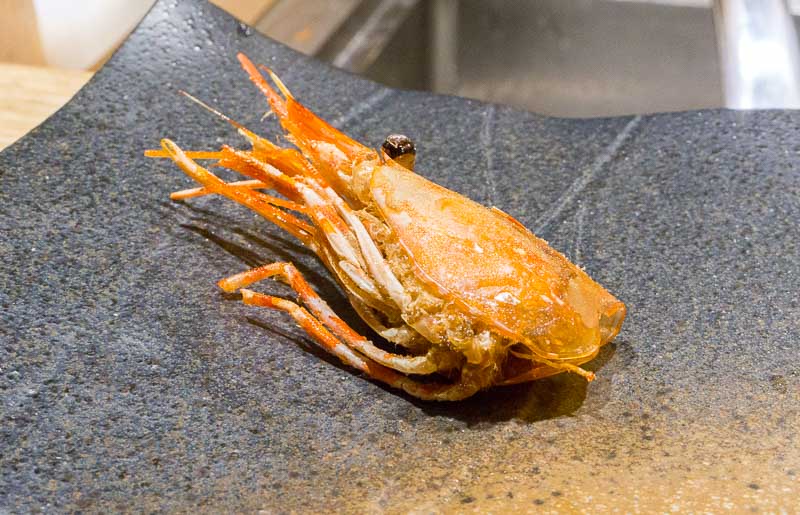 My top pick isn’t sushi by its technical definition, but it’s still a winner and it has to be the prawn head. I don’t favour it solely based on novelty, but for how exceptionally crunchy and savoury and sweet it was—all in a single bite.

The Hokkaido prawn tasted much like a cracker, and was thoroughly enjoyable from start to finish, right down to the last crumb. 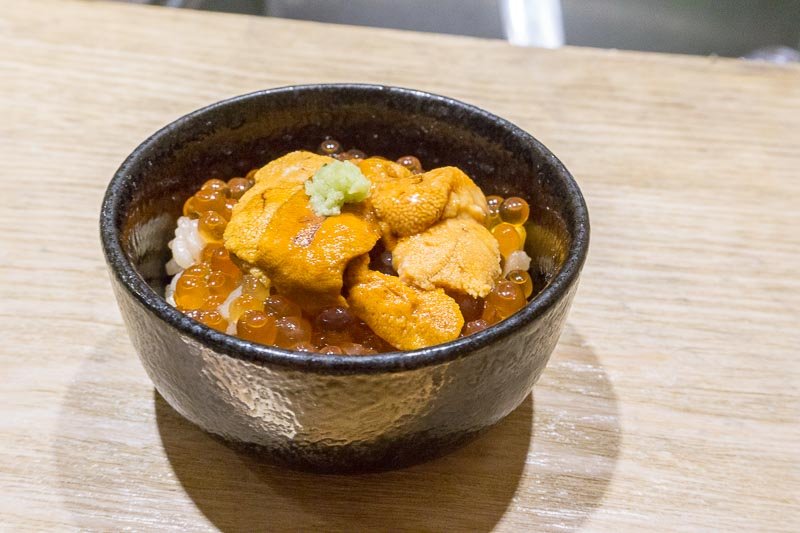 The final savoury dish was a miniature don, filled with Hokkaido sea urchin and salmon roe. The overall taste was intensely salty, especially for someone like me who doesn’t take to an abundance of salt in my food well.

The uni was luscious and creamy, although not as sweet as I would’ve preferred it.

Given that all its saltiness was attributed to its natural briny state, I still managed to finish it, but not without gulping down the remaining water I had left. 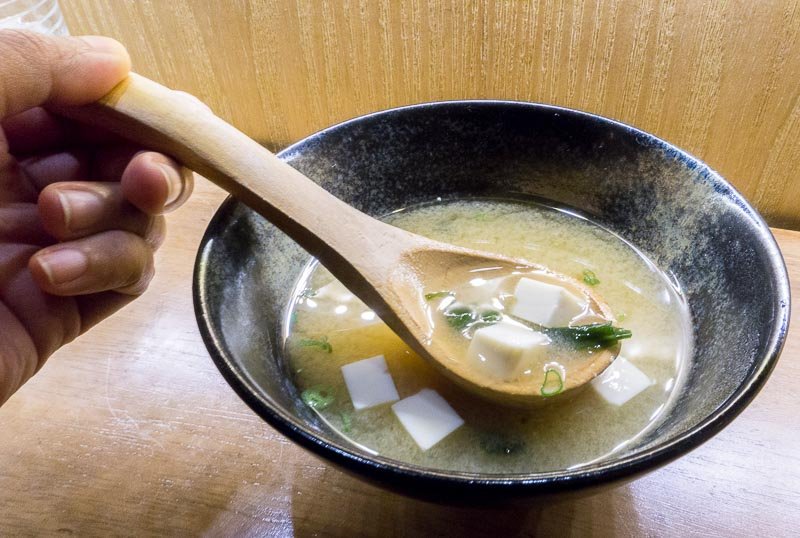 There was a standard serving of miso soup as well. It wasn’t impressive, nor did it deviate from regular ingredients such as seaweed and tofu, so I would’ve not been missing out on much if they took this dish out of the omakase offering. 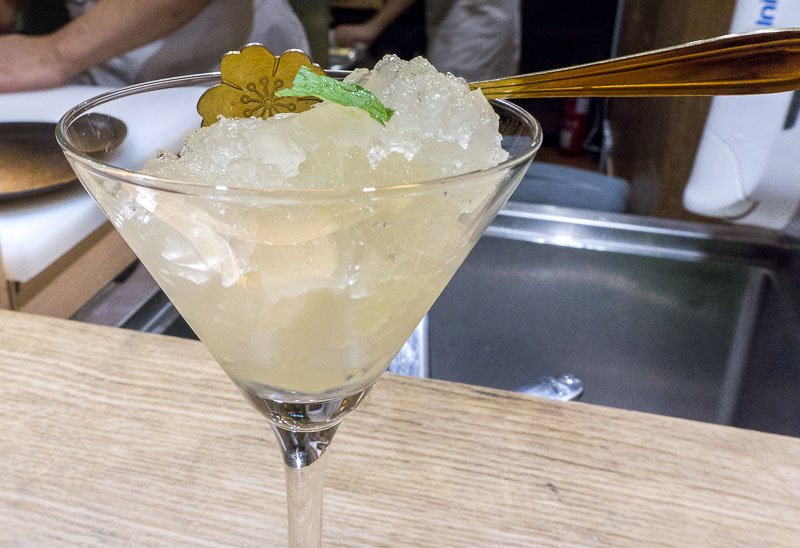 We finally arrived at the closing dish—a yuzu jelly. Straightforward and unpretentious, the yuzu jelly was adequately sour and could wake anyone from their impending food coma slump. The consistency was akin to agar-agar, which was rather off-putting, personally.

I had hoped for it to be a lot silkier, as opposed to gelatinous.

Why I’d never heard of Jimoto Dining prior to my visit, I’ll never know. It was one of the most hospitable omakase dinners I had the pleasure of enjoying and one that I would willingly visit Joo Chiat again for.

Although the menu is very lean, the varying omakase price points will be able to cater to a wider spectrum of clientele, which is a great crowd-puller.