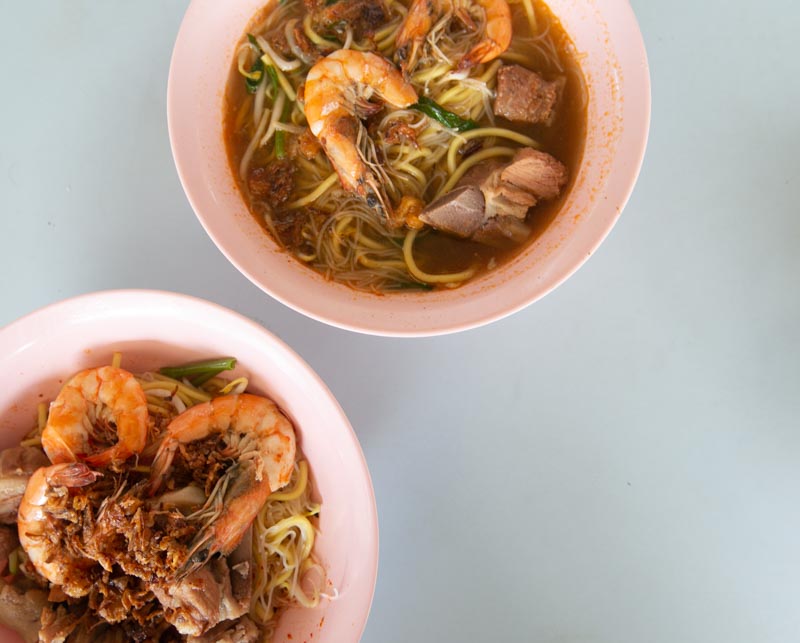 The glory of each local delight varies. There seems to be a definitive component that makes or breaks the dish.

For nasi lemak, it’s probably the fragrant rice. For laksa, it’s the punchy, full-flavoured soup. And for prawn mee, it’s really not quite the prawns or mee, but the pork bone broth that sets a stellar bowl apart from what’s only mediocre. 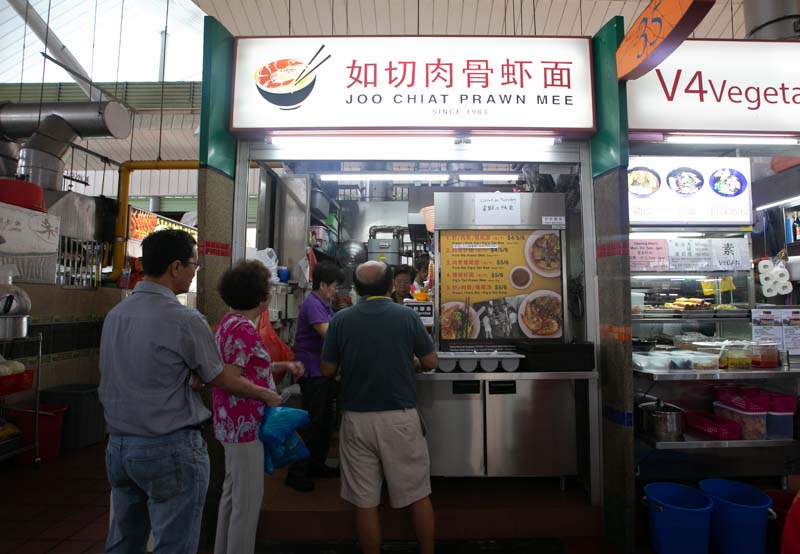 I’ve had prawn mee with pathetically bland broths; the lacklustre flavour lingers no more than a sip. But with a fair bit of skill and tremendous pride in their craft, some prawn mee stalls like Joo Chiat Prawn Mee has gained themselves a reputation for their lip-smacking broth.

Relocated at Ayer Rajah Food Centre after a brief hiatus, many will be enticed to know they are related to the owners of Blanco Court, Jalan Sultan and Beach Road Prawn Noodles. Quality at Joo Chiat isn’t affirmed because of these familial relations, but the fact that the current owner was taught by his grandfather, the man who started 545 Whampoa Prawn Noodles. 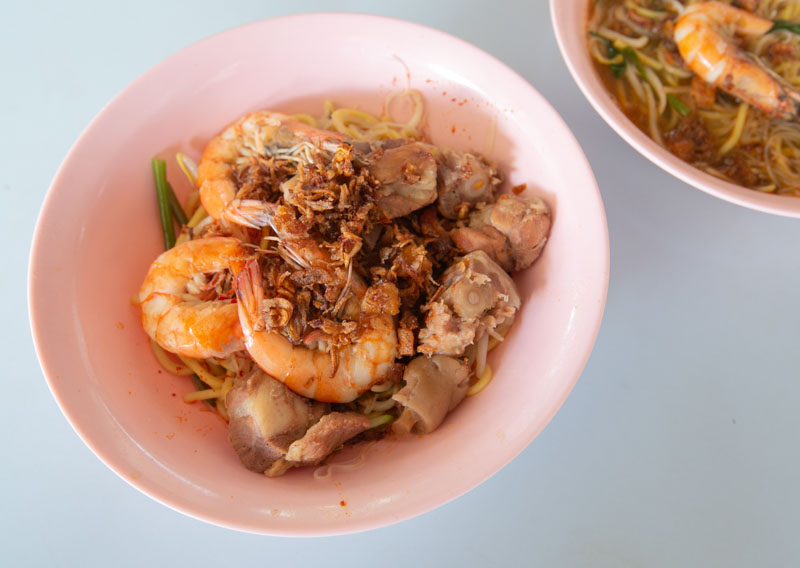 Setting the bar high for this stall was then inevitable. But we savoured the Prawn, Pork Rib & Pig’s Tail Mee (S$6) as objectively as we could. We had the combination of all three toppings, but you can always opt for less. 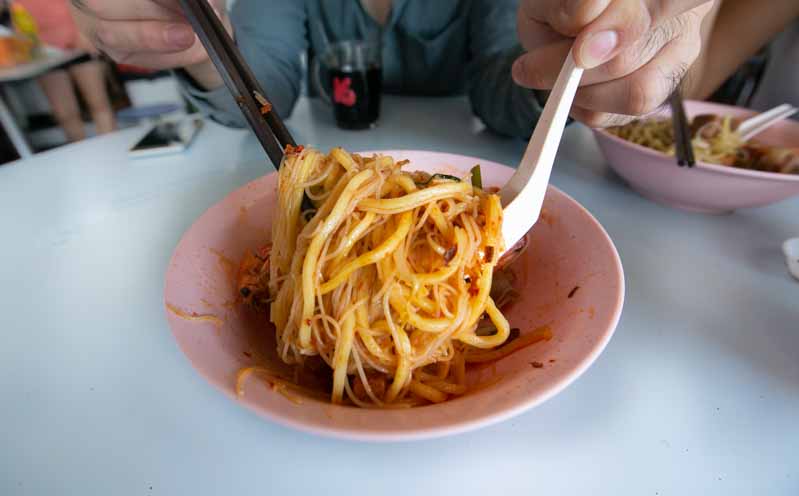 I’ve always had the preference of mixing both yellow mee and white bee hoon, as only having one or the other seems too overwhelming. Mixed well with the piquant chilli, the chowing down of the springy noodles was a pleasure.

First of all, brownie points to them for keeping their prices surprisingly affordable in spite of their brand and inclusion of big prawns, as that’s always an easy justification for other stalls to charge ridiculously steep prices.

While the prawns were undoubtedly fresh and the pig’s tail soft, I found the bak kut chunks were not as tender as I would’ve liked. 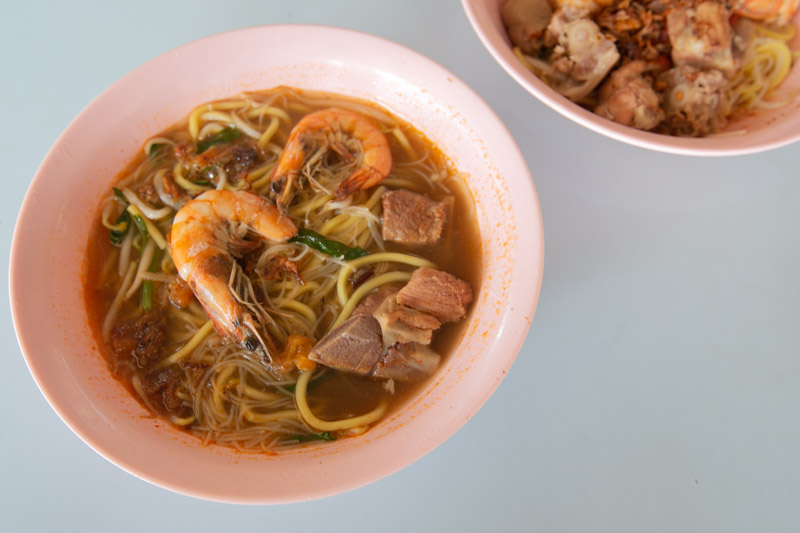 We tried the Pork Rib Prawn Mee (S$4) for the soup version. Everything else remained constant, ingredients-wise. But here’s where the aforementioned definitive components of the dish come to play. 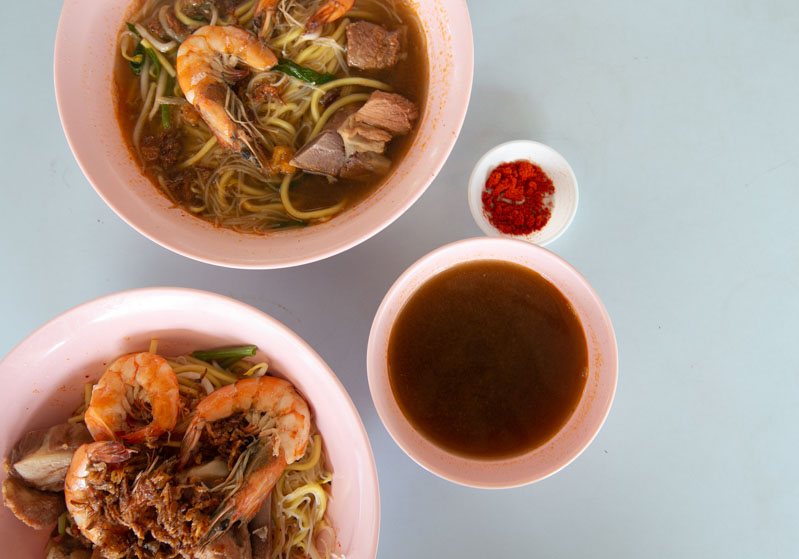 The word ‘murky’ probably doesn’t sound the most appetising, but quite befitting for the appearance of their flavourful broth.  The robust flavours of pork and prawn in the soup are evidently the fruit of many hours of boiling. Of course, while it is good on its own, a dash of chilli powder gives the dish another boost.

Surprisingly, the bak kut in this bowl was fall-off-the-bone tender. I suppose then it’s just a bit of a consistency issue that, in this case, be forgiven.

It’s not a secret, really, that we all have a favourite prawn mee stall. Either nobody else seems to be a worthy competitor or no other stall is better. Truthfully, I’m no exception. Beach Road Prawn Mee will always have a place in my heart while the recent discovery of No Name Prawn Mee has got me sold with amazing dry chilli mee.

That said, it’s only fair to include other prawn mee stalls in the running if they prove to have comparable standards. I suppose the benchmark for prawn mee will personally be the flavour of the broth, every other part done well will be commendable.

With Joo Chiat Prawn Mee, while I was not entirely bought over by their dry chilli mee, their soup version is definitely worthy of a title as one of the better ones.