Nestled along the stretch of eateries along Amoy Street is a modern European restaurant famous for dishes that intrigue both your taste buds and mind.

Tucked away discreetly along the back row, this restaurant’s entrance isn’t where most other places have their storefronts. It was quite a surprise when I first visited Maggie Joan’s because the entrance to the restaurant was quite inconspicuous.

The restaurant was quite cosy, with dim lights and an industrial-chic setting. It has a modern vibe with the kitchen lined like a metal cage and stone walls for that slightly stylish and sophisticated look.

The restaurant has recently welcomed their new Executive Chef, Zach, onboard, who has prepared a new line up of haute cuisine for their tasting menu. We managed to speak with Zach to find out more about his career in the food & beverage industry.

Chef Zach stayed in London for five years to hone his culinary skills and spent another 12 years in Australia and New York. He had initially begun his culinary career as a pastry chef.

His focus as a pastry chef made him use a variety of local ingredients wherever he was situated at, to create his dishes. He attempted to do the same in Singapore, but it was a challenge due to Singapore’s lack of agriculture.

For the new tasting menu, the restaurant focuses on using simple ingredients and reinventing them into dishes that seem like works of art. The new tasting menu is open to the public and incorporates various culinary ideas from Chef Zach. 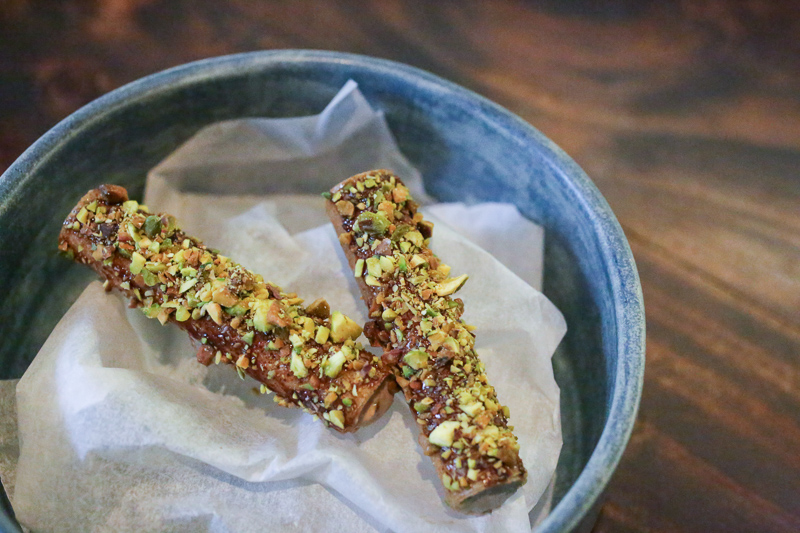 We began the meal with the A La Carte Snacks. We had the Chicken Liver Parfait Cigar (S$5 each) that was topped off with quince and candied pistachio.

The cigar was crisp when I bit into it and was relatively sweet with an earthy and rich flavour from the liver. The liver mousse filling was a smooth accompaniment to the light and brittle cigar casing. 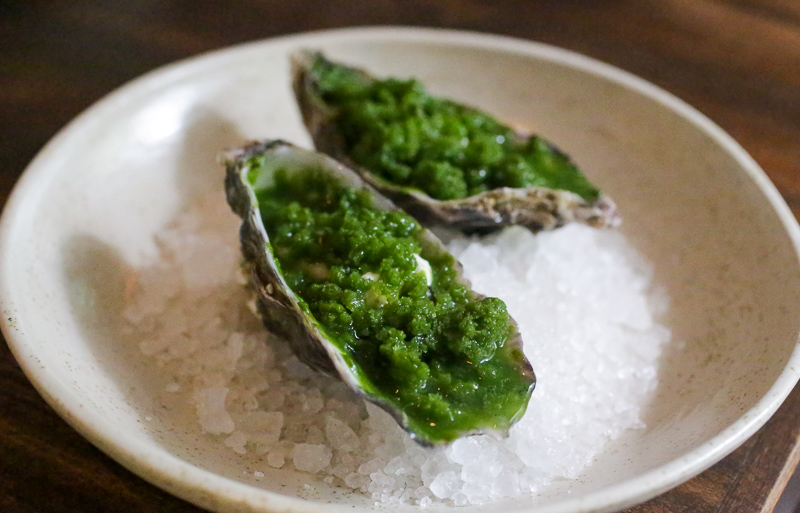 For our second snack, we tried the Coffin Bay Oysters (S$6 each). The oysters were drenched in a wasabi and parsley granita.

The granita complemented the oysters very well, with the wasabi bringing out the subtle sweetness and mild brininess of the oysters even more. The oysters were the absolute freshest and smelled as if they were just picked from the ocean. 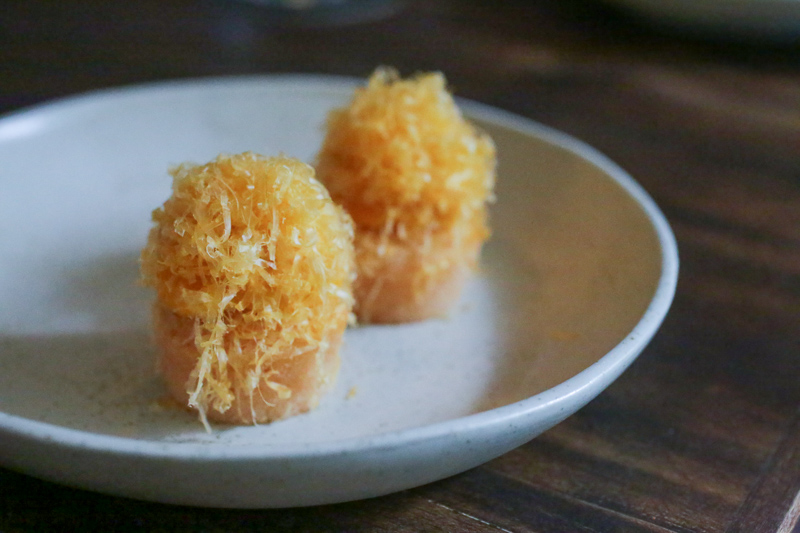 For the last of our snacks, we had the Squashed Financier (S$4 each). Made with macadamia nut and mimolette, this mini bite packs a punch of cheesy goodness.

Mimolette is a cheese that is traditionally produced around the city of Lille, France. These little savoury treats were also topped with shaved parmesan for that extra bite of fluffy cheese. 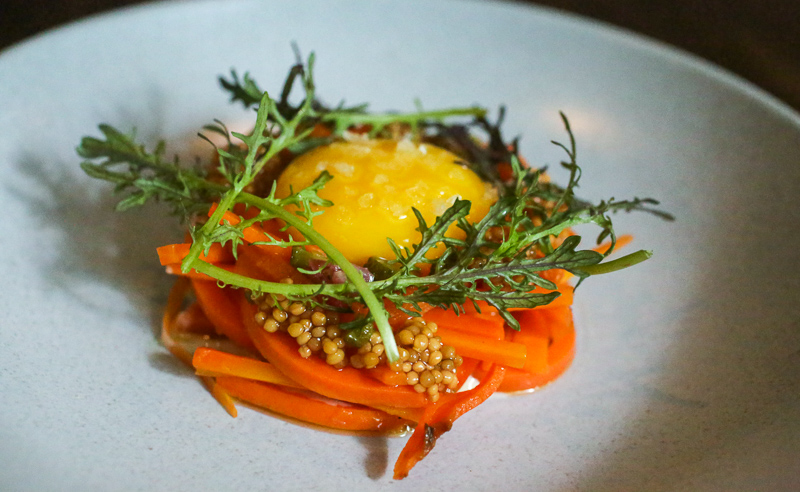 We began our entrees with a whimsical dish—Smoked Carrot Ribbons. The design of the carrot strips stacked up and constructed to look like a nest was absolutely ingenious. The carrots were tossed in a miso mix and mustard seeds were topped alongside the “carrot nest”. 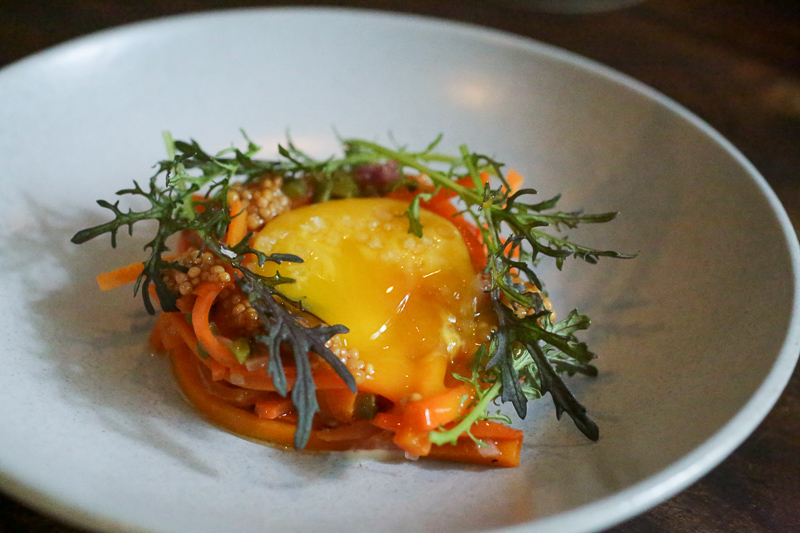 I personally do not fancy carrots, but this dish somehow worked really well for me. The miso overpowered the flavours of the carrot which made sure there wasn’t any off-tasting soapy aftertaste that I usually get from eating carrots. Moving on to the second entree, we had the Baby School Prawns. Freshly-chopped romaine lettuce and rosemary topped the prawns. The prawns were mixed in a sweet house-made marie rose sauce and tossed with diced green apples. 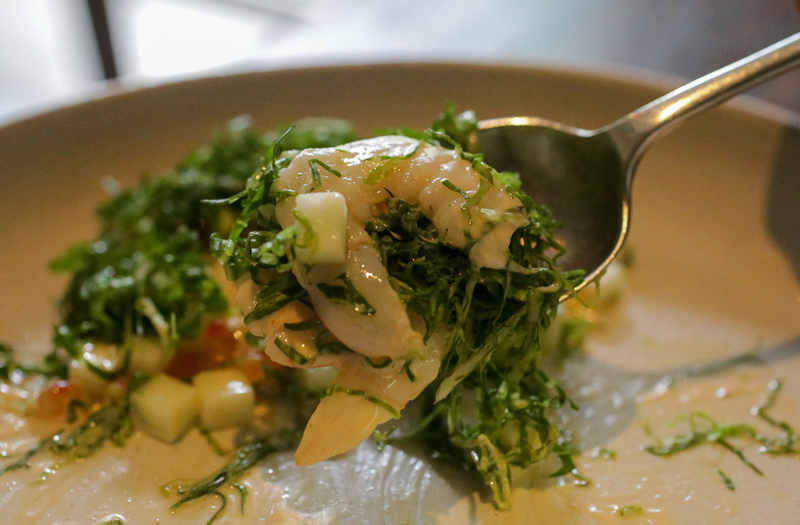 Marie Rose sauce is a British condiment often made from a blend of tomatoes, mayonnaise, Worcestershire sauce, lemon juice and black pepper. The entire dish was very refreshing and was one of my favourites. 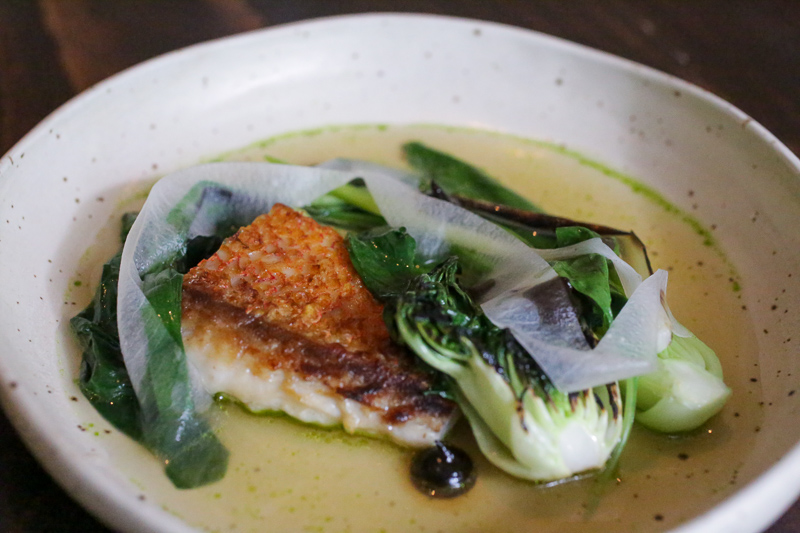 For mains, we tried two dishes, a fish dish and a beef dish. The fish dish was a Red Snapper, cooked until its skin was crispy, yet the meat still remained soft and was rather easy to pull apart.

The red snapper was accompanied by bok choy (Chinese cabbage), grown in Singapore. Chef Zach was actually quite pleased with this dish.  It’s usually quite hard to obtain local greens to use in dishes, since Singapore usually imports our ingredients.

The delectable salty black garlic paste paired well with the dashi broth and was the perfect condiment pairing for the slightly charred bok choy. This dish definitely reminded me of cooking at home and stood out as comfort food for me on this tasting menu. 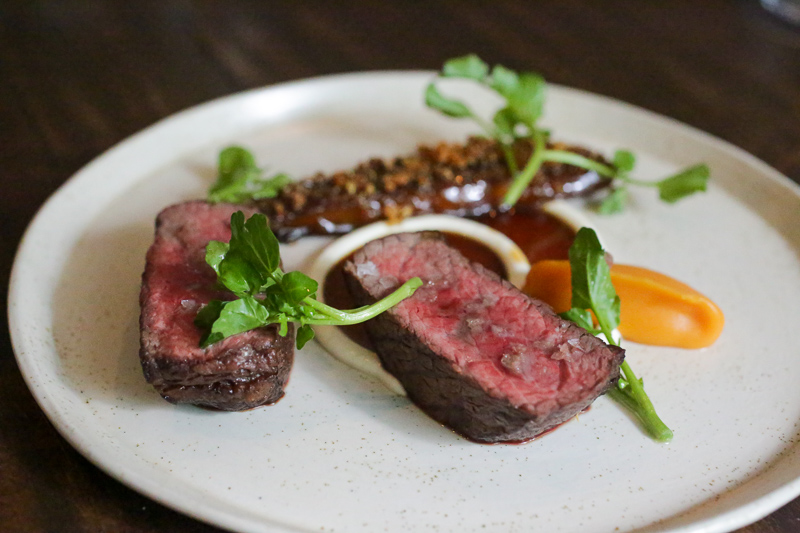 The other main dish we had was the Black Angus Beef—alongside the meat was glazed eggplant, sweet potato and quinoa. 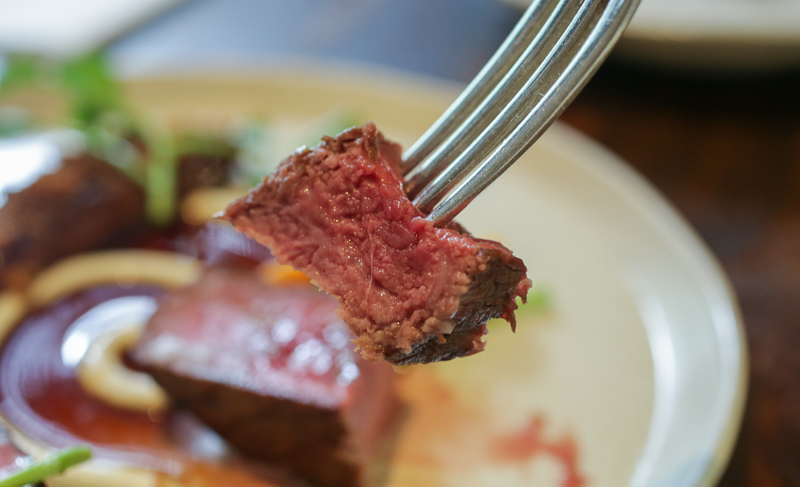 I’ve never been a fan of eggplant and so it was my least favourite portion of the dish. The eggplant was glazed in a sweet teriyaki sauce and topped off with crispy quinoa that I fairly enjoyed. In contrast to the slimy and soft texture of the eggplant, the quinoa brought some crunch to the dish which balanced out the textures well.

The sweet potato puree wasn’t very sweet and had quite a subtle starchy taste. I would have definitely liked it to be sweeter. 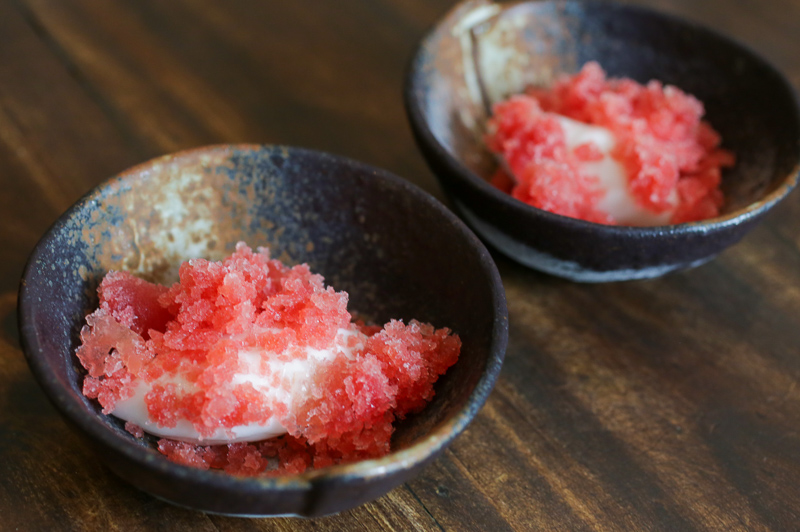 When trying out a tasting menu, it’s common to have palate cleansers so that you can more accurately assess the flavours of the individual dishes. Maggie Joan’s makes fantastic palate cleansers that could almost substitute dessert.

We had the Lime Sorbet and Raspberry Granita, and the sour and slightly bitter flavours of the palate cleanser felt like the perfect dessert for me. 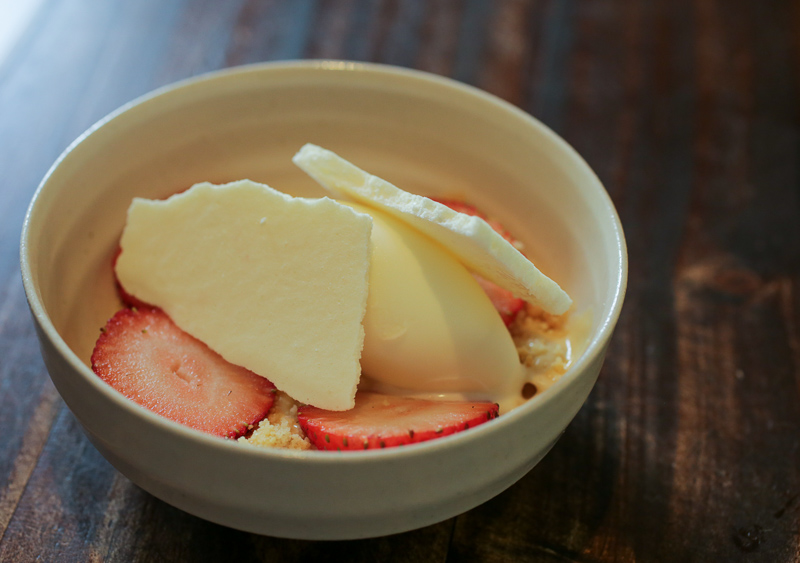 For (actual) dessert, we had the Strawberry & Baked White Chocolate. If you’re a fan of strawberries and cream, this dessert is the perfect sweet finish to your meal.

The sweet and mildly sour flavours of the fresh strawberries complemented the creamy white chocolate ice cream and meringue pieces, making it a light and refreshing dessert that will still satisfy those of you with a sweet tooth.

Chef Zach’s presence at Maggie Joan’s has definitely given the restaurant a new perspective for its tasting menu. I’ve tried the previous tasting menu and the new one is clearly different in terms of dish concepts. I’m definitely going back to try out the other dishes on the tasting menu.