In light of celebrating International Women’s Day on 8 March 2020, we bring to you 6 notable women in the F&B industry: how they rose to success, and how some of them dealt with discrimination in the male-dominated industry on their way to the top.

At just 23 years old, Chef Aeron Choo started her own omakase sushi bar, Kappou Japanese Sushi Tapas Bar, and she has been labelled one of Singapore’s youngest female chefs to start a business in the F&B industry.

Dubbed the “terror chef”, I have to say that Chef Aeron Choo is anything but “terrifying” when she’s not behind the counter. She left for Japan with a PSLE certificate at the young age of 17 years old. With big dreams to become a sushi chef, she trained to obtain a Japanese culinary diploma and pooled savings to start her own business back in Singapore. 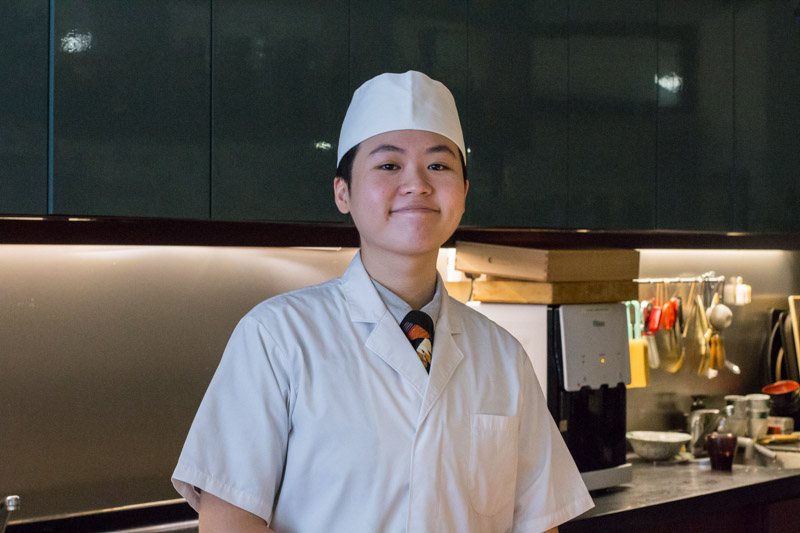 Working as a woman in the F&B industry doesn’t always mean sunshine and butterflies. Chef Aeron Choo had a lot on her plate when it came to defining her status in the kitchen—and the literal scars to prove it. I personally feel like her experience in the kitchen was harrowing, yet it moulded her into who she is today.

Constantly being reminded that she was a woman and had to respect their men’s rules, it was undoubtedly a tough experience being a woman in the kitchen of a sushi restaurant in Tokyo. She had to share a dormitory with the men and it was tough for her to use the toilet. She even had to shave her head, as per culture for sushi chefs in Tokyo. 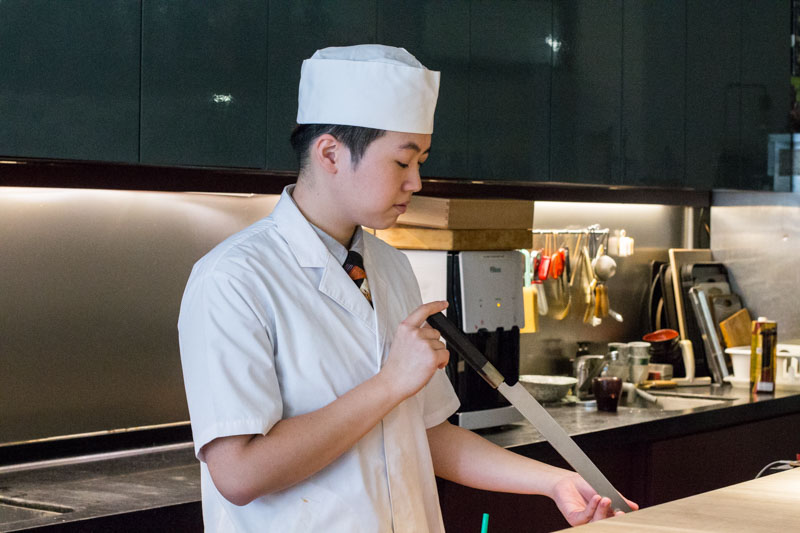 Of course, discrimination comes in many forms, and with Chef Aeron Choo, it was judgement from the men in her kitchen, as well as her own customers till this day. She told us that a customer expressed doubts about her skills as a chef, just because she was a woman. This happened just a few days before our interview with her! Talk about biting the hand that feeds you.

Because of this, she felt like she had to prove her worth in other ways, by staying sensitive and being a perfectionist to compensate for the fact that she can’t lift heavier items like many male chefs can.

She wouldn’t do anything differently if she had the chance to, though. A strong believer of living a life with no regrets, she is headstrong about following through the path she chose. She wants to see more young women in the industry and her advice is to always seek self-improvement. Our verdict? You go, sister.

Alysia Chan is The Black Swan’s head chef, and she also has stories to tell about being in a male-dominated industry.

One of the founders of The Anna Alliance, she seeks to support other women in the same position as her—a female chef in the F&B industry.

When she was in culinary school, she was rejected by a male chef and barred from working at his restaurant when he found out she was female. He didn’t want women working in his kitchen, and she felt a little offended by it.

However, she’s now the head chef of the modern European chophouse The Black Swan and has the power to enforce change within the dynamics in her kitchen. Implementing gender-blind hiring and a strict open-door policy, Chef Alysia Chan ensures that all her staff are treated equally and with respect.

With a higher status and a more respected name in the industry now, Chef Alysia Chan is making use of her voice to sound out and support people like her in the industry through The Anna Alliance. She’s also a panelist at various talks pertaining to gender discrimination and women’s issues in the workplace; truly, a strong and inspiring character that we should look up to.

If you’re big on local brands, you would probably have already heard of pastry chef Janice Wong. Dubbed one of Asia’s most talented pastry chefs, Chef Janice Wong opened 2am:dessert bar at Holland Village in 2007. She also appeared on Masterchef Australia as a guest chef for contestants to replicate one of her signature dishes, the cassis plum.

In 2014, she launched her eponymous sweet concept, JANICE WONG and recently launched her new concession stand at the world-renowned Harrods department store in London in 2018.

Graduating from the acclaimed institution Le Cordon Bleu, Chef Janice Wong decided that she wanted to establish a greater appreciation for desserts. If you haven’t heard of her famous Chocolate Crayons, these delectable treats are popular with the little ones. It’s an innovative candy that people can interact with! It’s exactly as the name suggests—delicious art material children can use to draw and taste at the same time.

The well-respected pastry chef doesn’t only wish for people to savour her desserts and appreciate them. It’s important to her to stay true to her roots and base her creations on her experiences and memories as a child.

Chef Janice Wong found that while it was tough being a woman in the F&B industry, it’s not as bad in Singapore because the supportive community is encouraging towards local brands. Of course, like any other business, the obstacle she faces is expanding to larger countries like Japan, Korea and London.

Thankfully for her, she didn’t have to put up with discrimination at her workplace for being a woman because she was always in a positive environment where she could grow with the team and in her work.

Chef Janice Wong’s short piece of advice for young girls who want to start a business in the F&B industry like her? Diversify, and plan for the long term.

Chef Josephine Loke also has an interesting story to tell. With big dreams to become a food writer, she set out to learn more about the F&B industry in culinary school, but that’s where things changed.

Her passion for food grew and as the cliche goes, the rest was history. Starting off with an internship at Pollen @ Gardens by the Bay, she worked her way all the way up. And now, she’s donning the title of Chef de cuisine (Head Chef) at 665° F, Andaz Singapore.

The Culinary Institute of America alum believes that drive, passion and determination are of the utmost importance when it comes to getting ahead in this industry. She adds that being a chef is not as glamorous as it seems, requiring a lot of hard work and dedication to achieve success.

It was challenging for her to make her mark at the start of her career, but her abilities managed to shine through, gaining her the respect of her colleagues.

The challenge was that of being a chef. With that being said, her current goal is simple: keep moving forward. She wants to push 665° F to explore the boundaries of what a steakhouse can do.

She leaves one piece of advice for young and aspiring female chefs: just do it, and don’t let anyone tell you no.

Currently the head chef of modern European bistro Botanico, Chef Sujatha Asokan began her days in the kitchen at the young age of six years old. She is considered one of Singapore’s youngest head chefs, currently running the kitchen at the age of 29.

When she was younger and regularly visiting her extended family in Kedah, Malaysia, she got to help out in the kitchen with her four aunts, enveloping her with the brilliant sights and aromas as they cooked up a storm in the kitchen.

With female culinary mentors encouraging her and imparting various skills and culinary knowledge to her, fortunately, it seems like she didn’t encounter the nastier side of being a woman in this male-dominated industry.

She kick-started her career at the age of 19 at Stellar at 1-Altitude, and did stints at Pollen and Esquina before settling down as head chef at Botanico.

Attributing her control in the kitchen to her height of 180cm, she also adds that many of her other female colleagues at her previous stints were assigned to dessert and pastry, or put in the cold kitchen because women are stereotyped as having soft and gentle hands. Lifting heavy pots and manning grill are feats only men can accomplish in the kitchen. Or so they say.

In the Botanico kitchen, Chef Sujatha Asokan believes in supporting people and putting herself in others’ shoes to fully understand how they are feeling, especially when it comes to her staff. That means she’ll do her best to ensure there’s no discrimination in her kitchen. As of now, Botanico houses a petite girl who is working on the grill and she seems to be enjoying it.

Having more power and control in the kitchen allows Chef Sujatha Asokan to push back against the stereotype that men do better in the kitchen, and has shaped her to be as motivating as her former mentors.

She is now the executive head chef at COMO Dempsey  and imparts her wealth of culinary wisdom to her fellow coworkers. With 12 years at COMO under her belt, she possesses many skills in cooking international favourites and is determined to make every dining experience memorable through her passion for cooking.

This Bhutan-born chef was raised with a go-getter attitude and believes that nothing is impossible as long as she works hard and follows her passion, despite the challenges she faces.

She has the mindset that nothing is considered discrimination to her as long as she loves what she’s doing and it’s refreshing to hear that she has never had major incidents where she was mistreated or discriminated against from her account!

Even if she faces discrimination, she overcomes it by letting her work speak for her. Highly-skilled as she is, no one has anything to nitpick on because this forward-thinking chef has already done whatever’s needed to ensure proper workflow.

When asked about which dish she’s the proudest of, she simply chuckled and said that every dish is important to her. Taking pride in every dish she puts on the table, Chef Tshering Lhaden is dedicated to giving her all when it comes to serving up plates of food at COMO Dempsey.

If she had some advice she could give to young girls who aspire to be a chef in the future, it would be to take risks and to learn from failures. Let your work define you as a chef in the kitchen, chase your dreams and watch everything fall into place. Definitely some words of encouragement we all need!

In this day and age, it’s great to see more and more women thriving in the F&B industry. With so many preconceived notions of it being a male-dominated industry because of the hard work and manual labour attached to the job scope, we have to realise that women are capable of making amazing dishes, just as men are.

Let’s all work together to support women in the F&B industry and continue to laud the remarkable women in our lives—after all, they deserve it.

Previous articleChiChi: Burnt Butter Ang Kar Prawn & Other Homely Dishes at Telok Ayer
Next articlePlay With Delightful Desserts by Janice Wong Singapore in the Comfort of Your Own Home