Qantas Airways: Hop On-board Australia’s Largest Airline & Be Overwhelmed By The Hospitable Warmth From Down Under 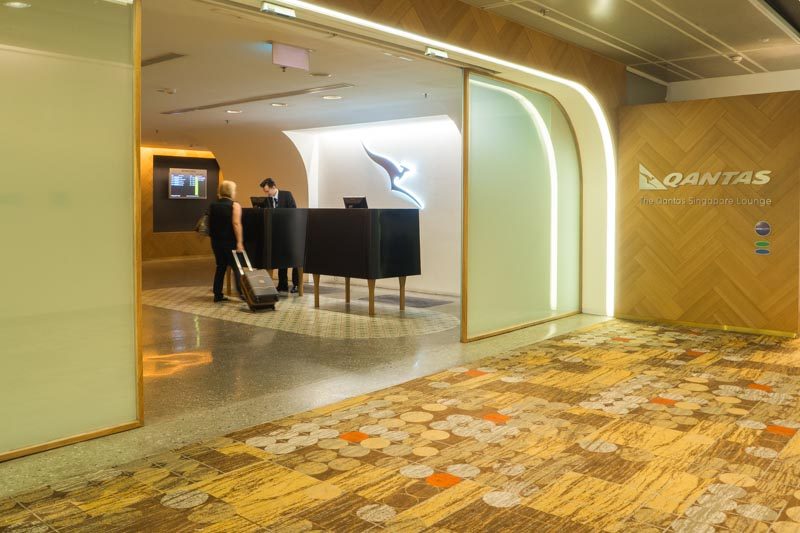 When I heard that we were flying via Qantas to Melbourne, my first thoughts were on whether or not the service from the cabin crew would still be impeccable — I fondly recalled the first time I flew with Australia’s largest airline to Perth and was well taken care of by the thoughtful staff who made sure that I had the kid’s amenity kit to get me through the five hours of flight.

I know… it’s been eons, but if it left such a long-lasting impression on me as a mere child then, it must have probably been the best experience I’ve had out of all the flights I’ve taken so far. We were very fortunate to have been placed in Business Class (thank you, Qantas for making my wish come true!), and had the chance to experience the full hospitality and warmth known to Australians — right from when we checked-in and then at The Qantas Singapore Lounge. 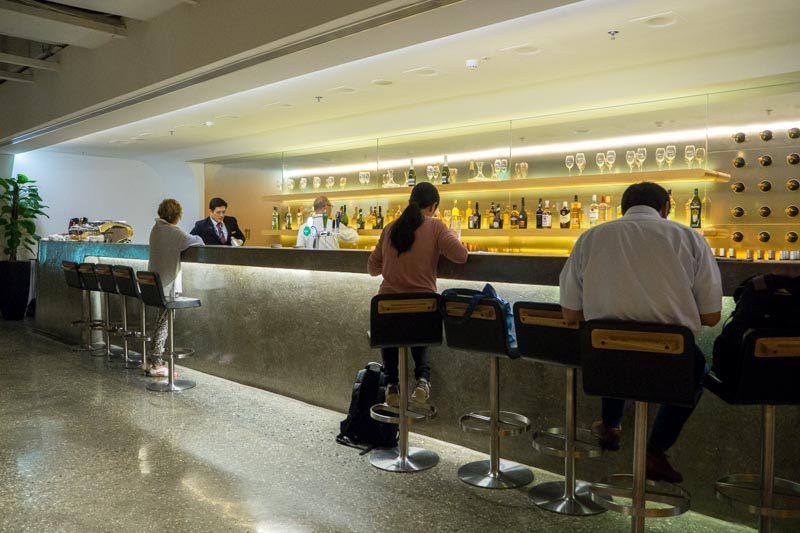 We were greeted at the entrance with a cocktail to freshen ourselves up and to get rid of all the pre-flight jitters. If one glass isn’t quite enough, you can sit by the bar counter and order any spirit of your choice to unwind before boarding time arrives.

We’ll have you know that drink carts will frequently be pushed around, making sure everyone’s well-watered; psst, don’t forget to try the cocktail of the month. 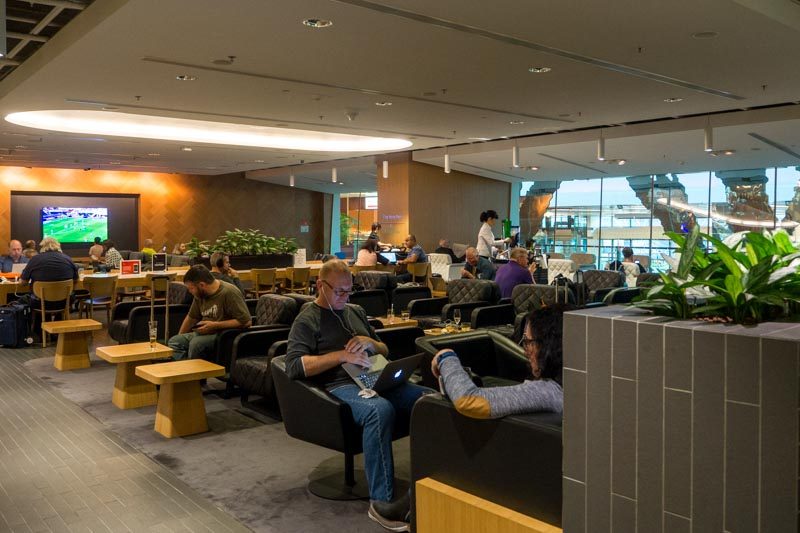 The lounge has plenty of space to kick-back and relax in, with vast tables and chairs scattered around the premise. 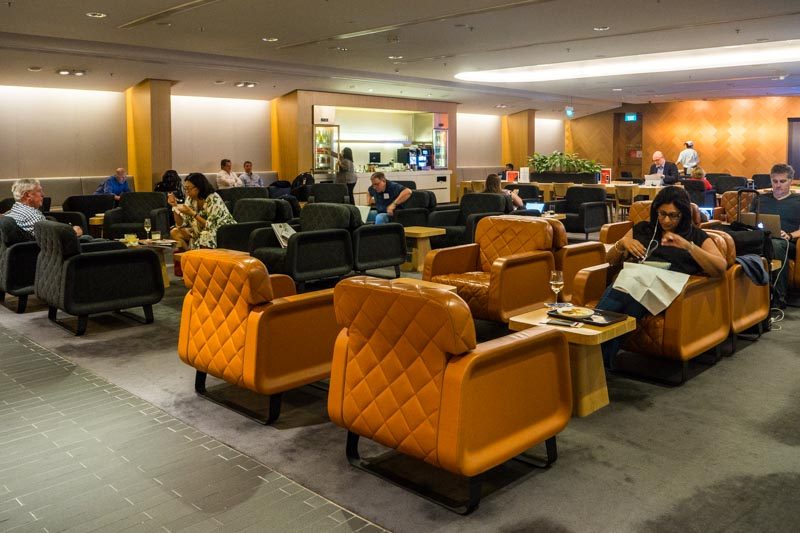 The quiet area is perfect for those who want to get away from the chitter-chatter for a little privacy, or just to finish up some work. The tables are adequately lined with power plugs so you’ll never have to worry about losing any unsaved work if your laptop is low on battery.

There’s a small refreshment bar within the room itself, where guests can enjoy a pour or two, or sodas and hot beverages. 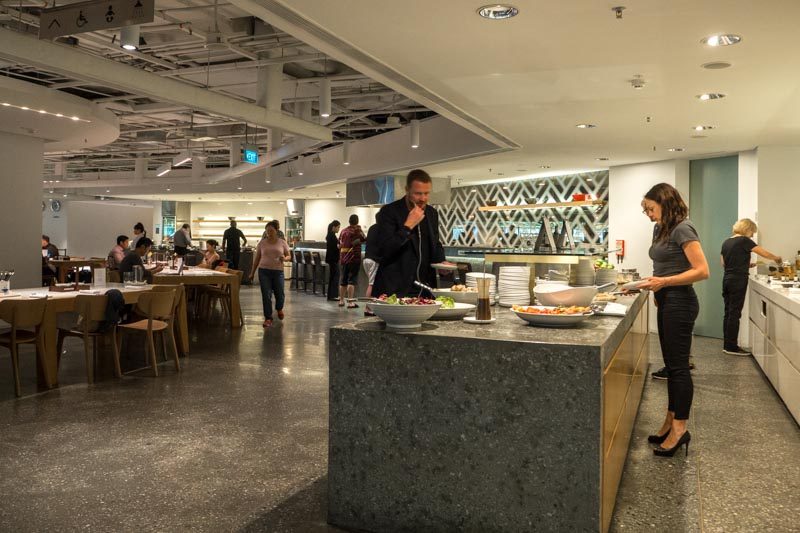 If you’re feeling peckish, the dining hall is stocked with light bites, as well as hot dishes from the mini buffet line, offering different types of cuisines and vegetarian options. We ordered the monthly specials from the live cooking station, which was featuring laksa and tangy shrimp buns at our time of visit.

Time seemed to pass so quickly at the lounge, and not long after we had to make our way to the boarding gate to catch our flight to Melbourne.

Aboard Qantas A330 Aircraft 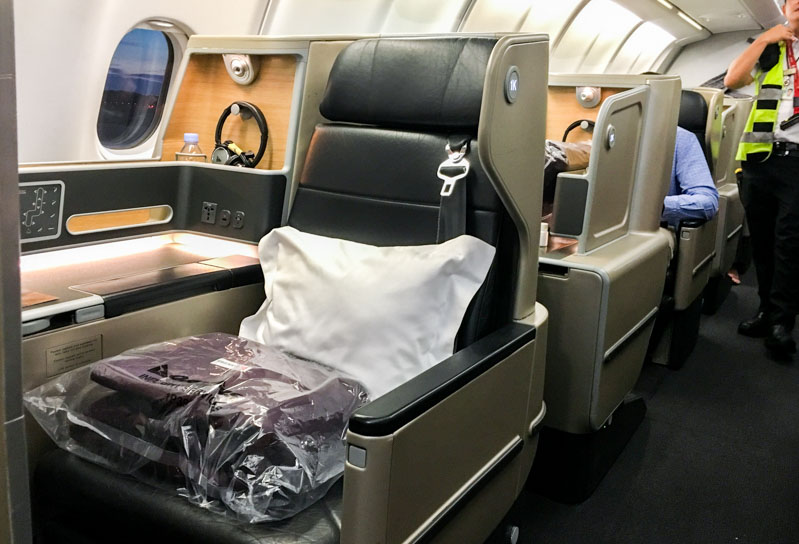 The Business Suites in the A330 aircraft were designed with optimal privacy — being a hermit, I loved that the middle row seats had a centre divider so that I wouldn’t have to worry about disturbing my neighbour at any point of time during the flight; but mostly so that I could sleep in an unglamorous fashion without caring if I would be judged.

The seats come with a blanket and a full-sized pillow and the skybed would be prepped with an additional layer of bedding when I was ready to sleep. Headphones and a water bottle are kept at the side, and a couple of electric plugs and USB ports are at the ready to keep gadgets fully charged.

The seats are spacious and have ample compartments to stow away personal items, while allowing me to keep them within an arm’s reach. The table at the side is wide enough to work on your laptop if you wanted to. I was impressed (once again) with the Qantas amenity kit that was wonderfully put together and consisted of an eye mask, a pair of socks, hand cream, and other products from ASPAR to keep my skin hydrated and smelling great throughout the flight.

A set of pyjamas was also provided for the night flight and I brushed my hands across the cottony soft jammies and knew that it would make my night’s sleep all the more comfortable and snug. 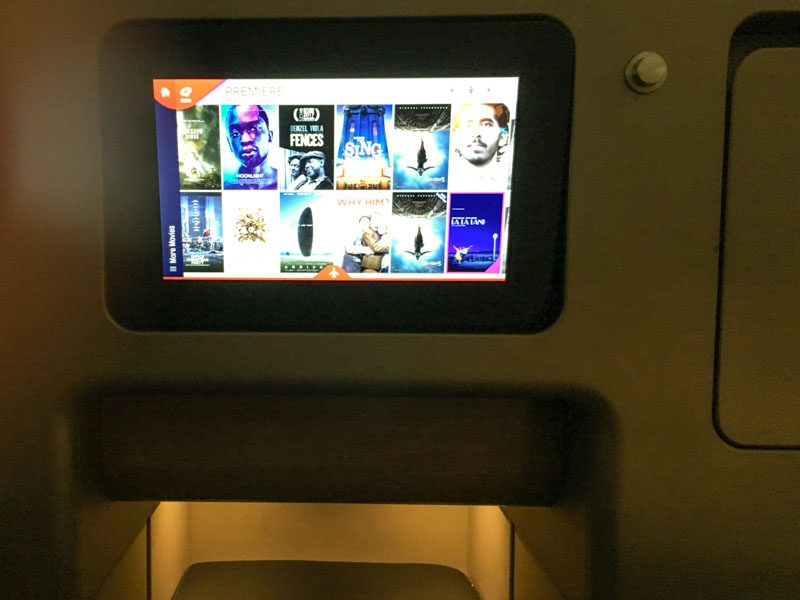 At no point in time did I feel bored or restless as the in-flight entertainment was really up to date. Boy, was I glad I managed to catch some of the latest movies and TV shows that I’ve missed out on during the seven and a half hour flight. The comprehensive Rockpool-inspired menu by Neil Perry had a list of drinks available, as well as main plates and sweet snacks. 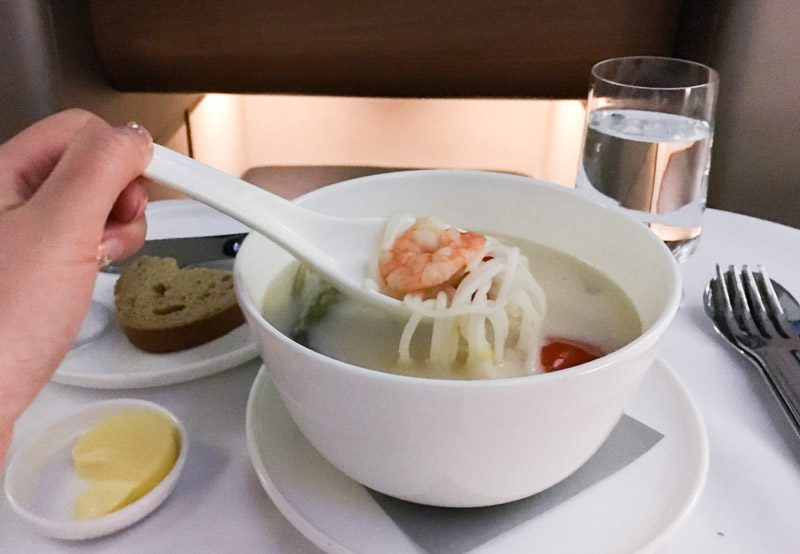 I wanted something hot and decided to place an order for the bee hoon soup with snapper, prawns, fishball and chilli padi.

The broth instantly warmed me up with the spice from the chilli padi that was mixed into the soup instead of being served on the side; if you can’t take spicy food, you might want to consider other items on the menu. 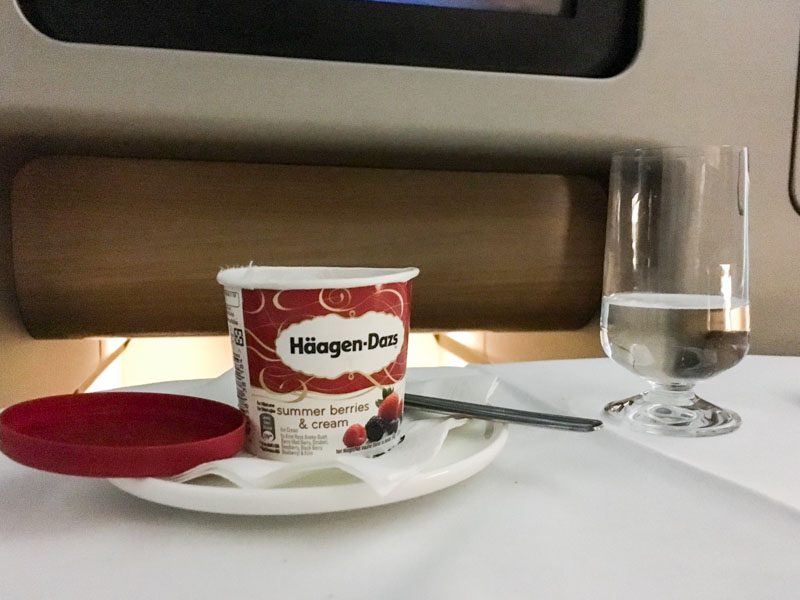 Haagen-Dazs ice cream was available on the sweet menu, and I ordered it without hesitation to off-set the spiciness.

After all that good food, I felt my eyelids getting heavy from the impending food coma, and I was ready for a snooze. 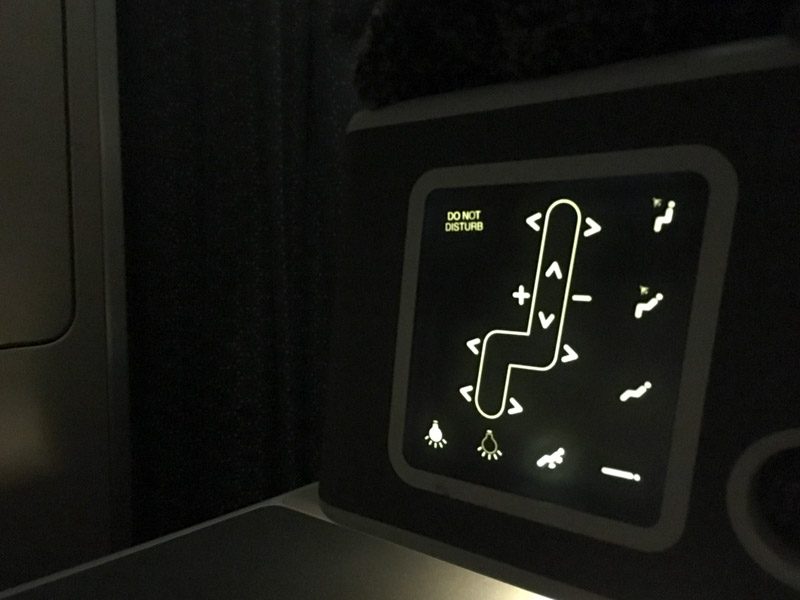 The multi-function settings on the seat control board let you toggle between reclining, propping your feet up, or lying down flat (it really felt like I was in bed). The other buttons include a back massage, and adjusting the seat to precise angles of your preference.

You can even request to have the bed made before boarding, which means that you can catch your sleep right from when you board the aircraft, and take off on the fully-flat bed — no more having to keep the seat upright at an uncomfortable 90 degrees. 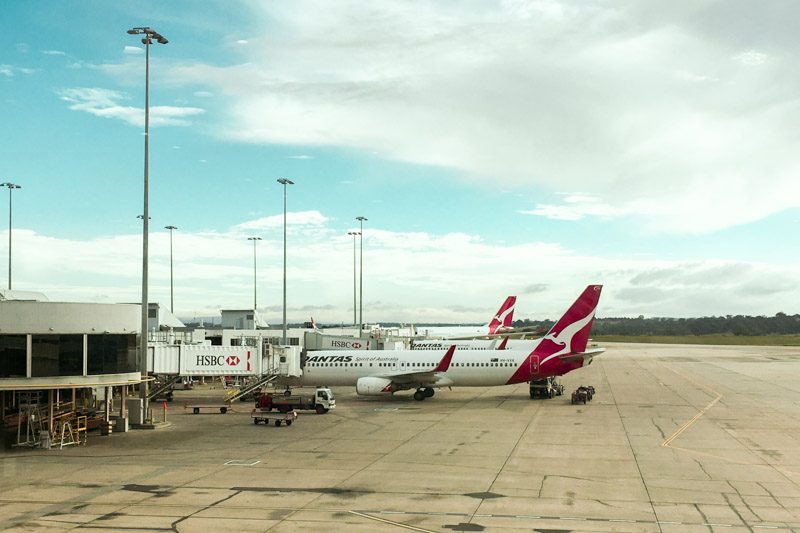 I was thoroughly impressed by the full in-flight experience and couldn’t wish for anything more than this. The crew that were serving me really paid attention to detail and made sure that my needs and requests were met.

Another from our team was flying in the Economy Class as well, and had nothing to complain about, falling asleep pleasantly all the way till we arrived in Melbourne.

Keep your eyes peeled for the next article as we divulge a whole different side of the colourful and vibrant city of Melbourne!

Return flights to Melbourne from Singapore start at S$1,055 for Economy, and S$3,800 for Business (prices include taxes, fees and carrier charges). You should also check out all the other flight deals to various parts of Australia that are departing from Singapore.

Join The Qantas Club to enjoy access to the Qantas Club Lounges and Business Facilities, with individual memberships starting from AUD$400 (approx. S$410) a year, totally value-for-money if you’re a frequent flyer.

Previous articleBird Bird: This Wholesome Fried Chicken Restaurant In Kembangan Will Have You Lickin’ Your Fingers With No Regrets
Next articleMichelin Bib Gourmand 2017: The Second Edition Brings You 38 Restaurants & Street Food Joints That You Must Try In SG