Shake Shake In A Tub: Nostalgic Combination Of Fries With Soft-Serve Ice Cream At Yishun

Born out of a wholesome concept that celebrates the unorthodox, you’ll get to re-discover the little joys of having crispy french fries dipped in a yoghurt-based soft-serve at Yishun!

Shake Shake In A Tub is a home-grown brand that will playfully annoy your friends who disapprove of this odd food combination. 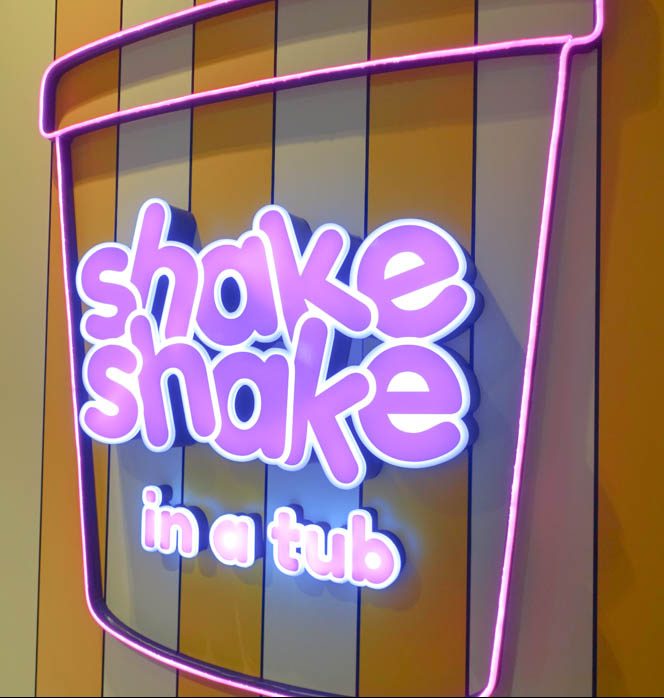 We visited the food kiosk to find an already decently-sized crowd already present. The kiosk is situated in an MRT connector and attracts significant foot traffic. The establishment promises fast and fresh cooked-to-order french fries when you order. We were prepared to test that claim. 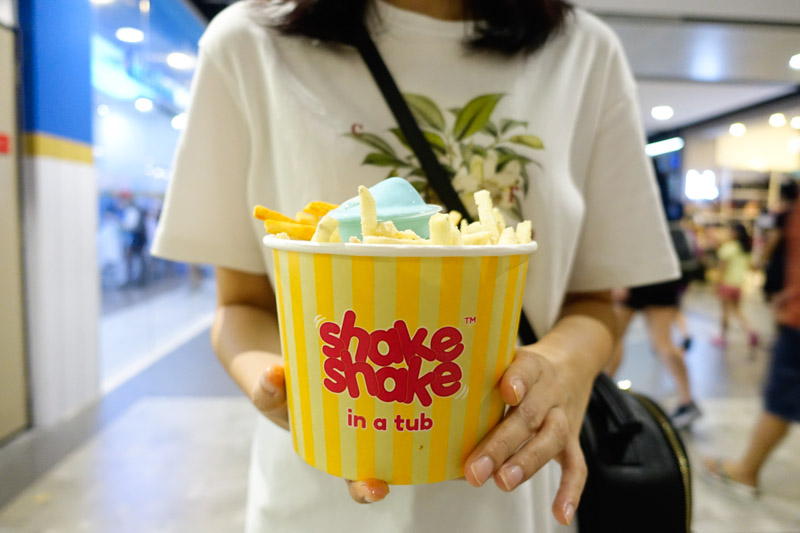 The fries come in eight different seasonal seasonings. We excitedly found that the following are its current offerings: Mala, Salted Caramel, Kimchi, Sour Cream & Onion, Truffle, Barbeque, Cheese, and Curry. Having a giant-sized order of fries entitles you to choose any of the three flavours mentioned for your fried potatoes.

We opted for the shoestring fries’ Giant-Size Tub (S$9.80) that comes with an ice cream flavour dip of your choice and a separate yoghurt soft-serve in a waffle cone. For the fries’ seasonings, we promptly selected the Mala, Truffle, and Sour Cream & Onion. 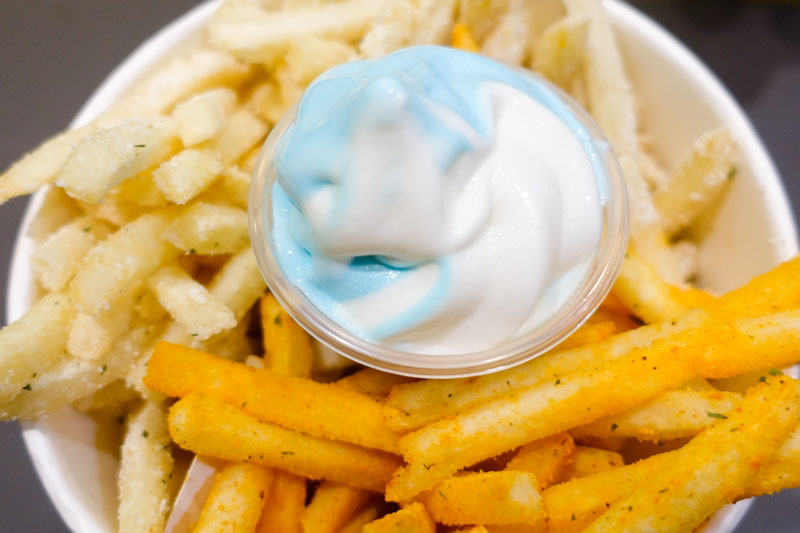 We took the eating experience away from the busy MRT connector and spent some time walking in the mall as we consumed our fries. Logistically we felt that it didn’t really work. The tub demanded that we ate our fries faster than the ice cream melted, which proved to be quite an unpleasant experience as we soon found out.

The owner explained that they had bought a specially-commissioned fryer for use at the kiosk that removes excess oil from the fries efficiently. True enough, the fries were comparatively less oily than other fast food joints. The fries were crispy and came ready to be collected in under three minutes. 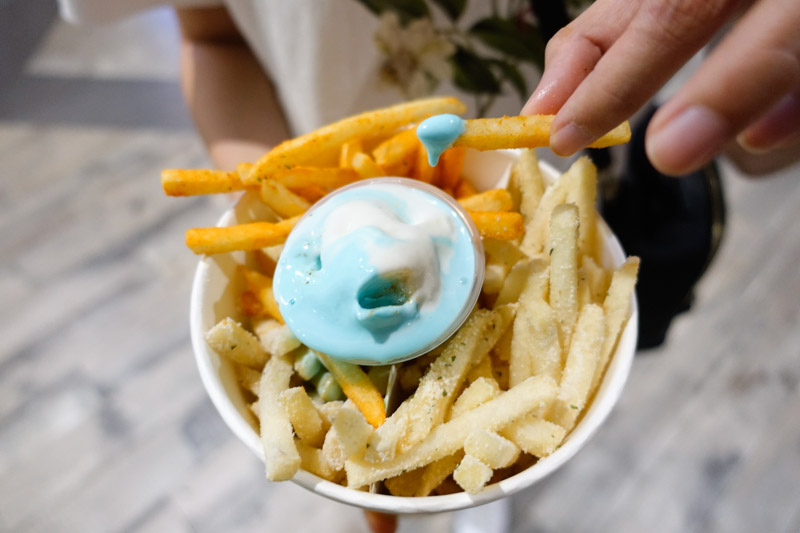 The mala fries immediately stung our tastebuds. My colleague described it as ‘zhong la‘ or ‘medium-spicy’ in reference to the real authentic mala experience. Complex and spicy with prominent sour notes coming through, we feel that they got the mala seasoning spot on with this.

We dipped it into the soft serve and found that it went together even better. Just like fire and ice, the two extremes contrasted purposefully in combination for a unique tasting experience.

Does anyone remember the unflattering McDonalds’ truffle-flavoured shaker fries from 2015? Shake Shake In A Tub’s Truffle seasoning is what it could’ve been if it were done right. Flavourful and bold, it had a strong truffle perfume and nuttiness flavour profile. 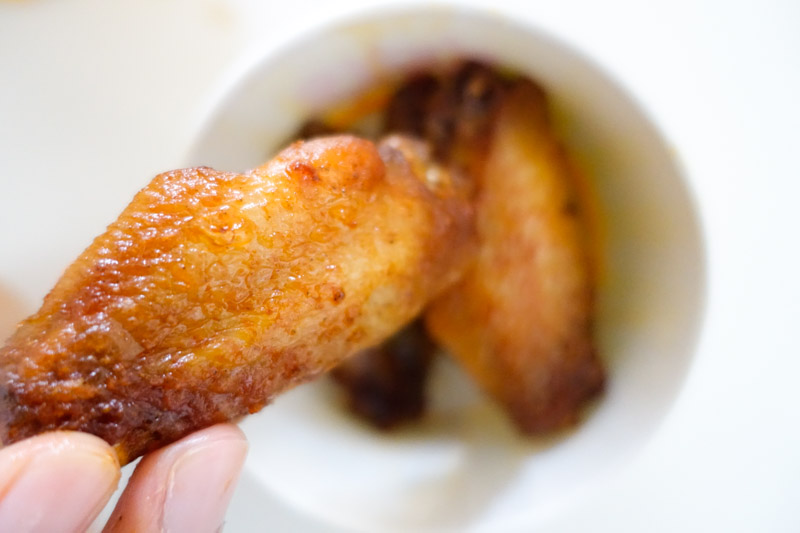 Unconventional is the theme of this establishment and the people behind Shake Shake In A Tub strongly encouraged us to express our inner child-like desires by experimenting with flavour seasonings and to fuse two or more into one. Must-try’s are Truffle with Cheese, Mala with Kimchi and Mala with Curry.

The Regular Sized Buffalo Wings (S$3.30 for four pieces) comes as a set of four winglets. They were standard fast-food buffalo wings that didn’t really stand out, apart from just being average. 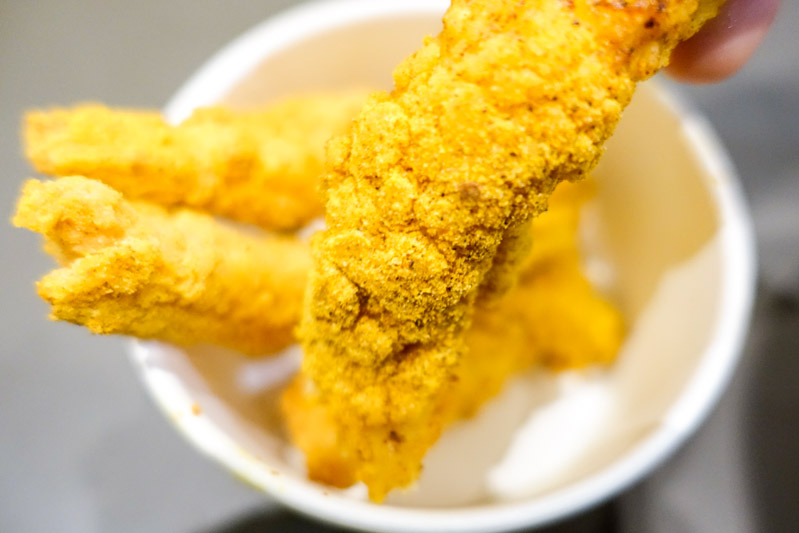 We also chose to have the Huge-Sized Tub Chicken Tenders (S$9.90 for 12 pieces) which received a dusting of any two flavour seasonings. We opted for the Curry and Kimchi-flavoured chicken tenders under the recommendation of the owner.

The chicken tenders were cooked fresh-to-order and arrived at the same time as all our other items — in under five minutes. The crispy batter was an aesthetical golden-brown with visible pepper flakes, suggesting that it had been seasoned well. The soft-serve yoghurt ice cream was enjoyed on its own. For S$2, we got a generous portion of the soft-serve served in a premium waffle cone. The ice cream had a sour-like quality, owing to the nature of its high-quality yoghurt base, with a touch of sweetness that tastefully reminded us of cream cheese.

Shake Shake In A Tub lives up to the standards of a professionally run fast food service joint. Its offerings are definitely innovative without being gimmicky. If there’s one thing for sure, there is a lot to admire about the way they’ve turned a nostalgic feeling into a business.

Shake Shake In A Tub

Shake Shake In A Tub