If you’ve ever had lunch in the food court at CT Hub 2, you may be familiar with 25-year-old Raymond Tan who hustles hard at his hawker stall, Snuggrubs. With a fiery passion for food, he and his team run a western stall selling Japanese-Western fusion food with a local twist. 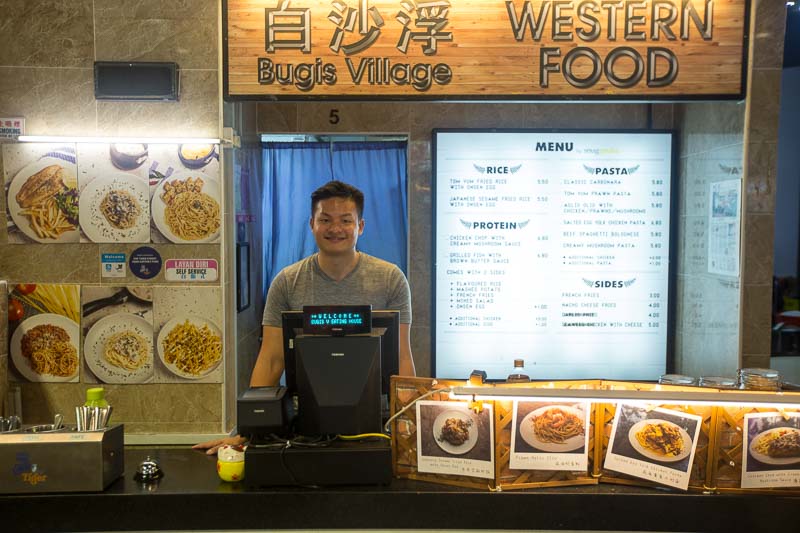 He originally set up Snuggrubs in NUS in 2016, but decided to make it more accessible to the public by relocating it to Bugis Village Eating House in September 2017. In such a bustling food court with people flocking to get quick meals during their lunch breaks, I noticed that the stall was seemingly unpopular, with barely a queue.

After some more observation, I realised that there wasn’t a queue because service was simply too fast for one to build up! Raymond then explained how he incorporates the fast-food approach into his stall, having orders delivered within minutes.

And just as promised, we didn’t have to wait long before a delicious-looking plate of pasta was served. 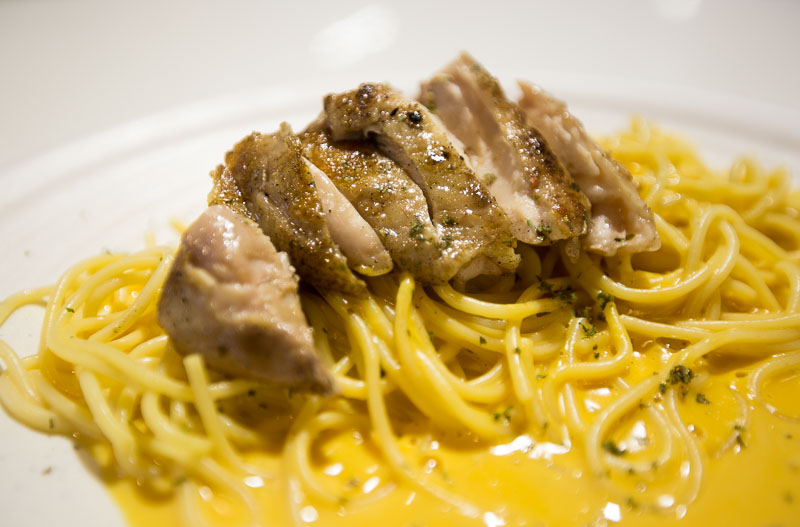 The Salted Egg Yolk Chicken Pasta ($6.80) had such an inviting and fragrant aroma that I found it so difficult to focus while I took pictures and jotted down notes.

The chicken had been cooked sous vide to retain its natural oils and juiciness. Raymond makes sure that the ingredients are prepped in the morning, which expedites the cooking process. The cooked chicken just has to go onto the grill for a minute or two to sear the skin before it’s all ready to be plated. 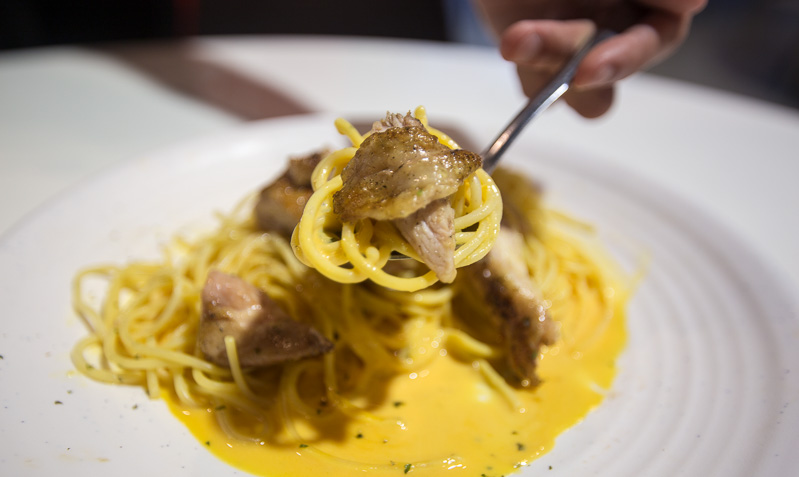 As expected, the meat was moist, tender and juicy. The herbs in the dish also really gave it an extra layer of flavour. The sauce, however, was the real winner.

It was creamy and rich with just the right amount of spice. It could have become a little too overwhelming but thankfully it was reasonably portioned. 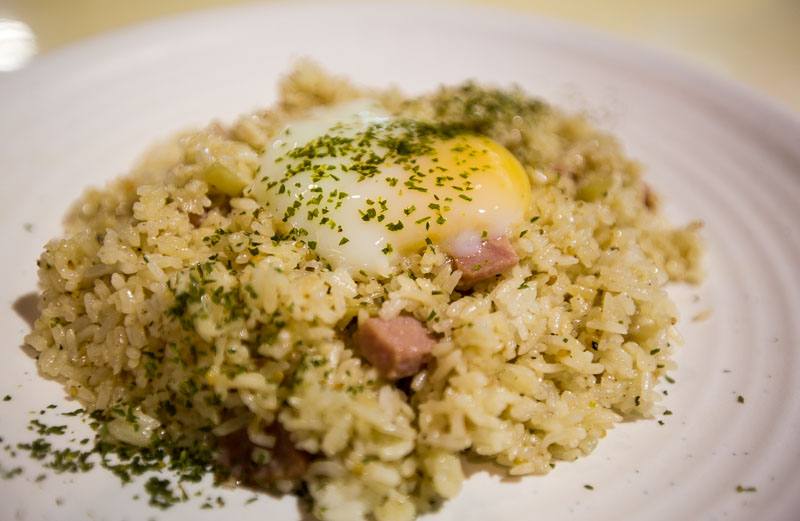 We were then served one of the more unique dishes on the menu, the Japanese Sesame Fried Rice With Onsen Egg ($5.50). Judging by appearance alone, I knew I was going to enjoy this.

The rice was gleaming at me waiting to be eaten, and with the onsen egg wobbling away, there was only one way I could proceed with the dish. 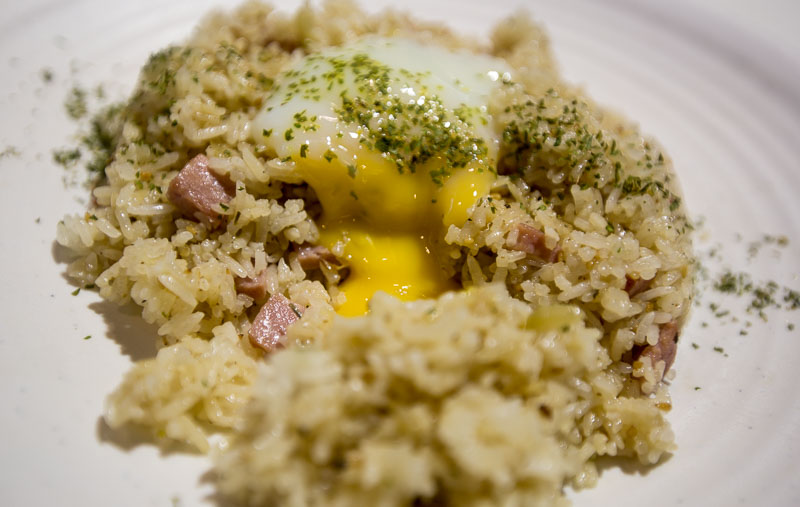 I pierced it, opening the floodgates of eggy goodness. Each bite was a mouthful of flavour, sweet, a little savoury and heavy with a pronounced sesame taste. I also liked how the turkey ham chunks were soft and sweet, pairing well with the fragrant fried rice.

I did, however, find the rice a little dry and hard. Plus with the egg stirred into rice with its overall oiliness, the dish can get a little too filling. Perhaps get this to share as you order something else as well! 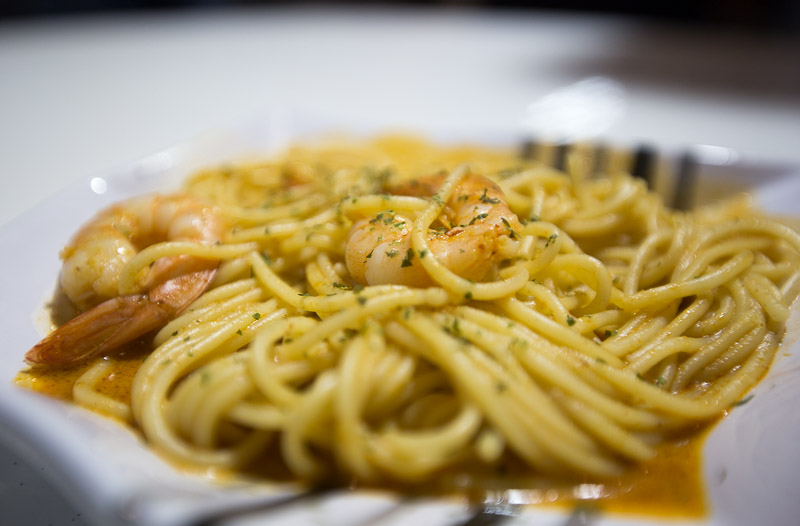 Like a plate of the Tom Yum Prawn Pasta ($5.80). I initially thought that we’d only been given two prawns, but then discovered two more hidden underneath layers of spaghetti.

With prawns the size of nuggets and a sauce spicy enough to tickle my nose with a whiff, I’d say this is a pretty good deal for the price. 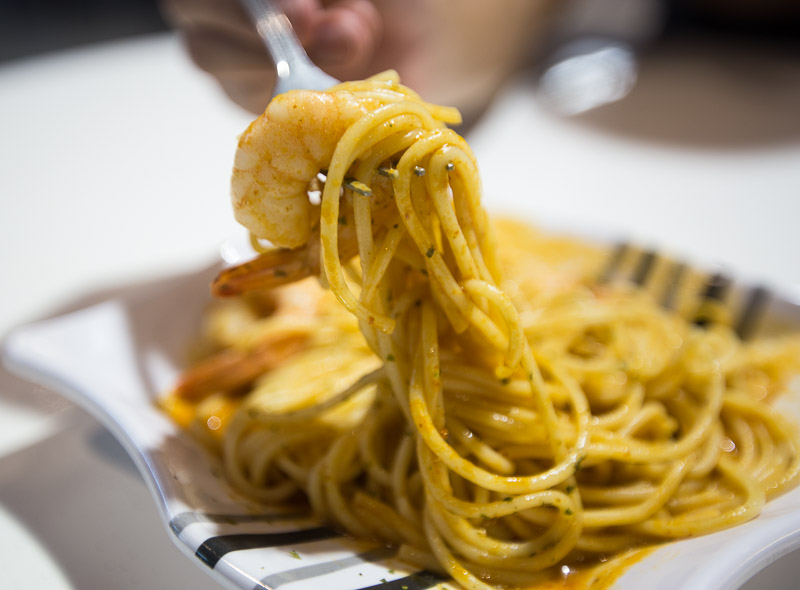 The spice level in this dish was no easy feat, and slurping down each forkful became increasingly tougher as time went by. Yet it was painfully addictive; the tom yum had a mild sourness to it, and I could also taste hints of lemongrass within the spiciness.

The prawns were also very fresh and sweet and I thankfully had enough to go around with each bite. I’d gladly eat this dish again, at least when I finally recover from swollen lips. With our bellies bulging, we had room for just one more dish and tried the Chicken Chop With Creamy Mushroom Sauce ($6.80).

For the sauce to attain a thick consistency, it is slow-cooked for about four to five hours. It was creamy and I could definitely taste the strong flavours of the mushrooms coming through. The chicken was as good as the first dish and really juicy and tender. It paired well with the herby rice, which was a refreshing change to plain old rice.

Unfortunately, just like the Japanese Sesame Fried Rice With Onsen Egg, the rice was a little too dry. But overall, the dish was pretty good, and it’s one of the better chicken chops that I’ve had in a food court.

We were rather satisfied with the food served at Snuggrubs, as it’s quite hard to find a western hawker stall that knows how to make a good chicken chop. This stall honestly deserves more of a lunch crowd, so why not try a plate of Salted Egg Yolk Chicken Pasta this week?

Previous articleAroma Kampung: Relish In Traditional Malay Food With 13 Different Sambals In Joo Chiat Complex
Next articleIndulge In A 4-Hour Italian Wine Tasting At This Wine Fair In Robertson Quay On 10 Mar