One of the best things about my job is finding little gems hidden in the nooks and crannies of Kuala Lumpur. Just when it feels like I’ve eaten almost everything this big city has to offer, something else will blow my taste buds away. One of these little gems is the Swiss Roll and Kaya Kok stall located along Jalan Yap Ah Loy run by 81-year-old Madam Wong. 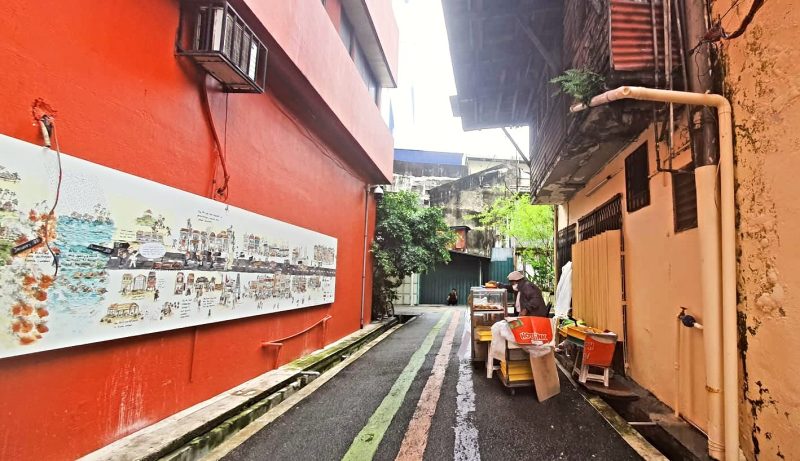 It was rather difficult locating her stall as it was in a high-traffic area. After several rounds of driving in circles and peeking in alleyways, I found her little stall in a tiny alley opposite the oldest Maybank branch in Malaysia. I instantly felt a sad pang in my heart seeing Madam Wong sitting all by herself on a rainy day.

Madam Wong is known for her homemade Kaya Swiss Rolls, Kaya Puffs and Egg Tarts for more than 40 years. With the assistance of her children, she wakes up as early as 1am to make her baked goods from scratch and her pastries are known amongst locals and tourists alike. I greeted her friendly face and placed my order for an entire loaf of Kaya Swiss Roll and some Kaya Puffs.

What I tried at Swiss Roll and Kaya Kok

The 40-minute drive home was a rather difficult one with the Kaya Swiss Roll and Kaya Puffs tucked neatly in the passenger seat and next to it, my rumbling stomach. Upon reaching my doorstep, I unpeeled the Kaya Swiss Roll (RM21) from its protective layers of plastic and mahjong paper.

Appearance-wise, I was impressed with the size of the Swiss roll— it was quite huge and already pre-cut into 12 slices for the convenience of her customers. How thoughtful! You would be interested to know that this swiss roll was made based on a recipe concocted by her husband (unfortunately he passed away in 2011) when they first started the family business in 1974. I gently peeled apart a slice of the swiss roll and took a bite. The texture was absolutely beautiful— soft, fluffy and buttery. Swirled inside is her homemade kaya. The eggier taste was a bit more overpowering than the kaya. I took a second bite and then the taste of the kaya was more pronounced.

The kaya filling was truly the highlight— it did not have that artificial sweet taste and had a very balanced, light flavour. The only regret I had was not making a cup of coffee to enjoy this perfect afternoon treat with. Moving on to the Kaya Kok (RM2.20), I have heard rave reviews from friends about this kaya-filled golden treat. Many have titled it ‘the best kaya puff in town’ so I was really curious to try it. I sliced it into half to have a clearer look of the kaya filling and boy, was I pleased. There was an extremely generous slab of kaya spread sandwiched in the middle of the pastry. A bite of the kaya puff and I was hooked. The pastry is so crisp, buttery and flaky. Definite proof  that Madam Wong is unsparing with butter when making her puffs.

Next, the sweet and creamy kaya filling. The moment I had a taste of it paired with the pastry, I knew Madam Wong’s kaya puff would also have the perfect ratio of pastry to kaya.The pastry never became clumpy in the mouth, nor was the jam cloyingly sweet. In seconds, the entire pastry was gone. I have to say, this is one of the tastiest pastries I’ve had in a long time, and I was bummed that I didn’t buy more. If you’re ever around Masjid Jamek, swing by Madam Wong’s stall and get her Kaya Swiss Roll and Kaya Puff (more than two pieces, please). It’s rather rare to find a good kaya swiss roll these days as many of the old-timers have passed away and the tradition of making this nostalgic sweet treat is often not carried on by the younger generation.

I was glad to learn that she has loyal customers who flood her stall on weekends. So if you’re planning on visiting, drop by early. I know I’ll be returning for more of those delicious kaya puffs, that’s for sure. And perhaps I’ll see you there!