Disagreeable Dishes: We Tried The Worst-Rated Chicken Rice At The Big Bird In Balestier

It’s safe to say our beloved national dish is chicken rice—a dish that has sparked many contentious debates about whose is the best in all our land. But the one thing that many have not spoken about is the other end of the spectrum of the argument: whose is the worst? 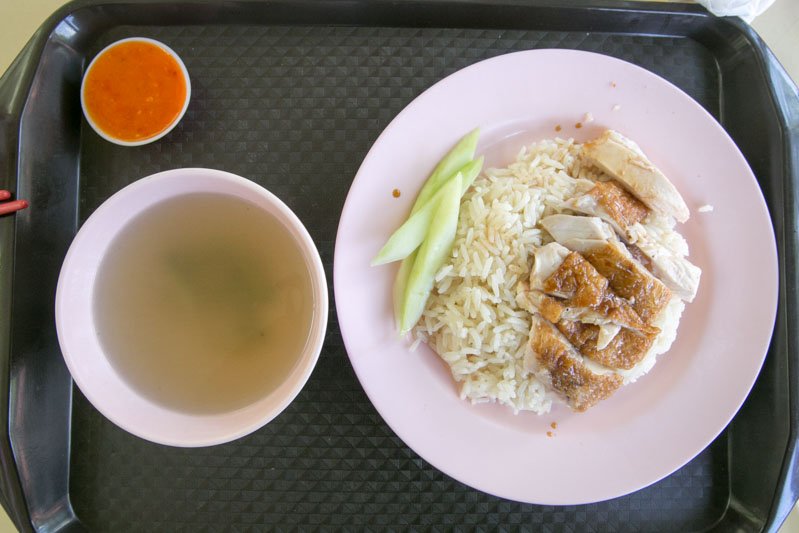 I knew that if I wanted to put a single chicken rice speciality place under a magnifying glass, I would first have to single out the least favourite one by means of user-submitted reviews online. And so I took to Google and perused the trusty internet to give me some much-needed feedback.

Seeking Out The Weakest Link Very quickly, the name The Big Bird kept popping up in my searches, and the reviews were indeed, less than stellar. As you can read for yourselves, the comments posted across various food review sites weren’t shy about pointing out how disappointed they were—from price to service, to more importantly, food quality.

All in all, my own experience was shaped around four main review platforms (for their mass appeal and likelihood that patrons will leave their feedback): Hungrygowhere, Google reviews, Facebook, and Tripadvisor.

In summary, these are the results I’ve collated:

What Am I Looking For?

Any frequent chicken rice consumer will have their own criteria about what makes the best chicken rice for them. Some may gravitate towards the rice, while others are obsessed about the chilli. On the other hand, there are purists out there whose only concern is the actual chicken itself. 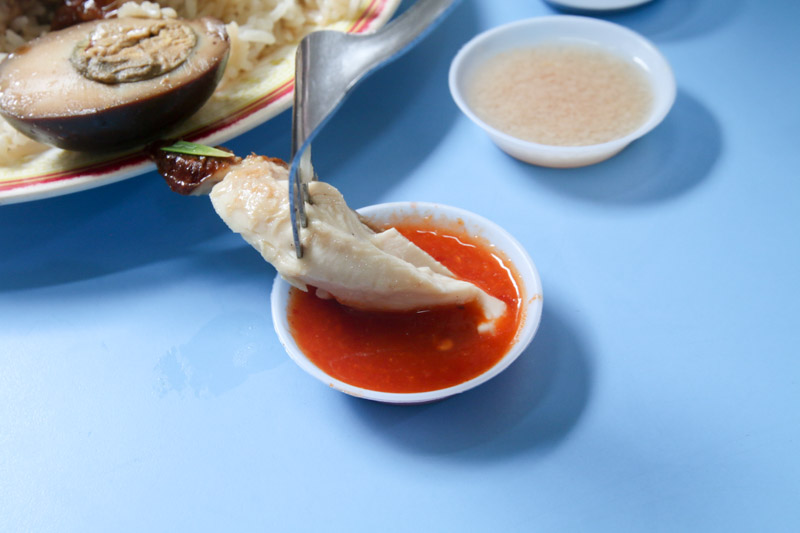 Personally, I’m all about the rice and the chilli, so those two aspects will definitely receive some interrogative treatment from me. The former will have to be fragrant and savoury, tasting of having been soaked in chicken broth, with a hint of ginger. It also has to have ample greasiness, and the rice grains individual and separated (read: not mushy).

The chilli needs to be spicy, but not overwhelming so that it blankets all the rich flavours of the rice. The chicken should ideally be succulent, with an even layer of gelatinous fat tucked beneath the skin (regardless whether it’s roasted or steamed). 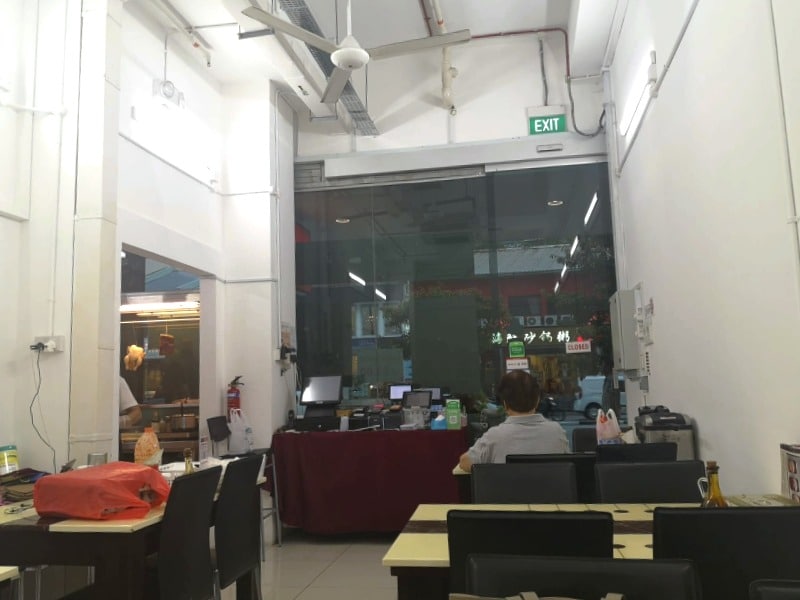 When I arrived on a weekday evening, around 7pm, there wasn’t a single diner to be seen. The place was bare and stripped of any warmth, save for plenty of large printouts of newspaper articles raving about their chicken rice, plastered on their glass wall.

It was apparent that little to no thought was given to ambience, and even the payment counter was a makeshift table draped in dark red cloth and piled with an assortment of payment devices, and a POS system. 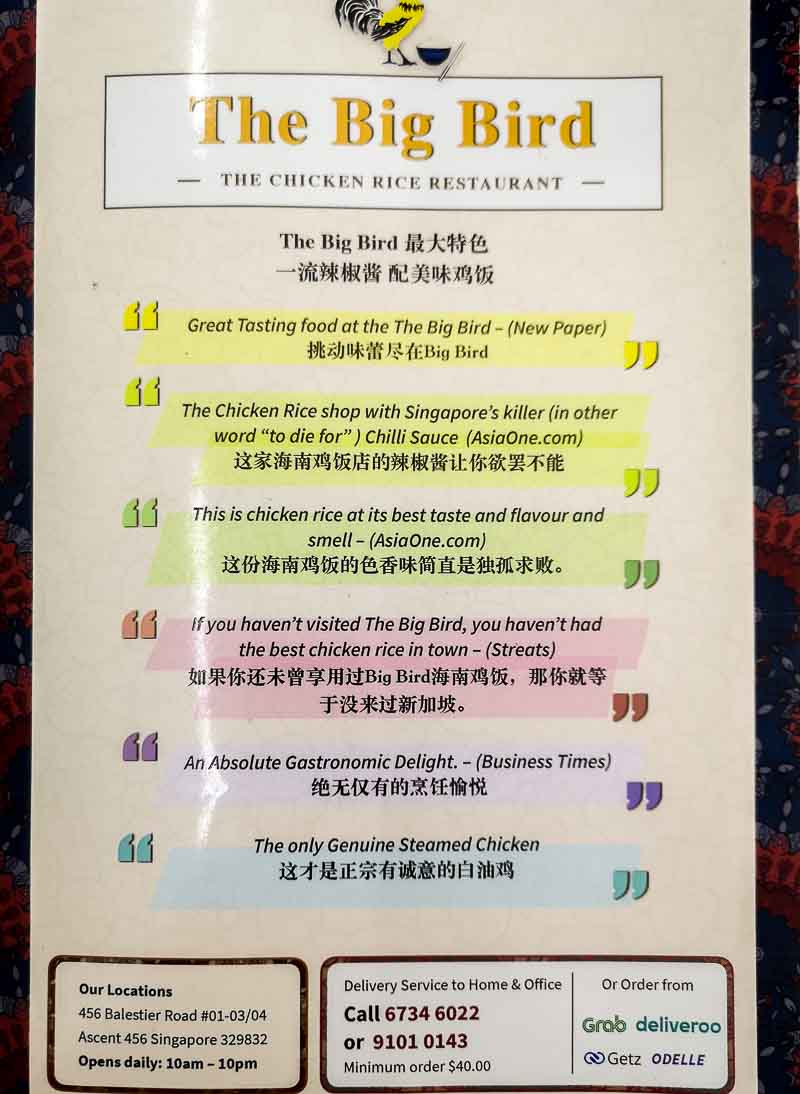 It always comes off a little too try-hard for me when a place has to hard-sell themselves to passersby with loud advertising. Point-in-case: The Big Bird’s menu cover has quotes emblazoned up and down, enthusiastically giving positive reviews of their famed chicken rice.

It was then that my dining partner pointed out a pattern that I had so carelessly missed—all the reviews were quoted from one of the largest news publishing companies in Singapore. That instantly got me suspicious, but I figured that the proof is still in the pudding, and I wouldn’t know the product, truly, until I tried it for myself. 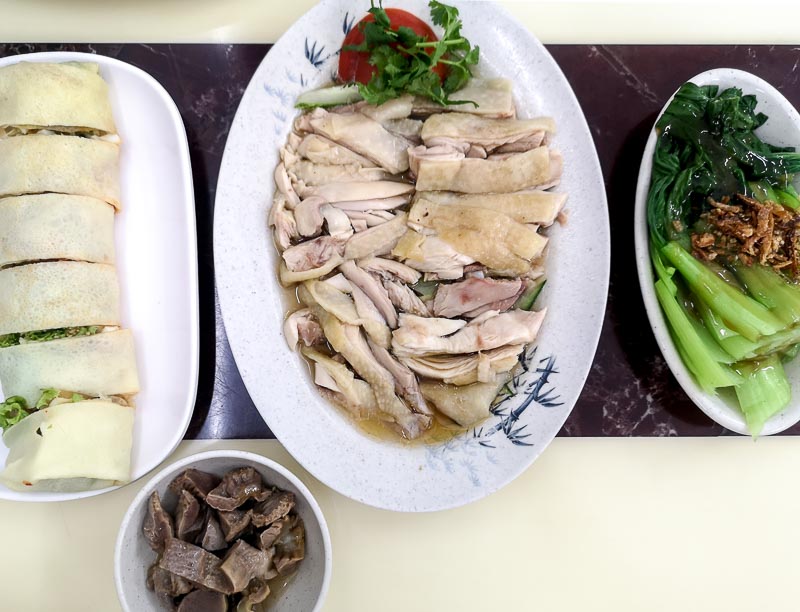 We decided to order a portion of Chicken Rice (Double) (S$14.60), Siao Pai Chye (S$8.50), Gizzard (S$1.40), and Nyonya Popiah (S$5.80). The chicken only comes either fried or steamed and since we wanted to stay true to how chicken rice is traditionally consumed, we chose steamed chicken (as opposed to eating it with fried chicken, which honestly confused us).

From the get-go, we were surprised that none of chicken rice sets here come with a soup, which, personally, is an elementary component of this well-loved dish. 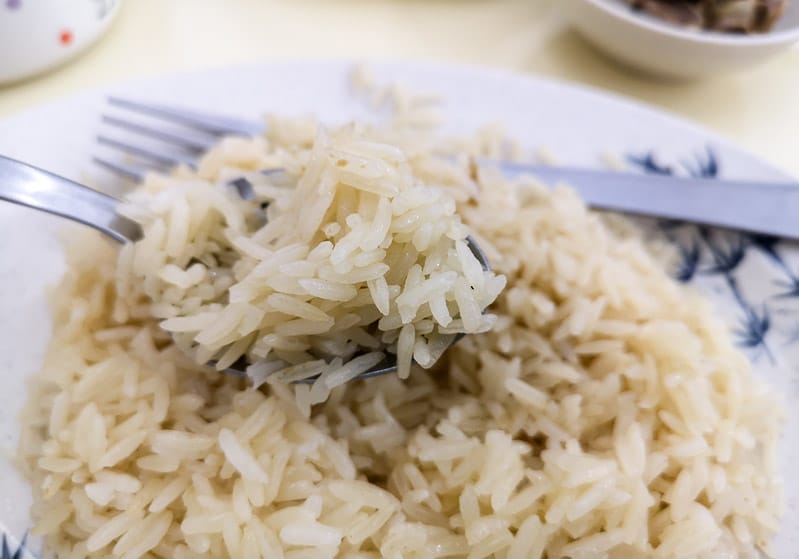 At first glance, the rice looked inviting, and the familiar aroma was certainly mouth-watering. However, my first spoonful was a disappointing, insipid bite. The textures were spot on, but I simply couldn’t detect any notes of ginger or rich chicken broth. I knew then, that I had to add plenty of their homemade chilli to enliven this paltry plate. 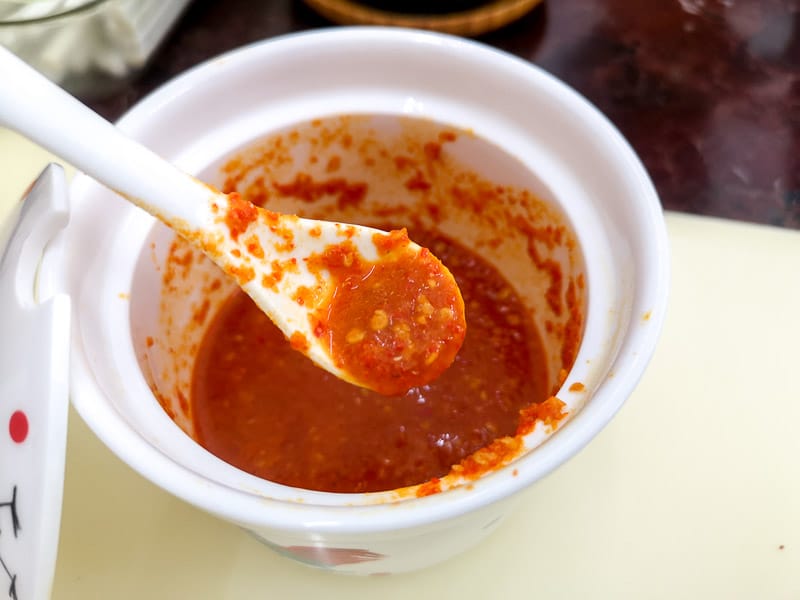 I was careful not to douse too-friendly an amount of the homemade chilli onto my rice, out of fear that it might prove to be a fiery mistake. My gut was right; the chilli was overpowering, with an instant slam of chilli padi hitting my tongue and the back of my throat almost instantly.

This, in turn, affected the aroma of the chilli as well, making it a one-dimensional condiment, and too powerful to complement the chicken rice. Instead, it obliterated all other flavours, and thus, I continued on with my meal sans chilli sauce—which I count as a crime when enjoying chicken rice. One of the pros I enjoyed about their serving of steamed chicken was the generous portion, as well as the minimal serving of meat-on-bone. That certainly made the meal easier to eat (and it was aptly succulent and tender), and there wasn’t much disagreement about the meat-to-fat-ratio either. 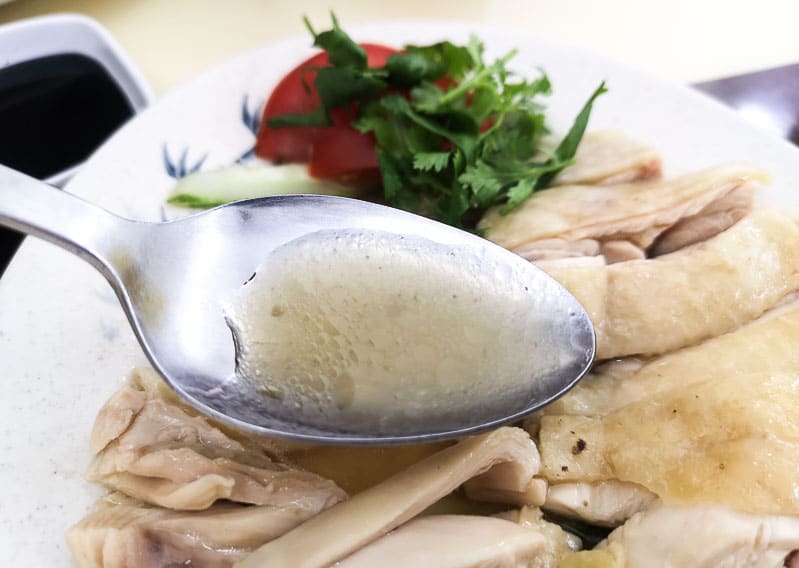 While the meat was fine and dandy, the gravy that it was served in was unacceptably salty. I assume that would be the deciding factor in what makes the chicken taste good, but in this case, the steamed chicken didn’t need this intrusion of saltiness.

I drained my spoon of most of the glistening, light brown liquid as I scooped up pieces of boiled chicken, although I did sprinkle a little over the chicken rice—given that it was already lacking in taste. I honestly am unsure how to start describing the Siao Pai Chye (also known as bok choy), given that it’s simply blanched, served with a drizzle of fish sauce and a scattering of fried onions. I must commend them on still being crunchy, but that was where the satisfaction ended. 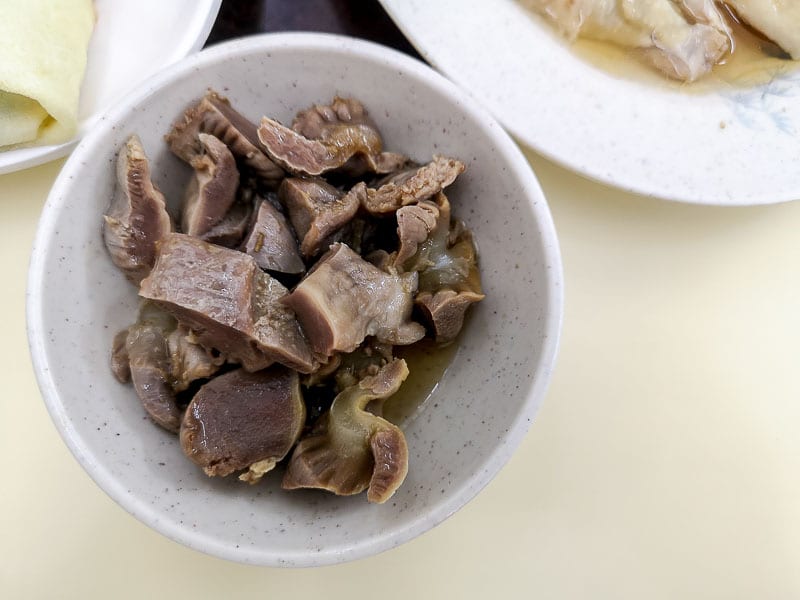 Their serving of Gizzard was pretty standard, and I enjoyed how chewy and gamey these tiny morsels were. To be honest, this straightforward serving of innards was probably the best part of the evening’s meal. 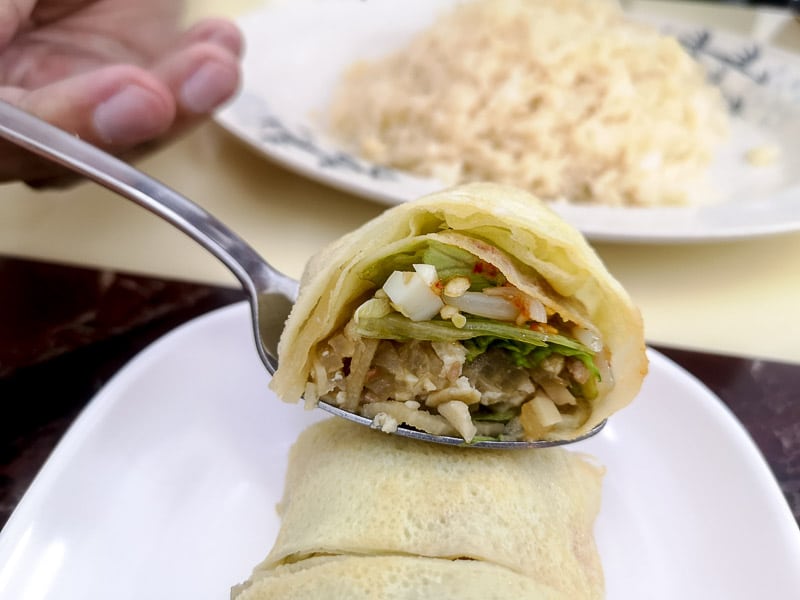 It’s hard, in my opinion, to mess up popiah, which is why I was offended that their Nyonya Popiah turned out soggy and simple reeking of just chilli. When I consume popiah, I look for textural differences; the crunchy, the softness, and the chewiness.

This Nyonya Popiah was laden with too much chilli—the kind of sauce that had bird’s eye chilli and erased any possibility of me tasting the other ingredients. From mere sight, I could tell that there were ample amounts of radish, chopped pork, and lettuce, among other vegetables, but I truly struggled to taste any of them through the scourging chilli sauce.

As a result, I really struggled to finish the popiah, and only did so because I had come hungry for dinner.

Based on reviews, I refused to believe The Big Bird was as awful as others had deemed them to be, especially given their many years in the business. I wanted to go in with no biases, and I so wanted my dinner experience to prove the haters wrong.

Alas, my time at The Big Bird resonated closely to the negative feedback that it’d received over the years, and unfortunately, it truly isn’t a place I would recommend for a hearty place of chicken rice. The upside of the restaurant is its serving portions; it was sizeable and it made for a filling meal.

What are some places you’ve heard that serve less-than-acceptable versions of your favourite meal that you’d like me to check out? Sound off in the comments!