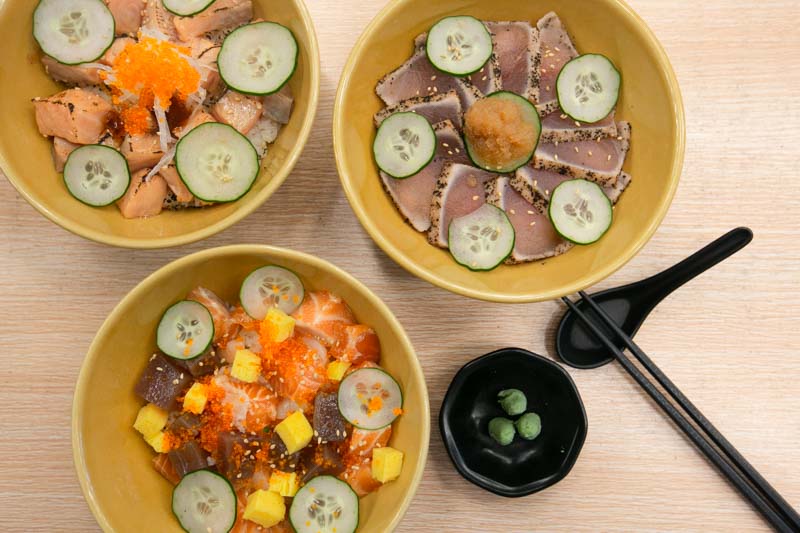 Japanese food is a luxury. Of course, you could get sushi or sashimi right off the shelves at your local supermarket, and it’s instant gratification at a low price no doubt, but we can probably all agree that sometimes supermarket sushi just won’t make the cut.

On the other hand, while satisfaction is guaranteed at restaurants serving up an authentic Japanese fare, it often comes with a heavy price tag. 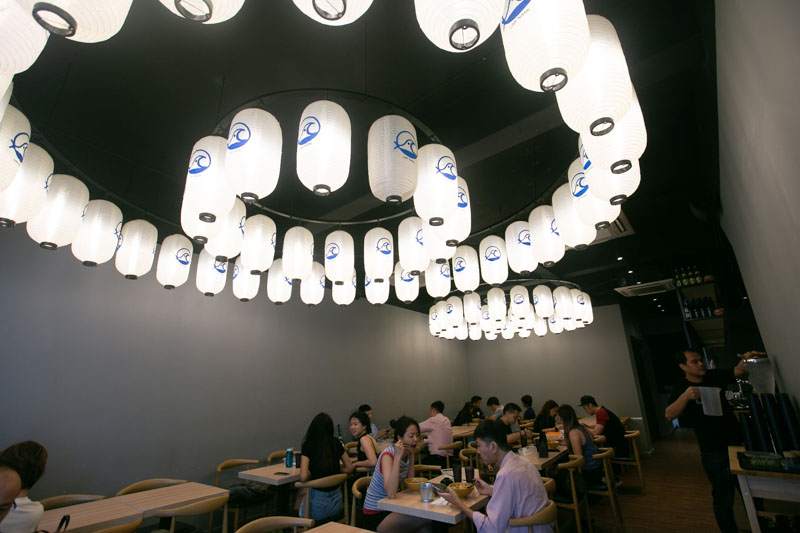 While some of us are more than willing to let the almost exorbitant prices slide, those who enjoy cheap thrills will be delighted to find Umi Nami in Holland Village offering Japanese dons from as low as S$10. We had to get their Bara Chirashi Don (S$10), being the cheapest don on the menu and definitely one of the most affordable ones I’ve had. Truth be told, we were expecting only a measly amount of salmon sashimi cubes scattered over vinegared rice.

What came was a generous serving of both tuna and salmon sashimi cubes, tamago and some shrimps sitting atop traditional sushi rice. 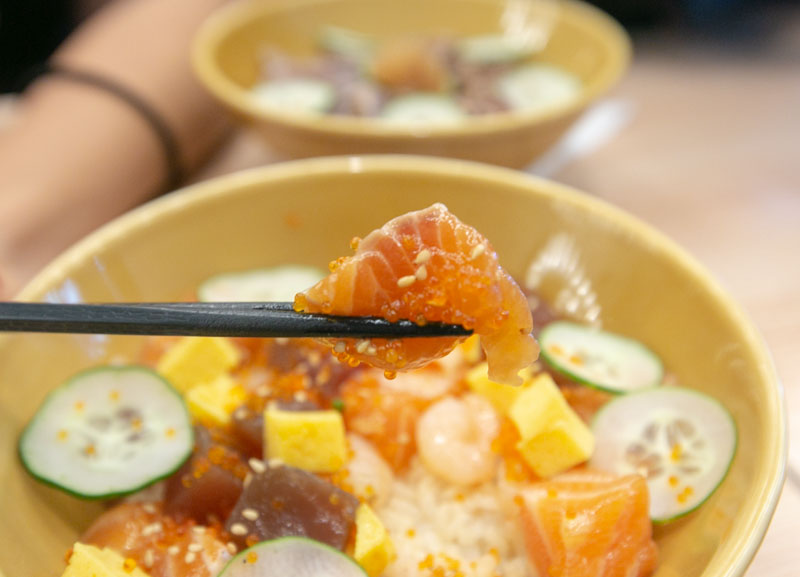 While chirashi came about from wanting to minimise wastage of the unwanted parts of the fish left when the premium parts have been used for sashimi platters or nigiri‘s, contemporary versions like Umi Nami’s are really just regular diced sashimi scattered on rice; multiple deconstructed sushi‘s in a bowl, if you like. 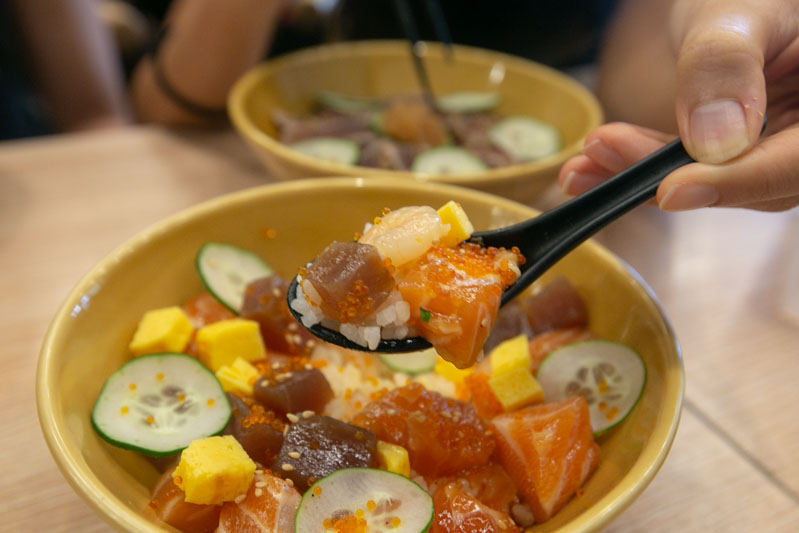 Nothing groundbreaking about this bowl, I must admit, but it definitely surpassed our expectations with well marinated fresh sashimi chunks for only S$10.

They may have increased their serving of sashimi from when they first opened; I remember seeing a more sparsely scattered sashimi bowl in some pictures. 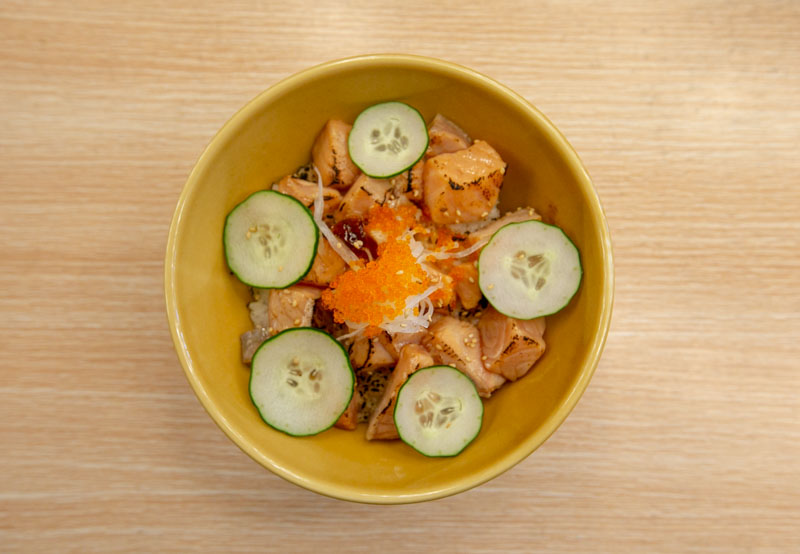 Our favourite of the three bowls was the Aburi Salmon Don (S$12).

There’s just something about blowtorching your food; the irresistible draw to the fragrant char is quite unexplainable. 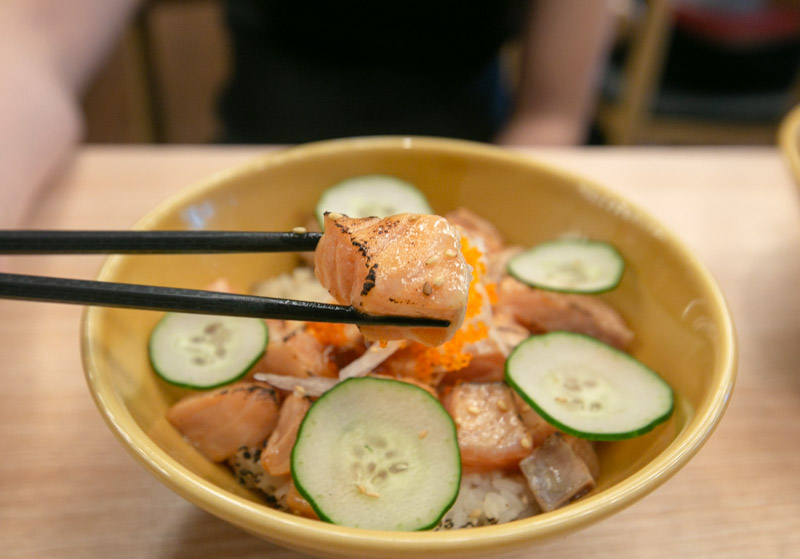 Their Aburi Salmon Don features the same vinegared rice covered with sizeable chunks of aburi salmon. The coral cubes of salmon are lightly charred, and while most would pair aburi salmon with a creamy mentaiko sauce, Umi Nami’s salmon melt-in-mouth quality suffices. 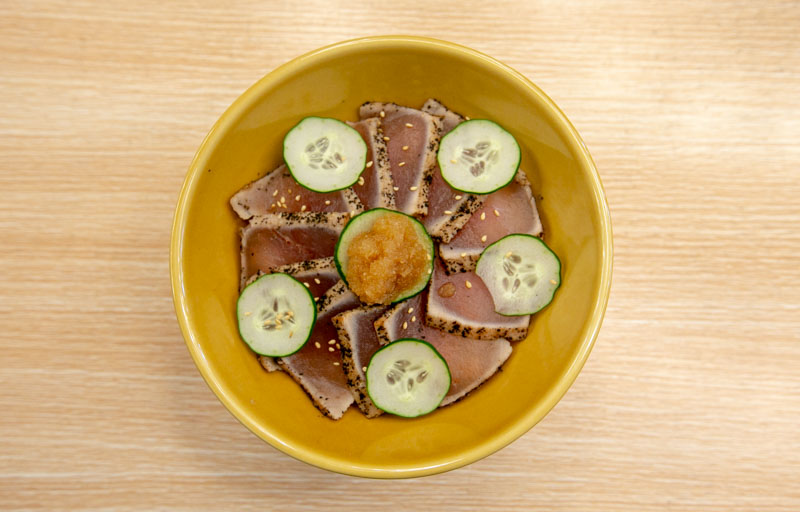 Being rather satisfied with the two bowls we tasted, we went for the Maguro Tataki Don (S$15) with high expectations. Maguro is bluefin tuna, while tataki is a common Japanese cooking method where meat or fish is served either raw or lightly seared. 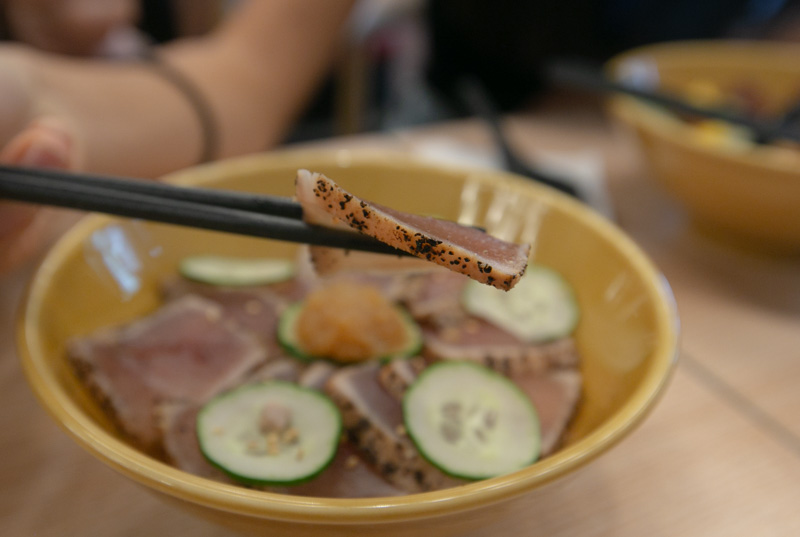 In this case, it was a lightly seared tuna with black pepper marinade. The appearance of the thinly sliced dark pink tuna looked promising, but unfortunately fell short when it came to taste.

The dollop in the centre of the bowl is their house-made ponzu sauce, a citrus-based sauce supposedly with a tart-tangy flavour quite similar to a vinaigrette. 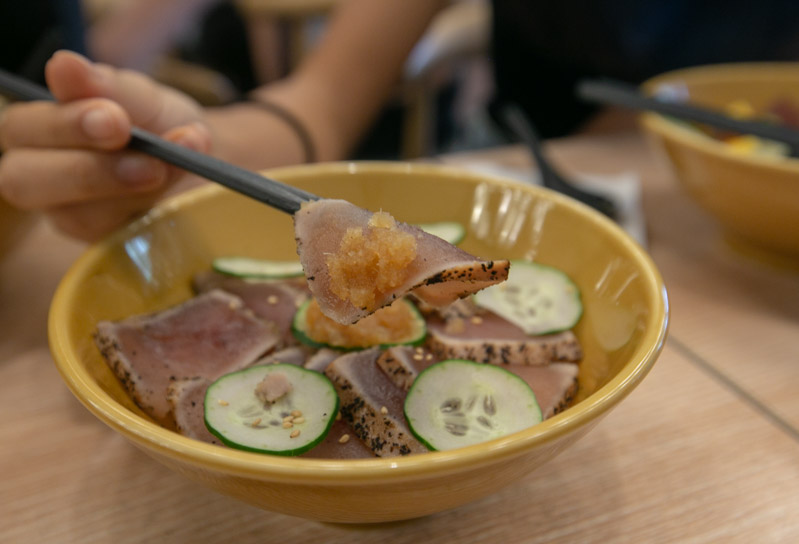 This sauce is a common pairing with maguro, known to have a repulsive briny taste when not cured or seasoned properly. The tangy citrus sauce is not meant solely to mask any of the unpleasant flavours of the fish (if any), but more importantly meant to elevate the delicate slices.

Having had the combination of both tuna and ponzu before, it was a poor attempt on Umi Nami’s part with their version of it.

The supposedly striking flavour of citrus was sorely lacking in the ponzu sauce and the black pepper lining the tuna was too overwhelming, coming through as the only flavour in the dish.

Umi Nami is undoubtedly a go-to for those seeking cheap thrills, and definitely not for those with a palate for the more exquisite. The quality they offer appears to be a hit-and-miss, as experienced first hand with one bowl being quite a disappointment.

Nevertheless, keeping in mind the affordable price point of the place, I’ll say that for S$10, you really do get bang for your buck.