You’ve probably seen some of these food combinations that have sent netizens over the edge.

Since we have rather adventurous tastebuds, I thought it would be a good idea to try out 15 weird food combinations that people have tried making at home. Most of the ingredients can be found at your nearest supermarket or dollar store so if you’re bold enough to try them, feel free to make these at home.

One of the combinations that caused quite a stir was the durian, rice and Milo dish. My first question when I saw it was: Why? The durian texture DID NOT go well with the rice at all. Maybe if it was fried durian it might work, but the creamy consistency of the durian flesh and the rice was simply weird.

The taste of durian also overpowered everything and I could barely taste the Milo. Who knows, maybe die-hard fans of durian might like this combination.

One of the biggest questions has always been whether or not fries should be dipped in ice cream.

I’ve always thought it was a normal thing to do, but it turns out there’s a whole other group that is strongly against this combination. They even think that it’s weird as heck. What?! I’ve been doing this my whole life! The ice-cold sweetness with the crispy salty fries is basically two of my favourite things in one bite! How can anyone not like this?

So we chanced upon a video of a lady making a tuna sandwich. Sounds fine, right? Wrong! The ingredient that gave this tuna sandwich the golden ticket to be part of this list is fruit punch. (By the way, this lady swears by it.) 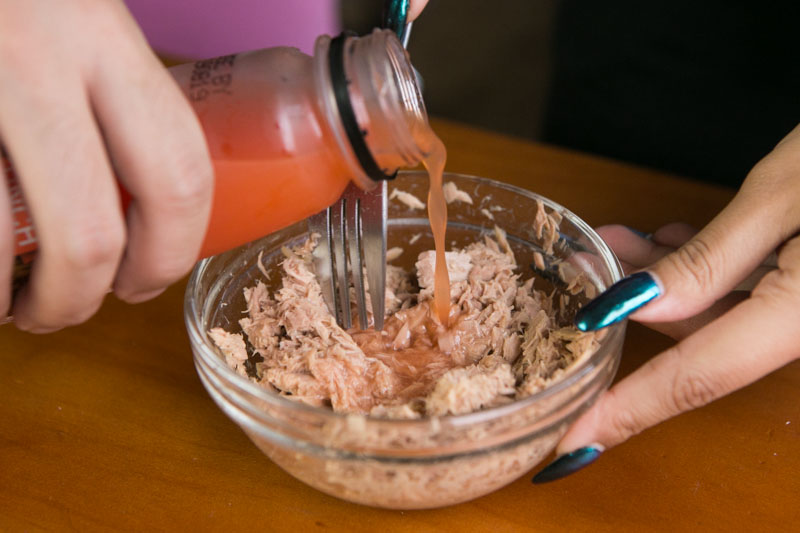 We followed her video and made our regular tuna mayo. Then, we were supposed to pour in some fruit punch and mix everything up.

As if that’s not bad enough, we needed to spread our Tuna-Mayo-Fruit Punch mix on the bread then dip the entire thing in a cup of fruit punch. Yep, I could hear my stomach crying for help. What’s bizarre about this is that it’s revolting at first, then it’s fine, then it’s gross again because of the icky aftertaste. If you’re adventurous enough to try this, we recommend preparing a big glass of water beforehand. 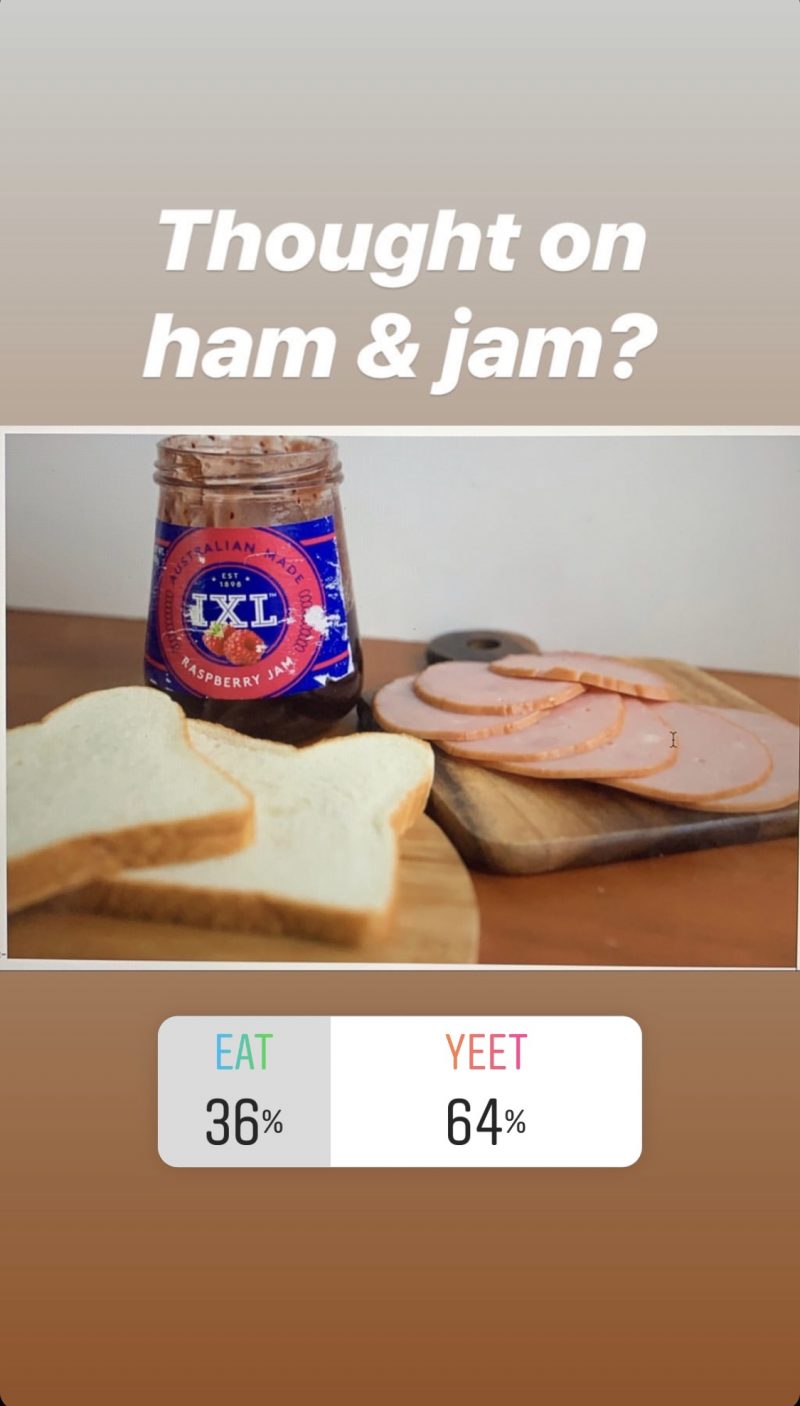 When one of my friends mentioned the combination of ham and jam to me, I was mildly disgusted. I had to find out if people agreed or disagreed with me so I decided to create a poll on Instagram. I was shocked that there were actually people who would eat this combo. 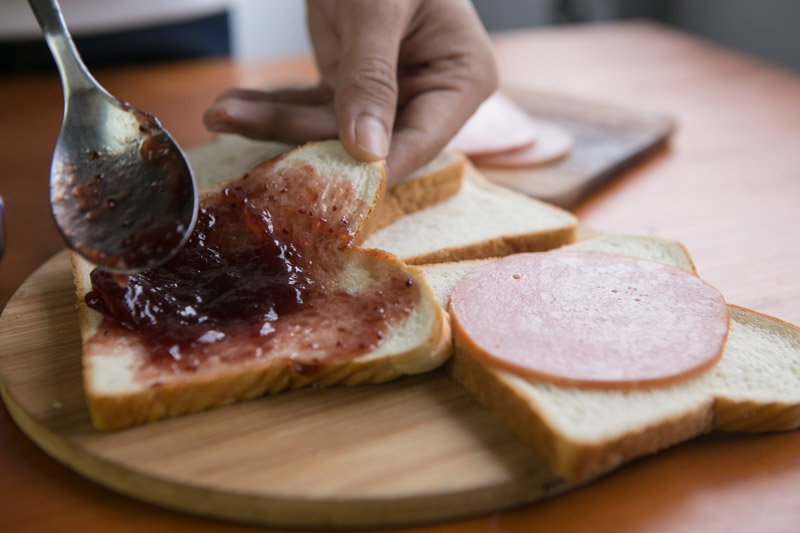 Someone mentioned that it’s like eating Christmas ham or turkey with cranberry sauce or jam. Hmm, it’s a lot more palatable if you think about it in that way.

We realized that if we spread the jam evenly, the saltiness from the ham will balance out everything. I would actually eat this again but only if there’s nothing else to eat.

I’ve seen this all over the Internet and I can’t believe that there are people who actually like this.

You know what they say, one man’s trash is another man’s treasure. First of all, the Cheetos-infused milk was way too salty to be consumed. And the Cheetos pieces were soaked in milk and lost the crunch, leaving the Cheetos soggy and gross.

One of my friends tried it though, and he finished the entire bowl – I guess he’s the 1% of the population that liked this combination.

With all the bubble tea craze going strong, it’s no surprise that people are trying to incorporate it into everything. Someone even tried making rice with bubble tea. It sparked quite a controversy when it went viral online. Has the boba craze gone too far? Surprisingly, most of my friends liked it or at least they thought this tasted fine.

However, it didn’t sit well with me. Maybe it’s because I’m a rice-lover, so I prefer to leave my rice alone to get the best fragrance from it. Though I have to agree with my friends that the texture might be better if I used a stickier type of rice like glutinous rice.

Why would anyone create this durian and curry Maggi combo is beyond me. I scraped off the flesh of the durian and added it to a bowl of curry Maggi.

I’m not sure if that was a right move but either way, it’s made the soup incredibly thick and creamy. 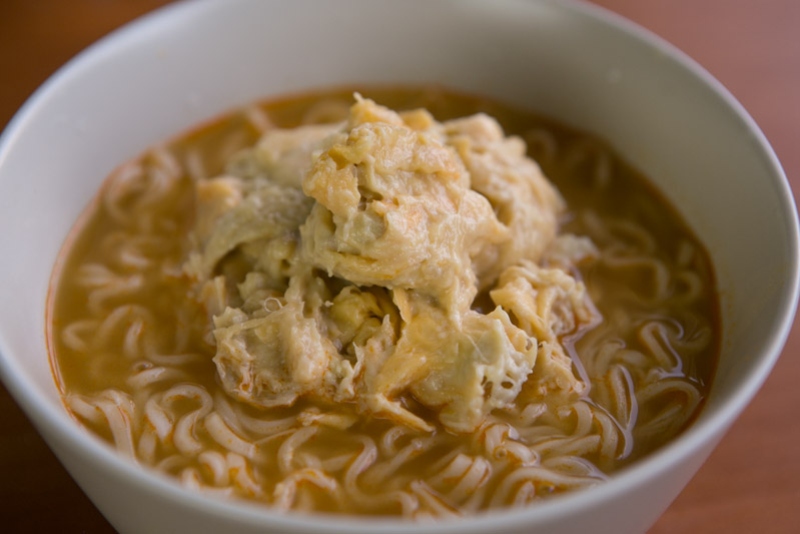 I swear I felt a little bit of bile coming back up my throat when I tried to take a swig of it. I can’t even begin to describe this except that it’s absolutely rancid.

The peanut butter and pickles sandwich might be a normal combination in The States but it’s rarely heard of in Asian countries. I decided to give it a shot even though I don’t normally eat pickles. 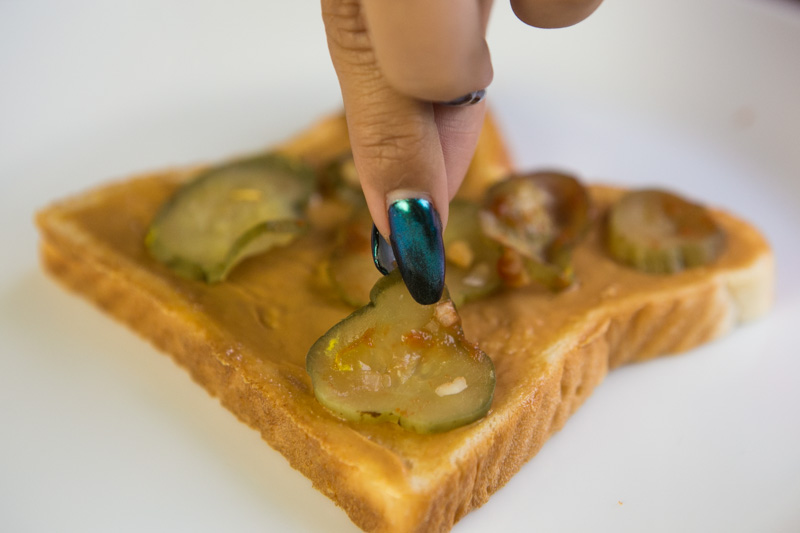 So in order to be fair, I asked my friends to throw in their opinions about this combination too. The creamy, vinegary, sweet and sour flavours went surprisingly well together.

Though I’m not a big fan of pickles, I would probably eat this again if I had nothing else in my pantry. To be honest, it was honestly quite subtle. After it was dipped in orange juice, the biscuit tasted like one of those old school lemon biscuits. It didn’t affect the taste of the cream that much which was good.

A weird alternative to milk but I’ll definitely try this again.

What is with people replacing milk with orange juice? Even if I ran out of milk at home, I would’ve never thought of adding orange juice to my cereal. But since I’m writing an article about weird food combinations, it seemed like a good item to add to the list. Unlike the peanut butter and pickles sandwich, somehow this sweet and sour combination didn’t go well together at all. Although it’s not completely inedible, I’m too used to cereal with milk. I’m sorry but I just can’t agree with the people who eat their cereal with orange juice.

Ketchup and cheese don’t sound too bad but when peanut butter is added into the equation, I was a little sceptical about how it would turn out. 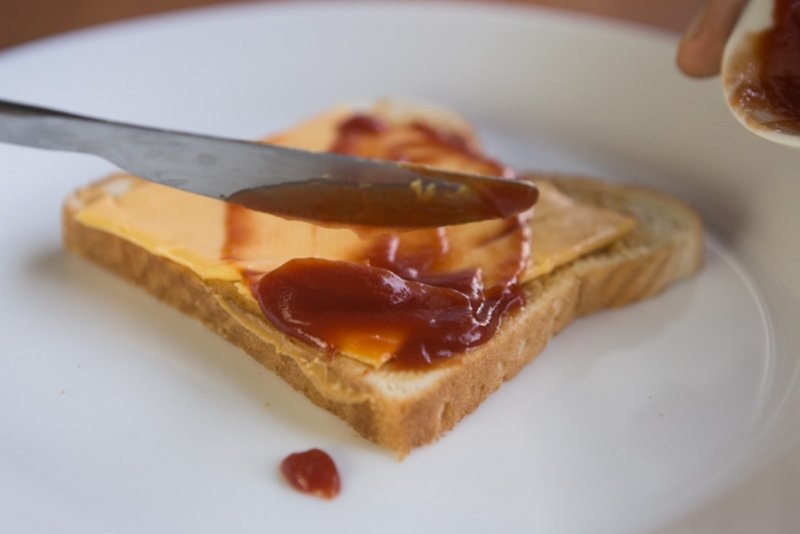 Honestly, it wasn’t that bad as a whole. You can taste the different layers – the savoury cheese, the tangy ketchup, and the sweet and salty peanut butter.

I think the ketchup was so strong that it made the whole sandwich taste like a cheeseburger except with peanut butter.

Like I mentioned above, people are adding pearls to everything and anything. Someone thought it would be a great idea to add boba pearls to an omelette. 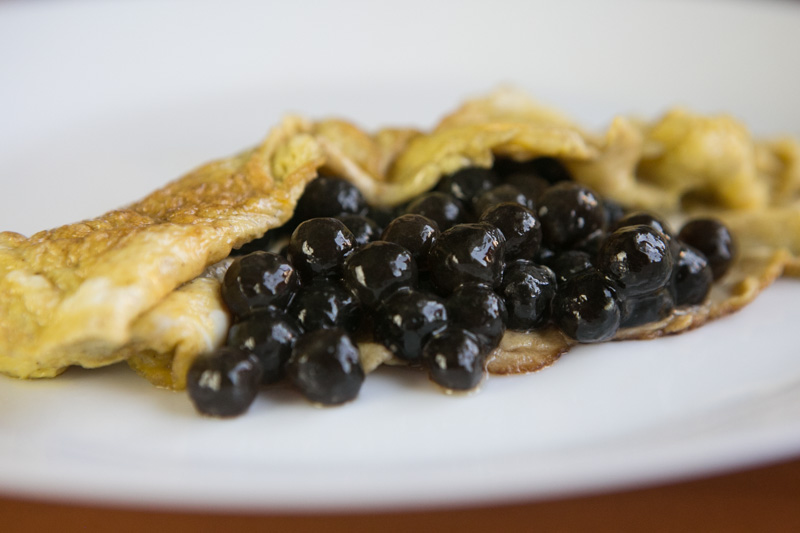 Taste-wise there’s not much to complain about, however, I can’t say the same about the texture.

The pearls and omelette were so segregated and don’t blend well together that it just felt like we were eating both food items separately on their own.

Another everyday item that people have added boba pearls to is Mee Goreng. Ugh, so gross. Sure, pearls are good but do people honestly have to add it to EVERYTHING? Nevertheless, we tried making some Mee Goreng with boba pearls. Much like the Boba Omelette, the texture of the pearls didn’t pair well with the noodles. Besides, the umami goodness from the noodles was just too good for the pearls.

This combination of Milo powder and curry Maggi is a form of culinary disgrace. Sometimes it’s okay to put two of your favourite things together but sometimes it’s not. And this is one of those instances when it’s not. 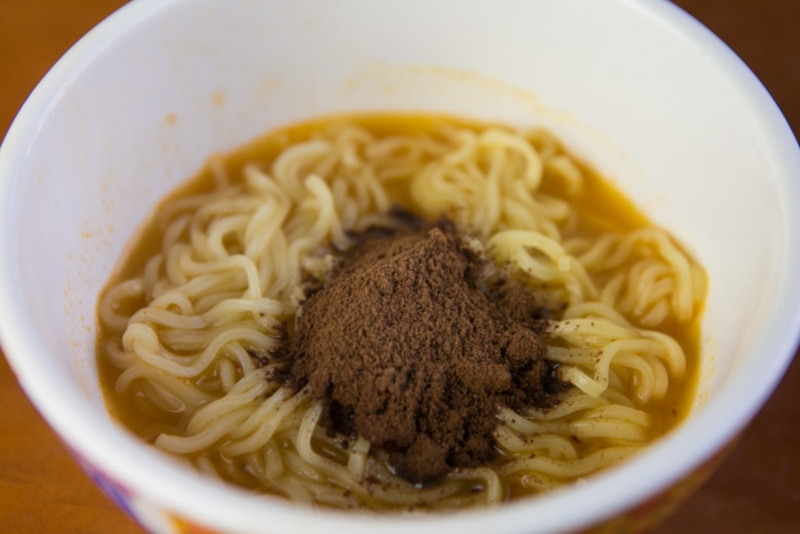 The noodles alone are fine but the whole point of eating curry Maggi is that you want to taste the curry flavour. Add the Milo powder in and all you’re going to get is a thick Milo broth that’s mildly spicy. 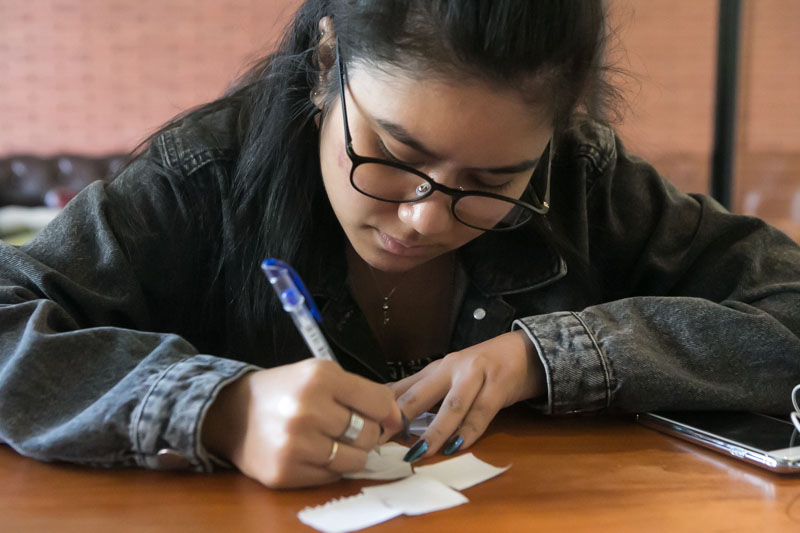 How do people come up with this stuff anyway? So for the last item on my list, I decided to switch things up a little. Instead of searching online for weird food combos that people made, we tried creating one by drawing lots. I asked my friend to write different ingredients on each piece of paper and to fold it up so I wouldn’t know what’s written on it. 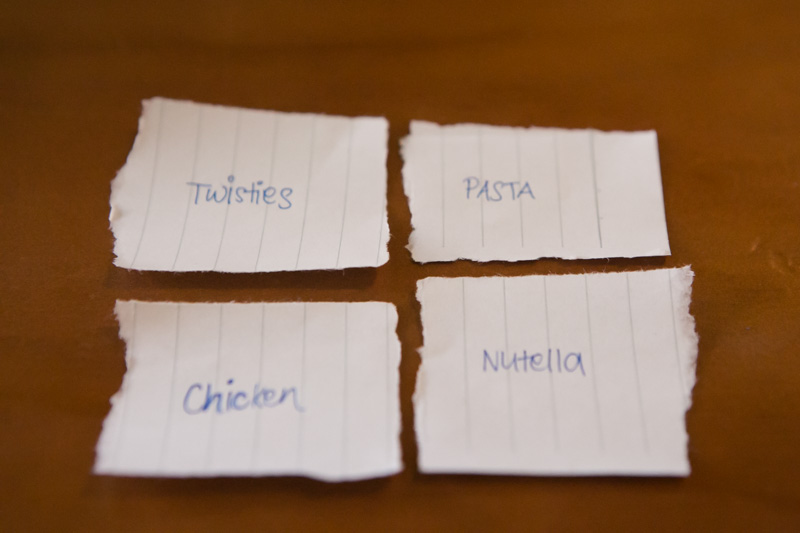 I then proceeded to pick four which resulted in Nutella, chicken, pasta and Twisties. Oh boy. 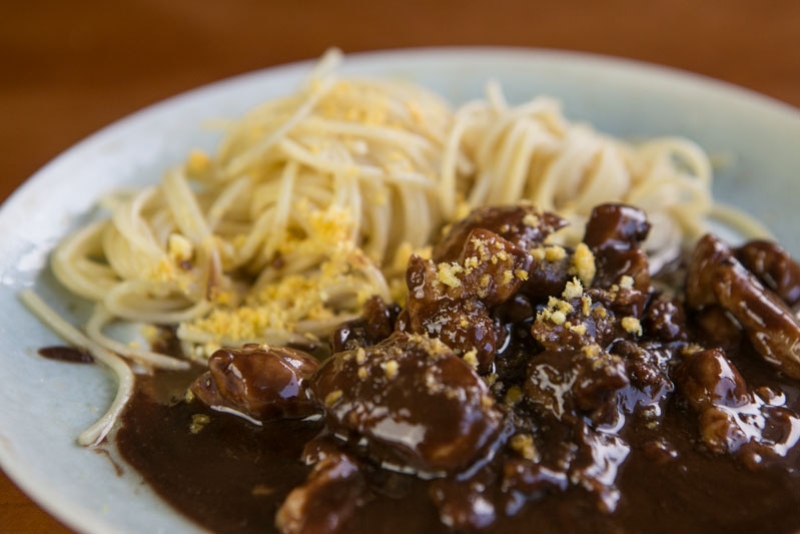 While the Nutella and chicken were cooking, it smelled amazing. But the end product was an entirely different story. Topped with some Twisties crumbs, this dish was…peculiar, to say the least.

It sent all sorts of confusing signals from my palate to my brain. The supposedly savoury dish had become overwhelmingly sweet and my brain just couldn’t comprehend what was going on.

I don’t know why I subjected myself to this experiment, but I got to admit that it was an interesting experience finding out how nasty some of you guys are. Some of these combinations aren’t completely unpalatable but some are just downright inedible.

Moral of the story is, please just leave your food alone.