The very first Peach Garden Restaurant opened in Novena Garden in 2002 as a place for connoisseurs of Cantonese cuisine to gather. Since then, their success has led to multiple outlets and concepts opening around Singapore, including a noodle restaurant as well as a hot pot restaurant.

Even though Peach Garden is pretty concealed in Thomson Plaza, the restaurant still manages to attract crowds of loyal customers who make their way here for the one peach. Old, young, families, corporate, I think Peach Garden has managed to conquer every age group of the Chinese consumer. 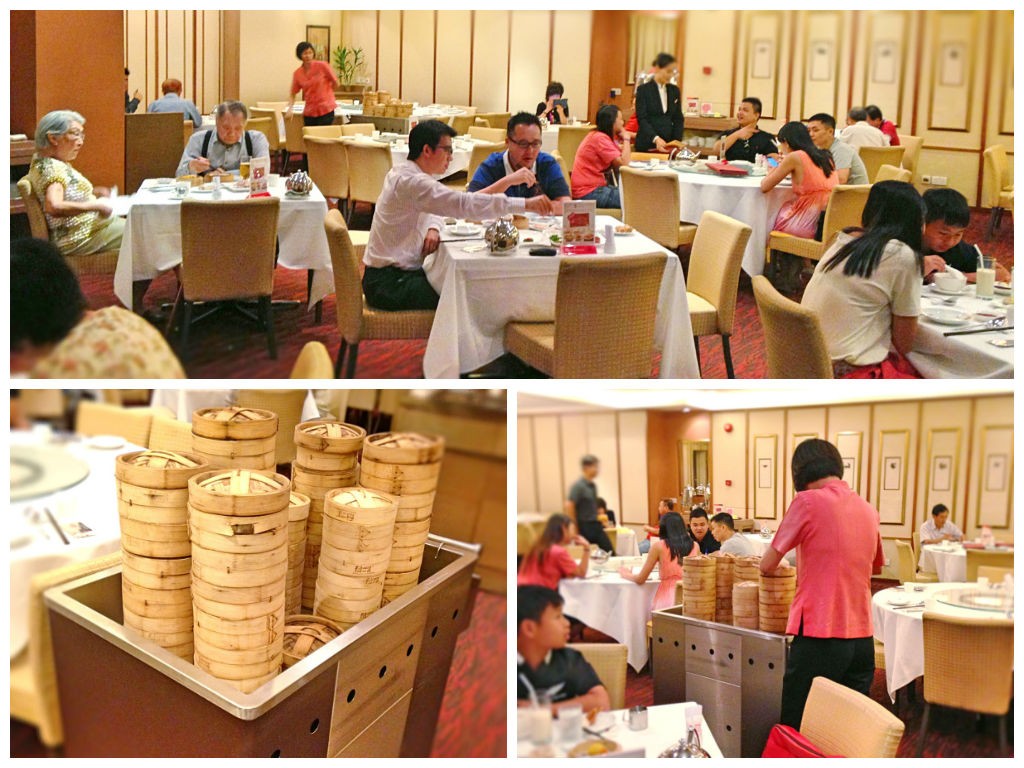 My focus today was on the dim sum, so you won’t see much main dishes except for a few appetizers. You can still find old school dim sum trolleys around, but you can just order off the menu anyway if you’re too young to understand what those are about. Smoked Duck with fresh mango and Lemon ($12). A zesty cold appetizer to start off, this is a very thai-inspired dish with the mango and sweet onion chilli sauce. Quite well done smoked duck and pairs beautifully with the mango, but my personal preference is for a hot starter amongst all the hot teas and dim sum. 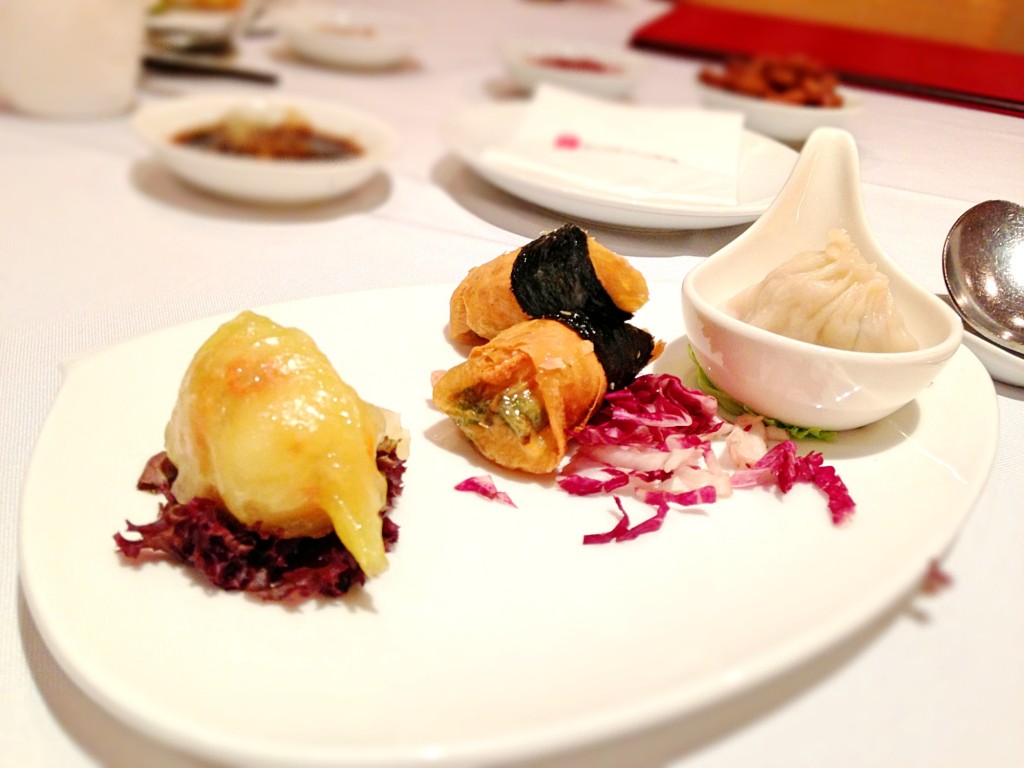 The Cordyceps Flowers Dumpling was a huge, premium har gao. Very juicy with prawns with a thin yet firm dumpling skin, with quite subtle Cordyceps flavour. Normally I don’t like beancurd skin, but the Deep-Fried Bean Skin roll had a really crispy skin and you could barely taste the beancurd taste which I liked. Xiao Long Bao was pretty normal though, and could have used a bit more soup in it. 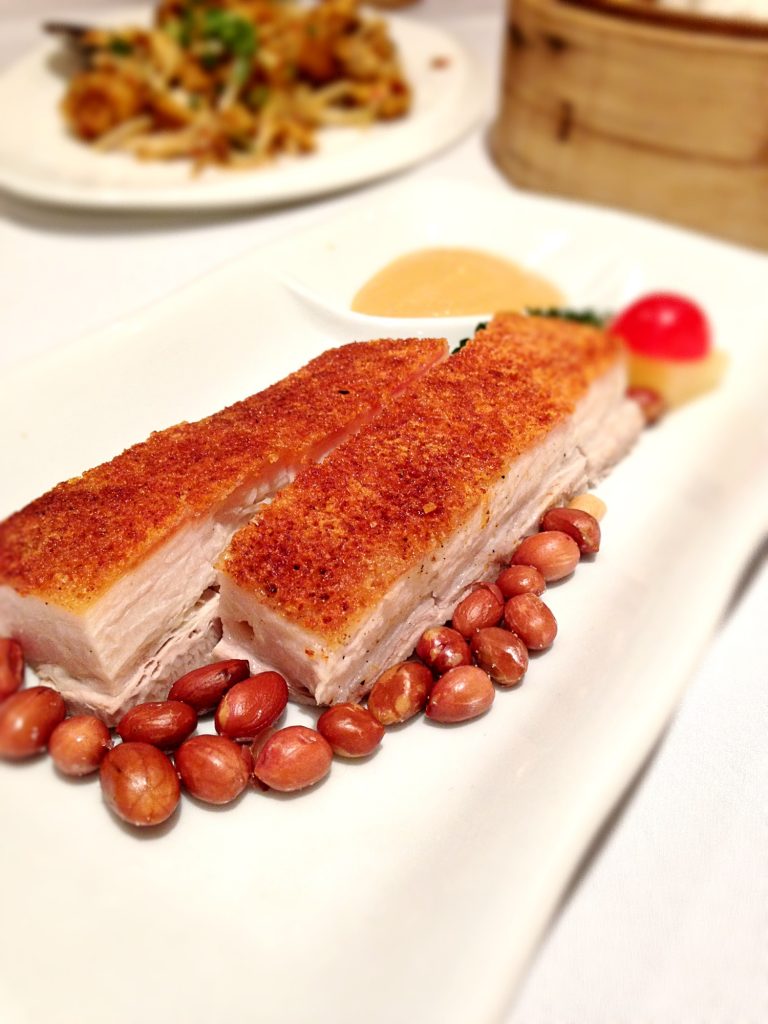 Roast Pork Cube ($12). The roast pork belly here was quite lean, and had that last layer of fats trimmed off. Still very tender with a crispy skin, but it arrived at room temperature and taste would have been much more enhanced if it was warm. 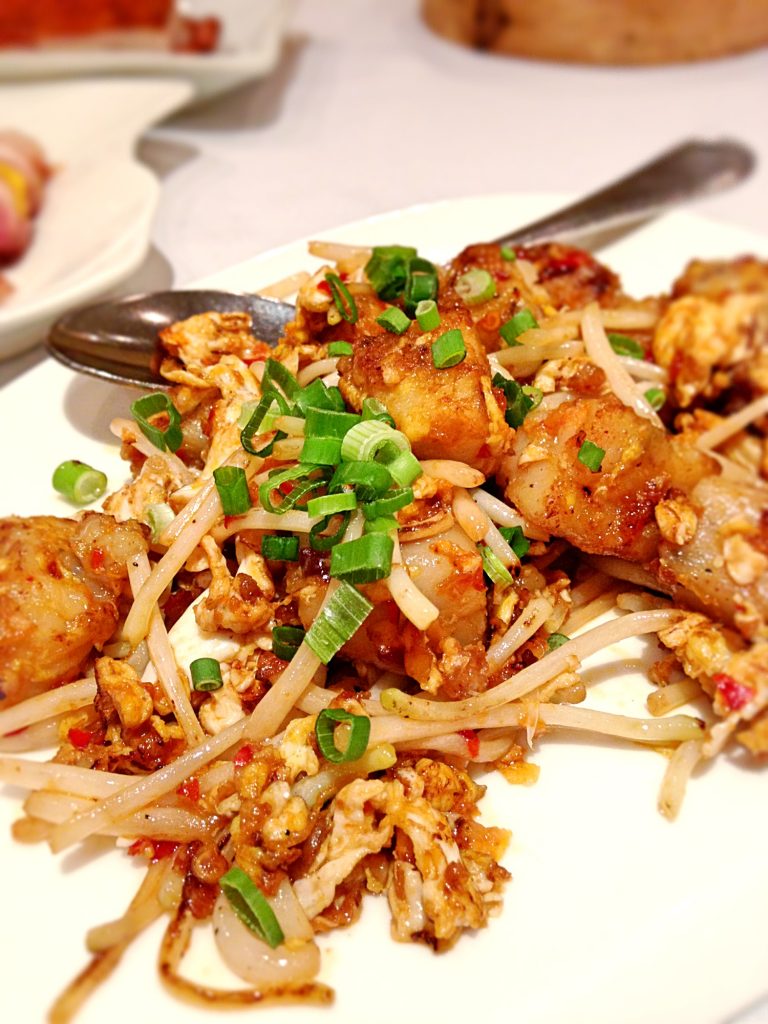 Fried Carrot Cake with XO Chilli Sauce XO 辣椒罗卜糕 ($10). There was a tad more chili than XO flavour, but nonetheless still quite fragrant with pieces of Chinese sausage. Not overly mushy radish cake, if the exterior had a bit more crisp it would have been perfect. From top:  Fresh Crab Meat and Crab Roe Thick Soup with Fresh Scallop ($9), Sze Chuan Hot and Sour Soup ($6.80). The Scallop soup broth was a bit dull and not as exciting compared to the Sze Chuan soup. Good portion of scallops, roe, prawns and mushrooms though.

The Sze Chuan Hot and Sour soup was a completely different animal. Very powerful, and the spiciness kind of creeps up on you after a few cumulative spoons, Generous amounts of prawns, bambo shoot, eggs and mushroom as well as slices of ginger. I like that there wasn’t much tofu. 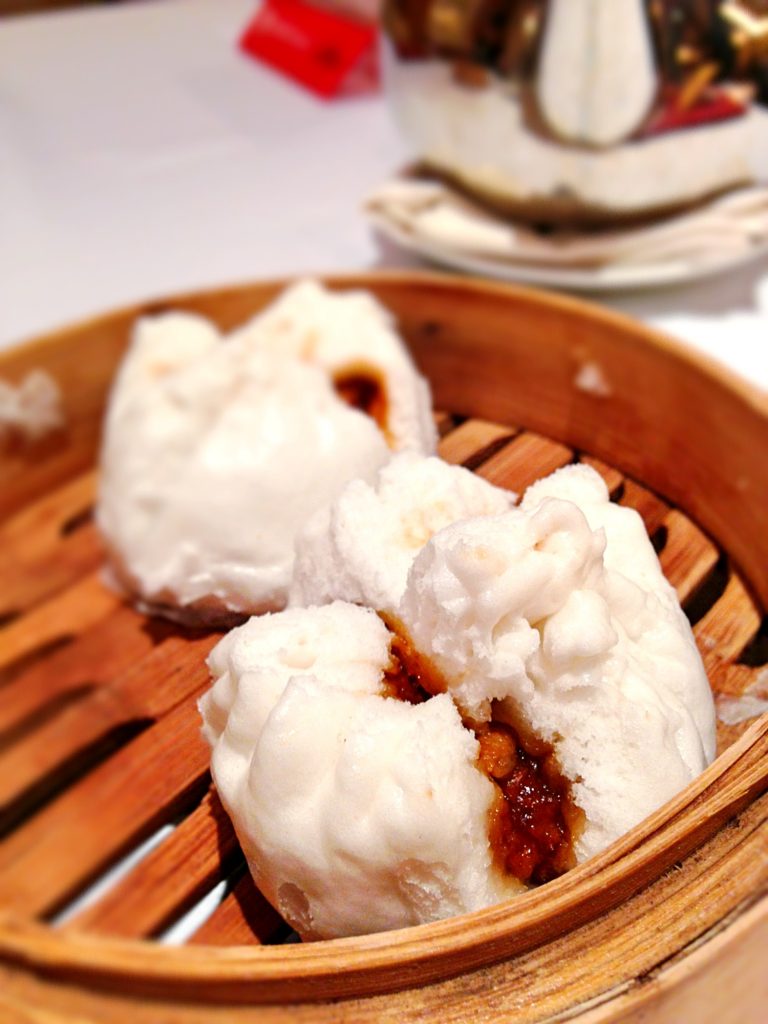 Steamed Siew Mai with Crab Roe 蟹皇蒸烧卖 ($5.20). Good, meaty siew mais with a little hint of seafood from the roe. 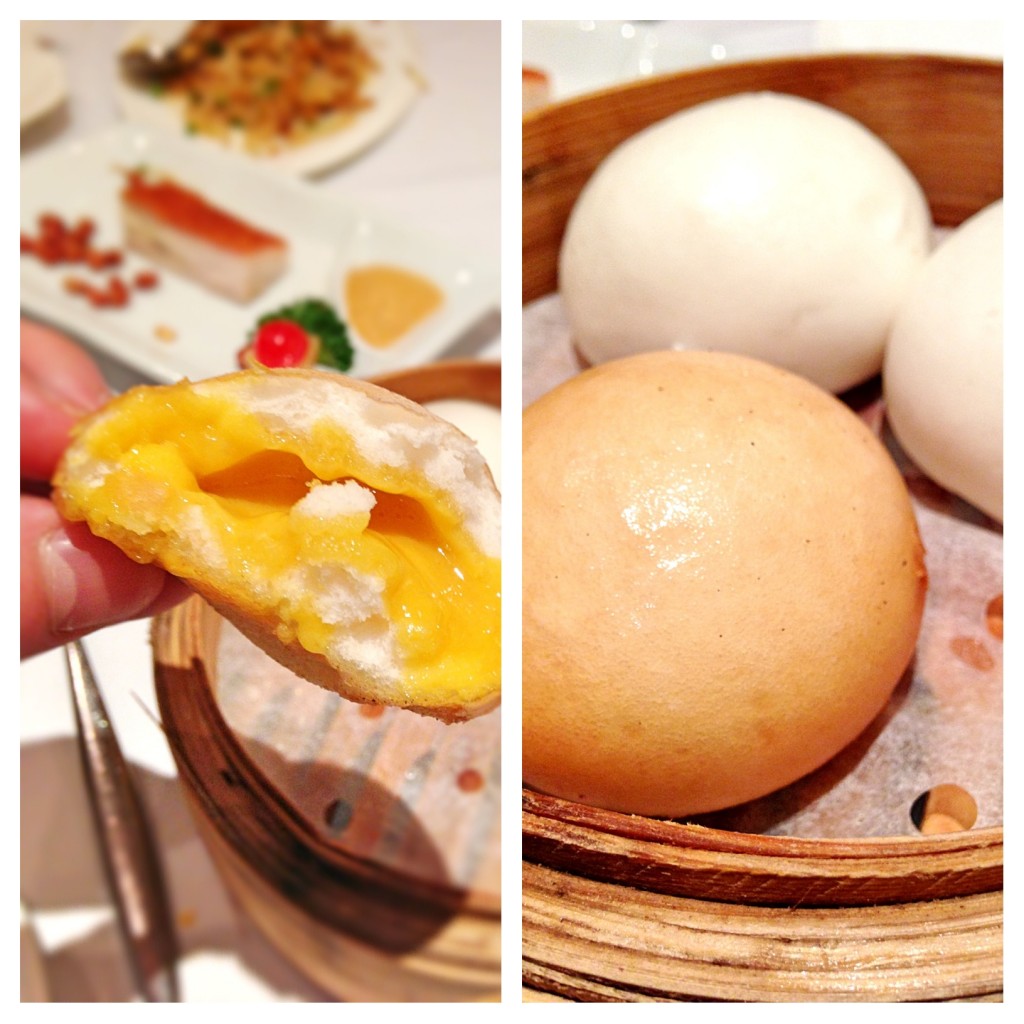 Deep-Fried/Steamed Yolk Cream Bun 流沙奶皇包($3.90). Of course, who can forget the liu sha bao at dim sum. The cream custard was good, but a bit too liquid/flowy, an uncommon problem. Texture wise doesn’t work so well with the steamed bun skin, but the combination is good with the deep-fried version as the wetness takes away the dryness of the fried skin. 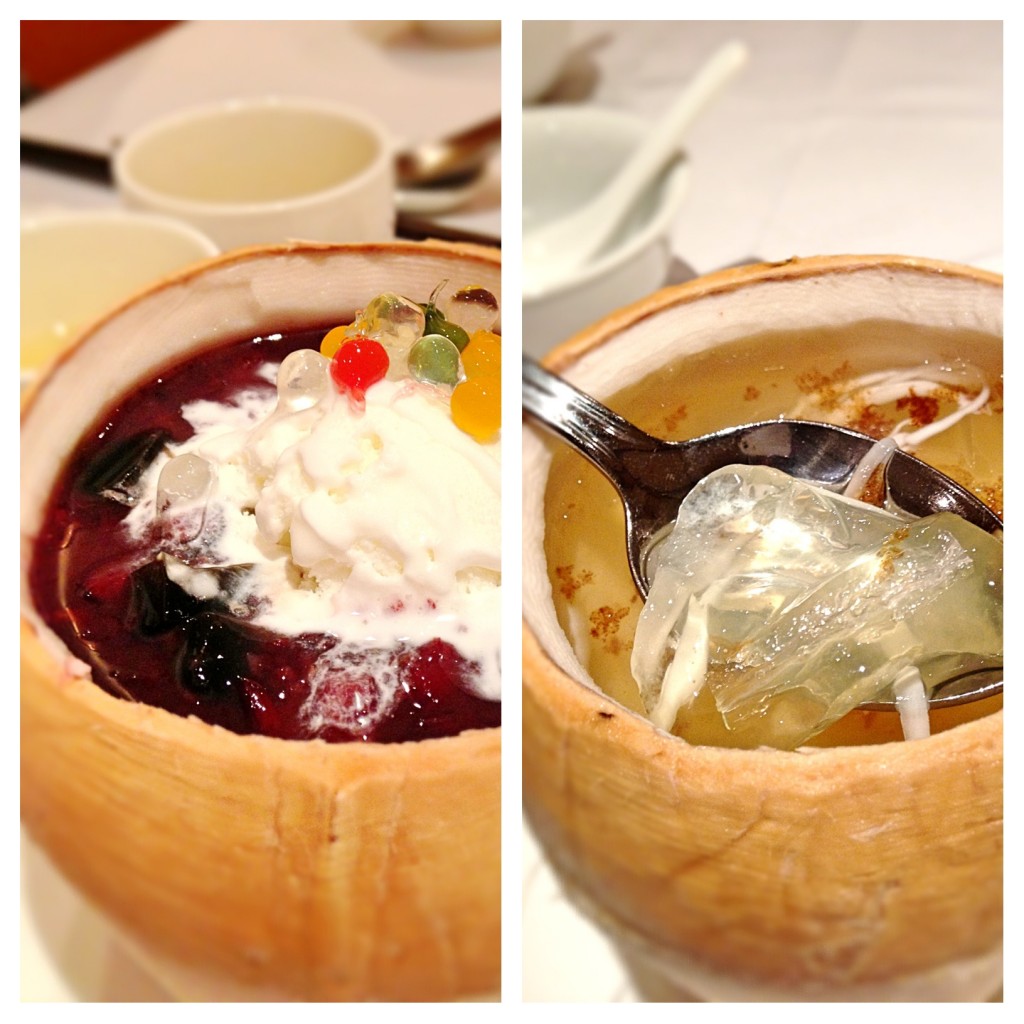 The Jelly Royale was just swimming in young coconut juice rather than the regular syrup, and is absolutely refreshing with a clean sweet palate and that lingering coconut taste. Also has julienne strips of coconut flesh to add texture.

These are literally the best desserts I’ve ever had in a Chinese restaurant.

The service standards at Peach Garden Thomson Plaza were impeccable. Our table’s server was very conscientious, and even inquired if there were any dissatisfaction when we left certain dishes unfinished (we were just too full). This guy even wanted to ‘refresh’ our tea with a new cup as it had cooled down.

Honestly I’ve not had such attentive service even in upscale fine-dining restaurants, and I’m obliged to highly commend Peach Garden about it. Good food, good service, these are the reasons to visit Peach Garden.

In case you wanted even more value-for-money, there’s a high-tea dim sum buffet at $20.80++ on weekends, 3pm-5pm, which is extremely worthwhile.

*Dim sum is only served for lunch