If your idea of upgrading your instant noodles is to crack an egg into it, you might want to think again.

Since the ramen burger craze of 2013, instant noodles are getting a new look. They aren’t just for the poor university student staple anymore.

They cook in minutes, are practically fool-proof, can be found just about anywhere, can be kept in your pantry for ages, are kind of bad for you, but are oh so addictive and strangely comforting. But they don’t always have to be so boring.

Just to make sure you don’t miss out on the latest maggi-trends, here are some recipes that I’ve tried out. And who knows? One of them might just be the new cronut. How to make it: Cook 1 packet of instant noodles until they’re almost done (about 2 minutes cooking). Drain and set aside. When they’re slightly cool, crack in 1 egg and add in the noodle seasoning. Shape the noodles into 2 bun-sized patties and refrigerate until firm, about 20 minutes. Heat 1 tablespoon of olive oil on a pan over medium heat and fry the noodles until they are crisp and hold their shape. Once the “buns” are done, simply assemble the burger with all your favourite toppings.

Verdict: This was really easy to make, and is actually more filling than regular bread buns. The MSG laden seasoning packet from the noodles save you the trouble of seasoning the noodles yourself and is packed full of flavour. I went for a pork burger with melted cheese, a sunny side up. ketchup and some lettuce (because you know, you need your veggies). And this recipe is totally customisable, from the noodle seasoning to the components of the burger. Mmmmm….

How to make it: Cook 1 packet of instant noodles until they’re almost done, drain and set aside. In a separate bowl, beat 3 eggs and add in a handful of diced carrots and spring onions and add in the seasoning packet from the noodles. Heat 1 tablespoon of olive oil in a frying pan over medium heat. Add in the egg mixture and layer the cooked noodles on top. When the eggs are just about cooked, carefully roll the omelette over itself to form a log shape. Wrap the omelette up in aluminium foil to cool so it holds its shape when sliced.

Verdict: Great if you’re looking for a hearty breakfast. Be careful not to overcook the noodles so they aren’t too soggy in the omelette and keep their texture. The seasonings and add-ins to the recipe are fully customisable as well. Add in some crispy bacon if you’re feeling extra naughty. 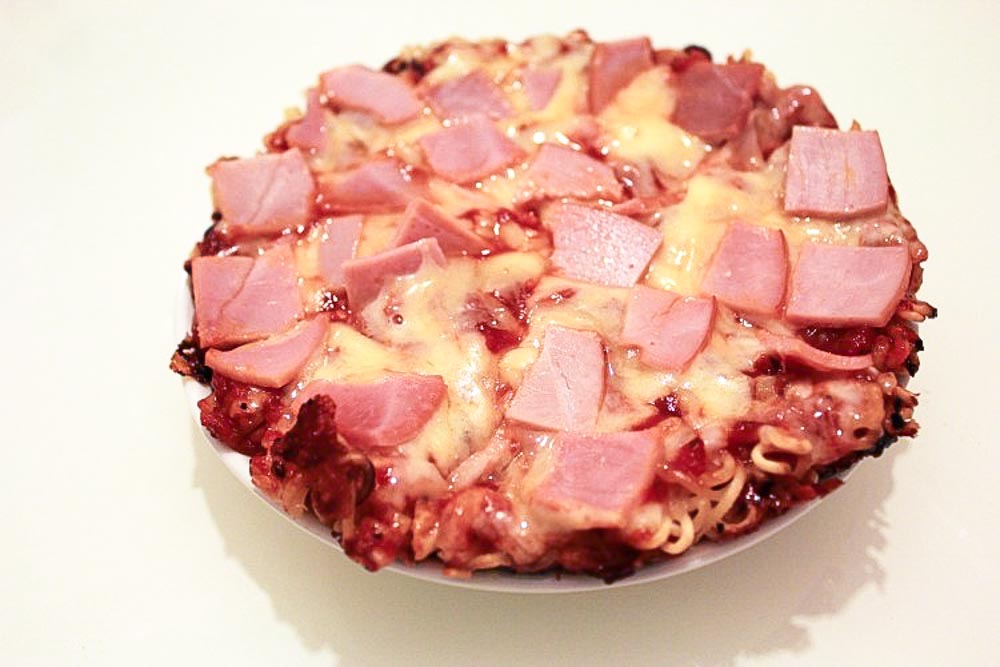 How to make it: Cook 2 packets of noodles until they’re almost done, drain and set aside. Heat 3 tablespoons of olive oil in a frying pan over low heat. Place the noodles in the frying pan and spread it out to form a pizza shape, ensuring that there are no gaps in between. Spread a thin layer of cheese to act as a barrier to prevent the pizza sauce and toppings from leaking through. When the cheese has melted, spoon on the tomato sauce over it and add in your favourite pizza toppings (pepperoni, salami, pineapples etc.) , and sprinkle more cheese over top.

Verdict: I was really happy with how yummy this turned out. I might just make pizzas like this from now on. Nice and crisp just like a thin crust pizza thanks to the amount of oil which essentially fried the noodles to a golden crisp. Keep an eye on the noodles to make sure they don’t burn. This is a refreshing change from the doughy pizza crusts which I did not miss. Also fully customisable to your liking.

How to make it: Cook 1 packet of instant noodles until they’re almost done (2 minutes cooking), drain and set aside to cool. Add 1 egg, 2 tablespoons of plain flour, 1/2 teaspoon of baking powder, 2 tablespoons of water and the noodle seasoning into the noodles and whisk together. Spread the mixture onto a waffle iron on and cook until the edges are crisp, about 5-8 minutes.

Verdict: I love waffles. So instant noodle waffles are a winner to me. They were crisp on the outside and soft and cake-like in the middle just like a regular waffle. Perfect for breakfast with a side of bacon and a sunny side up. Skip adding the savoury seasoning if you want to spread some jam or ice-cream on top of them. How to make it: Make a dry rub with 1/2 cup cornstarch and 1/2 teaspoon of baking powder. Whisk together a thick batter of 1 cup of plain flour, 1/2 cup of cornstarch, 1 1/2 cup of water, the seasoning packet from the noodles and 1 packet of crumbled instant noodles.

Heat up some cooking oil in a pot to deep-fry the chicken wings. Working in small batches, dredge the wings in the dry mix first, and then dip it in the wet batter, making sure to pack on as much of the crumbled instant noodles on there. Fry for about 7-10 minutes, until golden brown. Drain off the excess oil on kitchen towels and serve. You will get about 12 chicken wings with this recipe.

Verdict: The noodle coating makes the chicken extra crunchy as all the little edges crisp up. I used the curry flavoured seasoning for this to give it an extra kick. This is definitely worth a try if you’re craving an upgraded kind of KFC.

How to make it: Cook 1 packet of instant noodles until they’re almost done, drain and set aside to cool. Add 1 egg, 1 tablespoon of plain flour and the noodle seasoning and mix well. Heat 2 tablespoons of olive oil in a pan over medium heat and fry dollops of the batter until very crispy on each side, about 7 minutes.

Verdict: There is something about the curly noodles and how they crisp up when fried in oil. Okay so technically there is no nutritional value in this dish, but if you like you could add some corn or carrots to make really yummy instant noodle corn fritters. 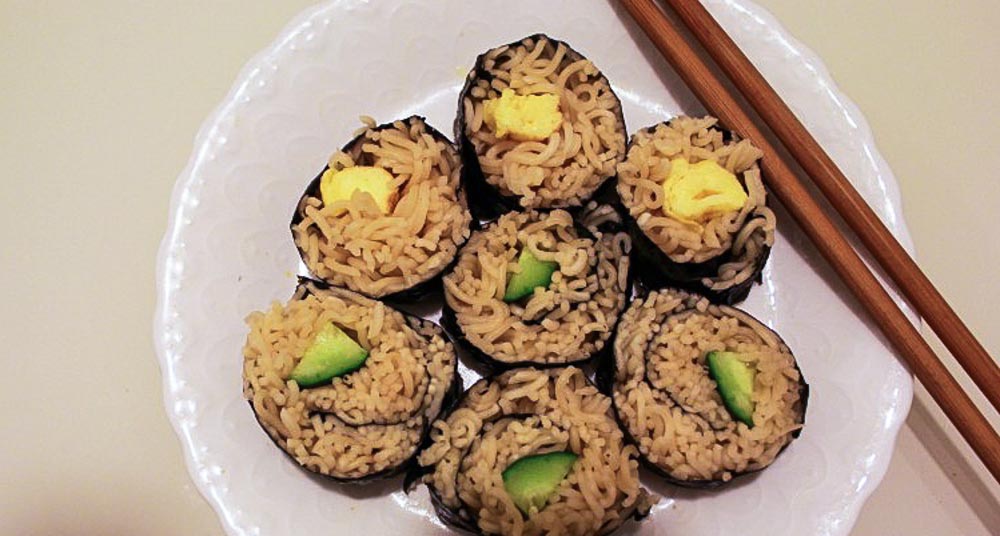 How to make it: Cook 1 packet of instant noodles until they are almost done, drain, stir in 1 tablespoon of sushi vinegar and leave it to cool. Chop up your favourite sushi ingredients (eggs, cucumbers, salmon etc.) into long thin strips and set aside. To assemble the maki, lay out a piece of sushi seaweed on a bamboo matt, shiny side down. Place a thin layer of noodles while laving a small margin at the top. Fill the rolls with the prepared ingredients and roll up the maki tightly, as you would a regular sushi roll. Slice with a sharp knife and serve.

Verdict: It tastes just like a sushi roll made with rice with the sushi vinegar added. It was different texture-wise though. The noodles aren’t as sticky as sushi rice and could not mimic the bite it gives. A familiar taste with a different texture for when you get bored of the normal rice rolls.

How to make it: Cook 1 packet of instant noodles until they’re almost done (2 minutes cooking), drain and set aside to cool. Add 1 egg and the noodle seasoning and mix well. Heat 2 tablespoons of olive oil in a pan over medium heat and lay the noodles out into a rectangle. Fry until one side is crisp, flip over and roll up 1 hotdog and some cheese into a log shape. Fry on all sides until golden brown.

Verdict: The classic combination of hotdogs and cheese but replaced with instant noodles and not the regular hotdog buns. Which actually works better because all sides of the noodles got crispy and you get that burst of cheese the moment you bite into it. Deep fry the instant noodle hotdog if you want it extra crispy and can afford the calories. 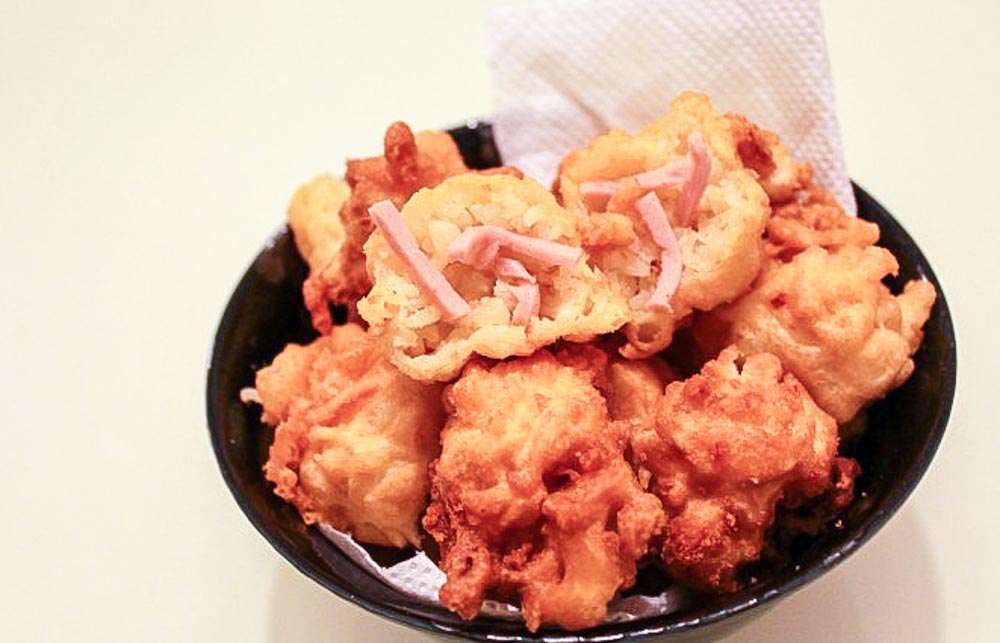 How to make it: Cook 1 packet of instant noodles until they’re almost done, drain and set aside to cool. Add some mozzarella cheese and chopped ham to the cooled noodles and roll them tightly into squash ball sized portions and refrigerate until firm for about 20 minutes. Prepare a beer batter with 2 cups of plain flour, 1 1/2 cups of beer and the noodle seasoning. Heat up some vegetable oil in a pot, dip the noodle balls into the beer batter and fry for about 5-7 minutes until golden brown. Drain off excess oil and serve.

Verdict: I could totally see this as a bar snack. Kind of like deep fried mac & cheese balls but better. The beer batter enhanced the taste of the dish and made for an airy coating. I also love how rugged and unapologetic they look. These fried balls are really addictive but the carbs in the noodles fill you up fast.

How to make it: Cook 1 packet of instant noodles until they’re almost done (2 minutes cooking), drain and set aside to cool. Add 1 egg and the noodle seasoning and mix well. Shape the noodles into two slices of “bread” using cling film and place in the refrigerator for about 20 minutes until set.

Melt a knob of butter in a pan over medium heat and fry the noodle patties until golden. To assemble, spread some cheese on one side and top with the other noodle patty. Fry until crisp and the cheese is melted. About 5 minutes.

Verdict: Just like a regular grilled cheese sandwich, with a toasty and buttery crust. Instant noodles and cheese surprisingly go really well together too. Get creative with your sandwich! Add some bacon or even kimchi.

So the next time you reach for that packet of instant noodles, how about taking the extra time to bring your plain old noodles to the next level.

Yes it is that much more effort, but actually not that much effort at all. These recipes are all pretty simple to do but results are totally worth it.