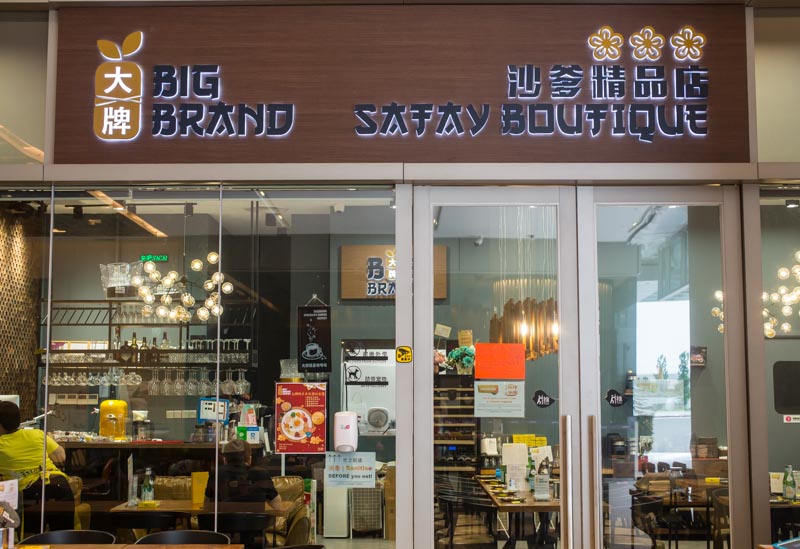 Located within China Square Central at Telok Ayer, BigBrand Satay opened its doors to the public less than three months ago. Fairly new to the game, the concept of hawker to “fine-dining” was implemented by the owner, Mr Lian Wee Loo.

To take you through his thought process, Mr Loo wanted to start a business with a more localised version of yakitori, and satay came to mind. He added that it was a practical business idea since it’s easy to prepare satay. 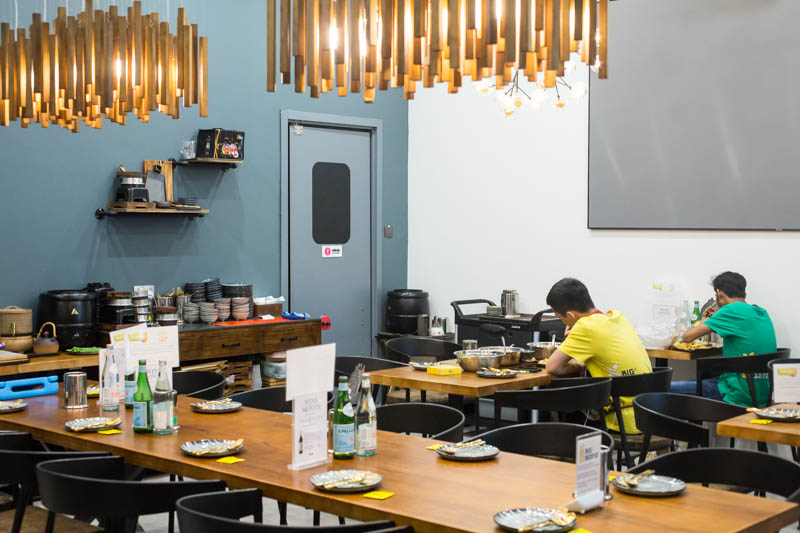 Walking in, you can tell that this was a more atas version of your average satay shop in hawker centres. The tables were lined with porcelain plates, cutlery and packets of hand wipes. These wipes were also not chargeable, unlike in the zi char stores around Singapore. 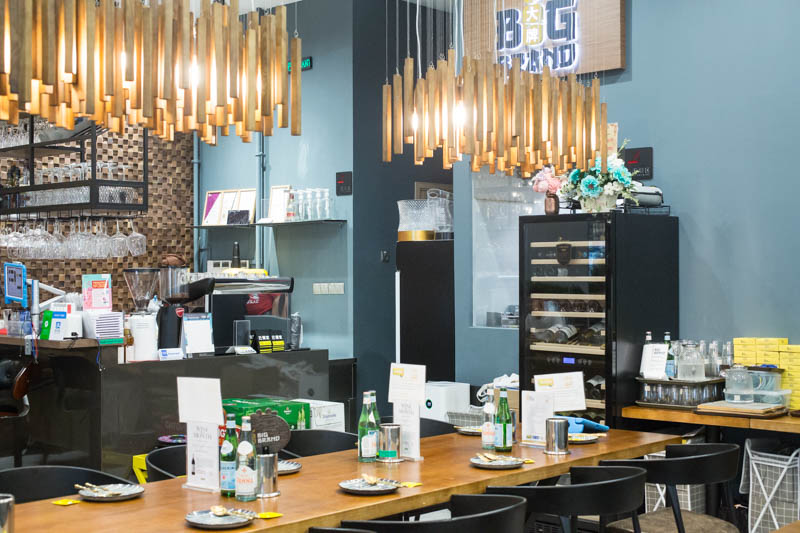 With dim hanging lights, it was evident that this was no ordinary satay stall. If you’re into theatrics, there’s even a little viewing window for you to watch as the staff prepares your satay.

Believe it or not—Mr Loo swears by pairing a nice glass of Merlot with the satay he serves, apparent from the looming wine cooler beside the viewing window. From the viewing window, I managed to catch a glimpse of one of the staff preparing the food I ordered. I felt that this invoked a nice touch of suspense—I couldn’t wait to try all that grilled goodness! The only difference this had from a satay stall in a hawker centre was that I couldn’t smell the smokiness of the food while it was being prepared.

We started with a plate of Jumbo Tiger Prawns (S$3.80 per stick). Charred even though it was cooked on an electric grill instead of charcoal, it looked extremely appetising. 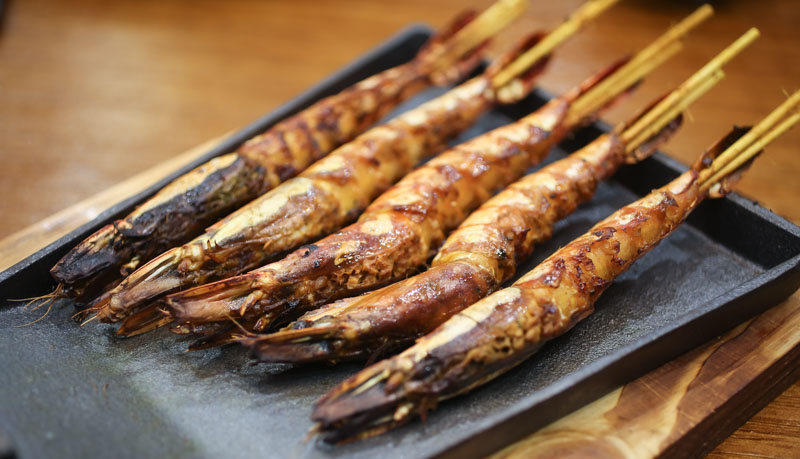 Unfortunately, I felt that I couldn’t really taste the marination within the flesh of the prawn. Granted, I enjoyed the passing flavour on the exterior, but that was all I could get in terms of seasoning.

Flavours aside, the prawns were extremely fresh, and it was reasonably priced considering the size of the prawns. Up next was the Sichuan Mala Pork (S$1.60 per stick). Of course, I had to try mala-flavoured satay. Grilled to a golden-brown, I picked up the faint scent of mala spices from it almost immediately. The meat gave off a very faint mala flavour, and I was thankful it wasn’t too spicy. I felt the slight numbness of Sichuan mala in my mouth and on my lips while savouring this spicy dish. To me, this dish was delicious and addictive. The more I ate, the more I craved for it. When the Truffle Pork (S$2 per stick) was served, I was overwhelmed by the strong fragrance of the truffle oil. The visible bits of truffle on the pork got me very excited to give this satay a shot. 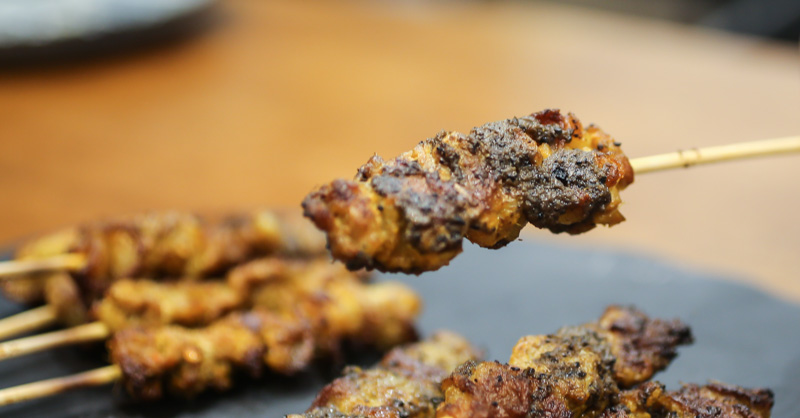 The taste of the truffle was easily detectable from just one bite. For a truffle lover like me, it was definitely heaven on a plate.

The only thing I didn’t like about this dish was that it got a tad bit too jelak for me the more I ate, and it progressively made me parched for water. There was also excessive oil used, making the dish a little too greasy overall, though it wasn’t to the point where it ruined the whole dish for me. Be mindful when ordering this if you’re conscious of the greasiness of your food. 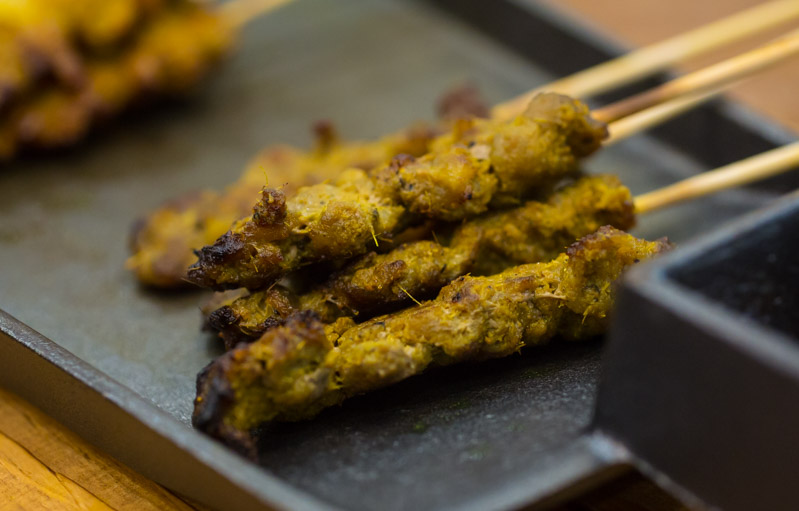 One of the signature flavours at the restaurant is their Japanese Wagyu Beef (S$6.80). Specifically created for the satay theme, BigBrand Satay created their very own Japanese version with premium Wagyu beef.

I loved that the meat was tender and chewy. It was well-seasoned and extremely fragrant. However, I feel that I wouldn’t spend so much on just one stick of satay. As much as I enjoyed this dish, I wouldn’t recommend it solely due to its price. 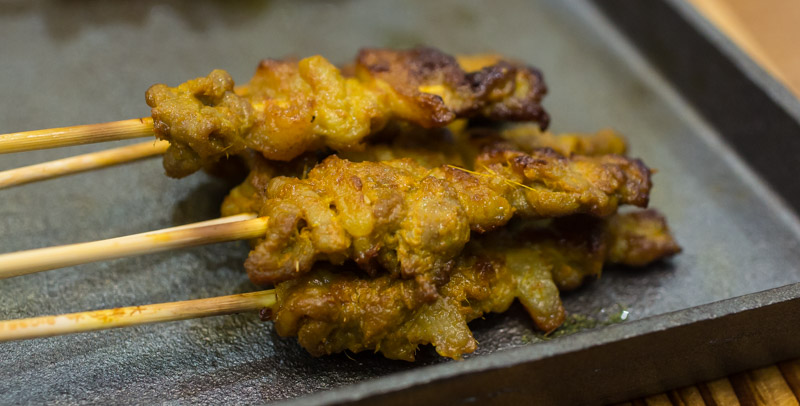 One of the most popular flavours at BigBrand Satay is their Signature Pork (S$1 per stick). Alas, this was one of the more mediocre dishes out of those I’ve tried.

The meat was a little tough, which might be preferable for some. For me, I usually opt for more tender meats. The fats were not the best I’ve had, but they were alright. Funnily enough, this tasted like normal satay you can find at normal hawker centres. Given the price, I would just head down to the hawker centre to enjoy this dish. BigBrand Satay’s special satay sauce was served in a mini pot alongside the various satay we got. Dished out piping hot, the sauce held a sweet aroma to it.

Noticeably different from the average peanut sauce, this sauce contained many different fruits like pineapple and starfruit. I was highly impressed with how the sauce went so well with the satay. 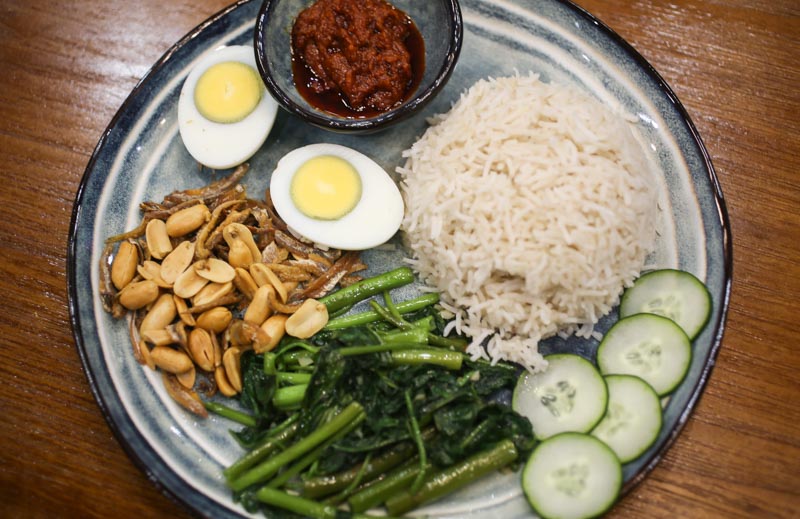 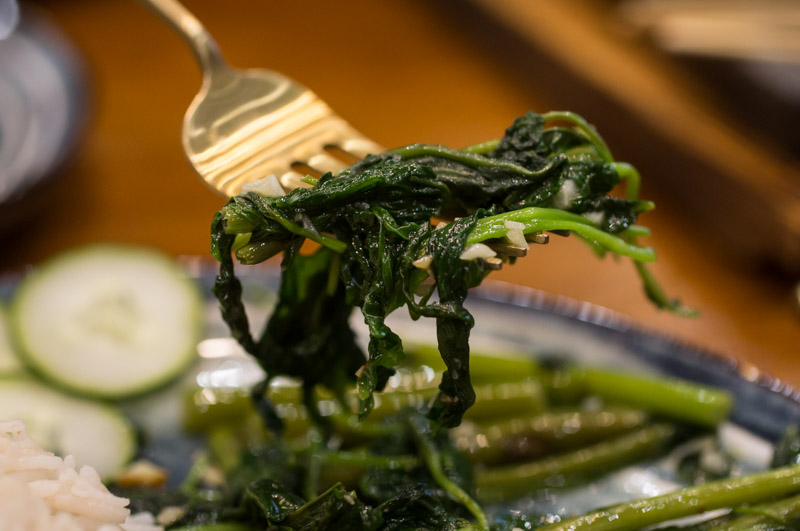 The dish came with kang kong, which was surprising to me because I have never eaten Nasi Lemak served with this vegetable before. The kang kong was fresh, lightly-seasoned but delicious. More importantly, if you’re not already sold by this healthy option, every ingredient used was organic.

The ikan bilis were exceptionally crispy and crunchy, adding the traditional salty fishy flavour to the dish. Fairly spicy, the sambal belacan tied the dish together and brought it to a blissful, guilt-free satisfaction. If the sambal belacan gets too unbearable, there’s always cucumbers to cool you down.

Dining at BigBrand Satay was definitely a positive experience for me because of the innovative and delicious flavours of satay offered. Their special sauce was unarguably the best part of the meal for me. However, although the Nasi Lemak was significantly healthier than the traditional option, it was rather subpar to me.

I would recommend this to my family and friends for the quality of food, but I just don’t think that it’s very value-for-money.

If you’re willing to splurge on satay, you should, without a doubt, head down to BigBrand Satay to try out the Truffle Pork, Sichuan Mala and Japanese Wagyu Beef satay. If you’re looking mainly just to satisfy your satay craving, I think it might be best you give this one a miss.