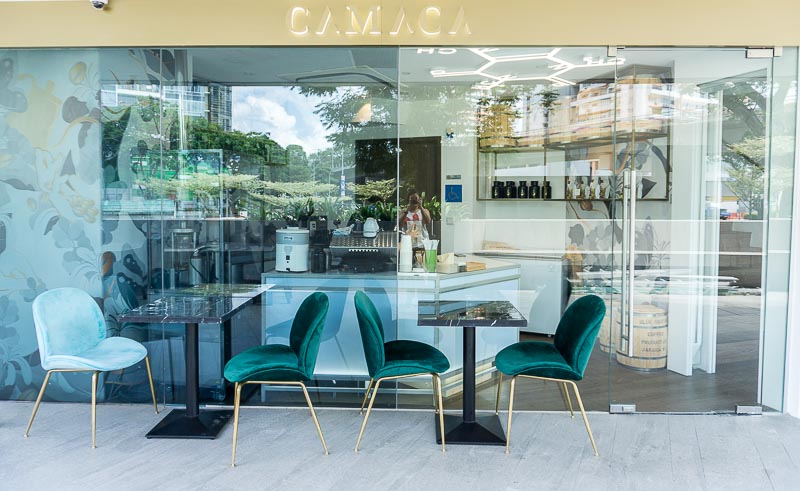 Camaca was born out of a TCM practitioner’s desire to help his patients lead a more holistic life, outside his clinic appointments, when he made an observation that most of the common ailments stem from an excess of sugar intake in most diets. 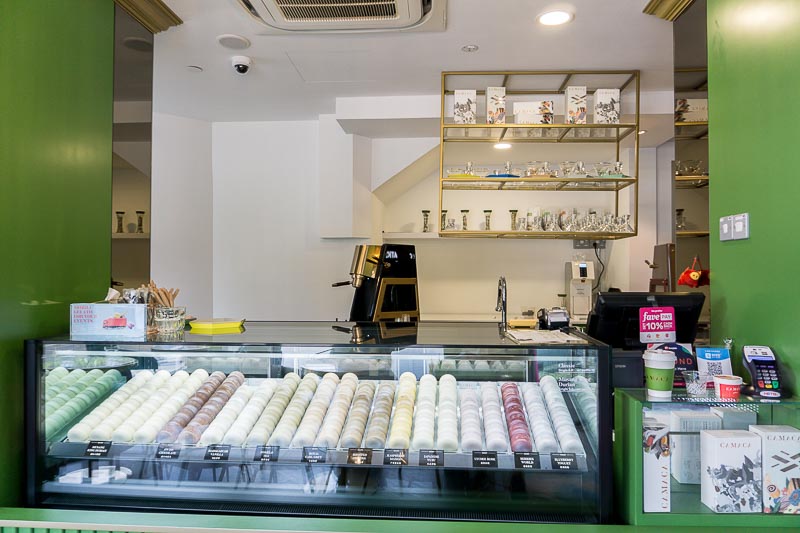 It started as a cafe serving sugar-free desserts in Taiwan, and has now expanded to Malaysia, China and very recently, Singapore. King Albert Park has seen a slow and steady increase of patronage, all thanks to new tenants offering novel and exciting services and F&B offerings for the neighbourhood. 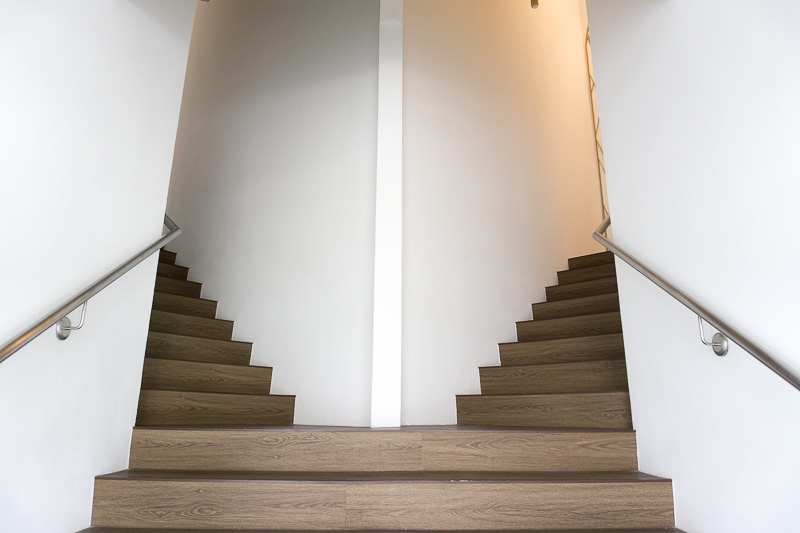 Camaca is a rather huge outlet, that owns three units in total, of which two have a second floor. When I went there, the second floor wasn’t ready but was in the midst of having final touches put in place for a super chic coffee bar where diners can soon view dedicated baristas brewing.

(Note: by the time this post is live, Camaca would have officially opened and the second floor ready to receive diners!) 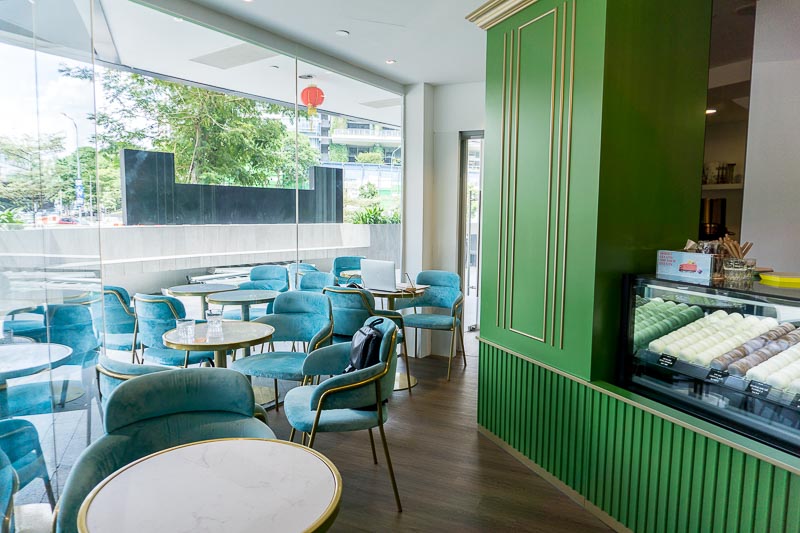 The vibe that the place gives off is reminiscent of the Great Gatsby, but clearly strategically placed in a flood of natural light. If you walk right through the shop, you’ll find a small work area where all their coffee is made and processed, and behind that is their hidden kitchen. That is where all the desserts are made in-house on a daily basis. 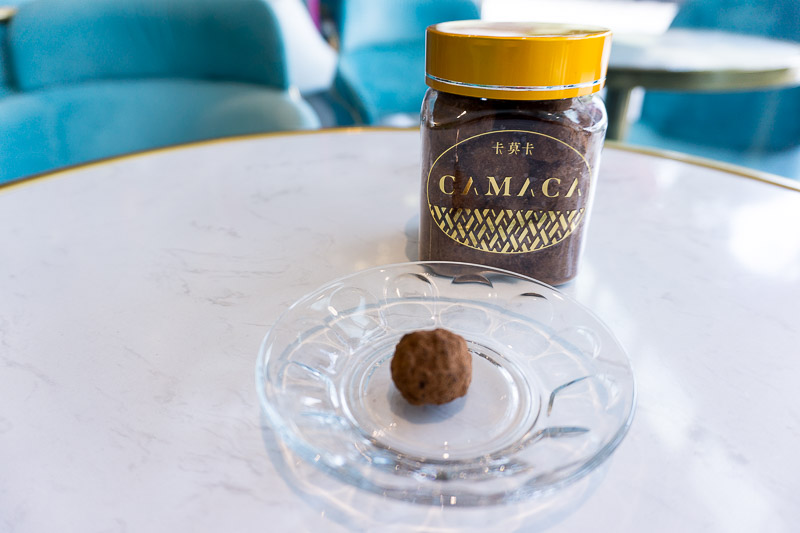 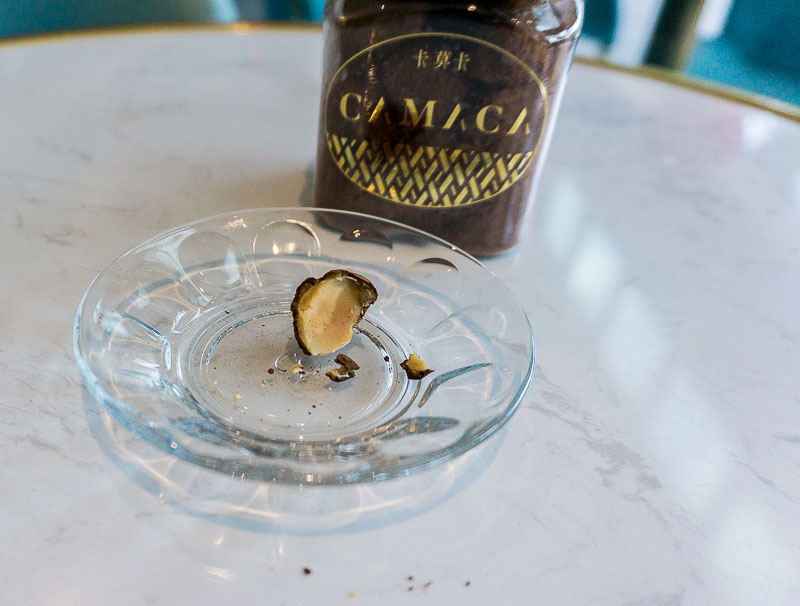 To start off, I had a small bite of their Caramel Choco Macadamia (S$20 per bottle), which is made of bittersweet cocoa powder that encapsulates a whole hazelnut. I, for one, prefer and love dark chocolate, so the bitterness wasn’t a bother to me.

I especially enjoyed that a whole nut is used, giving the whole one-bite treat a really woody, earthy and smokey nuance that sets it apart from just your regular dark chocolate. 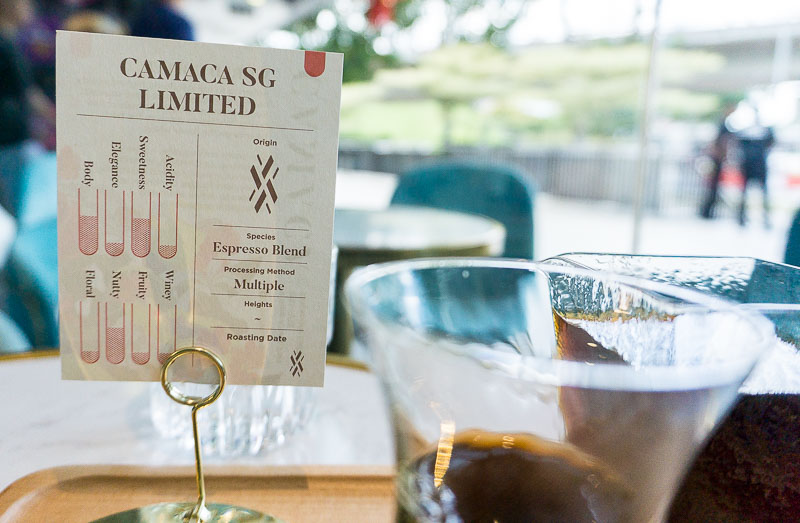 To go with my chocolate nugget, I had the Camaca SG Limited (S$6) which is a pour-over coffee that has a medium body and is less acidic. I told them that I’m a daily coffee drinker, and I always have my cuppa strong and black (no sugar nor milk). 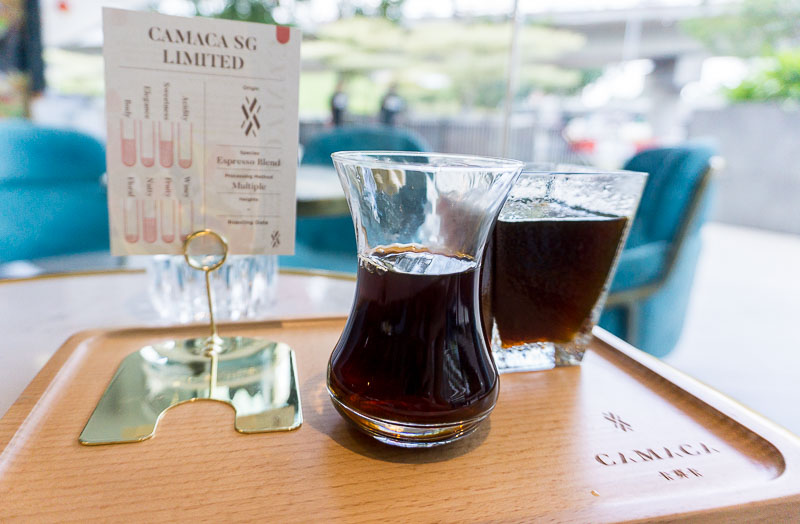 So for me, this one wasn’t as strong as I usually take my coffee. But it had a nice nuttiness on the finish, which I really enjoyed. I could still enjoy it despite allowing it to reach lukewarm temperatures, as I set it aside while I enjoyed my other sweet treats. 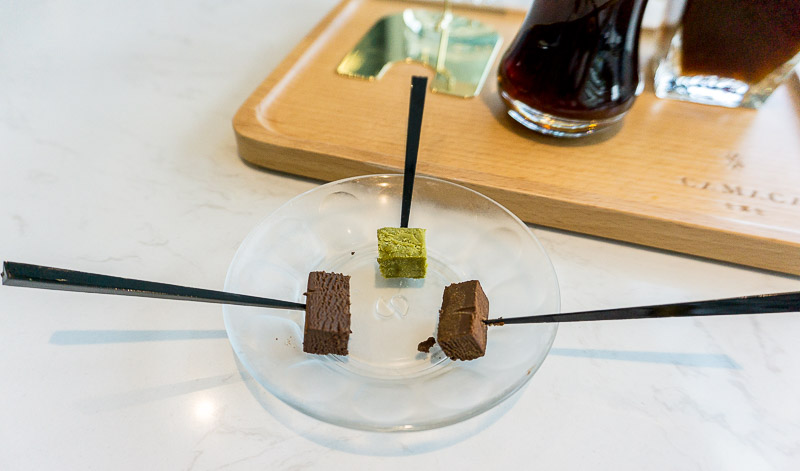 The 82% Nama Chocolate was very luxurious on the palate; like mousse, but not dense or cloying. My favourite of all three, personally. It had the right balance of sweet and bitter and might be easier for milk chocolate fans to transition to.

The 92% Nama Chocolate was quite earthy and had a woodiness to it that was also rather aromatic. It’s hard to believe that chocolate described as woody would be palatable at all, but dark chocolate aficionados, you know what I mean, don’t you?

Finally, the Jasmine Green Tea White Chocolate was the sweetest of all (naturally!), but it also lacked the smokiness that I adore about matcha powders. I’m not a fan of white chocolate so this particular treat didn’t tickle my fancy. Cake rolls are a dime a dozen and you can even find them at the neighbourhood bakery. I’m very on-the-fence about cake rolls because most times they’re bland or dry or the cream is too sweet.

The Vanilla Cheese Roll (S$4 per slice, S$16 for a whole cake) here was exceptionally cloud-like; I barely needed to chew to get it down my throat, and the cream was airy and only mildly sweet. Think of chiffon cake, but even lighter — that’s how pillow-soft it was.

I was very tempted to purchase an entire roll to bring home, but I had somewhere to be after that, so I decided against it. Trust and believe, the next time I return (and there will be a next time!) there will be a whole roll coming home with me! 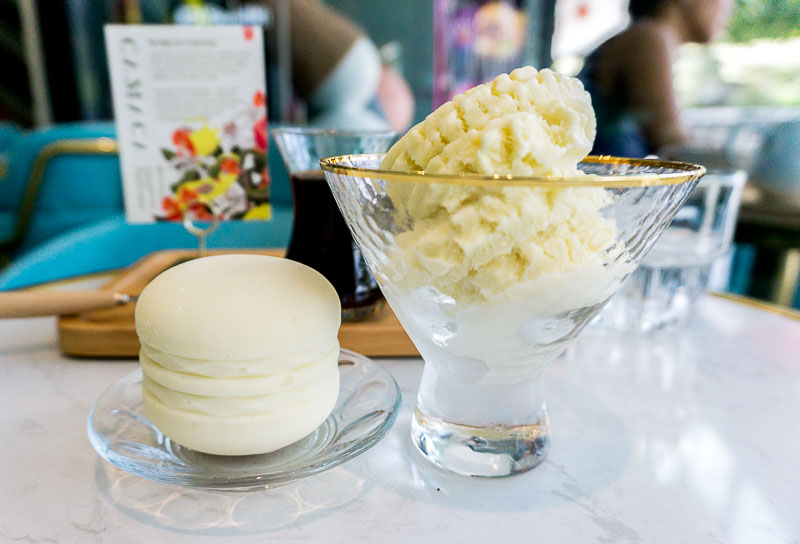 But what really intrigued me about this place was their macaron-shaped gelato. Yup, it’s gelato encapsulated in a macaron-esque shell, which is placed in a special machine to dispense sugar-free gelato. 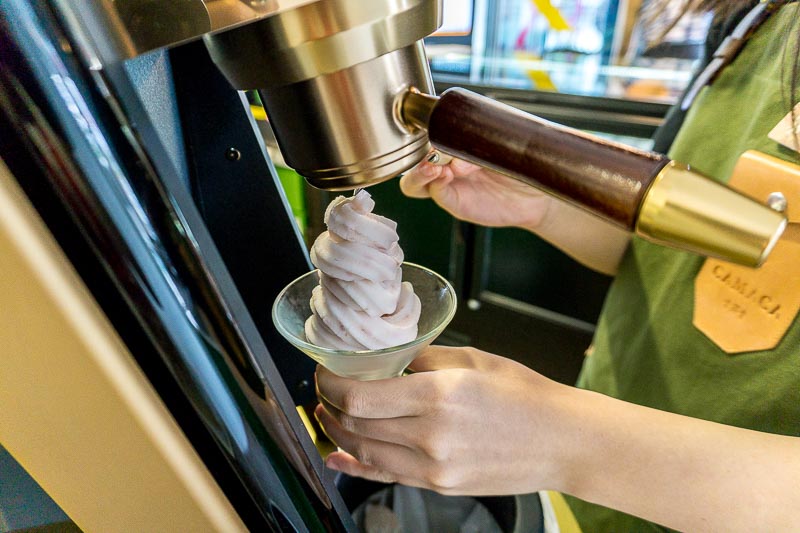 I asked if the pod was edible, but it turns out it isn’t. It simply holds the gelato and makes for convenient and hygienic storage, as well as prevents air from entering and ice crystals from forming, so that the gelato has a consistently smooth texture. 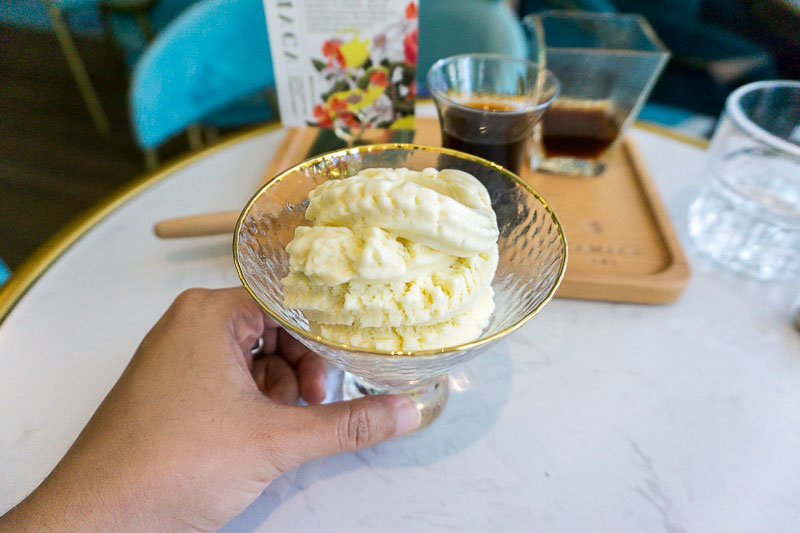 As someone who adores durian, I expect a strong and intoxicating taste of durian when I enjoy durian in any other form apart from the fruit itself. I wasn’t let down here, as the all-too-familiar fragrance of durian met my nose and proved itself to be one of the best durian gelato’s I’ve ever tasted.

It wasn’t sickeningly sweet nor overly pungent, and I took my time to casually indulge in every spoonful and lick of my teaspoon. 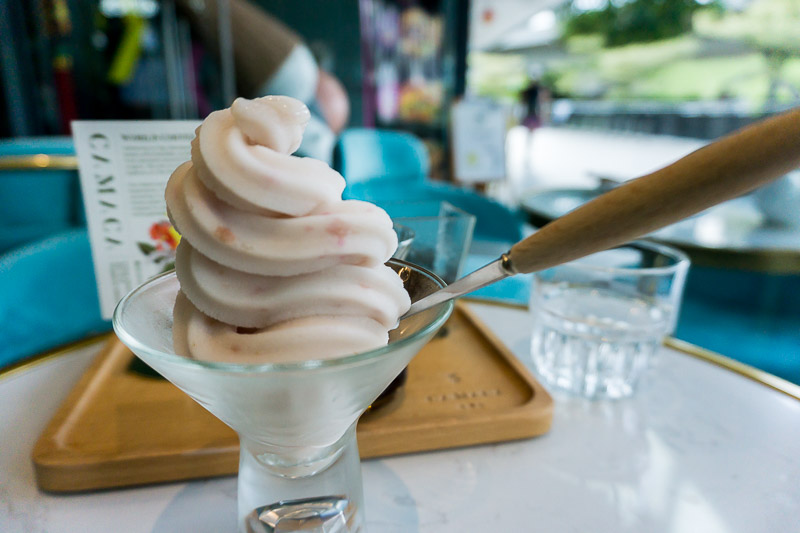 The Lychee Rose is a sorbet, and it wouldn’t be the first pick for me if it were any other day. But today I wanted to give it a try, given that I was told it’s supposed to be very gentle and mild.

Well, I can vouch for its incredible aroma as well as its very subtle flavour. The best part was the edible rose petals that gave the sorbet a nice contrasting texture. There was nothing acidic about it, unlike other sorbets I’ve tasted before, so for those who aren’t fans of big flavours, this is one scoop you’ll fall in love with very easily.

I’m so glad to see King Albert Park drawing in unique F&B establishments such as Camaca, and I know for a fact that I will return here. Despite the use of maltitol as a sweeter, in replacement of sugar, the desserts still tasted well-balanced.

The only gripe I would have to say is that maltitol does have potential laxative effects, so huge amounts of it can cause one to have the runs (as I did, after sampling one too many of their delicious offerings!), but hey, everything in moderation, right?

Previous articleGet Your Jolt Of Sugar Rush With This Hokkaido Milk Cotton Candy Drink At Don Don Donki Now Available In Orchard Central
Next article21 Sliders: All-Time Bazaar Favourite Has Found A Home At An Art Space On Prinsep Street