Italian cuisine tends to be slightly pricey, with a price range of around the twenties for a main dish. However, times are changing and it’s more readily available these days with many local cafes, restaurants and even food stalls serving up their own renditions of pizza and pasta.

Don’t get me wrong, I don’t mind it as long as the dishes are tasty. In addition, they are usually priced more affordable too. However, there is just something about Italian food that authentic restaurants serve up that makes all the difference.

Casa Roma is a personal favourite of mine which I find so underrated. Located at the Grandstand, this cosy restaurant is charming, for both couples and families alike. 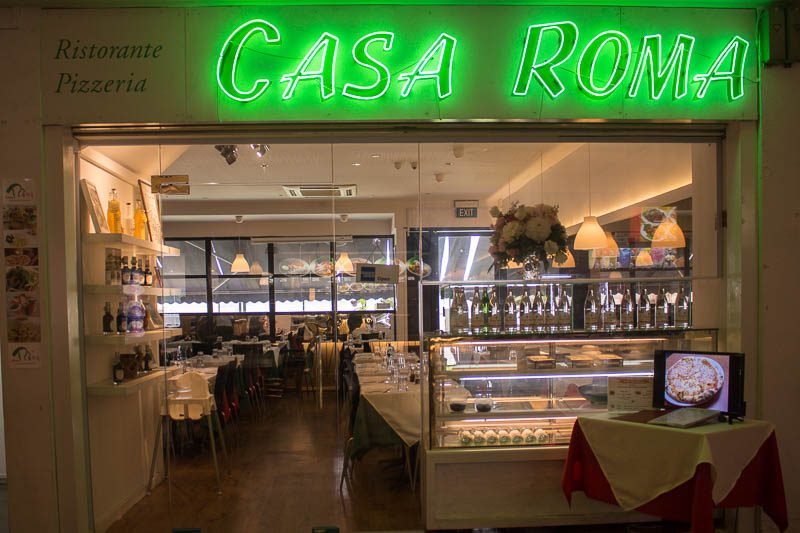 They used to be at Sixth Avenue till they shifted at the beginning of the year as their former premise was sold in an en bloc bid. However, they were optimistic about the change. Naflas, the manager who has been working for Casa Roma for the past eight years, shared with me how they still had most of their regulars returning for their food with greater human traffic now. 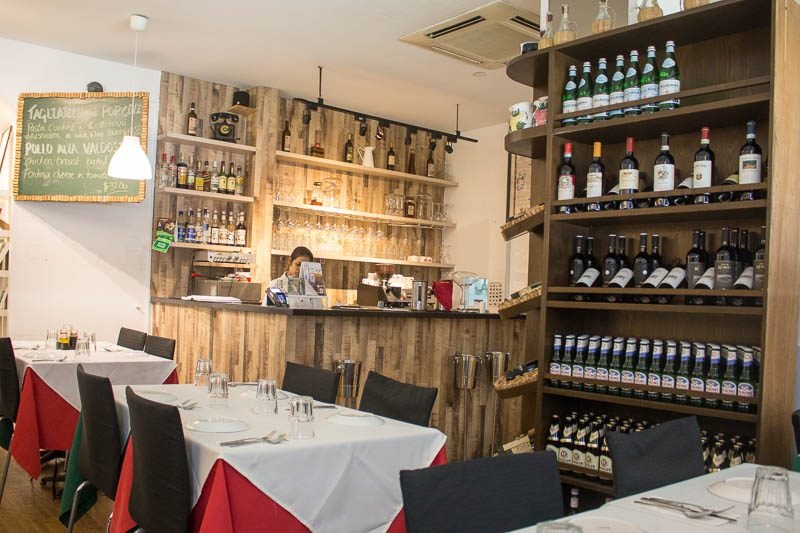 This family restaurant has been operating for over 20 years, now currently helmed by Chef Sharfaz who is the co-owner of Casa Roma. With experience in Germany and Italy for over a decade, he is very fluent in their languages as well. What adds to his commitment and dedication to his customers is the constant evolution of their menu.

He switches it up based on customers’ feedback with weekly specials. I liked how the restaurant was simply decorated but felt classy and comfortable. For alcohol lovers, you would be pleased to know that they have a lovely selection of Italian wines too. Although I’ve been here a couple of times for my personal preferences, I picked out the more popular items recommended by Chef Sharfaz to try out this time. The first dish I got was their Pizza Della Maestra (S$25), which was their special.

I love their pizza, with their Caprese Pizza (S$20) as my number one. I mean, liquid mozzarella with fresh tomatoes? I don’t know how it can get any better than that. 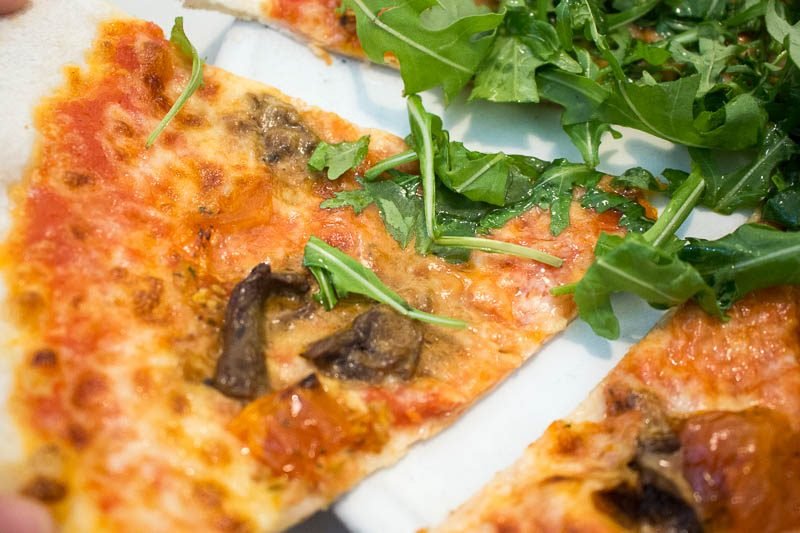 Portion-wise, their pizzas are pretty huge. If you’re a small eater, two can definitely share this and feel more than satisfied. It was so fragrant, I could smell it before it even arrived at our table. The pizza base itself had a delightfully chewy texture and was flavourful even on its own.

The crust is slightly thicker, and it gets thinner towards the middle, a sign of well-kneaded dough. While the crust is crisp with an airy and pillowy centre, you get more filling towards the tip of the slice. This prevents you from getting full or jelak easily.

The slight tangy tomato base for the ingredients wasn’t too overwhelming, which allowed the semi sun-dried tomatoes to really stand out. Instead of being fully dried and tart which is what I’m used to, these were plump and supple. They packed a punch of herby flavour with a hint of sweetness. 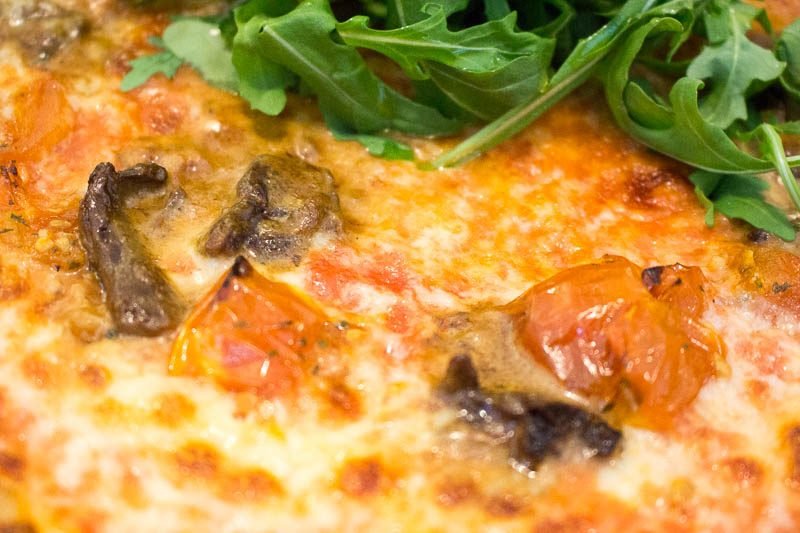 The porcini mushrooms’ natural juices soaked into the pizza, creating a deep earthy aroma. I liked how they had a meaty texture for a nice bite, with its intense woody and nutty undertones. It elevated the taste of the pizza by creating more dimensions to the flavour profile.

The mozzarella melted perfectly into the pizza, with a subtle milky and savoury flavour. It was mild, providing a soft and stringy texture to bind all the flavours together. In addition, the generous garnish of rucola on top gave a kick of freshness with its peppery and spicy flavour. It may be too strong for some, but I liked how it helped to cut through the bold flavours of all the other components. 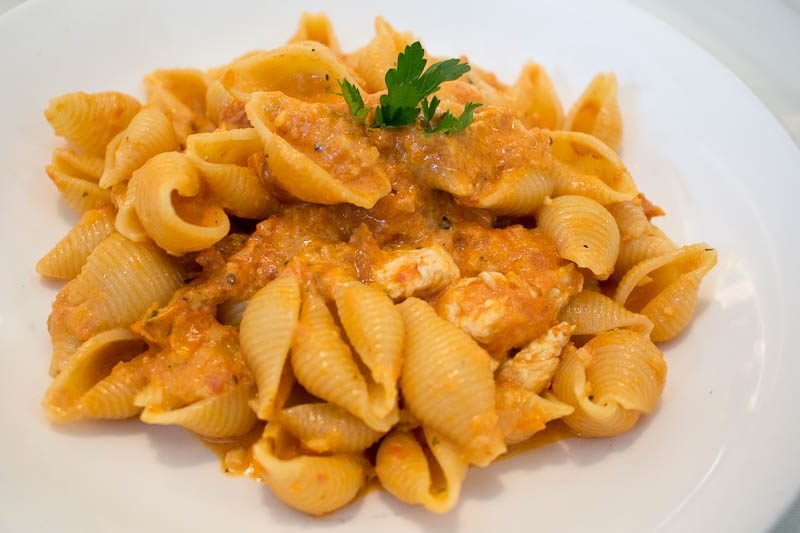 The second dish we got was their Conchiglie Con Pollo E Pomodorini Secchi (S$23). My fellow comrades would know I’m definitely a pizza-over-pasta person. Pasta just never seemed to impress me, but my dining companions who I’ve been to Casa Roma with have always raved about how good they were. When it arrived, it looked very ordinary to me and I didn’t expect much. Hence, I was blown away by how tasty it actually was. The creamy tomato sauce was a perfect ratio of each component, tangy and rich at the same time. It was so appetising and I found myself going for mouthful after mouthful.

I liked how the pasta shells were al dente, which held the sauce well. As the sauce got trapped within, every bite was an addictive flavour bite. I was exceptionally elated whenever I got a chunk of tomatoes for an added burst of sweetness. 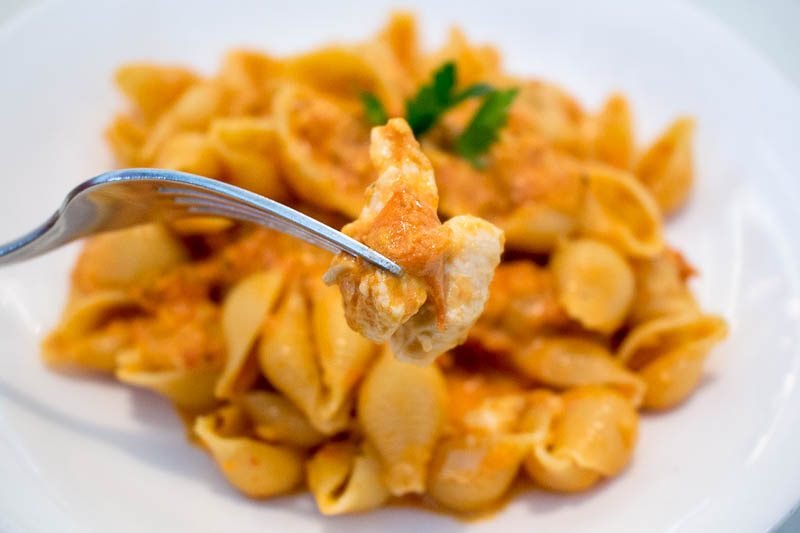 The chicken pieces within were run-of-the-mill, to be honest. But I appreciated that they were lean yet tender, which added a nice protein source to the dish. It gave the dish more texture too as they needed more bite as compared to the shells. It really impressed me, coming from a pasta sceptic. 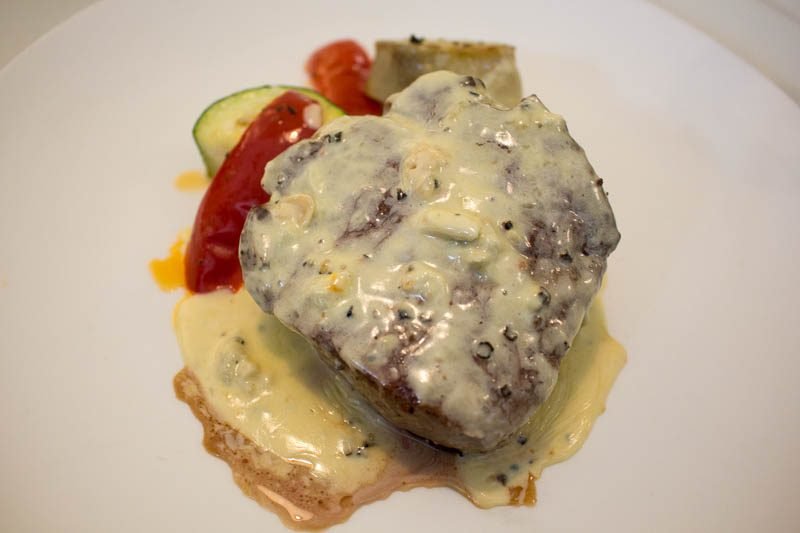 The last main we got was the Filletto Di Manzo Al Gorgonzola (S$38.50). I have never had their meats before and was pretty excited to try them out. 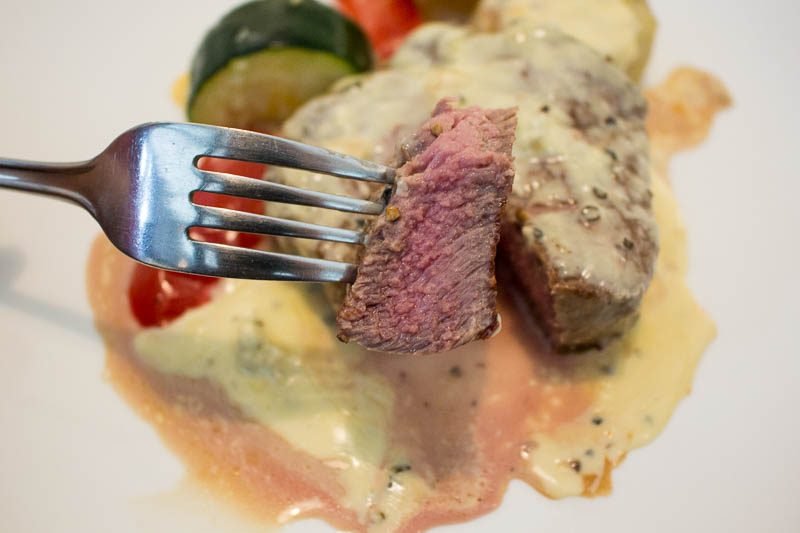 For a thick slab of 12o-day tenderloin steak, it was extremely worth the money. Their default doneness is medium unless requested otherwise, so I went with that. Slicing it apart, it looked promising with it being mostly brown, but a light streak of pink in the middle.

Unfortunately, it was a tad too dry and tough for my liking. It took some jaw work and was not very evenly seasoned although I appreciated how there was no gaminess. 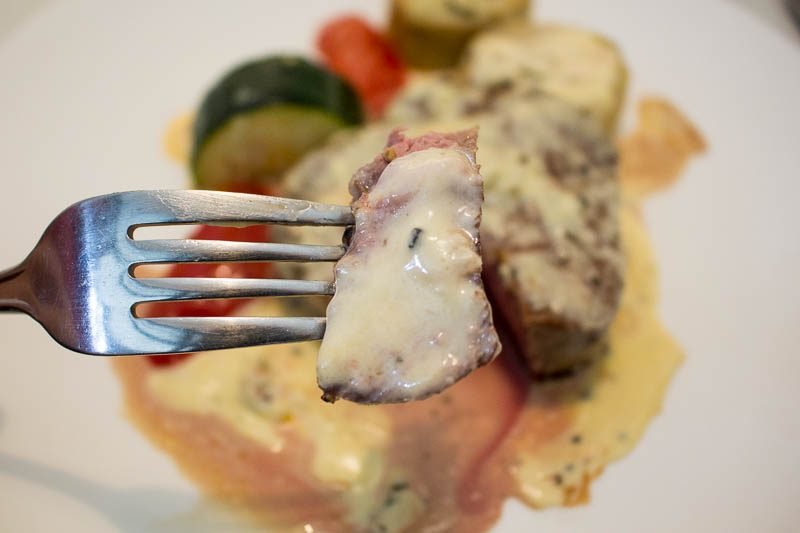 The saving grace was the gorgonzola cheese sauce. I loved how rich and creamy it was, which enhanced the taste of the steak. The robust flavours added a touch of needed savouriness and depth to the dish. 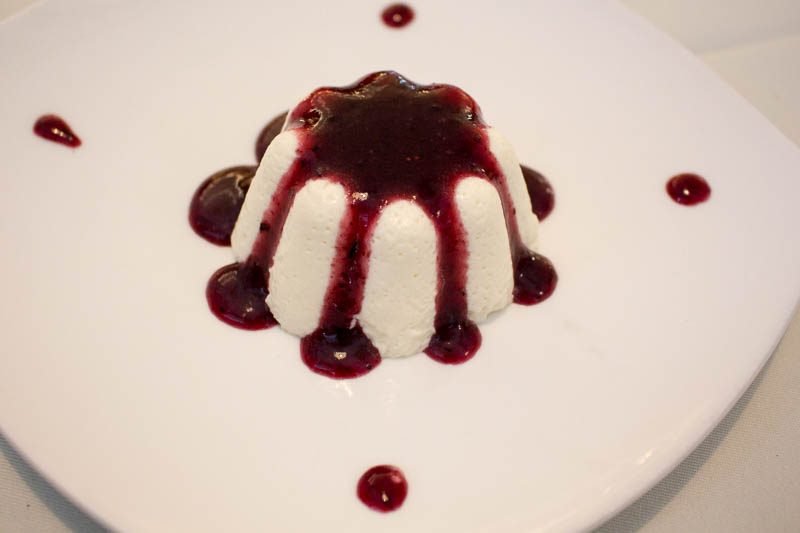 To round up our meal, we got the Panna Cotta With Mixed Berry Sauce (S$9). All their desserts are made from scratch as well, and I was hoping this would alleviate some of the disappointment from the steak. 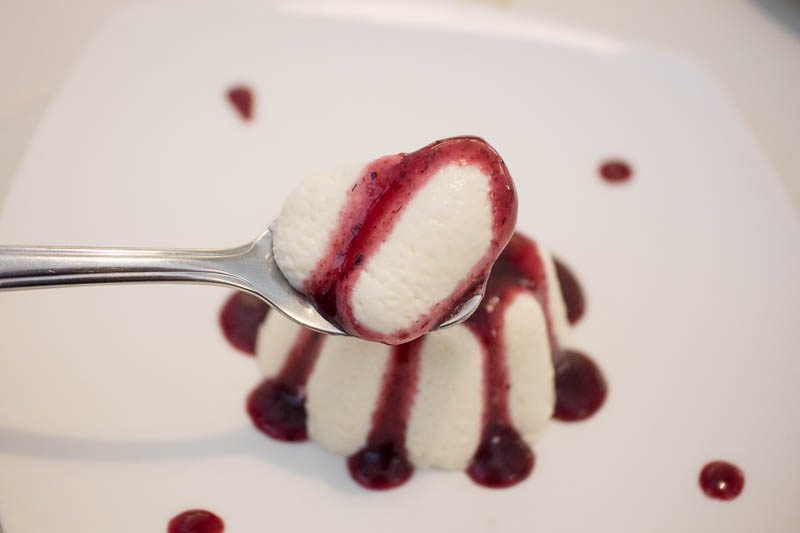 Indeed, it did not let me down. The Panna Cotta itself was so luxuriously smooth and light, yet still maintained the rich taste of the heavy cream. It was drizzled generously with the mixed berry sauce, which was a good balance of sweet and tart. Not only did it provide a pop of flavour but added a refreshing note to cleanse the palate. This luscious dessert is so simple but very well-executed.

Casa Roma has never failed me with their pizza. I must say I am thoroughly impressed with their pasta too. They may have just converted me to get try out more of their offerings in the future. While the steak was subpar, hopefully, it was just a one-off experience on my end.

Whatever it is, I am still able to attest to the deliciousness of their pizza, pasta and even dessert. If you are having a celebration or just decide splurge and treat yourself, give Casa Roma a try! I promise you will not be disappointed.