I’ve got to hand it to sumo wrestlers – not just because of their in-ring skills, but also how much these colossal warriors can eat. You might have heard about their secret weapon when it comes to achieving such giga-sized proportions, chanko nabe.

Essentially a Japanese hotpot filled to the brim with meat, vegetables, and other carb-heavy ingredients, chanko nabe is a staple of most sumo wrestlers when they want to bulk up quickly. But you don’t need to visit a Tokyo dojo to have a taste of this tradition; just head to the hidden Chanko Nada in Orchard Plaza. 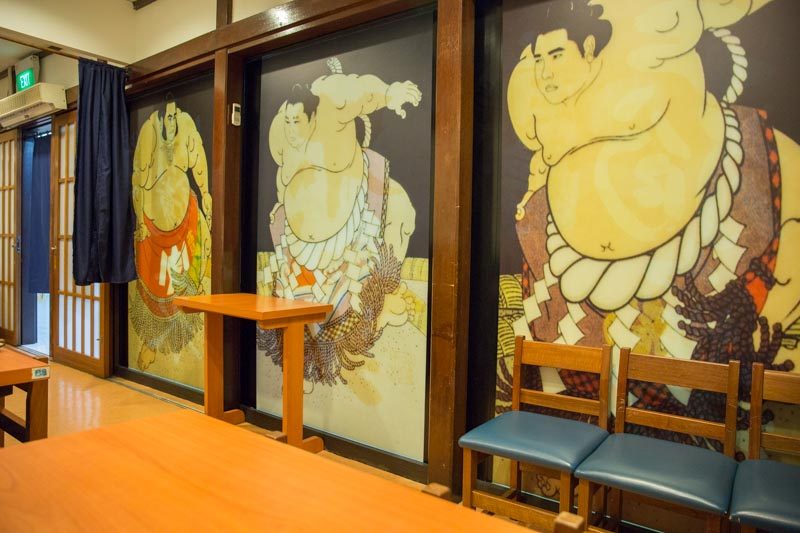 Cloistered within the somewhat ‘seedy’ mall that lies on the fringes of Orchard, Chanko Nada is often patronised by – from what the staff told me – groups of Japanese businessmen and women for their drunken nights out. Sounded authentic enough to me. For the past nine years, Chanko Nada has been serving chanko nabe as its speciality, helmed by a chef who used to be in the Japanese sumo industry himself; pictures of him refereeing matches line the walls. As such, the recipe you get here is tried and tested, and there’s even a variety of chanko nabes that you can choose from.

Do take note that the prices are portioned per person, and each chanko nabe is a portion for two, so remember to do the math. That said, as I eventually found out, each chanko nabe can easily feed a hungry party of three. 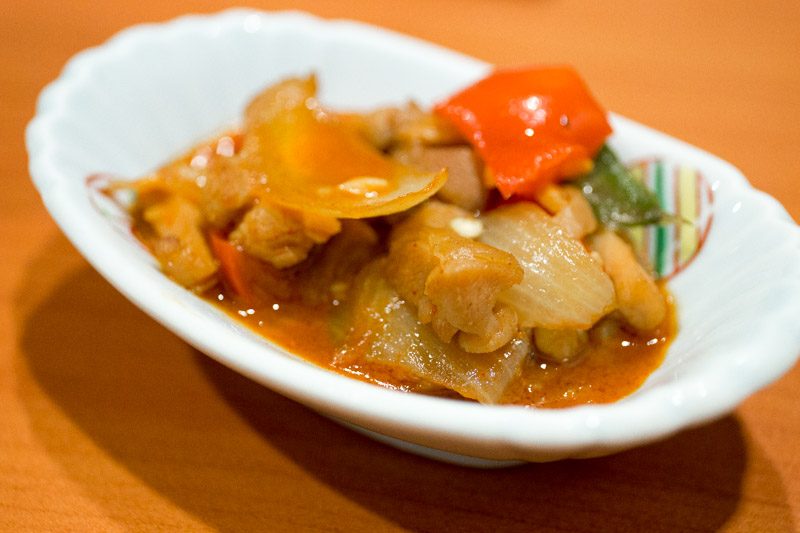 Chanko Nada first serves patrons with Otoshi ($5), an appetiser of diced, simmered chicken with onions, green and red peppers, and a sweet-spicy sauce. Served at room temperature, this was generous yet light; after all, you’ll need the space for what’s to come.

I ordered the Nada Special Shoyu Chanko ($45), and boy, what a bounty it was. 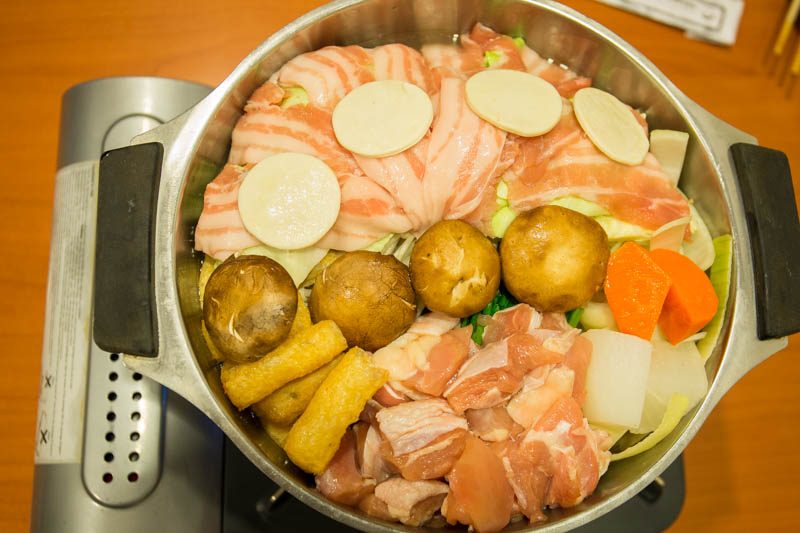 Our jaws dropped when this hit the table – a mini mountain of Kagoshima pork, chicken, carrots, cabbage, fried beancurd, mushrooms, onions, bean sprouts, rice cakes, konnyaku, and radish in a pot of clear soup. It took about 10 minutes for this sumo-friendly meal to arrive, and the staff are more than happy to cook it for you. 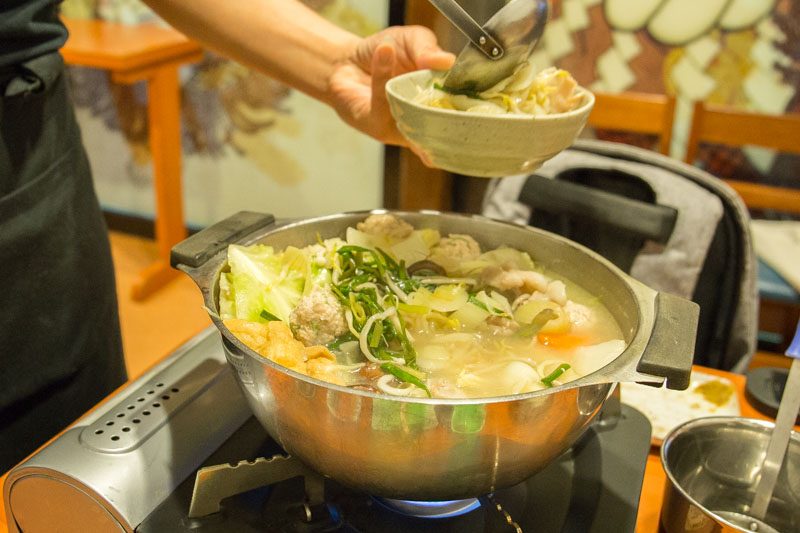 As you would with most hotpots, you can start digging in once the soup starts to boil. With each scoop, you’re bound to pick up loads of ingredients, to the point where it’s likely you won’t even see your soup. 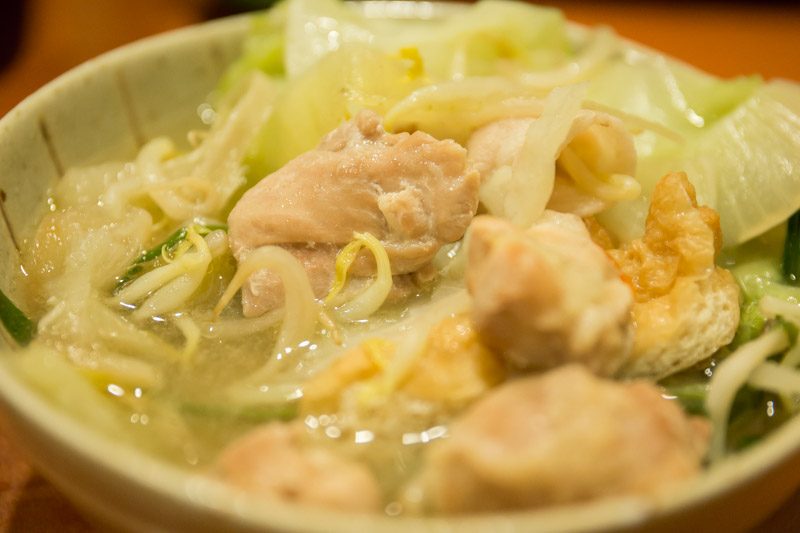 At one point, it almost seemed like the supply of meat wouldn’t end. While the Kagoshima pork was positively stringy with visible streaks of fat, I much preferred the tender chunks of chicken that remained firm and not tough even after a long period of cooking. Also part of the chanko nabe is a serving of chicken meatballs, which is brought out separately so that it doesn’t break up in the soup. Likewise, the staff will cook this for you, which doesn’t take very long at all. 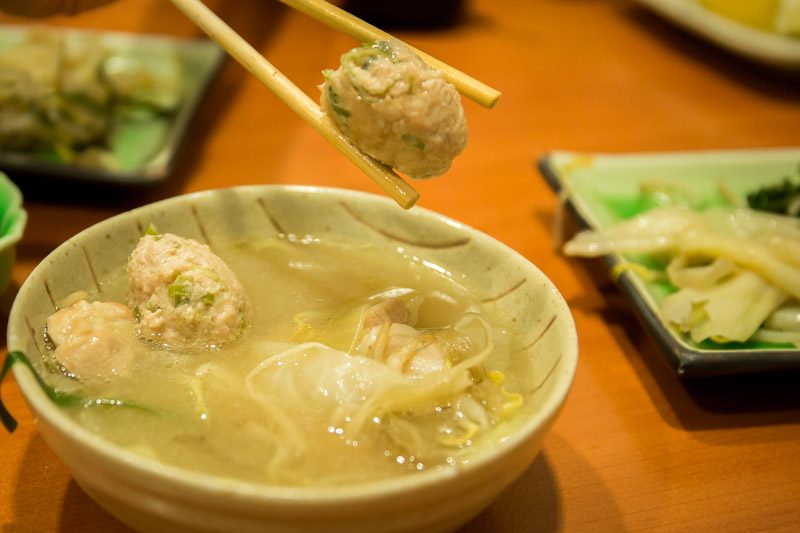 Once cooked, I found that the meatballs were soft without being crumbly, and packed loads of flavour as they were stuffed with spring onions and other vegetables. 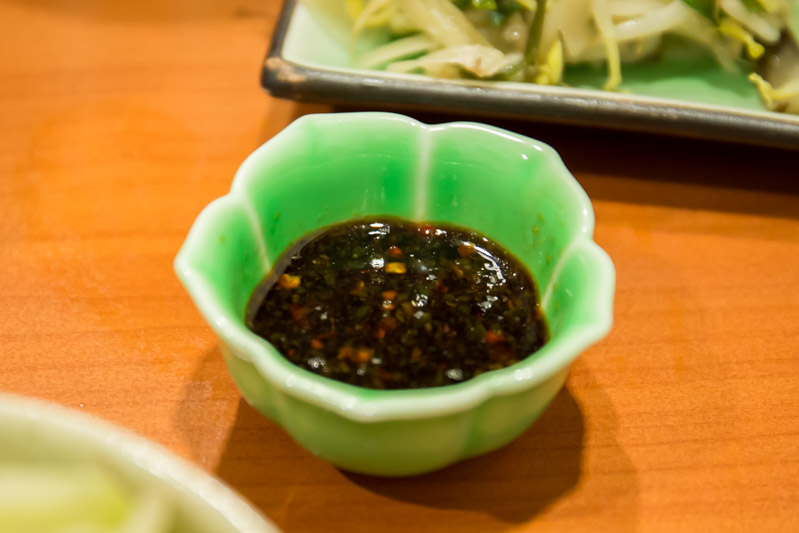 If you’re looking for a dipping sauce for the meats, I’d recommend using Chanko Nada’s very own in-house chilli – mixed with green chilli, red chilli, and yuzu skin – and adding soy sauce to it. The resulting combination is one that’s savoury, tangy, and with just the right amount of heat. 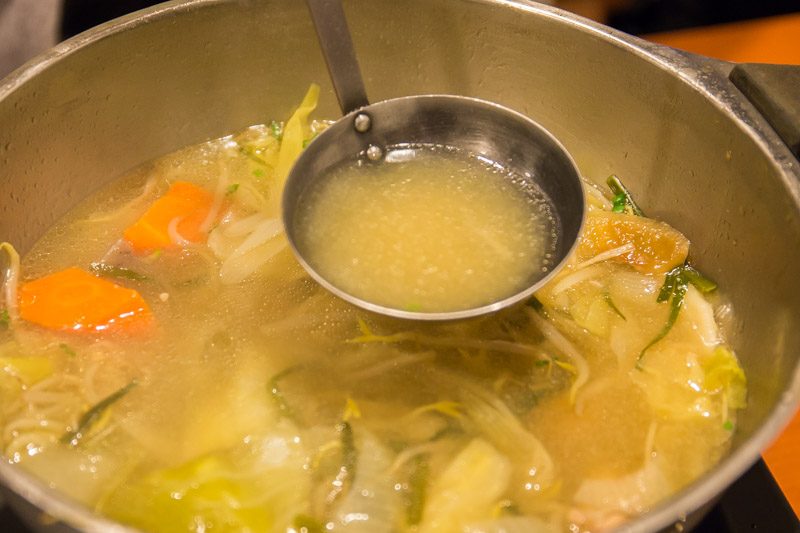 I’m very much a soup guy, so I couldn’t resist guzzling down this broth. I could easily taste the sweetness from the carrots and cabbage, the earthiness from the mushrooms, and the slight milkiness from the pork fat.

Needless to say, this got tastier as the soup got more concentrated. 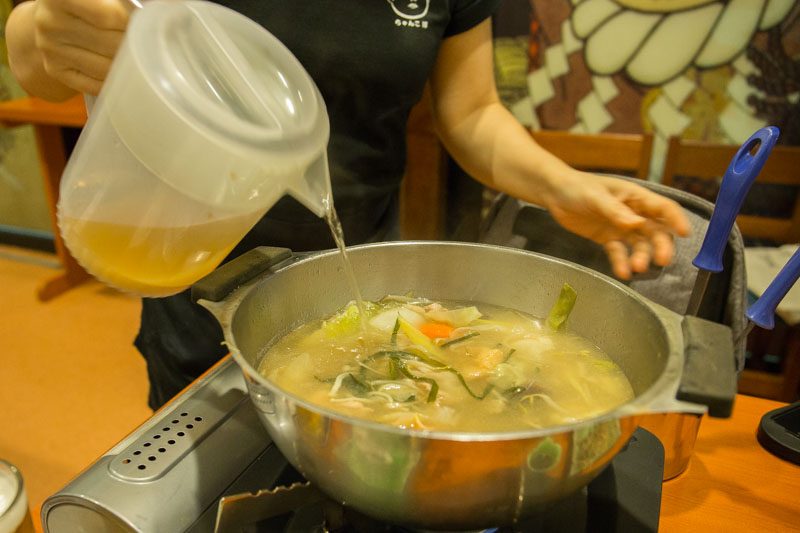 Best part? It’s free-flow soup here, so ask for seconds… or thirds… or as much as you can drink! 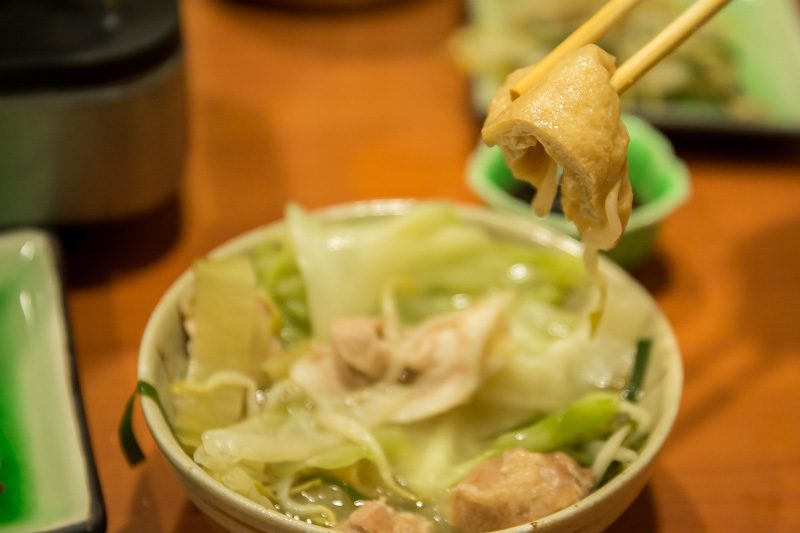 Chances are, you’ll be full after your third bowl, as most of the ingredients – the veggies and fried beancurd especially – are highly absorbent, so you’ll get plenty of juices and soup with each bite. But if somehow, your belly’s not bursting yet at this point, you can top up with a side of Ramen ($7) that you’re encouraged to cook in the chanko nabe. 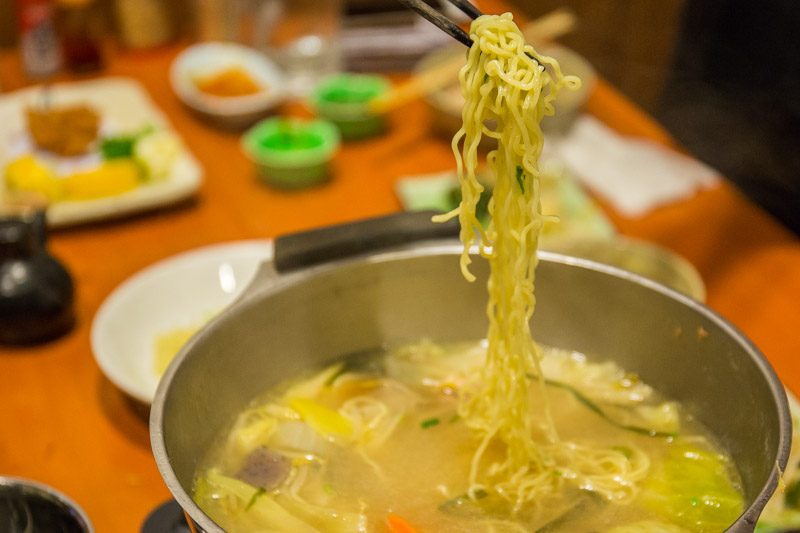 I don’t need to tell you how comforting ramen is. Cooked ’til firm without being soggy, and having absorbed all that deliciously rich soup, this was worth every slurp.

Chanko nabe aside, Chanko Nada actually serves a wide assortment of items on its menu, similar to what you might find in an izakaya – I spotted everything from Tempura Soba ($15) and Grilled Gyu Tongue ($15), to Ika Mentaiko ($18) and Salmon Sashimi ($18). 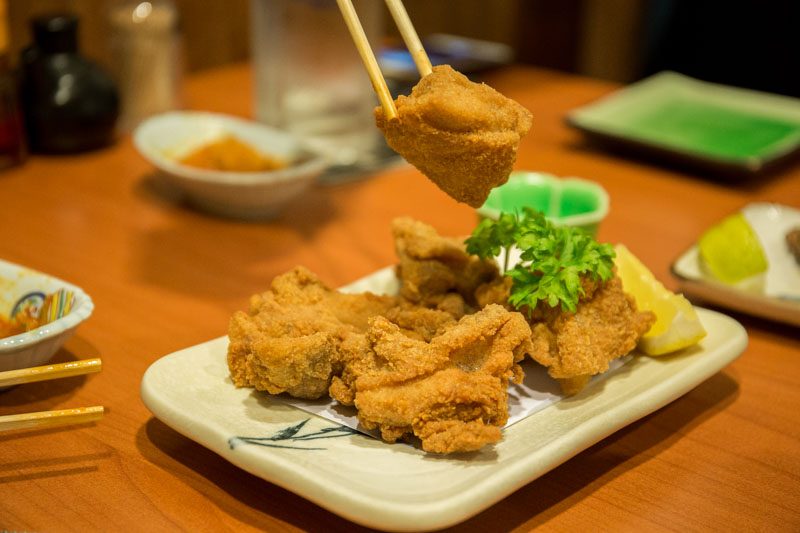 Instead, I couldn’t resist the Tori Karaage ($8). This rendition was not too oily and didn’t have a coat of excessive batter. Drizzle lemon juice on top of this, and you have a fried chicken dish that’s perfect with a beer. 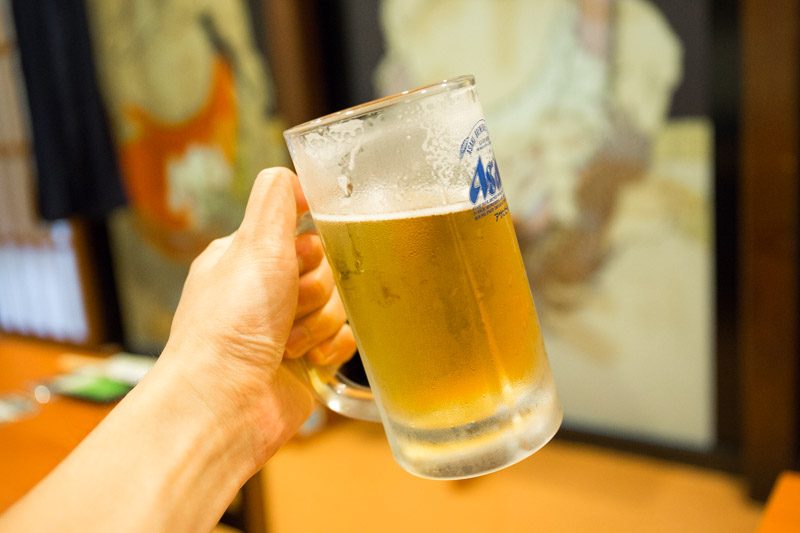 By the way, a mug of Asahi goes for $9 each, as I happily found out (kanpai!). I also mustered the stomach space to order three kushiyaki – the Chicken Gizzard ($3), Chicken Heart ($3) and Chicken Liver ($3). Neither the gizzard nor heart possessed an excessively gamey taste. I particularly enjoyed the heart which was chewy and springy without any leathery texture. 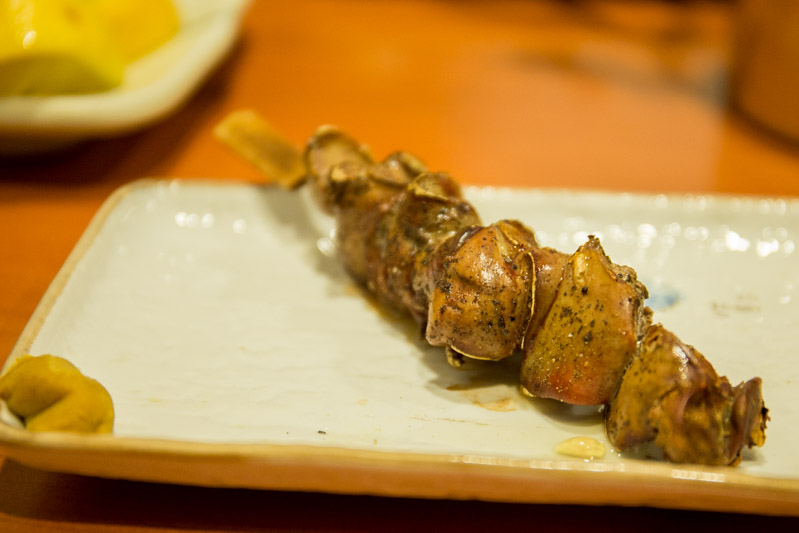 The standout skewer in my book? The liver, which excelled in more than just the gamey flavour that I was craving, but its creamy texture on the inside.

How I managed to move from my table after this gargantuan meal remains a mystery to me; even more baffling, how sumo wrestlers are able to eat this on a daily basis. I guess you won’t be seeing me in the ring anytime soon, but you will find me again at Chanko Nada.