Coney Donut is now open at the newest Triple One Mall just opposite of 313 Somerset. They serve up savoury and sweet creations revolving around their cone-shaped doughnut which is homemade daily. These grab-and-go cones like the Egg Cone (S$4.80) take the fuss out of breakfast and it is something that you can eat while on the move! It’s filled with a generous portion of scrambled egg that is cooked to order.

The scrambled egg was light and airy and was topped with a piece of bacon that was crispy. The smokiness of the bacon seeped through the slightly peppery scrambled eggs. 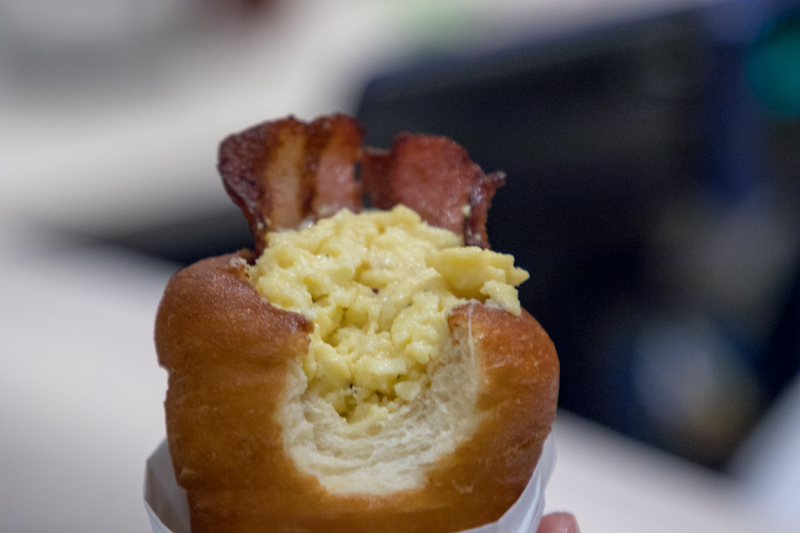 The doughnut was airy and has a subtle caramelised sweetness that complemented the savoury fillings. I really love the concept of the Egg Cone (S$4.80) as it was a more convenient version of a scrambled egg croissant. They also offer a Tuna Cone (S$4.80) if you would prefer creamier and more robust flavours. 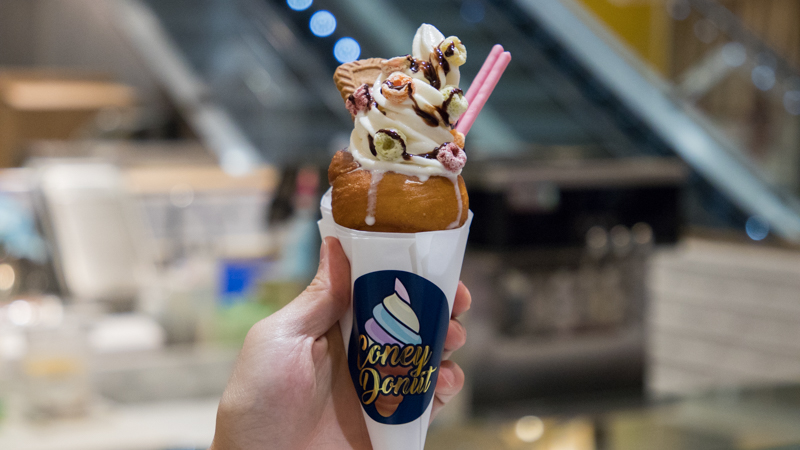 For sweets, I tried the Soft Serve Donut (S$6.80) where I could choose two toppings out of the plethora of different treats. As the ice cream was homemade (sans stabilisers), it melted really quickly. However, the airiness of the cone worked as a sponge to soak up the melted ice cream. I also liked how they coated the inner walls of the cone with chocolate sauce as it provided a bitter surprise for me as I went further down the cone. The ice cream was not as creamy as I’d hoped, as it had an icy consistency almost like a sorbet.

As a result of that, the vanilla flavours were mild and I could only taste the sweetness as opposed to the aromatic vanilla scent infused into the ice cream.

However, I like the play on temperature with the combination of the warm cone and icy cold ice cream. This dessert reminded me of the street side ice cream vendor that sells a rectangular block of ice cream in a bun.

All in all, I really love this concept of having everything in a cone made of doughnut. The doughnut has a subtle caramelised sweetness that didn’t overpower the fillings and on top of that, it acted as a sponge absorbing whatever that it holds. In addition, it is extremely convenient to grab one on-the-go.

Do-nut go looking elsewhere for doughnuts, this un-cone-ventional one is must-try.