Curry Times: Have A Tongue-Tingling Time With A Mala Feast Of Mala Chicken Nasi Lemak, Mala Chap Chye & Many More Till March 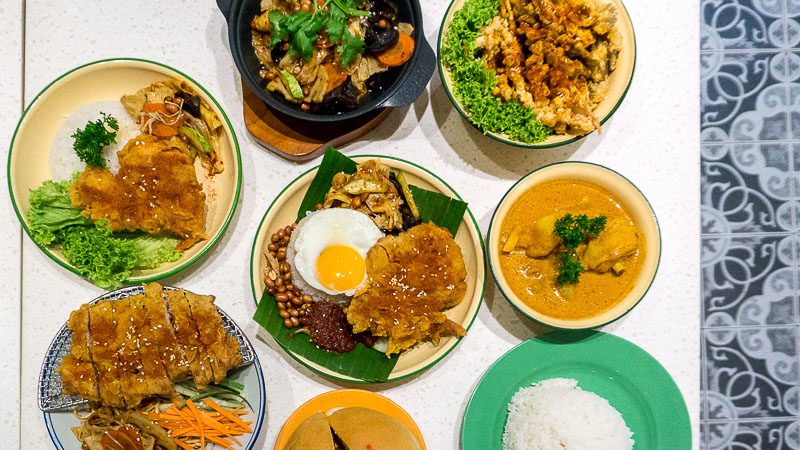 Trust Old Chang Kee as the home-grown brand that you can always rely on for hot snacks all day. Well, things just got hotter, as the brand, along with its affiliated brands—Curry Times, Coffee House, Bun Times, Dip N Go, and O’My Kampong—will be rolling out a Mala Feast over the next three months (till March 2020), as part of its Chinese New Year celebration! 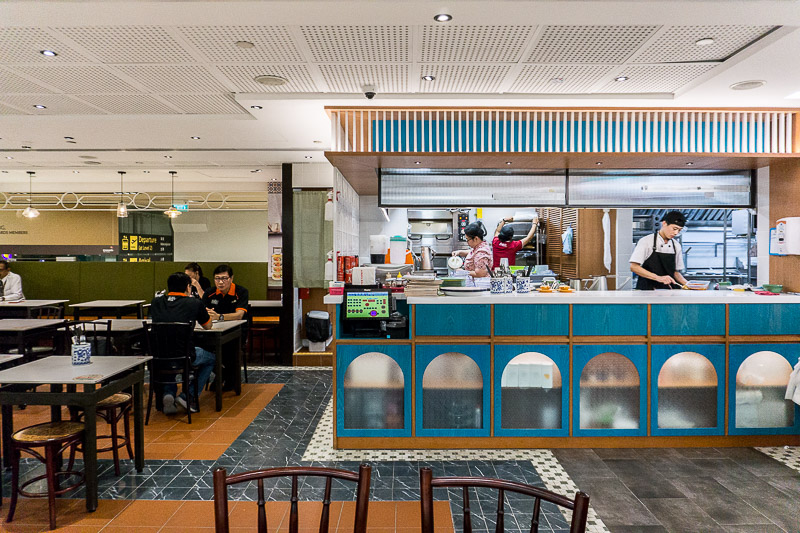 As a brand that started with a puff—a curry puff, I mean—it’s become synonymous with comforting and homely recipes that have seen diners, both new and regular patrons, returning to have a taste of the familiar hearty flavours. In fact, all diners are handed a complimentary homemade cookie upon leaving! 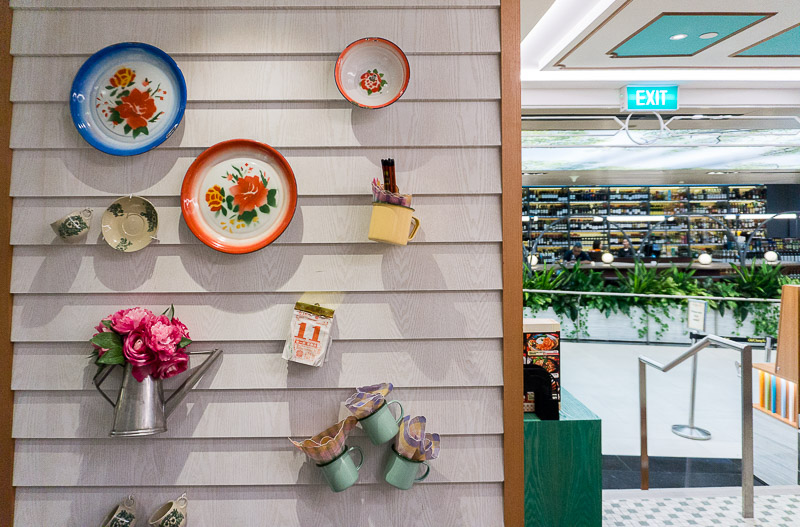 What makes Curry Times stand out is its emphasis on nostalgia and uses crockery that harks to the old days of enamel plates, and even have wait staff donning samfoo uniforms.

There will be various products launched over the three-month period, with their Mala Chicken’O (S$2 per piece) already available at Old Chang Kee outlets island-wide now. But what awaits you from January to March is a whole slew of tantalising mala dishes that’ll get your tastebuds tingling! At Curry Times, have a taste of Mala Chicken With Noodles (S$8.90), a hearty portion of fiery noodles with a crisp and spicy Mala Chicken cutlet, and a side of mala chap chye. 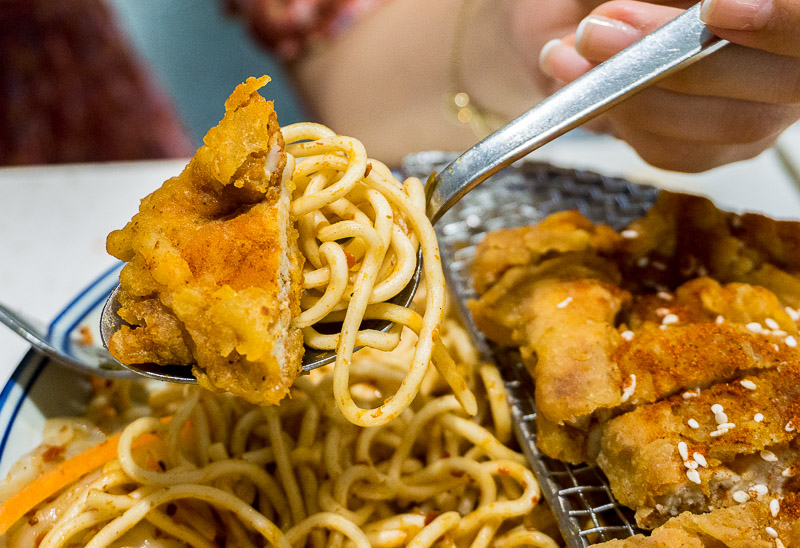 Be sure to enjoy this while it’s still hot from the kitchen, as you’ll want to savour the contrasting crunch of the chicken cutlet and the smooth, springy texture of the noodles. Every strand was coated in pepper and spices, making every mouthful toothsome and delightful.

If you’re wondering how spicy it was, I would say it wasn’t enough to make me break into a sweat. 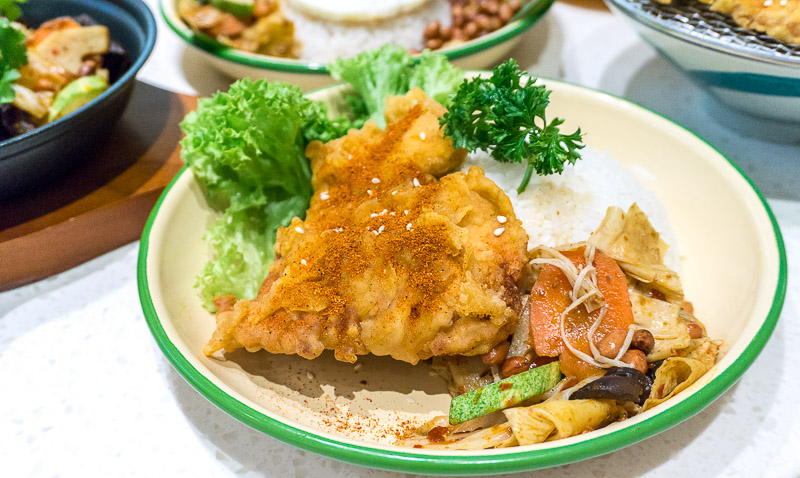 Prefer rice instead? There’s also Mala Chicken With Rice (S$8.90), a simple yet satisfying meal that comes with a hunk of spicy Mala Chicken Cutlet and mala chap chye. The biggest drawback to this dish was the lack of gravy, so it may prove to be rather dry for some diners.

However, mixing in the mala chap chye into the rice does alleviate this issue slightly, although not completely. Also, I was thankful for my chicken cutlet being satisfactorily juicy that day. 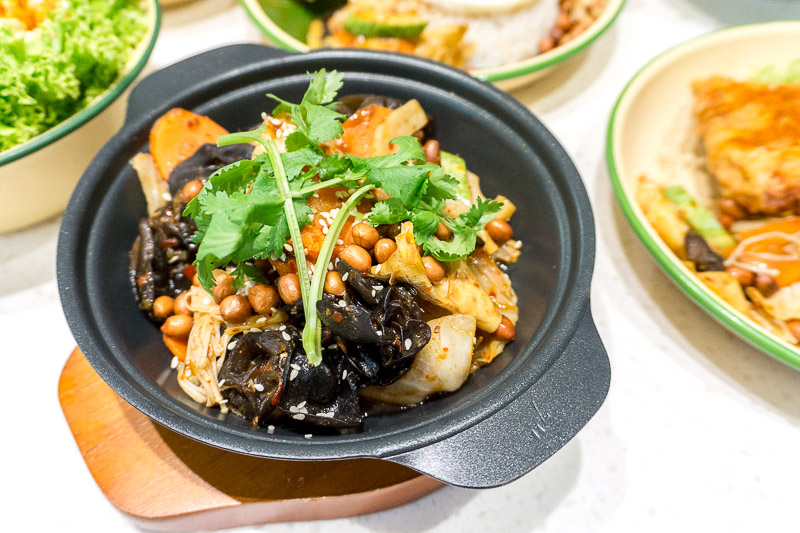 You can even order the Mala Chap Chye (S$7.90) by itself, as a side dish, to accompany other mains from Curry Times’ a la carte menu. I thoroughly enjoyed how the vegetables retained their crunch, and even the mushrooms weren’t a soggy mess. I could detect more spiciness here, as there were no carbs to hinder me from experiencing the full effect of the mala spices.

At this juncture, I was starting to feel some numbness on my tongue. However, as spice levels go, it was still tolerable for someone like me who can withstand a decent amount of chilli in my food. 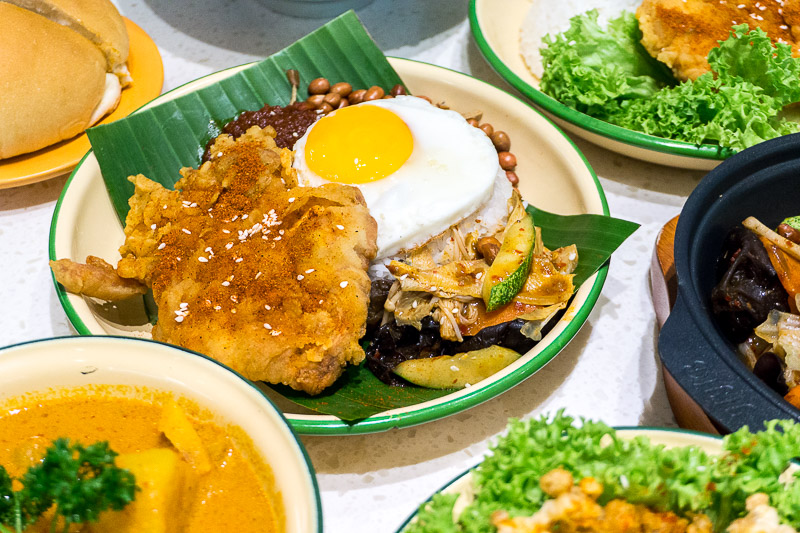 My favourite of the afternoon had to be the Mala Chicken Nasi Lemak (S$9.90). At less than S$10 for a fulfilling meal, I would gladly return and order this again for lunch or dinner! 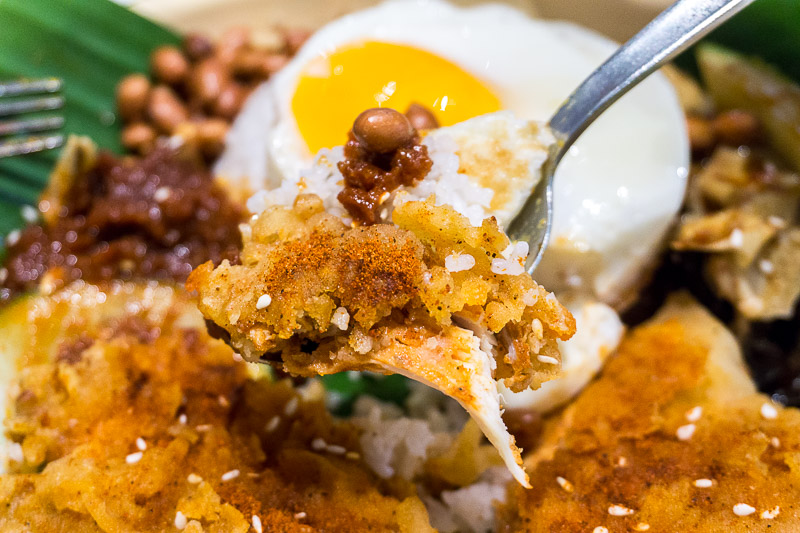 I like how I could add a smidge of sambal to every spoonful if I felt like the mala spices weren’t tickling my throat enough. I also enjoyed the medley of textures and flavours on one plate, presented in a traditional Malay dish.

I relished in it so much that I ordered a take-away portion for my fiancé’s dinner—and he lapped every morsel up as well.

When you’re on-the-go and aren’t looking to their curry puffs to keep you satiated, they also offer Mala Chicken Bun (S$1.80 per piece). The filling for these fluffy buns are the same as those in the Mala Chicken’O at Old Chang Kee, however, the spice level for this is a lot more prominent.

It was packed full of minced chicken filling mixed in with fiery mala spices, bamboo shoots, peanuts, and onions.

I assume the use of the pastry quells the spiciness quite drastically, while here, white bread can’t seem to do much to water down the impact of the spices. As a result, I could feel my cheeks burning and beads of sweat forming along my hairline. 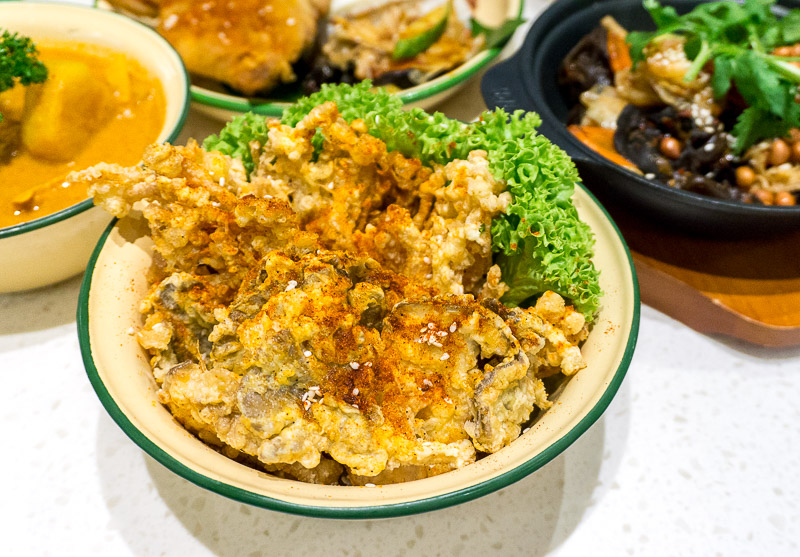 Mushroom lovers can rejoice, as their Mala Assorted Mushroom (S$6.90) was an addictive snack just waiting to be polished off! Best eaten fresh out of the fryer, the variety of mushrooms ranged from enoki, to king oyster, to oyster mushrooms, and all were submerged in tempura batter before being deep-fried. 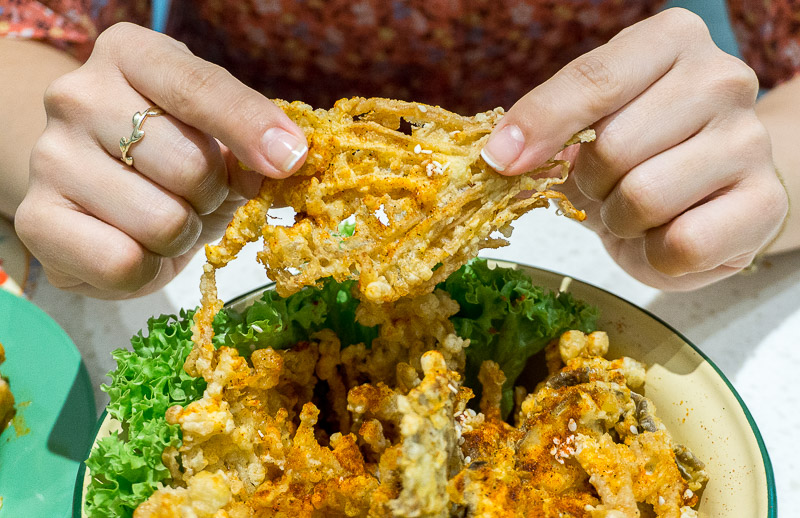 My top pick was the deep-fried enoki mushrooms as they were especially crispy, given that each mushroom strand was delicately coated in tempura batter, before being peppered with mala spices.

The best part of the Mala Feast is the complimentary glass of homemade Chrysanthemum Tea (worth S$2.30), with every order of mala rice or noodle dish at all Curry Times outlets! 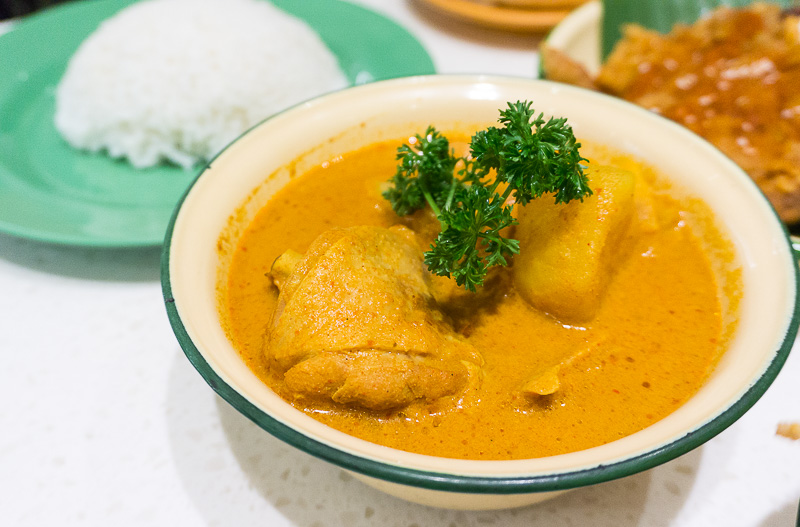 How can one not be tempted to order Curry Times’s Signature Curry Chicken (S$8.50 for an individual portion, S$14.90 for two to three pax)? Each individual portion comes with a choice of either a plate of rice, a loaf of bread, a piece of prata, or a bowl of noodles. 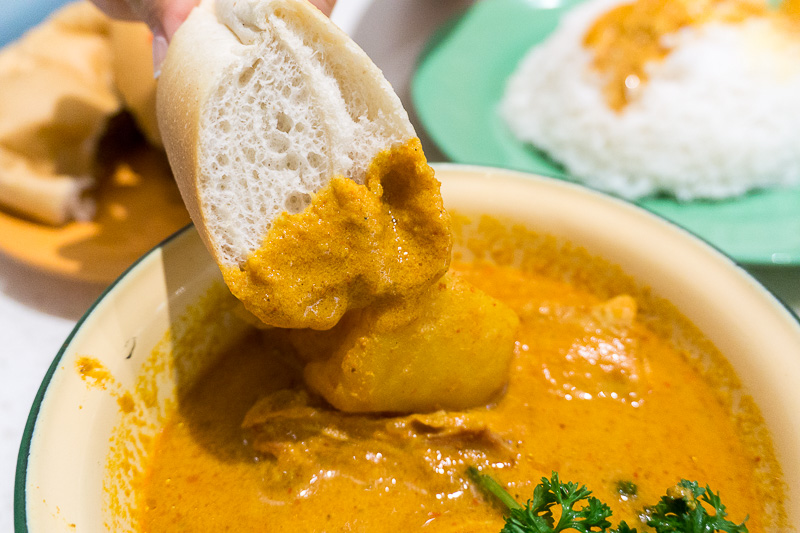 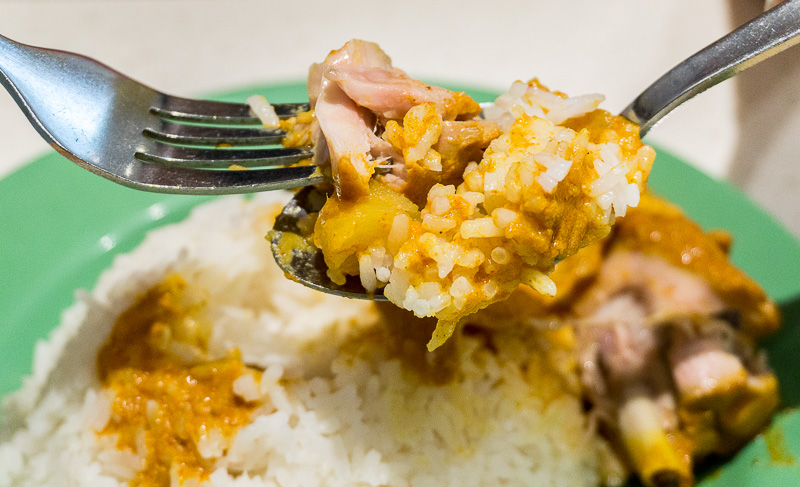 It’s made healthier with zero coconut milk added and uses fresh succulent chicken, with all the same and familiar taste of a good ol’ comforting bowl of chicken curry. The chicken thigh meat was impressively tender; I could pull the flesh away from the bone simply by using a fork.

The curry was rich, viscous, and good enough to drink on its own. Curry Times’ Mala Feast will run till March 2020, so if I were you, I’d make my way down—grab a few friends while you’re at it—and put your tastebuds to the test. Which mala dish will win your vote?

*This post was brought to you in partnership with Curry Times.