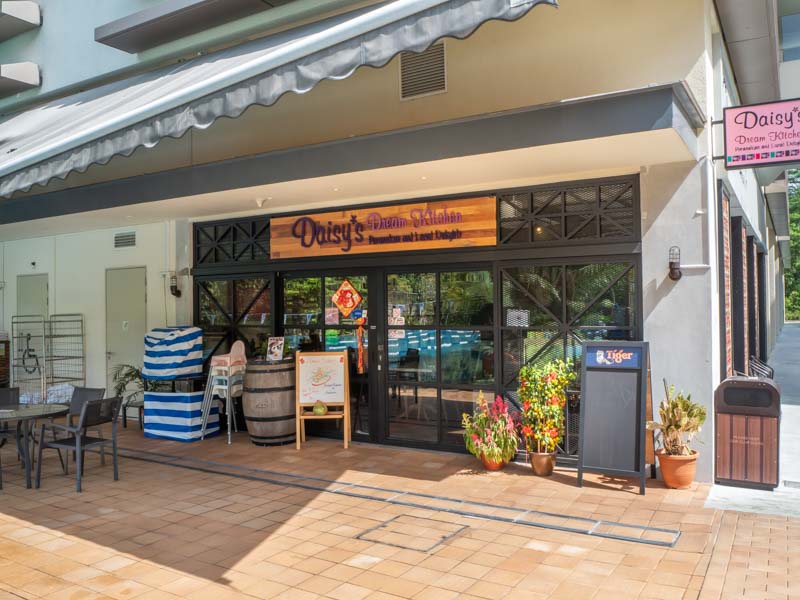 When food is part of one’s history, culture, and upbringing, then I wouldn’t expect anything less than a Michelin-star quality meal. Daisy’s Dream Kitchen located at Temasek Club does not own any stars, but their Peranakan food won over my heart and soul. 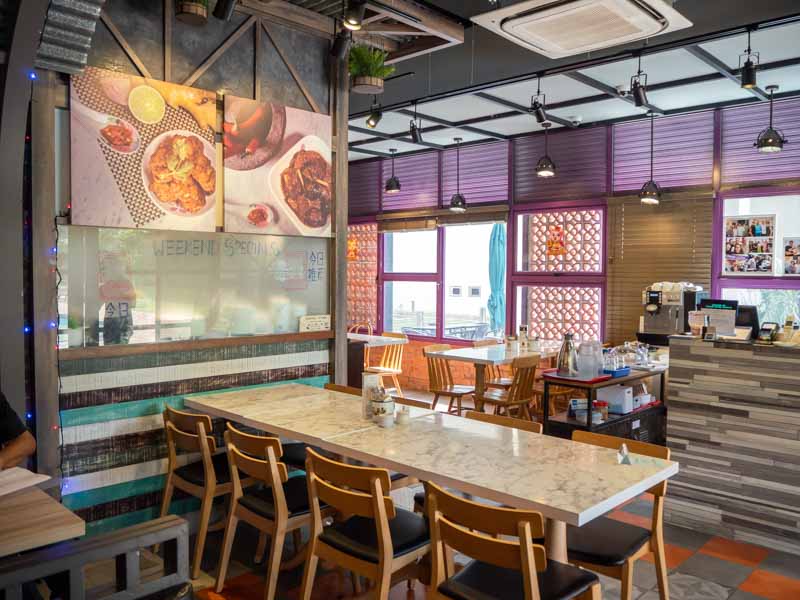 The traditional yet modern interior was inviting; the corrugated roof decor, the wooden fixtures and the marble tables all blended well together, giving off a homely vibe. 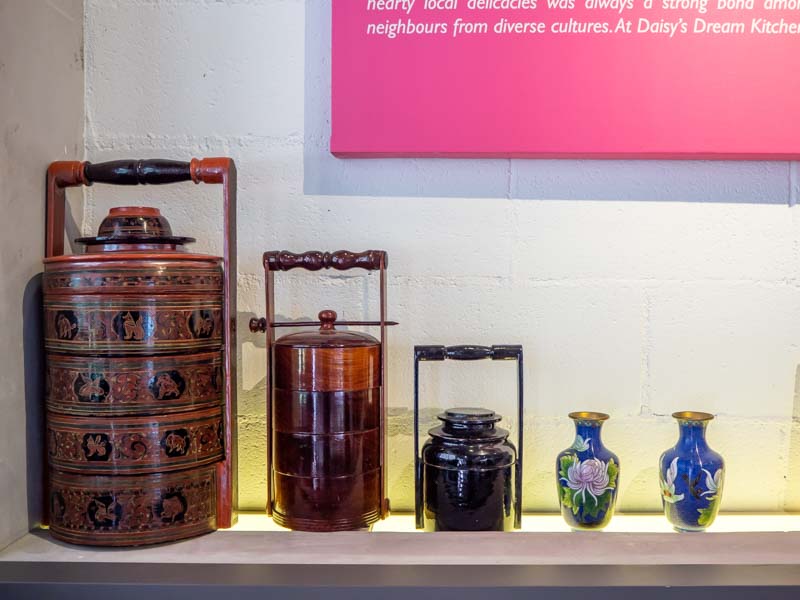 The brightly-lit eatery even features a corner where the history of the restaurant is narrated on the wall, alongside nostalgic artefacts of Peranakan culture. I spotted an interesting photo before I sat down to eat – the cast of Crazy Rich Asians visited this very restaurant! And guess what? Selena Tan, one of the actresses in the show, is the sister of Roy Tan, the owner of Daisy’s Dream Kitchen.

He stepped out of the kitchen shortly after I arrived to explain a bit more about the eatery’s history.

Daisy, Roy’s mother, had always dreamed of opening her own eatery. She was having breakfast at Tiong Bahru Market eight years ago when she stumbled upon a vacant stall for rent and at age 60, her dream came true.

Since then, Daisy’s Dream Kitchen has been selling authentic Peranakan dishes to customers at affordable prices.

Moving three times in the process did not affect their business in the slightest. They moved from Tiong Bahru Market in April 2011 to February 2012, then to West Coast from December 2011 to April 2018, and now to their new restaurant at Temasek Club.

In fact, the moves have attracted more customers and the secret to their success lies in the food. 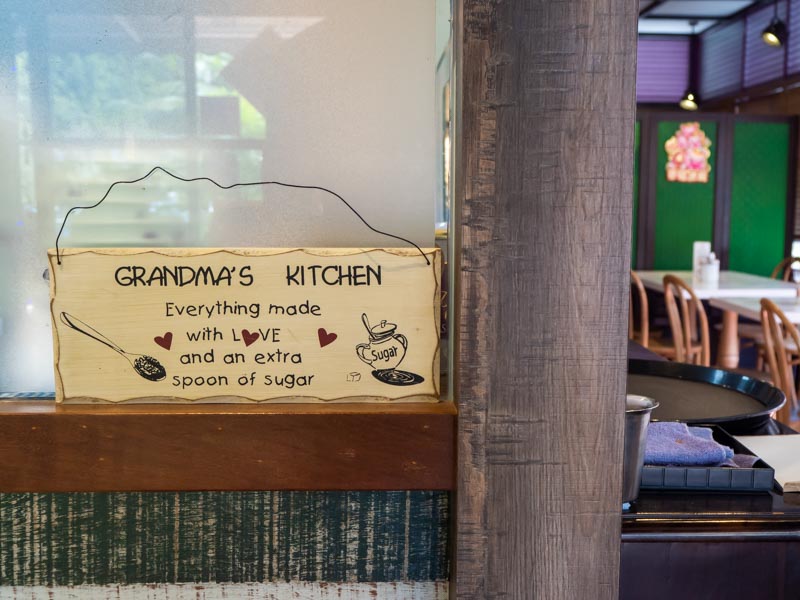 Food is a huge part of Peranakan culture. When attending a Peranakan family reunion, it isn’t uncommon to see a sea of dishes laid on the dining table.

Over a meal, relationships are formed, bonds are strengthened, and memories are created. The recipes that brought the Tan family together have been handed down for the past two generations; from Roy’s grandmother to Daisy, Roy’s mother, and now to Roy himself.

All the dishes featured on the menu, from achar to buah keluak, originated from this humble lady, Roy’s grandmother. Of course, the ingredients have been altered slightly to appeal to the modern palate. A seemingly simple dish, the Babi Buah Keluak (S$18.80) takes over a week to prepare. Buah keluak, if not prepared properly, may lead to detrimental health issues.

After all, unprocessed buah keluak contains cyanide, a toxic ingredient found in explosives. A week-long process of soaking, washing, and processing will eventually produce a palatable and delectable dish. 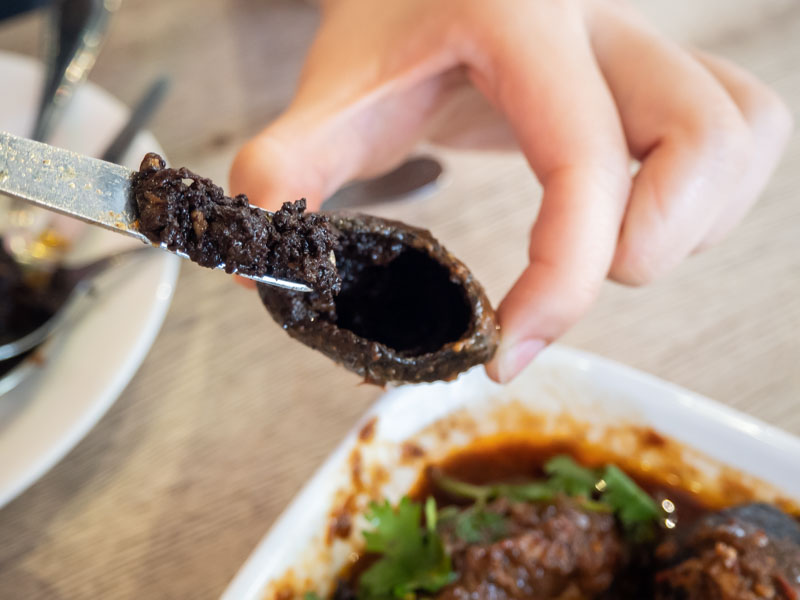 I found that the Buah Keluak had quite an acquired taste; you’ll either like it or you’ll hate it.

The slightly nutty and earthy taste with a hint of olives really appealed to me. I paired it with the spice-loaded gravy which really complemented the earthiness of the nut. 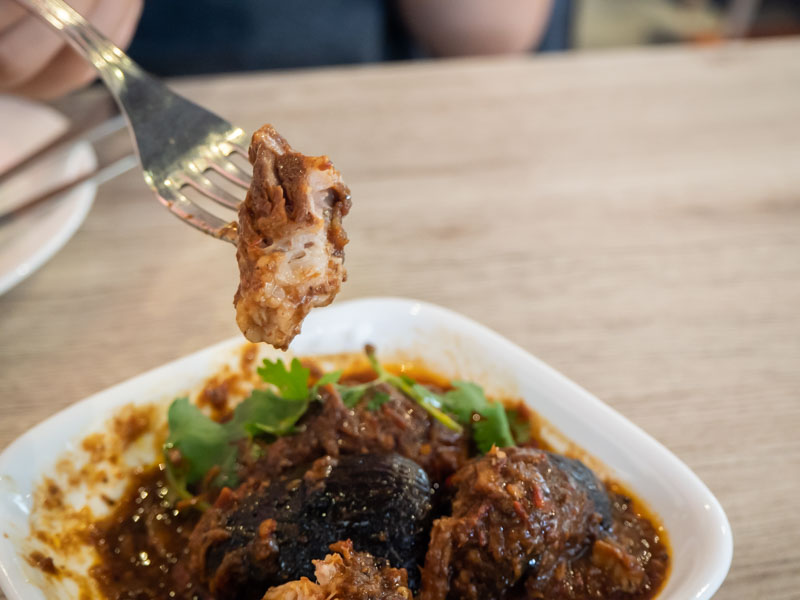 The pork from the Babi Buah Keluak was near-perfect, with the meat and fats melting in my mouth. The pork was mildly tangy due to the gravy and it sat really well with me. 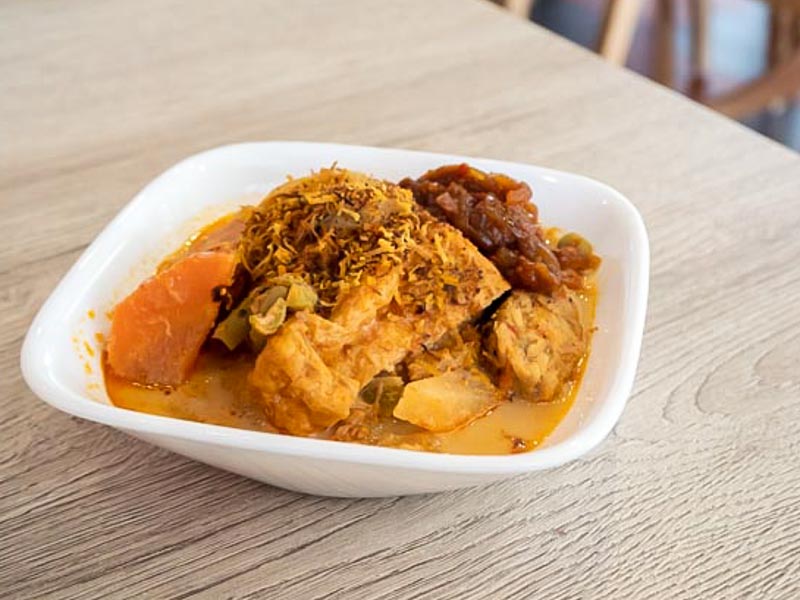 Sayur Lodeh (S$12.80), a dish containing carrots, radish, long beans, cabbage, and tau pok, was another dish that I really loved as it sparked memories of my grandma’s cooking. 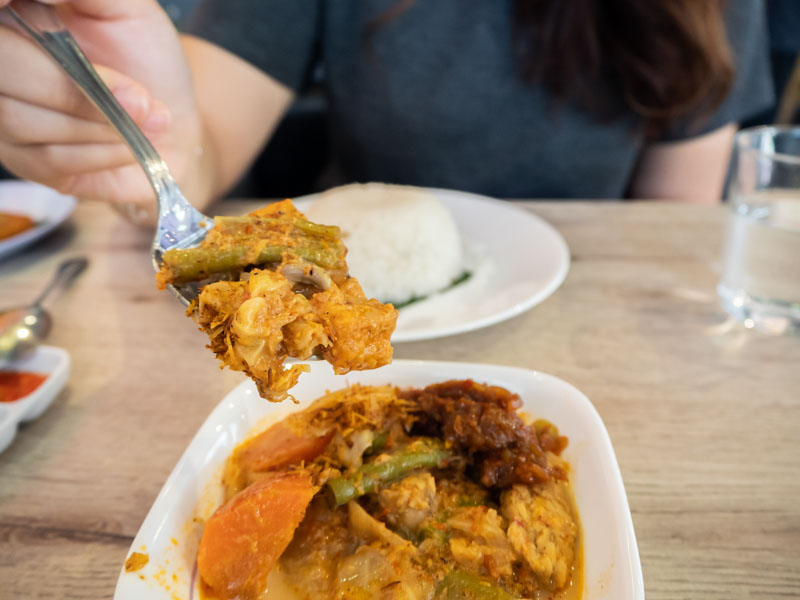 The gentle spicy tingle on my tongue did not mask the curry gravy which had a wonderful coconut aroma. The gravy had a gritty texture which I didn’t mind, but those who prefer a smoother consistency, take note before going for this dish. This was a dish that I found really interesting. The Black Ink Sotong (S$15.20) looked daunting but tasted heavenly. 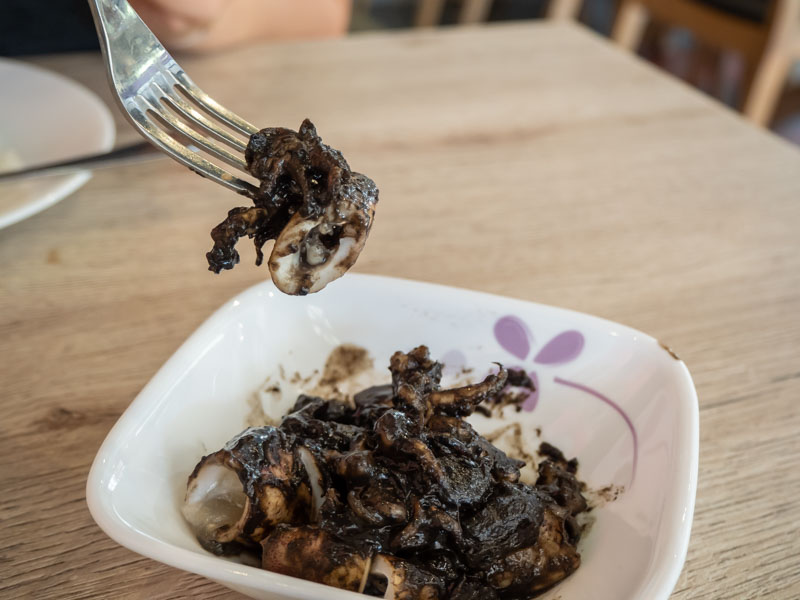 Daisy’s Dream Kitchen uses real squid ink to prepare this dish. A barbecue flavour was apparent from the moment I placed a piece of squid in my mouth. This was rather surprising because I was expecting the usual seafood taste, which ended up being quite mild.

The sotong was slightly crunchy and fresh, and I expected nothing less given the eatery’s aim to provide quality food. 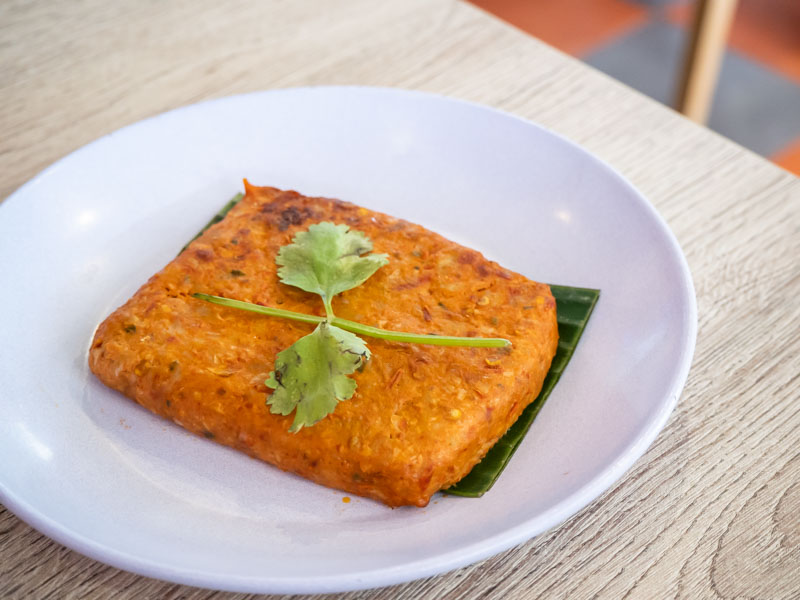 I will never forget the Otah (S$6.80) as it was probably one of the best I’ve ever eaten. While it looked dry on the outside, as soon as I cut into it, it was a whole different story altogether. 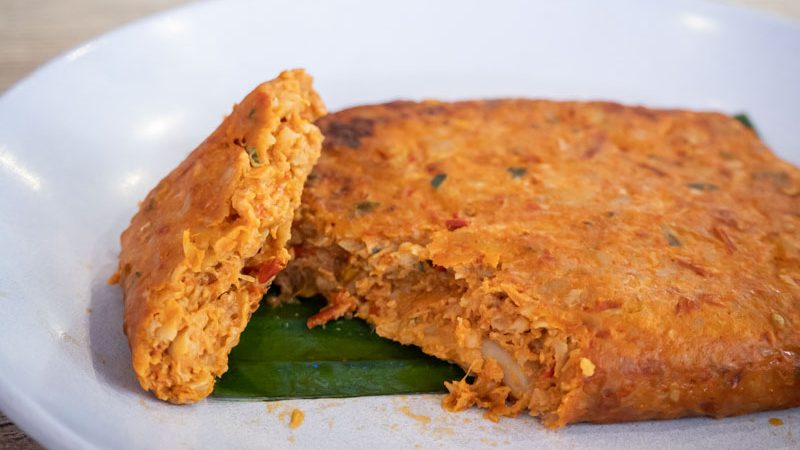 The moist centre had big chunks of fish which tasted fresh, and there was no fishiness whatsoever. Another good thing was that it wasn’t that spicy, meaning nothing overwhelmed all the flavours that were working so well together. 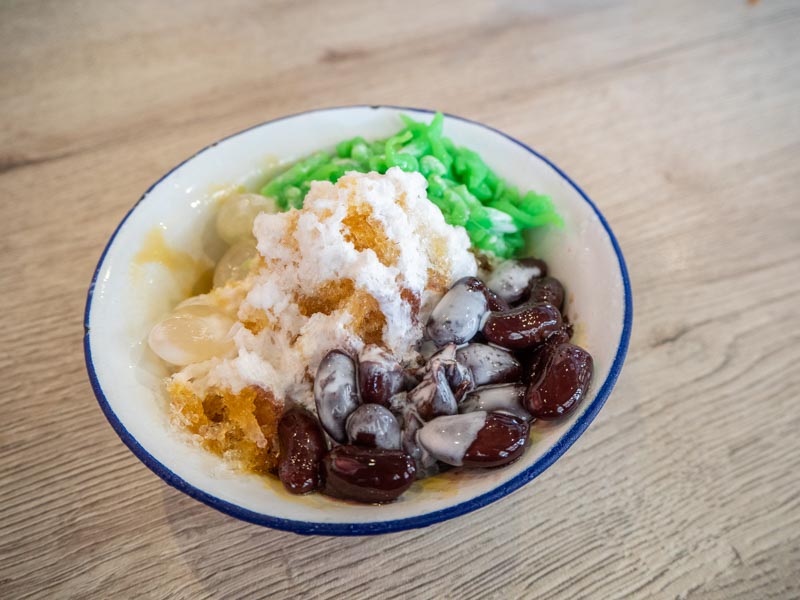 The Chendol with Attap Chee (S$4.80) had a generous portion of gula melaka, drizzled with a layer of coconut milk. The usual condiments such as kidney beans, green jelly, and attap chee sat neatly around the edge of the bowl.

While desserts are meant to be sweet, I was surprised and relieved that the Chendol wasn’t as sweet as expected. That being said, the flavour of the Chendol was not compromised.

The familiar gula melaka-infused shaved ice was a refreshing treat that cleansed my palate after a hearty meal. 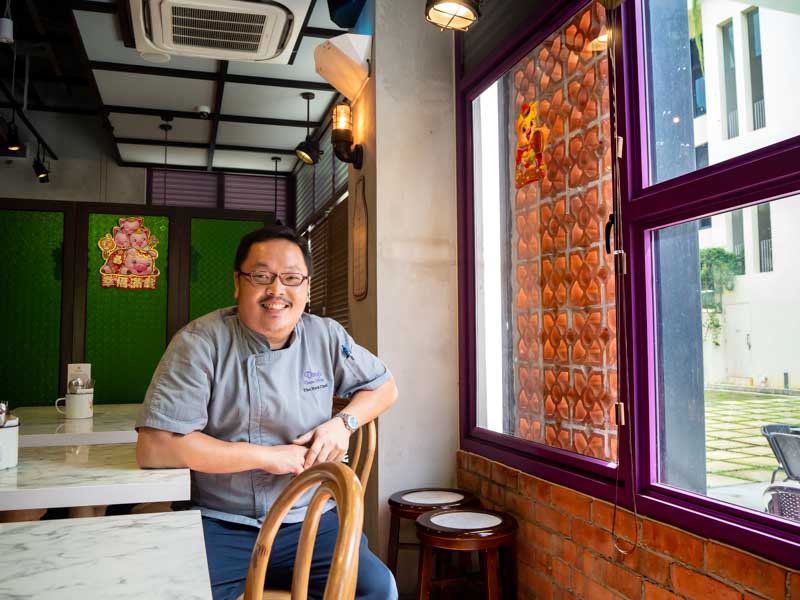 Peranakan cuisine isn’t usually the first thing on my mind when I’m thinking of where and what to eat for lunch or dinner. After this meal, that might very well change. I was humbled by the dedication of this Peranakan restaurant owner to preserve his culture’s food.

I asked Roy one last question before I left, “If you could describe Daisy’s Dream Kitchen in one sentence, what would it be?” His response?