10 Forgotten Dialect Restaurants in Singapore For a Taste of History

Being a melting pot of various ethnicities and cultures, Singapore portrays a scene of cultural diversity that features the distinctive traditions of different cultural roots. In general, the Chinese in Singapore are grouped according to their dialect groups, which can be defined as their respective ancestral homes in China.

Most of the younger generation Singaporeans have lost touch with our dialect roots, as we do not speak them, and neither do we converse much in them with our grandparents. Needless to say, we’re eating a lot more western dishes rather than traditional dialect dishes of our ancestors.

To revitalise the awareness of our dialect group and traditional foods amongst youths in Singapore, I have researched and come up with a list of forgotten-and-now-retrieved dialect restaurants in Singapore.

Here is a list of some of Singapore’s forgotten dialect restaurants:

For traditional Cantonese dishes, the flavours are well balanced and not too oily. Apart from that, spices are used in moderate amounts to avoid overwhelming the flavours of the primary fresh ingredients. Dining here ignites a sense of nostalgia. Wing Seong Fatty’s is the sort of old-school restaurants which our grandparents went to in their younger years.

Not considered a high-end restaurant, their cuisine is considered to be that of high-end zhi char, which is distinctive in its own way. Definitely a genre of food which many of us can relate well to. 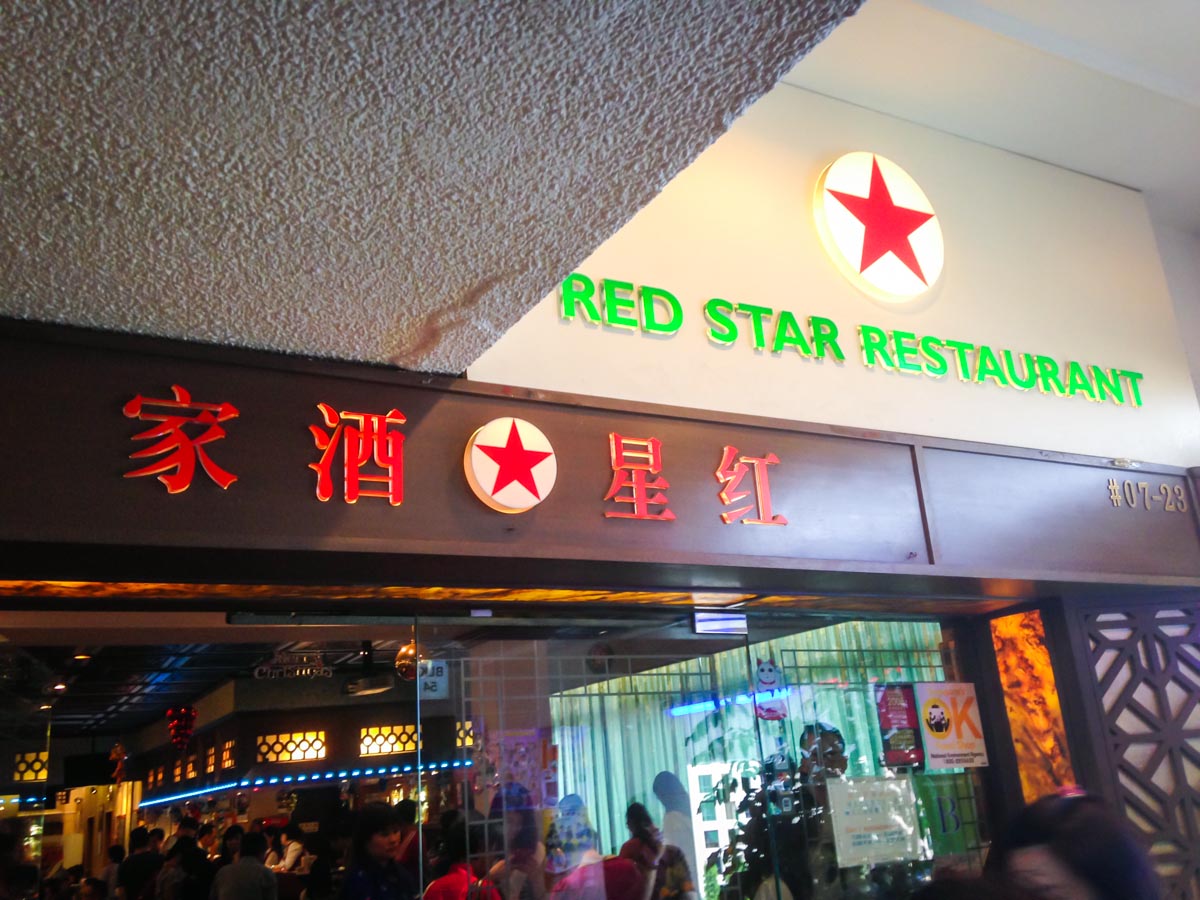 Red Star restaurant is probably the most authentic, classic looking Chinese restaurant left in Singapore. It practically looks like you’ve stepped back in time to the 1970s.

Masterchefs Sin Leong, and Hooi Kok Wai, two of the remaining members of the multi-award winning Four Heavenly Kings of Cantonese Cuisine and disciples of Chef Luo Chen at The Cathay Restaurant in the 50s, continue this legacy. Showcasing every subtlety of authentic Cantonese cuisine, the dim sum here is captivates the hearts of those looking out for old-school, traditional dim sum as well as Cantonese roast meats.

The classic sense of nostalgia here is something you cannot find anywhere else in Singapore. Most of us have probably dined here with our parents or even grandparents in the past, and the kind of memories and feelings Red Star brings back is priceless.

Teochew cuisine is known for its seafood and vegetarian dishes and is commonly regarded as a healthier option. Oil is often not used in large quantities and this delicate cuisine uses mostly poaching, braising and steaming techniques without too much heavy flavouring. 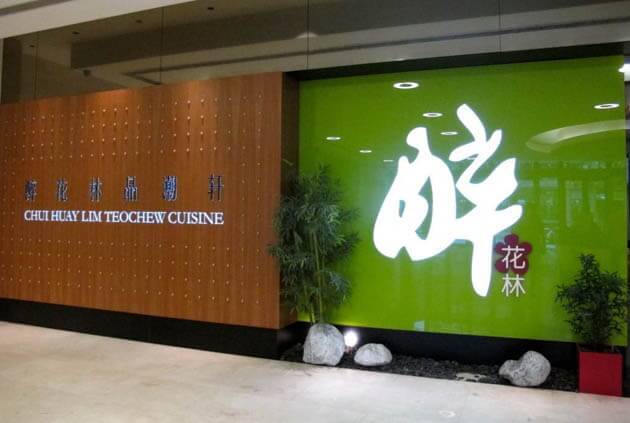 At Chui Huay Lim, be transported back to a nostalgic past with the use of fresh ingredients which is the hallmark of Teochew cooking. These include the traditional Teochew Cold Crab, Deep-Fried Traditional Teochew Liver Rolls and the Teochew-Styled Steamed White Promfret.

Very much a family-friendly restaurant, Huat Kee prides itself as the most authentic Teochew restaurant in Singapore beginning all the way back in 1969. This traditional and cordial restaurant has become a household name. Hokkien/Fujien cuisine pays particular emphasis on umami taste, as well as retaining the original flavour of the main ingredients without overpowering them.

Diverse native seafood is used, including local fish, shellfish and even turtles. The most common cooking techniques in the region’s cuisine include braising, stewing, steaming and boiling. “Shrimp oil” 蝦油 is also commonly added into dishes along with oysters, crab, and prawns.

At Beng Hian Hokkien Restaurant, the chefs uphold decades of culinary tradition, preparing each dish with the most superior choice of ingredients. The restaurant’s authentic Hokkien cuisine has gained both local as well as international recognition. Founded in 1949 and having started off as a humble shophouse, Beng Thin Hoon Kee Restaurant is one of the few Hokkien restaurants that continues to offer traditional tastes.

The majority of the crowd that frequents Beng Thin Hoon Kee tends to be the old folks. Nonetheless, it is with hope that this cuisine of lost recipes will be appreciated by younger generations, as Beng Thin Hoon Kee continues to improve on its service. A must-try dish at this restaurant is the Fujian Style Duck Salad with Mango. The crunchy honeydew and rock melon strips along with fragrant mango slices provide a delightful tropical fruit taste to the generous serving of the roast duck shreds.

The Hakka have a unique style of Chinese cooking that is not very well-known out of the Hakka home. Texture of food is the main emphasis, whereby preserved meats which are stewed, braised or roasted for more ‘texture’ to the palate.

The main skill in Hakka cuisine is in cooking the meat thoroughly while maintaining tenderness throughout and bringing out the natural flavours. Plum Village Restaurant is one of the few authentic Hakka restaurants still standing in Singapore. Situated within the quaint locale of Sembawang Hills along Upper Thomson Rd, though small and likely unnoticeable, this restaurant serves up a selection of highlighted signatures of the Hakka cuisine. 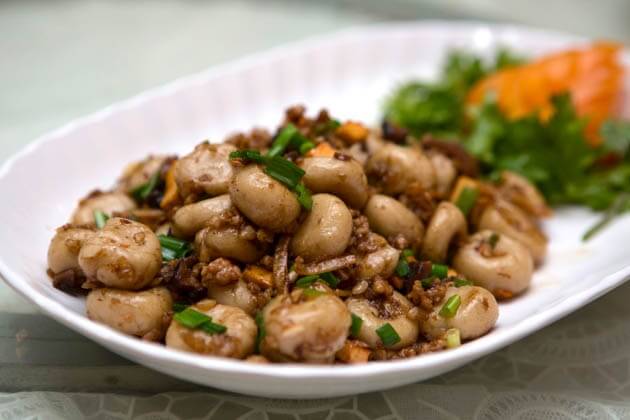 Dishes worth trying include Plum Village’s Abacus Seeds, Salted Vegetables with Pork as well as their line up of savoury soups. 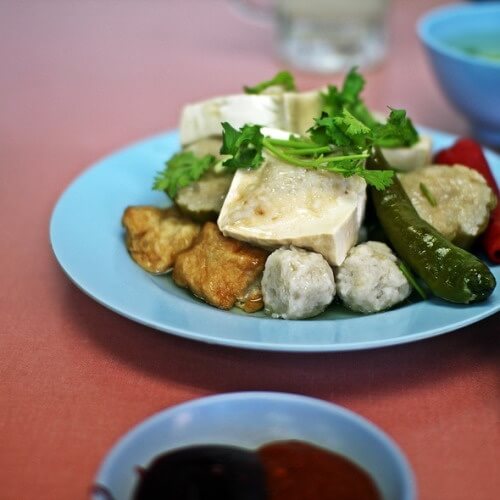 Here at Goldhill Hakka Restaurant, there are only 6 items on the menu and the most popular dish is none other than the old-school yong tau foo. A recipe that has remained intact since the founding of the restaurant, with the originality of taste still being upkeep over the decades.

Hainanese food is a lot lighter and less oily compared to the mainland. The menu features a wide range of seafood, but one of the most famous dishes is also the wenchang chicken, which has been adapted into the famed Singapore Hainanese chicken rice. Mooi Chin Place is a restaurant with a long history of over sixty years which started out as a restaurant and bar. It was after World War II that the second generation owner, Mr Michael Wong took over management of the restaurant insisted on sticking to the traditional way of conjuring Hainanese cuisine. 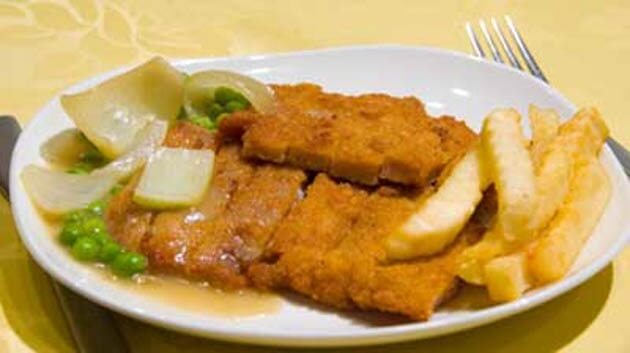 One of the must-try specialties here is the Hainanese Pork Chop. The pork meat is coated with a crispy layer of breadcrumbs made from air-dried fresh bread while at the same time, the meat itself exudes a delectable degree of tenderness.

Other specialty dishes that help one reminisce the style of Hainanese cooking include the Deep Fried Pomfret and Fried Fish Maw. One’s dining experience is rounded up well by calling for the Hainanese Mutton Soup. This soup carries strong Hainanese flavours with it. Probably the oldest Hainanese restaurant in Singapore, Yet Con was founded in 1940, tracing its history back to the period before Singapore’s independence. The restaurant is bedecked with ceramic tiles on its walls and uses wooden tables coupled with dated wooden chairs. The signature dish of this restaurant is none other than their namesake Hainanese Chicken Rice, which originates from Wenchang City in Hainan. The Hainanese Chicken Rice Steamboat, this is another must-try here and you’ve got to do it fast as sad to say, Yet Con is one of the heirlooms which will not be passed down to future generations.

Showcase YOUR dialect food on Instagram and Win CASH Ang Pows from @GavisconSG! This #CNYHoChiak Instagram Photo Contest is brought to you by Gaviscon Double Action – providing double relief from heartburn and indigestion. Gaviscon Double Action also contains antacids, a substance that neutralizes stomach acidity that could lead to stomach pain if too high. Antacids neutralize excess stomach acids by increasing the pH levels in the stomach, therefore relieving discomfort of indigestion and stomachaches.

*This post was brought to you in partnership with Gaviscon