Dim Sum Haus caught my attention when I saw that it sells charcoal siew mai, and I knew I had to head down to Jalan Besar to give it a try. 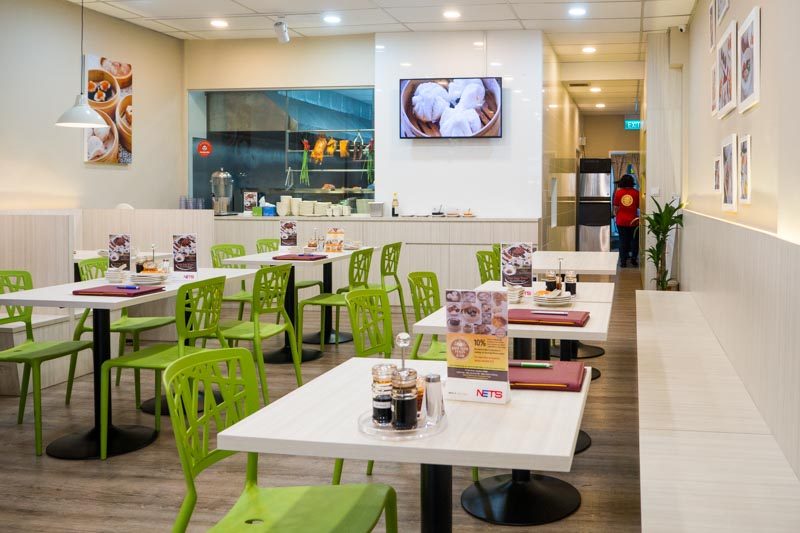 The shop is brightly lit and minimally furnished in wooden accents, with pictures of its signature dishes hung on the wall so you’ll know what to order. We took a peek into the kitchen, and found that the dishes are made fresh upon ordering. It was bustling with skilled chefs working in tandem like an orchestra. 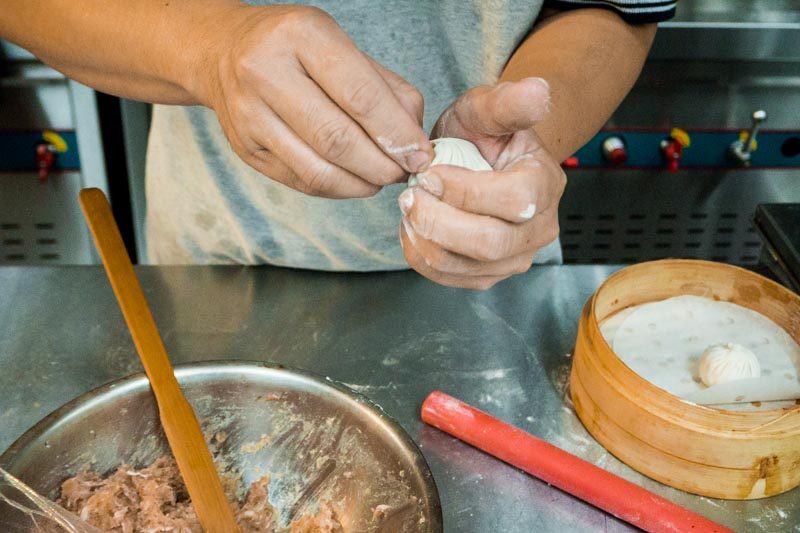 Each crease and fold of the xiao long bao were formed meticulously, the chef keeping in time with a silent beat. 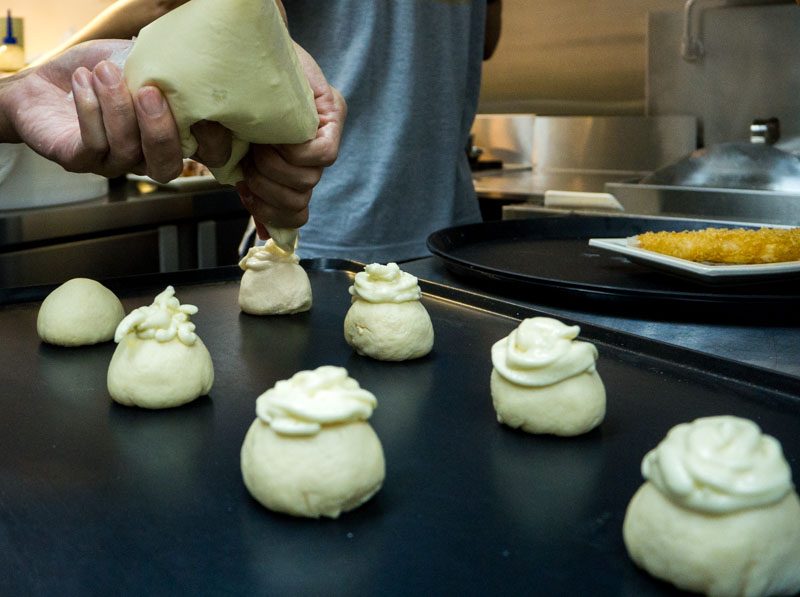 The swirls made on the custard buns were mesmerising to observe — I had worked up an appetite just watching the chefs in action. Not long after, the dishes were served to our table. 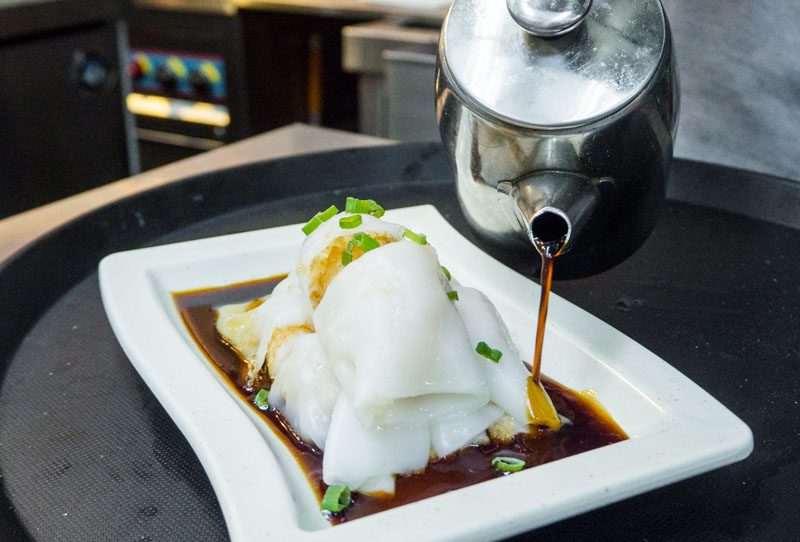 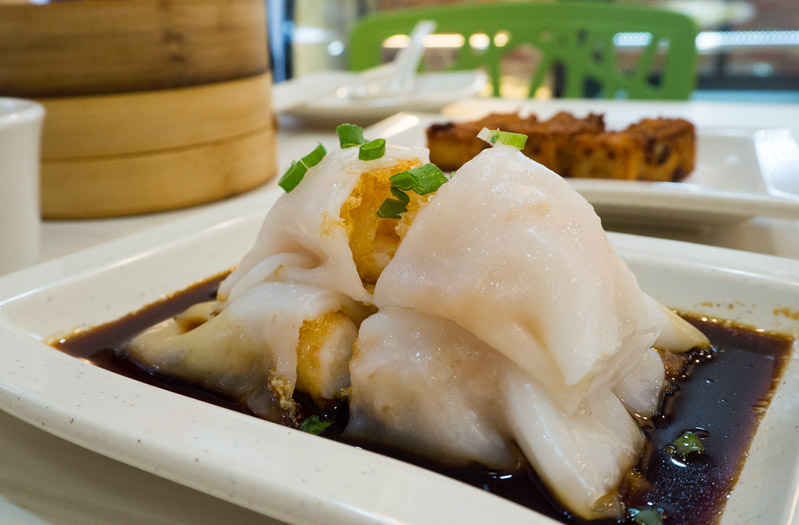 Made from scratch, the Steamed Crispy Rice Roll With Shrimp ($4.20) was folded twice to hold the deep fried shrimps, yet the skin held its elasticity and wasn’t overly thick.

Crunchy and soft at the same time, the fried shrimps certainly gave a different texture as compared to the classic ones wrapped with char siew or prawns. 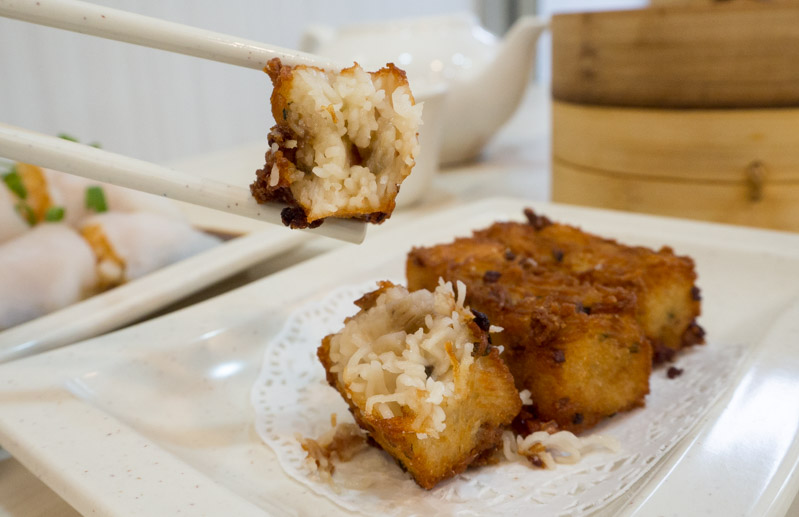 One of my favourites, the Crispy Mee Sua Kueh with Chinese Sausage (3 pieces, $3.60) was fried till crisp on the outside, and each strand of noodles was well-cooked without being soggy.

The kueh was also perfumed with the fragrance of the Chinese sausage. I know what I’ll be ordering again when I return. 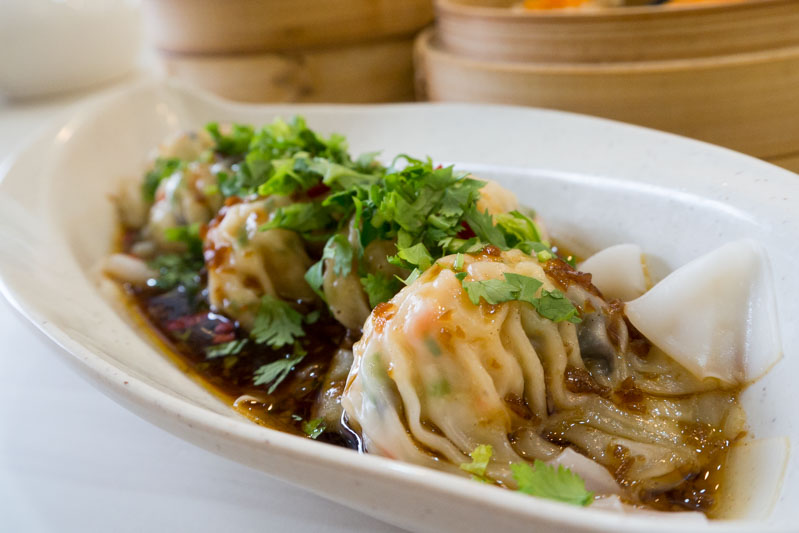 The Japanese Dumpling (5 pieces, $4.60) included a generous amount of meat and plump shrimps, while the skin was delicately soft.

It was garnished with a good amount of coriander and was soaked in tangy Worcestershire sauce, which helped cut through the flavours. 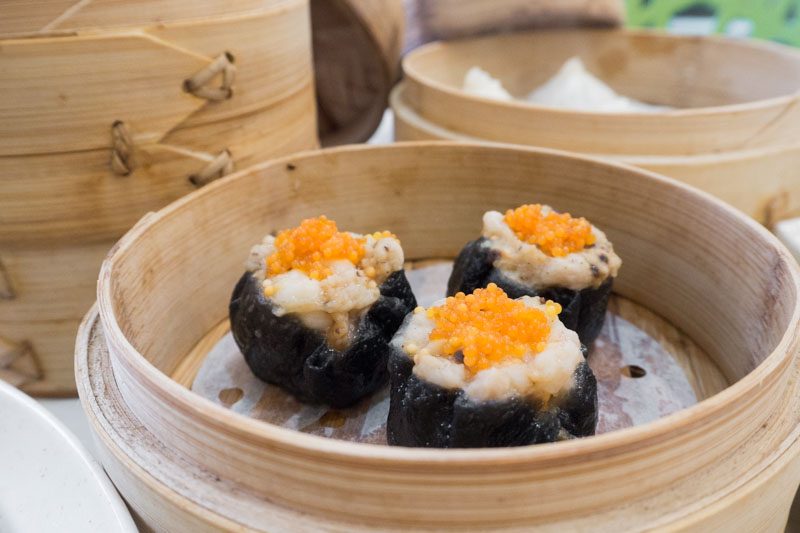 The moment that I’d been waiting for — the Steamed Charcoal Chicken & Shrimp Dumpling (3 pieces, $4) was void of its familiar yellow outer covering. Yvonne, one of the owners, explained that the initial plan was to use seaweed, but had changed it to charcoal skin as it’ll retain its shape after steaming.

It came with a whole shrimp and I was glad to see prawn roe sitting atop it that gave each bite a good crunch. Other than that, it tasted like your average siew mai. The Steamed Shrimp Dumpling “Har Gau” (3 pieces, $4.20) had translucent skin and neat folds encasing an entire fresh water prawn within. A dim sum classic that appeared ordinary when compared to the dishes before this. 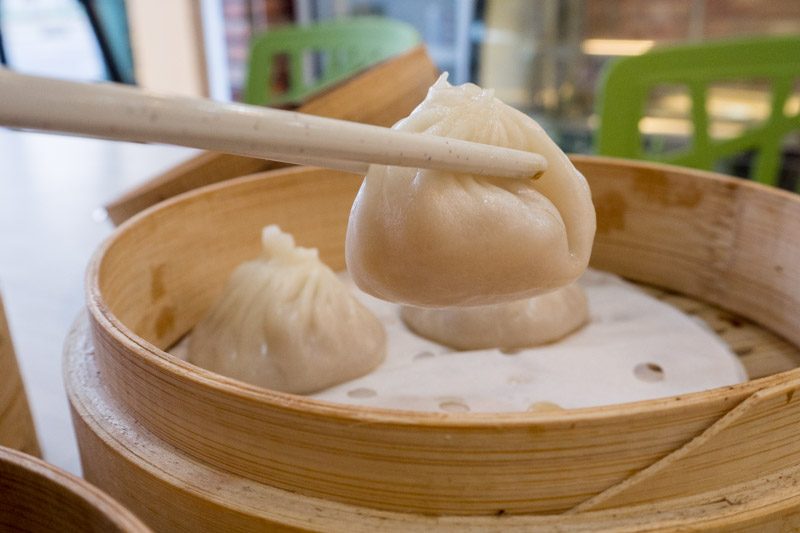 I had high expectations for the Xiao Long Bao (3 pieces, $3.50), but the skin was slightly thicker than expected and the broth lacked flavour, which would have been better if the natural sweetness from the pork meat was more intense. 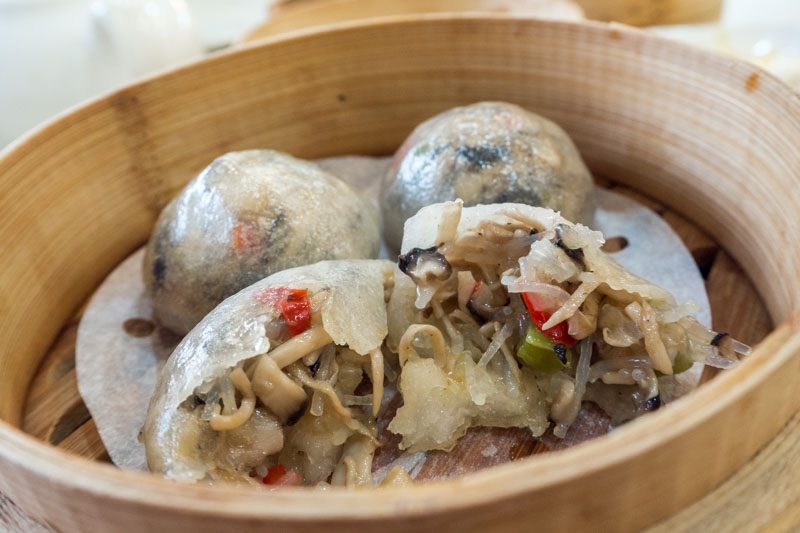 The Crystal Skin Mushroom Dumpling (3 pieces, $3.90) was surprisingly delicious, even though it’s made entirely of vegetables.

The skin, though a tad thick, held a good serving of glass noodles, mushrooms, and chopped chilli, seasoned with black pepper for a mild spicy kick. Salted egg yolk buns are a dime a dozen these days, but Dim Sum Haus’ Baked Salted Egg Custard Bun (3 pieces, $4.80) was arguably one of the best I’ve tried. 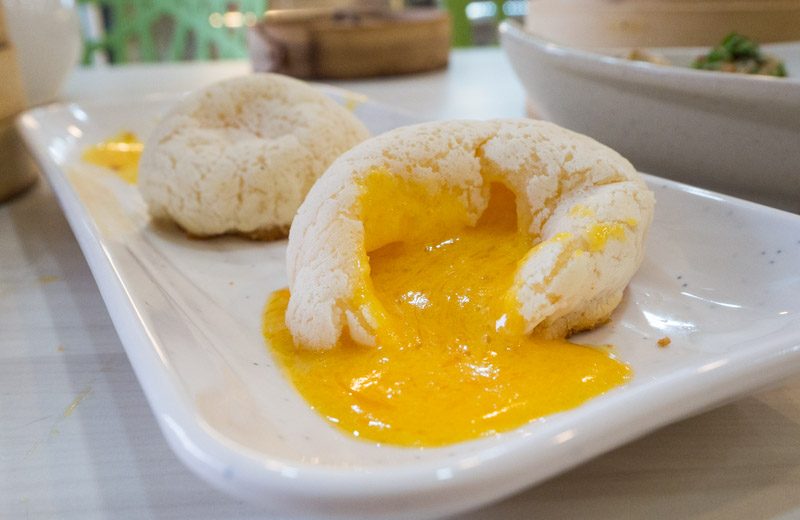 The buns aren’t made of the regular fluffy steam baos but a crusty, pastry-like casing that is similar to the Hong Kong-style baked barbecue pork buns. This was probably the reason why they were so delectable, and I couldn’t stop at one. 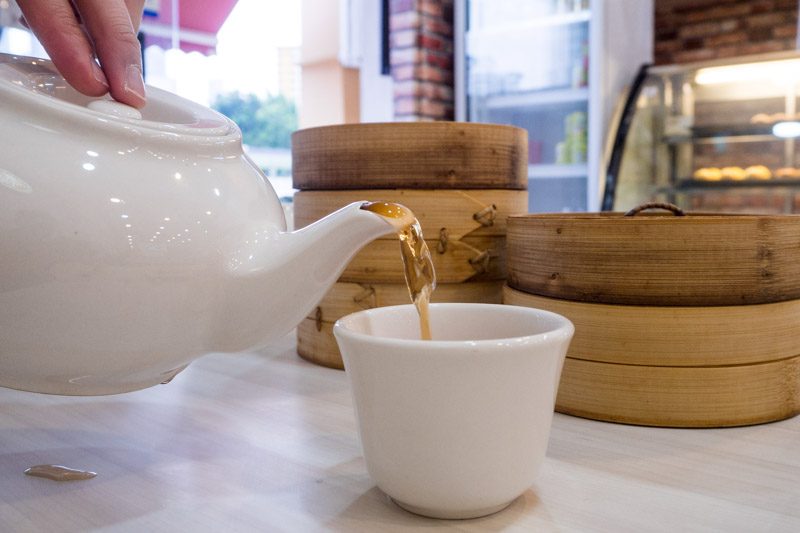 Order a pot of Pu Er Tea ($1.20 per pax) to cleanse the palate in between the dishes and your meal is complete. While there were a couple of hits and misses in the thickness of the dumpling and crystal skins, I’d definitely come back to Dim Sum Haus when I’m craving for its Baked Salted Egg Custard Bun and Crispy Mee Sua Kueh with Chinese Sausage, which were both strong contenders that could easily beat its popular competitor that’s just down the street.

Also, if you haven’t already noticed, all the dishes cost less than $5 (except congee), which is rather affordable.

Previous article999 Coriander Hot Pot: You’ll Either Love Or Hate This Dish Served At A Thai Restaurant In Japan
Next articleCinnamoroll Pop-Up Cafe Opens At Kumoya From Now To 13 Aug ’17 With Dishes Almost Too Cute To Eat