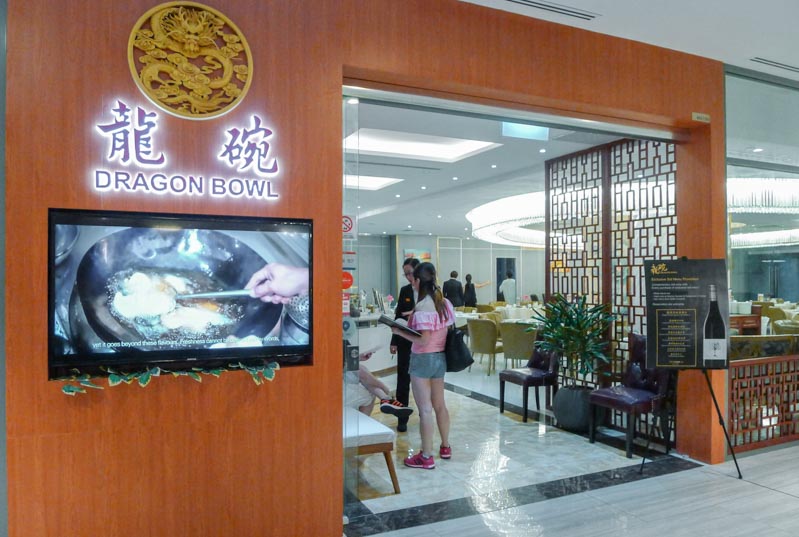 Situated on the second floor in the new wing of Marina Square, Dragon Bowl is a Cantonese restaurant that serves up a wide variety of traditional cuisine and dim sum.

For you guys who are wondering about its unique name, the “dragon bowl” is the name of the imperial meal made for emperors in ancient China, and reflects the restaurant’s dedication to the highest of service and ingredient standards. The interior was decked out in plush leather chairs, and its main feature was the large crystal chandelier lighting up the centre of the restaurant. Dragon Bowl also uses its spacious dining area for private large-scale events, such as wedding banquets and company dinners. 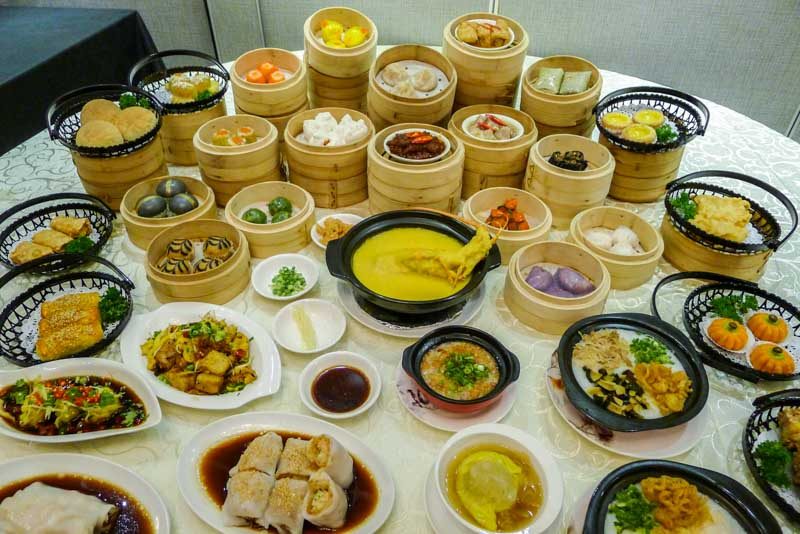 We were treated to a display of their signature dim sum dishes, with a total of 33 offerings to choose from.

From now till 31 Dec, get 30% off all a la carte dim sum during lunchtime. You’ll sure be spoiled for choice, and the wide selection will satisfy even the pickiest of eaters. 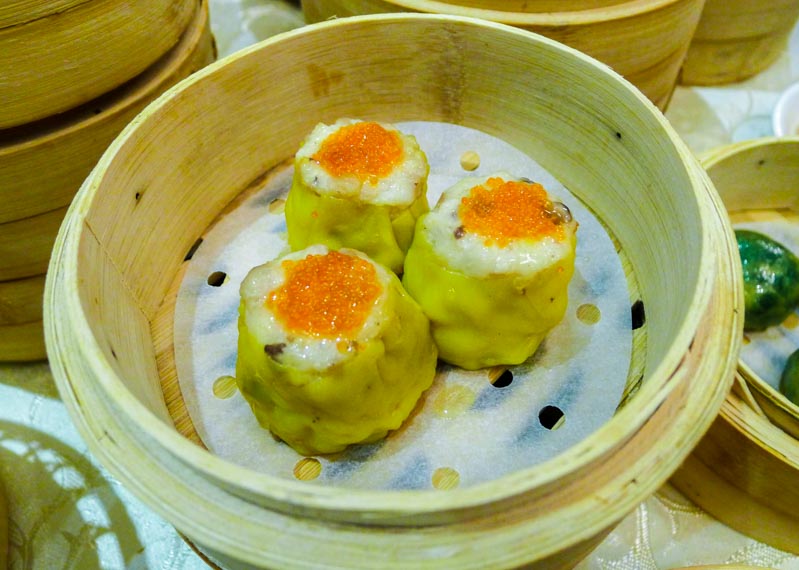 The Steamed Siew Mai with Fish Roe ($5.30) was generously filled with pork and shrimp, topped off with a smattering of fish roe. I was glad that the fillings were not minced too finely, and could tell the individual ingredients apart, from the succulent prawns to the crunchy water chestnuts. 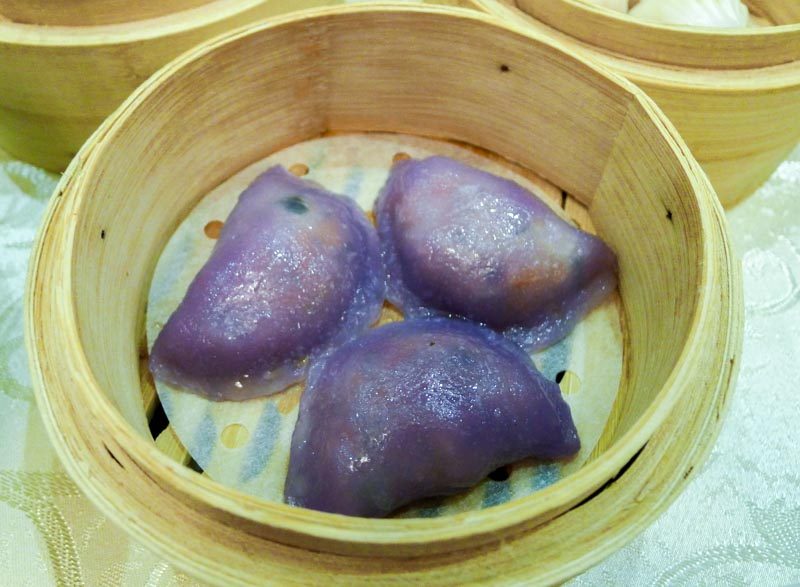 Dumpling lovers will love the Steamed Violet Vegetable Dumpling ($4.30). This pretty coloured dim sum reminded me of the local favourite soon kueh, with its simple filling of turnips and other various veggies.

The dumpling skin was kind of a let down though, as it was a tad too soft.

Tuck into their Steamed Fried Carrot Cake with XO Sauce ($6.50) that was stir-fried with pickled turnips, bean sprouts and egg. I’m usually not a fan of carrot cake, but the wok hei fragrance of this dish made it tasty enough for me to have a second serving.

Paired with the aromatic XO sauce that elevated the dish, its no wonder that this is one of Dragon Bowl’s signature offerings. While the Poached Northern Mala Dumpling ($4.30) isn’t authentically Cantonese, it was nonetheless one of my favourites of the evening. The poached pork dumplings drenched in a spicy mala vinaigrette, topped off with a hearty handful of ginger, coriander and bird’s eye chilli.

When it comes to the flavours of this dish, I’d say that Dragon Bowl has aced the perfect ratio of tartness from the vinaigrette to the mala spices. Be careful not to bite into the bird’s eye chilli though, this dish is definitely not for those who can’t take spicy food. 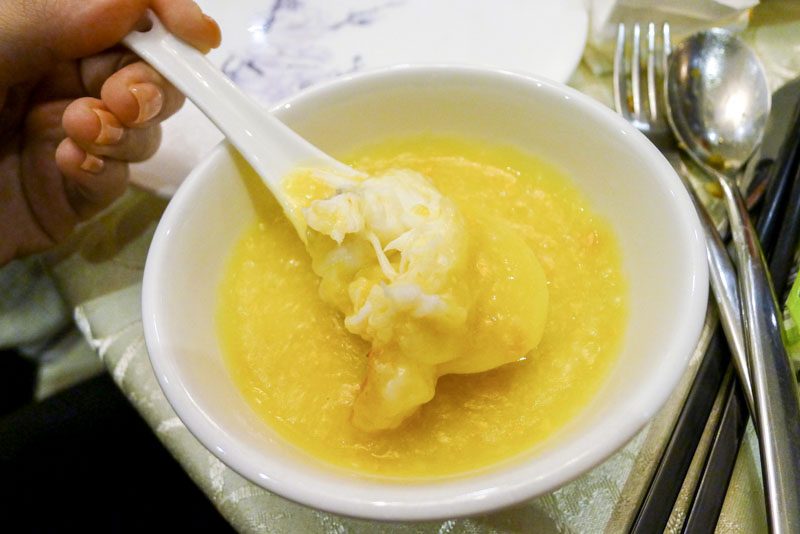 One of Golden Dragon’s newest additions to the menu is the Crab Roe Live Lobster Golden Porridge ($38). Fresh lobster is used in this dish and the flavours of the porridge are further enhanced by savoury salted egg yolks. A highlight on Dragon Bowl’s menu this December is the Flaming Chicken ($19.90 a la carte), a cheeky play on the literal Chinese name for turkey.

The chicken is marinated with an in-house special marinade, cooked with Dragon Bowl’s secret method, then drenched in alcohol and set ablaze. The chicken was amazingly tender and flavourful, and the gravy had a strong taste of alcohol.

For a limited time until 31 December 2017, diners will get to enjoy this dish at only $1 when they spend a minimum of $80 in a single receipt (For DBS/POSB cardholders only), so what are you waiting for?

I felt that the service could do with some improving, and the wait staff could have exercised more patience and spatial awareness when it came to serving their diners. Apart from that, Dragon Bowl impressed me with their approach to the Flaming Chicken, which really packed a punch in terms of flavour.

My favourite dish of the evening was the Poached Northern Mala Dumplings, which had a great intensity of heat without compromising on taste as well.