Simply settling for what’s available seems foreign to most food enthusiasts of our country — it wouldn’t be too daunting a task for them to rattle off a list for the best chicken or duck rice places in Singapore.

You’ll hear the usual famed names of roasted or braised duck and roasted or Hainanese chicken rice places. What you probably wouldn’t get is a place to eat Pipa duck, or the not-so-common Soya Sauce Chicken. Eat3Cuts in Bedok offers both delicacies, as well as roasted duck. The newly opened stall had an accidental birth. Having tried Chef Ho’s Hong Kong style roast once before, current co-owner Sharon momentarily decided that his roast delicacy of such high standards deserved a stall on its own. 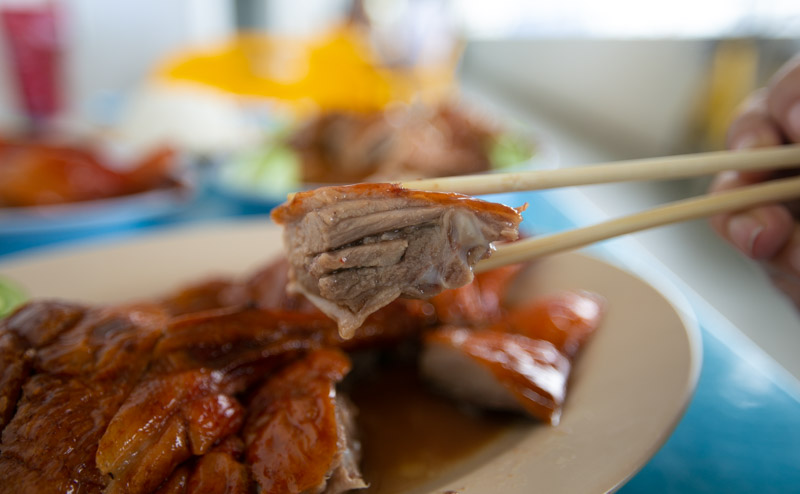 Locals who set the bar high for their roasted delights would know that good roast is hard to come by. Eat3Cuts presented the ideal Roast Duck (S$28 for a whole duck, S$3.50 for rice) with crispy skin that separated easily from the fat and meat.

These kinds of standards seem only to be found in restaurants or famed roasteries; rarely do we get to enjoy it from regular food stalls.

As the only protégé of a famous Hong Kong culinary chef who specialises in Chinese roasts, Chef Ho is armed with more than 30 years of experience in his art. 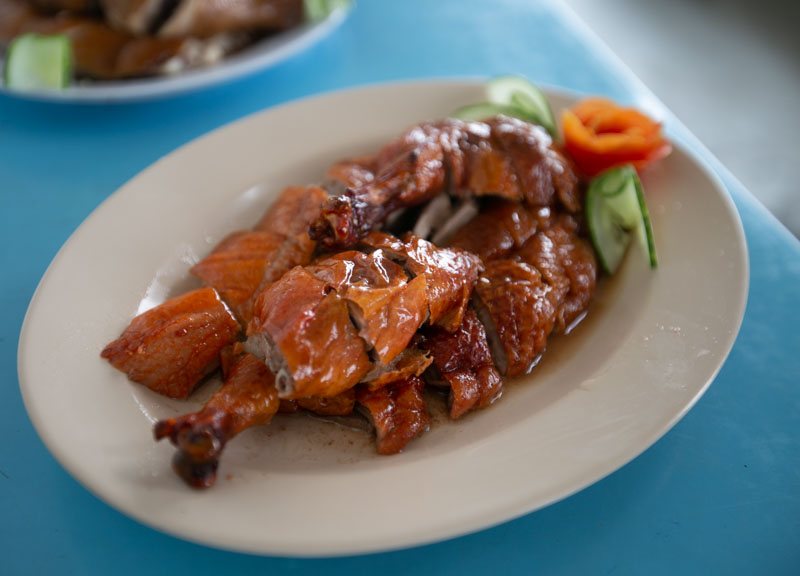 We often rationalise paying restaurant prices when the occasion calls for it since apart from the taste, we are also paying for the skill, time and laborious effort put into each roast. It’s the common value-for-money mindset prevalent amongst us.

Chef Ho and Sharon explained that each roast takes about five hours to prepare, cook and cool.

At that, I was surprised that they have decided to keep the prices low — almost half of what you’ll expect at mainstream restaurants — despite having an on-par quality. 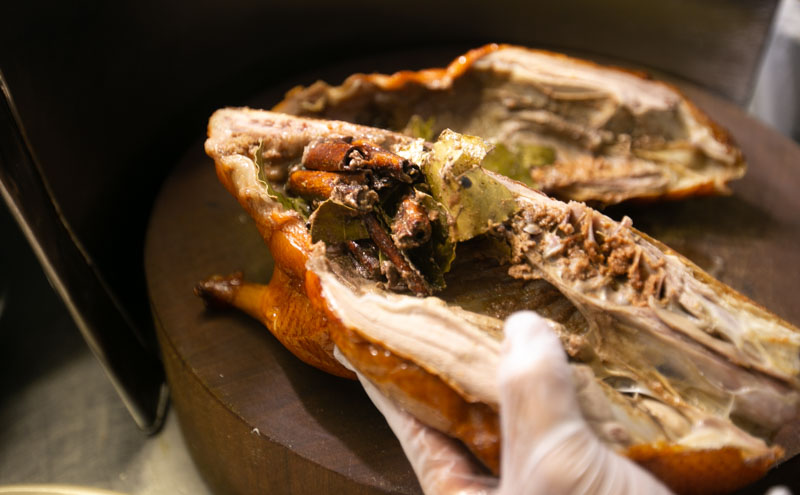 The duck is stuffed with an array of common Chinese spices including bay leaves, cinnamon and star anise. Some may feel that the addition of spices gives the meat a medicinal quality. I definitely beg to differ; the rich and savoury stock from the spices reminded me of a hearty bowl of herbal chicken soup. 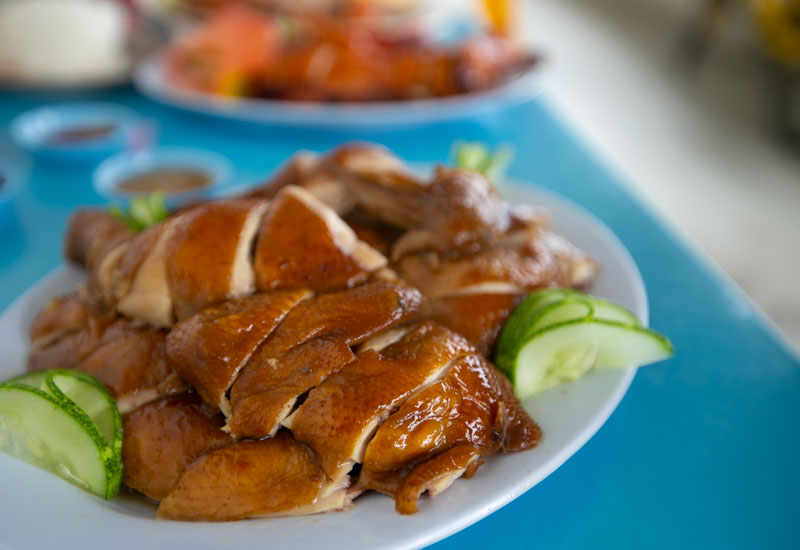 While roasted and white chicken rice are easily found in our food courts, it’s not often we stumble upon a stall offering soya sauce chicken. Even then, it is usually subjected to criticism that it lacks a strong-enough herbal flavour (like the traditional Hong Kong versions).

Chef Ho’s version is bound to quell all your complaints, offering an authentically Hong Kong-style Soya Sauce Chicken (S$20 for a whole chicken, S$2.50 for chicken). 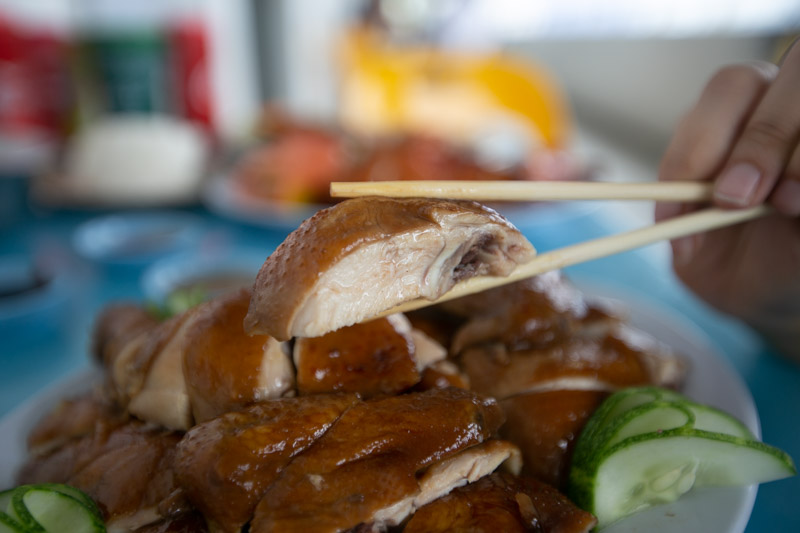 Herb stock from the roasted duck is poured over the chicken and absorbed by the tender meat, resulting in a combination of sweet and savoury flavours. As its name suggests, Pipa duck gets its name from the Chinese string instrument as its look resembles one when it is typically opened up and flattened for roasting.

This rather exquisite dish reminded me of the more familiar peking duck usually served at restaurants.

Like its close cousin typically served in a Chinese wrap with leek and a sweet seafood sauce, the pipa duck is marinated in Chef’s own mix of seafood sauce before popping it into the charcoal roaster. I expected the duck to turn out disappointingly dry since the roasting process would have presumably absorbed all of the moisture from the opened duck. Yet, quite miraculously, the texture of the meat was rather similar to that of the roast duck, being tender and moist. 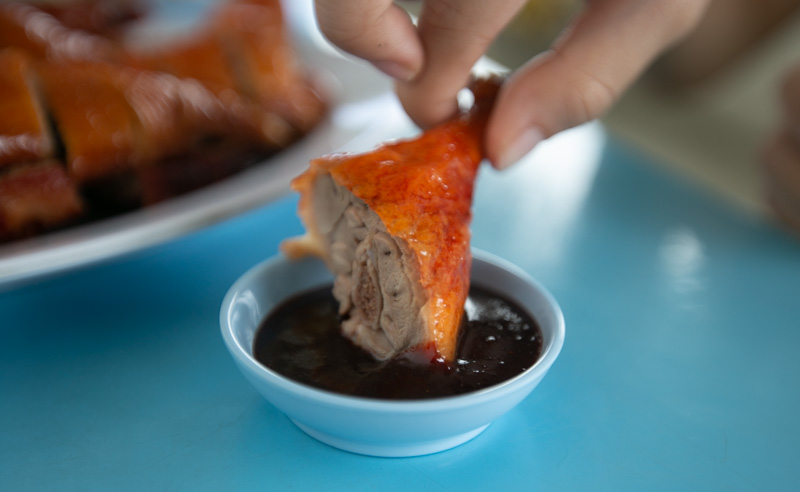 You might immediately remark that the meat lacks the robust flavour of the roasted version if you haven’t had pipa duck before. Most of its flavour is meant to come only from the bony areas where it was marinated.

Traditionally, the rest of the meat is meant to be cut up and fried separately as another dish or simply dipped into the deep red seafood sauce to taste.

This rare roast has been lauded by the stall’s Taiwanese customers who attest to its authentic flavour, making requests for the meat to be fried separately with noodles in black bean sauce, as they do in Taiwan or Hong Kong.

The stall is admittedly quite inaccessible, located in Bedok’s industrial cooking houses. Knowing this, Eat3Cuts is actively encouraging customers to pre-order and are promoting their affordable delivery services.

I find it difficult to fault the food served here, with their indisputably remarkable restaurant-standard roasts, especially their roast duck.

They have currently moved to a more accessible location in Burlington Square mall, offering breakfast options like porridge and noodles from 9am while their roasted delights will be available from 11am.