I love Mexican food but there’s only one problem, it could get a little steep in the expenses department, don’t you agree? My army buddy and I were recently discussing food places to check out, and that’s when he mentioned El Cocinero which is situated in the Novena Regency condominium.

According to him, it’s a hidden eatery serving decent Mexican food at reasonable prices. I’m no Spanish speaker, so I Googled “el cocinero” and it actually means chef— that actually makes perfect sense! When I reached the condo I noticed that there were several eateries facing the main road but El Cocinero was nowhere in sight… that was until I saw a poster of a plate of tacos placed outside one of the entrances. There it was, right smack at the corner! There were six tables scattered across the corridor (a real quiet one). You could literally hear a pin drop. “How on earth would anyone know of this place?” I thought to myself.

It wasn’t until music from the restaurant lightened the atmosphere from being less awkward— I’m not dining at a library for goodness sake. El Cocinero is run by Shi Shi and Stan and they’ve been around since 2018. Stan was previously working in the F&B industry dealing with Mexican cuisine and decided to venture on his own. Shi Shi, who has no prior experience with food, decided to support him and help out at this humble little eatery— how sweet, awwwwww!

What I tried at El Cocinero I spotted a few loaded nacho options on the menu but I didn’t want something heavy for a starter. I ordered a bowl of Tortilla Chips (S$2.90), Guacamole (S$4 for regular) and Cooked Green Salsa (S$1) instead. The Tortilla Chips were satisfyingly crispy and warm and paired really well with the creamy Guacamole. The chunks of tomatoes and onions provided an additional depth of texture and flavour to the combination, but I just wished that they were cut a little bit smaller (it was a little too chunky for me). The Cooked Green Salsa is made of tomatillo (green Mexican husk tomato) which was a breath of fresh air as compared to the boring red salsa that we usually see served at other Mexican establishments. It had an acidic tang and kick-started my appetite for the other dishes. I moved on to the Beef Cheek Taco (S$11.80), which had three portions of pulled cheek meat garnished with a sprinkling of diced tomatoes and onions, served with lime wedges. I was pleased that the taco turned out to be a soft version rather than a crispy fried one, which made it less crumbly and neater to eat. Squeezing the lime on the beef cheek made the taste brighter and tart, but I felt that the beef cheek needed a little boost in its seasoning. We moved on to the Battered Fish Goujons (S$8.50). It came in a plate of six served with an orange creamy dip. The colour on the battered fish was a perfect golden brown and it was wonderfully moist and soft upon biting into it. The dip tasted like a mayonnaise spiced with chilli and was a great accompanying dip for the fried fish. I’ve had fried fish paired with tartar sauce a countless number of times, and this was a refreshing rendition— thumbs up! The next dish we tried was the Pork Pastor Quesadilla (S$9.50). It came with six decent-sized pieces and the tortilla skin was nicely charred. The quesadillas were filled with pieces of pork that were marinated with Mexican spices, mozzarella cheese and bits of pineapple. This dish was the heaviest of them all and I’d  recommend sharing it.

The meat was marinated nicely but I felt that the flavours could be slightly stronger. The bits of pineapple provided some sweet touches to the filling. My dining partner spotted a bottle of ghost pepper sauce on the table and decided to try it. I remember seeing plenty of videos on YouTube about people describing ghost peppers as being 170 times hotter than Tabasco sauce!

When we both had a go at it, I’m happy to report that it packed a humongous punch to our senses (definitely not one for the faint-hearted)! As spicy as it was, it enhanced the experience of eating the quesadillas for sure. 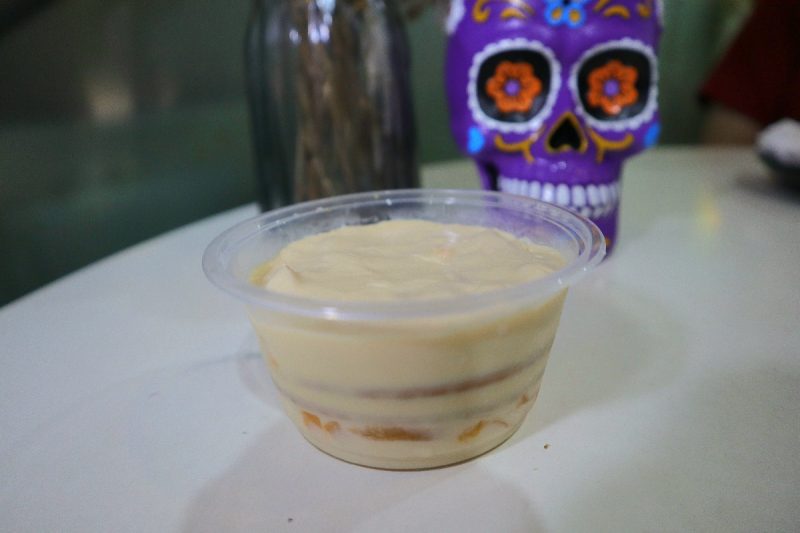 We wanted some dessert and proceeded to order the Peach Carlotas (S$3). Even before I opened the cover, I was being judgmental and wasn’t having much expectations from something coming out of a plastic container. Sorry Shi Shi & Stan, I was totally wrong. As my spoon tucked into the different layers of peach pieces and cookie dough, my face instantly lit up. The cookie dough pieces were buttery and fragrant and the peaches were delightfully sweet. It was definitely the underdog of the meal. My dining partners and I loved it so much, we could have gone for seconds. El Cocinero doesn’t have much social media presence and mainly relies on its nearby expatriate residents to recommend them by word of mouth.

Head down to Novena today and give them a try. I’m sure they will win you over with their unpretentious food and good service— without a doubt, I’ll be back!

Previous articleHappyFresh Malaysia closes down after 7 years
Next articleLaksa Labo: Popular 60s laksa recipe revived by its original chef to give you a taste of old Singapore