Google ‘Teochew Fish Soup’ and the first result, or rather, the entire first page of the search result will be an already famous stall, First Street Teochew Fish Soup, situated along Upper Serangoon Road.

Having stayed in Kovan area for more than 20 years, my family have been patronising the stall since I was young. It was my grandma’s favourite comfort food, my dad’s, mine, and now, even my seven-year-old nephew requests for it on the weekends after his swimming lessons. 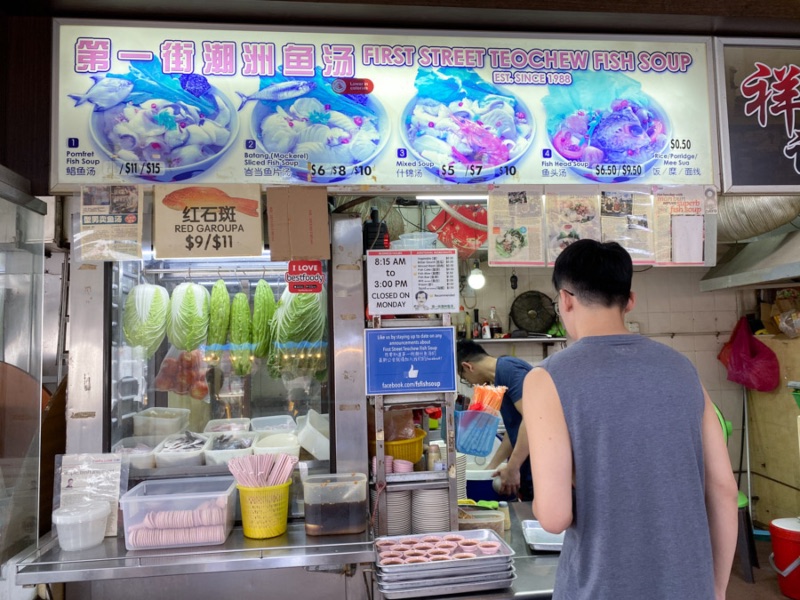 As most of you might already know, there’s something magical about this fish soup stall that enabled them to garner ardent fans and constantly attract new crowds. Weekends aside, expect to stand in line for at least half an hour even on weekdays, at odd timings like 11am!

Founded by Mr William Lim back in the 80s, First Street Teochew Fish Soup started business at First Centre before relocating to its current location. Helmed today by a power trio—Mr William Lim and his two sons, Desmond and Aaron—the stall dishes up hearty bowls of Teochew fish soup to feed their never-ending queue of patrons. Knowing the queue situation, my partner and I decided to meet at the coffee shop on a Wednesday morning at 10.45am, thinking that it was the ideal timing since it was somewhat between breakfast and lunch. To our surprise, amidst the on-going COVID-19 situation, the queue snaked all the way beyond the premise of the coffee shop, resulting in approximately an hour’s wait before we could order.

I got a glimpse (or two) of Aaron, who is also known for his scruffy good looks, working behind the heat as my orders were taken by Desmond, the elder of the two. After a 15-minute wait for my bowls of fish soup, I was ready to dive in and savour the goodness of their 30-year-old (probably more) recipe. 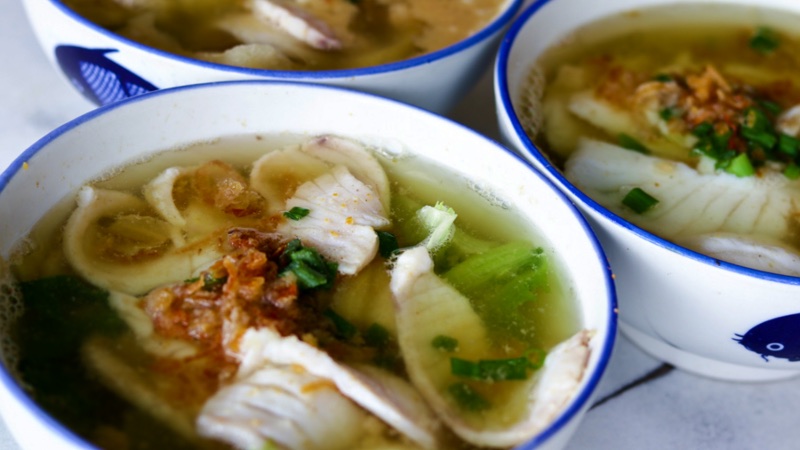 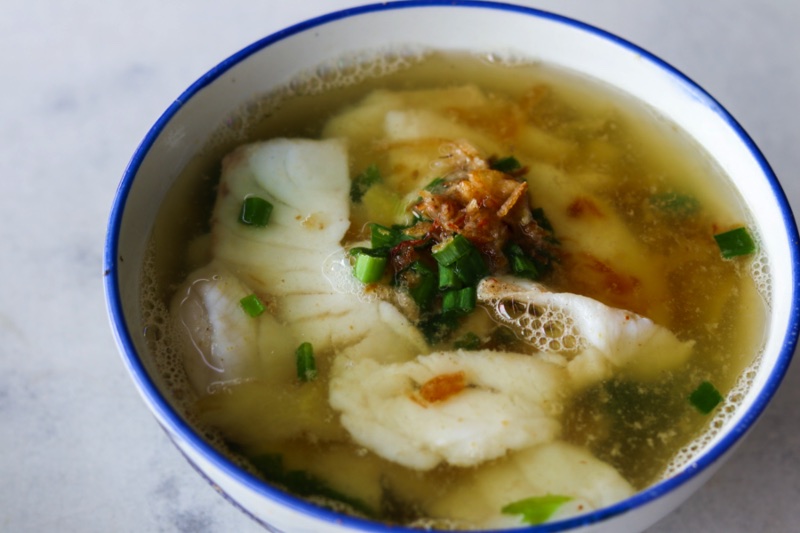 As a Teochew, I particularly enjoyed the broth as it comprised of ingredients that were commonly found in my grandma’s kitchen. Flavours of the ginger, fried shallots, and more importantly salted vegetables came together perfectly, giving the soup its clean flavour and depth of saltiness.

The soup’s savoury umami flavour was further intensified by the addition of dried flatfish, an uncommon ingredient to use in fish soup since it might ruin the taste if not treated properly. 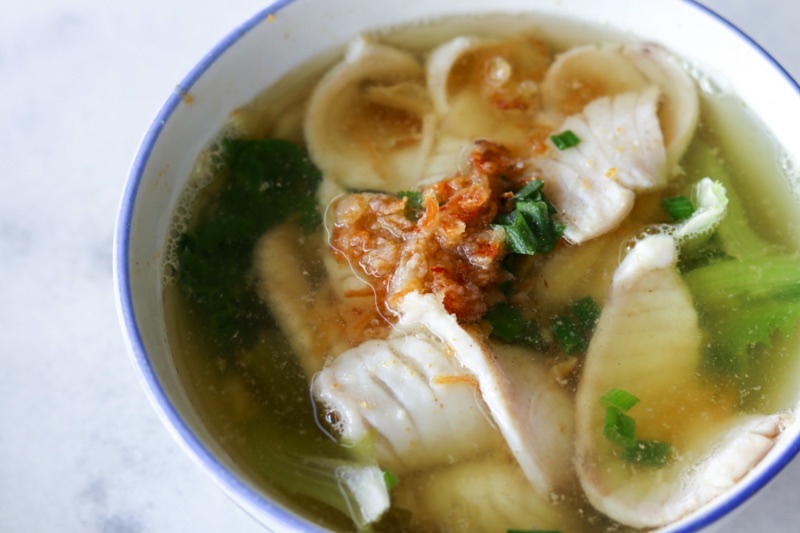 The fish slices in our soup were succulent and fresh. As the fishes used were bought fresh daily, sliced and then marinated for two to three hours, there was no fishy aftertaste—the perfect way to savour fish any time of the day. Most commonly served at the stall is the Batang (Mackerel) Sliced Fish Soup (S$6/S$8/S$10), the cheapest (but equally as tasty) option amongst the three. With about seven slices in the smallest bowl and 16 slices in the largest, this option is good for a valuable yet satisfying meal. The slices of batang fish had a springy and chewier texture which I liked due to its contrasting mouthfeel. A pricer choice, but probably one that is well-loved by all fish lovers, the stall’s Red Garoupa Fish Soup (S$9/S$11) is the bowl that I would recommend for first-timers. The fish slices were more delicate and tender as compared to the batang, and had a sweeter flavour profile. Flaking nicely into the soup, the sliced garoupa, when eaten together with a bit of broth and rice, was so delectable and comforting that it made the long wait worth every second. If you are not a fan of fish and would rather opt for an array of seafood, the Mixed Seafood Soup (S$5/S$7/S$11) would be right up your alley. Consisting of batang fish slices, prawns, fishcakes and fish maw, you will be spoilt for choice with the array of flavours and textures in this hearty bowl. 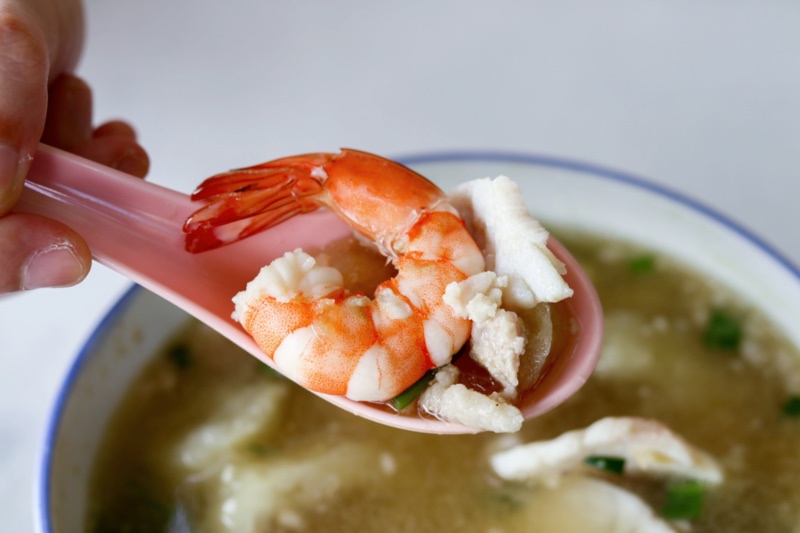 Like the fish slices, the prawns in our bowl of seafood soup was fresh with its pinkish exterior and slightly firm-crunchy texture. What I liked specifically were the strips of spongy fish maw which itself, was in fact, tasteless. However, it soaked up all the essence of the soup, exploding in flavour as I chewed on it. 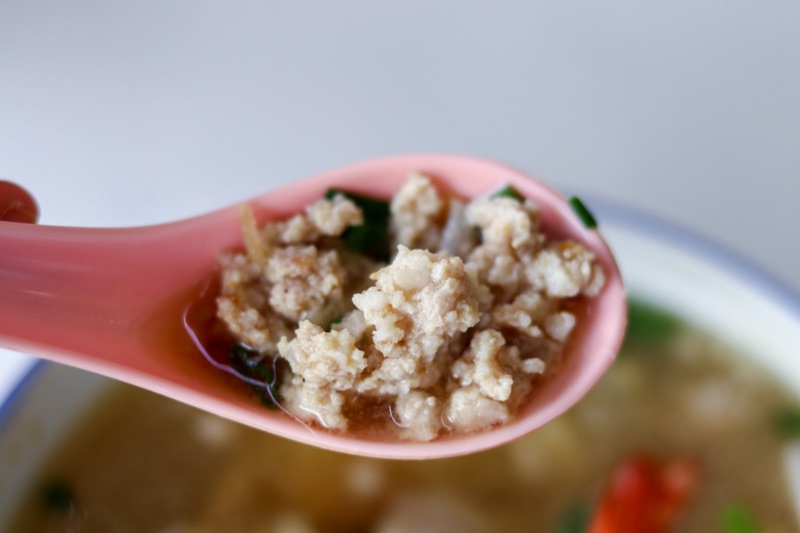 Here’s a little pro-tip from my years of eating First Street Teochew Fish Soup. Request to add a dollop of Minced Pork (S$0.50 per scoop) into any of your fish soup. Not only will it intensify the broth’s richness, it also added a pleasant sweetness that enhanced the overall flavour of the dish, making it even more addictive and irresistible—which probably explains the never-ending line of diners waiting to get their daily fix of fish soup.

With good food, good service and good looks (yes, my ladies, I’m referring to Aaron), First Street Teochew Fish Soup checked all the boxes of my ideal hawker stall which I would make return trips to. For that robust and comforting bowl of fish soup, trust me when I say that the wait is definitely worth every second of your time!