A stone’s throw away from Yishun MRT Station, Flaming Chicken Pot 雞煲火鍋 is the first hawker stall to adopt a nose-to-tail dining concept. The stall uses every part of the chicken so that nothing goes to waste.

Together with its base menu, diners can choose to customise their meal from a selection of side dishes.

The sides come at an extra charge if you want to add them to your base pot. Quail Eggs (S$4.80), Cellophane Noodles (S$0.80), Snow Crab Stick (S$4.80), Shiitake Mushrooms (S$3.80) are just some of the many ingredients that Flaming Chicken Pot has to offer. After choosing from a variety of vegetables, seafood, and meats to include in your hotpot, hand them over to the chefs and they will prepare the pot for you. 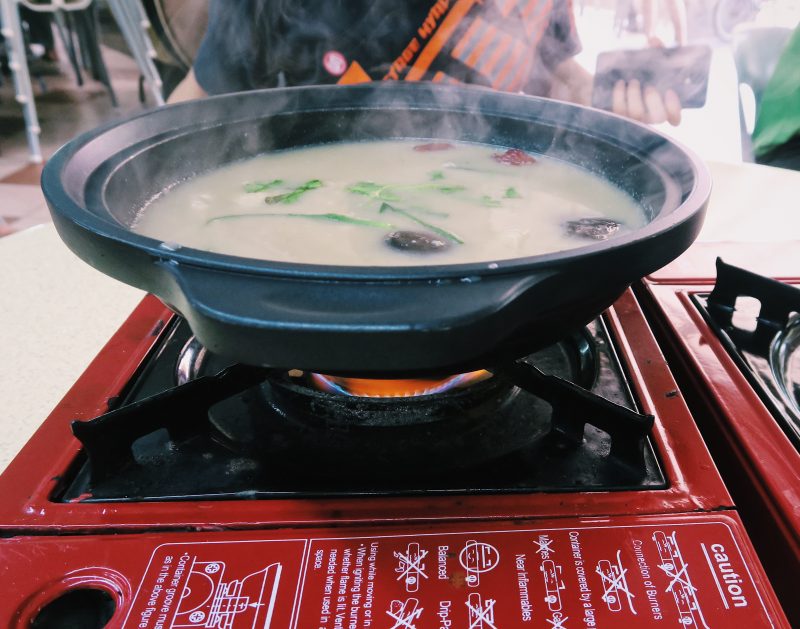 Alternatively, you may choose to cook the ingredients yourself as they will set a portable gas stove in front of you with your pot order. Most folks would choose to prepare their own pots for the experience.

The ultimate showstopper was the Black Pot because instead of directly serving you the dish in a pot, they’ll firstly flambé the pot with a shot of premium Kweichow Moutai.

This lets the rich flavour of the liquor develop before they transfer the cooked meats into the pot. 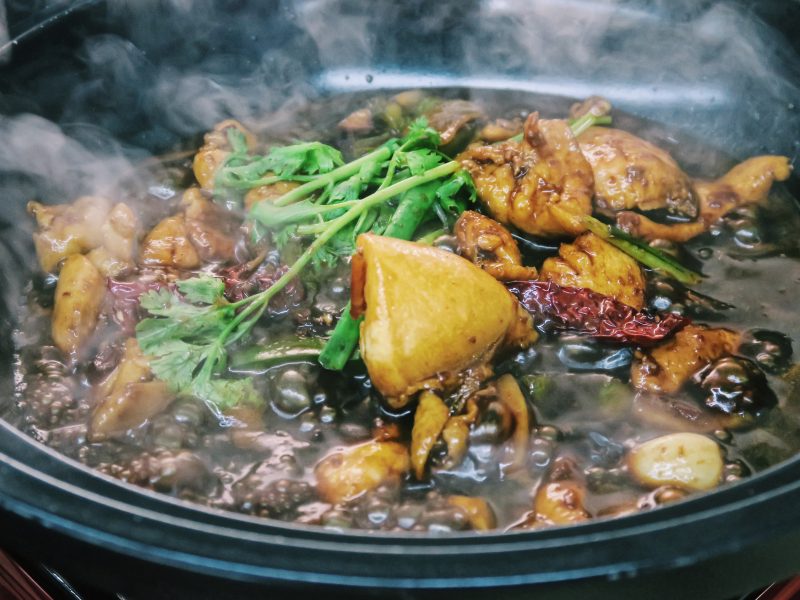 The aroma of the chicken sizzling in the thick peppery sauce was almost too hard to resist.

As we were eating, we’ve been approached by a few passers-by. Some wanted to know what it was and where was it from, while others commented that the fragrance alone made them want to devour the dish. While we were watching the impressive presentation, our White Pot was ready for us to consume.  The collagen-filled pot is boiled for eight hours with chicken feet, chicken bones, chicken fats and ten other secret ingredients to achieve a rich, silky texture. When we first sipped on the broth, the sharp taste of the peppers reminded us of bak kut teh soup. However, it was richer and went down rather smoothly.

A gelatin-like layer started to congeal as the soup started to settle, which is the collagen being released. Collagen is renowned for its revitalising benefits, especially for women — which is why the White Pot is a hot favourite among the women who dined at Flaming Chicken Pot. 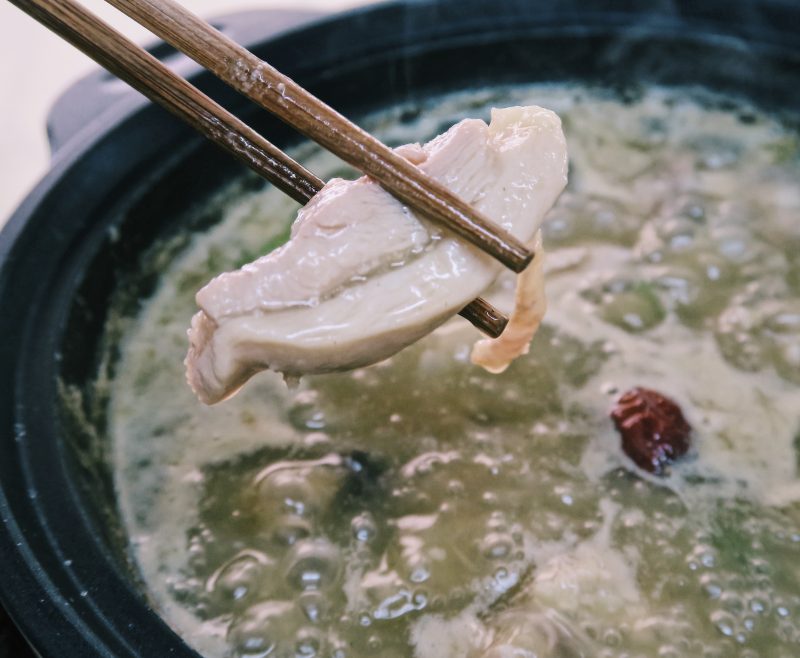 The flavours from the broth also oozed out of the soft yet slightly chewy chicken as we bit into it. 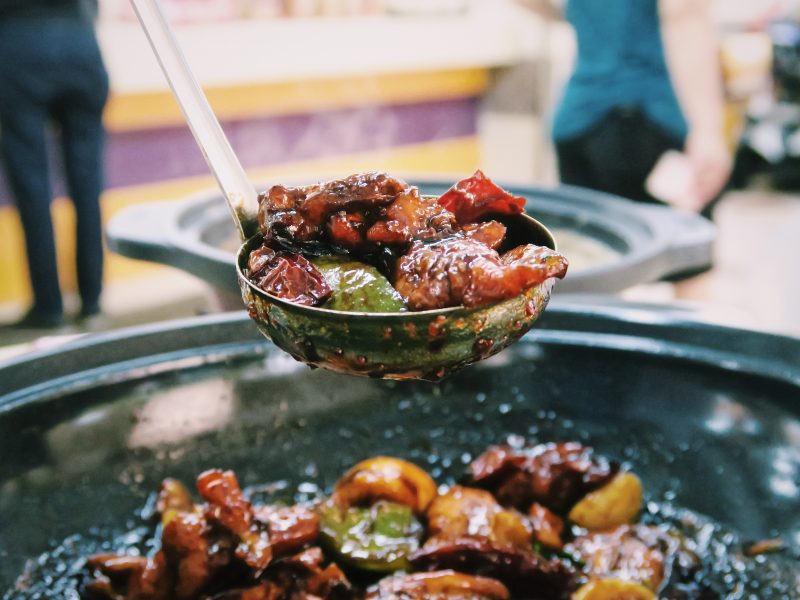 As we feasted on the White Pot, the sauce in the Black Pot started to thicken and clump onto the side. At this point, we were told to pour some of the collagen broth into the pot to mix it with the gravy. 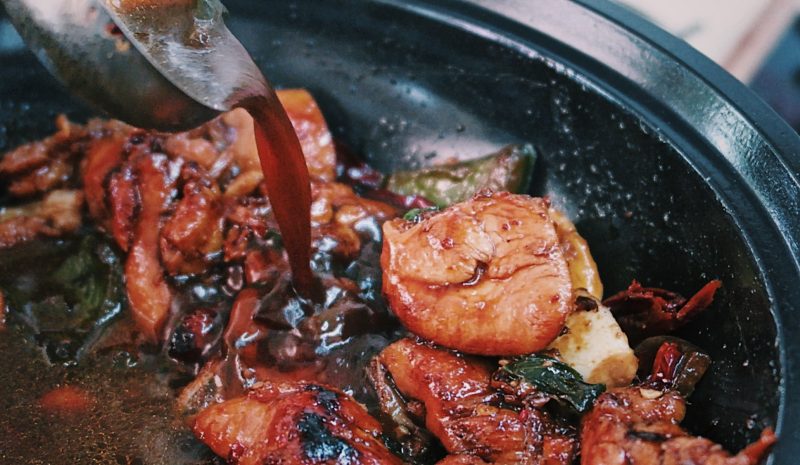 Now the Black Pot also resembles the White Pot in terms of the consistency of its soup, while the sauce was a little diluted so it’s not too salty either. 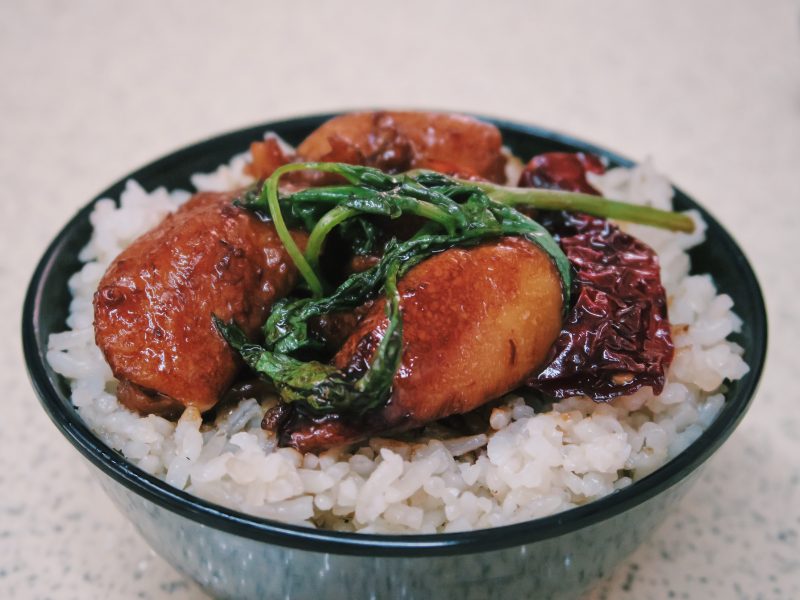 The Black Pot chicken reminded us of the Sesame Oil Chicken (麻油鸡) which we paired with their Sesame Oil Rice (S$1). Before we added the soup to the Black Pot, we scooped out some of that super gao (strong) sauce to drench our rice with. With all the aromatic flavours from the rice and chicken dish, it was indeed delectable.

When we finally ate our fills, we were only left with a full stomach and a hearty impression. My favourite part about the entire course was no doubt the collagen soup. The well-seasoned soup was addictive, to say the least, and I couldn’t stop drinking it even after we’ve finished our meals. 7-Eleven Is Giving Out FREE Mr Softee & More To Celebrate...