On a short trip to Indonesia, Yogyakarta (or Jogja as many locals call it), I’m quite excited for my first sponsored travel trip, courtesy of AirAsia.

Check in at Changi Airport was pretty much a breeze, and all I did was go to the AirAsia counter and showed them my passport. Everything else will be taken care off, and you get your boarding pass fuss-free.

Boarding the signature crimson plane is also pretty straightforward with plenty of staff to guide you, in combination with Changi Airport’s clear designs that lead you to the gate easily. 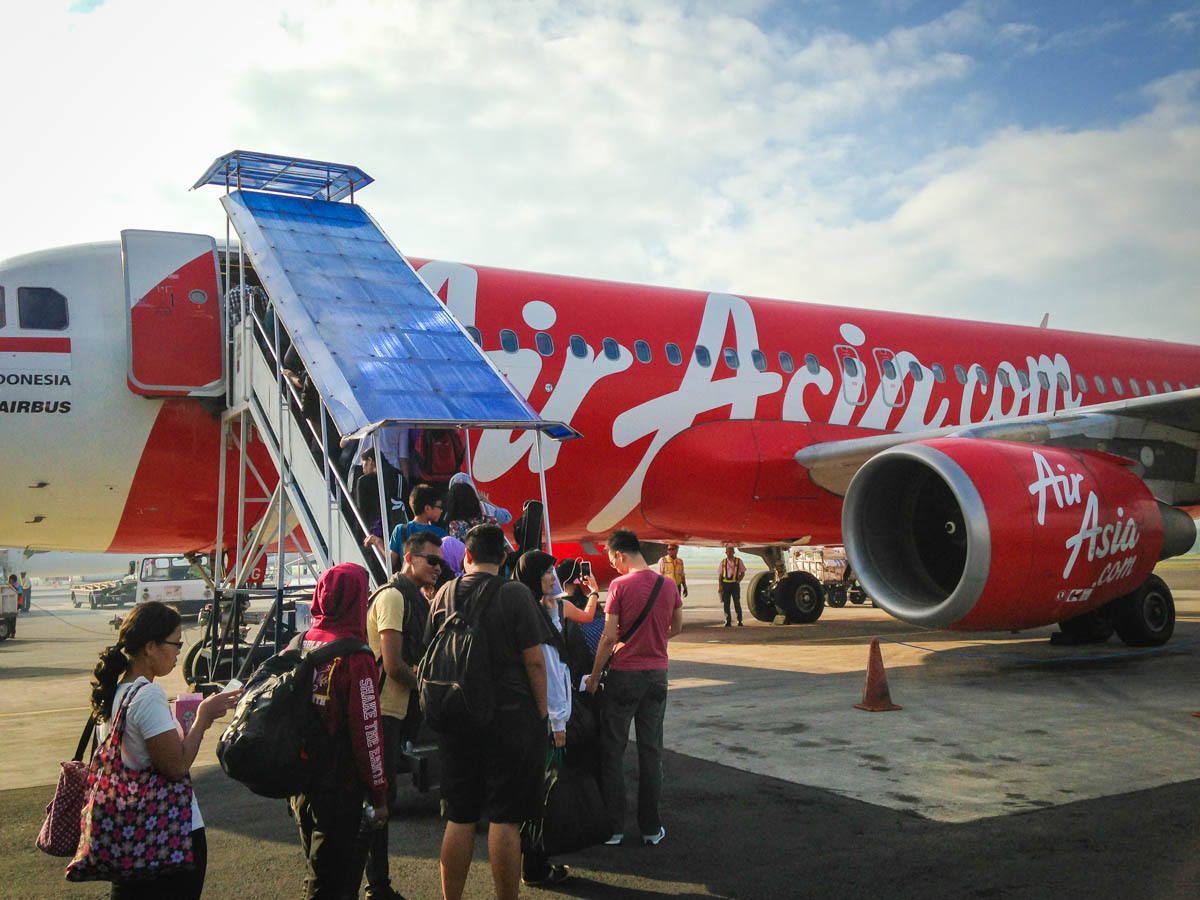 Going to Yogyakarta takes about 2.5 hours, and AirAsia’s seats are pretty comfortable linted with synthetic leather although as with all budget airlines, leg room is quite limited for each seat.

I’m glad the plane doesn’t have any funky smells like some other airlines. Asia Fried Rice with Satay ($5). Whoopee, we get to try the aromatic airplane food too. I know that sounded sarcastic, but I’ve rarely eaten the budget airline’s meals so this was going to be pretty interesting for me.

The fragrant fried rice is fried with chili and shrimp paste, then topped off with fried anchovies and served with 2 sticks of chicken satay. It’s surprisingly tasty, and for some reason the packaging details the exact nutritional provisions of this meal. I guess if you’re watching your carbohydrates, that comes in handy. After a couple hours, we reach our destination: Indonesia, Jogjakarta. The Yogyakarta airport is pretty small, although being the 3rd busiest airport in Indonsia. Borobudur, or Barabudur, is a 9th-century Mahayana Buddhist Temple in Magelang, Central Java, Indonesia. The monument consists of six square platforms topped by three circular platforms and is decorated with 2,672 relief panels and 504  Buddha statues.

Even on this hot sunny day, you see tons of visitors including locals and tourists alike. 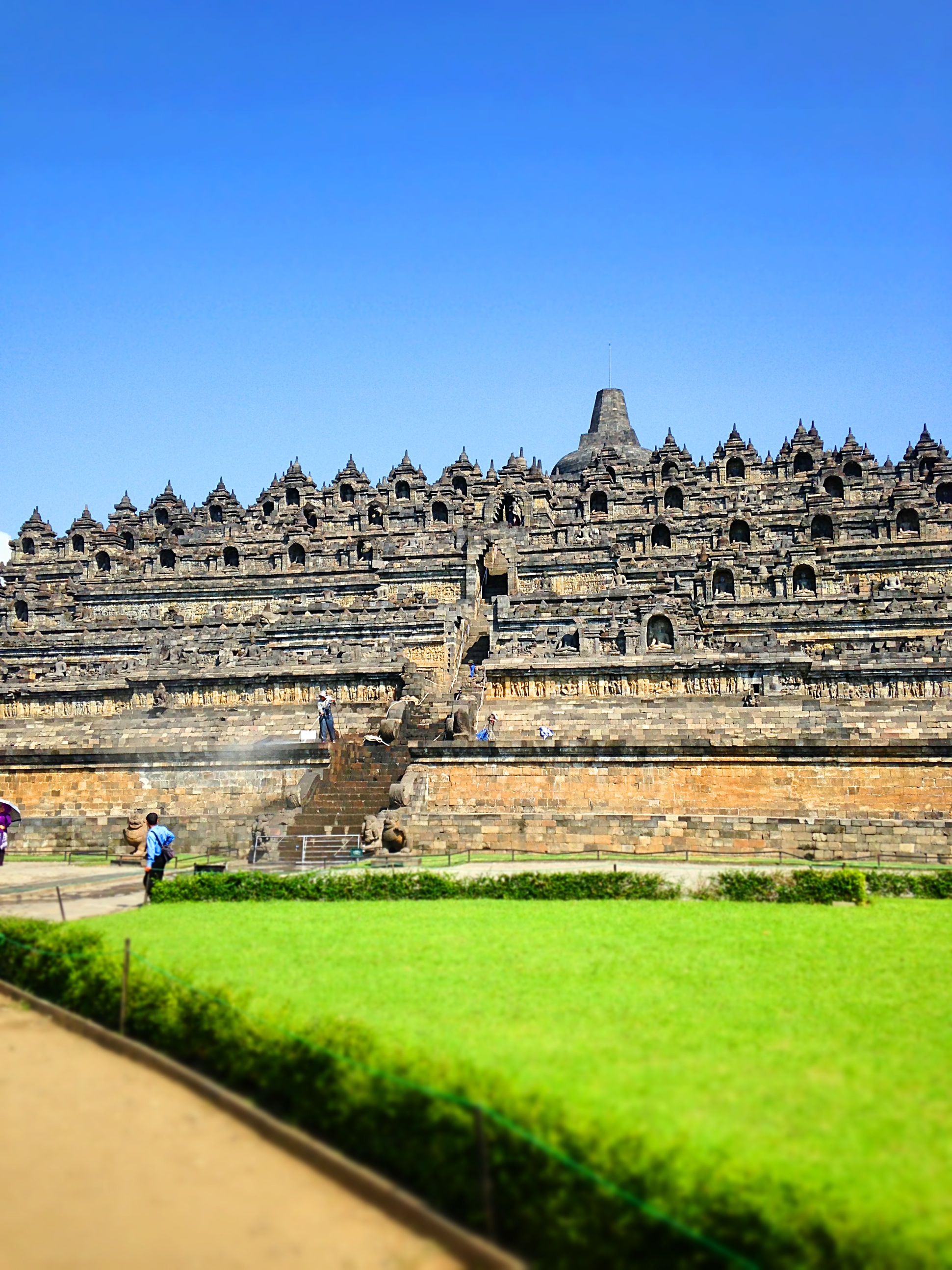 Climbing up along the way, you will see many missing Buddha statue heads that were plundered and sold in the black market as a ‘momento’.

An amazing piece of architecture, the Borobudur temple complex is protected under the UNESCO world heritage list, which also jacks up it’s ticket prices for apparently. Near the temple of Borobudor is Prambanan, which is yet anothe UNESCO heritage site. We visited the Prambanan market which sells trinkets and souvenirs. You won’t see locals buying and stuff here other than the food, which should tell you something. If you really want to buy anything, always bargain. Go for at least half their first price, or just walk off. There is a high chance you’ll see the same thing you wanted at another stall. 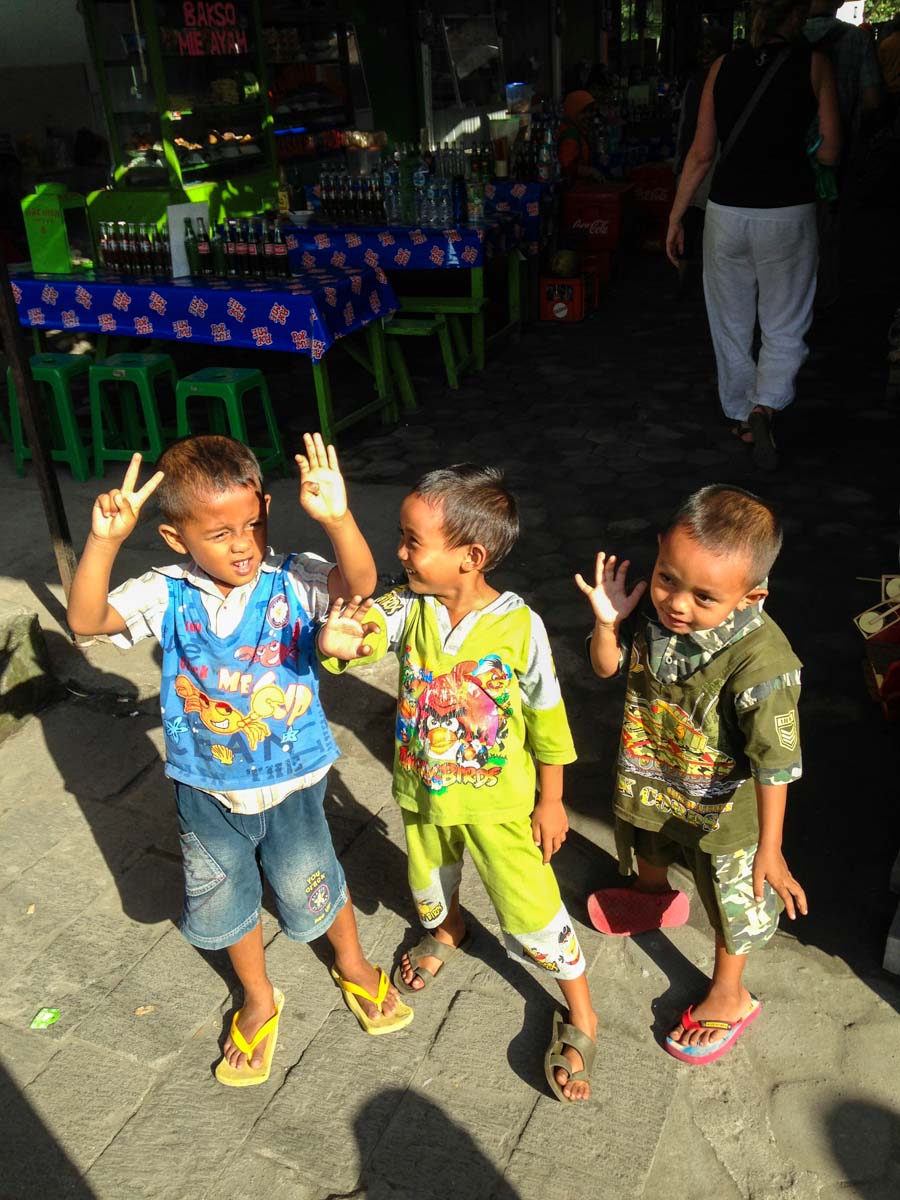 The kids here are surprisingly sporting for photos. I tried the Indonesian ‘Bakso’, at the brave risk of diarrhea on day 1. Sanitary conditions aren’t exactly first class at these stalls. The other bloggers just let me test the waters first, which was a smart move.

Bakso or baso is Indonesian meatball or meat paste made from beef and is similar in texture to the Chinese beef ball, fish ball, or pork ball. The clear soup was probably heavily flavored with MSG with that salty aftertaste, but the balls were pretty decent though, bouncy and soft.

And I guess not getting diarrhea was an additional win! 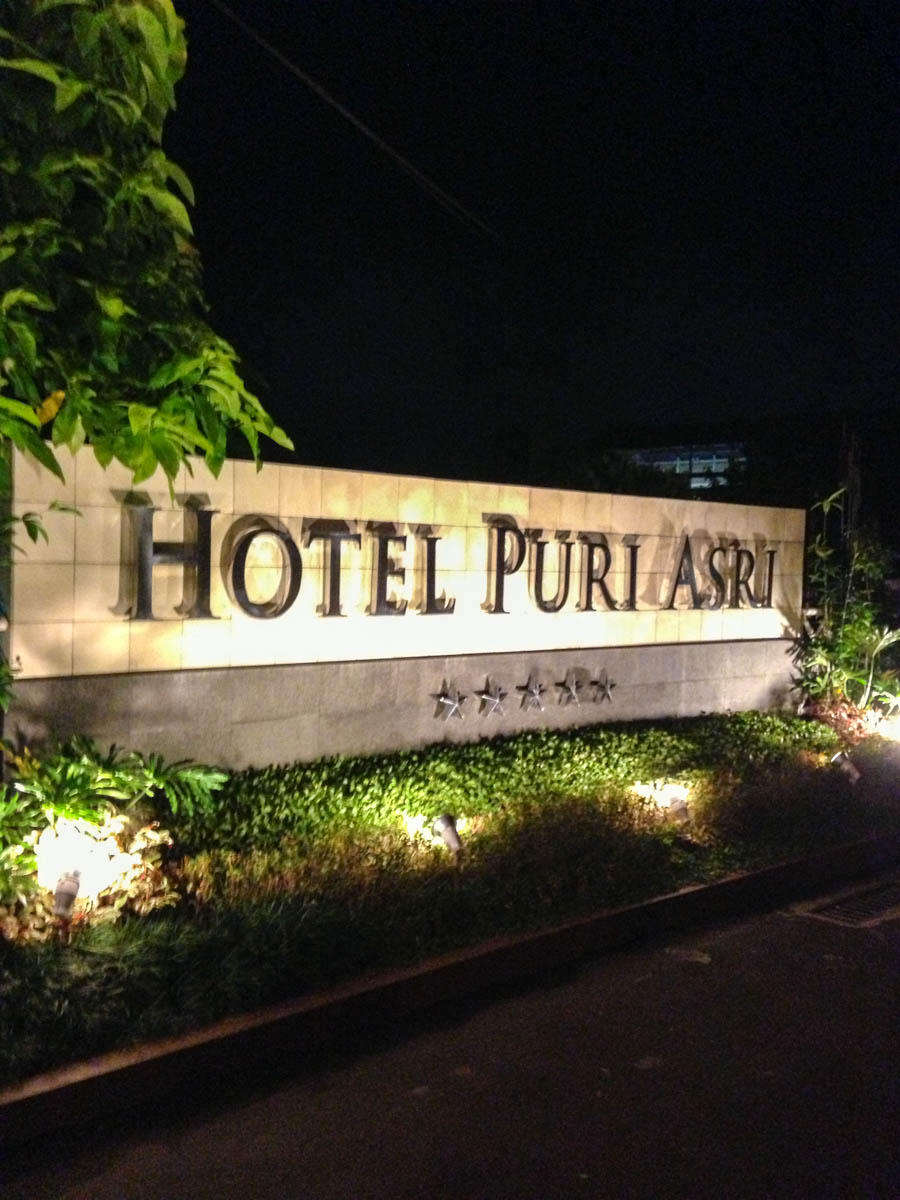 We finally arrived at our designated hotel, which was advertised as being 5 stars on the signage. 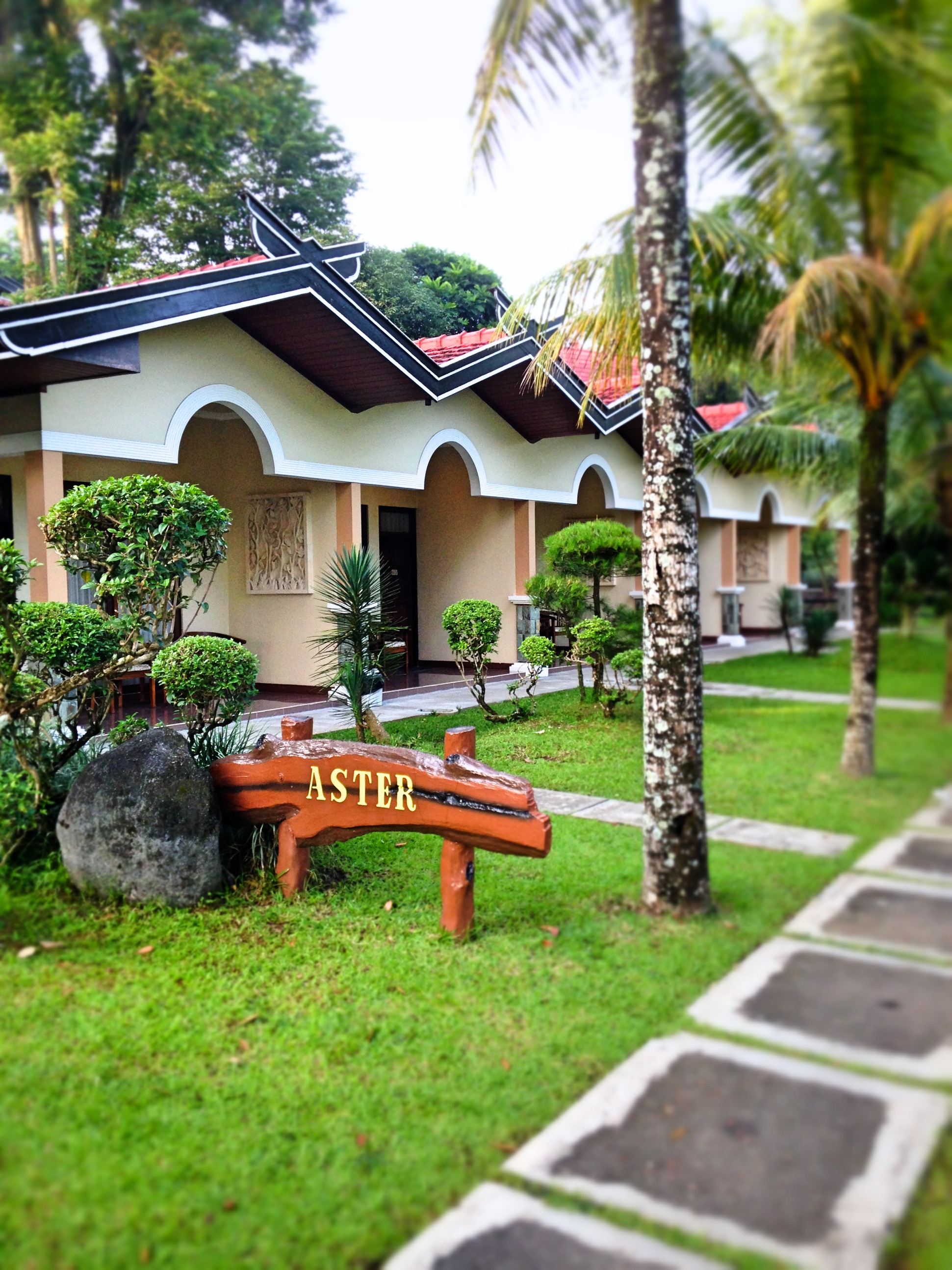 Well, the whole place was pretty big and looks more like a resort or chalet. Rooms were decent, but I would hardly call it 5 stars. Also, I heard some of the other rooms had a problem getting hot water, while we heard weird thumps on the roof at night. Probably one of the many peacocks that were roaming around the compound.

Oh, there as a van that will bring you from your room to any other attraction within the hotel, including the restaurant or lobby. Just hit the call button and the transport appears in about 5 minutes.

Transport around the city itself is quite a pain though, as getting a cab isn’t as easy. It’s definitely recommended to book a driver for the whole day with a set negotiated fee. 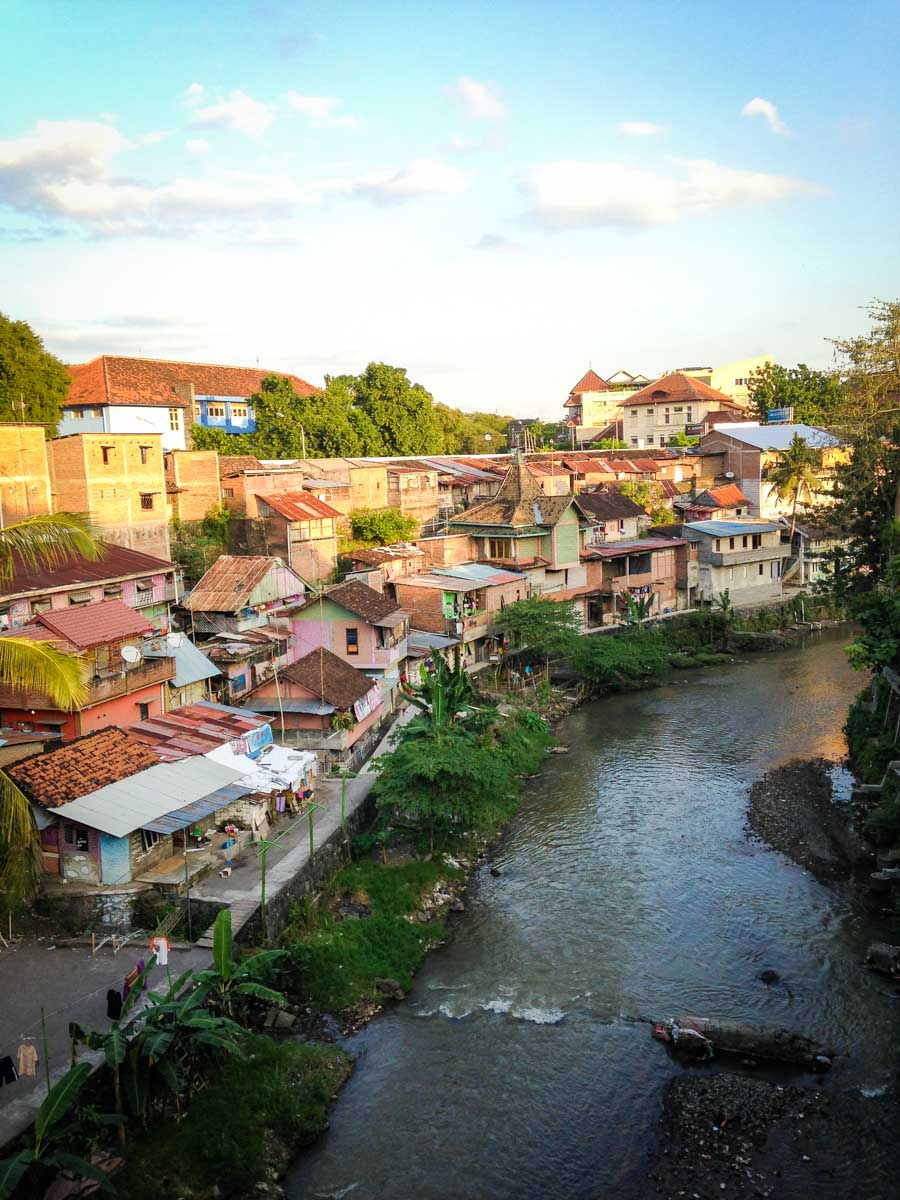 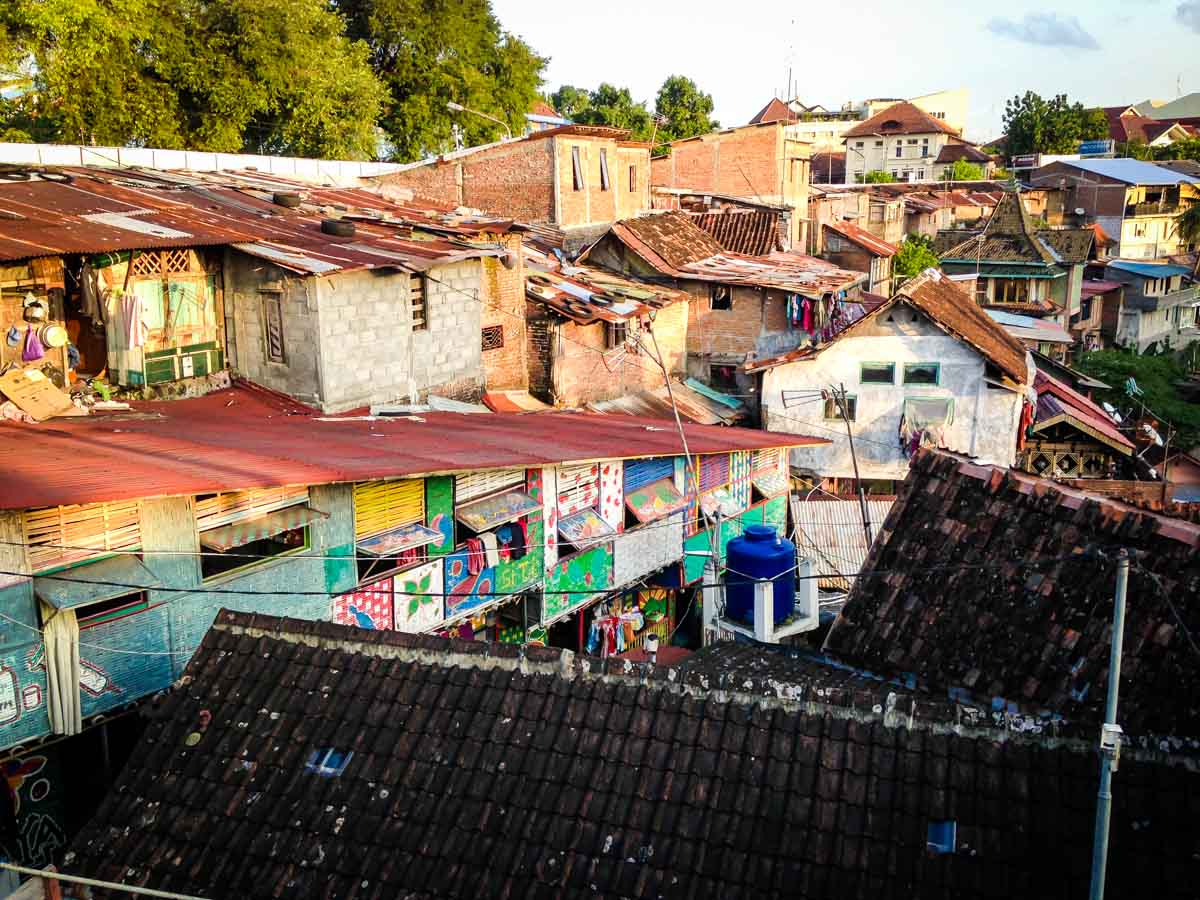 With no set itinerary, we decided to roam the city. We came across this slum-like area near the river, with colorful walls probably constructed by some student CIP program.

This reminds me again how fortunate and grateful I am to be born and raised in Singapore; others have it way harder than whatever first-world problem we are facing. Like our $800 iPhone battery lasting only 4 hours. Oh the horrors. 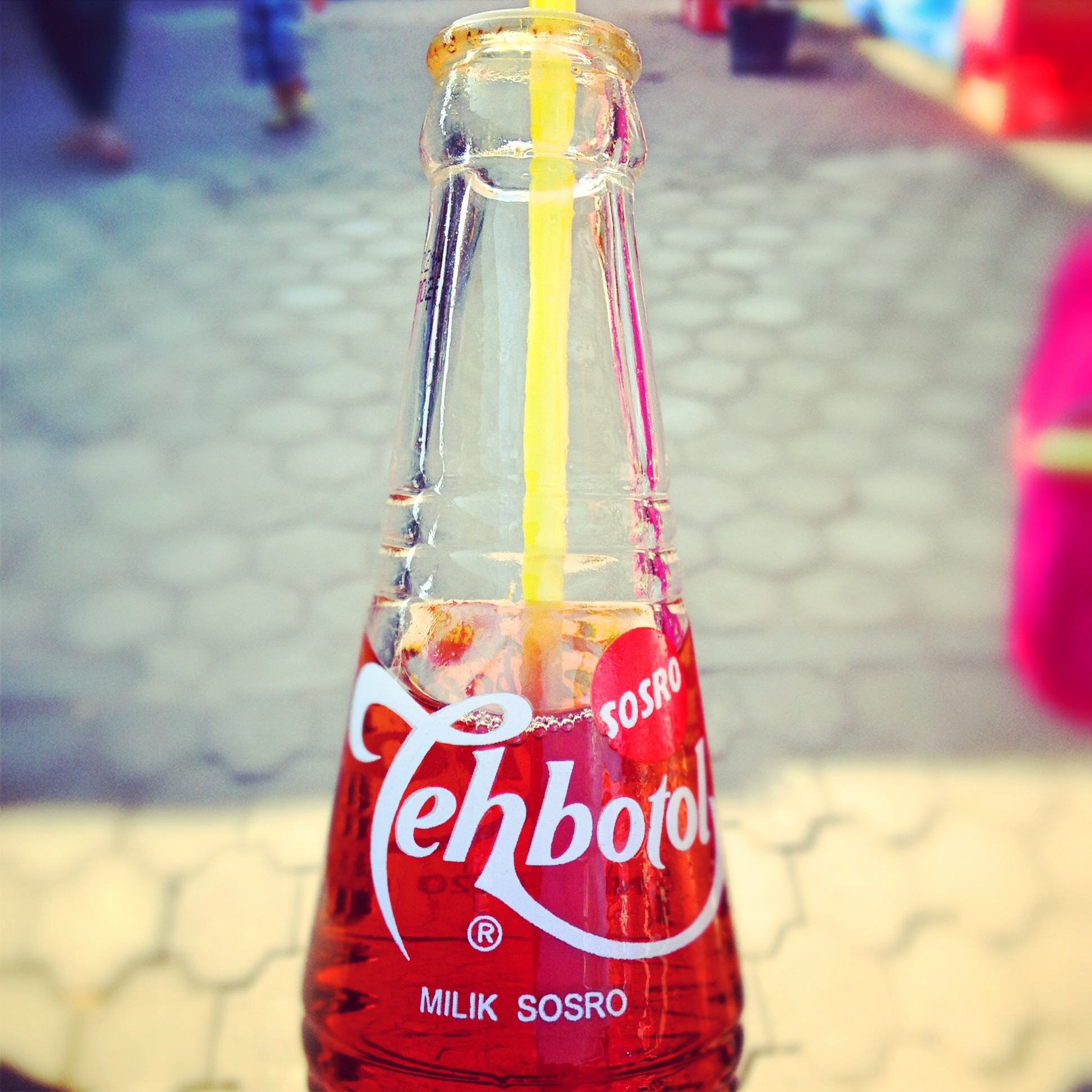 Teh Botol is probably made with the tears of Angels, brewed with tea. Or cocaine because this was crazy addictive. I pretty much only drank Teh Botol during my entire trip for my daily water requirements.

And for some reason, glass bottles always make drinks taste that much better. Gudeg Sagan is ranked the 12th best restaurant in Yogyakarta, and also awarded the Certificate of Excellence in 2013 by Tripadvisor. There’s no way I’d come to a foreign country without trying authentic local food right? Luckily we had along Catherine who speaks a variant of Malay, or the Indonesian menu would have been the same as reading Elvish- I can’t do either. But basically you just pick ingredients, like Chicken thigh or butt, eggs and Gudeg (young, unripe jackfruit traditional to Jogja) etc which they then serve on rice.

The chicken was very soft, tender and falls off the bone. Seasoning wasn’t too salty or anything either. I like the wet gravy soaking in my rice as well. The gudeg on the other hand, although flavourful, pretty much burned my tongue off with its spiciness. Approach with caution.

The open air restaurant even has live singing performances, who can do English songs! A very authentic and delicious experience. Recommended to visit. 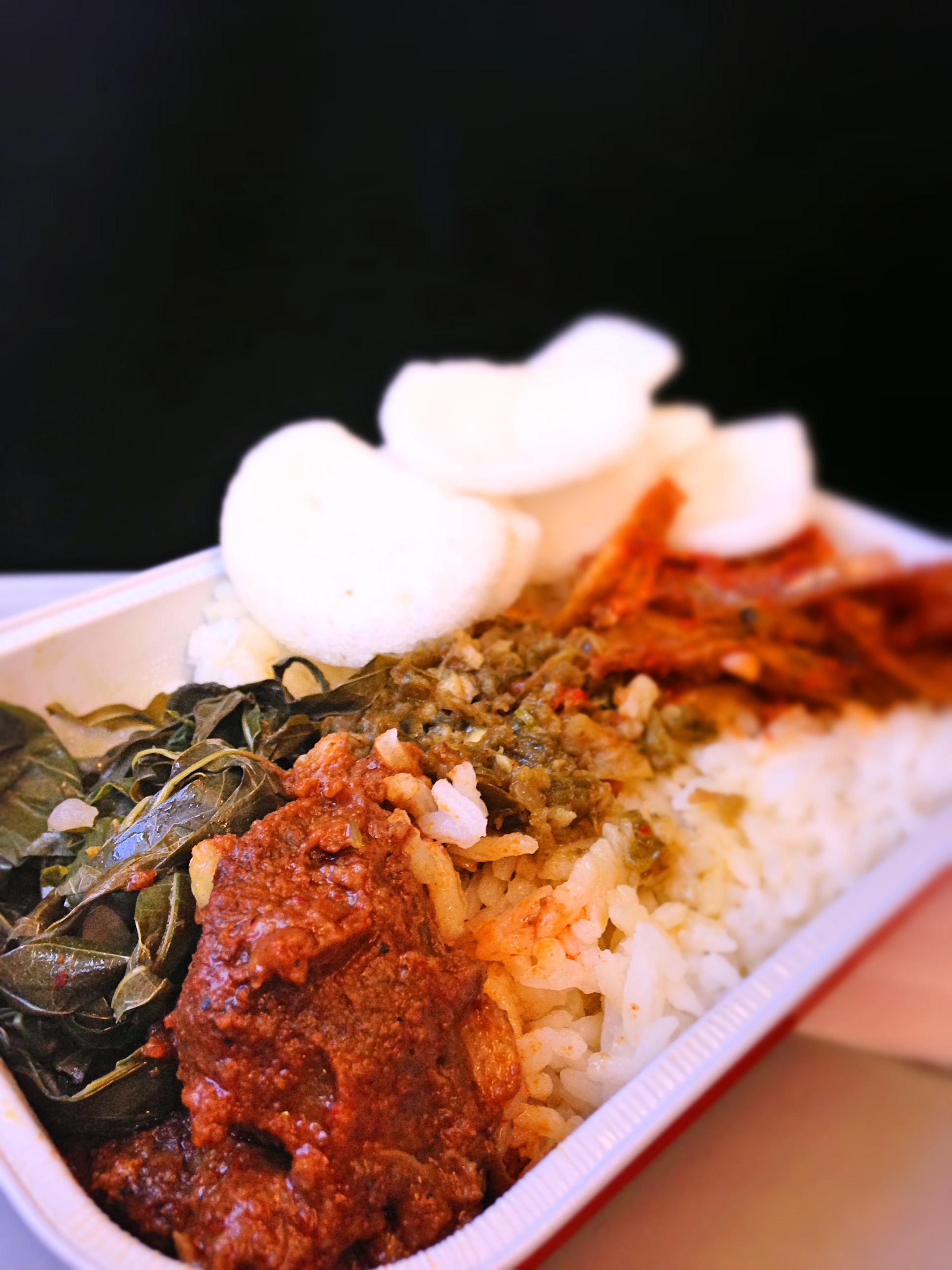 Nasi padang ($5). On the way back on AirAsia, we got to try another in-flight meal.

Nasi Padang is a popular meal from Indonesia which is normally served with a mix of side dishes. This variation has white rice, beef rendang, stir-fried cassava leaves, ikan bilis ,balado and green sambal. Accompanied with prawn crackers.

Although not the best looking dish, taste-wise was adequate. Worth the $5.

Well that’s about it for this post. Originally I wasn’t going to post this article as I was the +1 with Bryan from Thesmartlocal, which meant I technically didn’t need to write. I decided to do it anyway though, but this won’t be as detailed as my other trip reviews, with way lesser pictures, which is a waste.

We spent quite a short time at Yogyakarta given the rushed timing arrangement, and I would have loved to explore the city more. I will definitely come back another day to fully appreciate this simple city.