You most probably have heard about or patronised the popular Bai Nian Niang Dou Foo stall, which offers yong tau foo that is different from the Hakka-style we are familiar with. 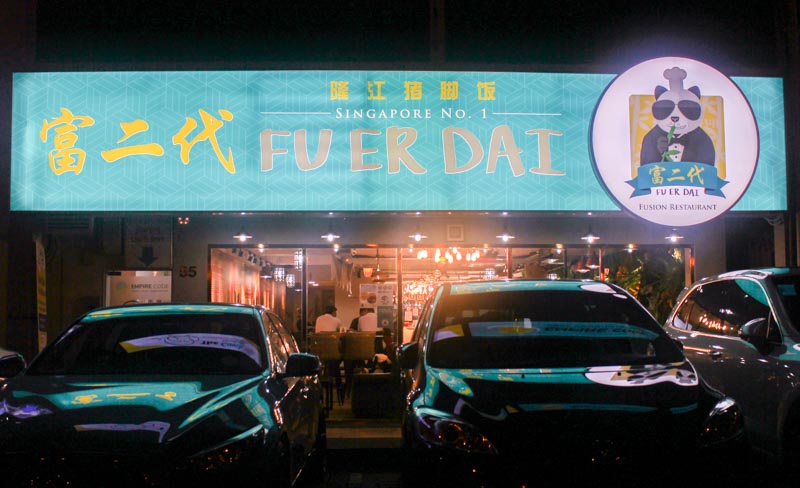 Enter Fu Er Dai, which was founded by the second generation of the Bai Nian family tree. Fu Er Dai (富二代), which translates to “rich second generation” in English, embodies Nicholas’ vision for the restaurant. Having grown up in poverty, he hopes to cultivate a future of wealth through his business, allowing the next generation to grow up with a stable life.

It’s a family affair, with his cousin (right) playing a role in the operations of the business too. 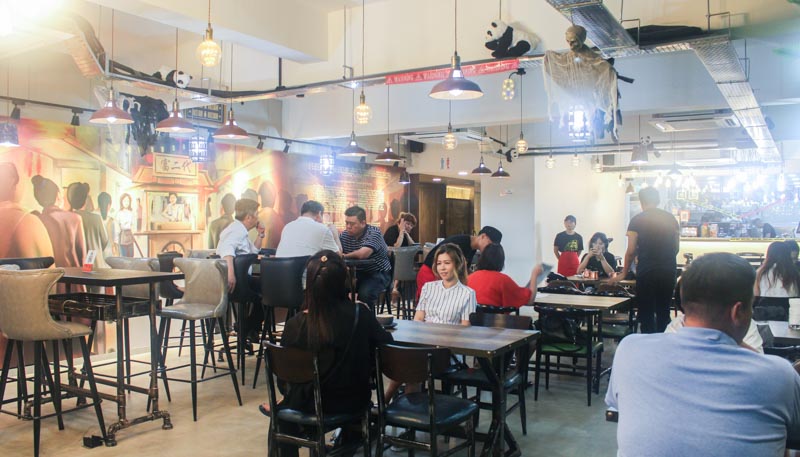 The restaurant boasts a modern and young atmosphere, with a brightly lit interior, wall murals and lush green decor. 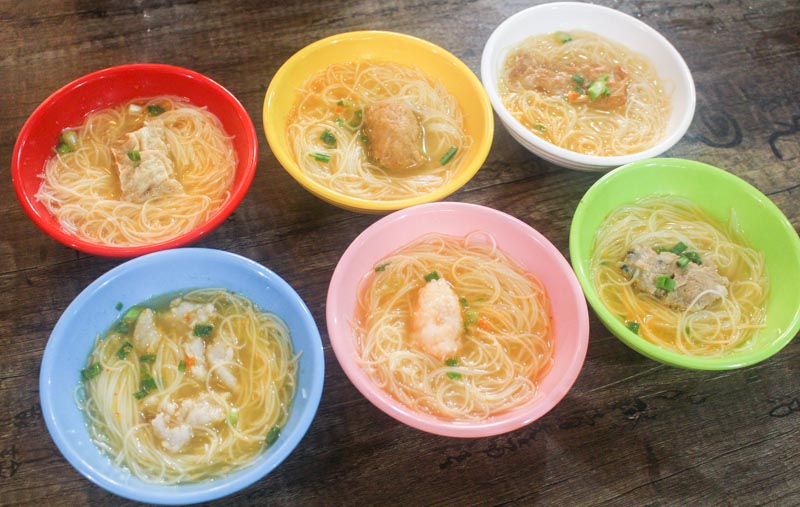 I took a quick glance around the restaurant, and saw a table stacked with colourful bowls of yong tau foo. Not wanting to be too ambitious, we just got one each of the six options offered in the spicy soup option (S$0.90 per bowl) to try. 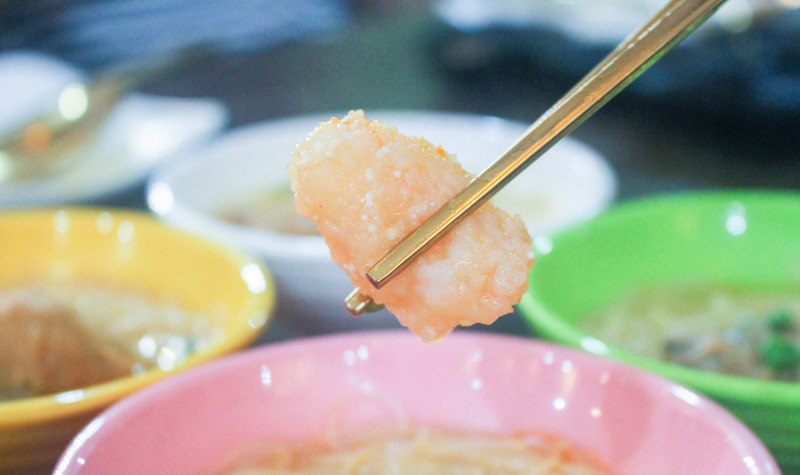 First up, we tried the bowl with prawn. I was not expecting such a big piece (around the size of my thumb!), and it made that one bite so much more hearty. The meat was firm yet oh-so-tender, with a soy sauce type of saltiness to it. 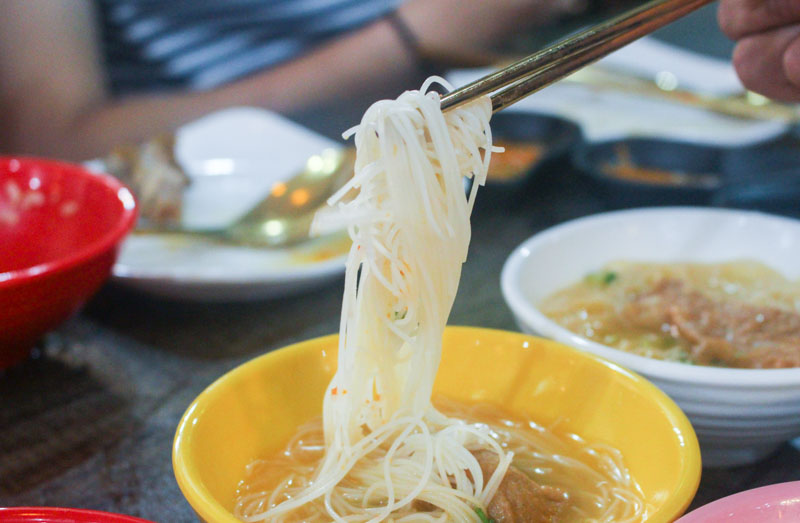 It was your standard bee hoon, but having it in a tiny bowl made it so much more fun to slurp up. Take care while drinking the soup though, because the spice was quite strong. 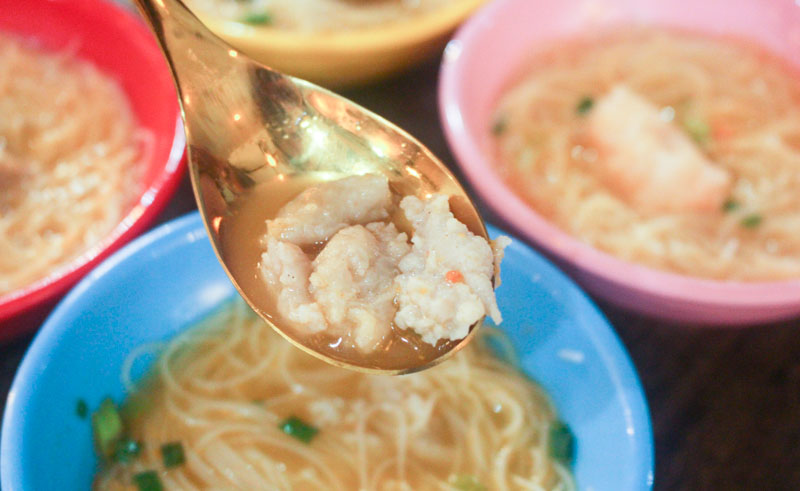 Next up, we had the pork pieces which seemed pretty unassuming, but they were meaty and melt-in-the-mouth kind of soft. They offer a sliced pork option too, which had a firmer texture but still remained tender. 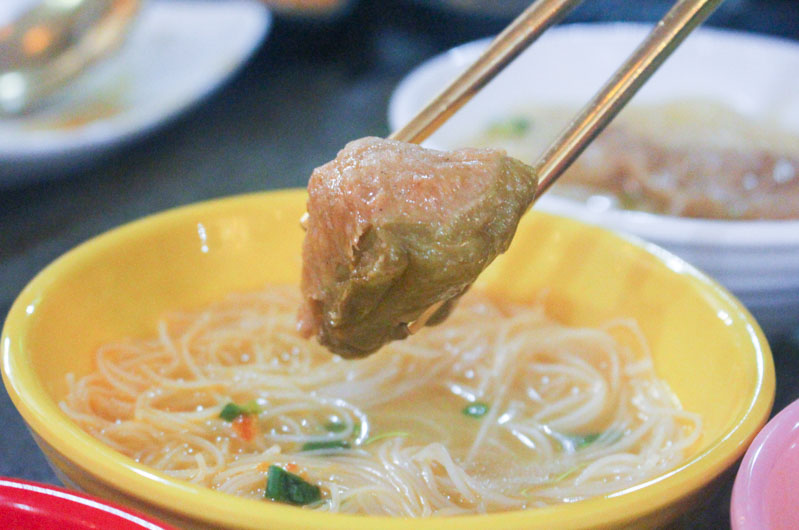 Unlike your usual bittergourd that comes with a fishcake centre, theirs is paired with a pork filling wrapped in beancurd skin. The meat was dense and full, and its savouriness matched well with the bitter vegetable. 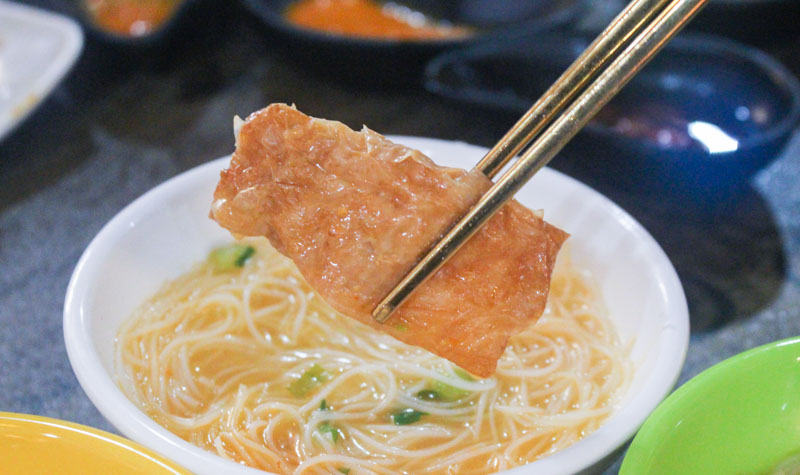 There is also your standard fish paste wrapped with beancurd, providing a combination of textures with smooth filling and chewy skin. If seafood is not your thing, there is also another option where they use pork for the filling instead.

After we kick-started our appetites with the mini yong tau foo bowls, we were ready for the main dishes. 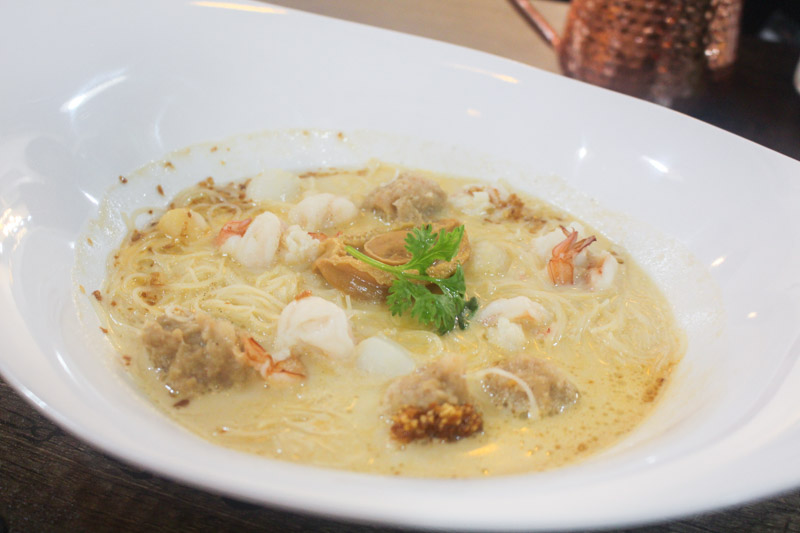 As the bowl of Abalone Cheese Beehoon (S$17) landed on our table, I got a whiff of a cheesy aroma.

Adding cheese to a dish like bee hoon can either be a hit or miss, and I’m glad to say that this was one creation I enjoyed. 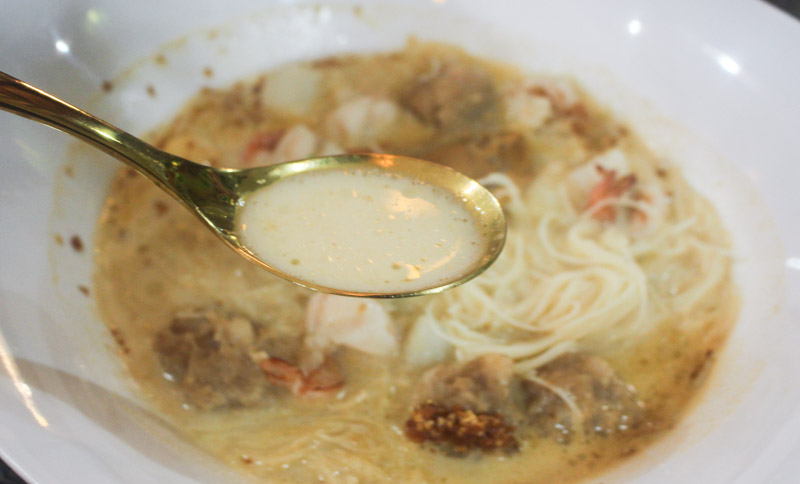 As I took a sip of the seafood broth, I found its milky but light texture to resemble fish soup. The richness of the cheese helped to add a creamy and savoury flavour to the dish, without being too jelak. 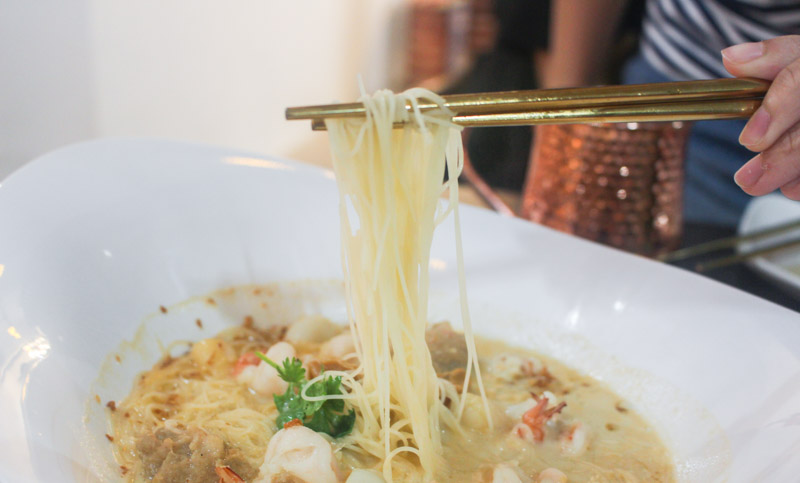 The bee hoon may taste pretty ordinary on its own, but after absorbing the cheesiness of the broth, it became much tastier. 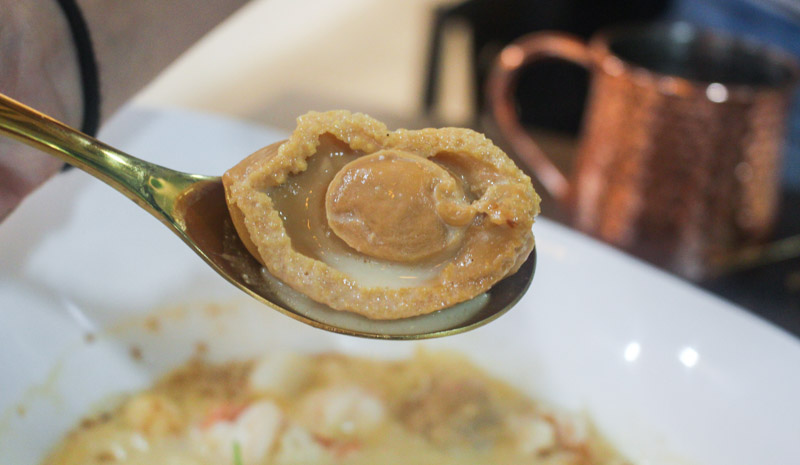 Although we were only given one piece of abalone, the sea delicacy was big and chewy, with a natural sweetness to it. 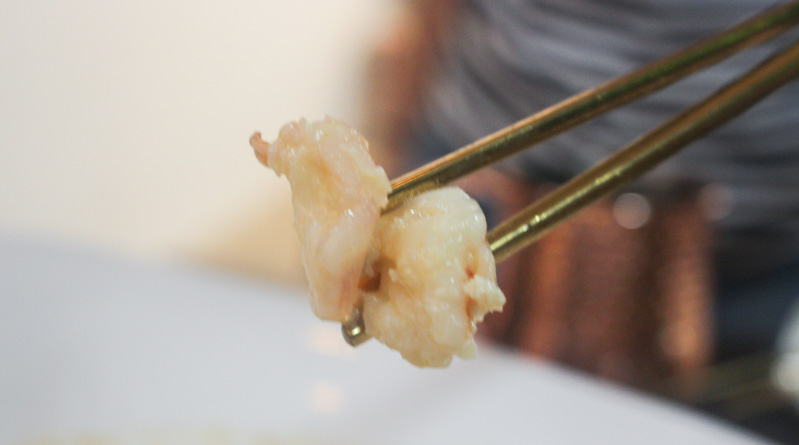 I was able to look forward to a handful of decently-sized peeled prawns though. They were fresh, with a springy bite to them.

So far, the quality of their seafood did not disappoint, and that went for the scallops as well. The shellfish was tender and not rubbery, and while I wished they were bigger, they were delightful nonetheless. 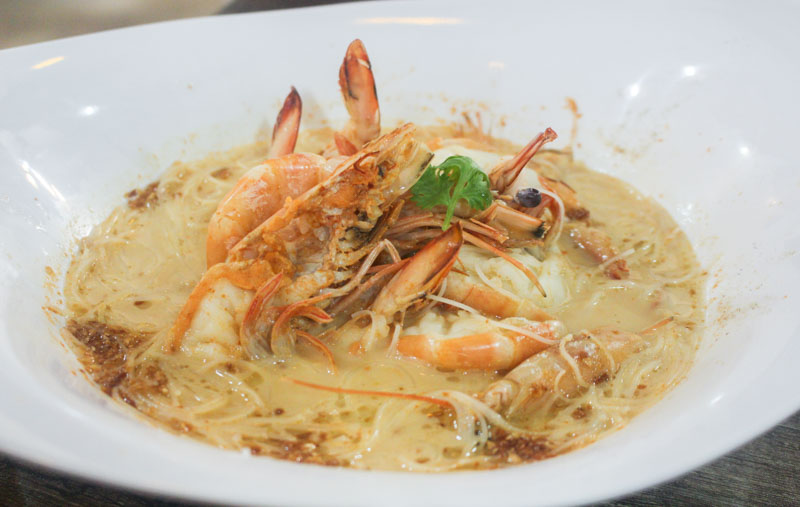 We also got to try the Big Prawn Cheese Beehoon at S$16.

I was expecting a similar cheesiness from the soup, but I was greeted with a different, rich flavour that’s reminiscent of my favourite lobster bisque instead. 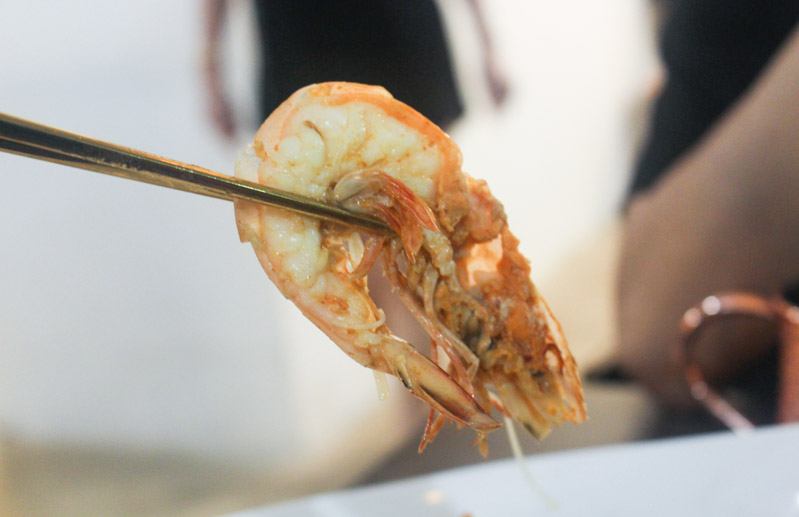 I certainly appreciated the huge prawns, and we found at least four pieces of them. They came with the shells still on, but were easy to peel. They were firm and juicy too!

It’s not often that you get quantity and quality in the same bowl, so I think S$16 is a pretty value-for-money option. 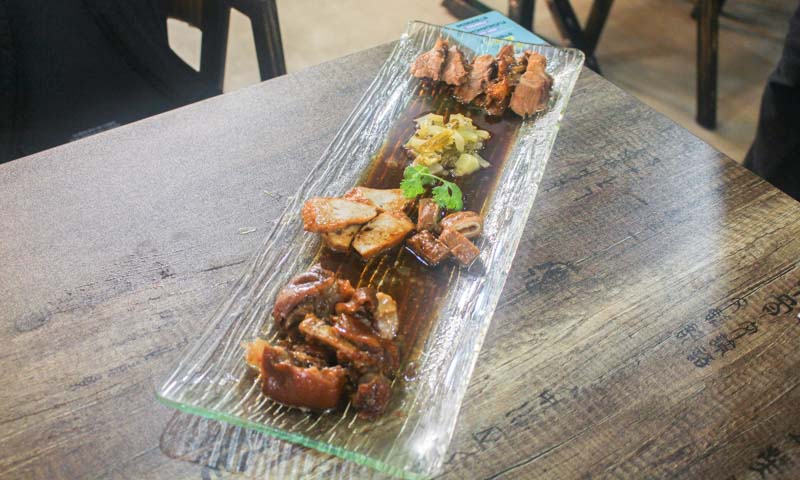 We were also recommended the Pig Leg Rice (S$8), where the ingredients come presented separately, with an accompanying side bowl of rice. 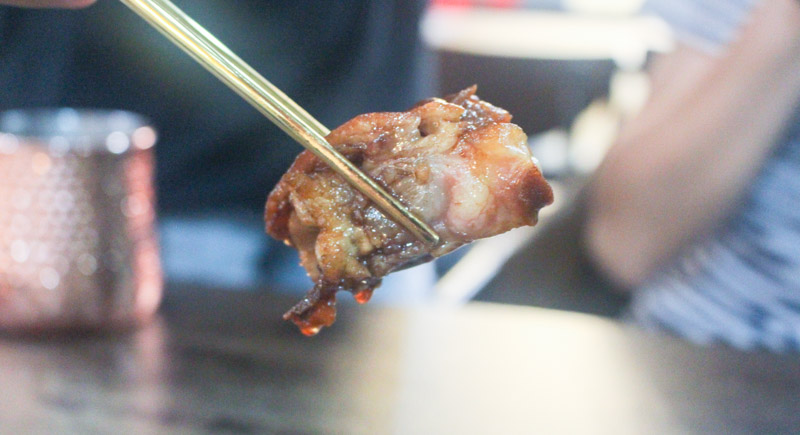 I’m not a huge fan of pig trotters because of how the bones and fat get in the way of the meat, which is why I liked how it was served in a deconstructed form.

I’m not the biggest fan of fatty skin, but I have to say, it was smooth, tender and nicely coated with a lip-smacking sweet and salty braised sauce. 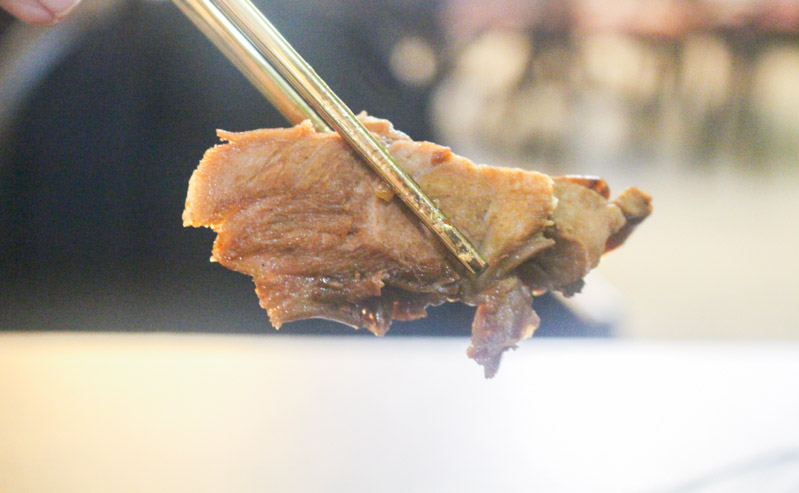 The pork was on the tougher side, but the greasiness of the braised sauce can help a little in making the meat less dry. 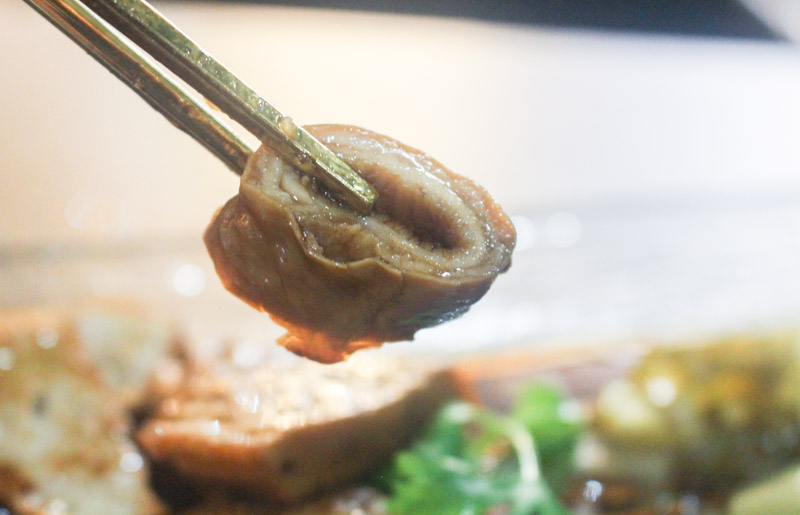 If you’re someone that shrivels up at the thought of eating intestines like I do, these ones surprisingly did not taste like one. They were soft and chewy, and I could have almost mistaken them for something like beancurd skin.

I still felt like I needed a palate cleanser afterwards though, so the firmness of fishcake helped to balance out the squishy texture of the innards. 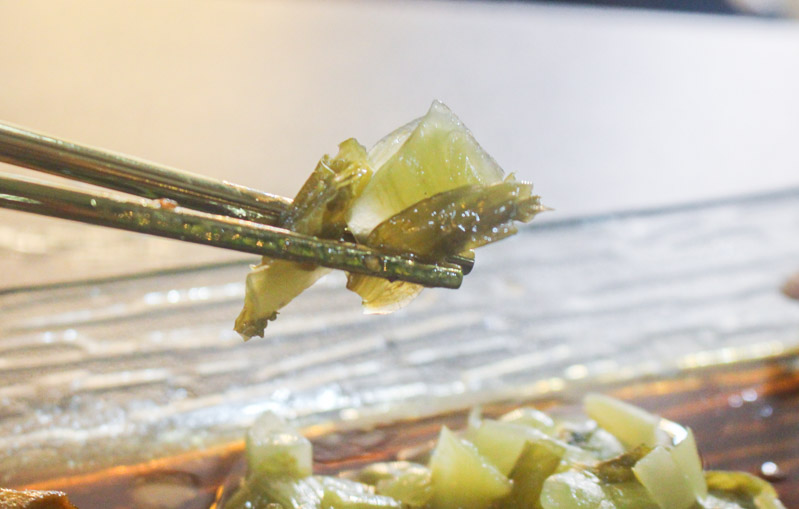 I enjoyed the savouriness of the dish, so don’t get me wrong, but having some of the crunchy, salty and sour pickled vegetables was a good way to refresh my taste buds.

I thought this was a nice twist from your usual pork and rice on a plate, but it’s a little pricey at S$8.

Despite having never tried Thai boat noodles before, I still understand the appeal of bite-sized yong tau foo–which was fun, addictive and tasty.

If you’re a lover of cheese in bee hoon, I would definitely recommend trying their Abalone Cheese Beehoon, which is both worth your money and stomach space.

I don’t live in the North-East, but the time taken to travel to Fu Er Dai was not a waste!

If you live in the Serangoon area, you should definitely consider checking out Fu Er Dai for their bite-sized yong tau foo and value-for-money seafood dishes.

Previous articleInspiring Heroes: Innovative App Lets You Donate A Meal Every Time You Check In At A Restaurant With TangoTab & The Food Bank Singapore
Next articleTong Xin Ru Yi Traditional Hotpot: SG’s Only Hotpot Place That Serves Soup Bases With Ingredients Already Included At Boat Quay