I recently discovered a hidden gem located on the second floor of Beauty World Plaza called Bosong Rice Cake. This small takeaway shop is run by a native South Korean ajumma from Yoju, which dishes out different kinds of handmade tteok (rice cakes) at just $5— ranging from two large pieces to nine small ones per box. Tteokbokki is a savoury Korean street food that’s served with spicy gochujang (chilli paste) sauce. It’s extremely popular amongst Singaporeans who embrace Korean culture. Finding a place in Singapore that sells the sweet version is like a needle in a haystack— I’m really glad I found them at Bosong Rice Cake! Bosong Rice Cake produces Korean tteok with several kinds of traditional fillings and flavours. It’s helmed by 52 year old, Mrs. Jo Ja Young, who arrives at five in the morning— the rice cakes are made fresh! Her 19 year old son, Min Sung, helps her out with the packing and selling at the shop whenever he is free.

What I tried at Bosong Rice Cake There were around 12 different selections of tteok displayed in front of us. My colleagues  (Rachel and Eugene), and I were clueless on what they were. Min Sung, who sounds so much like a local Singaporean himself, explained to us what each of the rice cakes were. Mrs. Jo was a little shy but she tried her best to converse using her limited English vocabulary as well— such nice and cute folks! I began my Korean tteok journey with Kkot Tteok (S$5 for 4). They were shaped like miniature cherry blossom flowers decked out in pretty pastel shades like yellow and pink. I was a little puzzled as I didn’t remember seeing them on their Instagram menu page. Min Sung explained that his mum tends to make new products every now and then, thus the menu isn’t updated.

Before sinking my teeth into them, I took a minute to admire how intricately designed the flower shaped rice cakes were— imagine all the time and effort Mrs. Jo puts into dishing out these flower tteoks. 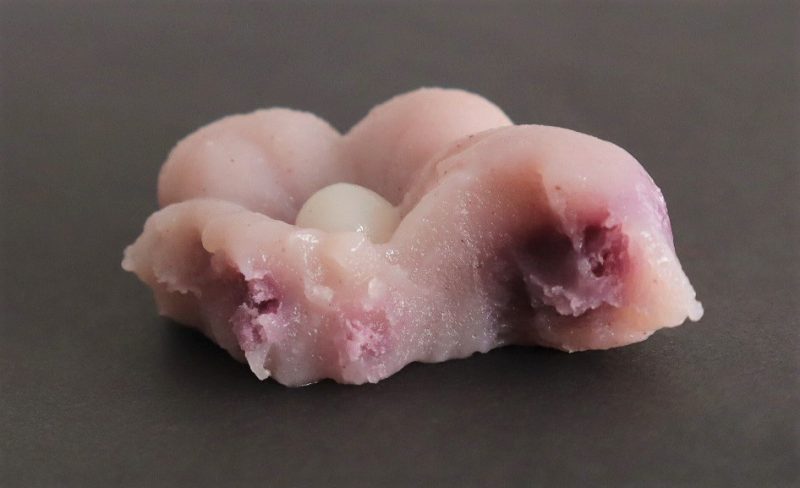 The white and pink variations are stuffed with kidney bean fillings. The yellow tteok has sweet potato while the pale purple one has purple sweet potato. The texture was similar to tteokbokki, chewy and dense. The fillings weren’t that sweet and eating the whole thing reminded me of a chewier version of our local ang ku kueh. Next on my list was Honey Rice Cake (S$5 for 9). The first thought that came to my mind when I saw them was the longevity peach buns with lotus fillings, normally served at traditional chinese birthdays for the older folks. These cute mini tteok even had the same colour palette of pink and white. 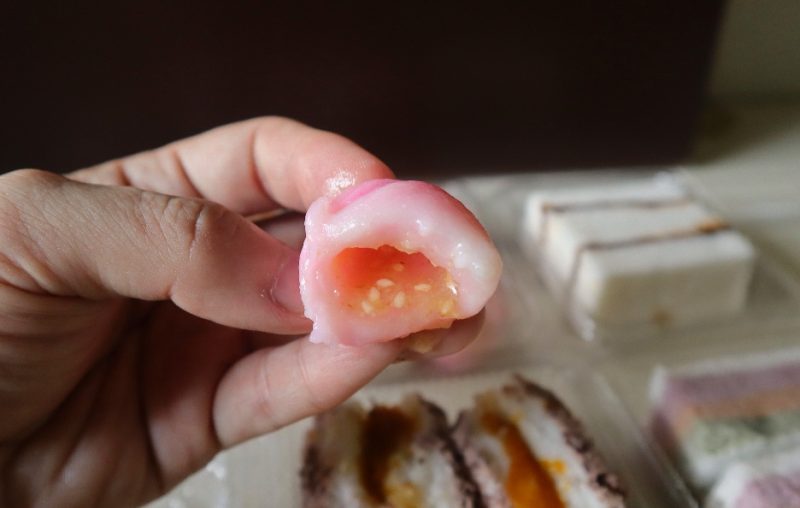 I wasn’t prepared for a mini explosion when I popped one of them in my mouth. I looked at Rachel and told her that it reminded me of sesame tang yuan (glutinous rice balls) while she exclaimed that it reminded her of ondeh ondeh. The insides were filled with flowy sweet honey with a generous amount of white sesame. After having a second piece, my taste buds came to the conclusion that it was a fusion of the two local desserts that I’ve just mentioned. I guess I’ll give them a nickname— ondeh tangyuan! Bosong Rice Cake’s Mujigae Tteok (S$5 for 2) would probably be one of my favourite tteoks in terms of visual presentation. Also known as rainbow rice cakes, the tteok had 4 shades of colour— white (rice), purple (purple sweet potato), brown (cinnamon) and green (mugwort). If you haven’t heard of mugwort, you’re not alone! I found out that it’s a wild herb used by Koreans as a home remedy to staunch bleeding, and to settle stomachs— fun fact!

The texture of the tteok was fluffy yet chewy. Mrs. Jo had just taken it out of the steamer and it was piping hot and soft. She explained that it’s softer while it’s hot but it becomes chewier if it cools down. I had different flavour profiles registering in my head as I tried it, but the cinnamon taste took precedence over the others. Pumpkin Pat Siroo (S$5 for 2) was next, and I was slowly starting to feel stuffed from all the rice cakes I just tried. The outer layer had blended red beans coating the white tteok while the filling had a nice strong pumpkin puree of sorts— reminded me of the pumpkin soup that I used to cook during my chef days! We ended our journey at Bosong Rice Cake with Honey Baek Seol Gi (S$5 for 2). This would probably be one of my favourite tteoks in terms of taste. Min Sung explained that Koreans call it Honey Seolgi, but it actually doesn’t contain honey at all. The filling was actually made of brown sugar, which tasted similar to gula melaka. It would probably be one of the sweeter ones out of all the tteoks I’d tried earlier on. Beauty World Plaza is situated at Upper Bukit Timah and it pales in comparison to its more popular neighbour, Beauty World Centre. Bosong Rice Cake does not receive much human traffic as it’s located at the second floor occupied with maid agencies and several quiet small businesses. Mrs. Jo arrived in Singapore back in 1999 and has been operating Bosong Rice Cake at different locations such as Bukit Batok and Bukit Timah Plaza. Their current shop at Beauty World Plaza was opened in 2018 and they initially relied on their regular local Korean customers who ordered from them online, especially during festive seasons.

Recently, a Singaporean customer did a TikTok video on them and it went viral. Bosong Rice Cake has been receiving more walk-ins from locals ever since, and sales have been improving. Mrs. Jo wants to be known as tteok jib ajumma which translates to ‘rice cake house auntie’. In my eyes, she’s a superwoman. Everything is done by hand and each filling is meticulously prepared by her alone. Bosong Rice Cake only operates from Thursdays to Saturdays for walk-in purchases and online orders. The tteok is also available in bulk by kg and it costs about S$30 – S$45, depending on which you choose.

During the rest of the week when they are closed, she still drops by the shop behind closed shutters to prepare the fillings and settle the bulk orders— she only gets a few hours of sleep at times! It’s rare to see traditional Korean tteok being made in Singapore by an authentic Korean lady. Do drop by Bosong Rice Cake at Beauty World Plaza to experience these unique snacks without purchasing an air ticket to Korea— I assure you it’s worth the trip!