I have always considered myself an avid chilli-eater, one who can take intense levels of spice. I’ve eaten the spicy Korean instant noodles that has made waves all over the internet and admittedly, they were spicy, but not tear-inducing and mucus-generating spicy.

Fujiyama Dragon Curry‘s Japanese curry, on the other hand, was a different story altogether. 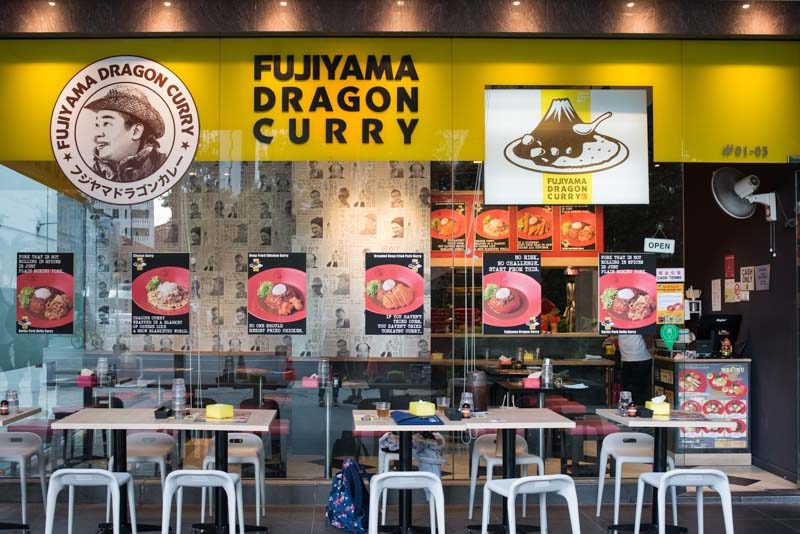 Fujiyama Dragon Curry is a small stall tucked away in a corner of Tanjong Pagar. With limited seating, it is best to get there early to beat the lunch and dinner crowds. 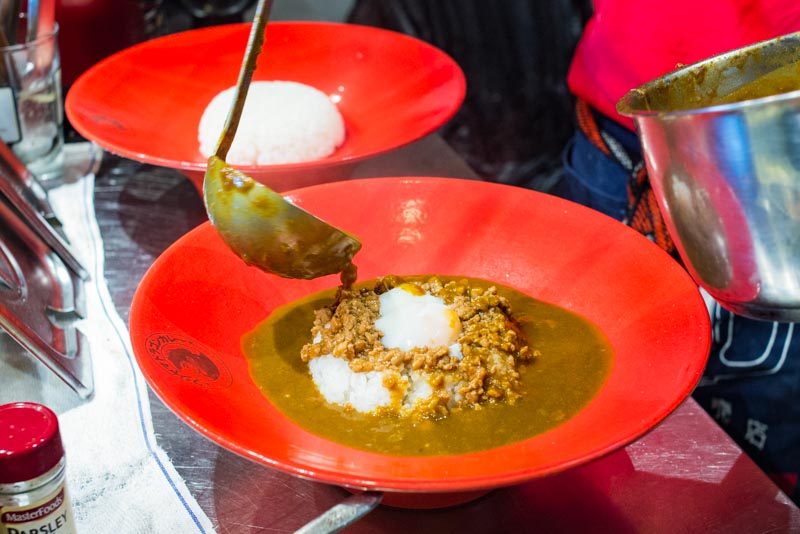 My first venture into the land of Japanese curry that day was the Cheese Curry ($15.70). The spice level is customisable and ranges from one to five, one being original, and five being extremely spicy.

Not wanting to torture myself too much, I went for three on the spicy scale. There was also the option for multigrain rice or tofu, but I decided to stick with good ol’ white rice. 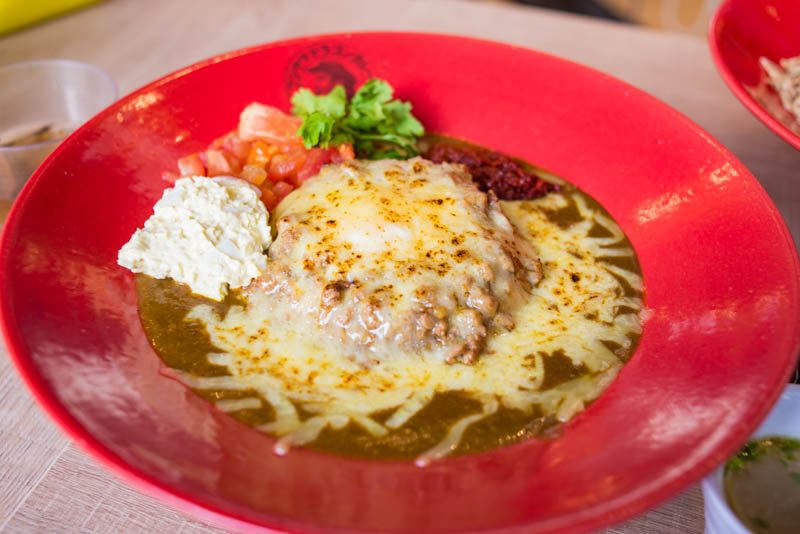 The Cheese Curry comes with a generous serving of curry, melted cheese, some minced meat, rice, and is topped with an onsen egg.

Interestingly, it also comes with a side of egg salad, and tomatoes which, according to Kenta (the owner) are for customers to enjoy while ‘taking a break’ from the spice. The spice level is controlled by the amount of chilli given on the side. 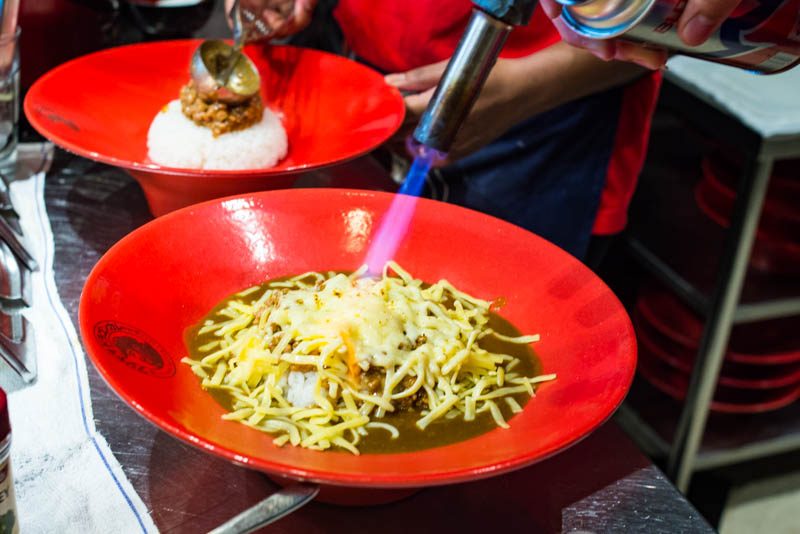 The sight of freshly melted cheese always excites me, and this was no exception. What made it even more interesting was the fact that the cheese was melted with a blowtorch. 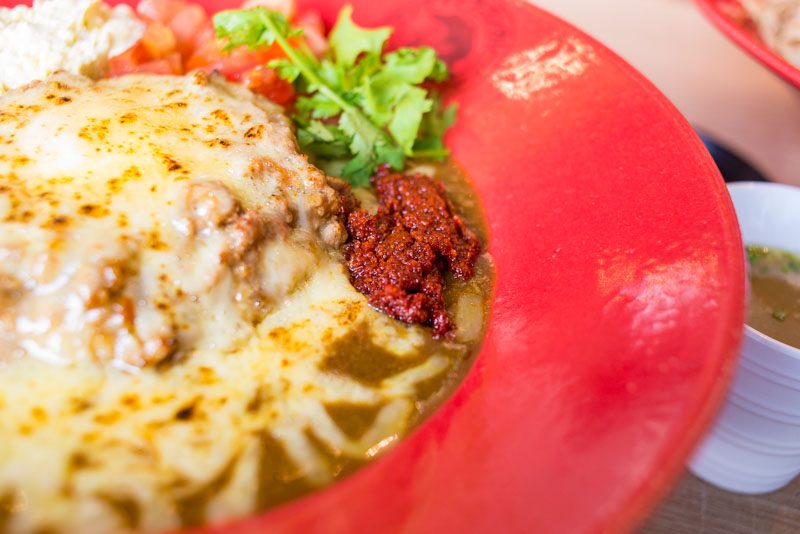 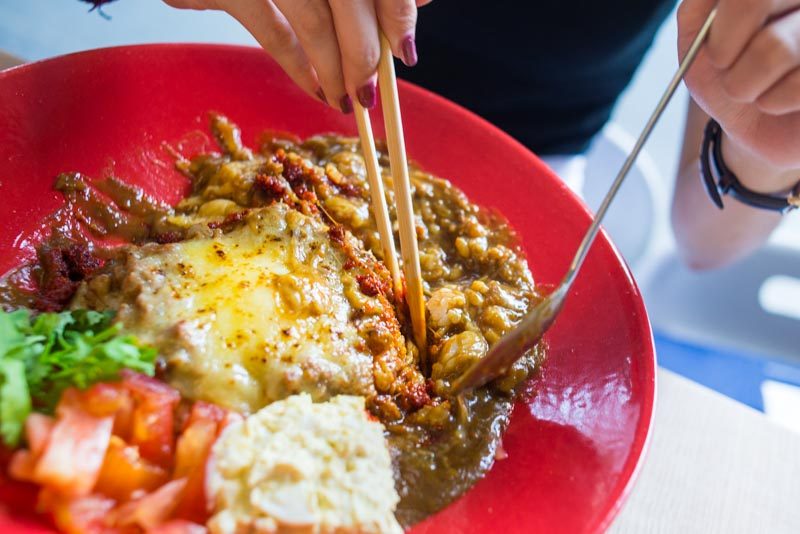 Of course, the dish could only be enjoyed fully once I’d mixed the chilli in. It was rather exciting to mix everything and be able to see strings of cheesy goodness as I worked my way through.

After much work, I was finally able to take my first bite. And goodness me, it was quite a surprise. The spice did not hit me immediately, but as I chewed, this numbing sensation started to gnaw at me and before I knew it, my mouth and throat were on fire.

It was not unbearable, but it was certainly spicier than I had expected. To think I almost chose a spice level of five, thank goodness I didn’t. 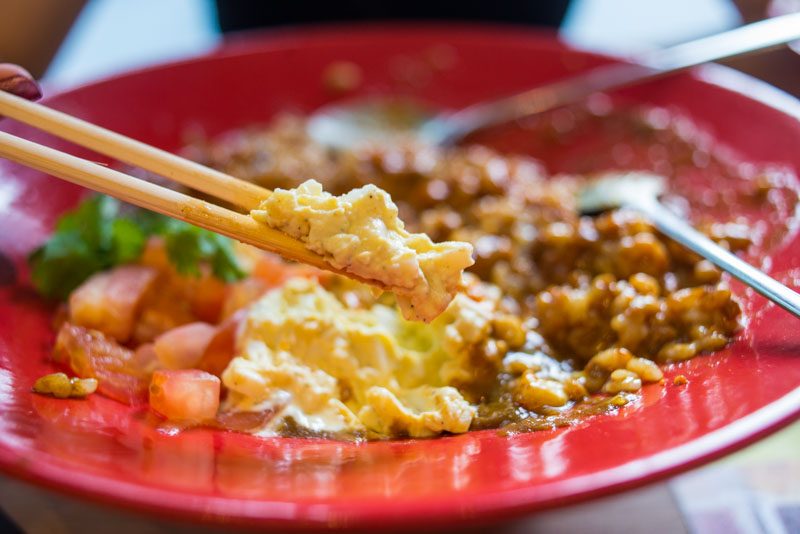 Thus I was incredibly thankful for the egg salad that allowed me to take a spice break. The salad was made with hard-boiled eggs and a little bit of onion – quite the delicious combination.

The curry itself was fragrant, but a little too thick for my liking. Although I liked the gooey texture that the cheese added to the dish, the whole thing became rather chunky and a little tacky after a while, which wasn’t particularly enjoyable. So it’s definitely a dish that must be enjoyed quickly! 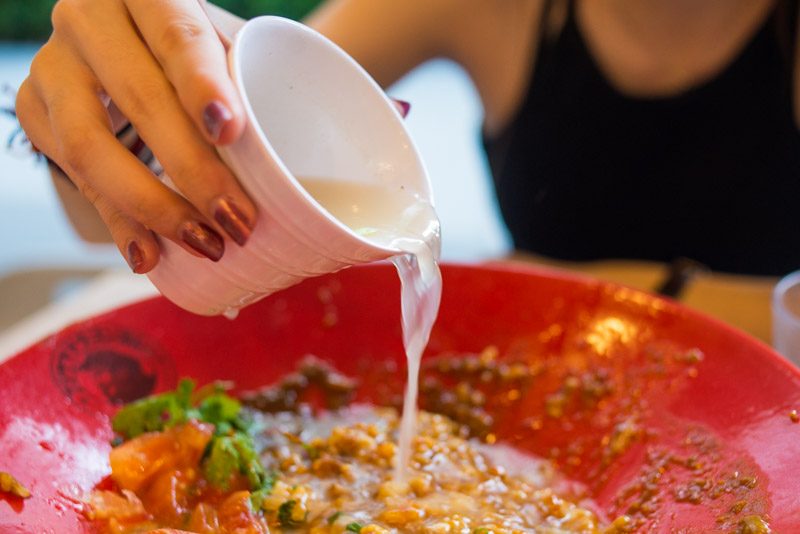 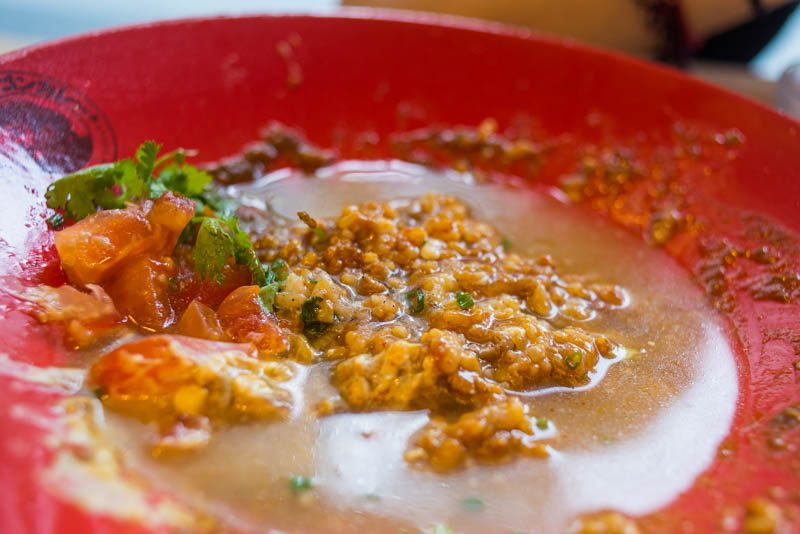 But here’s what I really came here for – Fujiyama’s Dragon Curry has an interesting feature. After you’re about halfway through your meal, you can pour something called ‘Paitan soup’ (it’s chicken-based) into your leftover rice and curry to form a sort of curry-rice soup. 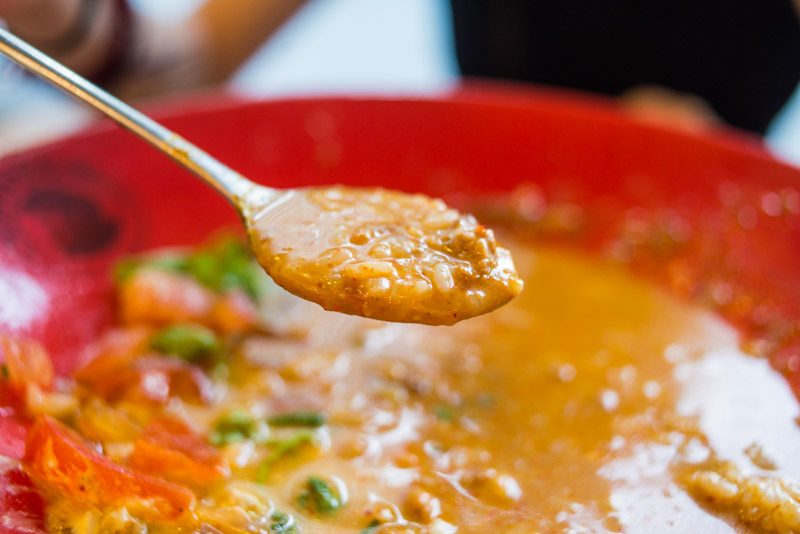 I thought the concept was unique, but after having a taste, I found that it was not anything spectacular. Yes, pouring soup into your rice to form a different dish of sorts is undeniably fun, but taste and texture-wise, it was just diluted curry with rice.

But it may have been because I poured the soup in a little too early, and the curry-soup ratio was not ideal. So if you ever try this, perhaps eat more of the dish than I did before adding the soup in. 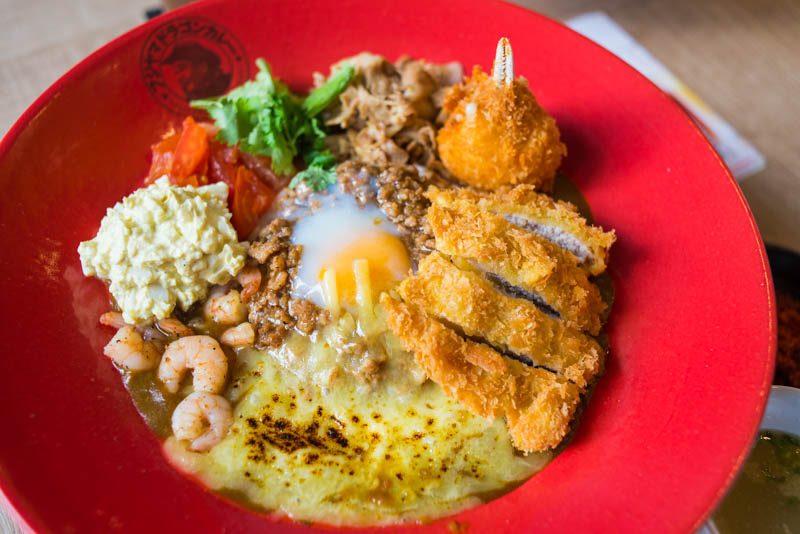 As if one huge bowl of curry rice wasn’t enough, I ordered the All Topping Wild Curry ($16.80) which, as its name suggests, comes with every topping they have available. This includes crab cream croquette, garlic pork belly shabu, ebi, pork tonkatsu, cheese and minced meat. It is also topped with an onsen egg.

For this bowl, I chose a spice level of one, which comes without the chilli. To say the least, it was certainly easier to swallow. 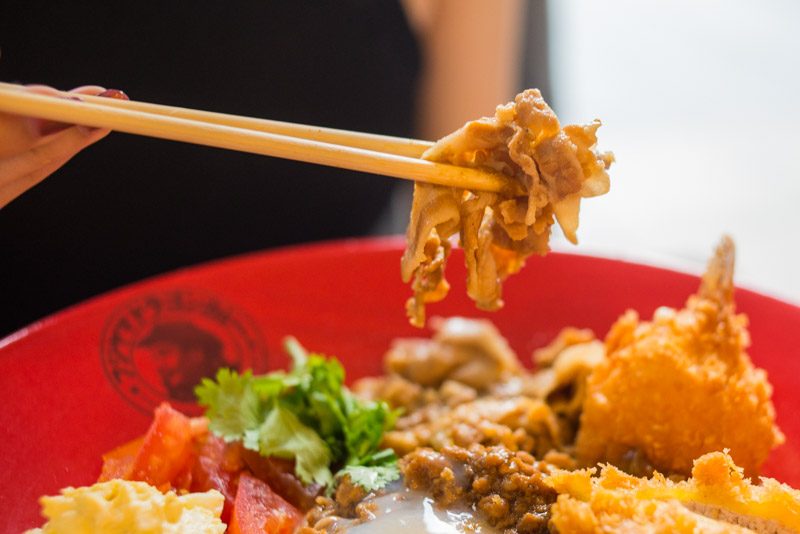 Out of all the toppings, my favourite was the garlic pork belly shabu. It had a sweetness to it that balanced the strong garlic flavour, making it extremely palatable. 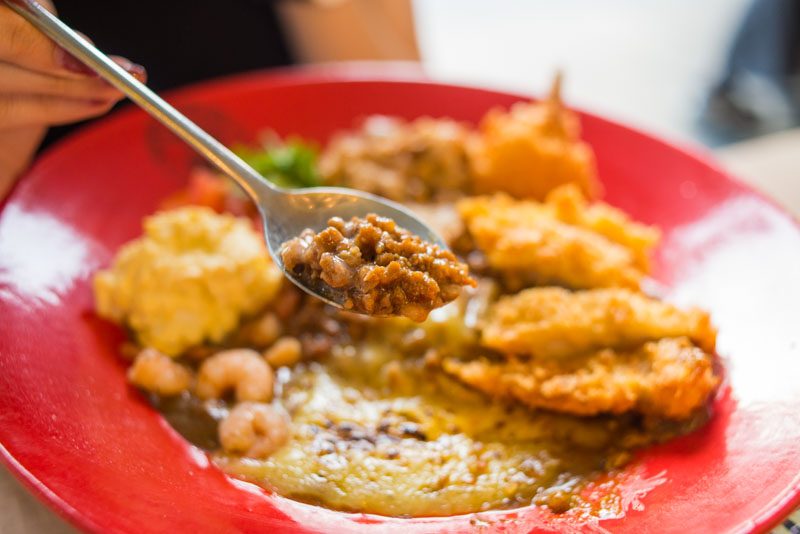 The minced meat was a close second. It was sweet and flavourful, and added a layer of texture to the rice that was certainly pleasing. 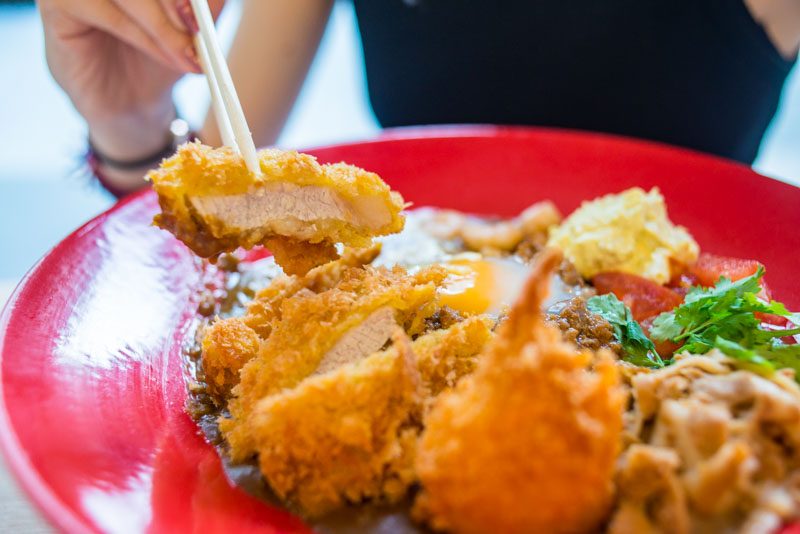 While not spectacular, I think the pork tonkatsu deserves an honourable mention. Fried to a perfect crisp with the meat still tender, this was highly addictive! 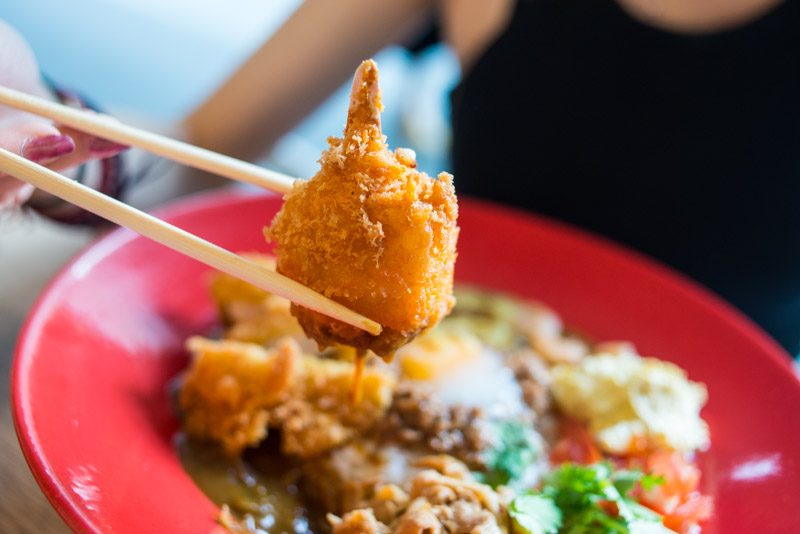 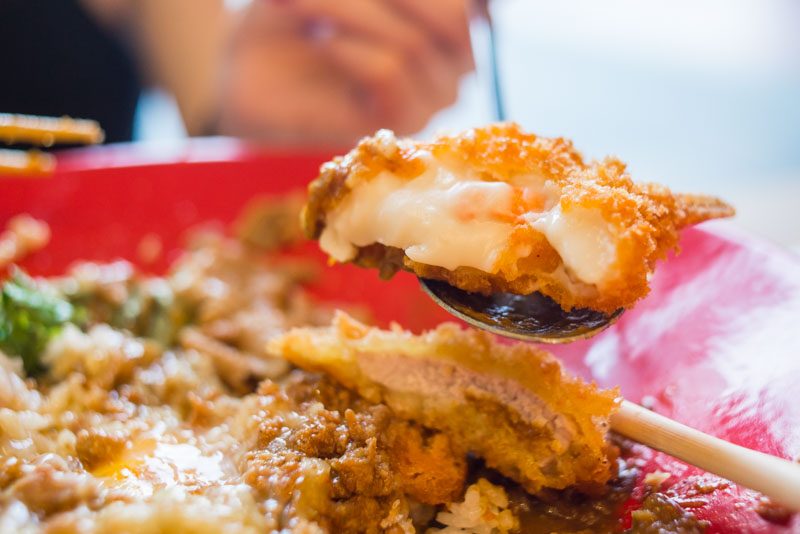 The most interesting topping award (though its taste is debatable) could perhaps go to the crab cream croquette. The best way to describe this would be a ball of deep-fried cream, with a small bit of crab.

The cream is sort of like a bechamel sauce, which to be frank, isn’t something I particularly like. However, I truly enjoyed the smooth and silky texture of the cream. 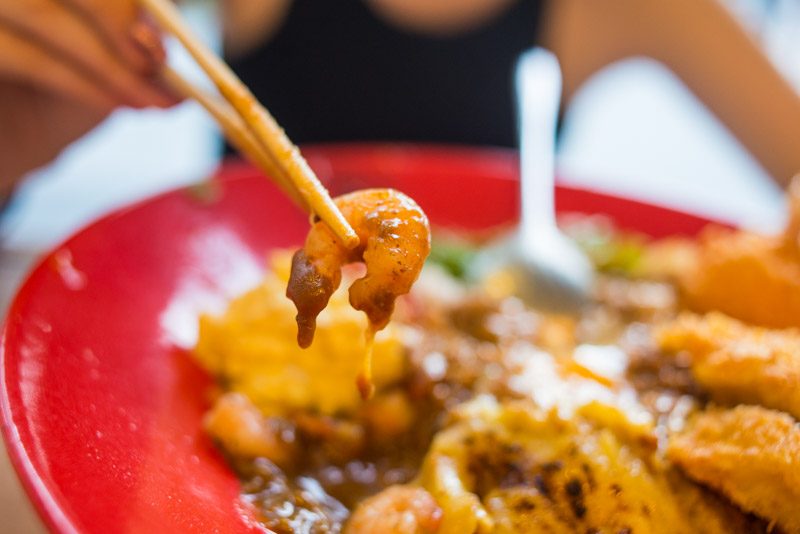 Sadly, the ebi was disappointingly small and a little underwhelming. Still, the dish was extremely worth its price, considering the almost ridiculous amount of toppings that was given.

While I’m not big on Japanese curry in general, I certainly enjoyed the food at Fujiyama Dragon Curry. Prices are reasonable, and portions are huge (and I’m a big eater), so it’s quite value-for-money. If you plan on heading down, be sure to bring a friend or two, or you’ll have a hard time finishing the food!

Previous articlePezzo’s Pink Teriyaki Salmon Pizza: Try This New Flavour But Only For The Unique Colour
Next articleKurotaki Chabann: Sip On Popular Bubble Tea From China That’s Finally Made It To Singapore