FYR Cycene Ond Drinc: Get Your Hands Dirty and Dine Like Cavemen 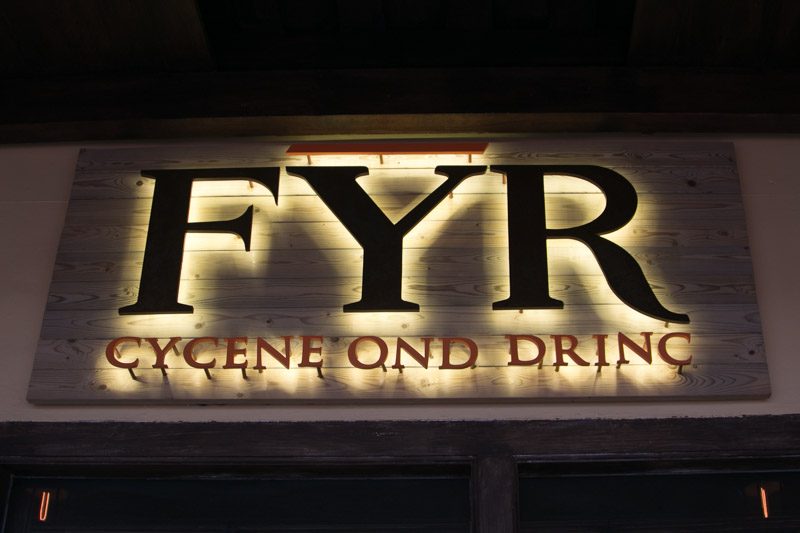 FYR: CYCENE OND DRINC, which means Fire: Kitchen And Drink in Gaelic, marks a significant milestone in April 2016 as it reaches its first anniversary. Definitely far from the likes of extravagant fine dining, FYR is a rustic and guileless “cavern” hidden amongst the Foodie enclave of Boon Tat Street. FYR transports us all the way back to the stone age, when us Homo Sapiens first discovered fire, wore garb made out of animal pelts, and ate basic meats and roots for sustenance. Following this theme, FYR has come up with a Caveman Supper Menu in celebration of their first birthday. This extra large delectable platter of chow is to be shared amongst four to five people. 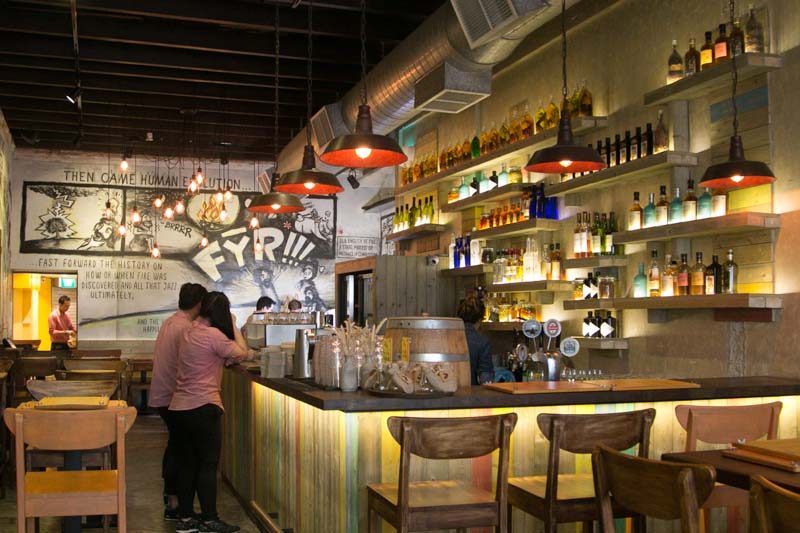 Before coming down to FYR, don’t bother going through the hassle of dressing up, because you’re welcome even if you come clad in a singlet and a pair of of your shortest shorts. Come here, kick your feet up and simply have a good time connecting with our raw primal past. 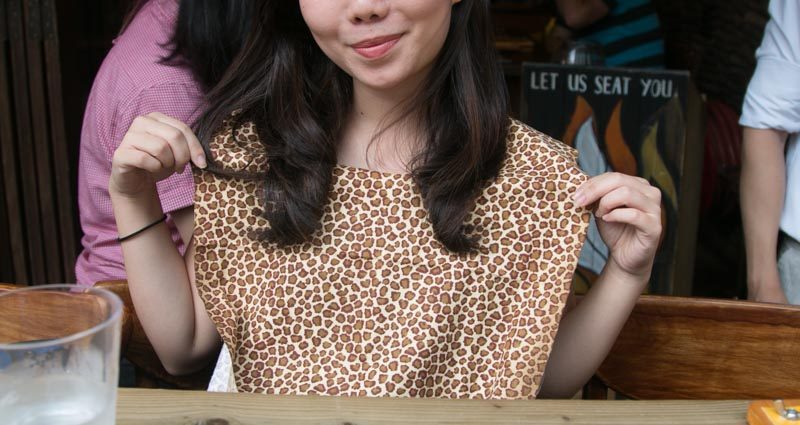 We were first welcomed to put on our bibs, and considering how they came in the pattern of leopard prints, I gladly obliged. Starting the night off a little wild already, I like. 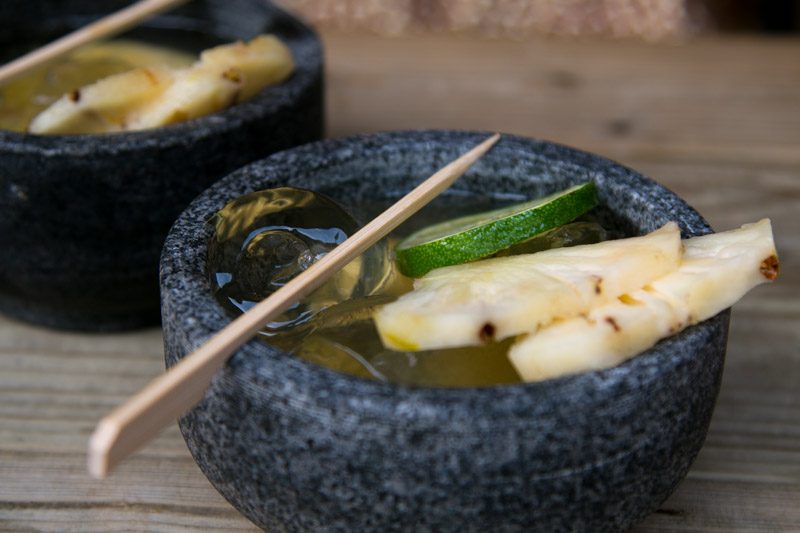 As part of the Caveman Supper Menu, we were offered Grog, an alcoholic drink that came in a stone mortar. I have to admit, drinking a beverage out of a bowl let me reach some level of liberation. Forget about social norms, I was slowly starting my transition into wild caveman mode.

The interesting part about the Grog was their grilled pineapples. They had permeating smokey flavours and were strongly infused with rum. Just eating them got me a little tipsy. The drink itself was more easy to down, probably due to the refreshing bursts of lemongrass and limes that complemented the Mount Gay Rum wonderfully. 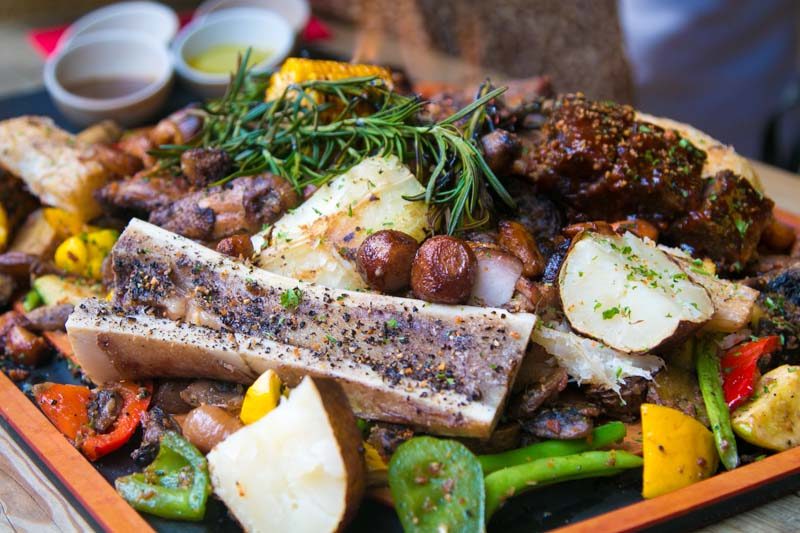 As one waits for the platter to arrive, one can’t help but to start chanting “food food food” in a very neanderthal-like voice in one’s head.

And when it finally arrived, and I was ready to dig in, they lit the entire platter on fire. The fire seemed almost invisible and the only other sign that the platter was even on fire was the rosemary smoking away. Don’t get me wrong, I love me the smell of fresh herbs burning away, but boy was I starving. 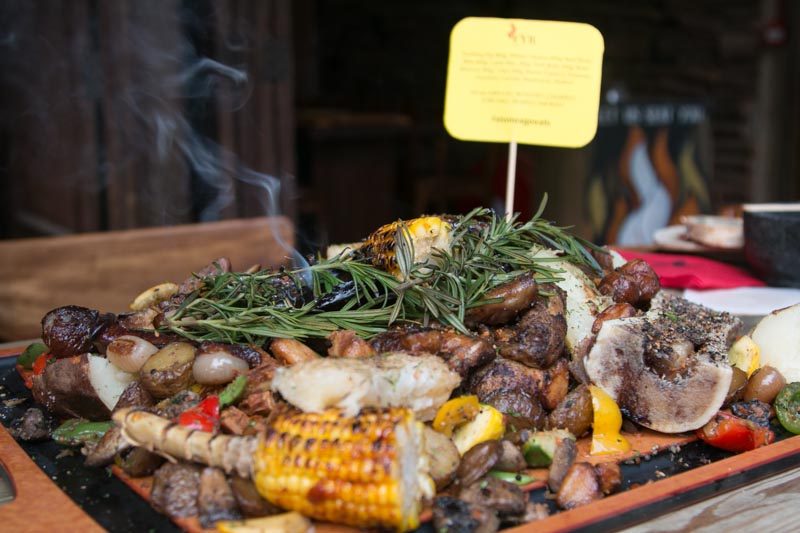 So when the dancing flames died down and the smoke finally dissipated, I was more than ready to dig into the grub.

Seeing as to how it was a “going back to basics” moment, despite some of my dinner companions requesting for forks and knives, I was adamant about my descent into wild man mode. So I dug in with my bare hands, with just my fingers and teeth as weapons of choice. 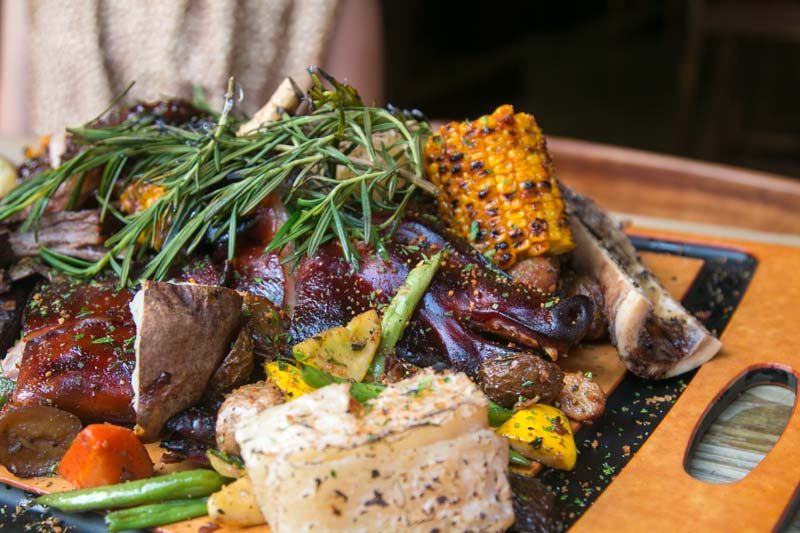 Yes, you’re not wrong, that IS a pig’s face. A yummy one at that. The skin wasn’t crispy like I had expected, but surprisingly soft and silky. Underneath that smooth skin was a thin layer of fat and succulent meat that basically fell apart by itself. All this was the result of birning the suckling pig in a blend of apple juice, herbs and spices for an entire night, then sous-vide twice for seven hours each. Deliciousness sure doesn’t come easy.

Maybe it was the primal instinct in me that got sparked earlier on, but looking at a dead pig’s face didn’t throw me off my game at all. I didn’t even hesitate about tearing into my meal. Some of the staples chucked into the platter are the basics like corn, russet potatoes, baby potatoes, and their less common cousin, the Cassava. I have to say, I’ve rarely ever come across a restaurant serving Cassava as a staple and I found it to be quite a refreshing experience on my palate.

Their baby potatoes were exploding with flavour after soaking in the juices from their house marinade. I managed to consume the majority of the potatoes on the platter, to the others’ demise. Guilty as charged. 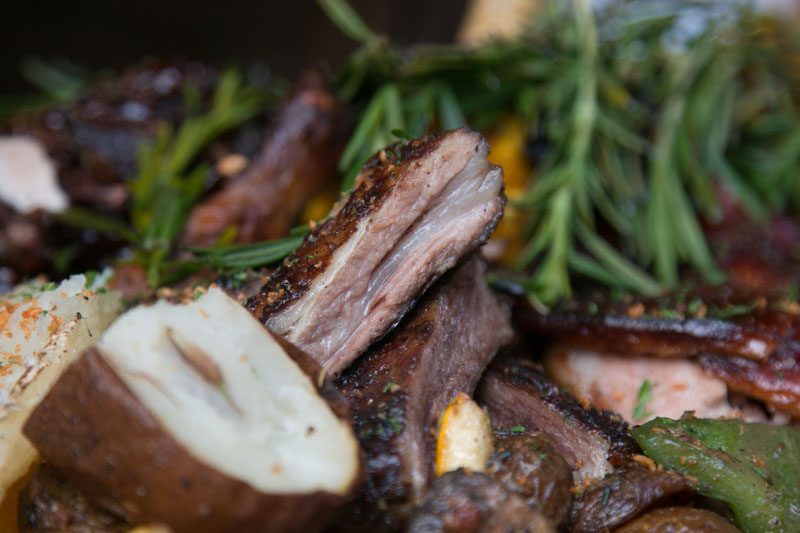 Some of us might not be fans of lamb or mutton due to their relatively pungent taste, but FYR’s lamb ribs were amazing. Their lamb ribs and beef short ribs were marinated with house marinades consisting of a great assortment of herbs, and were put through the long process of a 12-hour steam bake. The long hours were well worth it because the meats were tender, and the herby flavours came through so strongly, I couldn’t keep my hands off of them. Hidden beneath the smokey mountain of meats and starches, was a whole chicken waiting for us to unearth. It wasn’t as mindblowingly delicious as the rest of the meats, but hey, it’s still meat. GRILLED, too. Seasoned in a five-spice powder mix, it might not have been as flavourful as the rest, but was still very enjoyable.

Also, although I do mildly tolerate consuming animal innards, I never thought I would enjoy them, until I tried their Tripe. It was seasoned with Turmeric, giving the chewy Tripe a warm, peppery flavour 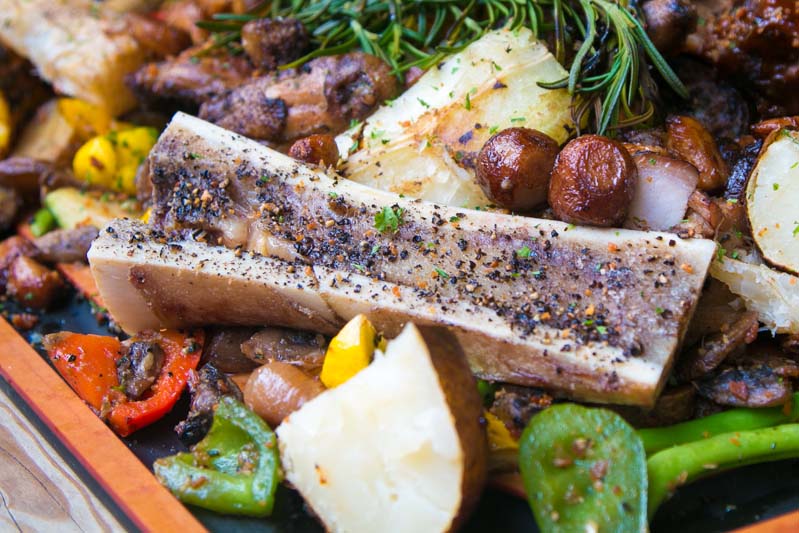 The Bone Marrow was the most simply seasoned and yet the most rich of all the elements on the Caveman Supper Platter. With just the sprinkling of salt and pepper, the beefy, buttery, fatty flavours really popped by itself. 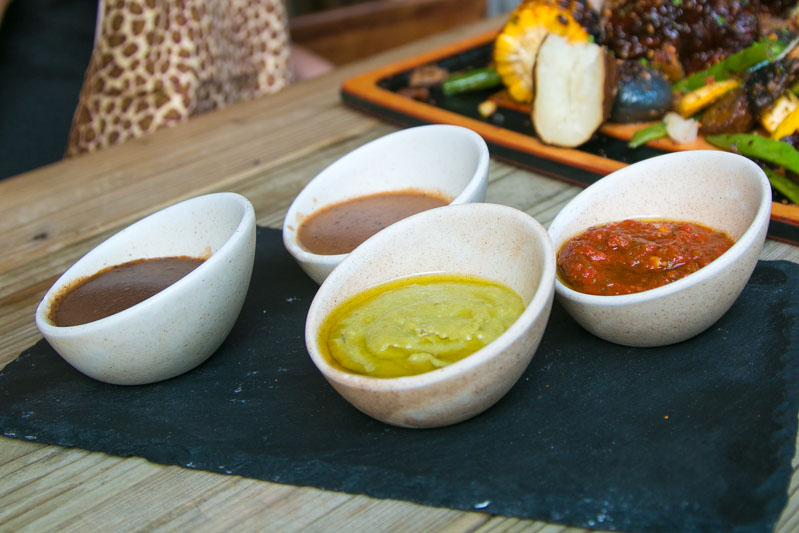 To complement their Caveman Supper, FYR even has a selection of home-made sauces to dip your meats into: Black Truffle, Green Chili Pesto, Belachan and Peppercorn. I’d recommend the Green Chili Pesto if you want to feel like you got kicked in the mouth. 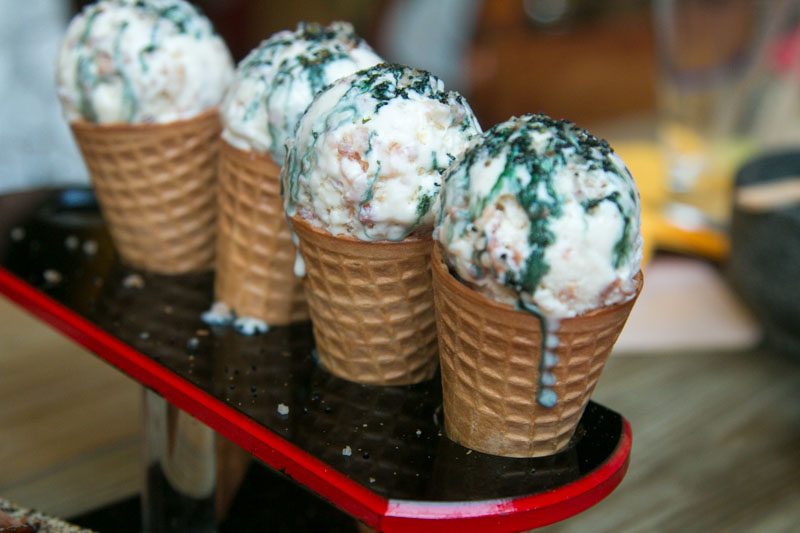 And to wrap up a wild night at FYR, was more meat. For dessert, they served us each a cone of Bacon Vanilla Ice Cream.

On the exterior is a drizzle of charcoal-coloured syrup and a generous dusting of sea salt (you might find the initial mix of flavours to be extremely jarring).

After you surpass the saltiness comes the light creaminess from the Ice Cream, which is soon after followed by a never-ending serving of bacon hidden in it.

It was an astonishing dessert, but an apt end to this Caveman Supper. 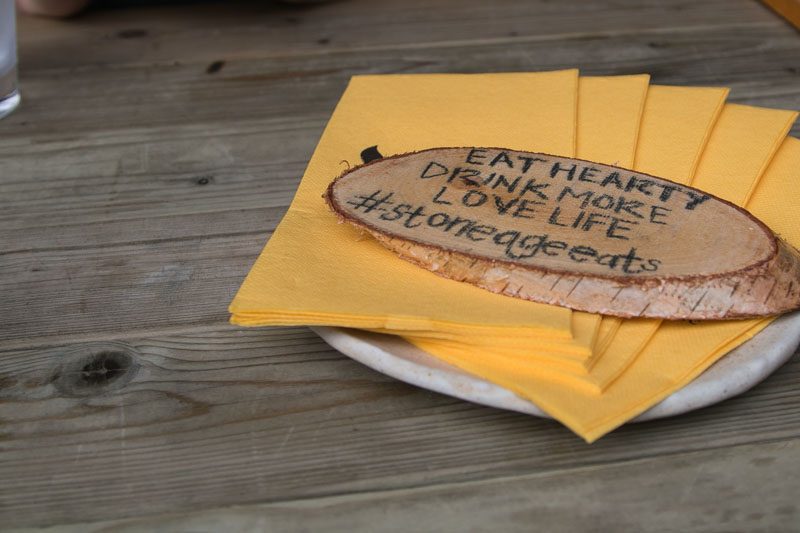 FYR’s caveman supper offers not only amazing food, but an eccentric dining experience too. The idea of eating with ones bare hands and being able to forget about norms or dining etiquette for just a smidgen of time is something I would recommend all to try.

One thing’s for sure: you’ll depart from FYR with very smokey-smelling hands and only one thought in mind, “Yabadabadoo!”