If you’re craving for a bowl of comforting donburi during lunchtime in the CBD but don’t want to burn a hole in your pocket, you’re in luck! Gyu Nami, started by 25-year-old owner, Daniel, and his partner, serves a pretty wicked rice bowl at Amoy Street Food Centre with only one item on the menu: Wagyu Roast Beef Donburi ($10). 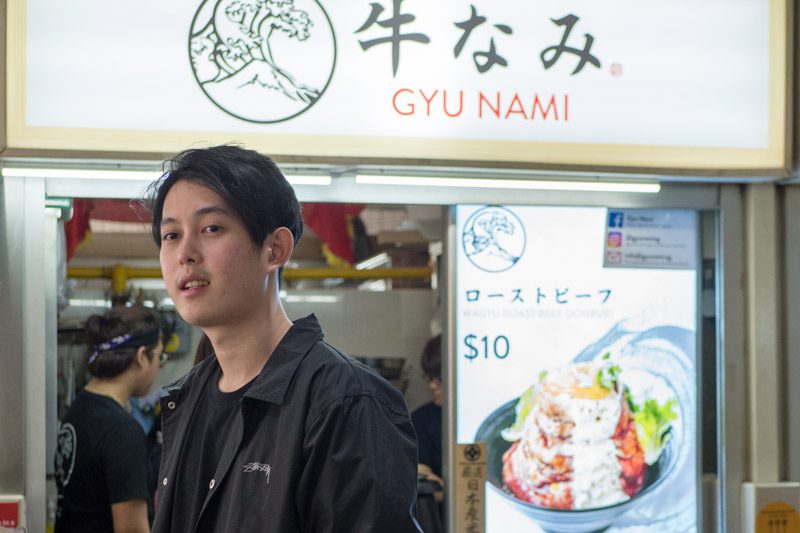 Having tried it once in Japan, and seeing it pop up in Taiwan and Hong Kong, Daniel felt a sense of urgency to bring it to the shores of Singapore; so that we too can be acquainted with the same mind-blowing experience he had during his trip.

We met Daniel to find out more about this one dish that has already garnered quite a traction since debuting in mid-August 2017.

Why feature only ONE item on the menu? 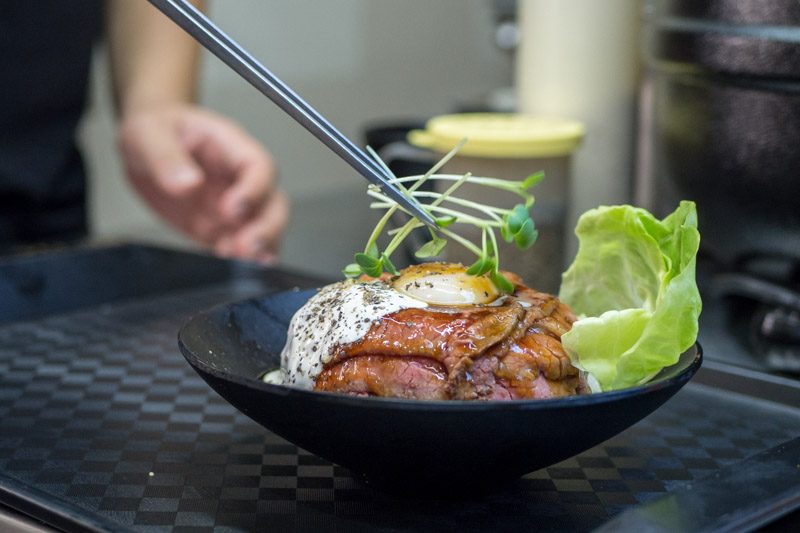 It is due to the [space] constraint we face when running a stall in a hawker centre, so instead of having many items on the menu, we wanted to focus on one item and serve our customers quality food — the rice is imported from Niigata Prefecture and we chose to use Australian wagyu beef from Jack’s Creek for its marbling.

What goes into making a bowl of Wagyu Roast Beef Donburi? The wagyu beef is roasted and thinly sliced. Instead of using raw egg like what I had in Japan, we sous-vide the eggs as not many in Singapore like their eggs raw.

Japanese food can be quite plain in taste, so we added more sauces, spice and increased the saltiness of the dish to cater to the taste of Singaporeans — onion sauce is used for the beef slices, a spicy Sriracha sauce mix for the rice, and yoghurt.

Why open your stall in a hawker centre instead of a restaurant? 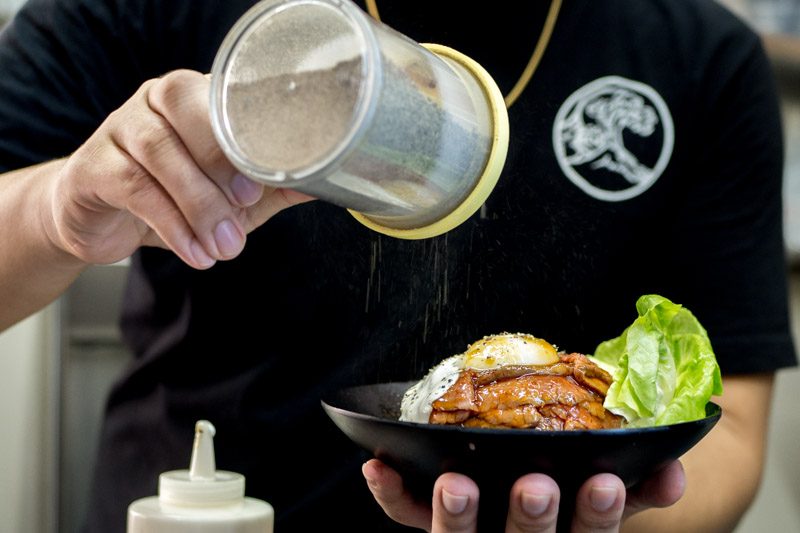 We started out wanting to open a storefront and already had investors who were willing to pump in a lot of money… but we didn’t want them to drive the direction of the food in another way. We want it how we think it will work. So instead of finding people to own part of your business, might as well do it small.

Opening a hawker stall, you can call it your own without having to listen to the opinions of investors. In a hawker setting, people will only judge you based on two things: good quality and pricing. Either they will love you or hate you for it. Because they only remember you through that particular dish. Whereas in a restaurant, you’ll have to pay attention to the ambience, food quality and other factors.

Our goal is to open more branches in Singapore, offer islandwide delivery and then expand to neighbouring countries. 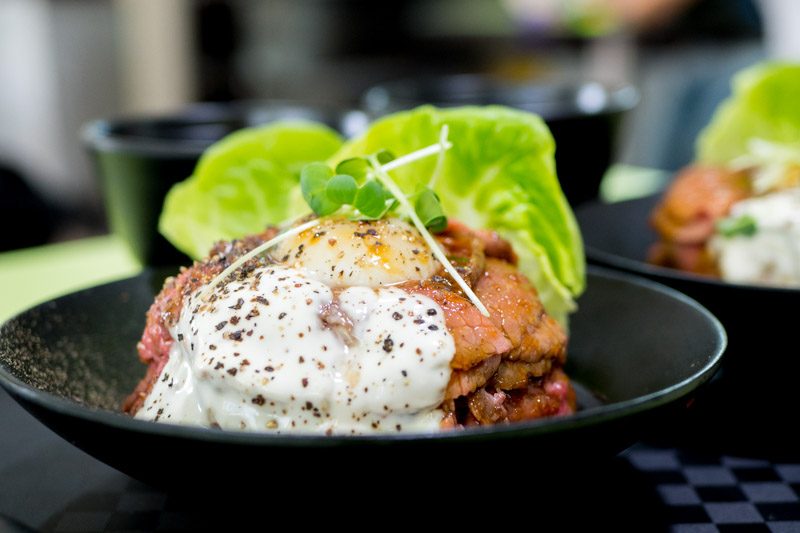 After listening to the story behind the business and Daniel’s drive in keeping his stall successful, we were all the more eager to dig in.

The presentation itself had worked up an appetite in us, with layers of thinly sliced beef (done in-house with a machine) encasing the rice, a wobbly sous-vide egg at the peak, and overflowing yoghurt running over the sides. A dash of pepper was sprinkled over the dish, giving a final touch to this masterpiece. The wagyu beef was perfectly roasted, boasting a rare, pinkish hue in the middle of each strip. It was firm yet didn’t require much jaw-work before the wagyu beef started melting in my mouth.

While some may think that $10 is a tad pricey for hawker food, what you’re getting is a bowl of premium ingredients and a generous portion of wagyu beef. 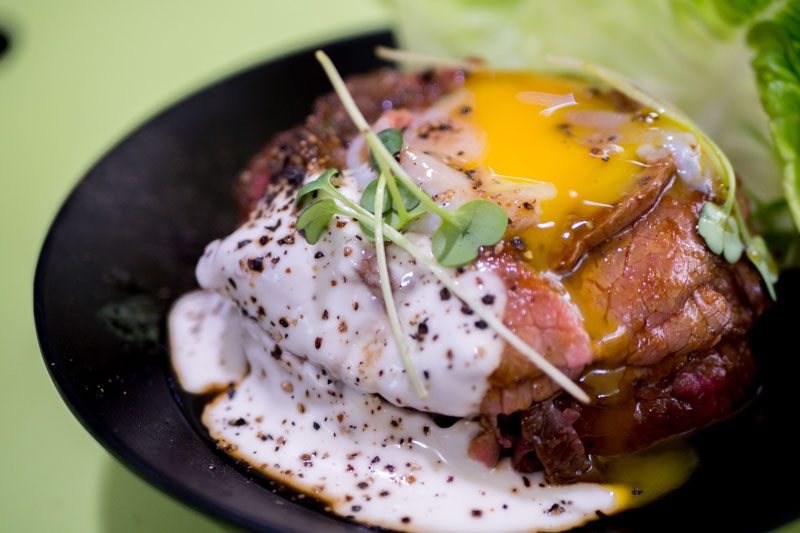 You would think that either of the three sauces would overpower the other, but everything worked well harmoniously — the onion sauce for the beef had undertones of lingering sweetness, while the spicy Sriracha mix for the rice gave a subtle kick at the end of each mouthful. I only started mixing the yoghurt in midway through to cut through the flavours with its tang.

The sous-vide egg was a great addition to tie together all the flavours, and kept each mouthful moist and creamy. 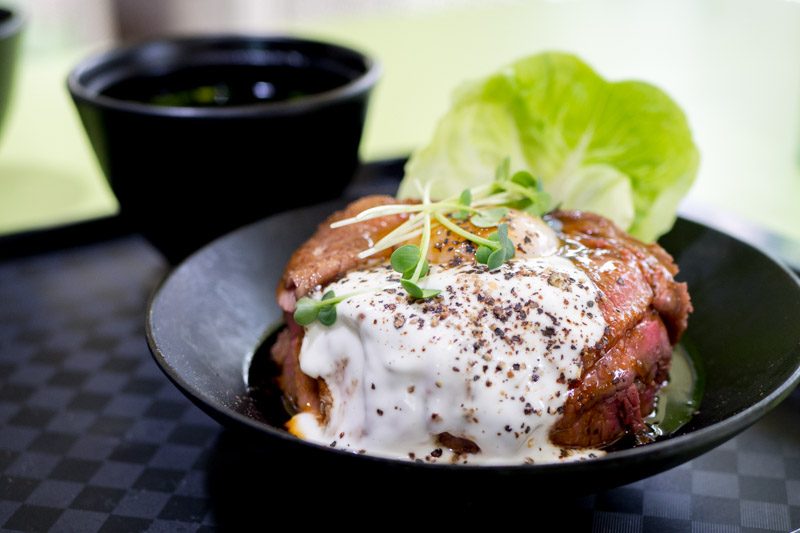 Selling just one item may seem simpler to deliver as compared to a typical hawker stall that has more than four items on its menu, but staying away from the conventional proved to be a stupendous decision for Daniel and his partner.

They were indeed able to focus on the quality of each bowl, and this provided a satisfying meal that wouldn’t look out of place in a proper restaurant. 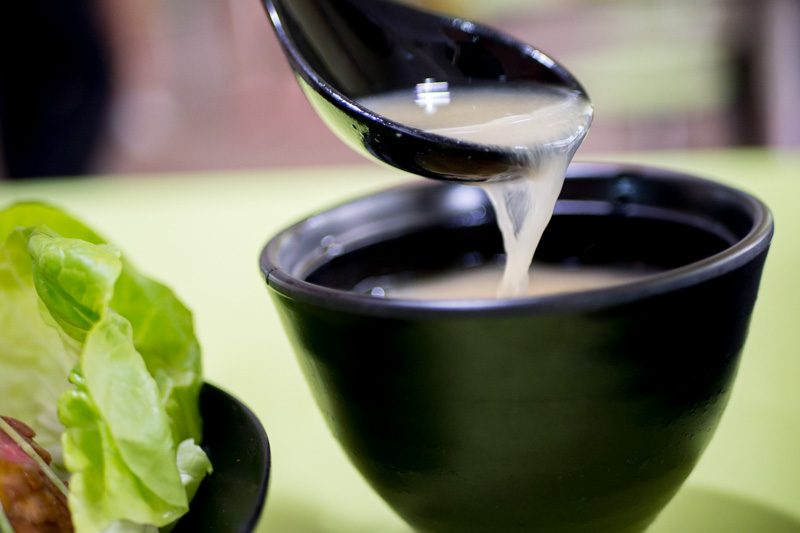 An accompanying bowl of miso soup was served, and though it was lighter and less salty than the ones I’ve had before, it helped to reset the palate in between bites.

Don’t be fooled by the portion of the bowl as it may look smaller than what’s seen on the signboard but it was really filling.

After two months of opening the stall himself, cooking, serving and washing the dishes after closing hours, Daniel now has a team of staff running the show for him as he looks into the operational aspects of the business. And while we look forward to the delivery service that’s in the pipeline, I’ll gladly return again for more servings.