Any donut-lover would have heard of Haritts, the famed Japanese-style donuts that are arguably the best in Tokyo. They are so popular in Tokyo and Taiwan that they tend to sell out by early afternoon!

So bless us, because this famous Tokyo donut cafe has recently set up shop in Singapore. 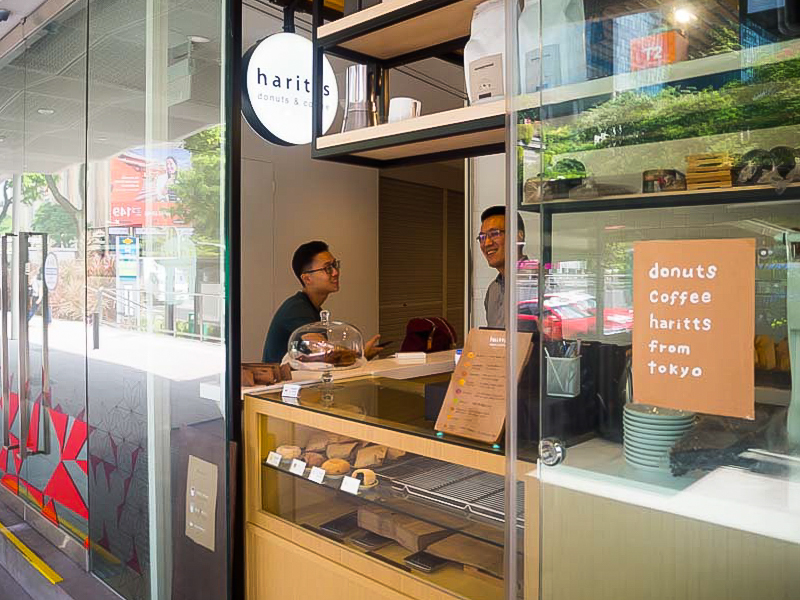 In typical Haritts fashion, the store opened end May 2018 along Havelock Road rather quietly; not that they need to toot their own horn though, because the superb donuts speak for themselves. Of course, we headed down to see what all the craze is about. Their secret — everything is made by hand! Haritt’s founders, the Sakai sisters, pride themselves on quality and insist on hand-making good donuts, even if they can only sell a few a day. The Singapore branch follows the same philosophy, and the team works tirelessly round the clock to make fresh batches. I suggest coming early, because each batch is snapped up a few minutes after they’re out! 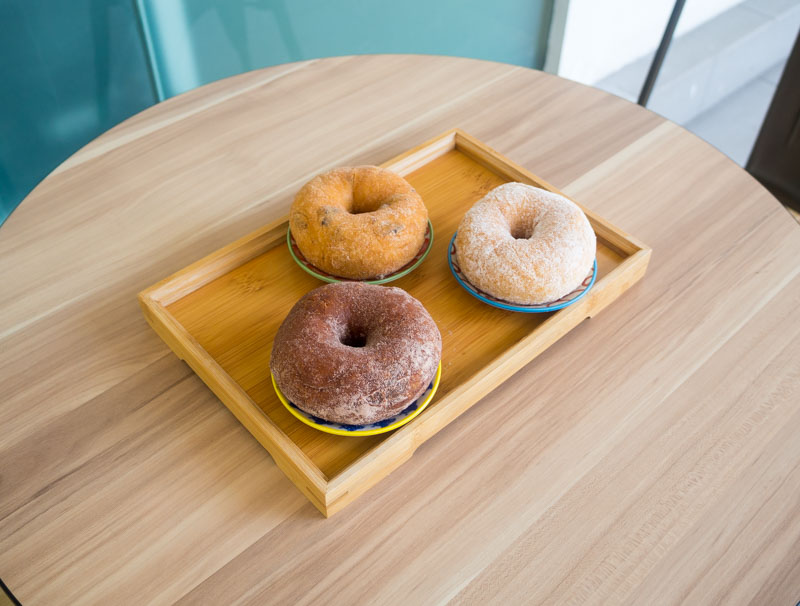 As with all franchises, I was nervous that the Singapore outlet wouldn’t be the same as the original one. But I was quickly reassured that almost all the ingredients used such as the flour are all imported from Japan, so the donuts taste the same. 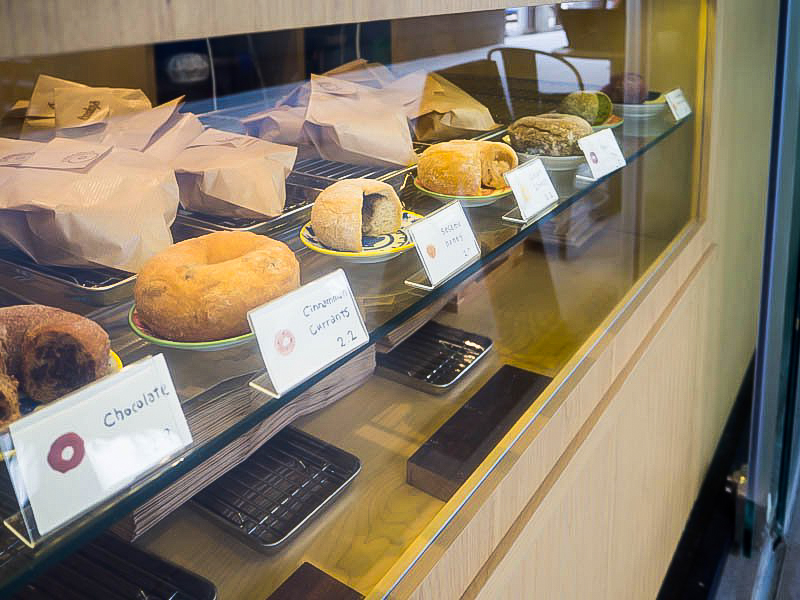 All the donuts here are priced really affordably, ranging from $1.90 – $3.20 a donut. They aren’t the whackiest that we’ve seen, but Haritts promises they’re crafting more exciting local-inspired flavours like Durian and Orh Nee! 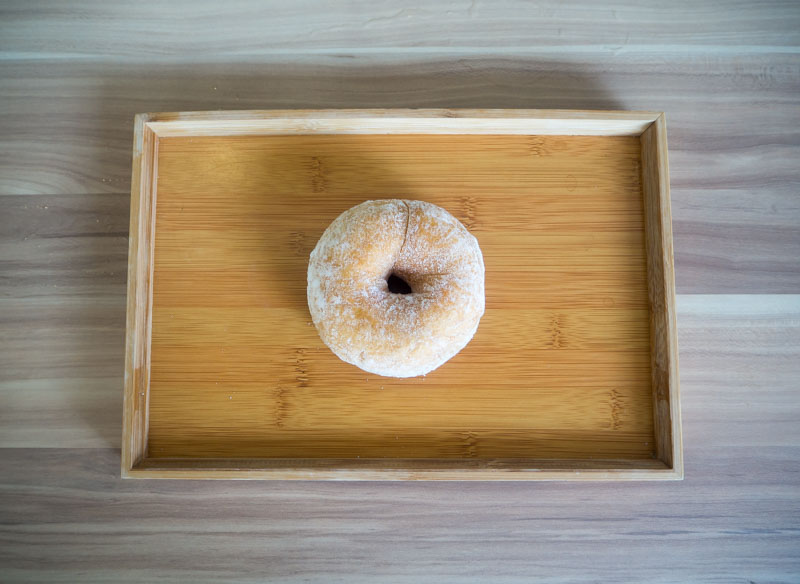 The main draw is still the quality, which their Original ($1.90) strongly attests to. The first thing I noticed was that the donut wasn’t the least bit oily, as is typical of many donuts I’ve come across. One bite in, and I was in love! Each donut was thick and pillowy, with plenty of air pockets that create its light, fluffy texture. What I really liked about the donut was the chewiness that gave enough bite, but not too much to mistake it for doughiness.

The Original isn’t glazed, but the light dusting of powdered sugar proved sweet enough. Even without any filling, the dough was moist throughout and very satisfying. 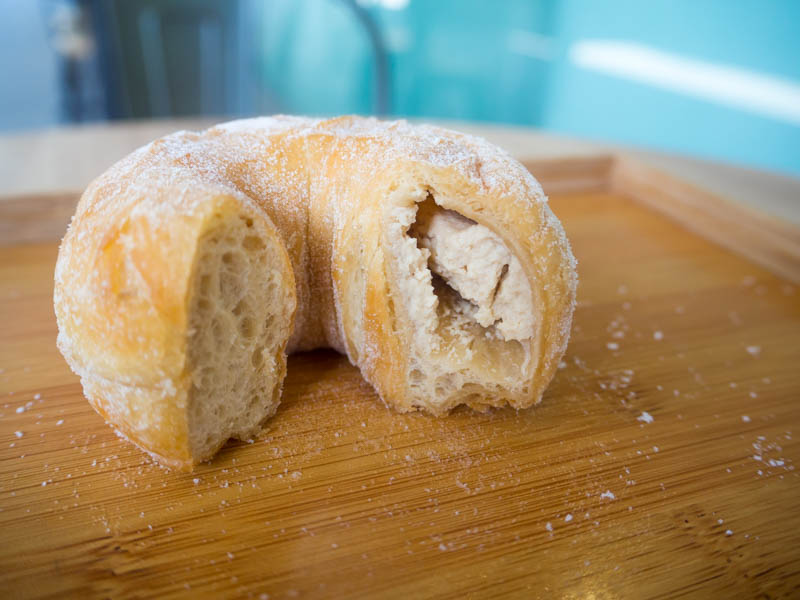 I was strongly recommended the Cream Cheese ($3.20) and it wasn’t hard to see why. The donut was packed with a thick cream cheese filling that lent a mellow tartness that blended with the sweetness of the donut.

Once I had this, there was no going back to the Original! My only gripe was that there could be more filling as some bites were lacking enough cream cheese. As a sucker for matcha, I simply couldn’t resist their Matcha ($2.70) donut, which uses a special brand of matcha flown in from Kobe. And let me just say, Haritts really knocked this one out of the park. 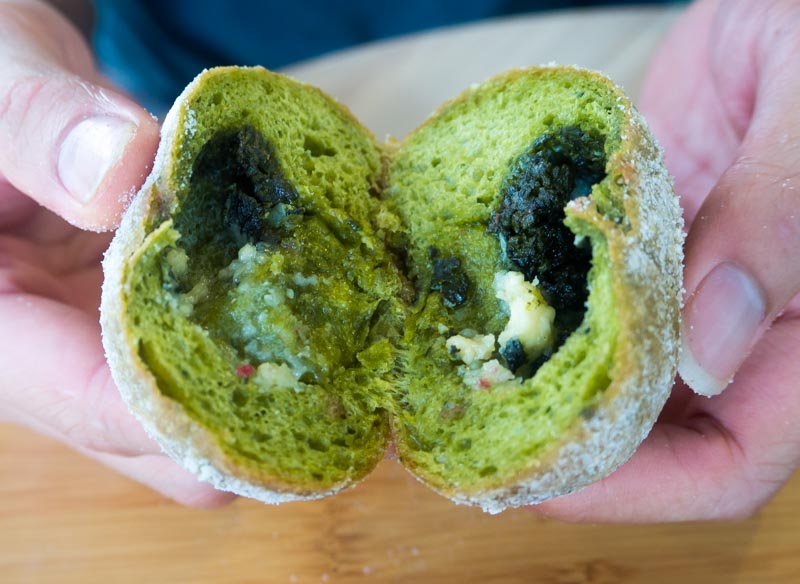 I like my matcha flavour strong, which was why I absolutely adored the matcha filling that still retained a slight bitterness. To balance it, there were bits of white chocolate for sweetness that were smooth and gave the filling a creamier texture.

This is one of the most popular flavours, and you might have to wait a while for it. 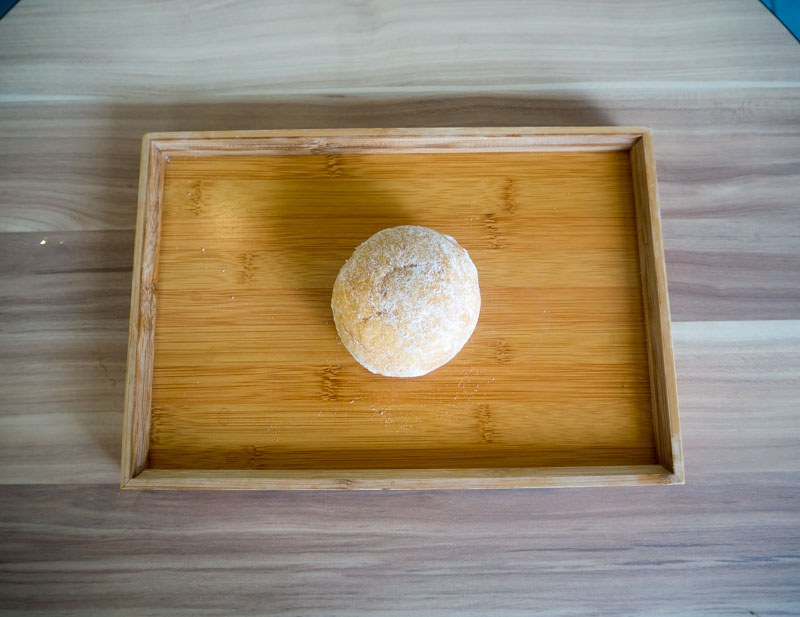 One of my favourites was the bun-shaped Sesame Honey ($2.70) that is so much more than its humble appearance. The centre split open to reveal an oozy sesame honey filling with actual sesame seeds that gave the donut texture. Each bite had a strong roasted flavour that was evened out with the mild sweetness of the honey.

This really was so addictive, and you’ll like it even if you aren’t a black sesame fan. 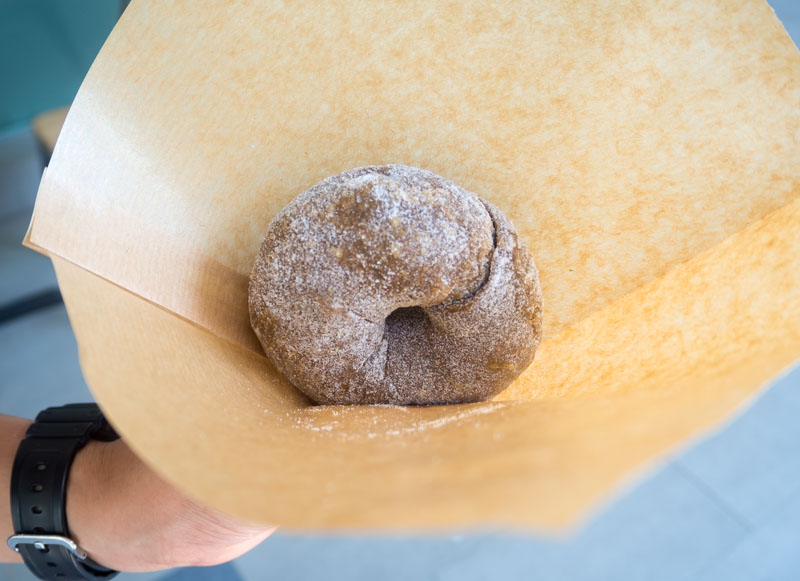 There were some lows as well though, one of which was the Houji Tea ($2.50) donut. 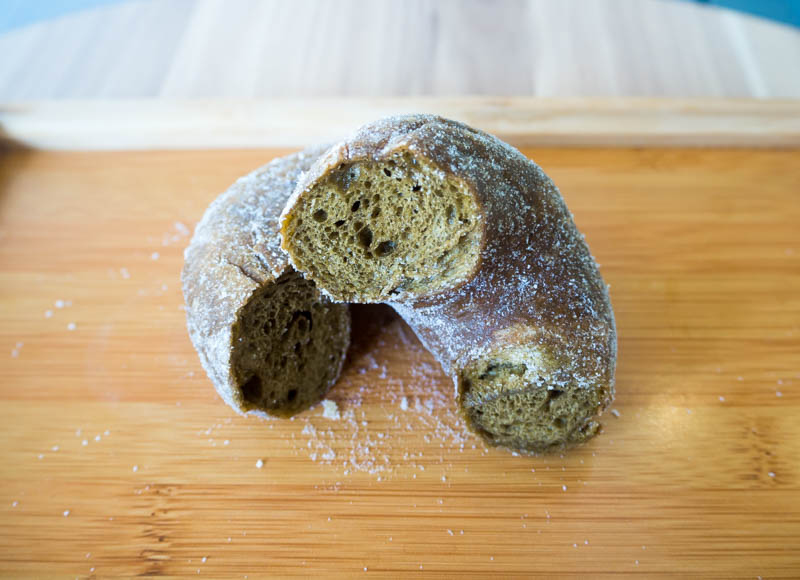 While the tea flavour was very fragrant and eased in nicely onto the palate, the dough just tasted a little dry in this one. Perhaps a filling or light glaze would have done the trick. 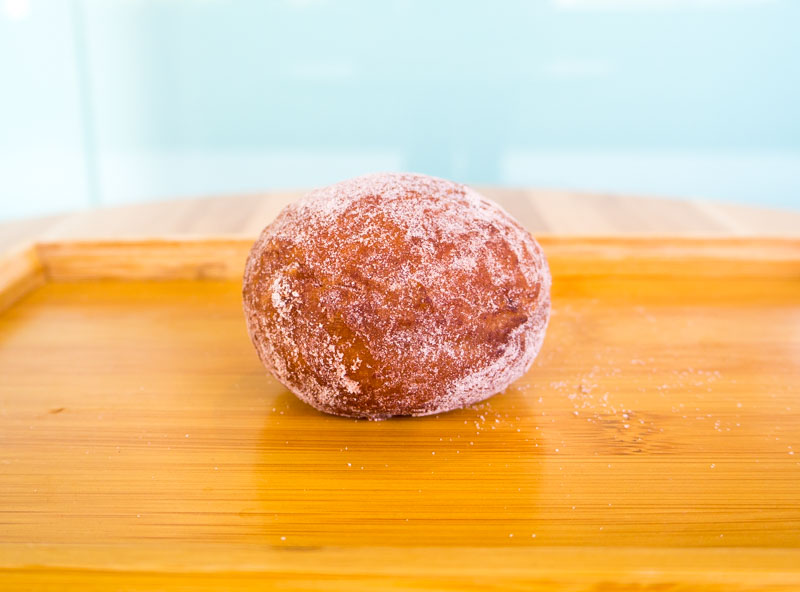 Haritts quickly redeemed themselves with the Raspberry White Choco ($2.70) that was coloured a luxurious red. The jam was deliciously tangy, and paired with smooth white chocolate for a milky sweetness. I did find that the filling could have been more evenly distributed, however, as I had one bite that was only jam. It was simply unbearably sour without the white chocolate. 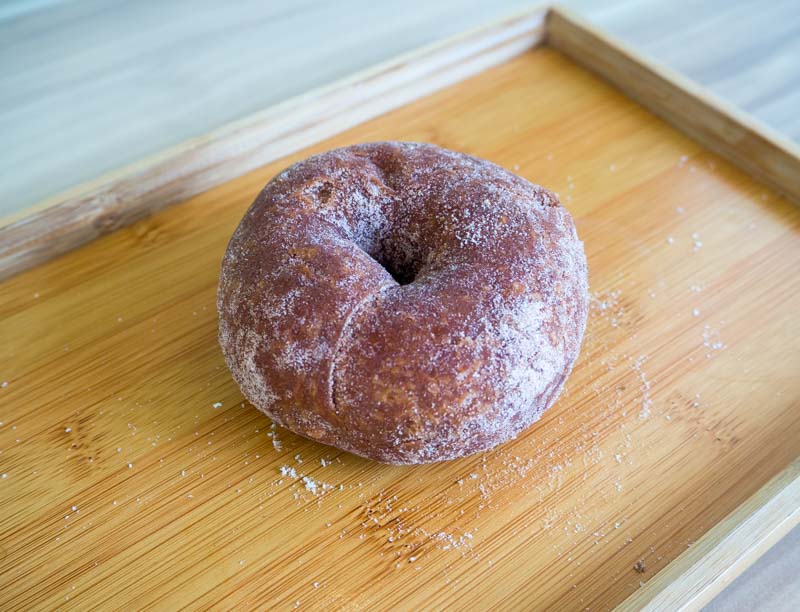 Chocolate donuts are a dime a dozen, but Haritt’s Chocolate ($2.90) deserves a mention. Mine had just the right ratio of chocolate filling, but the real standout was the intense, almost smoky quality of the dark chocolate. Do be warned that if you aren’t a dark chocolate lover, this one may not be for you. Of course, donuts are even better with a little caffeine kick. Pair your donuts with the Ice Coffee ($5.50) which was aromatic, owing to the quality coffee beans used from Homeground Coffee Roasters.

Top-notch donuts and a good cuppa? Now that’s a match made in heaven! The best part of the donuts, I must say, is the consistency. All the donuts that we tried were of equal fluffiness, which is hard to believe considering each one was made by hand. Haritts is still relatively hidden, so it’s mighty time you head down for a bite before the crowd picks up.

I was really impressed by the donuts here, and with more exciting flavours to come, it’s definitely gearing up to becoming my favourite donut stop.