Second-gen hawker, Joseph, has been running Hup Hup Mee Siam located at Circuit Road Market & Food Centre, for nine years. He has been running this stall all while raising his two daughters and waking up in the wee hours at 3.30am daily, just to prepare ingredients for the day’s sales.

Joseph has been enjoying these very dishes made his mom since he was young, and was eventually taught to him during his youth. 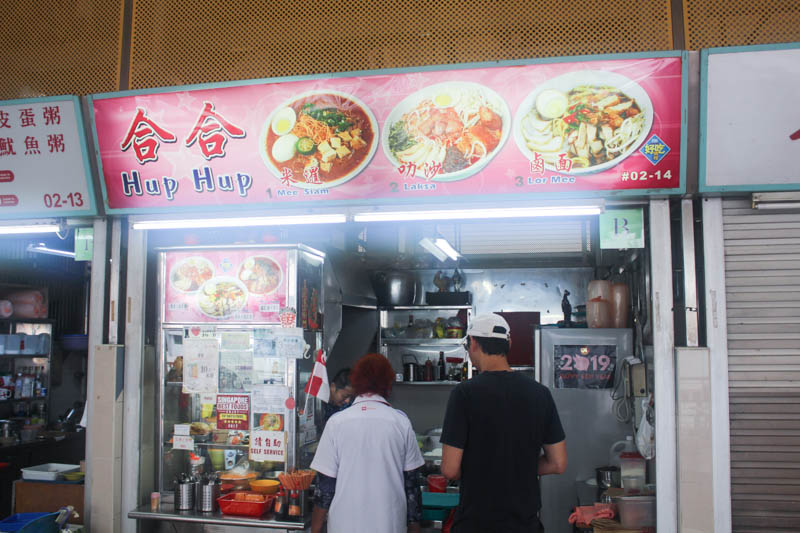 His stall is located on the second level of Circuit Road Market & Food Centre, and had a simple faded pink signage with hints of big stars at the storefront displaying the three dishes sold daily at Hup Hup Mee Siam.

I popped by his stall on a weekday afternoon, when most people are at work. To my surprise, there was a continuous flow of people going to his stall. There were about two to three people already queueing, which was commendable considering this was a quiet afternoon at a hawker centre in the heartlands. 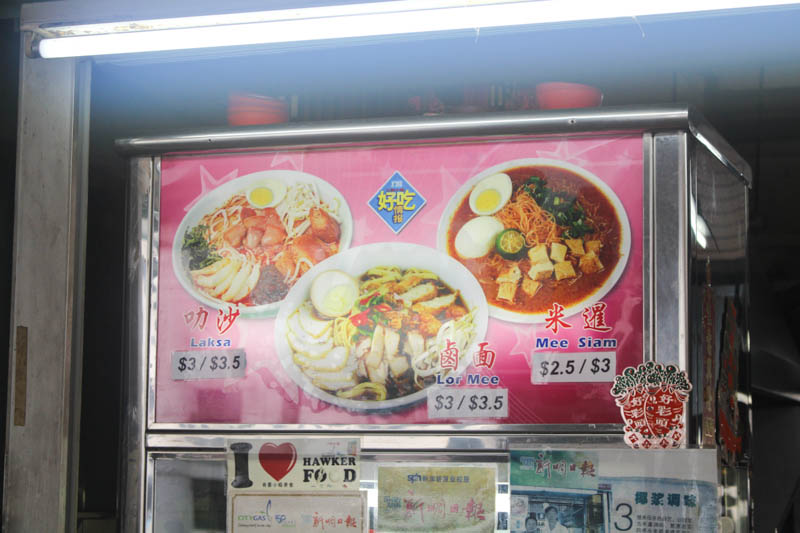 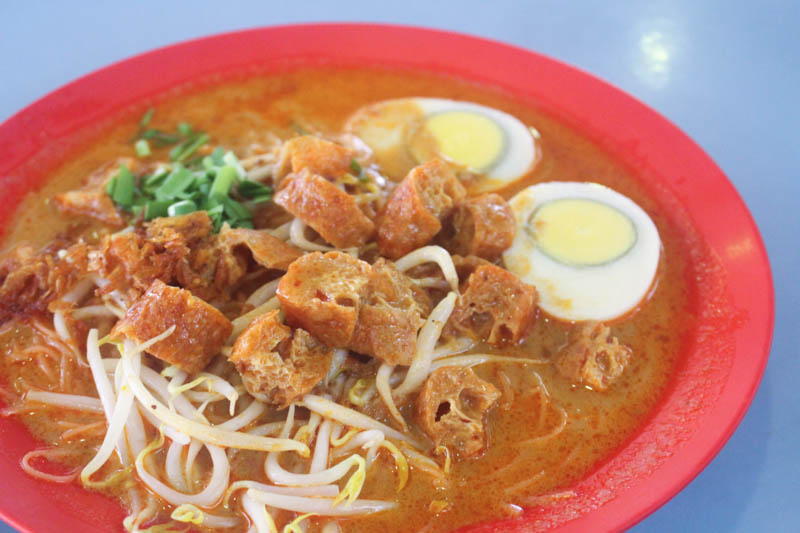 Starting off with their Mee Siam, it was generously served with a plate loaded with beansprouts, fried beancurd, as well as stir-fried rice vermicelli noodles with a split boiled egg at the side. 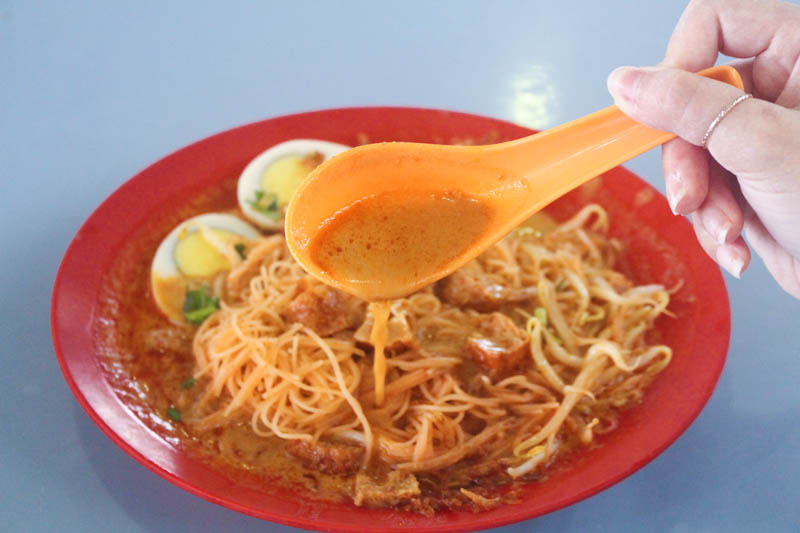 The amount of gravy that smothered the ingredients was not neglected, in fact, it filled the plate almost to its brim. Squeezing a lime into Mee Siam is a must-have, to give your mee siam a contrasting taste to the spice and saltiness.

Giving the gravy a try, I was surprised as it was not as strong as other mee siam‘s I’ve tried before in terms of its spiciness. To those who do not take spice well, I would definitely recommend this. To those who love your daily intake of spicy food, fret not, their chilli will definitely knock you out. 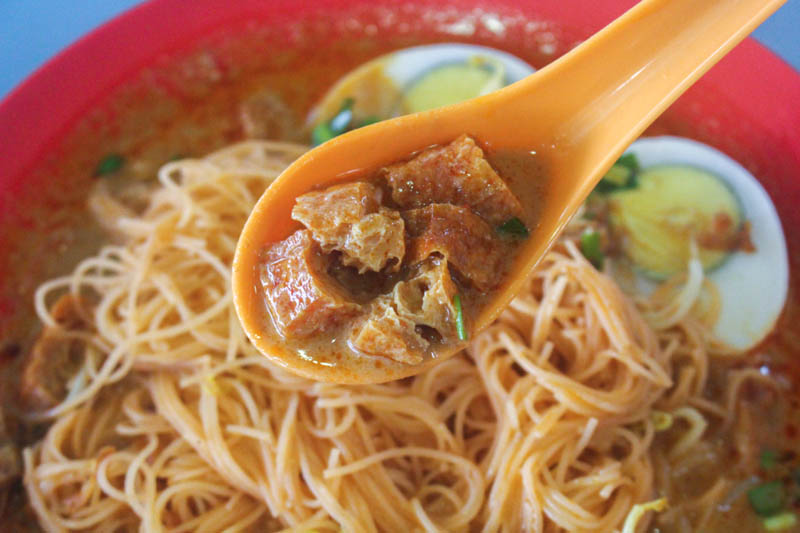 The fried beancurd came in small pieces, soaked the gravy well, and gave it a meaty texture. As a whole, it was comforting and reminded me of my grandmother’s mee siam; I would definitely have this on a rainy day. 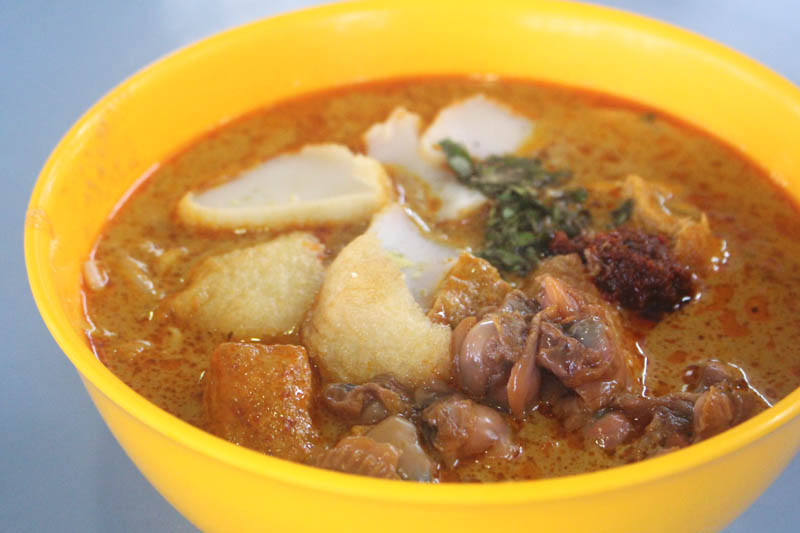 Moving onto their Laksa, I marvelled at the steaming bowl of ingredients, like hum (cockles) and fishcakes, as well as a sprinkle of laksa leaves, with a coconut curry broth that was fragrant. It was rich and had a briny punch. Sinking into the Laksa noodles, I was so glad that the thickness of the vermicelli was extremely satisfying and was al dente. The gravy, meanwhile, had a potent curry flavour, had a good thick consistency with a slightly charred taste, which reminded me of claypot dishes. 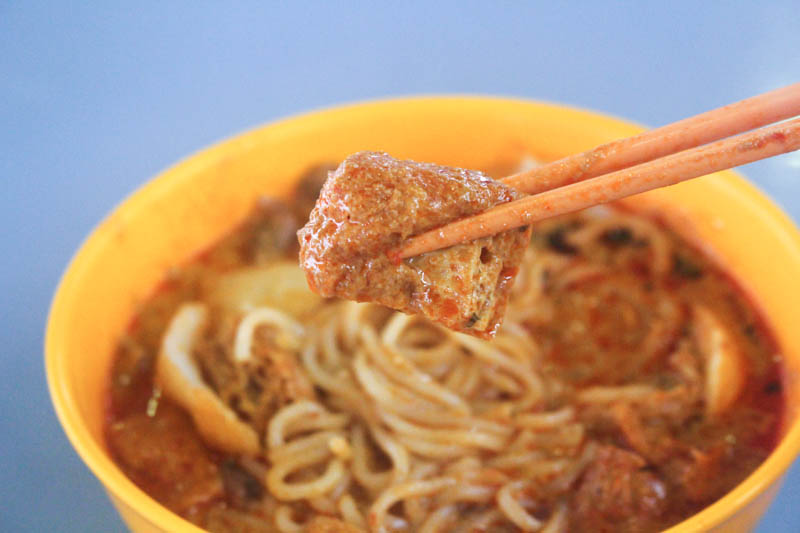 The fried beancurd soaked up plenty of the Laksa gravy because of its larger surface area, and with the springy fishcake and the saltiness of the cockles, it struck a balance in both taste and texture. It was such an adventure tasting these dishes, but sad to say this was the last dish I could indulge in—the Lor Mee. The bowl was covered with a heap of ingredients like slices of braised pork belly, fried fishcakes, and a whole piece of soy sauce hard-boiled egg.

It had tons of raw minced garlic, chilli padi and vinegar, of which you can add your preferred amount to your liking. To be honest, I’m not a huge fan of lor mee, but this dish took me by surprise. It was not as starchy and gloopy as other lor mee‘s out there, which I was extremely thankful for. The gravy’s consistency was thick, yet it went down smoothly without being too overwhelming. Taking a bite into the braised pork belly, it was satisfyingly succulent and juicy, with a substantial thickness to every slice I savoured. 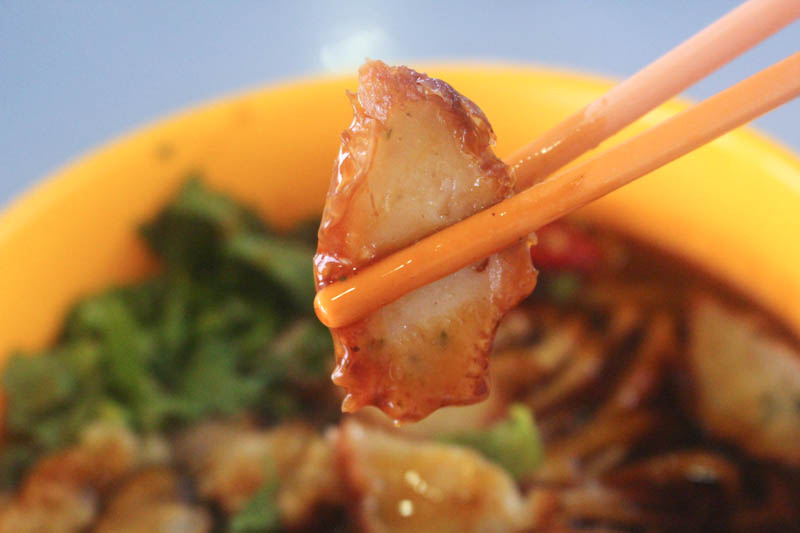 The fried fishcakes definitely did their part in making the entire bowl of Lor Mee a wholesome one, with its gritty edges giving the fishcake a hearty texture, and altogether making the Lor Mee dish an enjoyable one.

Hup Hup Mee Siam is definitely a place to get an affordable bowl of hawker goodness with great portions, where I’ll definitely come back to have their Laksa. Meanwhile, they might have converted me into a lor mee lover!