Hidden between rows of neighbourhood shophouses at West Coast, this nondescript cosy little cafe might easily go unnoticed. I’d tell you to never judge a book by its cover though, because Ice Cream Frenzy is a place full of surprises, just waiting to be discovered. Illuminated by dim yellow lights, this gelato cafe is furnished with mismatched sets of tables and chairs, with teddy bears and bright house plants taking up residence too. I was greeted by the jovial and welcoming smile of the 73-year-old shop owner, Uncle Tom, as I walked in.

When I asked Uncle Tom about how he decided on the store design, he simply explained that he wanted a snug, inviting environment for customers to feel like they’re at home while enjoying his home-made gelato.

Uncle Tom might be 73, but don’t let his age fool you! Having opened its doors to the public in 2009, this 11-year-old shop had been single-handedly managed by Uncle Tom since his retirement. Formerly a teacher, he uses chalkboards to display his wide menu, and little colour-coded post-it notes to differentiate the various gelato flavours and their respective prices—a rather whimsical touch if you ask me.

With 10 years of experience, creating new, innovative flavours and experimenting doesn’t come hard to Uncle Tom at all. Our first contender was the Unicorn Vanilla ($4), a favourite among children. One of the not-so-weird combinations, this scoop of gelato was brightly-coloured and vibrant. Digging into the Unicorn Vanilla, I noticed that it tasted notably different from commercial vanilla flavours that you can buy in stores. There was a hint of icing sugar in the taste, somewhat like cake frosting, but it was not overly sweet nor jelak.

I could see why this would be popular among the kids, because if I were still a kid, I’d eat this every day. Moving on to Uncle Tom’s latest creation, the Turkish Delight in Caramel ($4), I was excited to see how he had incorporated the sweet cubes of jelly into gelato.

It came sprinkled with sliced almonds, but the cubes of Turkish Delight were nowhere to be seen. From just a single bite, I could tell that pieces of Turkish Delight were generously incorporated within the scoop. The almonds gave the overall dessert a crunchy texture, which mixed well with the chewiness of the gelatin.

The nuttiness blended extremely well with the caramel, and I found myself digging around the single scoop to find more chunks of Turkish Delight just to savour its sweetness. If you’re a fan of durian, you will definitely enjoy the D24 Durian ($6). Even before Uncle Tom served up the bowl, I could already smell the strong, intense fragrance of durian wafting through the air. It came in a very bright yellow hue, with visible durian fibres. This was one of the best durian gelato I have ever tasted in my life. It was very fresh and the flavours were intense and delicious.

I learnt from Uncle Tom that he does not use artificial flavouring in any of his gelato, and that includes the D24 Durian. I was surprised that I even got to taste generous chunks of durian flesh in just a single scoop! This was extremely authentic and I wolfed it down in a matter of seconds. The Salted Egg Fish Skin with Caramel ($5) was the flavour I was the most nervous to try. I expected the salted egg fish skin to be incorporated into the gelato itself, but the skin would lose its crispiness if it were mixed in.

When the ice cream finally came, I was impressed. Topped with crispy fish skin and fragrant curry leaves, this dessert was served as a single scoop of caramel. 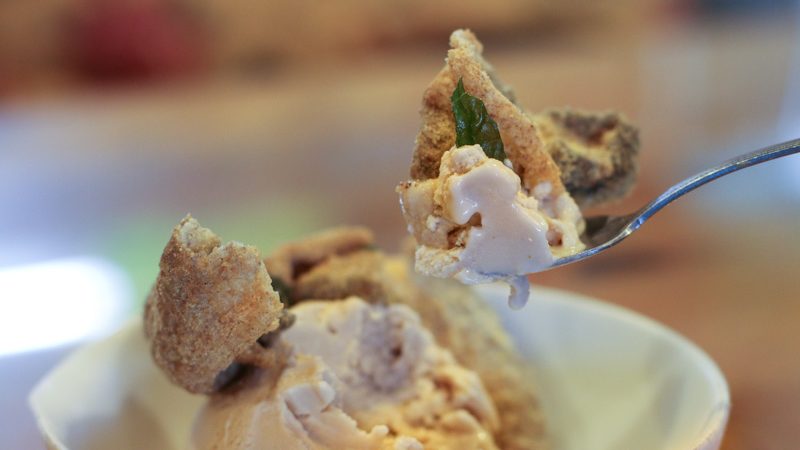 At first bite, I fell completely in love with the salty and sweet combination from Ice Cream Frenzy. The crunch of the fish skin made this one of my best gelato experiences. Slightly spicy, the entire dish was a perfect blend of sweet and savoury. What I liked most about the caramel was that the flavour was light and it wasn’t too overpowering. The Wasabi Chocolate ($4) was made with dark chocolate that’s 100% pure cocoa. I was excited to see how wasabi could be incorporated into something as rich as chocolate.

The wasabi hit my senses almost immediately once it entered my mouth, but it was mild. When I held it in my mouth, I could taste the clean, smooth “spiciness” of the wasabi, mixed into the richness of the dark chocolate. Adding on to the “crunch” were the mini chocolate chips, which I highly appreciated. My dining partner is typically someone who cannot take spice, so she found the chocolate aftertaste comforting. Before I left Ice Cream Frenzy, I had the Teriyaki Caramel with Nori ($4). Sprinkled with nori seaweed, it was the same scoop of caramel as before, but this time with teriyaki blended into it. This was the very first time I tried savoury gelato, and I was pleasantly surprised. The taste of teriyaki was subtle, but it was definitely there. I love the touch of seaweed—it brought out a briny taste. Overall, I was very impressed with how the savoury gelato could still retain a little bit of sweetness.

Uncle Tom made some pretty good points when we were talking about how most Singaporeans aren’t adventurous when it comes to experimenting with things outside the norm. Gelato doesn’t always have to be just sweet or sour, and sometimes you have to keep an open mind when you’re trying out new things to discover something you didn’t think you’d love.

For those with adventurous palates, I dare you to try Uncle Tom’s creations at Ice Cream Frenzy at West Coast.

Some new flavours that are in the works are Hojicha and Red Miso, so keep your eyes peeled for them at Ice Cream Frenzy. Surprising as the flavours seem, I bet you’ll fall in love.