Let’s talk about jjajangmyeon, the quintessential takeout staple that makes an appearance in almost every Korean drama.

Here’s a fun fact: jjajangmyeon is eaten on Black Day, an unofficial Korean holiday “celebrated” by singles who did not receive presents on both Valentines’ Day and White Day. They dress in black and eat black-coloured food—sounds like my kind of fun.

I would’ve loved to hit up every Korean restaurant serving jjajangmyeon, including the likes of Hong Jjajang and Hwang Sil, but my findings were narrowed down to these three spots. 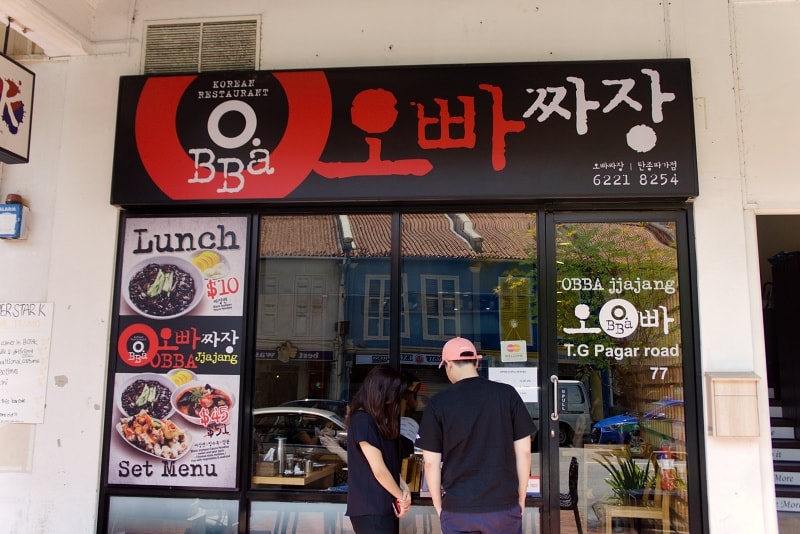 Seriously, ask any noodle-loving local where the best jjajangmyeon is, and they’ll probably say “O.BBa”. 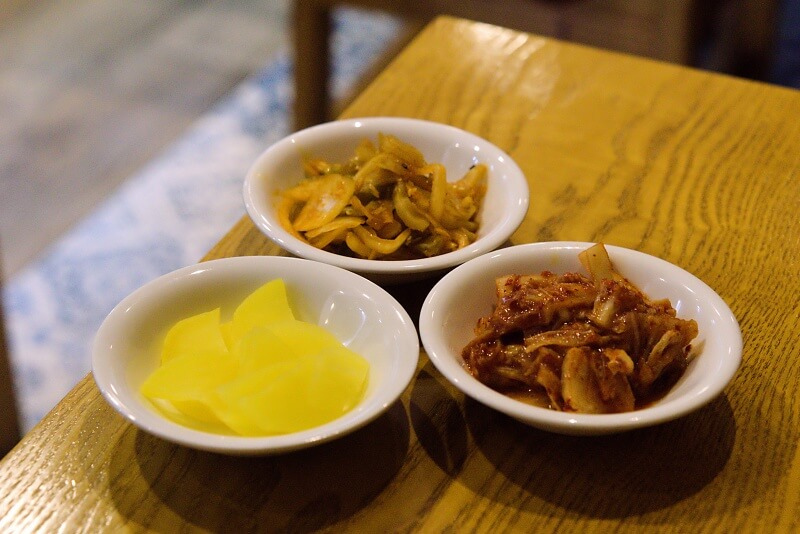 My dining partner and I came down during off-peak hours on a Saturday and queued for over 20 minutes.

We were presented with banchan of assorted kimchi and crunchy danmuji (yellow pickled daikon), the latter of which is typically served alongside jjajangmyeon. Mixing up jjajangmyeon can be a laborious process, but the even distribution of sauce and noodle is important. 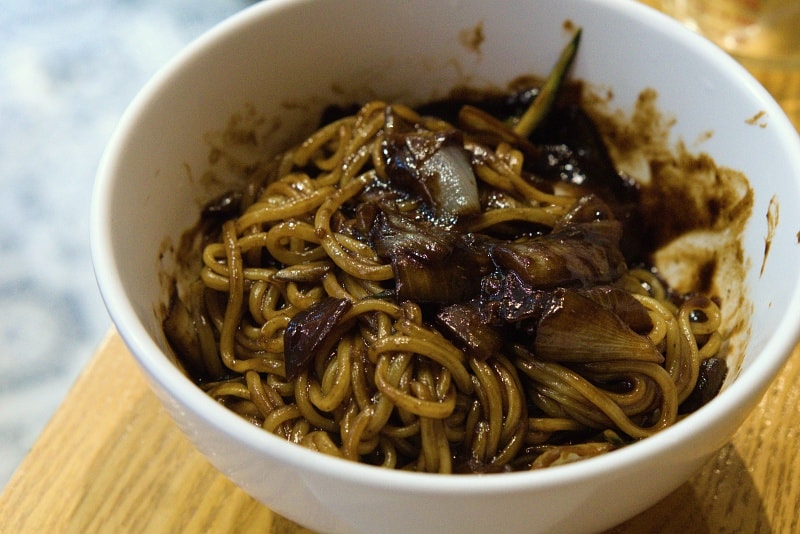 Despite being smothered in that thick, savoury, and slightly salty sauce, the noodles remained well-balanced throughout. 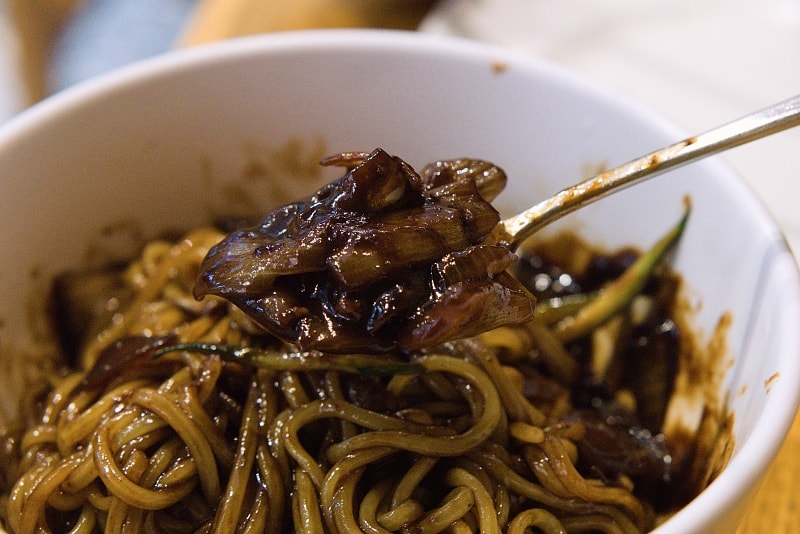 Onions featured heavily in this rendition, imparting a delicate natural sweetness to this already flavourful dish. My only gripe is that I would’ve preferred a better onion-to-pork ratio.

Even as I polished the noodles off to the last few mouthfuls, I didn’t find myself in a sodium-induced state of stupor.

It’s easy to see why their jjajangmyeon is such an effortless crowd-pleaser. There’s nothing much to critique. 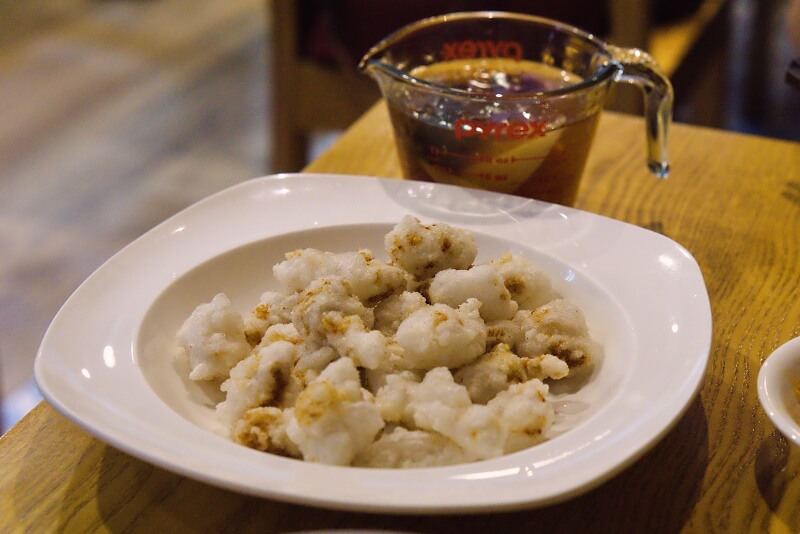 Nothing beats zi char-style gu lou yok (sweet & sour pork) in my eyes, but tangsuyuk is definitely a lot lighter on the palate. 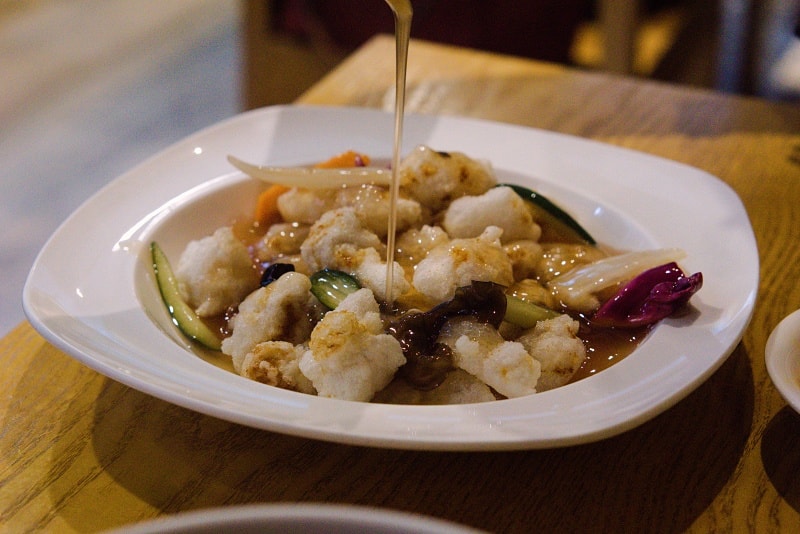 Serving the starch-based sauce on the side is a smart move. You don’t want the pork to get soggy within seconds. 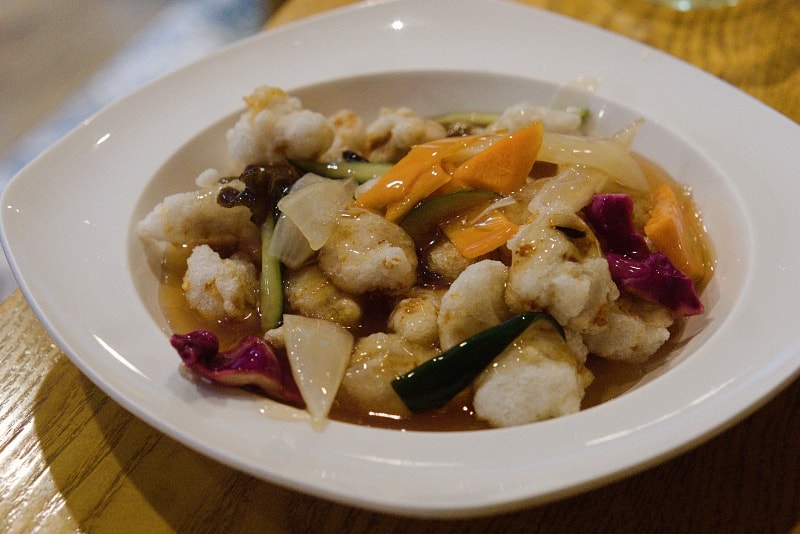 We didn’t want to fully coat each crispy piece of pork in the tangy, syrupy sauce. As I mentioned, the airy batter’s “efficient” sauce absorption rate has proven to be a disadvantage.

Some pieces had more batter than meat—one reason why tangsuyuk isn’t really my cup of tea. The meaty pork was easily offset by the array of vegetables—carrot, cucumber, onion, wood ear mushroom, and cabbage—best enjoyed in between mouthfuls of rich saucy jjajangmyeon.

All in all, O.BBa Jjajang is a well-loved classic. It will continue to draw in the crowds; let’s hope the quality of their jjajangmyeon never deteriorates. 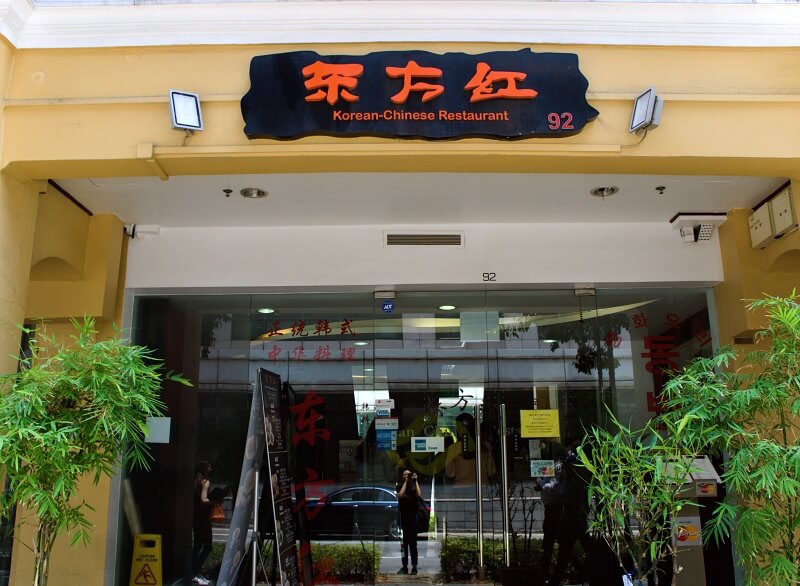 This CBD establishment is popular with Koreans and their version of the dish is widely touted as Singapore’s most authentic jjajangmyeon. 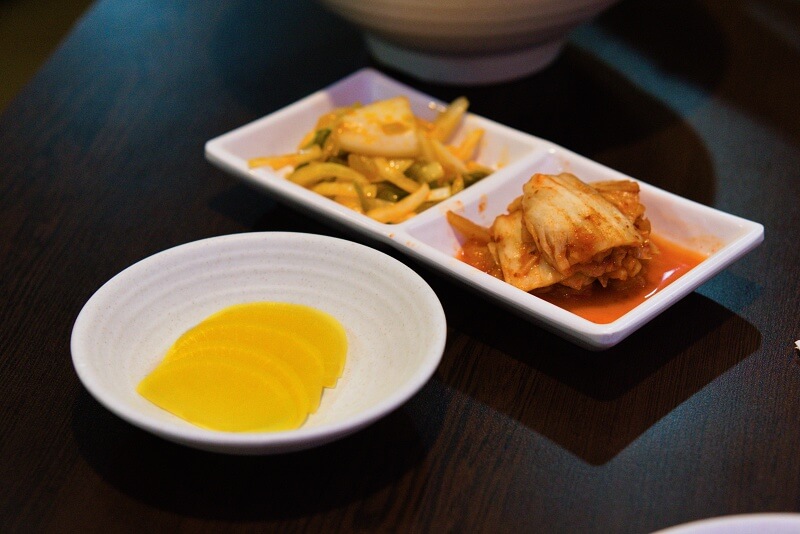 I visited them at 11.45am on a weekday, in an effort to snag a seat before the lunch crowd started trickling in.

An almost-identical banchan of danmuji and kimchi was served. 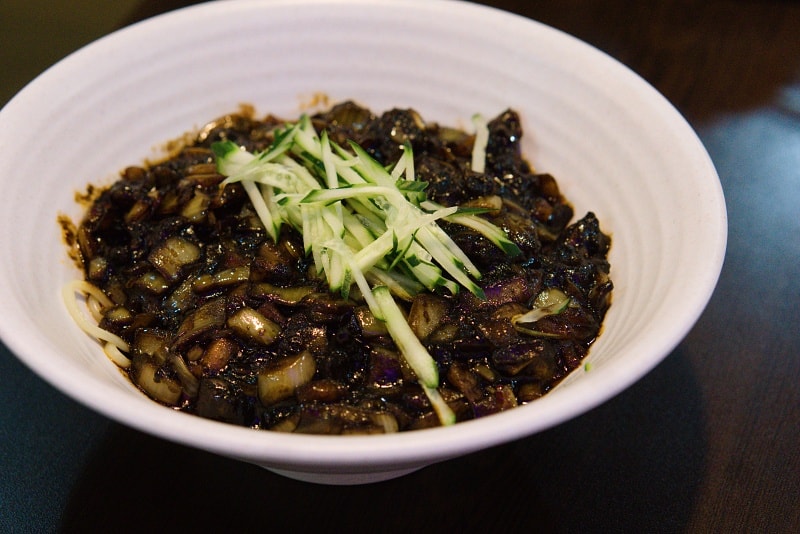 Being unable to choose between the Bai Nian Jajang (S$15) and Dong Fang Hong Jajang (S$12), our server recommended the former.

The difference? Seafood instead of pork. 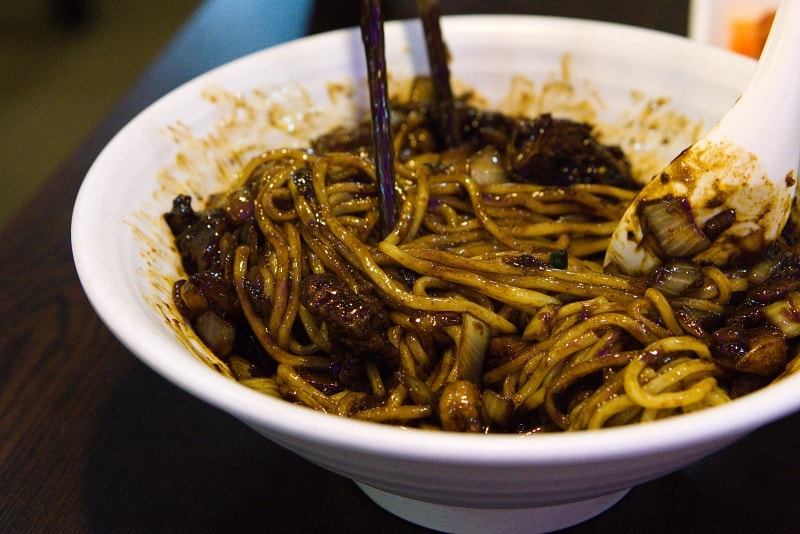 Now, this jjajang sauce was packed with ingredients, and had a thicker and less goopy consistency.

I noticed how springy the noodles were, and it didn’t take long for every strand to be evenly coated. Once again, the caramelised onions came through, rounding off each mouthful with a subtle sweetness. Honestly, the ingredients in this bowl were particularly outstanding, being rich but not cloying.

I couldn’t stop eating spoonful after spoonful of the seafood—tender fish, prawns, and squid — the flavour profile was just different, in a good way.

Though the sauce was a little oilier than expected, this entire bowl was definitely lighter, in comparison to other jjajangmyeon I’ve tried. 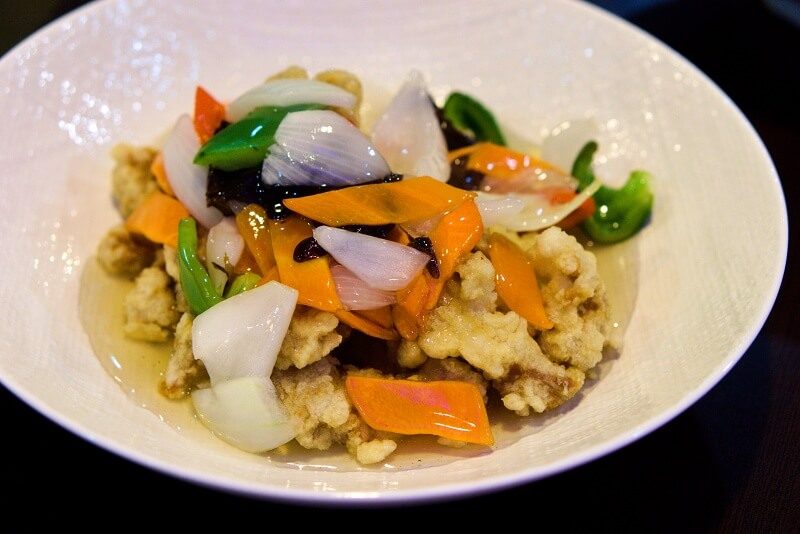 Hefty portion aside, this tangsuyuk was pretty underwhelming. I had no complaints about the crunchy batter and pale, sticky syrup, but the pork was bland and chewy.

It even paled in comparison to the crunchy and fresh assortment of vegetables. That’s saying something. 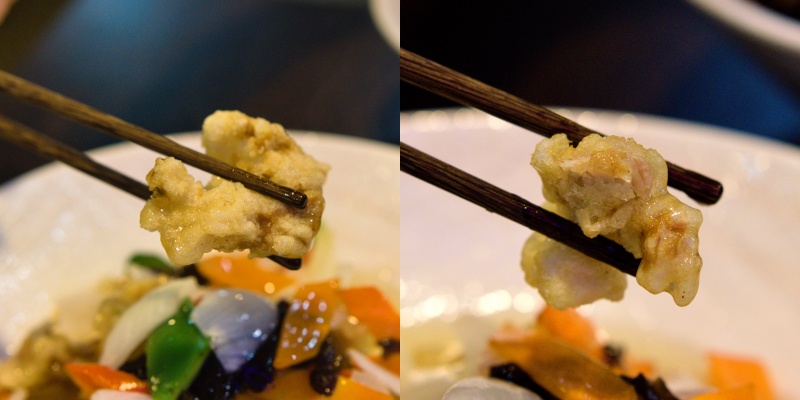 Once again, I found the ratio of meat to batter to be very off. Do I just have bad luck with tangsuyuk? You tell me.

Dong Bang Hong is a reliable, albeit pricey spot to visit for Korean Chinese cuisine. After all, jjajangmyeon isn’t the only dish they offer. 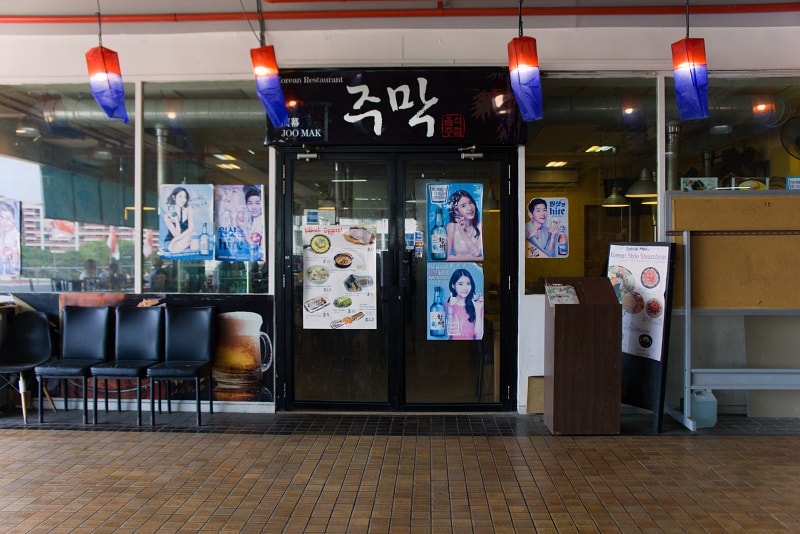 Joo Mak is an elusive Korean eatery on the fourth floor of Beauty World Centre. This humble and cosy establishment serves up authentic Korean cuisine, though little has been said about their jjajangmyeon.

There were only two other occupied tables when I arrived at 2pm on a lazy weekday afternoon. 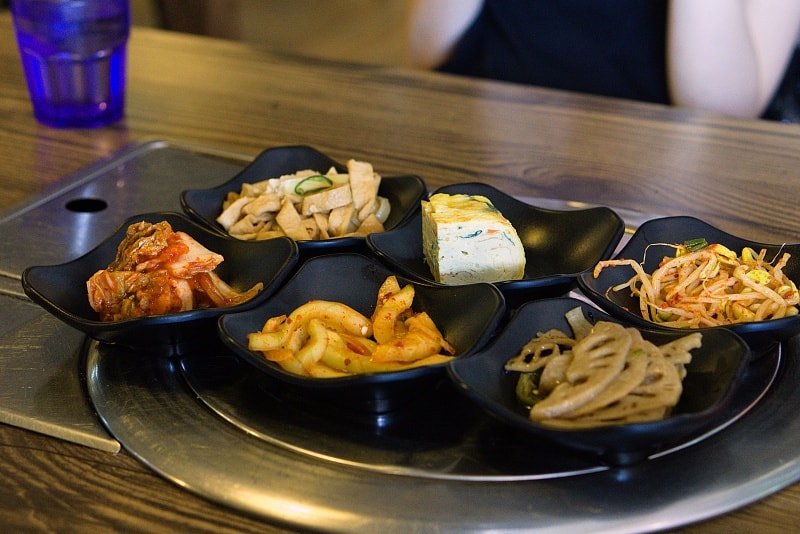 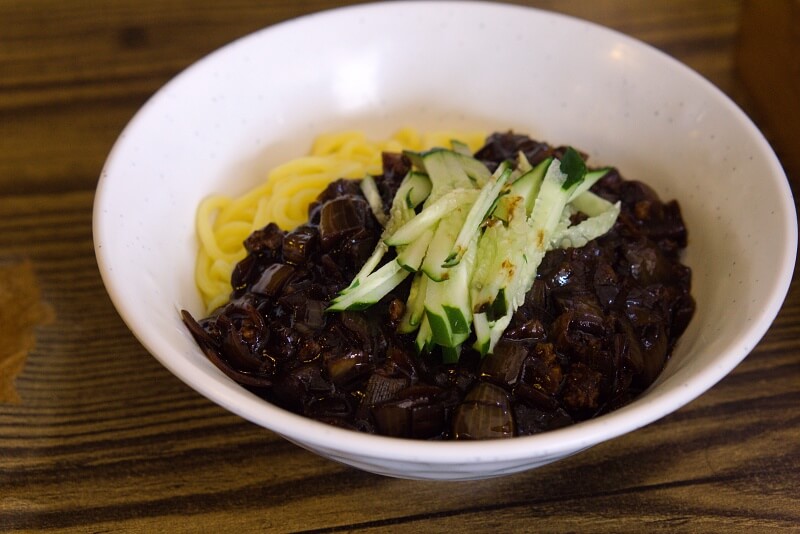 A relatively unassuming bowl of Black Bean Sauce Noodles (S$12) was set down before us.

Thick yellow noodles peeked out from within the mass of dark jajang sauce. One bite in, and I was struck by how intensely flavourful this jjajangmyeon was. 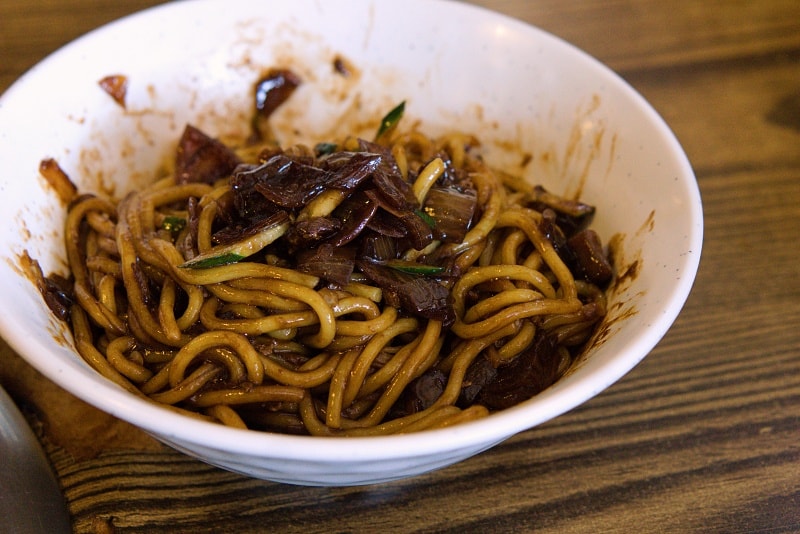 I mean, wow. How savoury, how smoky!

In fact, I think was the heartiest and most satisfying jjajangmyeon out of the three. Even the sweet, crunchy onions and morsels of meaty pork were so, so, SO gratifying.

The only downside? That jelak feeling set in all too quickly, though it’s no big deal if you have a larger-than-life appetite. 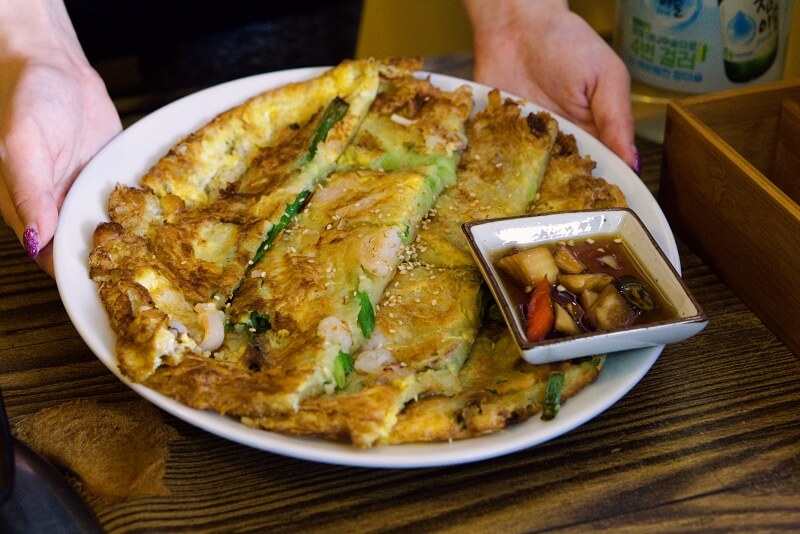 To my horror, there was no tangsuyuk on the menu. I didn’t want to only feature the jjajangmyeon and wondered: what’s a good complementary dish? Fluffy, doughy, and crispy-edged, this massive pancake was loaded with juicy prawns, squid and chives. Pair it with the accompanying dip of chilli and pickled onions, and you’re all set.

Joo Mak may be holed up among the Beauty World cluster of Korean restaurants, but they’re no small fry. I’ll be back.

Call me cliché, but the jjajangmyeon at O.BBa Jjajang still has my vote.

Jjajangmyeon, no matter how unphotogenic or messy, will always have a special place in my heart.

As for tangsuyuk, I think I’ll stick to the sweet & sour pork I’m used to.

To put it simply:

What about you? Where’s your personal favourite spot for jjajangmyeon?