As far as Korean cuisine goes, it’s clear that Singaporeans are going krazy for it. From bingsu to Korean fried chicken to Korean BBQ, if there’s a Korean trend out there to be a part of, it’s bound to escalate to some level of cult following.

But did you know, there’s a small presence of Korean-Chinese eateries here as well? What sets this fusion cuisine apart from your run-of-the-mill Korean fare is the inclusion of dishes that use stir-fry techniques and hand-made noodles.

In fact, it isn’t a cuisine that has been around for too long, having been introduced during the 19th century in the port city of Incheon, where most of the ethnic Chinese population of Korea lived. Hwang Sil Korean-Chinese Restaurant has been around for two years, and is owned by a lovely Korean couple who pride their cooking on authenticity and earnest intention of sharing this unique fusion cuisine with Singaporeans. 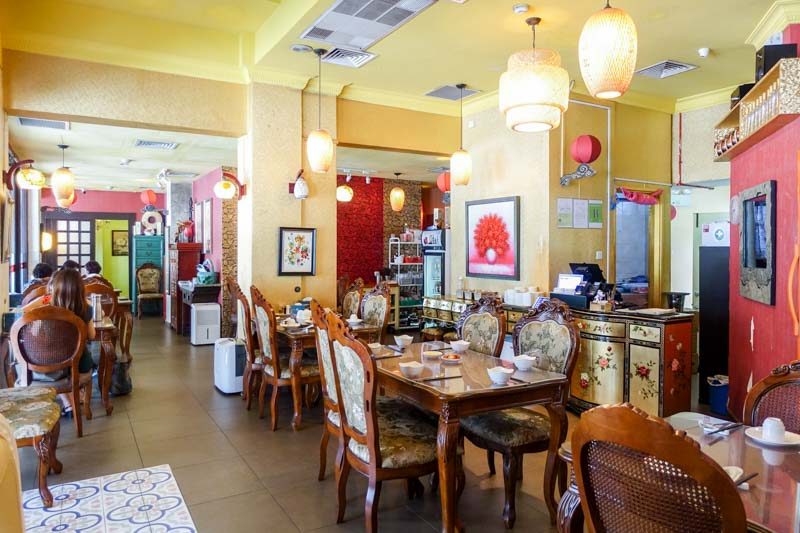 The restaurant may look cluttered upon entering, but with patient observance, you’ll start to see a medley of both Korean and Chinese influences splashed across the dining space. From the vases, to the wooden carved cabinets and even to the clashing colour scheme painted on the walls; the mismatch grew on me and I started to feel like I’d walked into someone’s home.

Here, you have to go for the highlights of the cuisine, because you’re guaranteed homemade creations. Also, remember to bring along two or more friends as the portions are hearty and generous! The first dish you should aim for is the Tang So Yuk ($28/$38) (sweet & sour pork). What sets this version apart from the more well-known Chinese one is that the sauce is served separately and is thicker, more savoury and less acidic. 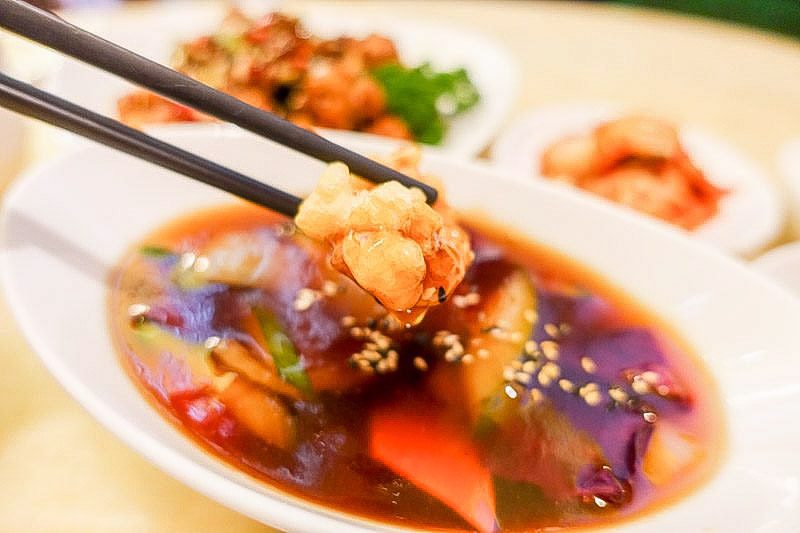 The deep-fried pork chunks were sizeable and the portion was way too much for just two of us to finish. But that doesn’t mean that we didn’t try to; it was crunchy, tender and the sauce was addictive. 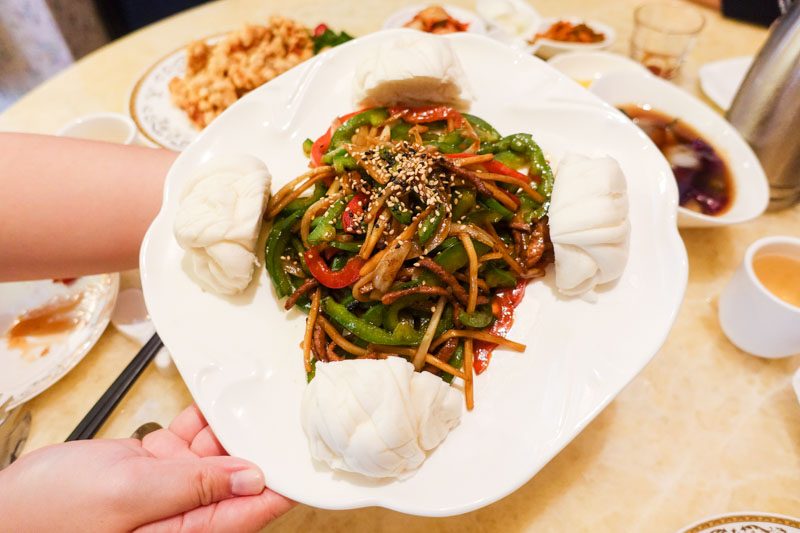 The Go Chu Jab Chae ($30/$40 for pork and $40/$50 for beef) (stir-fried chilli peppers and vegetables with steamed bun) was a personal favourite of mine. What stood out in this dish was that we could actually taste the slight char as a result of stir-frying on high heat and it was absolutely amazing! 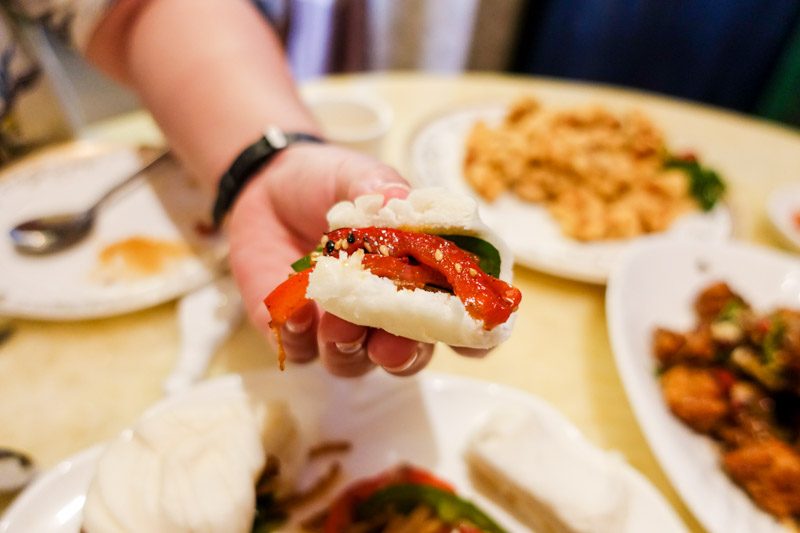 There was a great mix of salty, sweet and smoky, and even when all the buns had run out, we still kept returning to finish off all the vegetables. Although not exactly the most appetising to look at, their Jja Jang Myeon ($13) (black soy bean paste noodles) is actually the dish people come here for. All the noodles are hand-made daily, and any leftovers are actually thrown out because keeping it overnight would result in a totally different texture and taste. 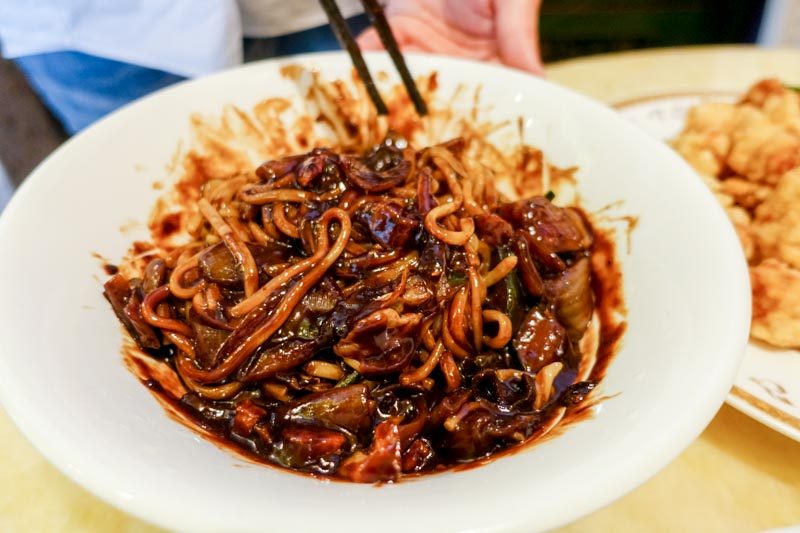 So, how did it fair? The noodles were incredibly silky and bouncy; that in itself made us want to eat more. The sauce was thick, but it wasn’t rich. In fact, it had complementary elements of salty and sweet.

The vegetables inside surprisingly remained crunchy and we only wish we could work up a bigger appetite to finish it off. 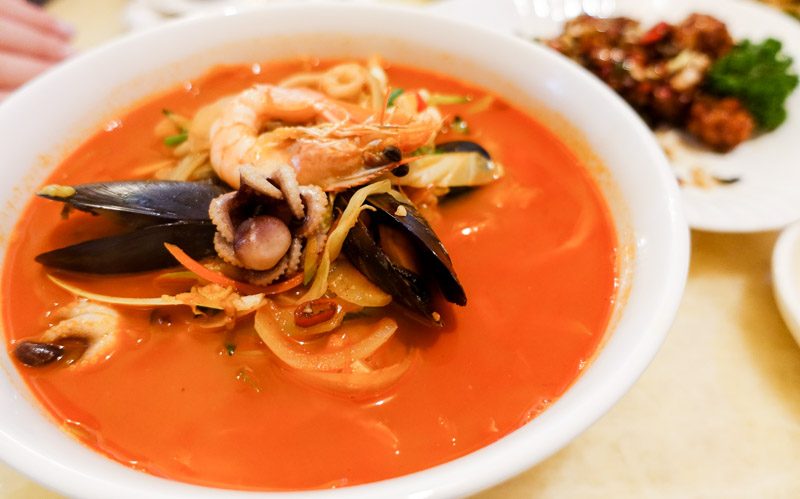 I still think about the Jjam Bong ($14) (spicy seafood noodle soup) till this day, especially when the weather’s grey. Personally, I’d never eaten any spicy seafood soup like this because the dish tends to lean towards a sour profile, but that’s what got me hooked on the first sip. The seafood was ocean-fresh and very sweet, and of course, the noodles had an excellent texture just like the bowl before. It made me realise the shame that so much leftover hand-made noodles has to be thrown out on a daily basis. 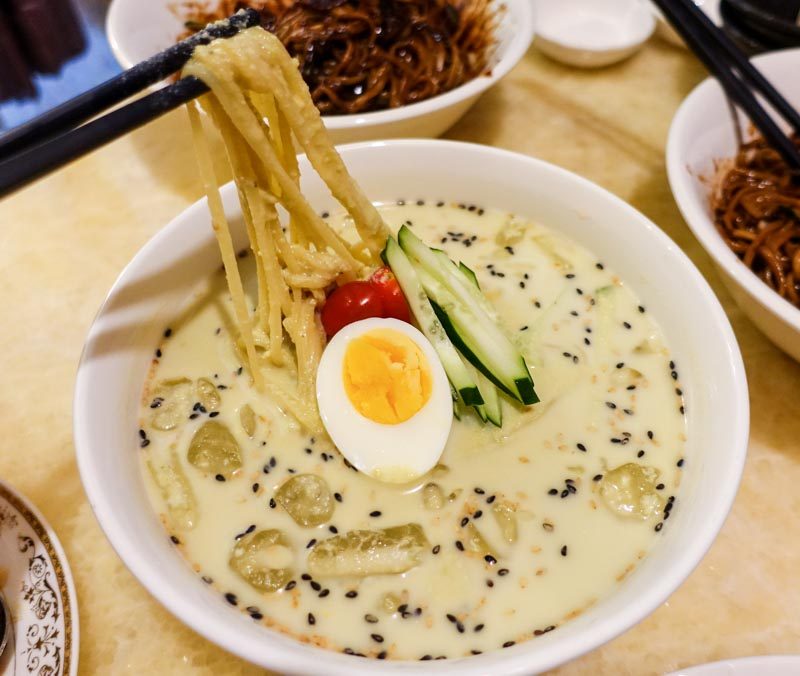 This final dish will undoubtedly garner either an absolute like or dislike just based on the name itself. The Kong Guk Su ($16) (cold soybean noodle) is a very traditional Korean-Chinese dish that is best served when it’s sweltering outside, and even has ice cubes in it!

I know I like soybean drinks, but this soup had me really struggling to appreciate it. I understood its purpose, but somehow the starchy nature of the noodles really clashed with the viscosity of the soybean soup itself and it was a bit much for me.

My dining partner, on the other hand, absolutely lapped it up.

Although Korean-Chinese cuisine takes some warming up to truly savour it, there are some aspects of it that I have personally learned to take a liking to.

Incorporating plenty of stir-fry techniques and insisting on making their own noodles, Hwang Sil Korean-Chinese Restaurant has played on these two key elements to their favour.

As for me, all I know is that I can’t get that spicy seafood noodle soup out of my head. So, here’s hoping there’ll be more rainy days to come.

Previous articleStock Up On Snacks From 10,000 International Brands At This Convention In Suntec From 1- 3 June
Next article10 Insane Asian Drinking Games To Try Besides The Usual Beer Pong & King’s Cup