Believe me when I say that I’ve had my fair share of fried rice in Singapore. From homemade fried rice to the ever-popular Din Tai Fung egg pork chop fried rice, or even my standard tom yum fried rice order at my nearest zi char stall… But now, I think I finally found one stall that tops it alll. 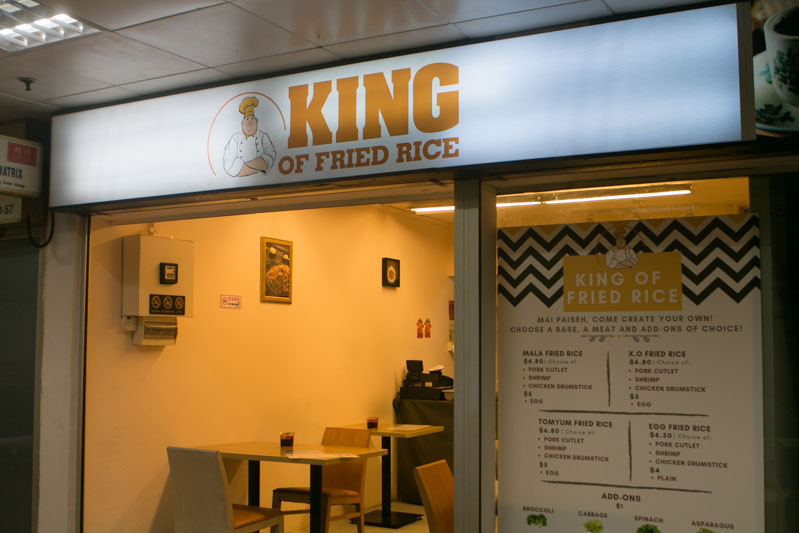 A plate starts from S$4, and depending on if you’re adding any meat, it can go up to S$6.80. Still pretty cheap, if you ask me. 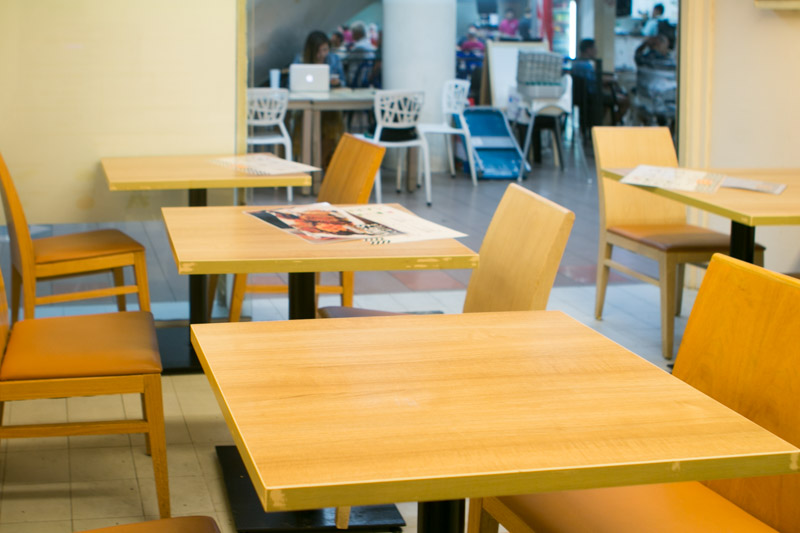 If you’re looking for restaurant-quality seating, you’re definitely not going to get it here. Think more along the lines of hawker centres, where seating is sparse and simple.

While it’s entirely up to you as to which meat you’d like to pair with your fried rice, here are our suggestions. 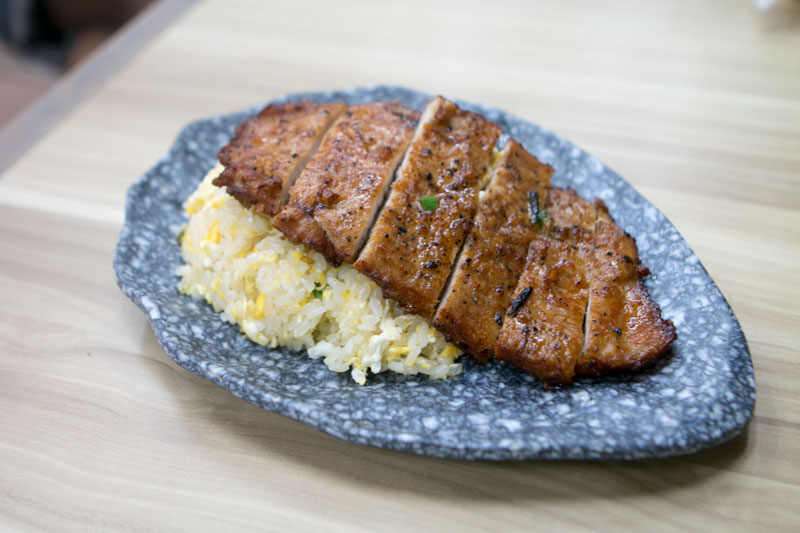 King of Fried Rice’s Egg Fried Rice with Pork Cutlet (S$6.50) is as simple as it gets. Rice is fried with egg and spring onions, and topped off with a pan-fried pork cutlet that’s been chopped into thin pieces. 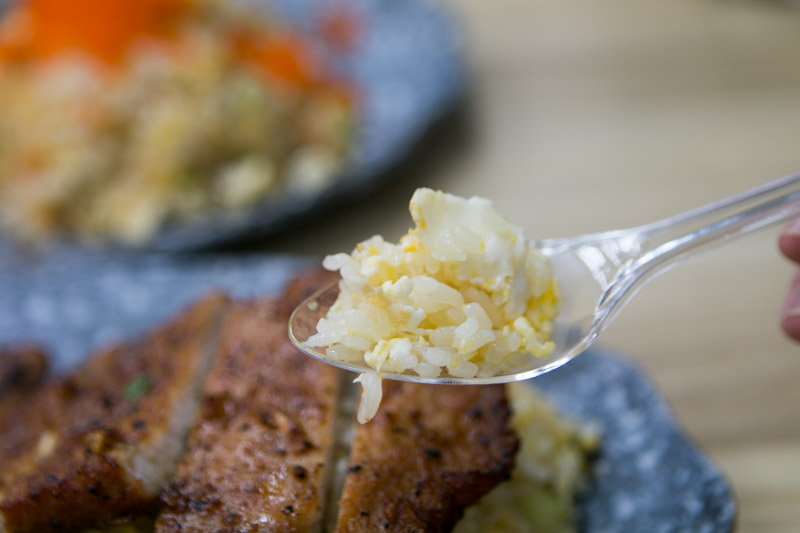 The egg fried rice itself was an absolute delight. Though it only consisted of rice, egg and spring onions, I could taste a natural sweetness from the egg, which went hand in hand with the fluffiness of the fried rice.

If you prefer saltier food, King of Fried Rice’s Egg Fried Rice might not be for you, because it is considerably plainer than other fried rice dishes.

Despite that, I found that the rice was really well tossed (or even steamed, and I suspect with butter). Every single grain of white rice had a tinge of sweetness and buttery moisture, and there was a good wok hei taste to it as well. 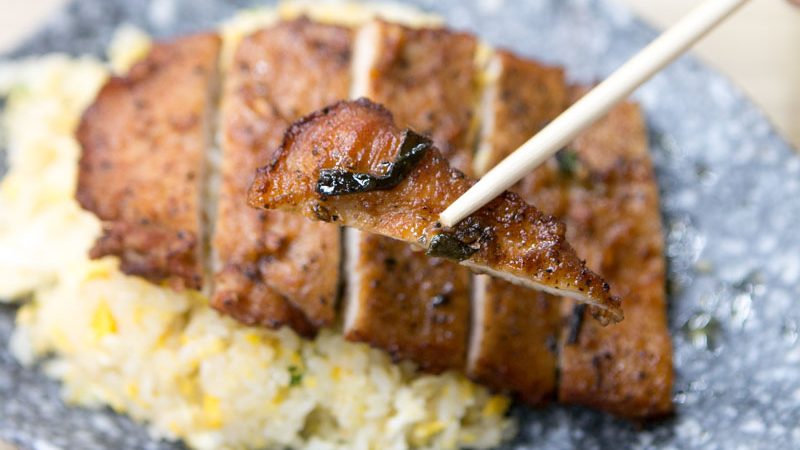 I can’t even begin to describe how amazingly delicious the pork chop was. It was grilled till the skin was slightly caramelised, with a thin layer of honey-like oil, but the meat was delightfully springy and soft.

I loved that I had zero problems biting into the pork chop as it had a good bite to it and didn’t take too much jaw work. The tender meat had a zingy peppery aftertaste, which whetted my appetite.

Pairing the naturally sweet and buttery egg fried rice with the tender and peppery pork chop was like a match made in heaven. I’m not even kidding, I downed the whole plate within minutes. Of course, let’s not forget King of Fried Rice’s homemade chilli oil. I’m a huge spice lover so I had high expectations for this lethal-looking chilli oil, and boy, it didn’t disappoint a single bit.

The chilli oil was nutty, smoky and peppery, with a strong salty and umami taste. I really enjoyed having it with the Egg Fried Rice, especially since the chilli oil’s delicious heat spread through my mouth slowly.

It’s not as lethal as it looks though. To me, it’s actually more salty than spicy, and it was incredibly aromatic and fragrant.

I was so bowled over by its homemade chilli oil that I asked the store owners if they were selling it, but unfortunately, they’re not. 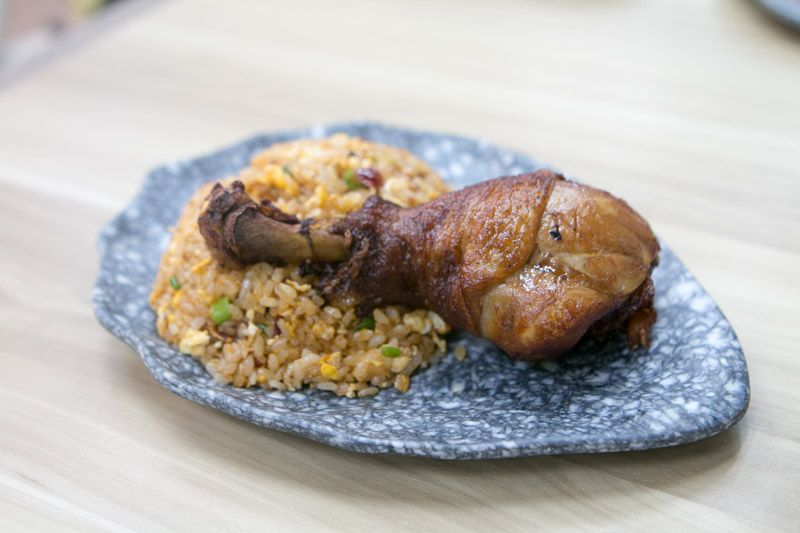 For just S$6.80, I was certainly impressed by how big the Chicken Drumstick was, and its gorgeous char was appetising too. 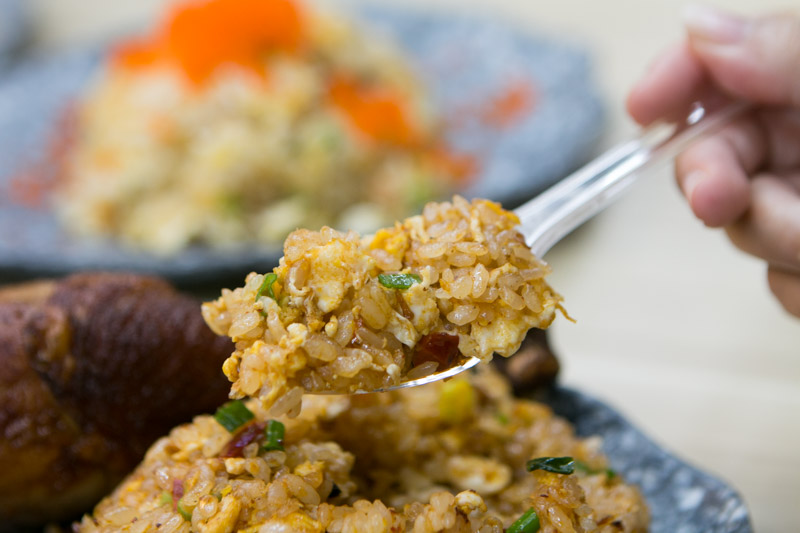 There was a really strong Sichuan pepper taste to the Mala Fried Rice, and though the rice had been tossed with chilli slices, spring onions and an egg, the rice actually wasn’t too spicy or oily for me.

There was still that iconic numbing feeling that typically comes with mala dishes, but its aftertaste was oddly sweet to me, as if sugar had been added to the rice.

While the drumstick’s meat came off the bone easily when I prodded it with my chopsticks, I felt that the meat nearer to the skin was a tad too dry. However, the meat near the bone was deliciously moist and tender. Thai food fans will enjoy Tomyum Fried Rice with Shrimp (S$6.80) for its signature tangy, sour and appetising flavours. We paired it with shrimp because tom yum is typically served with seafood like prawns, and thought it would go well together. 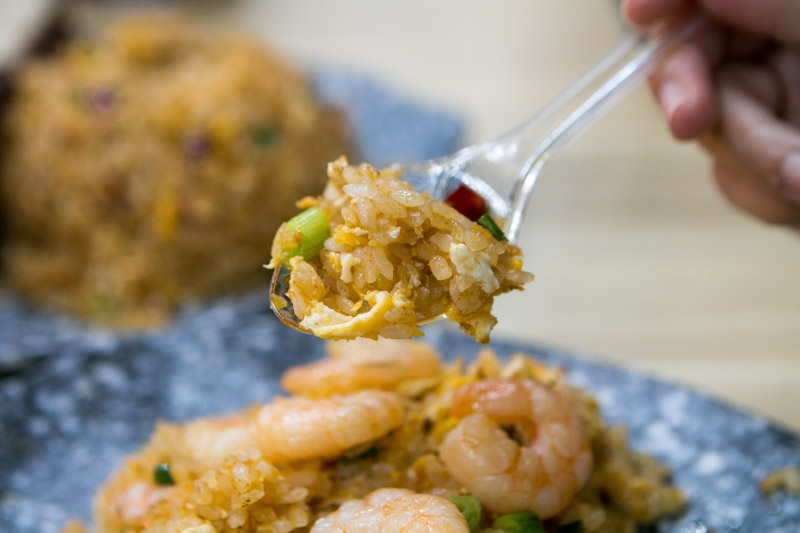 The Tomyum Fried Rice reminded me exactly of the tom yum goong I had in Bangkok. It wasn’t overly sour or spicy, but had a strong lemongrass and lime taste. It was really fragrant and I could taste fried garlic as well as hints of fish sauce. While the shrimp used in this dish wasn’t anything extraordinary (it wasn’t marinated or fried in any special herbs or sauces), I especially loved it because it was really fresh. The shrimp was taut, springy and firm, and literally burst in my mouth when I bit into it — it was that fresh. 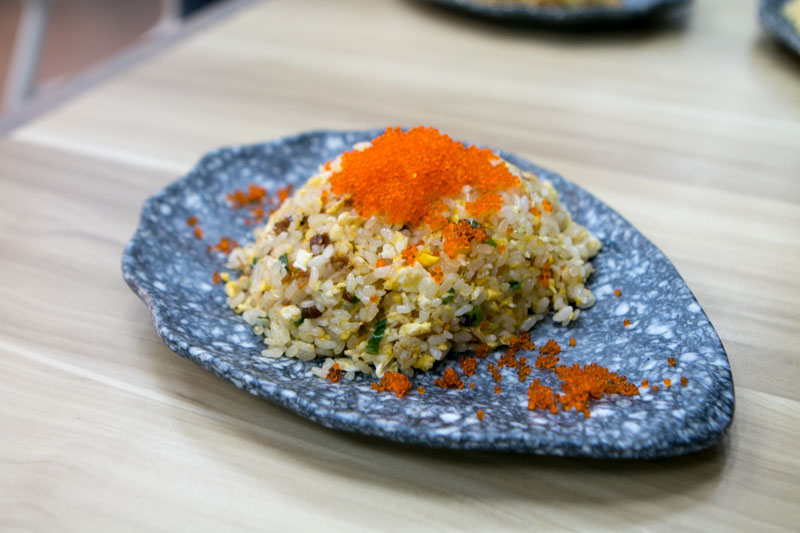 Last but not least, we tried King of Fried Rice’s X.O Fried Rice with Egg (S$5) and chose to top up S$1 for tobiko. If you’re not a fan of tobiko, you can also choose from seven other add-ons, such as shimeji, cabbage, asparagus, spinach or a sunny-side-up. 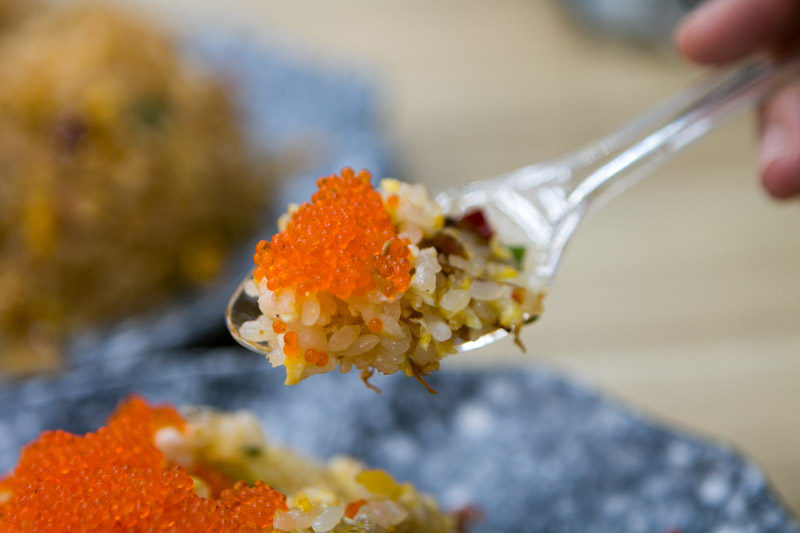 While I couldn’t really taste the spicy X.O seafood sauce, I enjoyed the roasted and smoky taste from the pan-fried dried shrimp. To some extent, it even reminded me of the fried bacon bits you’d get in a plate of carbonara.

King of Fried Rice was super generous with the tobiko as well and I absolutely loved the little bursts of saltiness in my mouth.

This was the best fried rice I’ve had, hands down. The rice was fluffy and moist, and each grain was coated well with the relevant flavours. And there were so many flavours: the natural sweetness from the egg, piquant sourness from the tom yum, tongue-numbing peppery goodness from the mala, and the smoky and roasted taste from the X.O sauce.

While Golden Mile Tower is definitely a place I wouldn’t pass by on a regular basis, I absolutely and whole-heartedly enjoyed my meal at King of Fried Rice. In fact, I’d go so far as to say that it’s better than most zi char places and restaurants I’ve been to.