If you’re like me, and you’re the kind of person who uses the same one knife to cut just about everything in the kitchen, then chances are, not only are the knife gods having aneurysms right now as we speak, we’ve also been doing food prep wrong this whole time.

Don’t fret, though—that’s why you clicked in. I’m here to help with your knife, not get into strife. Here are 7 different kitchen knives so you’ll know how to tell your cleaver from your paring knife. If you can have only one knife in your kitchen, let it be the chef’s knife. No stranger to most households, the chef’s knife is one of the most versatile knives to work with.

It has a long, broad blade, and is widest at the handle, tapering to a finely-pointed tip.

Like I mentioned, the chef’s knife is an all-rounder. Though, it’s used mostly for chopping and dicing, because its thick heel area can withstand heavier duty work. The curved blade also means it can easily rock back and forwards on the chopping board when you chop and dice.

You can purchase a chef’s knife here. Sometimes called a slicing knife, the carving knife is long and slim. Some might recognise it from when your relatives bust it out at Thanksgiving or Christmas dinners.

The carving knife has a long and narrow blade, designed for less resistance when slicing so that it produces cleaner, more uniform cuts.

Because it can produce thin, even slices, the carving knife is great for serving meats like poultry, beef, and lamb, but is not limited to just that. It can also be used on larger fruits and vegetables or even cakes because they’re long enough to slice through in one, smooth motion.

You can purchase a carving knife here. The bread knife is marked by its long, toothed edge that works fantastic on bread and cakes alike.

The bread knife has a serrated edge that acts almost like a saw, and is especially great for cutting through crusty items like baguettes and sourdough. The jagged edge allows you to cut through slightly tougher textures without misshaping your bread.

Aside from the aforementioned function of cutting through crusty bread while maintaining their shape, the bread knife is also good for softer confectionery like cakes and sponges. This is because its serrated edge doesn’t knock the air out of your products so it doesn’t damage their overall shape. The bread knife is also a handy alternative for cake levellers if you don’t have one, because they can just as easily even out your sponge cakes after baking.

You can purchase a bread knife here. Many may recognise the cleaver as butcher knives because of their large appearance and generally heavy-duty work.

Its flat, rectangular blade is the cleaver’s defining feature, but also the fact that they’re most of the time very heavy. This weight helps when you’re chopping through thick meats or bones. Sometimes, you may also look out for a hole near the end of the knife, which is designed such that the cleaver can be hung up when not in use.

As mentioned, the cleaver is great for the butchery process—which includes chopping raw meat and cutting through bones. And because of its bulky nature, it’s generally exclusively used on raw meats rather than cooked food. You can also use the broad and heavy surface of the knife to crush garnishes like ginger and garlic against a chopping board.

You can purchase a cleaver here. ‘Santoku’ translates to ‘three uses’ in Japanese, and that’s exactly all you need to know about your Santoku knife. In Japan, it’s considered one of the most popular types of kitchen knives because of its versatility.

Most Santoku knives have depressions along the edges in order to prevent food from sticking while you’re chopping, so it’s easily identifiable from that. Also, the Santoku knife usually has a long, slightly tapered blade with a drop point at the tip for precision work.

Generally an all-rounder, Santoku knives can be used on most things from vegetables to fish. Particularly, they can be used to prepare sushi and sashimi due to their non-stick nature.

You can purchase a Santoku knife here. 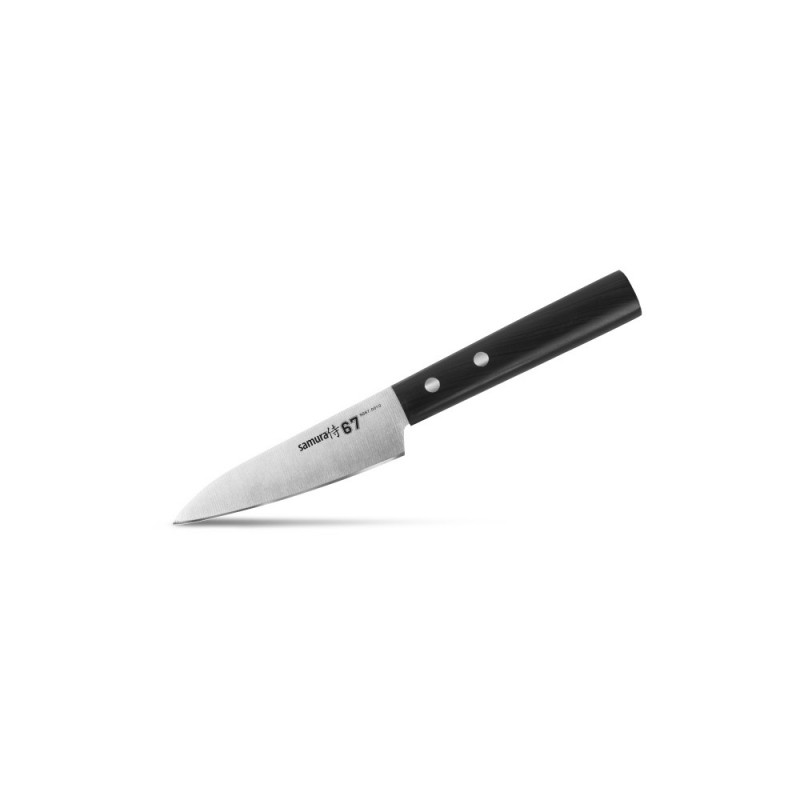 The paring knife is generally short and slim with a pointed tip. It also tends to be light. You shouldn’t have to spend much on expensive paring knives and you can generally get a decent paring knife at an average price of about S$20.

It’s shorter than most knives and can also be identified by its evenly-sized blade.

It’s used for delicate work, like fine slicing or precision tasks. It’s great for working with smaller pieces of meat due to its handy size.

You can purchase a paring knife here. A boning knife is a great addition to your kitchen if you’re looking for a handy tool to debone or butterfly meats and fish. It’s especially handy for cutting around the bone without damaging the meat.

It can easily be identified by its curved bottom and narrow end, but it’s not to be confused with a filleting knife, which is thinner and finely shaped at the tip.

As its name suggests, it’s a knife for removing bones from fish and meats, but at the same time great for butterflying meats like chicken chops. It should be flexible and light, and easy to manoeuvre.

You can purchase a boning knife here.

Kitchen essentials explained: 11 types of pots & pans for your arsenal

Produce explained: 7 common stone fruits you ought to know

HotChic², Turf Club: “It holds the potential for so...