A testament to the authenticity of a good Japanese izakaya would be the hoard of native regulars crowding the area, speaking over each other in their mother tongue whilst chugging down mugs of alcohol and munching on an assortment of finger food. 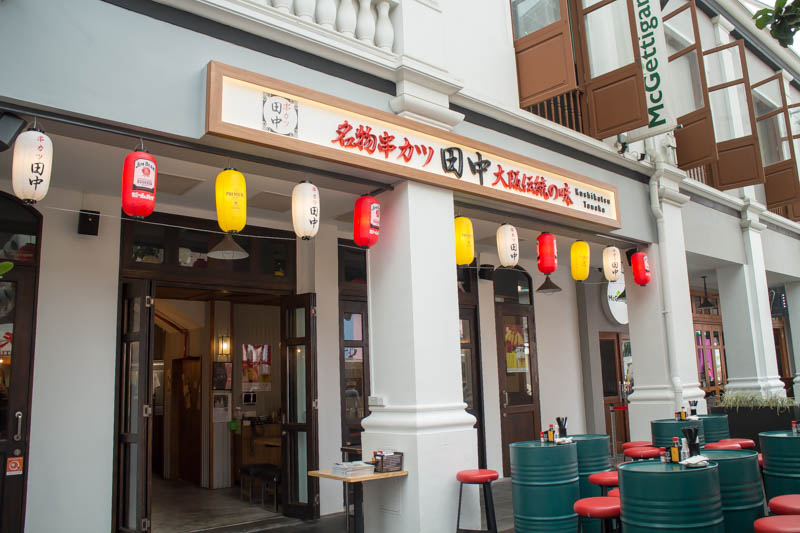 Well, that was the exact same scene I witnessed when I stepped into Kushikatsu Tanaka for dinner on a Tuesday evening. At 6pm, the restaurant was already half-filled with groups of Japanese salarymen (most of them already wearing a red flush on their faces), happily drinking and having a good time.

Hailing from Osaka with over 265 outlets worldwide, Japan’s largest kushikatsu (fried skewers) chain—Kushikatsu Tanaka—opened its first outlet in Singapore in December 2017 and has then grown to become a frequent hangout spot for many local and Japanese patrons. 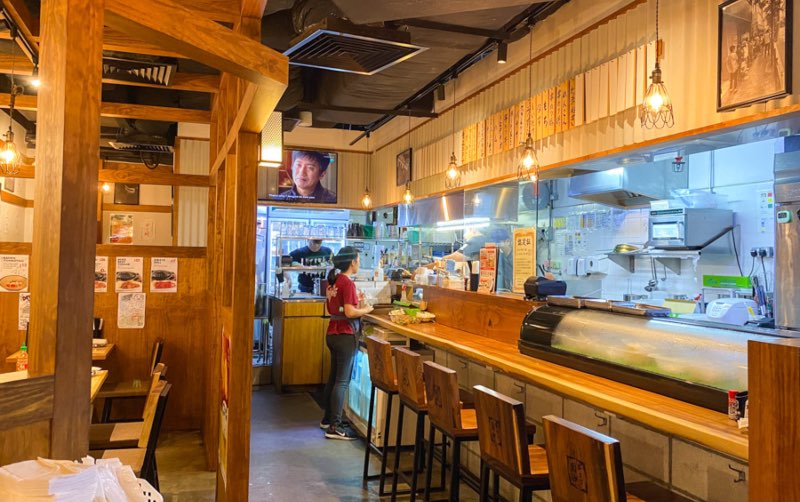 Strategically located in Merchant Court at Clarke Quay, Kushikatsu Tanaka, bears the appearance of a traditional izakaya with assorted traditional lanterns hanging along its entrance, random Japanese posters plastered on the walls (take a close look at the posters as some of them are hand-drawn) and cheerful music playing in the background enhanced by random ringing of bells and loud cheers from the servers. 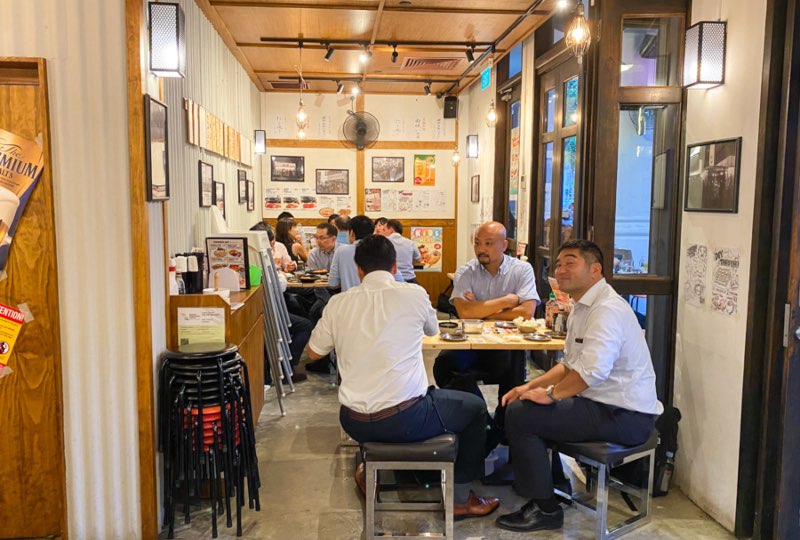 Spoilt for choice with over 50 menu items, from a variety of kushikatsu, yakiniku (grilled meat), nabe (hot pot) to DIY takoyaki (octopus balls), my partner and I opted to try the restaurant’s new grand menu items which were just rolled out recently. There’s no better way to start off a meal in an izakaya then with an appetizer that screams freshness in every bite. Unlike other izakaya‘s that serve their tako wasabi raw, the octopus of Kushikatsu Tanaka’s Tako Wasabi Ae (S$12), were slightly par-boiled before being tossed in wasabi leaves sauce. The par-boiled octopus tentacles, which were cut in thick fleshy bite-size pieces, had an enjoyable gum-like chewy texture and a subtle briny taste that paired superbly well with the punch of heat attributed by the wasabi. Not only was this dish an amazing appetiser, it also acts as a good palate cleanser, refreshing and resetting my tastebuds after some of the other dishes which were on the heavy side. 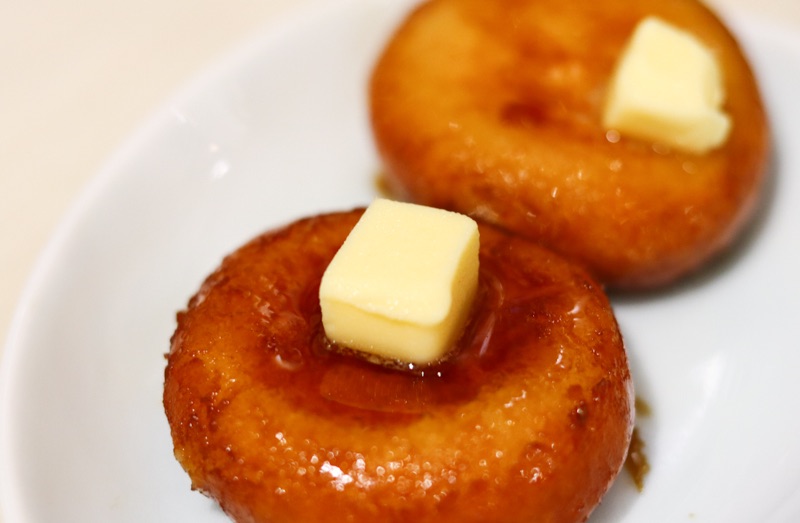 We were introduced to a unique sweet-savoury appetiser, Cheese Imo Mochi (S$6), by our server who mentioned that it was a must-try signature item. Mini pancakes immediately came to mind when the dish was placed on our table. “How is this an appetiser?”, I thought to myself. 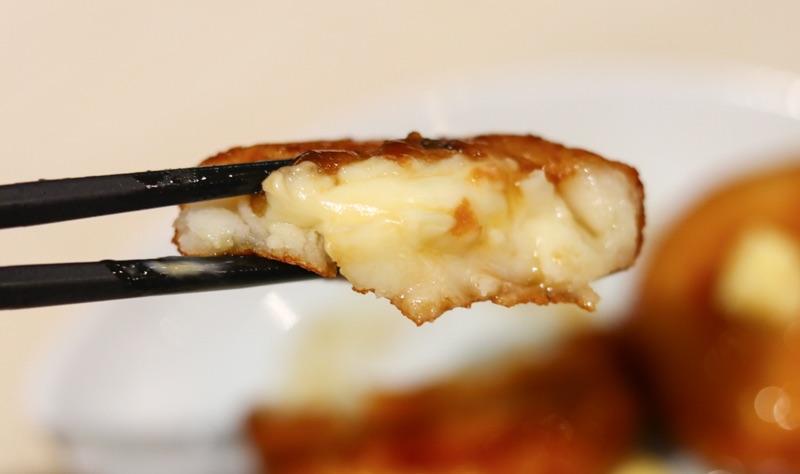 Later did I realise that the Cheese Imo Mochi was actually a pan-fried potato mochi topped with sweet teriyaki sauce and a cube of butter. I enjoyed the contrast between the rich savoury flavour of the melted cheese and the sweetness from the teriyaki sauce. This dish might look exactly opposite from its taste, but trust me, the weirdness will eventually fade off and you will grow to enjoy it as much as I did. 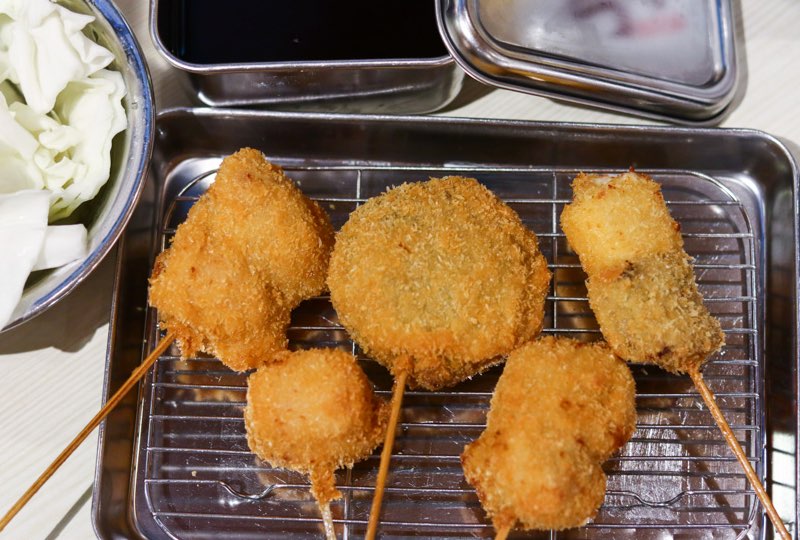 You can’t miss out on kushikatsu when you are at the outlet of Japan’s largest kushikatsu chain, can you? In order to ensure that we could still stomach the rest of our dishes, my partner and I shared the New 5 Kind Kushikatsu (S$10), which consists of Mochi Bacon, Buta Shiso, Tomato Bacon, Unagi Cheese and Shiitake Nikutsume. 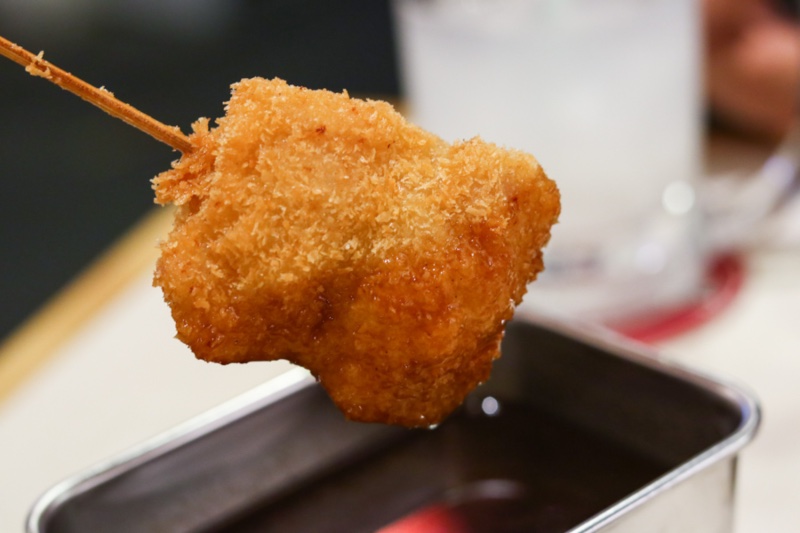 Cooked in Tanaka’s secret batter and a mixture of corn oil with a beef fat blend, the batter on the skewers was light and clean—crispy without being greasy at all. My tastebuds were prancing to the upbeat music in the background as I savoured the skewers together with Kushikatsu Tanaka’s signature brown dipping sauce that was tangy and undeniably addictive. 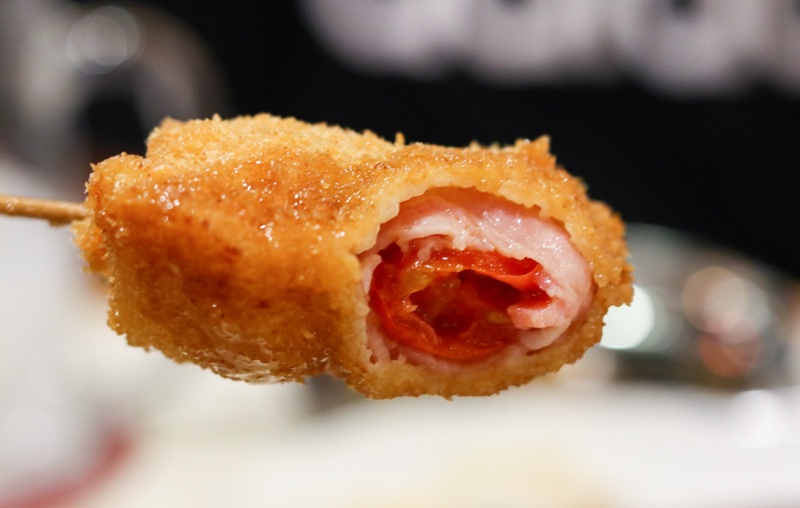 Of the five kushikatsu, my favourite was definitely the Tomato Bacon. Despite them being simple ingredients, when coming together, the combination of tomato wrapped in bacon packed a punch and left an impression. A bite into the golden-brown crust and I could taste the tart juices from the cherry tomatoes which balances out the richness of the bacon. This flavour was made better with a drizzle of the dipping sauce, adding a touch of umami to the skewer itself. 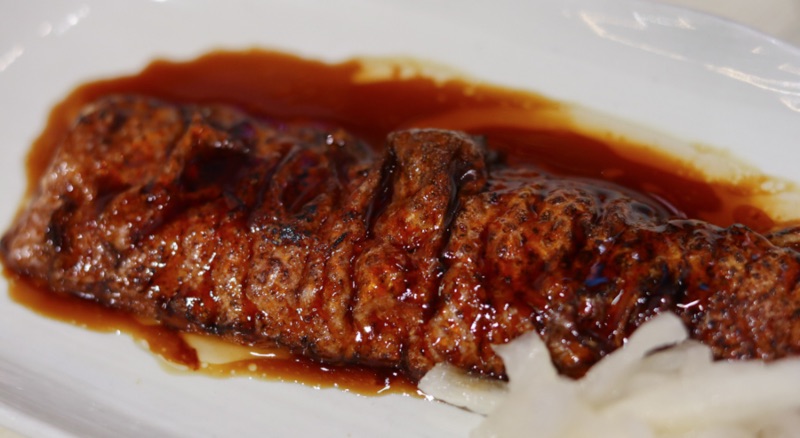 Salmon Belly Teriyaki (S$10) was the next new grand menu item that we tried. In my opinion, this was a slight disappointment as the dish was rather mediocre. The teriyaki sauce was a tad bit overpowering, masking the natural flavours of the salmon belly. That aside, I have to admit that the salmon belly was incredibly rich and delicate. The fish literally melted in my mouth, leaving a tint of glossy oiliness on my lips.

My recent trip to Yakiniku Like opened my eyes to yakiniku-style dining and since then I’ve been looking for a contender that will rank on par or better than this fast-food yakiniku restaurant. It looks like I’ve found a healthy competitor. 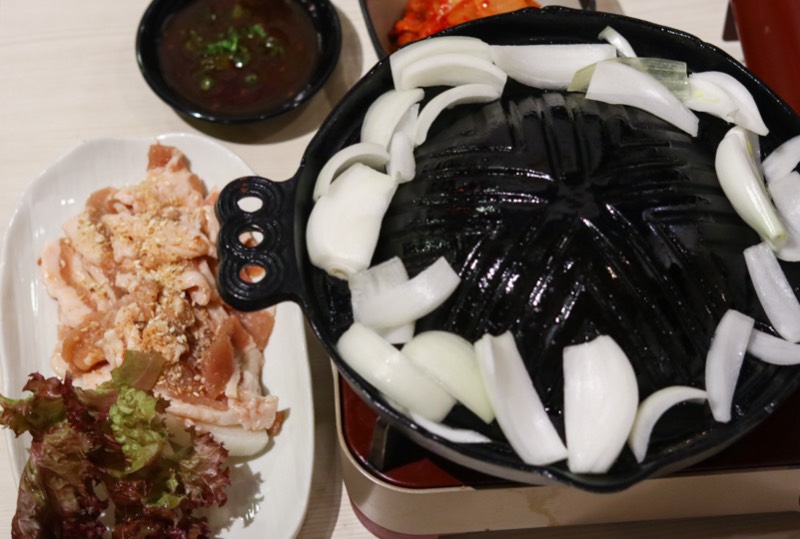 Although yakiniku is not Kushikatsu Tanaka’s speciality, having tried their Yakiniku Pork With Kimchi (S$12), the restaurant is certainly on the right track in hitting the spot. For just S$12, we were served 140g of sliced pork seasoned with mildly spicy shoyu miso sauce and a side of kimchi. The pork was so thinly sliced that it took less than a minute or two to be fully cooked. With approximately a 50:50 proportion of fat-to-meat ratio, the seasoned grilled pork slices were savoury on its own, needing no other sauce to accompany it. For maximum flavour and texture explosion, try grilling the kimchi with the pork, then consume them together—you will definitely thank me for this insider tip! Possessing a sweet tooth, no meal is complete without dessert. At Kushikatsu Tanaka, dessert comes in the form of (yes, you guessed it) fried Cookies and Cream (S$1.20) skewers, made with Oreo cookies, battered and fried. 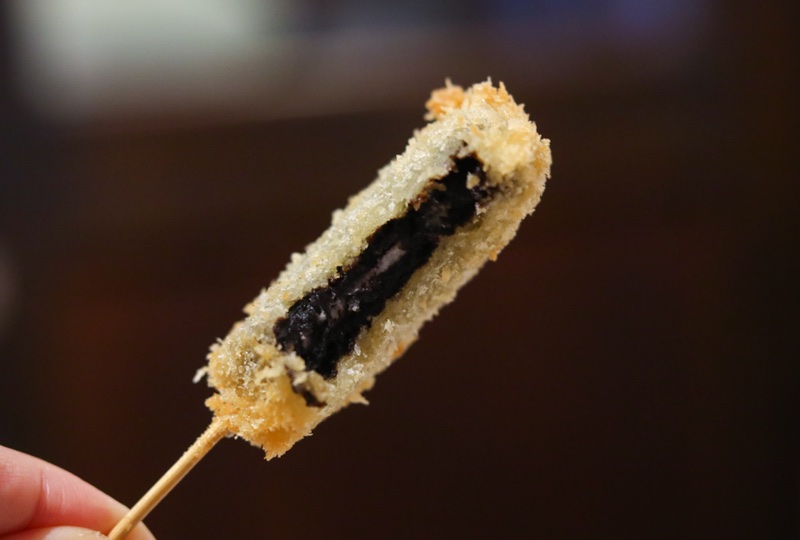 Unlike our regular crunchy Oreos, the cookies in the skewers softened from the frying process. This, however, did not affect its tastiness as the cream sandwiched between melted down in the heat, sipping into the chocolate cookie, resulting in a sweet and soft biscuit that also had a tinge of saltiness from the batter.

At the end of my meal, it was clear to me why Kushikatsu Tanaka could not only survive but prosper in this cut-throat industry. Not only was the food delectable, all their staff were also friendly and approachable, making the dining experience very homely and comfortable.

Not to mention, the place was exceptionally well-ventilated that we left still smelling fresh with no odour of grease lingering on our clothes!

Previous articleSupreme Oreos Are The Most Expensive Cookies Worth Up To US$15,000/Packet On EBay
Next articleTokyo Pokémon Cafe Unveils Cherry Blossom Dishes Inspired By Latest Video Game Series ‘Sword & Shield’ For A Limited Time