Craving some French food but on a tight budget? Le Boullion at Clifford Centre’s NTUC Foodfare serves up tasty dishes at wallet-friendly prices.

This humble stall is manned by Chef Yew Tee, who was the head chef at Saveur and has worked at celebrity chef restaurants like Joel Robuchon and Guy Savoy. With aims to make French cuisine accessible to the general public, he opened a stall in Raffles Place.

The stall offers several French classics, as well as some invented dishes with a French spin on them. 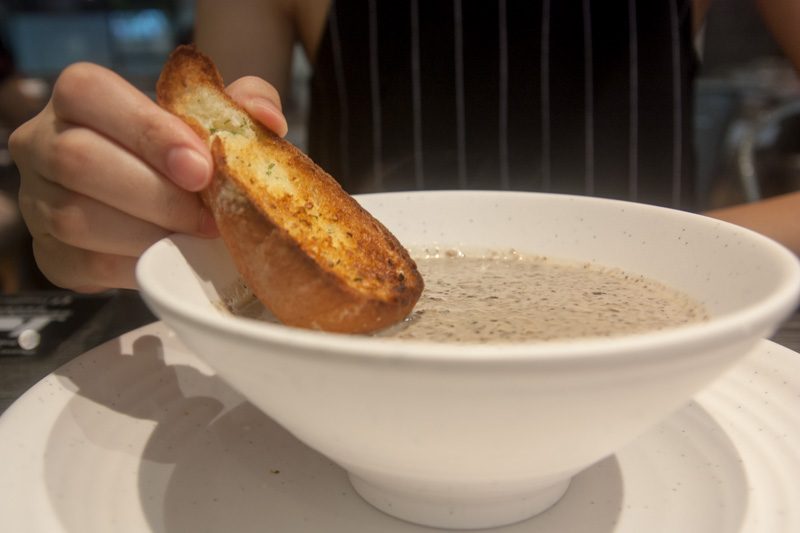 The first dish was the Homemade Mushroom Soup with Garlic Bread ($4.90). Creamy, velvety, with generous chunks of mushroom, this soup is definitely not one out of a can.

We really enjoyed the earthy and wholesome flavour of the mushroom, and the fact that it was served piping hot deserves a mention. 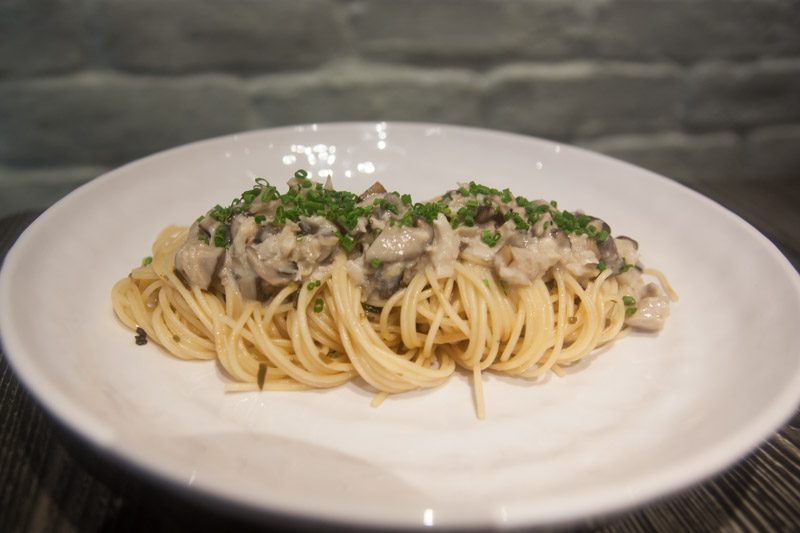 Following that, we had the Linguine Pasta serve with Crab Meat Sauce ($5.90). The pasta was nicely twirled and dressed with a rich and creamy sauce that appeared to be chock full of mushroom and crab goodness. 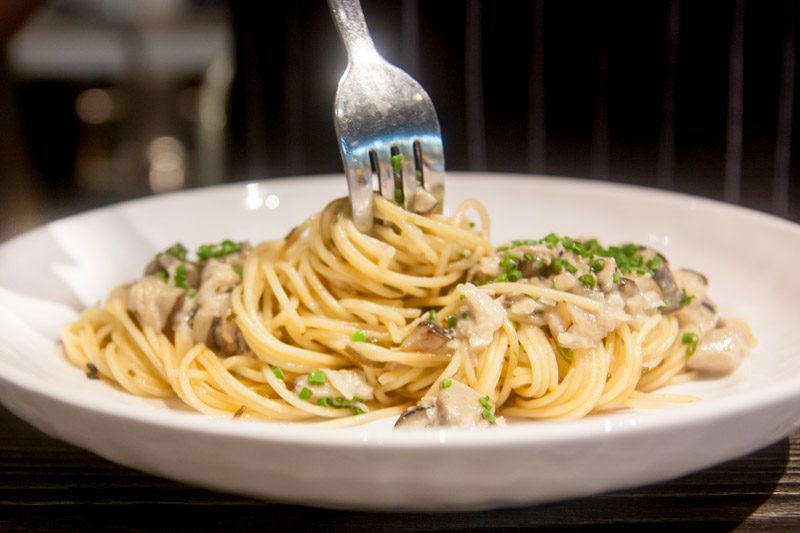 The pasta was perfectly cooked, while the sauce coated it well. Although the sauce was creamy, it did not overwhelm the delicate flavours of the ingredients. Overall, this was a cohesive dish that we could keep on eating. Another pasta dish, the Braised Pork Belly & Taguatelle Pasta ($8.90) was loaded with pieces of pork belly that were rich and tender. The slightly acidic tomato sauce cut through the fattiness well and prevented us from getting too jelat.

This pork belly was a step above our typical sio bak (roast pork), with incredibly tender meat and fat that melted in our mouths. However, we would have liked the skin to be served crisps. 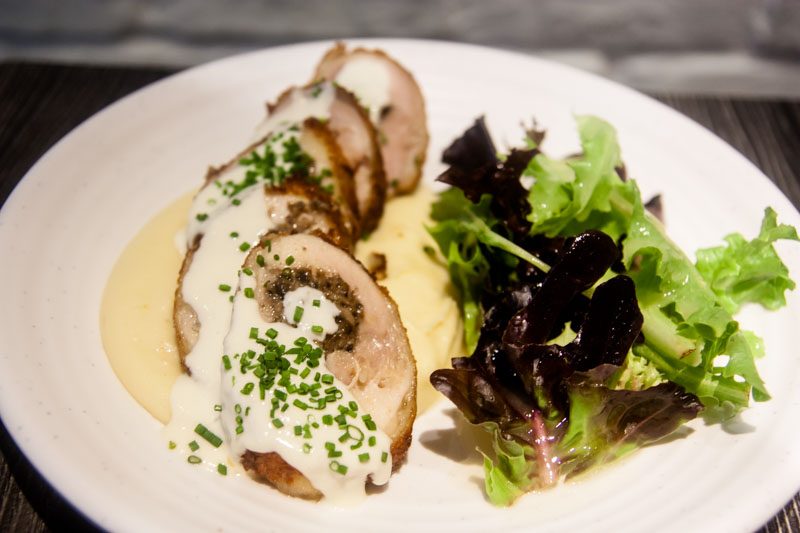 On with the mains, the Chicken Roulade with Cheese & Mushroom Stuffing ($8.90) was a steal which we definitely would be back for. Chicken rolled up with mushroom and drizzled with a cheese sauce; could it get any better?

The chicken was tender while the mushrooms lent a woody flavour to the dish. The cheese sauce was rich yet light, allowing us to finish it with ease. Hidden beneath the chicken, the mashed potatoes were also smooth and had a great mouthfeel. 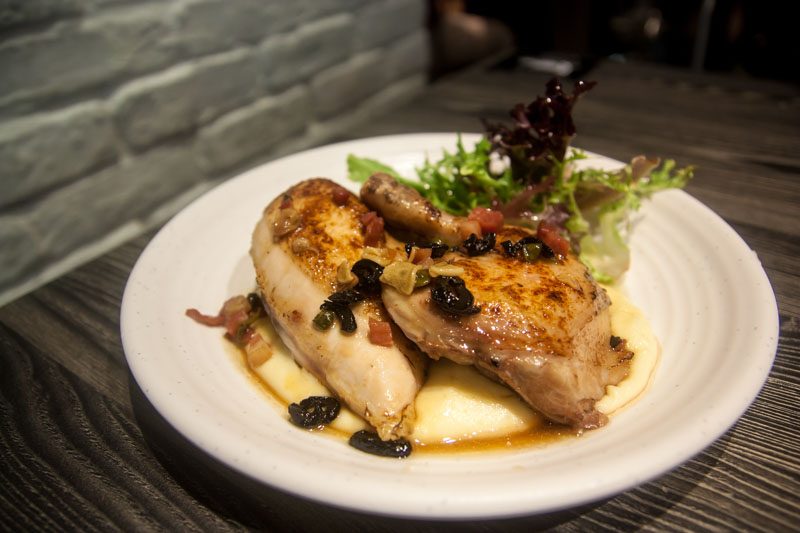 Crowned as the chef’s signature dish, the Half Roasted Spring Chicken ($13.90) came with a whole chicken breast and leg. By the looks of it, we could already tell that it was extremely juicy and well cooked — and we were pleased to find it cooked to perfection.

The dish is finished with a special sauce consisting of bacon, capers, olives and chicken jus, which was seasoned well. The savoury sauce truly made the dish with the hearty chicken flavour accentuating the whole dish. 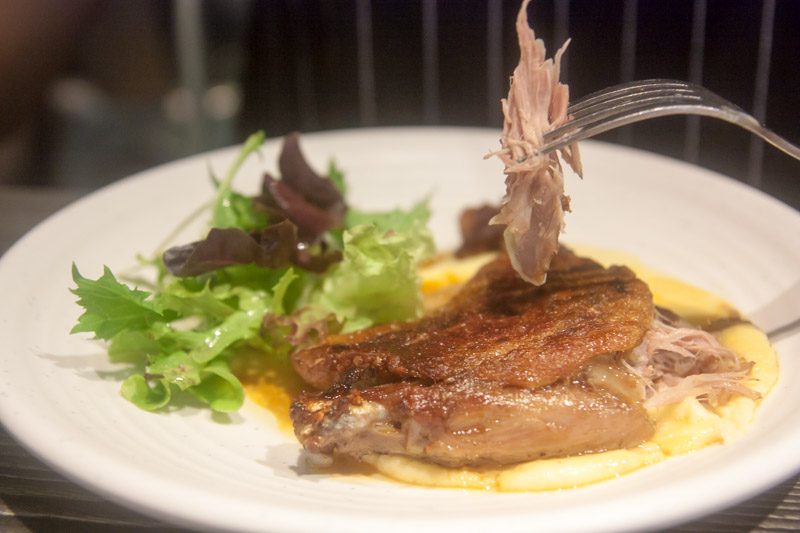 To finish off the dish, we had the Pan Sear Duck Confit ($12.90). Although stated that it comes with Cassoulet Beans, but we had ours with mash, ask what’s the sides when ordering to avoid disappointment. The duck fell apart from the bone with just the use of a fork and flaked apart very easily.

We really liked how the skin was seared after the confit giving rise to a crisp skin in contrast with the soft meat. The sauce was sweet and savoury, a nice contrast to the rich duck leg. For the price, this dish is 100 percent worth it, and we’ll definitely be back here the next time we’re craving for duck confit (and when we’re on a budget).

The stall currently offers two set meals at rather affordable prices, so do check them out!

Forget about forking out more money to pay for food at a fancy French restaurant. Instead, head down to Clifford Centre to get a glimpse of French food without having to swipe your credit card.