What exactly is tau sar piah? With the influx of so many new desserts hailing from all parts of the world, this traditional Teochew pastry may have been pushed to the back of our minds. In times like these, unfortunately, only the best remain

Loong Fatt Tau Sar Piah was the most mentioned shop when I brought up this topic of tau sar piah. Intrigued, I decided to head down to Balestier to check them out. 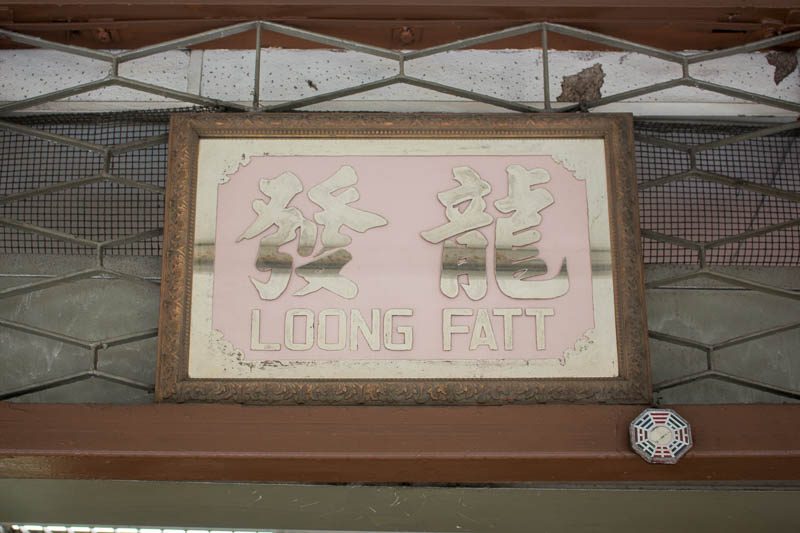 Located at a corner of a long stretch of shops, Loong Fatt Tau Sar Piah is very old-school. There are several tau sar piah stores along the same stretch. But from the queue, you can tell which is the most popular. 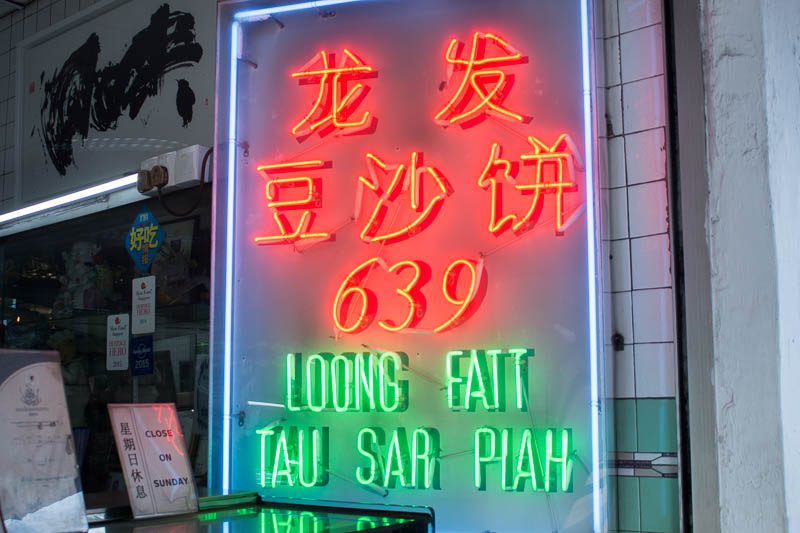 As I stepped in, I felt like I was taken back in time to the ’70s. There is definitely something about the smell of freshly baked pastries and the shop’s nostalgic setting that made the experience heart-warming. I was kindly allowed to enter and watched them as they made their tau sar piah. They worked quickly with their hands, piling two different doughs one atop the other. One is margarine-based whilst the other is water-based. They are then moulded into one, before being flattened by a rolling pin. After they are stretched out, they are rolled back again, now combined into one single dough. 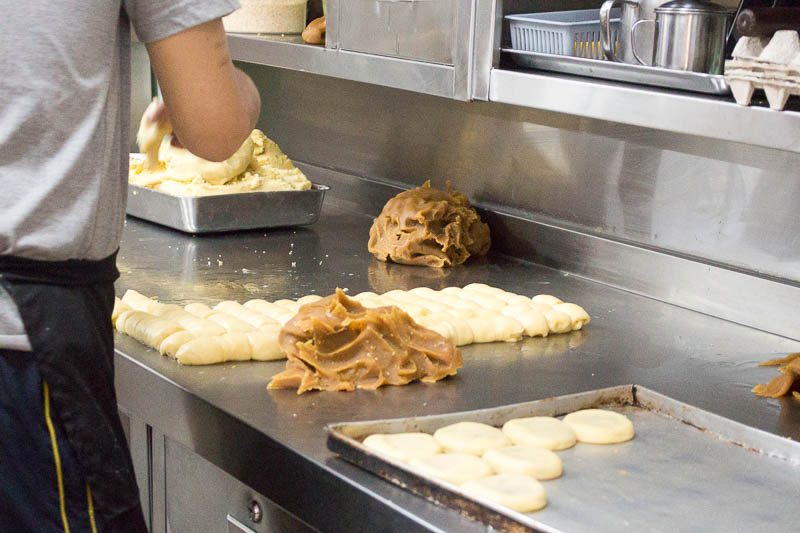 They worked orderly, each specialising in a particular step of the tau sar piah-making process. The rolled-up combined doughs were then brought to another table, where the dough was stuffed with mung bean filling. 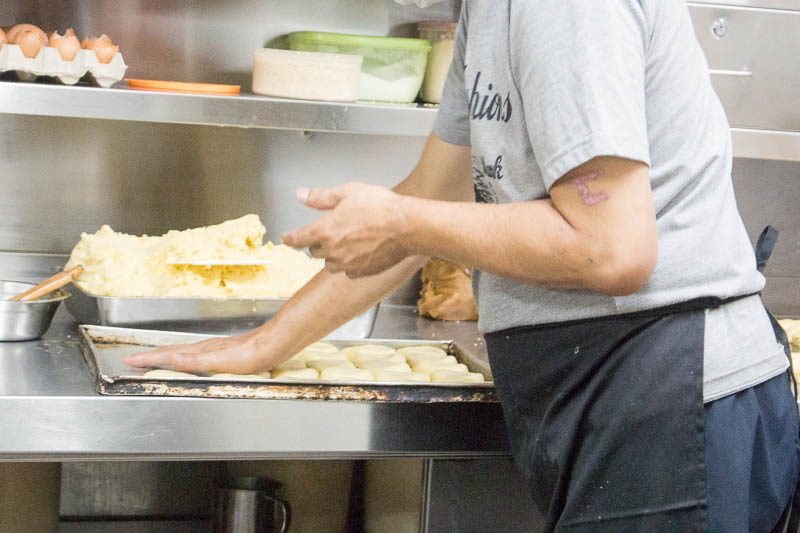 After the doughs are filled and rolled into small balls, they are pressed down with the palm of one’s hand. Now, they are ready to be baked. They are still using the old-school ovens from the 1960s, from which I could spot the fire burning from below it. 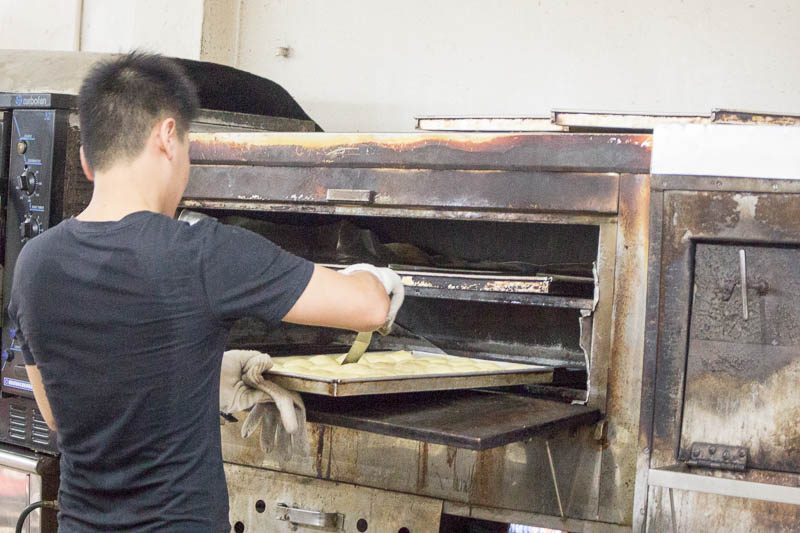 The tau sar piah‘s are monitored very closely, with each one being taken out to be checked and flipped every few minutes. This was done to ensure that the tau sar piah‘s are evenly baked to golden-brown perfection. 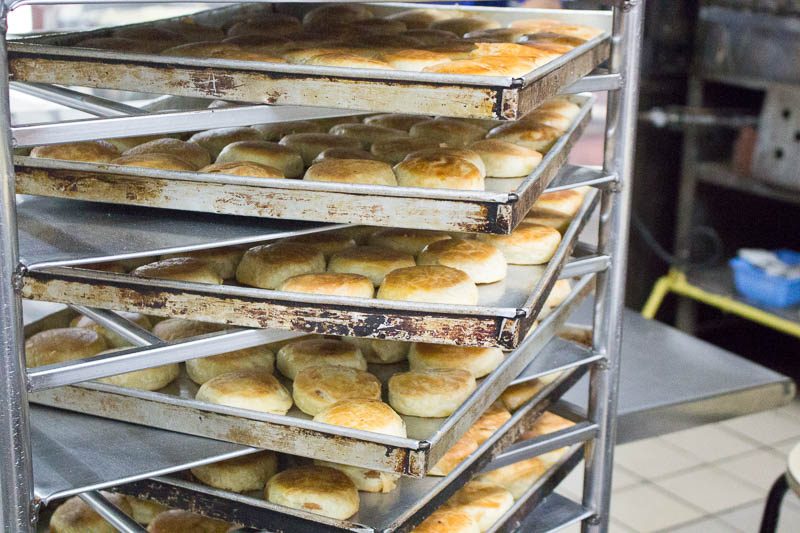 After they are baked, they are then left on cooling racks, waiting to be sold off to the steady stream of customers. 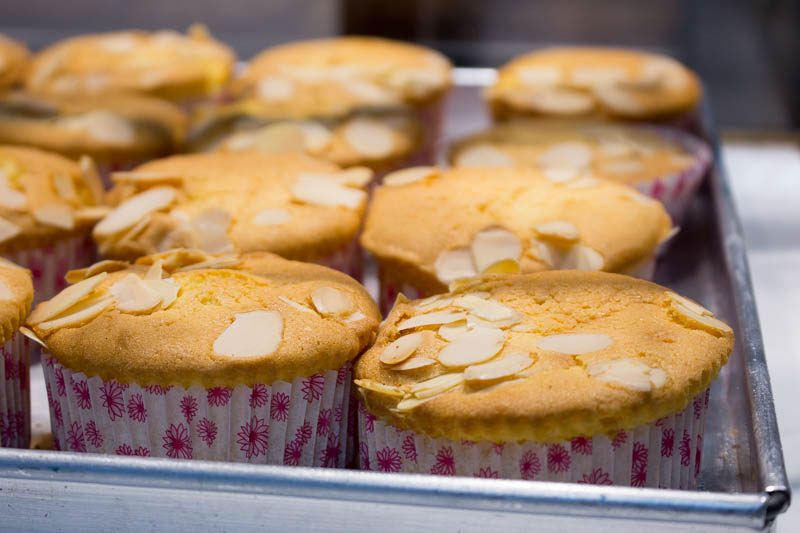 Besides their speciality sweet and salty tau sar piah, they also offer a small variety of old-school baked goods such as chiffon cakes and biscuits. They also sell drinks and mixed rice, so you could say it’s an all-in-one food stop.

I managed to speak to the current owner of Loong Fatt Tau Sar Piah. He is the grandson of the late Mr Lee, who originally founded the business. The late Mr Lee started off with kopi and toast but soon ventured into making these pastries.

Over many trials and errors, he modified the recipe to what it is today — tailored to what Singaporeans love. 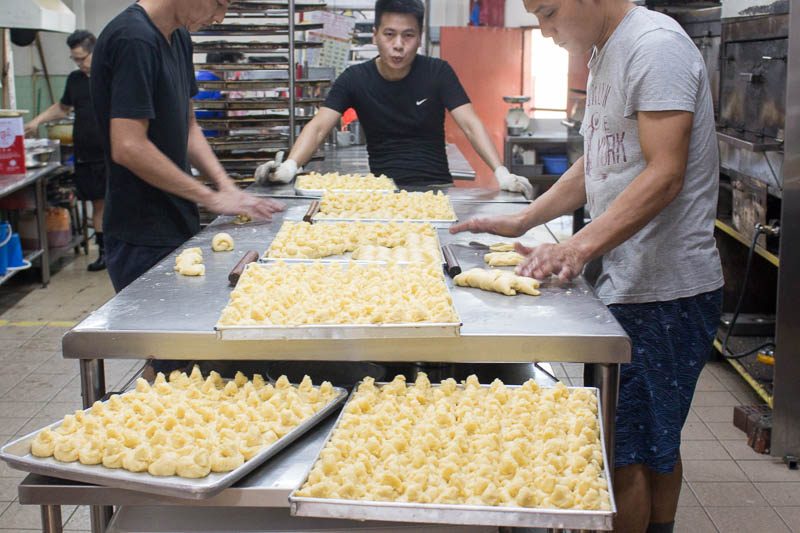 The current Mr Lee started helping out at the stall ever since he was a young kid. He started working full-time at the store after National Service, and never looked back.

Mr Lee shared with me while he has plans in mind to continually improve the tau sar piah‘s and perhaps modernise them in the near future, but he will definitely still stick to the tradition of making old-school treats that people love.

In fact, many of his regular customers have told him that they love how it is right now, with no changes needed. I must admit, there is a rustic and homely vibe to the place that I could get used to. Of course, after all that talking, I had to try them out for myself. I got a box of ten pieces, five sweet and five salty. They are priced extremely affordable at S$0.80 each, to which Mr Lee said they try their best to keep the prices low for everyone to be able to enjoy them. Since the ’70s, they have only upped their prices by S$0.50, which is not an easy feat.

After all, these tau sar piah‘s take quite the effort, especially since everything is done by hand and made fresh daily. Most of the bakers arrive at around 6am to start preparing for the day.

It was also nice to know some of the elderly workers who were first hired by the late Mr Lee are still working there today. 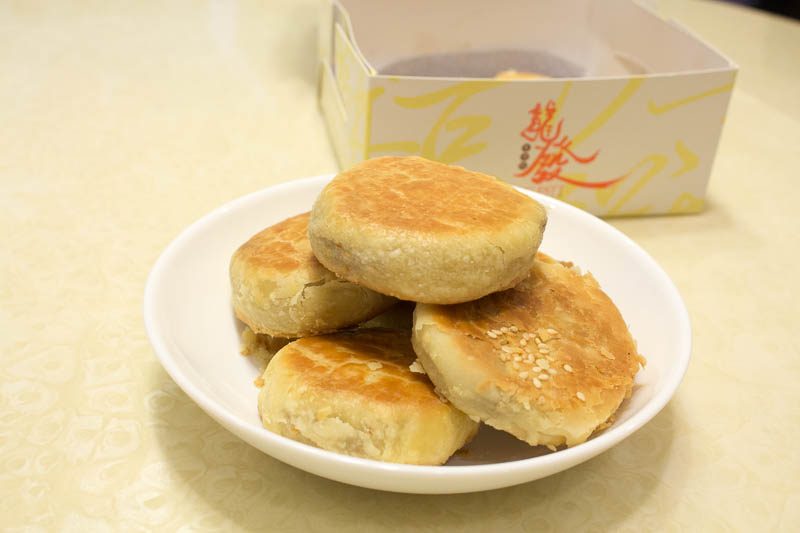 As I opened the box, I caught a whiff of the rich buttery aroma. It was so fragrant my mouth started to water. In addition, I could still feel its warmth through the box, which meant it just came out of the oven. 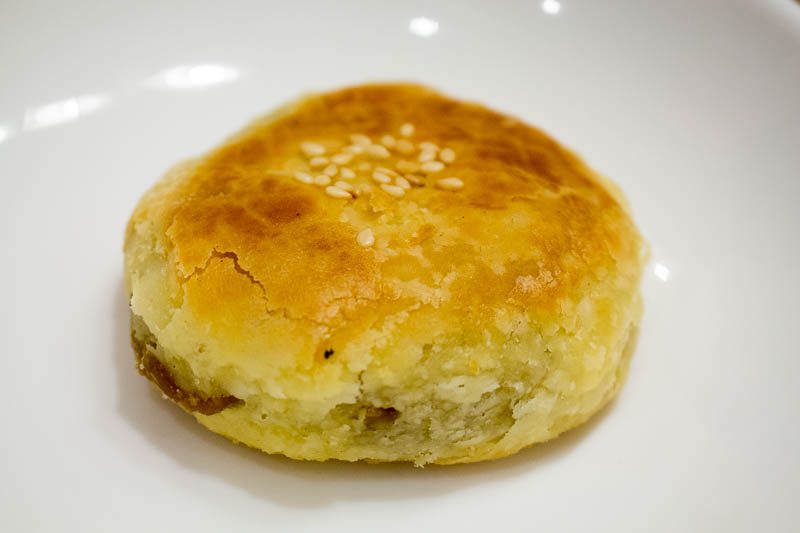 I decided to go for the Sweet Tau Sar Piah (S$0.80 each) first, as I generally prefer sweet treats. As I held it up in my hand, I could feel how flaky it was on the outside, yet relatively firm and hefty in the centre. That signalled to me a generous filling, which was always a good sign. It was also topped with sesame seeds. 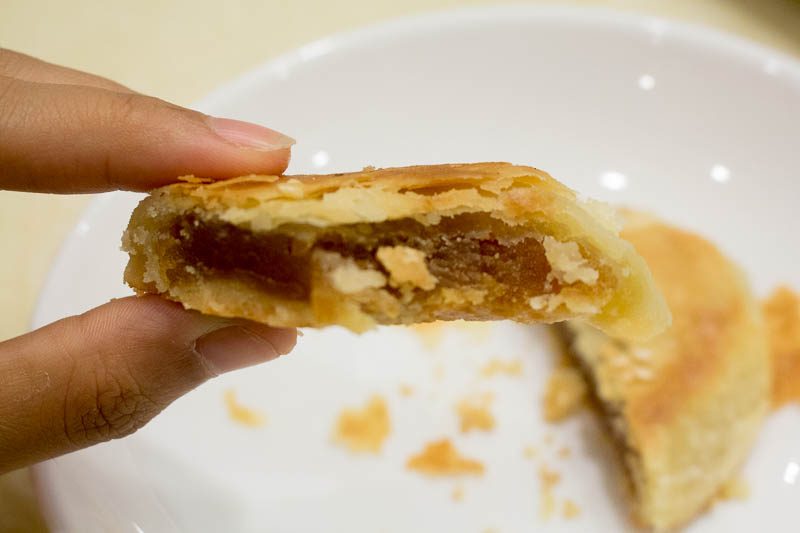 As I bit into it, the luscious iconic butter flavour coated my mouth. I love how that heavy taste juxtaposed its light texture. Fresh and flaky, the skin broke apart easily. I loved how the top was baked to a crisp, for just a slight varying texture which enhanced the mouthfeel of it. 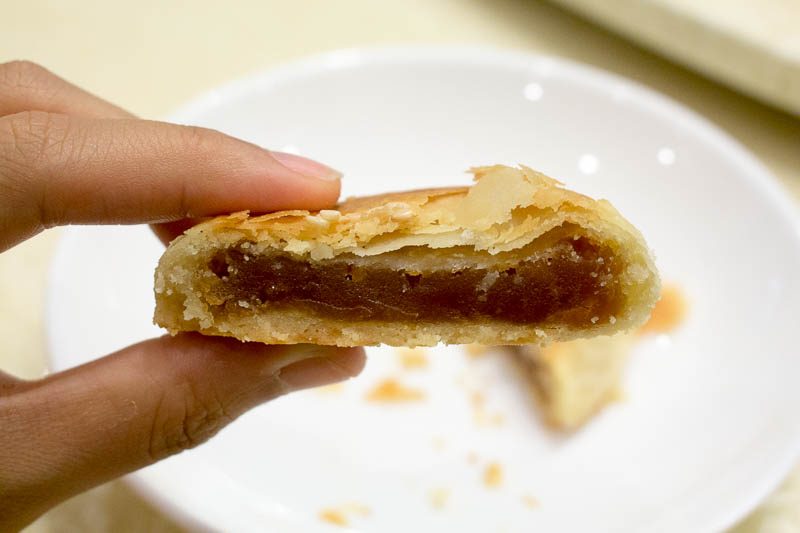 The ratio of skin-to-filling was optimal, with a thick slab of mung bean paste in the middle. They definitely do not scrimp on this, to which I have zero complaints.

The sweet mung bean paste was thick and decadent, which vaguely tasted like lotus paste in my personal opinion. I liked how it wasn’t overly sweet. In fact, it was a perfect contrast of flavours and textures. 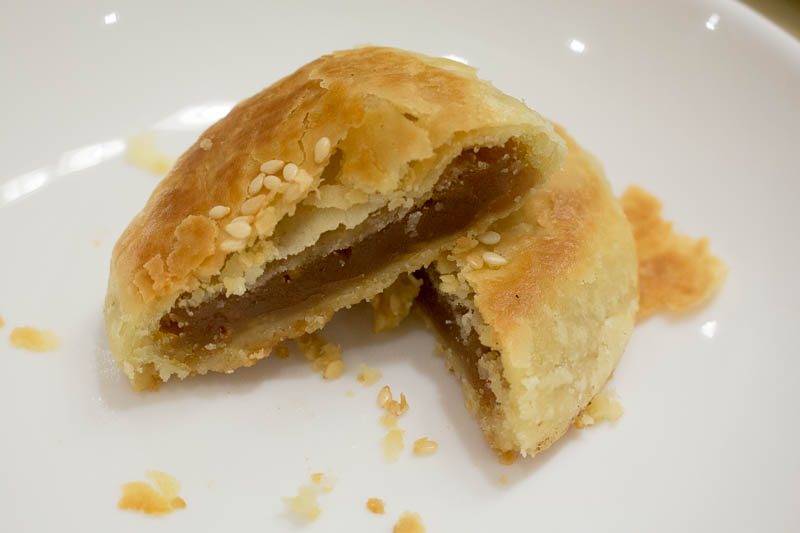 The light and flaky pastry was on the savoury side, with the dense mung bean paste having just the right amount of sweetness. It was a satisfying snack, and I could imagine it pairing perfectly with a cup of coffee. 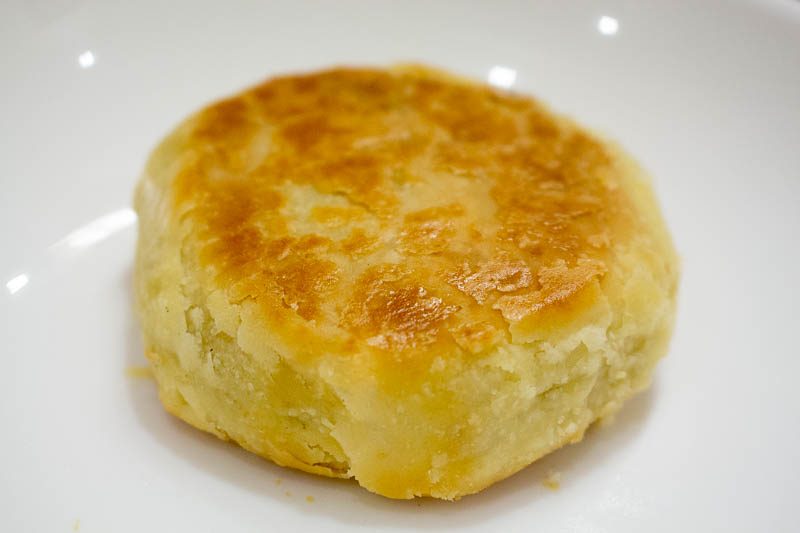 The Salty Tau Sar Piah (S$0.80 each) was equally as good, coming from someone who does not favour salty renditions of snacks. 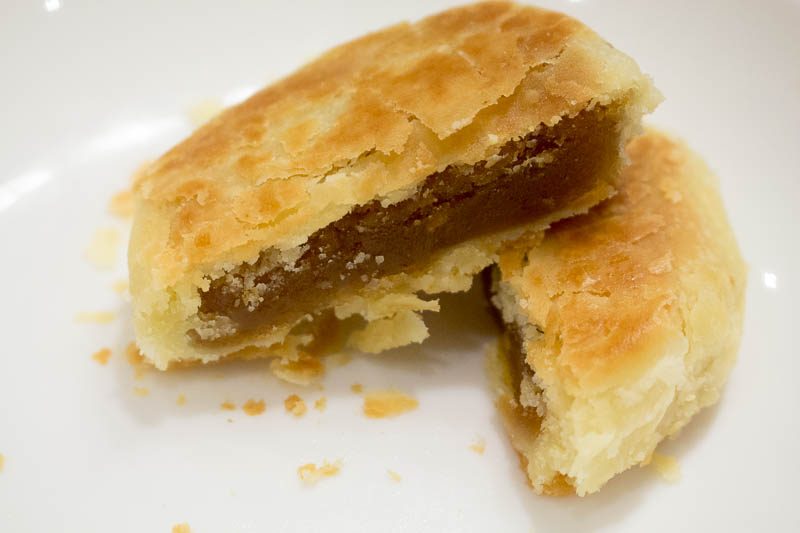 It had the same flaky skin with a perfect golden brown char for a crunch, just without any sesame seeds on the top. However, they did not affect the taste of the tau sar piah‘s. They were just a decorative touch to differentiate the two pastries. 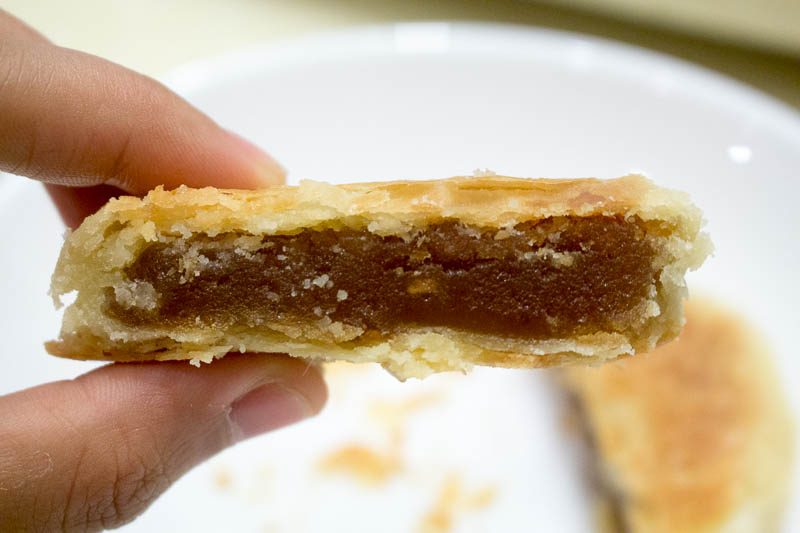 The savoury mung bean was actually delectable. At first taste, I couldn’t tell the difference and thought I ate the sweet one again by accident. I gave it a moment to see if the sweetness lingered, but it didn’t. The mung bean paste was well-seasoned and complemented the pastry skin. It wasn’t a “in-your-face” saltiness, but rather the bit of extra savouriness made it more appetising. For those who do not like sweet things, this would be your better choice.

I brought some home for my family as well and was pleased to say that the pastry skin remained crisp even after several hours. Tau sar piah may not be all the hype nowadays, but they still deserve their due recognition.

Loong Fatt Tau Sar Piah has done an amazing job of producing this old-school pastry and keeping traditions alive. After all, they have been around for over 40 years with a strong loyal customer base; they must be doing it right.

What about you — what’s your favourite old-school pastry?