Well, a new stall to add to your repertoire is Mama’s Boy Bakes. 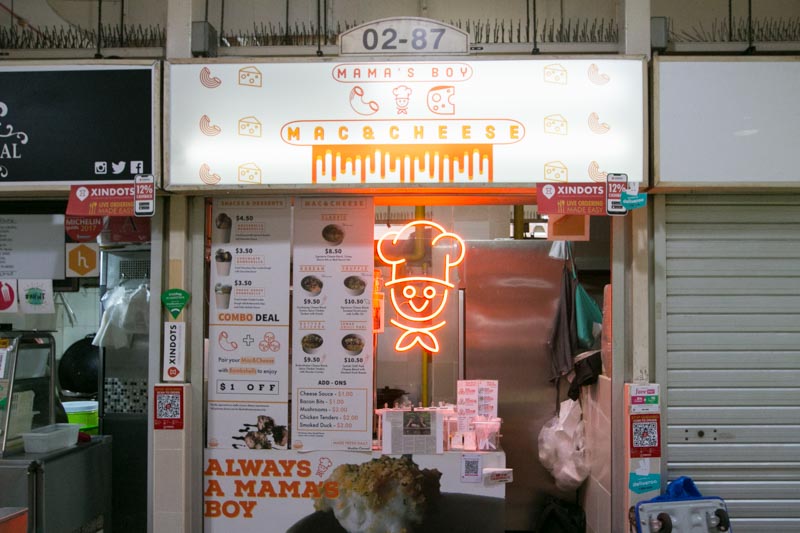 Tucked away on the second floor of Amoy Street Food Centre, Mama’s Boy Bakes specialises in everything mac & cheese. Yup, it does sound a little too good to be true. Samuel and Fahmy helm Mama’s Boy Bakes, two friends who banded, determined to showcase mac & cheese as the star it truly is. They first started as a home-based business churning out delectable bowls of mac & cheese from a home kitchen.

With Mama’s Boy Bakes’ growing popularity, well-angled photos and a little push from social media, Samuel and Fahmy decided to open their first brick-and-mortar store. This way, they could delight even more people with their rendition of mac & cheese. 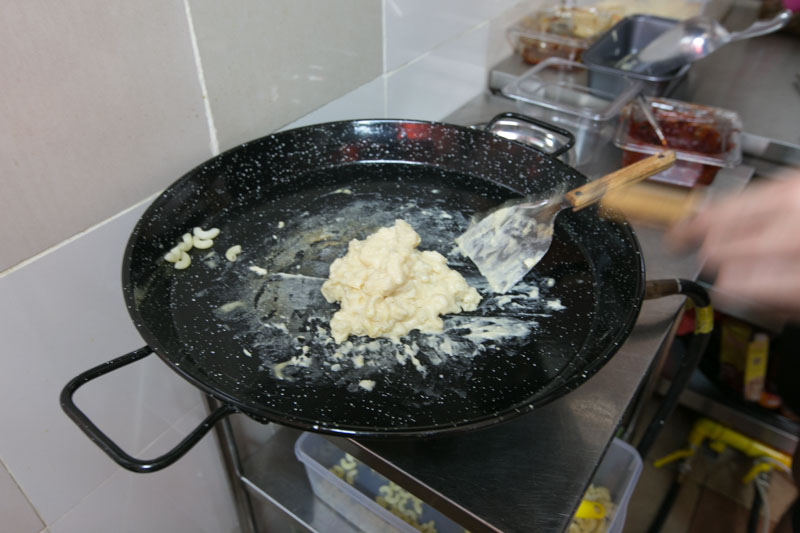 For Samuel and Fahmy, mac & cheese has always been the wildly talented star that only got cast in supporting roles. Not to mention, any other mac & cheese they’re tried have been lacklustre at best. After an extensive amount of R&D, Fahmy and Samuel have come up with a secret combination of high-quality cheeses that is creamy and rich enough to warrant the decadence of mac & cheese but not to point you feel you’re overindulging.

As someone who holds mac & cheese in pretty high regard, I looked forward to seeing how Fahmy and Samuel had reinvented the classic. We began with one of Mama’s Boy Bakes bestsellers, the Truffle Mac & Cheese (S$10.50).  A bed of sautéed mushrooms lay beside a velvety mound of Mama’s Boy Bakes signature mac & cheese. Already, the aromatic truffle oil was wafting up from the bowl beckoning a taste. Their Truffle Mac & Cheese was rich and silky smooth; the elbow pasta cooked a perfect al dente—mushy pasta is a real pet peeve of mine. The crispy and splintery bread crumbs served as an excellent contrast to creamy pasta—a little brownie point there.

While the cook on the mushrooms was satisfactory, they faded more into the background. The strong aroma of the truffle oil was welcome but did little to tie the dish together. It seems no one is immune to K-Wave and Mama’s Boy Bakes are riding that wave to their advantage. Think a side of Korean-fried chicken marinated with gochujang (Korean red chilli paste), a portion of tangy kimchi and a sprinkling Korean seaweed.

Mama’s Boy Bakes Korean Mac & Cheese (S$9.50) has everything in the bowl for you to proudly exclaim DaeBak (slang for ‘awesome’ in Korean)! Just like those addictive Korean fried chicken wings, Mama’s Boy Bakes chicken follows in the same vein with a crunchy and sticky exterior that is both sweet and savoury—it definitely hits the spot. In true Korean fashion, the mac & cheese has several hits of the famous Samyang chilli sauce and gochujang, which delivers that piquant heat that will keep you coming back for more. For spice novices, you needn’t worry as the heat is tempered by the cheese, so it’s pretty manageable.

It’s the perfect bowl to dig into when you are catching up on the latest Korean drama (Signal, anyone?). Perhaps, one of the more interesting bowls that certainly piqued my interest had to be Mama’s Boy Bakes’ Butter Chicken Mac & Cheese (S$9.50). Yes, you read that right; this is a fusion dish like no other.

For this iteration, you get a rich butter chicken cheese blend in your mac & cheese, perfectly fried chicken tenders covered with a dollop of that decadent sauce before finished with muruku crumbs.

As with mac & cheese, butter chicken is a dish that I take seriously. The chicken has to be tender and best cooked in a tandoor (traditional clay oven) for that smokiness and smothered in a mild but creamy tomato and onion based sauce. It’s the ultimate comfort food for me. 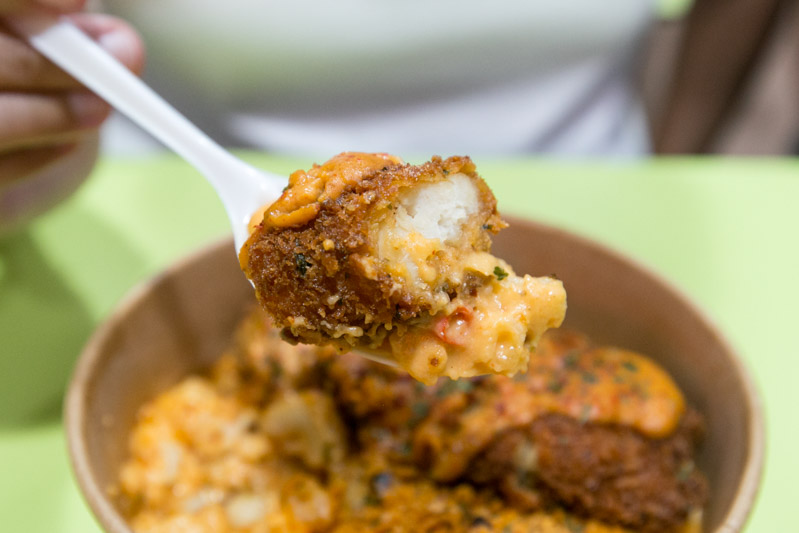 Just like the chicken tenders in their Korean Mac & Cheese, this one was well-breaded, crispy and slightly spicy.

However, the most impressive part of the bowl has to be that butter chicken sauce; buttery, robust and velvety smooth. The flavours in the sauce were well-developed and not muddled with the addition of any ghee or tomatoes.

It’s clear that Samuel and Fahmy understood what goes into a great butter and have faithfully incorporated it into their mac & cheese. I could have licked the bowl clean if I could. 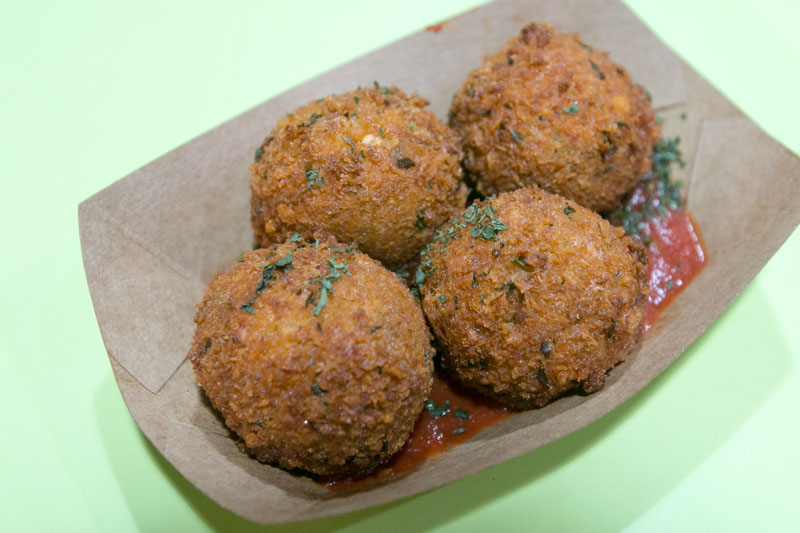 For something truly indulgent, the Mozzarella Bombshells (S$4.50) are an excellent companion to the mac & cheese. These babies are filled with a scrumptious mixture of gooey mozzarella and spinach. 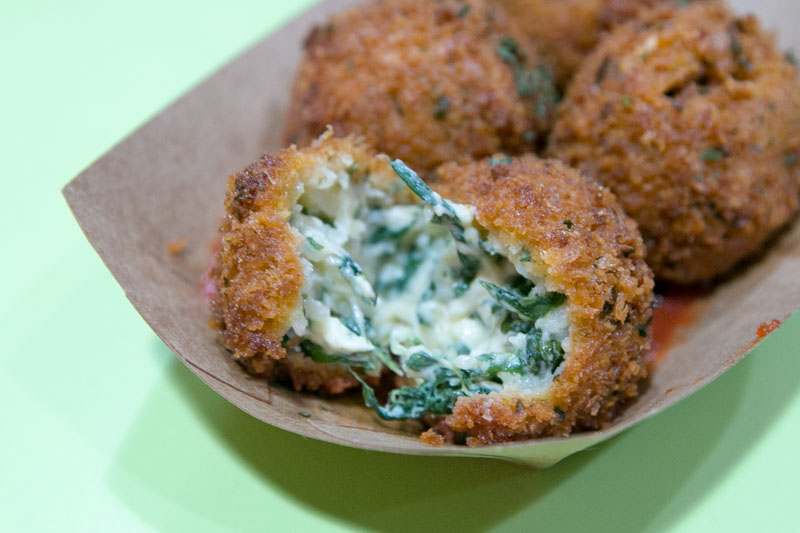 A real crowd-pleaser, these bombshells are everything you’d want them to be. With a soft cheesy centre and a gloriously coated crispy exterior coupled with a tangy marinara sauce to boot, this is the ultimate treat.

Of course, as with any deep-fried goods, they do tend to get a little cloying if you eat them too quickly. To avoid that nasty heartburn, I would suggest eating slowly to truly savour them. For a bonafide dessert girl like myself, you know I have to talk about Mama’s Boy Bakes’ Ondeh-Ondeh Bombshells (S$3.50). Just as the name suggests, these are fried ondeh-ondeh balls which are drizzled with a caramelly gula melaka.

The fact that they were deep-fried added extra texture to this well-loved dessert. Fragrant and sweet, peppered with sticky butterscotch chips, I was definitely on board with this take of ondeh-ondeh.

I’m not the only one; Samuel and Fahmy tell me that many older uncles and aunties love having a serving of their Ondeh-Ondeh Bombshells with their afternoon coffee.

They say ‘if it ain’t broken, don’t fix it’ and I wholeheartedly agree with this notion, unless you know a way to make it better. Which is precisely what Mama’s Boy Bakes has done, as they’ve taken an often overlooked side dish and not only made it better, but even added their twist, and it works!

What’s more, by having a stall in Amoy Food Street Centre, Samuel and Fahmy have made mac & cheese all the more accessible. Trust me when I say after you’ve Mama’s Boy Bakes, you’ll never want Kraft mac & cheese again. 8 Stalls You Have To Visit At The International Food Fair...