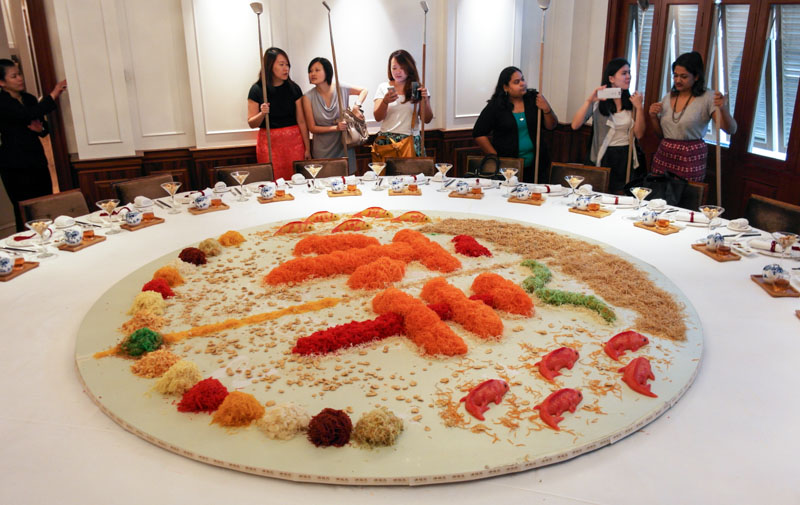 Man Fu Yuan is the ritzy Cantonese restaurant that occupies much of Level 2 of Intercontinental Hotel. In line with Chinese New Year 2015, the restaurant is introducing a refurbished spread of coveted dishes in its woody palatial interior enriched by ornate carved window screens and wainscoting. 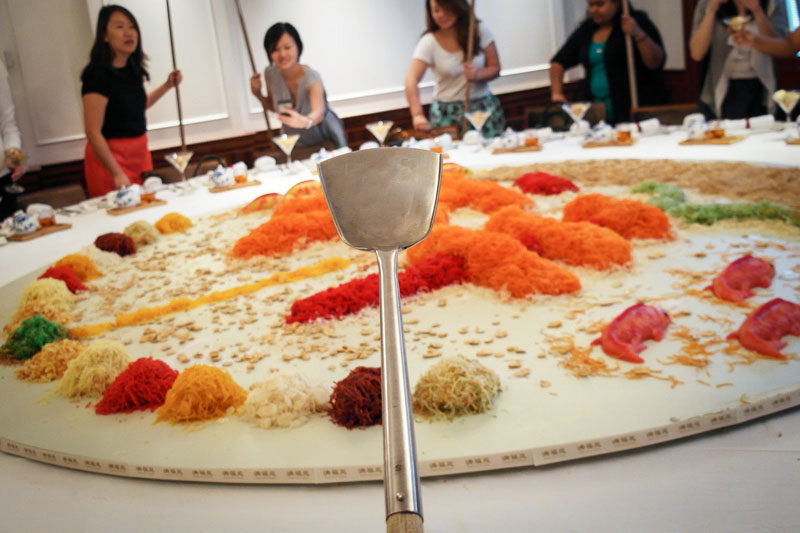 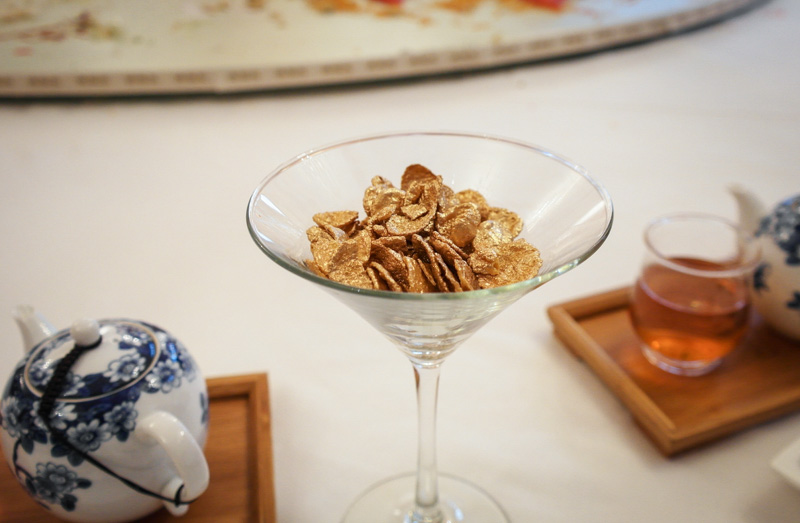 I was cordially invited into Man Fu Yuan’s warm sanctuary to be a part of its maiden unveiling of the prestigious Chinese New Year menu 2015. Today we’ll be trying a variety of dishes made available during CNY.

In the middle of the private room that held the media entourage lay a gargantuan mishmash of shredded vegetables and 6 slimy whole-bodied pieces of red fish; this was the largest Yusheng I’d ever seen—a Prosperity Toss fit only for giants. 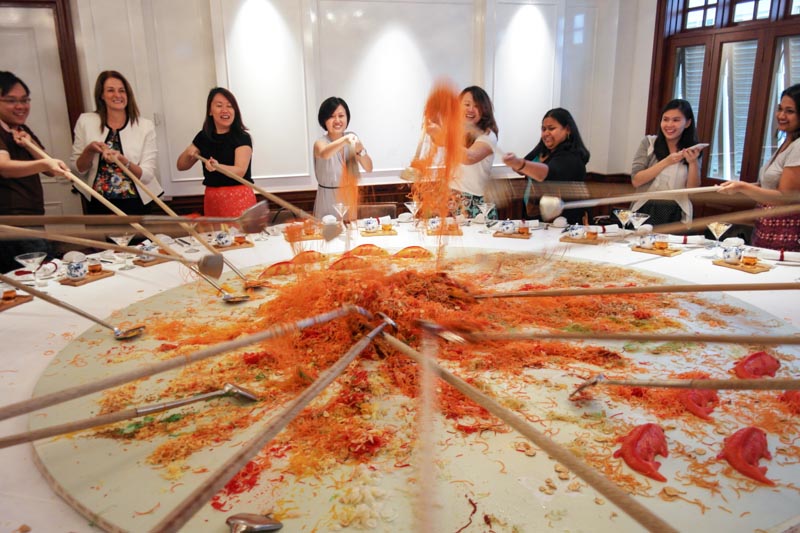 After facetiously tossing the multi-coloured vegetables about with our endowed dining spades, we learned from the head chef that this plowing exercise was a mere gimmick for the media in attendance. I don’t know why Man Fu Yuan chose to shatter my otherworldly dream of eating from the mound we took 3 minutes to loosen, but before my disappointment at failing to serve myself a yeti-sized plate of Yusheng set in, the actual edible portion was placed in front of me: 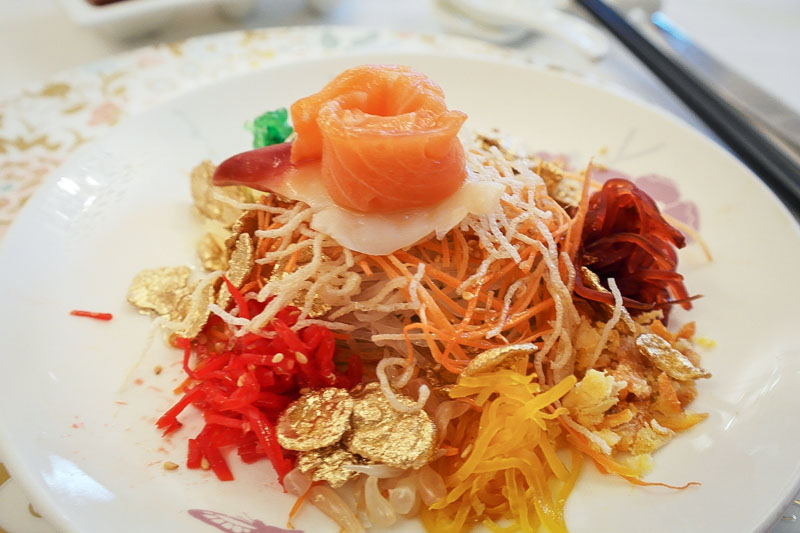 Man Fu Yuan’s Salmon & Japanese Hokkigai Yu Sheng with Ponzu Shoyu. Cornflakes in gold are sprinkled over the plate of infinite fortune, which does not usually vary in taste from the routine set of vegetables. But with this shoyu dressing over the usually dry Yusheng for a flavour closer to soba as well as delicate raw salmon and Hokkigai clam, Japanese cuisine fans could most likely use an extra serving. Double-boiled “Fu Zhou” Buddha Jumps over the Wall. This would be our first of many abalones for the day, all of which are internationally procured. A trifle viscous consomme harbours 2 kinds of fish maw, abalone, quail egg, black chicken, and deer tendon, the special ingredient, in this scrumptious soup. I enjoyed every savoury bit of this collagen-fish-maw marriage that is served piping hot and an invigoration of the senses. 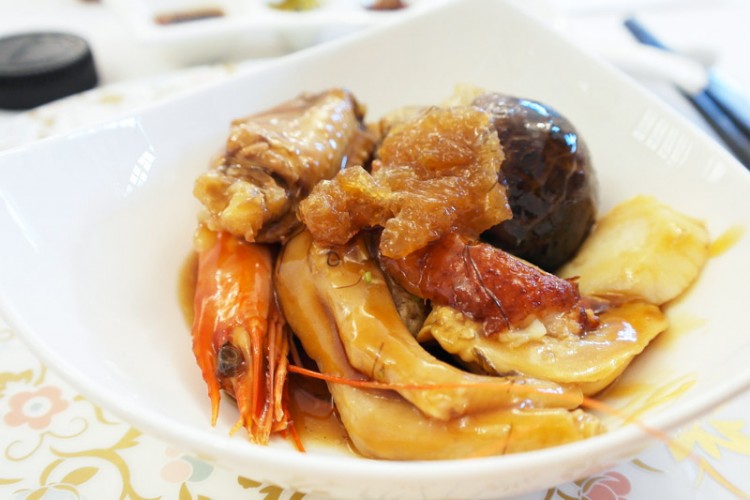 Man Fu Yuan’s Deluxe Treasures Pot.  Within the deluxe pot are the likes of deboned dace fish (mine had just a morsel of bone) made into a roulade, duck feet, mushroom, and duck all entwined in mushy seaweed. The thick stock that typically accompanies abalone barely fills the small plate, but it aptly blends with the slimy offerings of this potentially messy dish. Above all, if not for a focus-absent case of having too many cooks, every component is delicious and well-cooked. 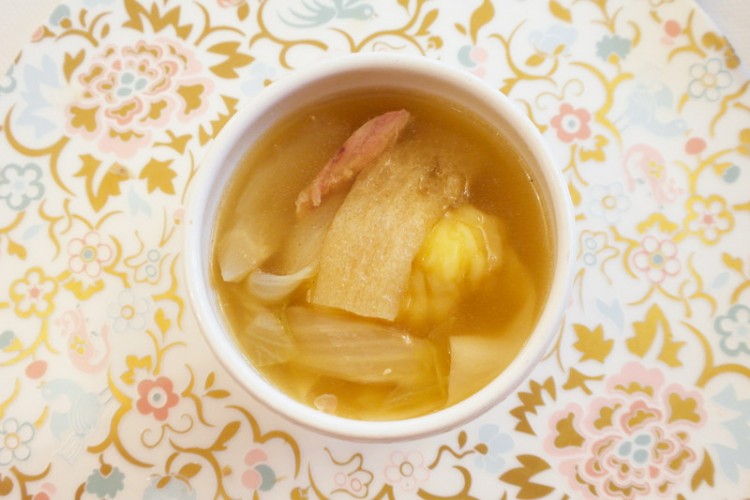 Double-boiled Fish Maw, Bamboo Shoot, Chinese Cabbage with Dumpling in Superior Stock. As if we were tireless soup drinkers, another bowl tending to a less “heaty” stock arrived to supposedly neutralize the palate for the more intensive road ahead. The fish maw essence was still very prevalent and made only lighter with cleansing cabbage. What I particularly relished was the shrimp dumpling of a silky smooth skin and delectable filling. 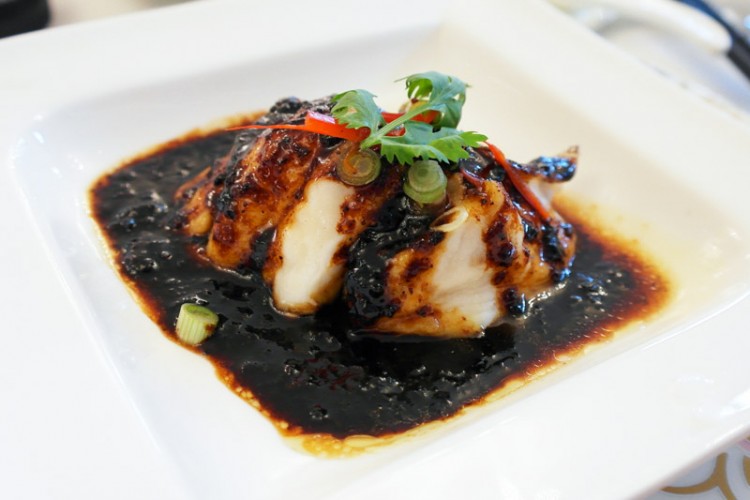 Steamed Red Garoupa in Homemade Black Bean Sauce. The natural bounce to the snow-white flesh of the garoupa is splendid in this post-appetizer opener. Black bean sauce regularly goes with steamed fish for a piquant contrast that meshes nicely with rice. 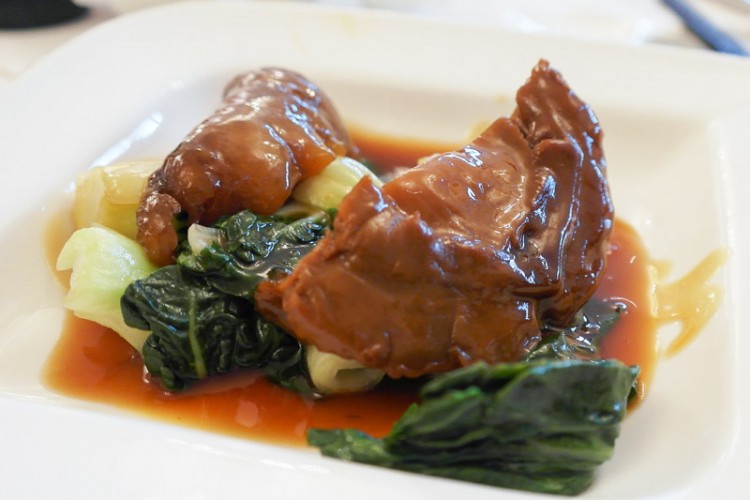 Braised Australian Green Lip Abalone and Chinese Mushroom with Seasonal Vegetables. To my surprise, the green lip abalone had a juice-emitting toughness much unlike the other abalones of the day. Aside from this anomaly, the sea cucumber and vegetables drenched in the abalone stock were enjoyable, but also commonplace in Chinese restaurants. 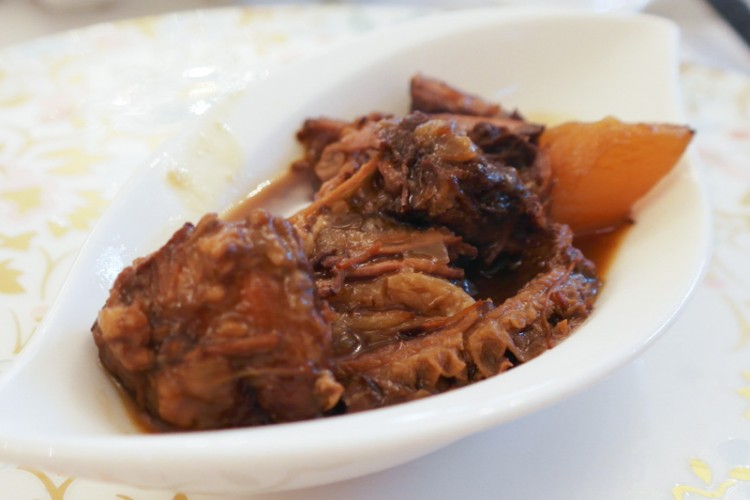 Braised Beef Brisket with Radish. Highly soft radish is served alongside tender beef brisket in a rich dark stew rife with homely notes. I did not consider it a standout, but believe it can be a good rice partner with its heavy flavours. 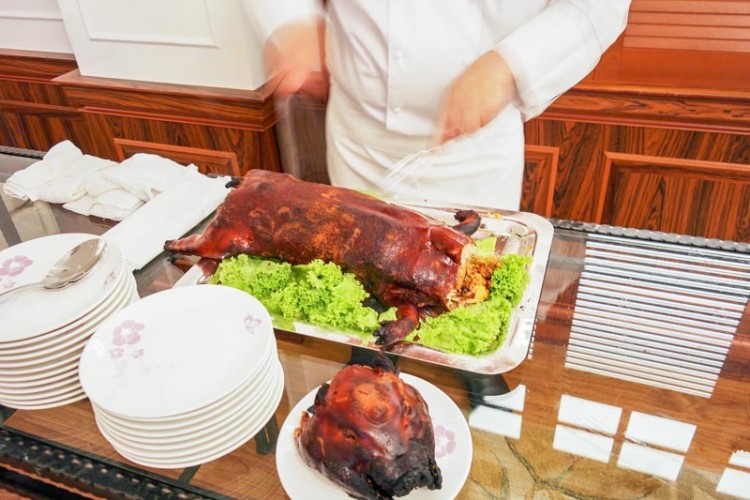 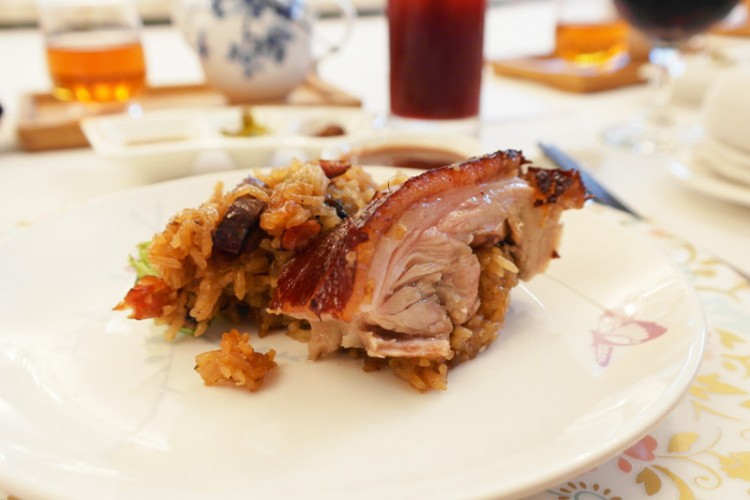 Barbecued Whole Suckling Pig with Wok-fried Glutinous Rice. There was almost an excited outburst among us guests when the chefs very proudly presented the full-bodied suckling pig then began to divide it up into plates, revealing a fragrant glutinous rice stuffing that was masterfully prepared for a crisp exterior. For certain, though, the pig was the day’s highlight. Not only is the tender flesh loaded with tasty fat, but its crisp charred skin that crumbles to release a delicious oil is of an unreal texture that saw many request for refills. 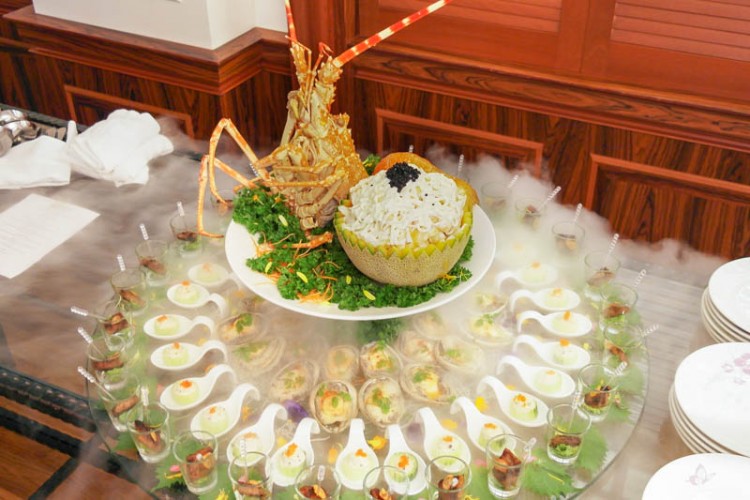 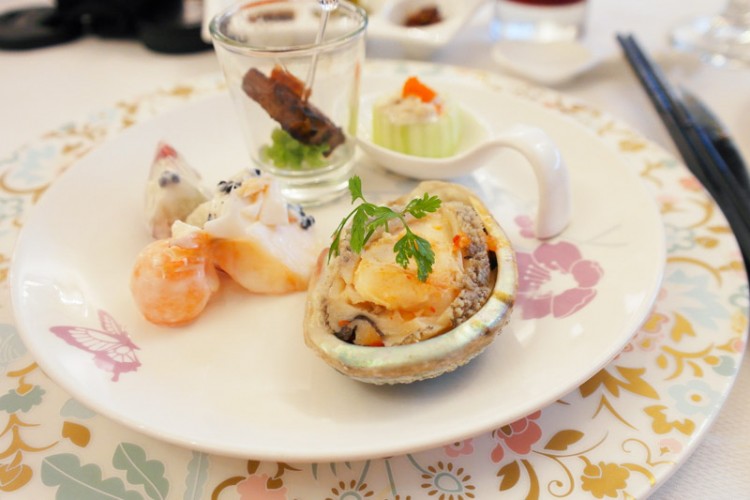 French Lobster Salad in Rock Melon with Sauteed Wagyu Beef, African Abalone and Sake Crab Meat. The cold dish preceding dessert is one bestowing exquisite fresh creamy seafood and a diminutive serving of wagyu beef on a satay stick. A strong hint of beef is evident in the succulent wagyu and that primarily contrasts to the light-bodied abalone slices topped with a sweet and spicy sauce. I know I would have loved it if not for the possible abalone overload on this day.

As for the French lobster and sake crab meat, I especially fancied the sweetness of flesh and Japanese overtone. 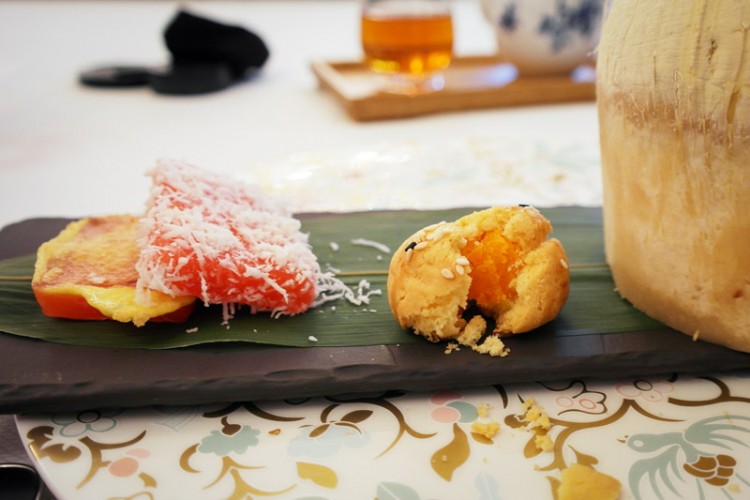 Golden Egg Custard Pastry. Soft filling is unleashed from this “eggy” pastry that is of the expected melt-in-the-mouth standard. 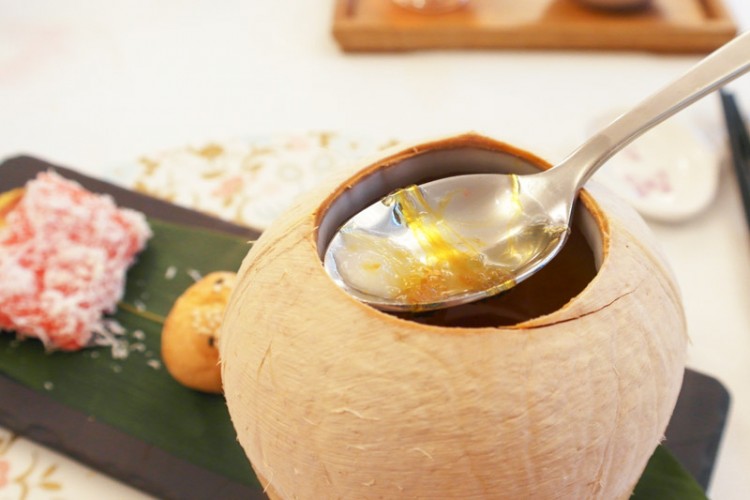 Double-boiled Bird’s Nest in Whole Coconut. It is clear from the chef’s expression how much this is revered as a dessert, particularly at Man Fu Yuan. Though the spoon might be a tad big for the coconut opening, it sure aids in quickly scalping the coconut flesh. I found the boiling sweetness within that holds elegant bird’s nest to be remarkable. A little part of me did hope there was a cold version of this delight.

Each time you dine at Man Fu Yuan, brace yourself for regal treatment. Those in pursuit of a grand reunion dinner can earnestly consider devoting some quality attention to tradition in this Cantonese restaurant.