I think the only time I ever find myself at the Esplanade is when I’m watching a performance. This time, however, I made a special trip for a different type of appreciation — food. 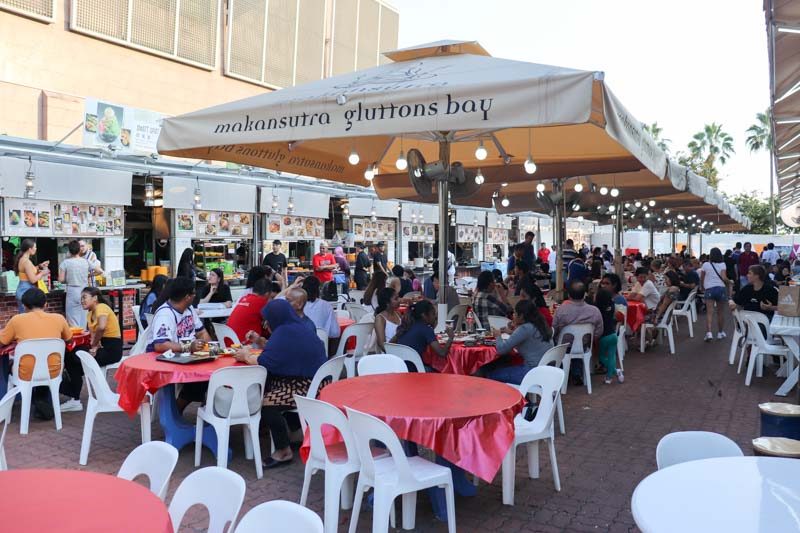 In late-November 2018, Meatsmith Western BBQ opened its doors to the public. But it’s not just any ordinary Western stall serving flame-grilled meats with a side of fries and salad. Helmed by David Pynt, Chef of Michelin-starred restaurant Burnt Ends, the Western eatery quickly became the one to watch. I got to the tourist hotspot early evening, hoping I could beat the prime dinner hour.

The sun was blazing with intense heat just that afternoon, yet Makansutra Gluttons Bay did an excellent job of keeping the place cool and breezy with their fans and outdoor patio umbrellas. 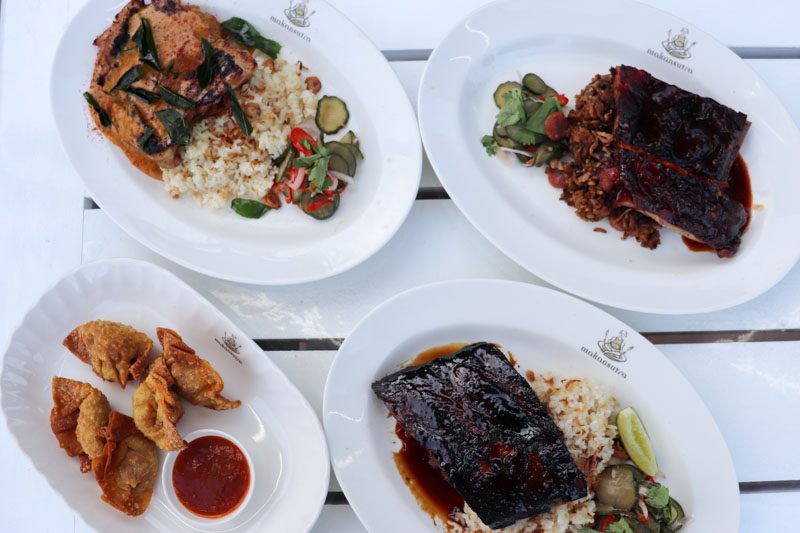 My dining companion and I spoiled ourselves with a selection of each grilled meat Meathsmith Western BBQ boasted and left with a tray full of barbecued delights. We also got a fried snack to nibble on because more is always better.

The smell of the sweet roasts overwhelmed us but we paced ourselves and started by relishing the fried dumplings. The Pulled Pork Wontons (S$5) were piping hot as they were served and came with a side of sweet and sour sauce.

The stuffed gems were deep-fried to perfect golden brown and its crispy skin had us drooling before we even tasted it. As I munched into the dumpling, I was pleased to have been greeted with a loud crunch that followed. The vibrant sauce was nothing to shout about although it did complement the snack well.

The pulled pork filling was tender and savoury, with a hint of smokiness that I suspect was a result of the meticulous grilling method. This was definitely one of the more elevated wonton snacks I have eaten and I’d gladly return for more. 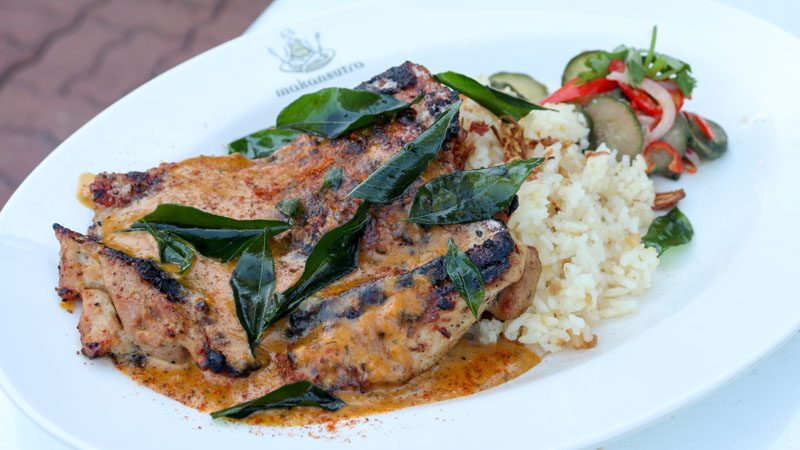 I was most excited to try the Salted Egg Chicken Chop (S$9) because of the recent frenzy over salted egg anything. It was fierce competition and I wanted to see how this version fared.

The grilled chicken thigh was blanketed with a generous portion of salted egg yolk sauce and curry leaves, served alongside garlic rice and garden greens. The chicken chop was decently chargrilled and its skin maintained a crisp exterior, without being burnt. The meat was juicy and tender but what stood out like a diamond was rich and creamy salted egg yolk sauce.

The indulgent dressing had a punchy touch of heat from the chilli and paired beautifully with the fragrant curry leaves like bread and butter. It was so good. Unlike the standard Western side of French fries, Meatsmith Western BBQ swapped it with some fragrant garlic rice. It was a pretty delectable pairing but nothing too special. 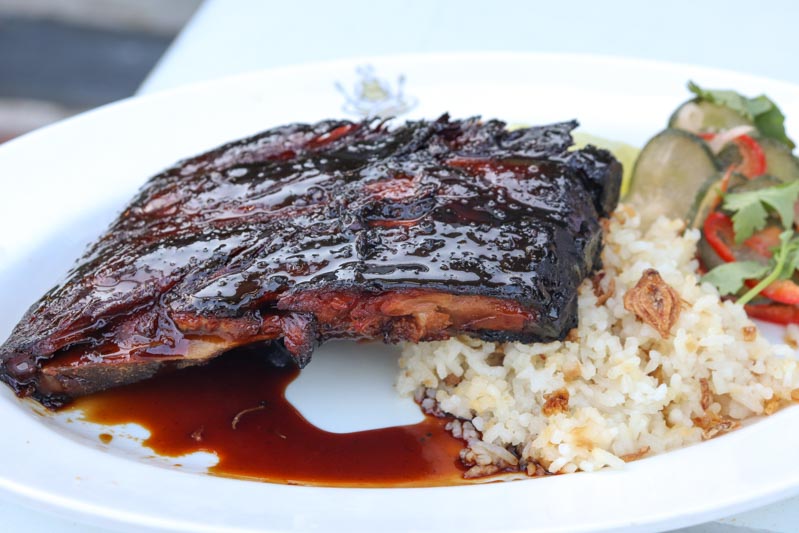 By hearsay, we were told that the crowd favourite Smoked Char Siew Pork Ribs With Garlic Rice (S$10) bragged a gastronomical experience.

The rack of ribs was drenched in a sweet honey barbecue sauce and had a nice charred exterior. It was exactly the kind of dish that would leave you drooling after luring you in with its aromatic charms. 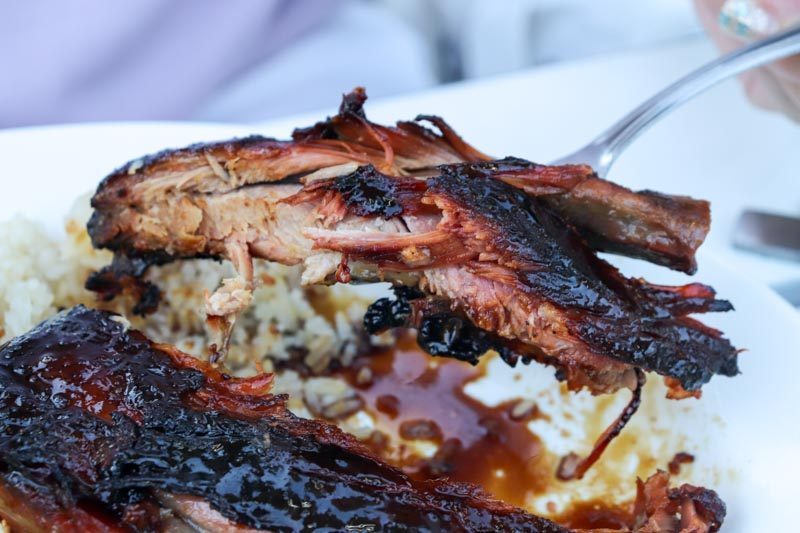 As cliche as it sounds, the meat was delicate and tender and fell off the bone effortlessly. However, the honey barbecue glaze became cloying with every bite, leaving us slightly overwhelmed to continue our meat fest.

On one hand, Meatsmith Western BBQ truly nailed it on the head when it came to attaining that impeccable balance between tender and tough ribs.

On the other hand, the sauce could maybe tone down on the honey as we found it too sweet for our liking. Nonetheless, it’s still up to everyone’s personal preference. 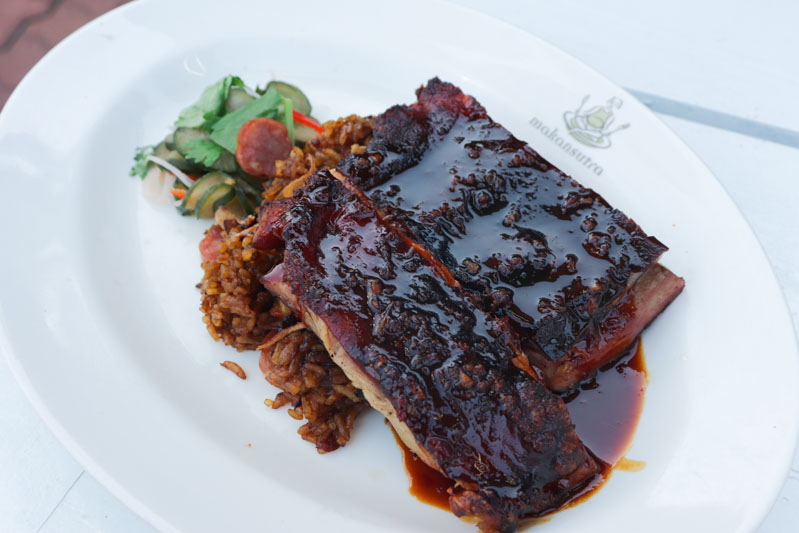 Finally, we tried the Smoked Suckling Pig With Glutinous Rice And XO Sauce (S$16). This was the final dish of the three mains Meatsmith Western BBQ had on their menu and also priced the highest.

On the surface, the skin glistened with the pour of XO sauce and looked like it had a great crackle. Yet, we found it a tad too hard as we found ourselves gnawing through it. 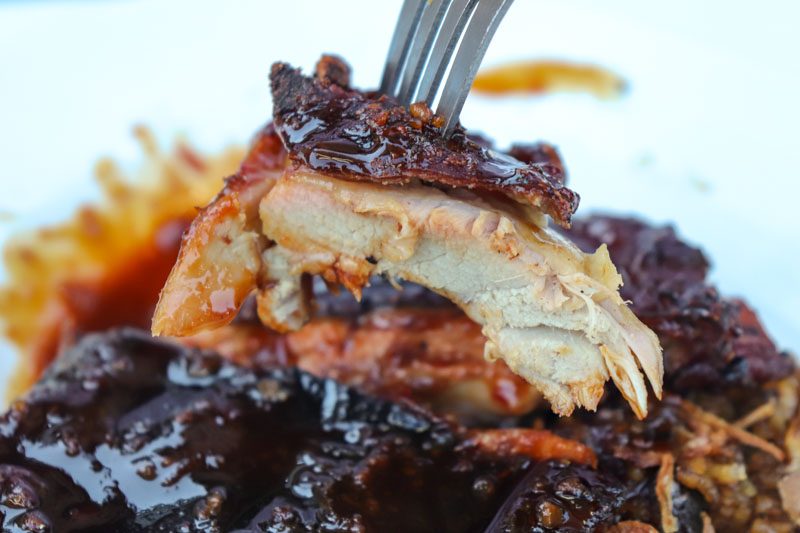 The pork was a polar opposite of what we tasted previously with the ribs, it was tough and required quite a bit of jaw work.

I thought the glutinous rice side was an odd combination with the sticky XO sauce and hesitantly gave it a try. It was tasty on its own and had traditional ingredients like sliced Chinese mushrooms, Chinese sausage and fried shallots. Yet as expected, the heavy carb didn’t quite match the spicy shrimp XO sauce.

Perhaps our palates were off after revelling in the sweet ribs sauce, but the sweetness of the XO dressing with the sticky glutinous rice and suckling pig was just all too overwhelming. These were three premium items that deserved a dish on its own, and mixing them together on the same plate didn’t work for me.

Now, don’t go expecting Michelin star quality food here at Meatsmith Western BBQ. Though it served a satisfying set of grilled meats at an affordable price, it just didn’t quite match up to our expectation on consistency, but maybe the chefs weren’t in the groove that day.

I’m sure its tourist locale will see many stopping by and if you’re ever in the area, Meatsmith Western BBQ might just satisfy.