I must admit, Japanese cuisine is my favourite of them all. There was a time in my youth where I had to have it at least once a week. Today, as hard as it is to believe, I regard it as a treat. Along with changing eating habits, I’ve discovered the irresistible appeal of omakase. And what perfect timing, as I’ve discovered a new Japanese joint, minka, near Tanjong Pagar.

What really drew me in was their Early Bird Omakase for S$38 that’s exclusively available for their 6pm weekday dinner seating.

I suppose you’d have to come up with an excuse to leave work early to enjoy this steal. But hey, for the impeccable food that you’ll be served, it’ll be worth slinking out the door before time’s up. 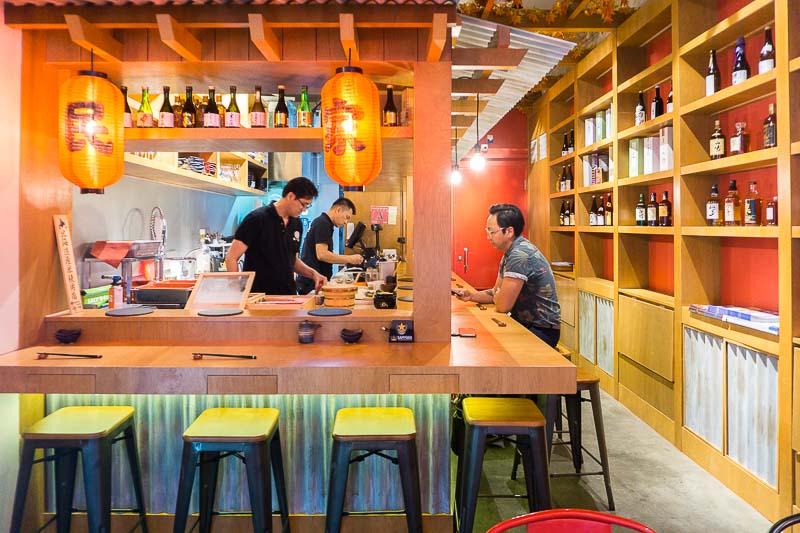 The place is incredibly cosy, with seats that mainly encircle the counter. Apart from the S$38 set, they also have higher denominations (all for dinner only) of S$68 (Omakase), S$98 (Premium Omakase) and a Chef’s Omakase at S$148.

The Early Bird Omakase is a 12-course offering, made up of two appetisers, a vegetable, six sushi dishes, a sashimi rice bowl, soup of the day and a dessert. 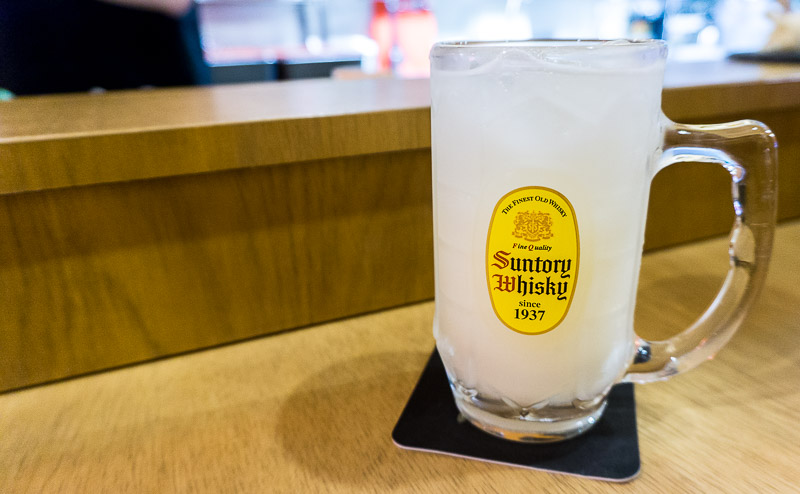 To kick the evening off, try either their Yuzu Highball or Calpis Highball ($10 each), which wasn’t only refreshing, but a great citrusy cleanser for the palate. 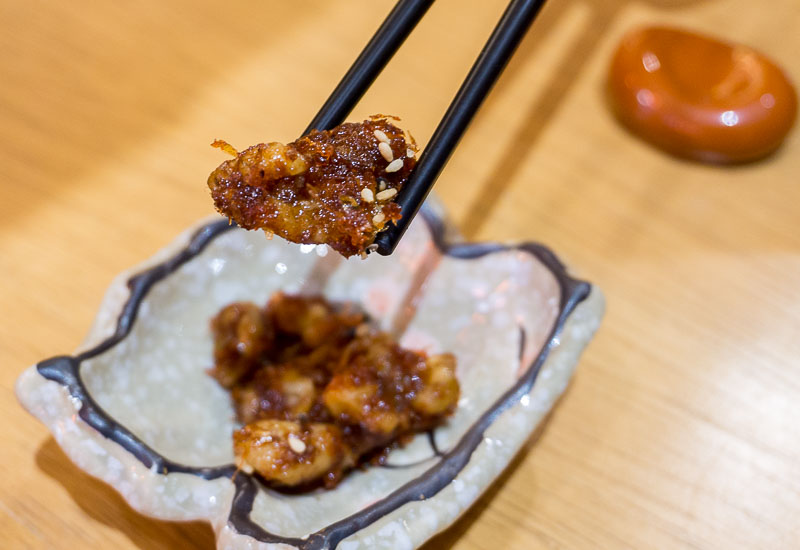 What arrived first was a tiny bowl of Walnut With Bonito, a combination I’ve never heard of before. The bonito-coated walnuts were at first confusing, but also satisfyingly savoury.

It was saltier that I would’ve expected, but the rich nuttiness really shone and quickly became a likeable appetiser. 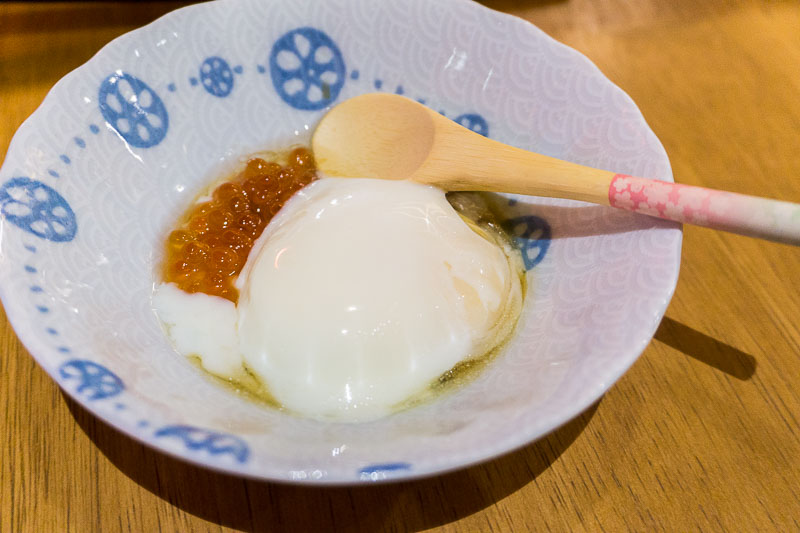 The Onsen Egg With Ikura wasn’t the prettiest belle at the ball, but it hit all the right notes with its truffle shoyu base. 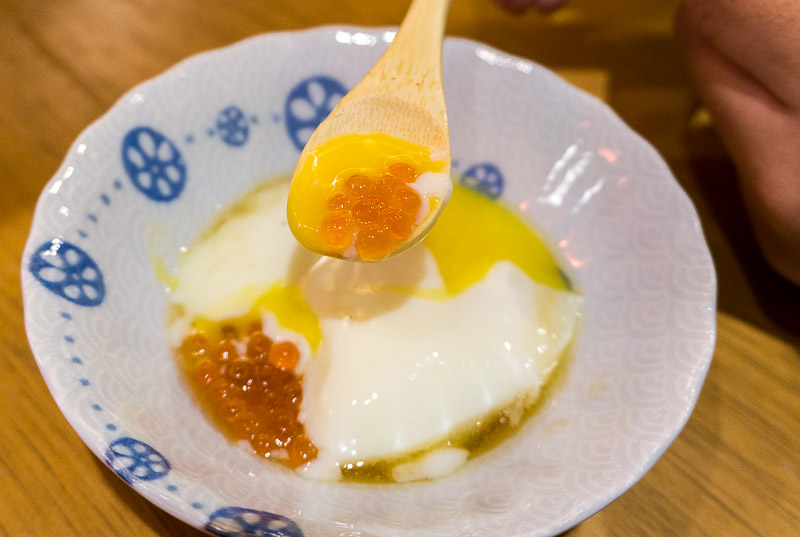 The aromatic truffle was intoxicating, as the unmistakeable saltiness of the ikura pulled the dish together to make it utterly divine. It was a mix of creamy and salty with even a pinch of sweetness that made this dish one of my favourite of the evening. 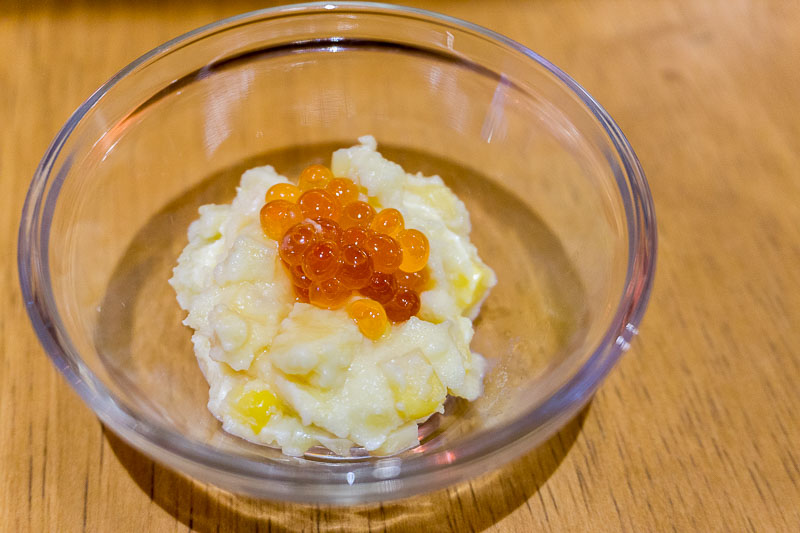 I’ve never seen anything like this, but the Corn And Potato With Ikura was a surprising combination that really worked. What made the union legitimate was the presence of ikura, which contributed to its saltiness and slippery texture. I know ‘mushy’ isn’t an appealing manner of describing food, but this literal mishmash of textures really worked in this dish’s favour and created a winning combination. 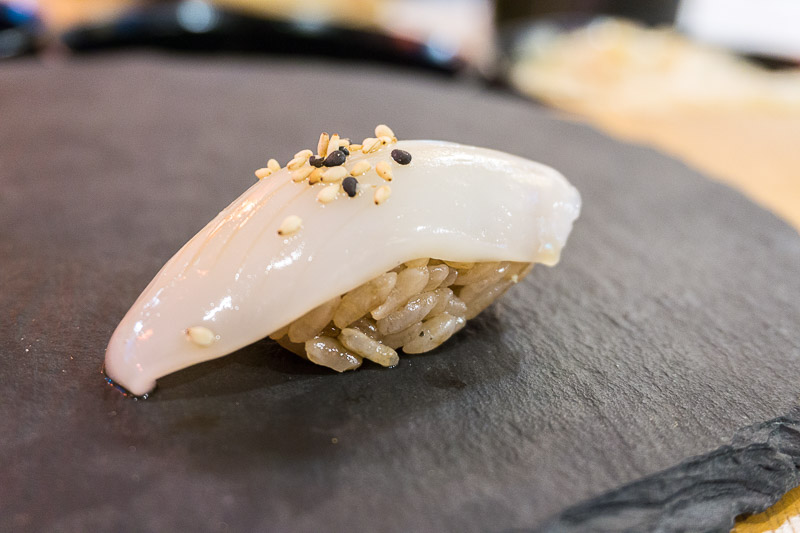 I asked the sushi chef what type of rice he used, as there was a distinct smokiness about the sushi that evening. I knew it wasn’t from the seafood itself, and it turned out that the brown-tinted sushi rice was a result of the rice being mixed in with bread vinegar after cooking.

The shisho leaf gave off an unmistakable floral fragrance that permeated even after our last chew. 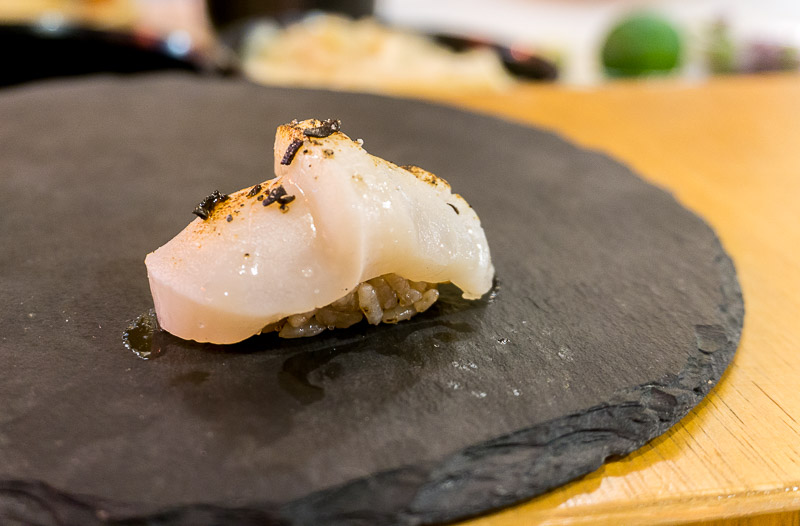 I love a good ol’ blow-torched sushi, which worked extremely well with the Blow-Torched Scallop Sushi, given that the rice had its own smokiness to boot. Its texture was a meeting point between chewy and tender, and it made me eager to wolf down the next sushi. As if I wasn’t already impressed by the sushi so far, their Japanese Seabream Sushi is laced with truffle oil! The result was a decadent bite that carried clean yet savoury flavours. It was the least impressive of the lot, but still sufficient enough to excite my palate. 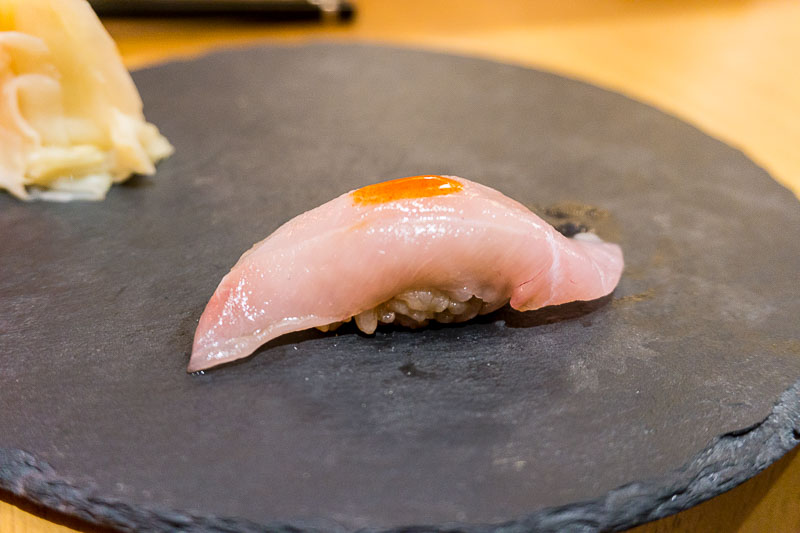 The golden eye snapper in this Golden Eye Snapper Sushi has red flesh and is a more expensive cousin of your regular wet market snapper. It supposedly boasts more collagen, which also heightens its demand in the market.

There was a single drop of red Momiji on the fish, which lent a hint of pepperiness to the slick fish. This single bite serving was a lot fishier than the rest and felt much fattier on the palate than I’d anticipated. 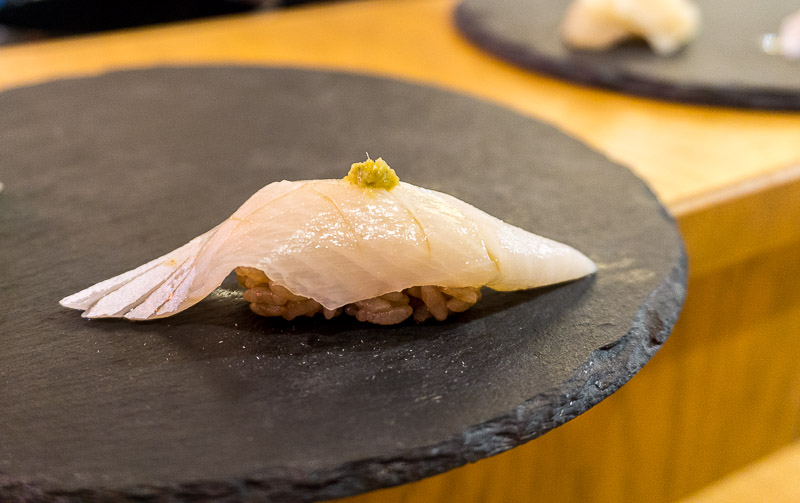 I loved their Hamachi Sushi for the potent citrus pepper that crowned this spectacular piece. There was a meld of sour, sweet, tangy and peppery, all fused into a tiny morsel. I couldn’t believe such innocent-looking sushi could conjure such strong profiles. Trust minka to put a fun twist on a classic. The Tuna With Yuzu Zest Sushi confused me at first. I knew there was more to this than just plain tuna, but I couldn’t put my finger on it.

The yuzu spin did very well to cut through the fattiness of the tuna and provided a nice touch of sweetness to this fish. 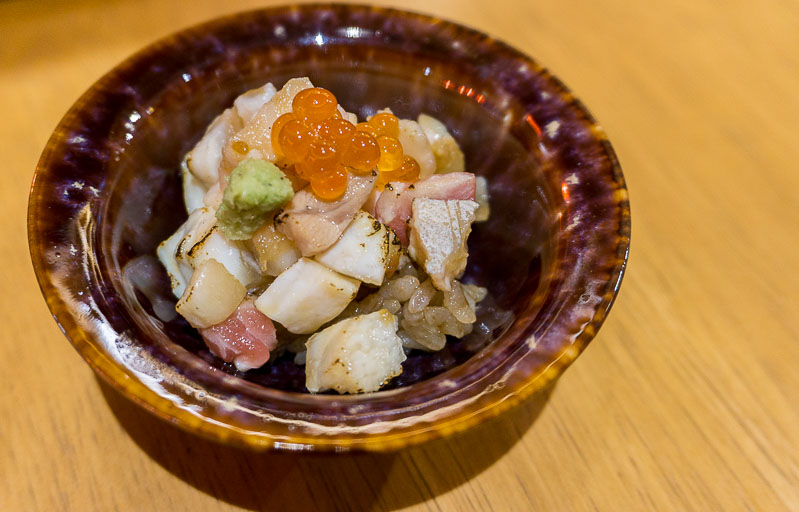 The carb part arrived soon enough but don’t expect a bowl any bigger than the size of your palm. The Sushi Rice Bowl basically was like a summary of all the sushi we’d just eaten, so it was nothing spectacular. 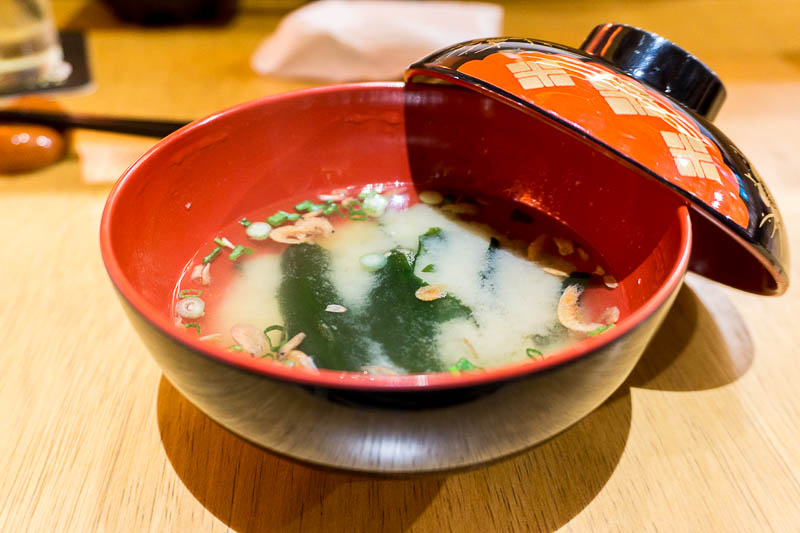 Their Miso Soup is a little different, served with tiny shrimps drifting lazily in a pool of seaweed. The shrimps merely added sweetness but not much robustness, which resulted in a very so-so and rudimentary bowl of miso. 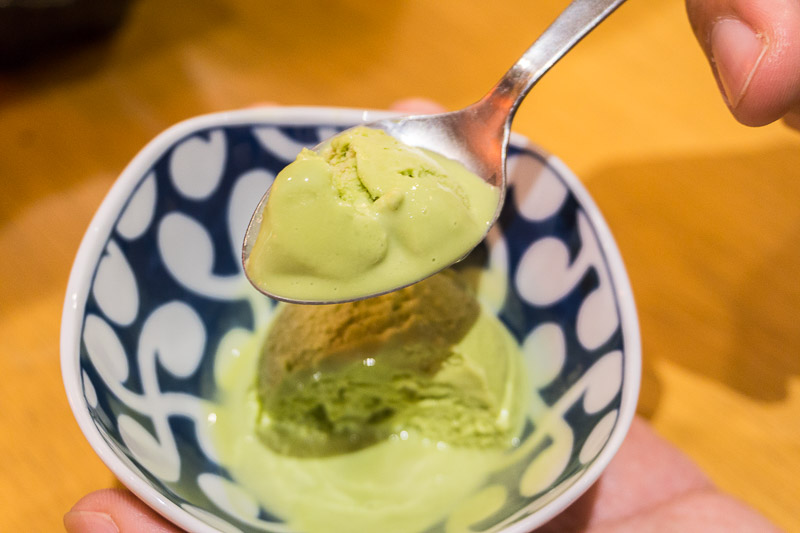 I only enjoy matcha ice cream when it’s incredibly smoky. This one wasn’t. Instead, their token serving of Matcha Ice Cream was watered down and lacking in every way. If they truly insisted on serving a dessert course with this, they would’ve been better off store-bought frozen mochi; I feel that I would’ve had a better finish to my night then.

In spite of the lacklustre end, the S$38 omakase still exceeded my expectations. Sure it wasn’t all bells and whistles, but given the price point, everything was fresh, tasty and actually really satisfying.

I suspect the higher-priced omakase sets would fare even better if their basic tier was already this good. I for one, would readily return and give it a shot.

Expected Damage: From S$38 per pax