Located just a stone’s throw away from Telok Ayer MRT, Miss G’s Grill & Bar is the ideal location for a chill get-together with your friends. 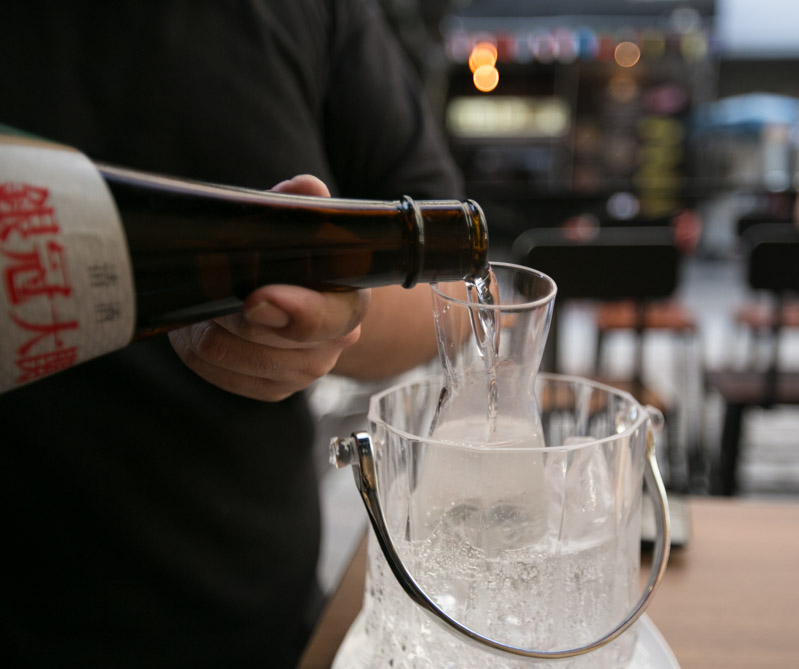 With a fairly extensive range of grub and alcohol — from $40 beer towers to sour plum shots ($72 for a dozen) and wines, there’s definitely something for everyone. 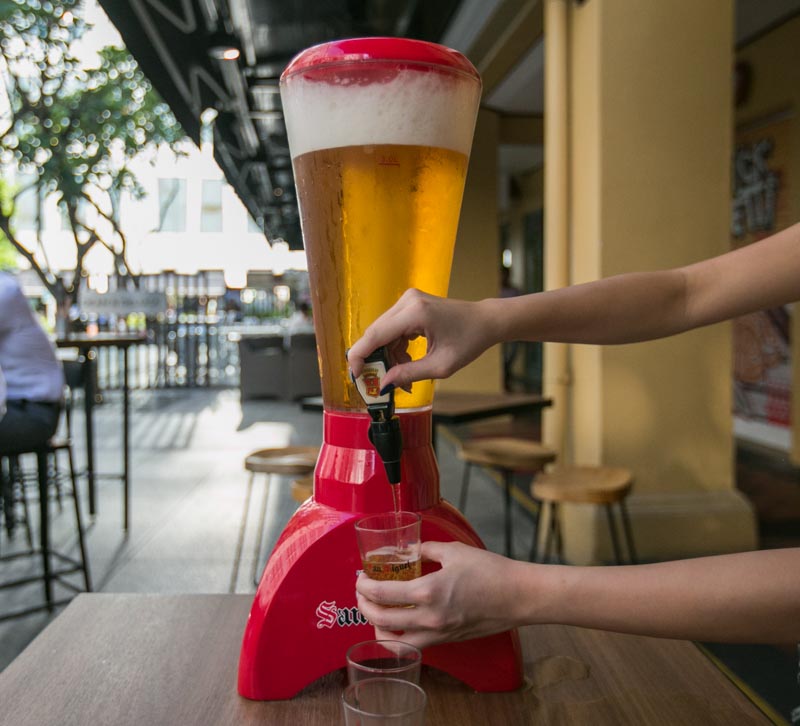 It’s never too early for a pint or two, not to mention if it’s happy hour*! We decided to go with the San Miguel Tower ($40), to get our evening started. 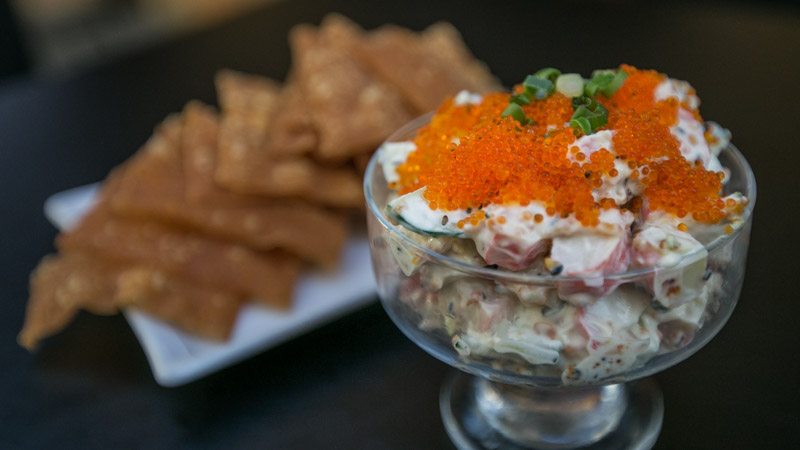 You’re bound to get peckish after a couple of glasses of beer. If you’re bored of having your usual bar bites such as fries and wings, try their California Maki Dip with Wanton Skin ($12).

The dip is a mix of crabmeat, cucumber, avocado and mayonnaise, garnished with some spring onions and a generous portion of tobiko. It’s basically a deconstructed California Maki without the rice or seaweed. 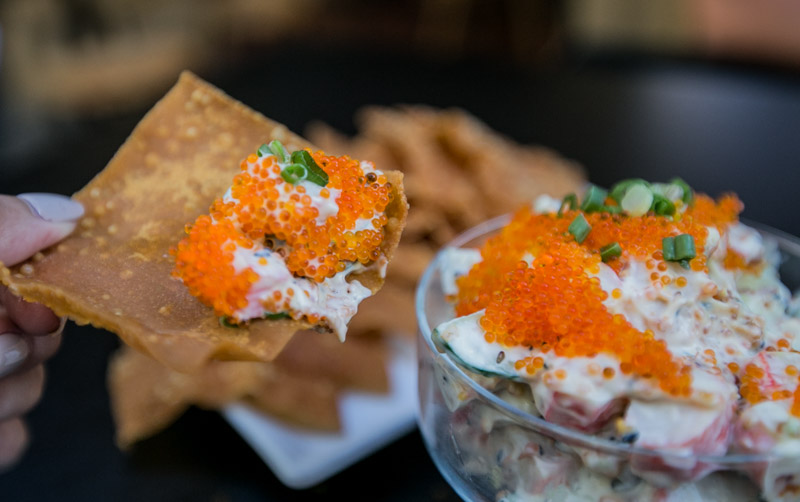 Paired with the crisp, deep-fried wanton skins, it was a simple yet highly-addictive dish. So much so that we even found ourselves fighting for the last piece.

With our appetites whetted, we were excited to see what was in store for us. 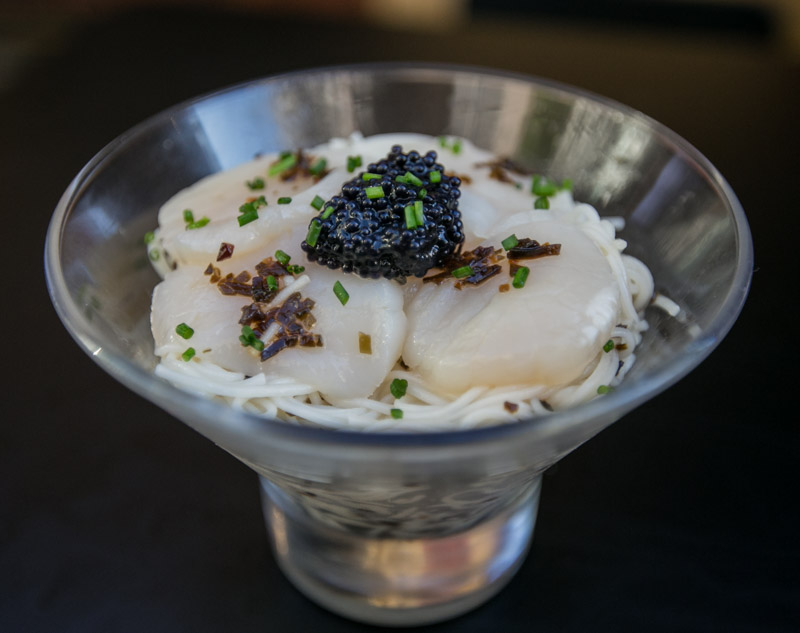 The Cold Truffle Somen with Hotate ($14.90) was the first of the two cold noodles to arrive on our table. The somen, evenly-coated with truffle oil, had a texture similar to that of mee sua.

Atop the bed of noodles, there were five pieces of Hotate (scallop) sashimi and a dollop of caviar. Given Singapore’s particularly hot and humid weather, this bowl of somen was certainly refreshing. However, I felt that the seasoning could afford to be a little stronger as the noodles fell on the blander side.

Nonetheless, it was a pretty extravagant treat, and for its price, I would definitely say that it’s #worthit. 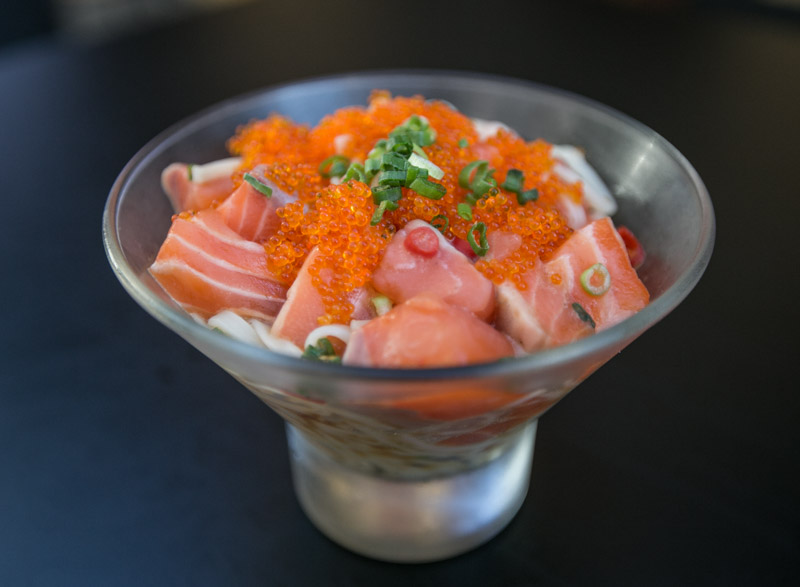 Next up, we had the Cold Spicy Salmon Udon ($16.90).  The flat udon is mixed with shoyu, sesame oil, chilli and a generous serving of fresh salmon sashimi and tobiko. The noodles had a nice spicy kick to it, which fortunately was not too overpowering. 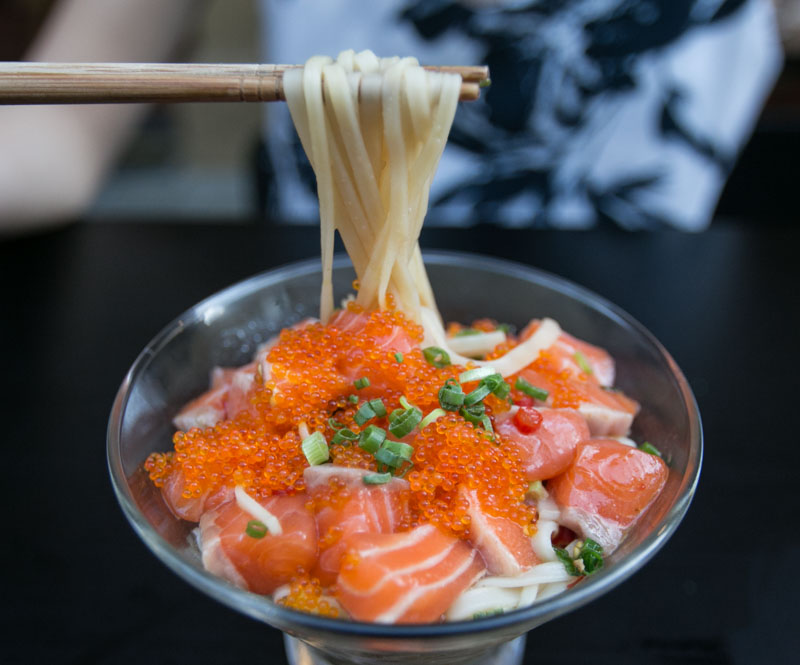 We preferred the texture of the flat udon over the somen, as there was a firmer bite to it.

If you’re feeling ravenous, this will definitely not be able to satiate your hunger. You might want to go for their heartier rice bowls instead. And that was exactly what we did. 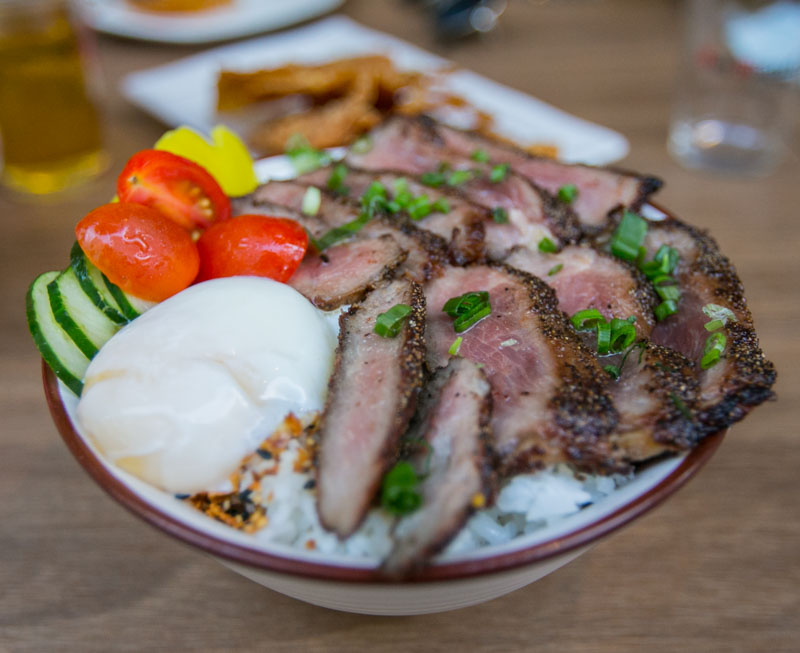 The Truffle Beef Yakiniku on Rice ($16.90) was indeed very satisfying. We loved the well-marinated and tender slices of beef yakiniku. Unlike many other places, the aroma and taste of the truffle were very distinct, and was not lost even after many mouthfuls. 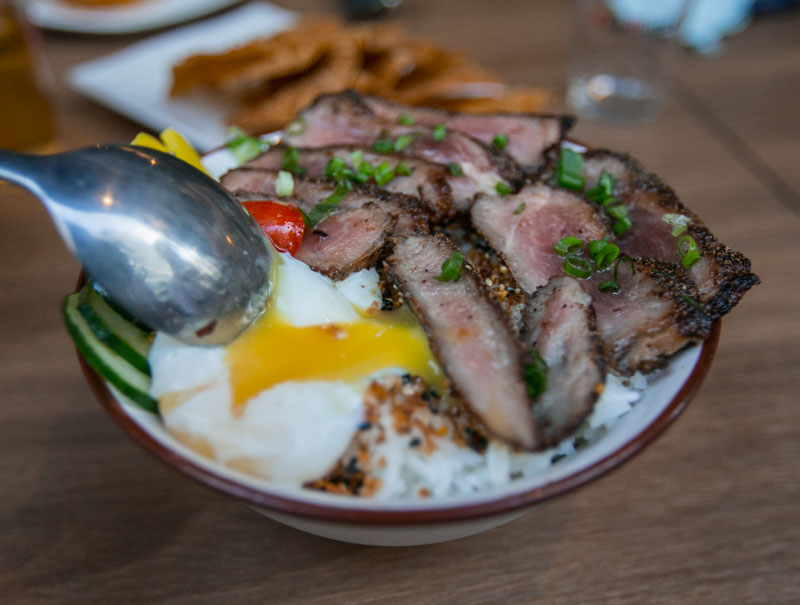 Remember to break into the onsen egg and mix the Japanese rice with some of that creamy goodness. 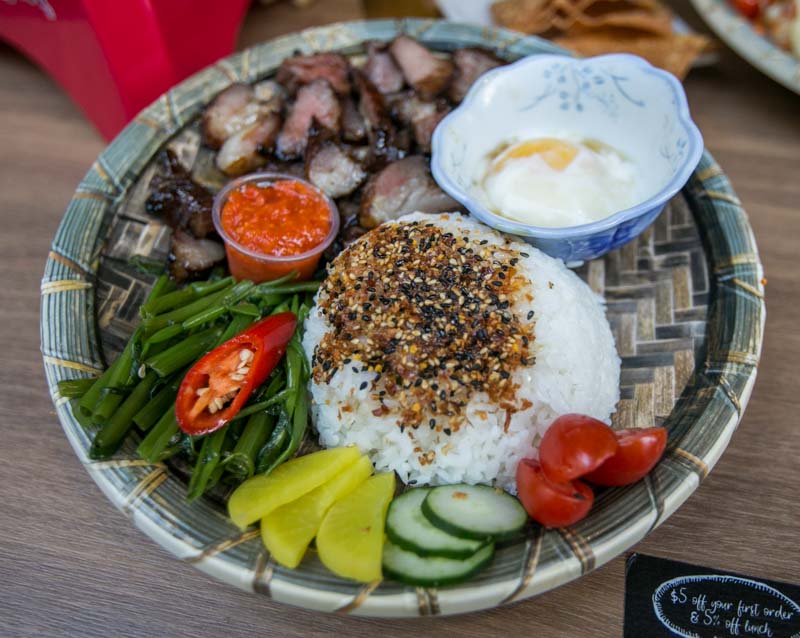 For those craving something more decadent, go for the Iberico Charsiew on Rice with Onsen Egg and Chilled Kang Kong ($18.90). 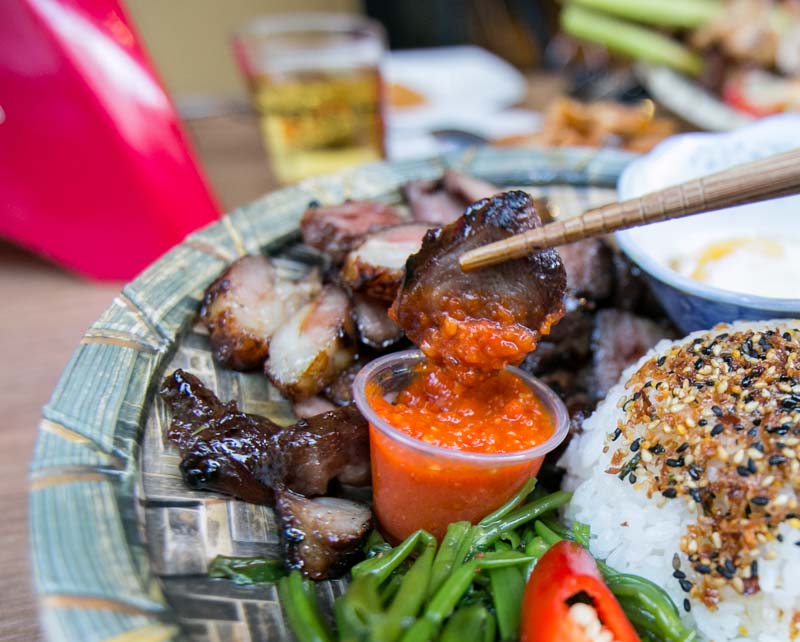 The thick, melt-in-your-mouth slices of Iberico charsiew were juicy, flavourful and left a robust smoky aroma lingering on your taste buds.

For a nice fiery kick, dip it into the chilli provided — which was reminiscent of the chicken rice chilli. 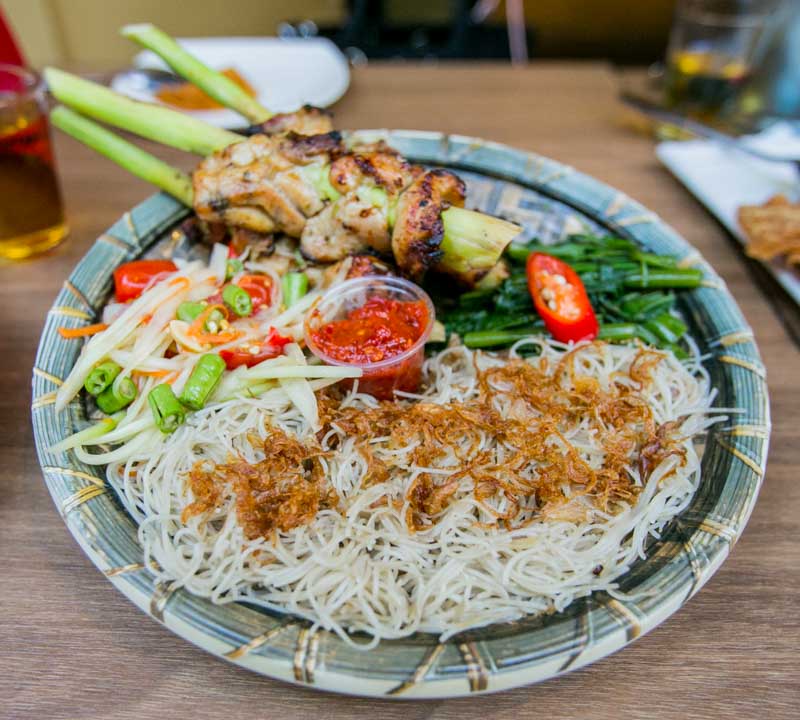 Finally, we had the Thai-inspired Lemongrass Chicken with Brown Rice Vermicelli and chilled Kang Kong ($14.90). 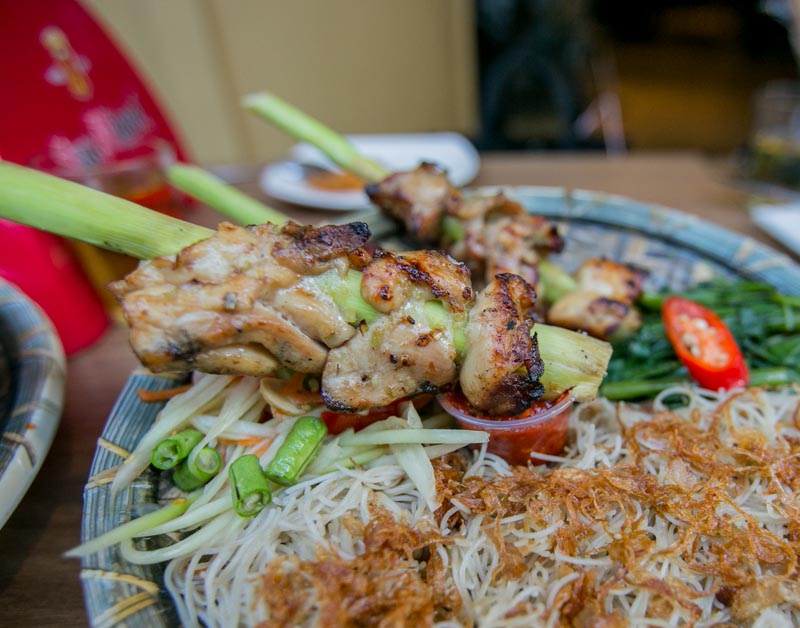 Chunks of chicken are skewered by a stick of lemongrass, allowing the fragrance of the lemongrass to be infused into the chicken upon grilling.

Unlike the previous dish, this one’s served with sambal belacan and brown rice vermicelli. While the sambal belacan was fragrant, we felt that it masked the light and refreshing aroma of the lemongrass. 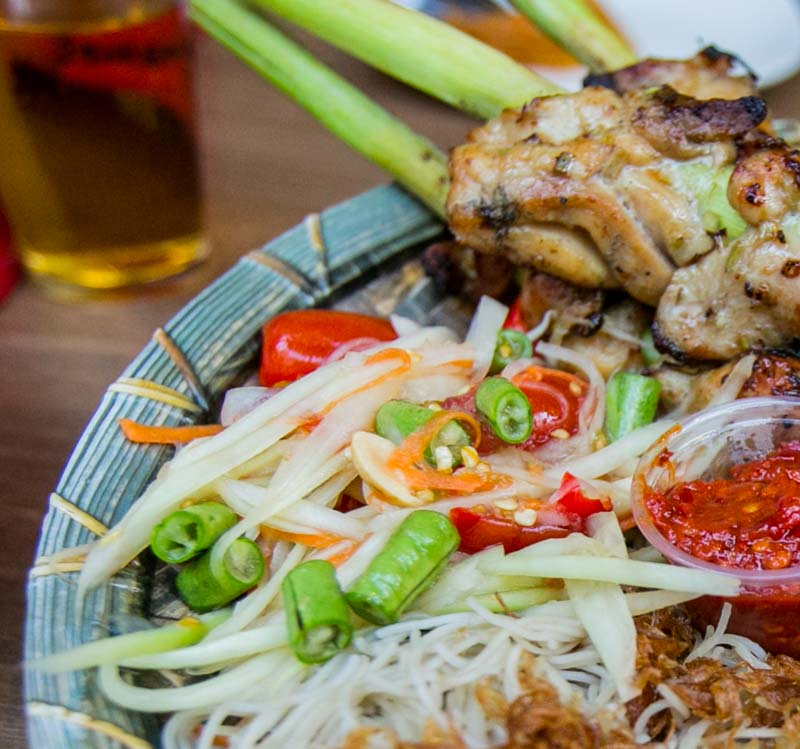 I liked how the appetising green papaya salad served on the side helped cut through the smokiness of the meat.

On the other hand, the chilled kang kong paled in comparison as it was rather bland, just like the brown rice vermicelli. Despite so, I still really enjoyed this dish. Great atmosphere, satisfying grub, decently-priced booze. I’m not sure about you, but I’m pretty sure I’ll be frequenting this place a lot more during happy hours!