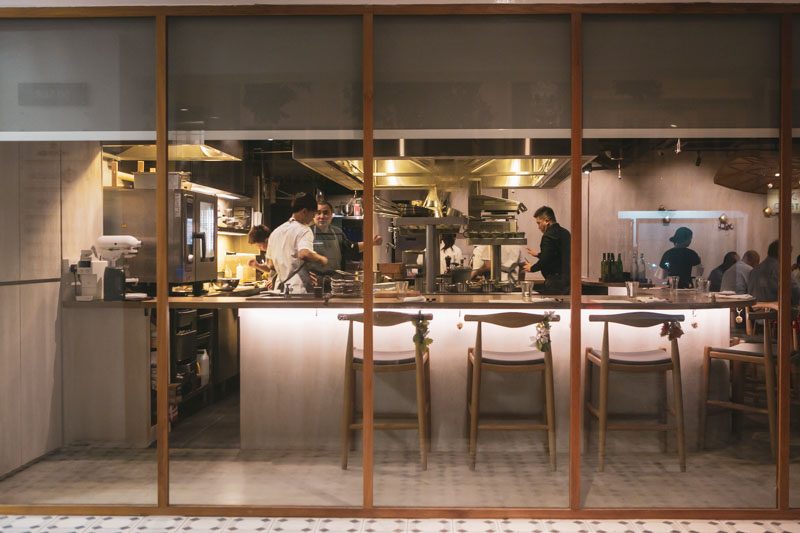 Perplexed about the name Mythz & Myths? So was I.

The first ‘Mythz’ in the titular title refers to the restaurant, while the latter ‘Myths’ points to the hidden speakeasy bar at the back (both restaurant and bar are still connected from the inside). And as you can infer from the word ‘mythical’, a touch of whimsy in the restaurant.

After a slew of apprenticeship in celebrity restaurants including L’Aterlier de Joel Robuchon, Chef Martin decided it was time to strike out on his own. Was two months of immersion in Sweden enough to bring back a legit concept? Let’s find out. The austere Scandinavian interiors within the restaurant give off a sense of space through its stylistic design and natural light coming from the windows. It smoothly transitions from seated tables to the L-shaped wooden counter and over to the open kitchen.

The open-kitchen concept has proven popular these days, provided that chefs are confident of their skills since mistakes will be easily noticed.

There’s quite a small number of seats though, so you can expect it to be a fairly intimate affair great for romantic dates. 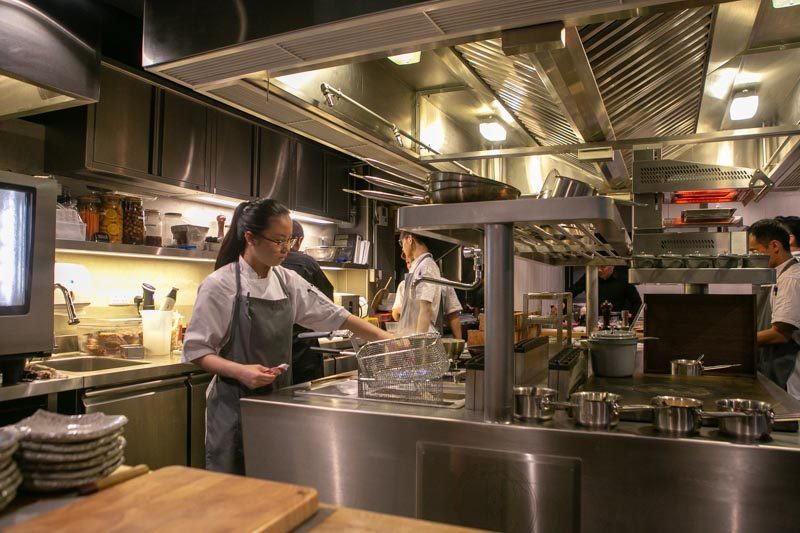 At Mythz and Myths, Chef Martin endeavours to use Nordic cuisine as an interest point, French techniques as his formal culinary experience and Asian touches as a relatable memory in order to come up with an intricate menu. The restaurant runs on a rotating degustation menu much like most fine-dining restaurants.

What exactly comprises Nordic cuisine? Mostly simple ingredients based on their natural freshness, however, there’s a fair bit of fermenting and cured products as well which were historically used as techniques to preserve foods over winter.

For dinner tonight, I went with the 8-course dinner with wine pairing, which sets you back $198++. Without wine pairing, the damage would be at $138++ instead.

It’s going to take a while to talk through all eight dishes, but I feel that’s the best way to showcase this roller-coaster ride. 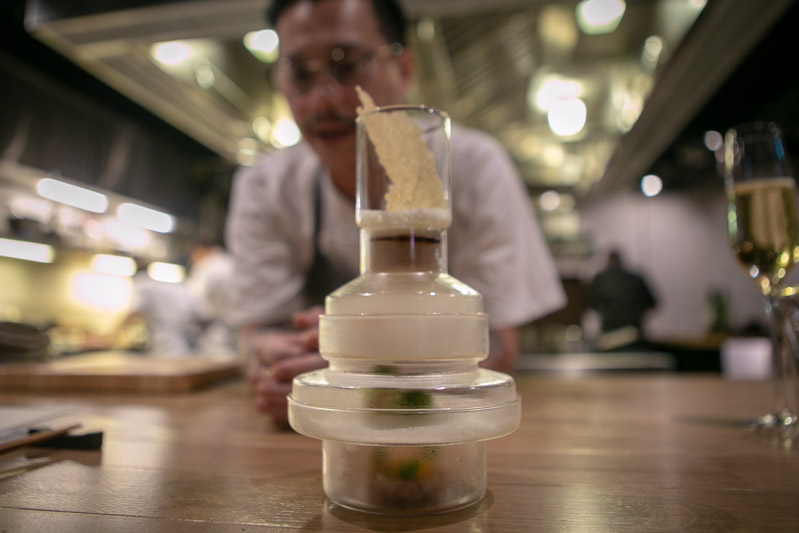 We started with a visually-impressive 4-tiered pagoda of flavours for our amuse bouche. 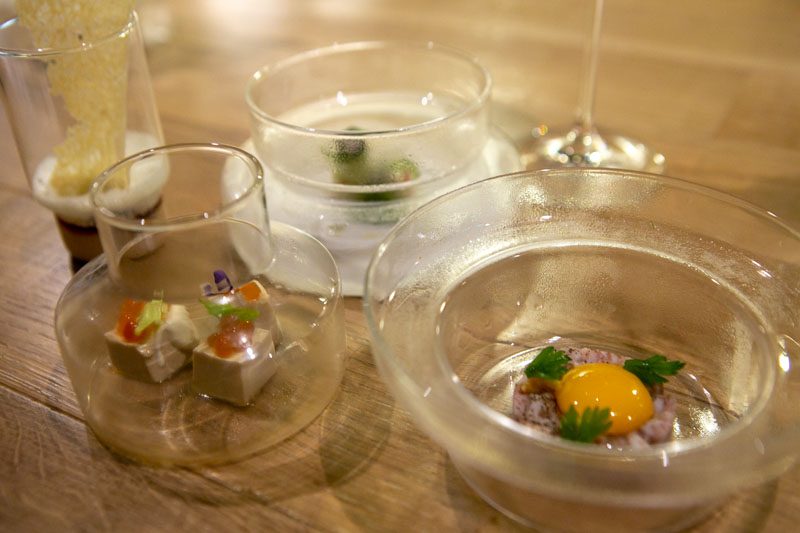 Unravelling it reveals a variety of small bites included smoked tofu with roe and beef tartare. The raw beef tartare with egg yolk created a great savoury mix, but I wasn’t too big a fan of the smoked tofu which I felt didn’t have enough smokiness while the tofu itself was a little rigid. Overall an impressive pagoda display to demonstrate the diversity of Nordic cuisine. 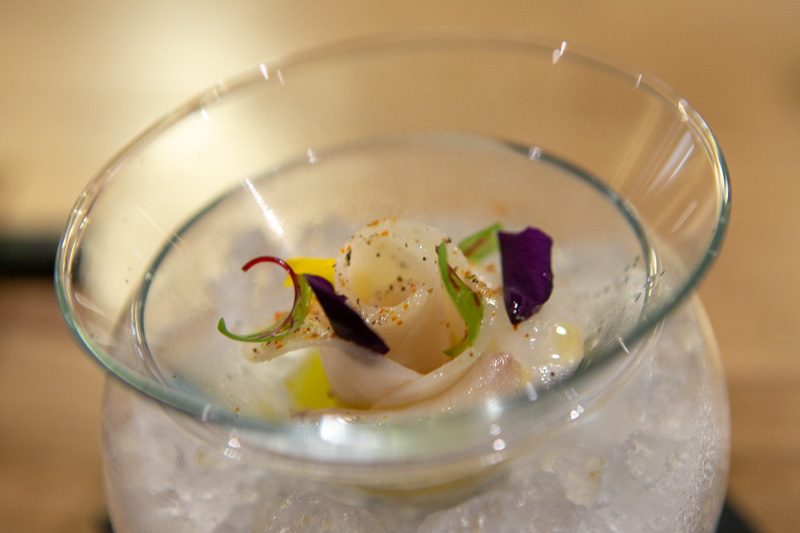 The first course up was this Hamachi crudo which really exemplified the simplicity of fresh seafood with fermented orange vinaigrette for tartness, but generally minimal tinkering. Rose scent pickled kohlrabi (German turnip) also added to a little acidity. 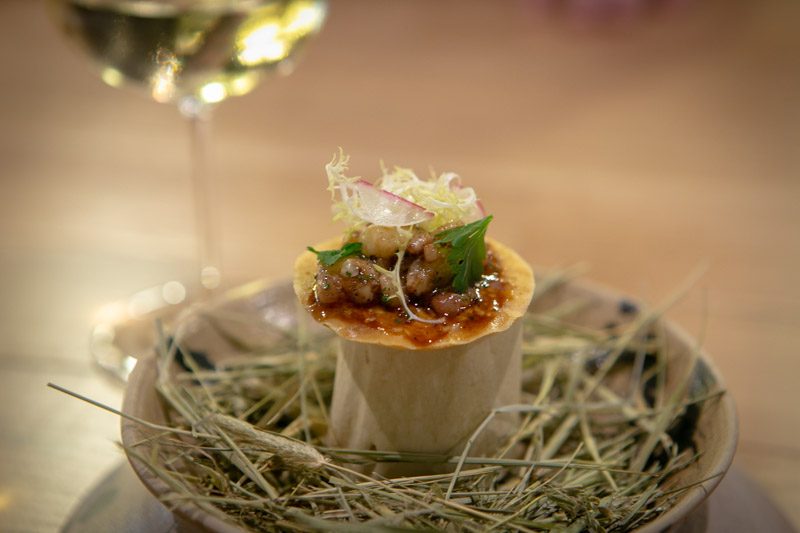 This next Bone Marrow dish was probably my favourite of the night. What we have here is a bone marrow stacked on a biscuit with seed mustard and doused in veal jus. Everything else on display is pretty much just aesthetics.

There’s an explosion of flavours once you pop this badass in your mouth, with layers of umami just flooding in. 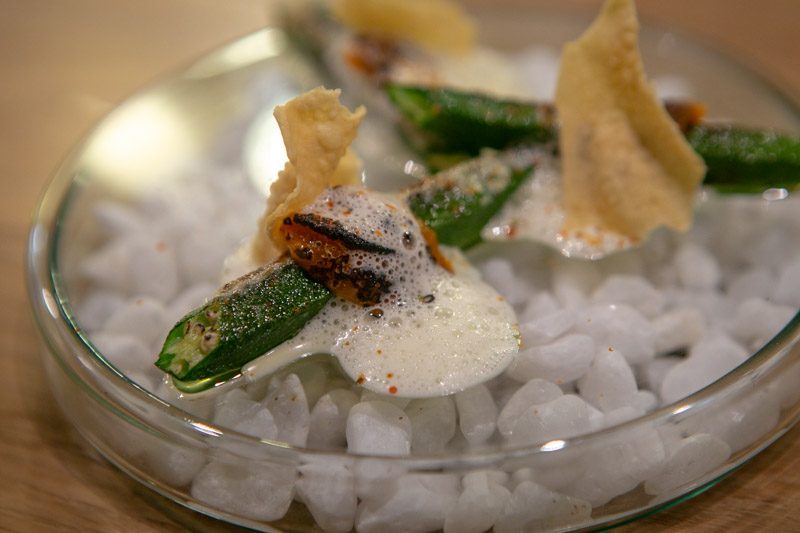 Serving up the Hokkaido Urchin was where I thought Mythz and Myths was starting to lose the plot. Grilled ladyfingers, citrus curried foam,
Japanese egg yolk emulsion, Indian crackers with a pinch of sea urchin.

The premium sea urchin was intended by the chef to complement the texture of the gooey lady’s finger more like a sidekick, but it felt like asking Batman to be Robin’s sidekick with uni taking a backseat. The roles seem to be reversed with the premium product just lost in the background. BBQ – Chinese kale, milk cabbage & broccoli, bbq octopus, Guinness maple, house spice dressing. This vegetable dish just screamed confusion and nothing seemed to add up, including the use of sweet maple with two different vegetables and baby octopus. I just couldn’t wrap my head around this and neither was it exactly Instagram material. After a string of misses, I was excited to try the snow beef next. We even got to choose our own designer switchblade to cut it with. 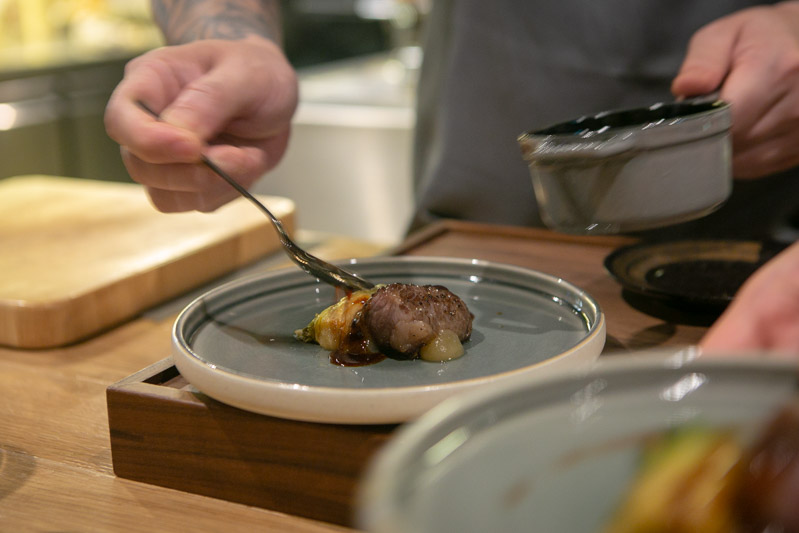 I simply adore beef, and any well-marbled steak can hardly go wrong. Especially if it’s from Hokkaido. 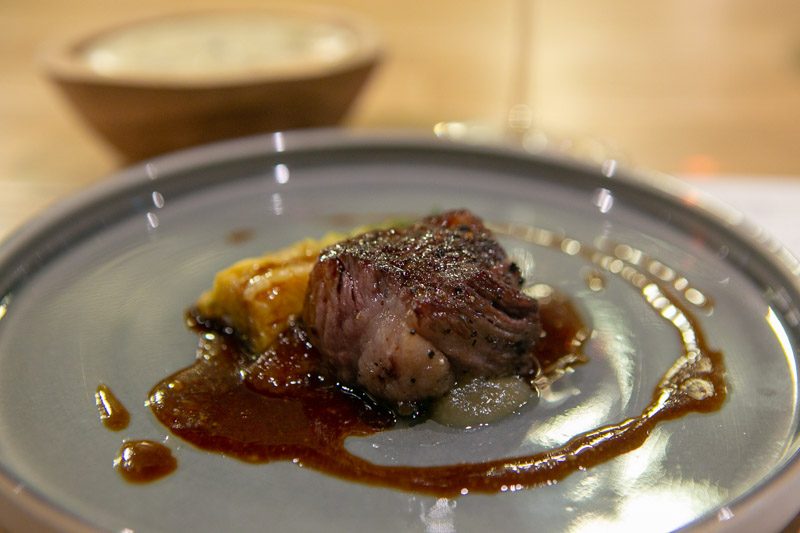 Despite my apprehension, the snow beef lived up to expectations. Rich in flavour and fat with sweetness and acidity from the pear/soy, the snow beef would rank as my second favourite dish after the bone marrow. 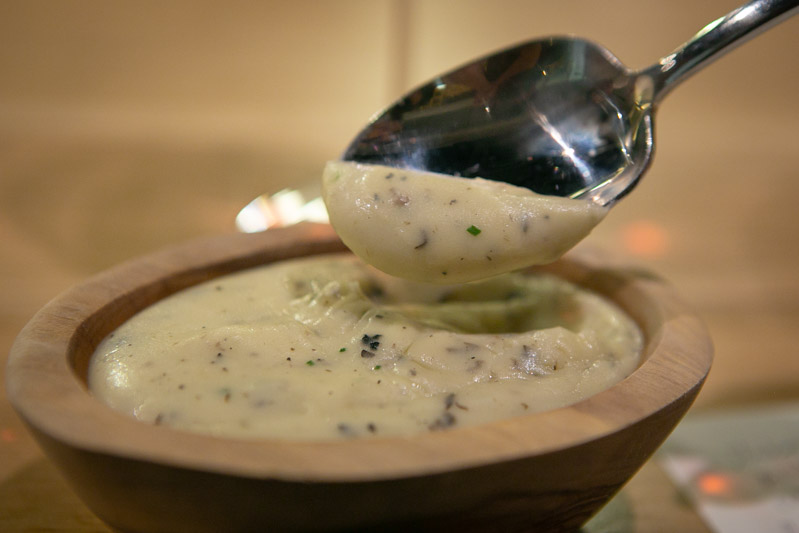 Oh yes, the beef is also served with this amazing mash potato puree that Chef has adopted from his time at L’Aterlier de Joel Robuchon. I kid you not, this is the best potato puree I’ve ever had in Singapore. 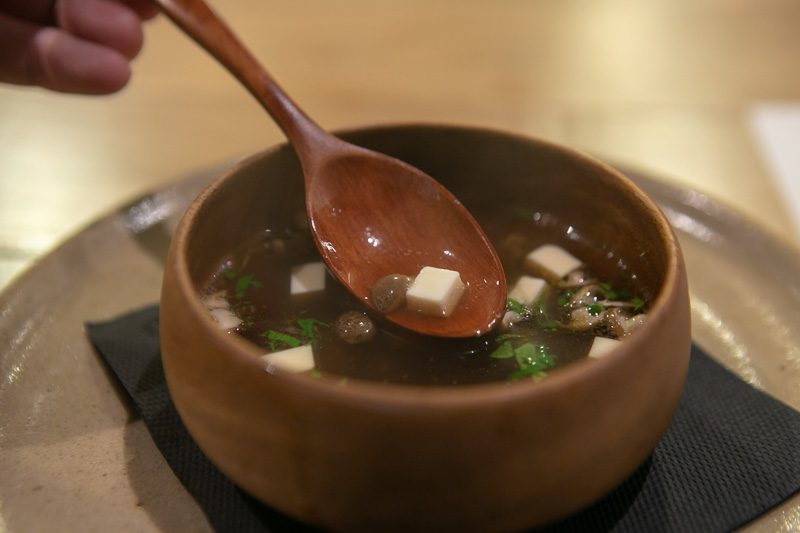 Ox Tail & Wagyu Tea – brown shimeiji, tofu, coriander oil, lemon zest, togarashi. Winding down the meal with a mild broth, this clean tasting ‘tea’ was packed full of umami and was perfect as a transition into dessert. 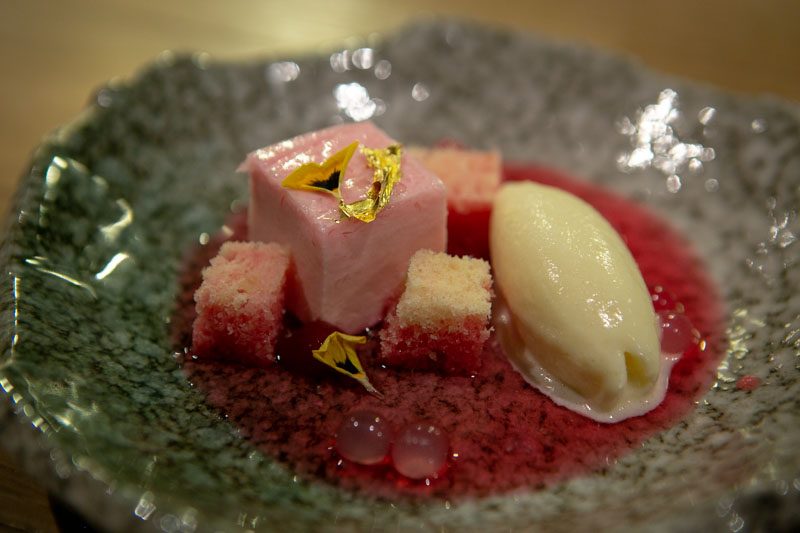 Ispahan – lychee, coconut, fermented raspberry, rose, St. Germain elderflower ice cream. Again drawing on fermentation as a base inspiration for multiple components for the dish, dessert was decent but not exactly memorable. 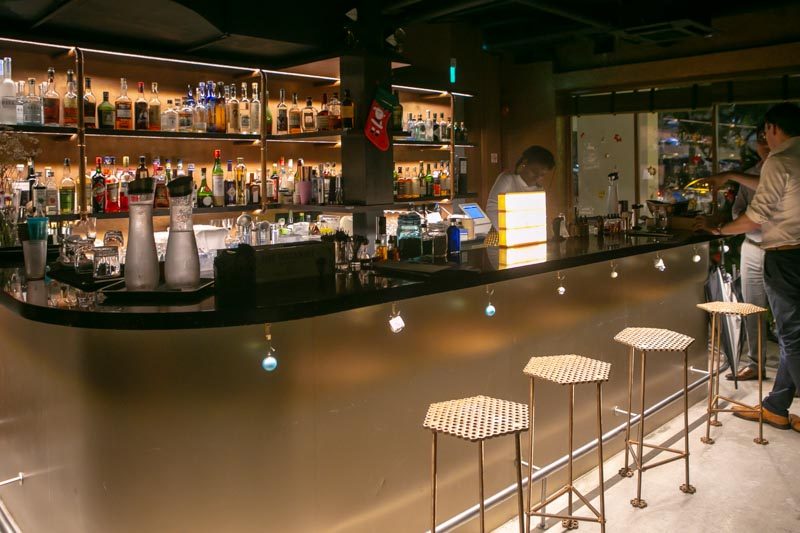 And after dinner, we headed on to the hidden steampunk-themed bar at the back. Head mixologist Darren Lim is in charge at the back and his drinks are more evidently aligned with mythology than the restaurant, with every cocktail having some fabled backstory to explain its inspiration. I’m going to let you guys read the cocktail menu text itself and not spoil any of the backstories, but here’s what I tried. 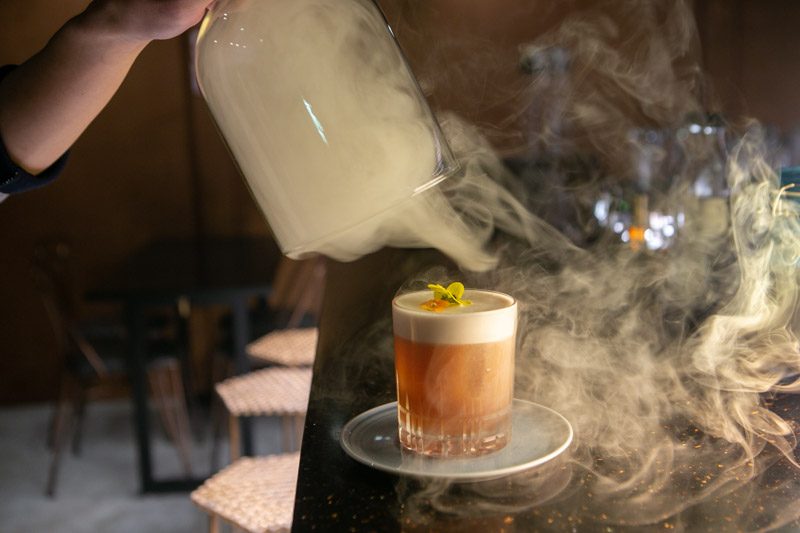 R.E.D ($22) – Mount Gay Black Barrel, Mulled Wine, Lillet Blanc, Lemon. The mix of wines with the rum and smoke added a lot more body and depth which made for a very balanced drink. There’s still that alcoholic kick though, so that’s good news for those of us who have grown numb of light drinks. 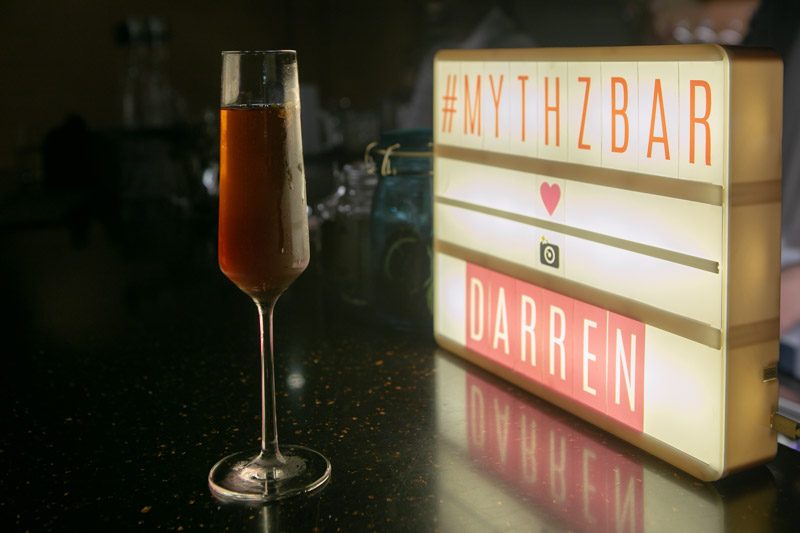 Nyx ($24) – Kilchomann Bramble, Hibiscus, Sparkling, Absinthe. The anise-flavour is quite apparent and made for a floral and herbaceous drink that you either hate or love. Not much people would be on-the-fence for this. 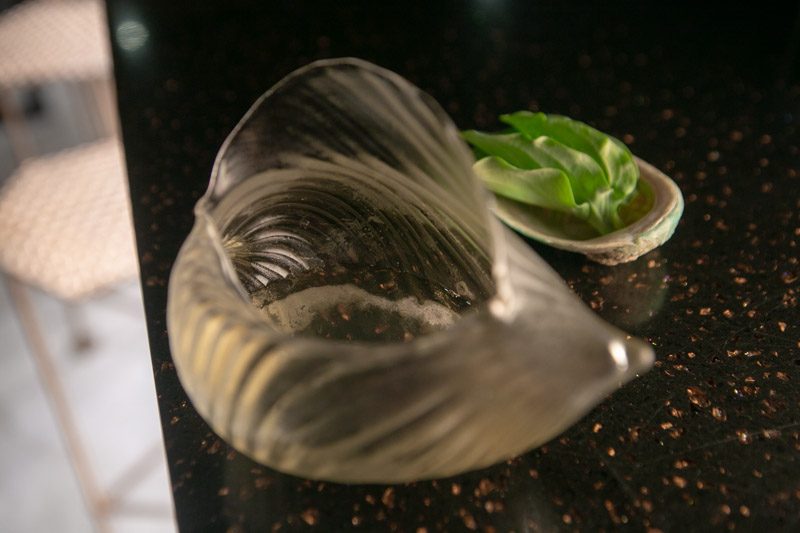 XY ($24) – Reyka, Dill, Kombu, Mancino Secco, Lemon, Oyster Leaf. This umami-driven cocktail provided for a unique sensory experience; especially when you pair it with the accompanying oyster leaf which tastes exactly like an oyster (surprised?).

The whole ocean gushes in with each sip and subsequent bite of oyster leaf which really brings about so much more than an ordinary cocktail. Absolutely a must order if you’re visiting.

At Mythz restaurant, Chef Martin’s dishes can get pretty confusing sometimes and might not exactly be in a clear direction. The mish-mash of cuisines is idealistic but doesn’t seem to come together as envisioned.

There were some hits I enjoyed, but generally, I felt more thought needed to go into the details of creating such an ambitious menu especially at this price-tier. Hopefully, Chef Martin can pull it off after more R&D as the restaurant does hold good potential and in a fairly accessible locale no less. The degustation menu changes every quarter, so who knows what’s next.

The Myths bar is great though and is what pulls up the score of the place – the fixed drinks are punchy yet smooth and easy to savour. Darren has mastered how to create balance in his cocktails. The bar does bespoke drinks as well as carry a decent range of whiskeys, so do check the speakeasy bar out.

Previous articleCompTIA A+ Certification: What It Covers and How to Get It with Practice Tests
Next articlePineapple Tart Cookie Dough To Spice Up Your Chinese New Year From DOHKIE Available Now